East London, Where the Streets are Filled with Art!

Welcome to London. East London, to be exact. A bit of a rougher area of town with a looong working class history. The streets are often a bit run down, but quite vibrant and alive. Alive and covered with art! That’s right: another big city exploration led to another chance to experience absolutely incredible street art! This time we were lucky enough to take a tour with street artist Josh Jeavons of Alternative London. 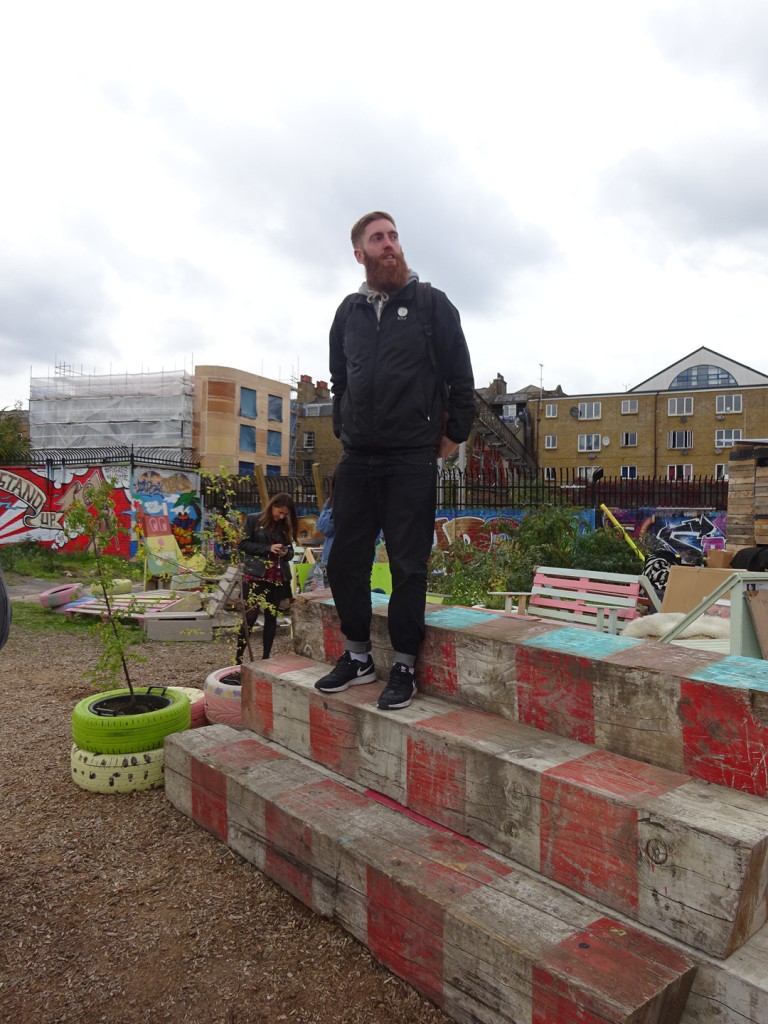 Our illustrious guide, Josh Jeavons. Doesn’t he just look like he would be a London street artist?

London’s street art scene was a bit different from the others we’ve enjoyed (links at the bottom). First off, there are a lot more 3-d works of art hidden around. Everywhere else the focus has been pretty much exclusively on paintings/stencils/graffiti, but London has a number of artists working with tiles, faces, even bronze sculptures! It really kind of blew my mind. 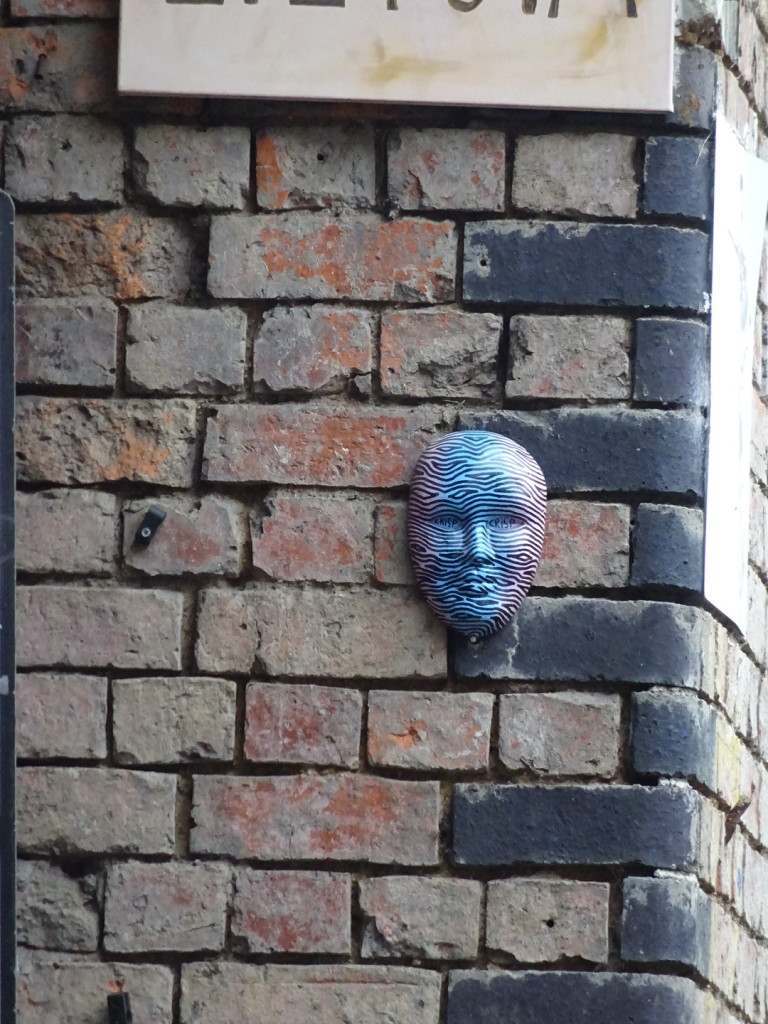 This artist created bunches of these faces, all different, and sent them to London where a team of collaborators put them up. He was never there for the installations! 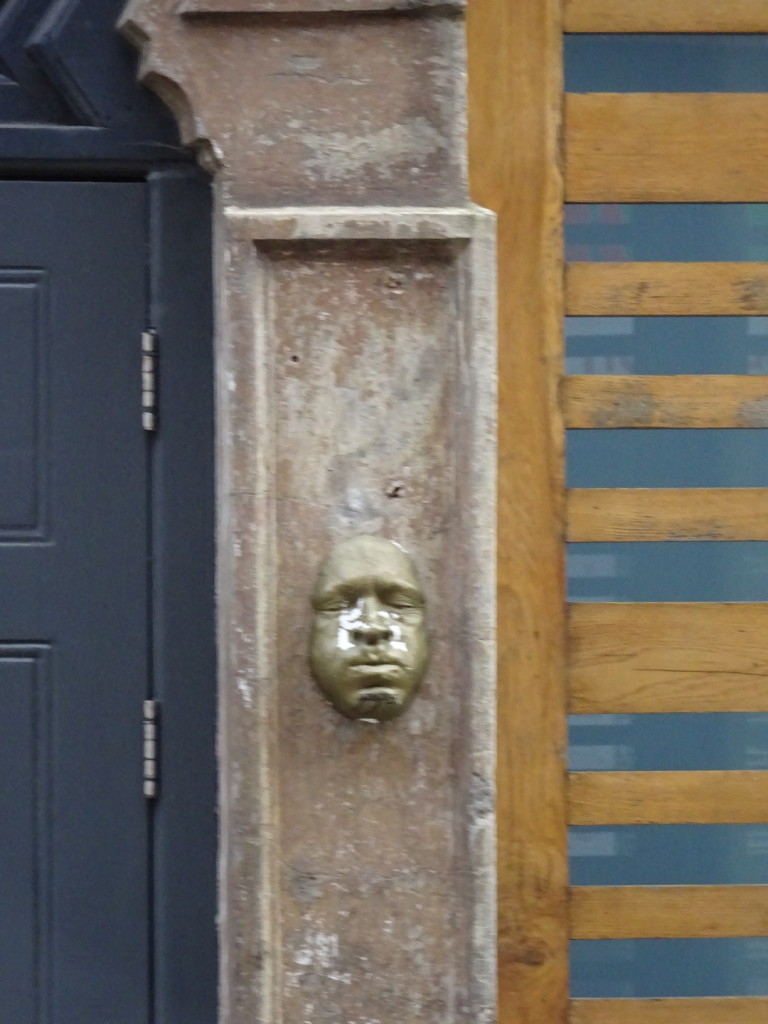 Another face, from the artist Gregos I believe, but don’t quote me on that. 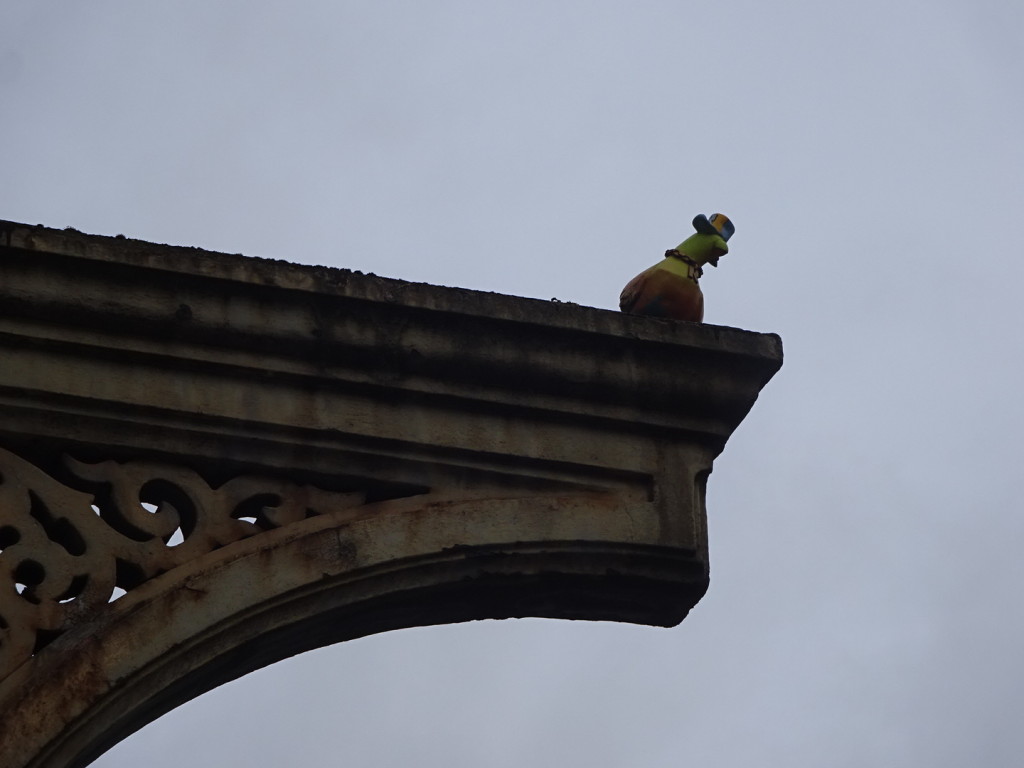 These clay pigeon sculptures started appearing when London hosted the Olympics as a take on the real pigeons. This has to be 30′ up!

There’s a French artist named Invader who travels around the world putting up little tile creations, usually high on buildings, with designs of various Space Invader like characters! They’re scattered most everywhere, not just in London (and not even all on land!). In one city someone mapped out all the different locations they found an installation…and it drew a Space Invader alien! These street artists are truly thinking about their work and the locations they put them – they’re not just someone “feeling creative today.” 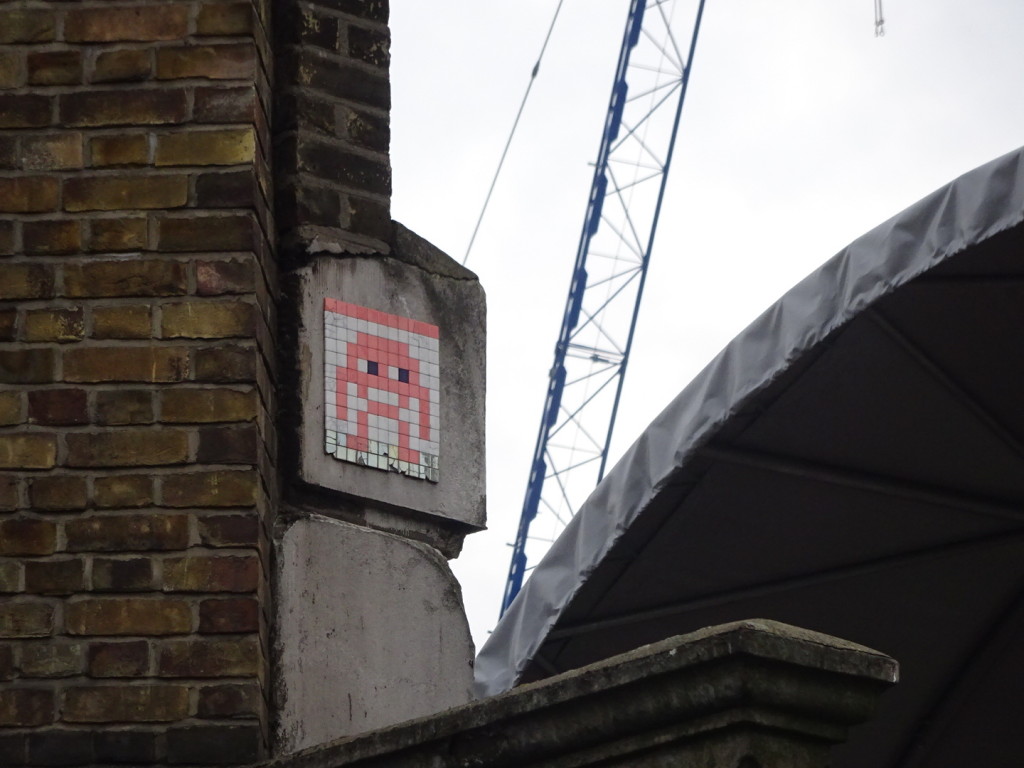 An old, old Invader high on a wall… 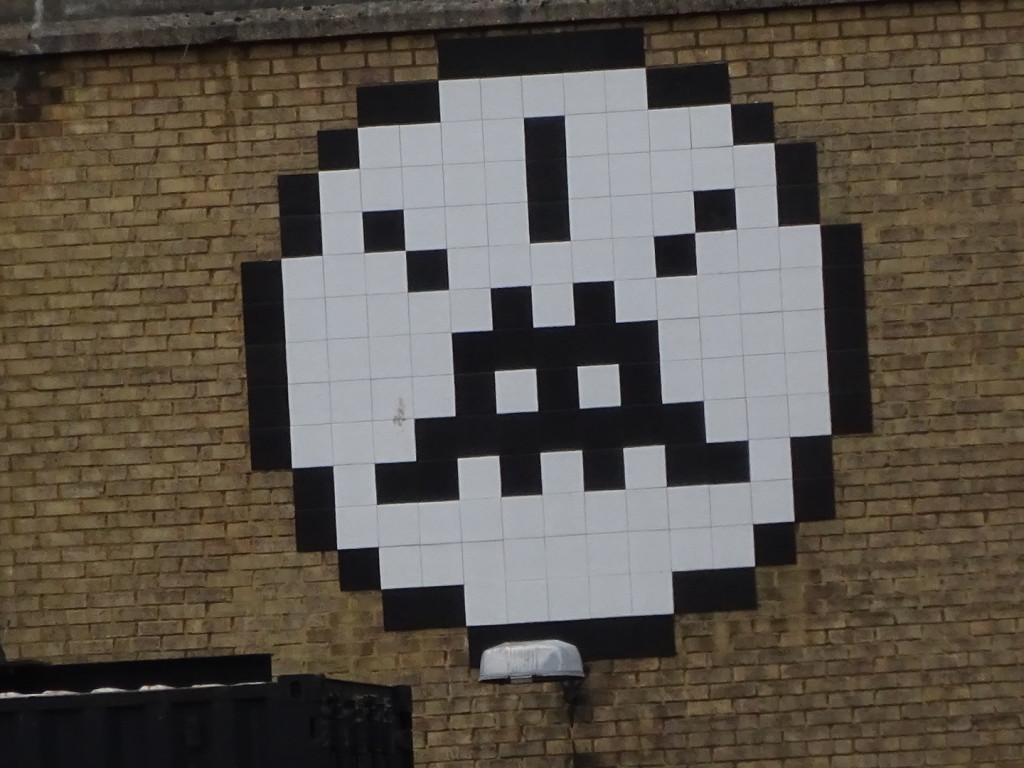 This was a big piece – each of the tiles was probably 4″x4″.

My absolute favorite 3-d artist, though, goes by the name of Jonesy. He creates mostly small, highly detailed, bronze sculptures which he puts up on the sides of buildings or, as we most saw, on the tops of sign poles! What a great place to add art! They are sort of like flag pole toppers, but very subtle and most of the time folks walk right by them without looking up enough to notice. Absolutely gorgeous work! 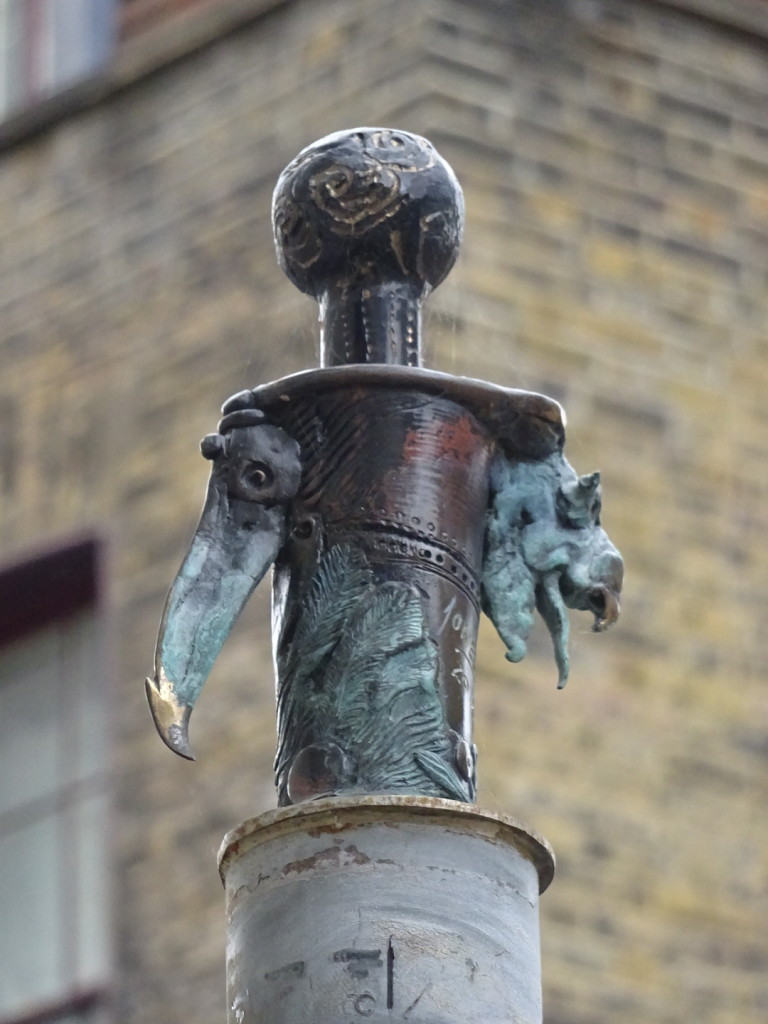 Think of the work it took for Jonesy to make this! And then to just put it out on the streets free for all to enjoy (if they notice it) – love it! 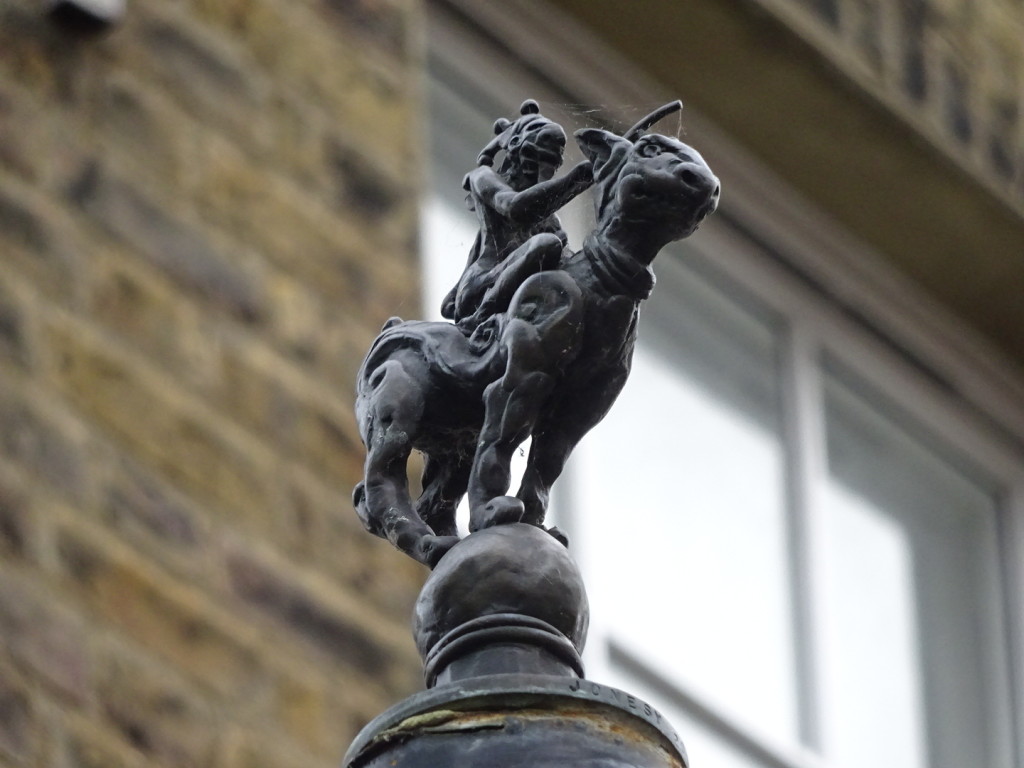 Such fanciful designs, but great detail. 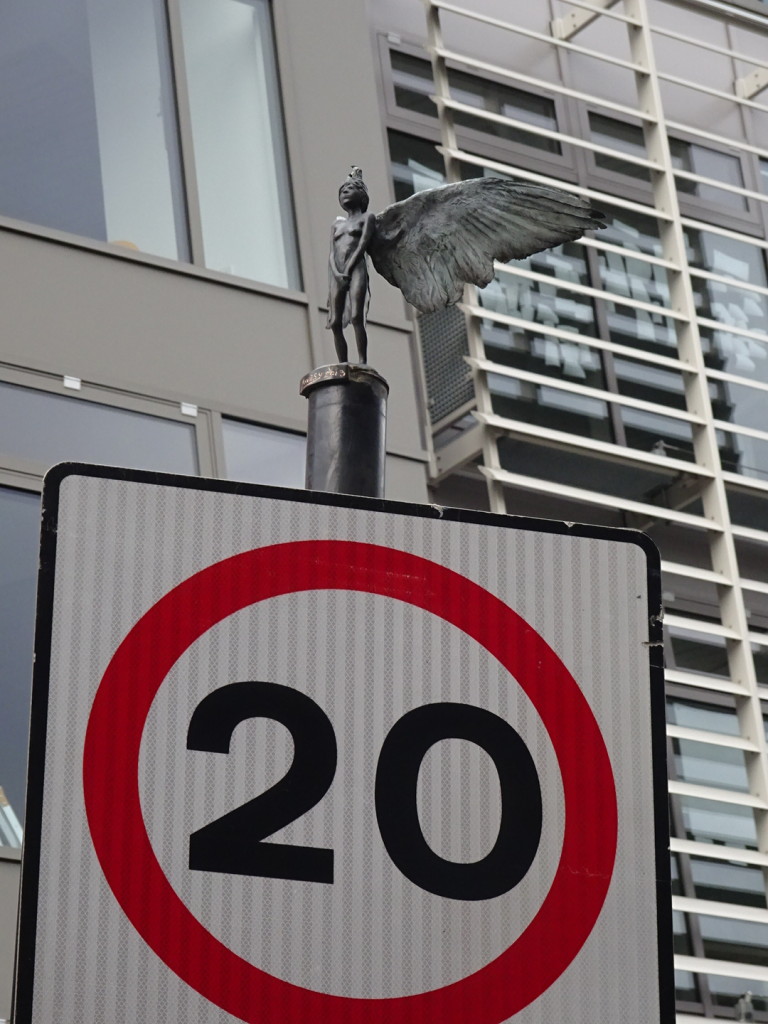 The wings of this one were actually cast from a dead pigeon! Thought I’d post this shot so you can see how Jonesy’s pieces look on their sign posts. Shoot me an email is you’d like to see a close-up. 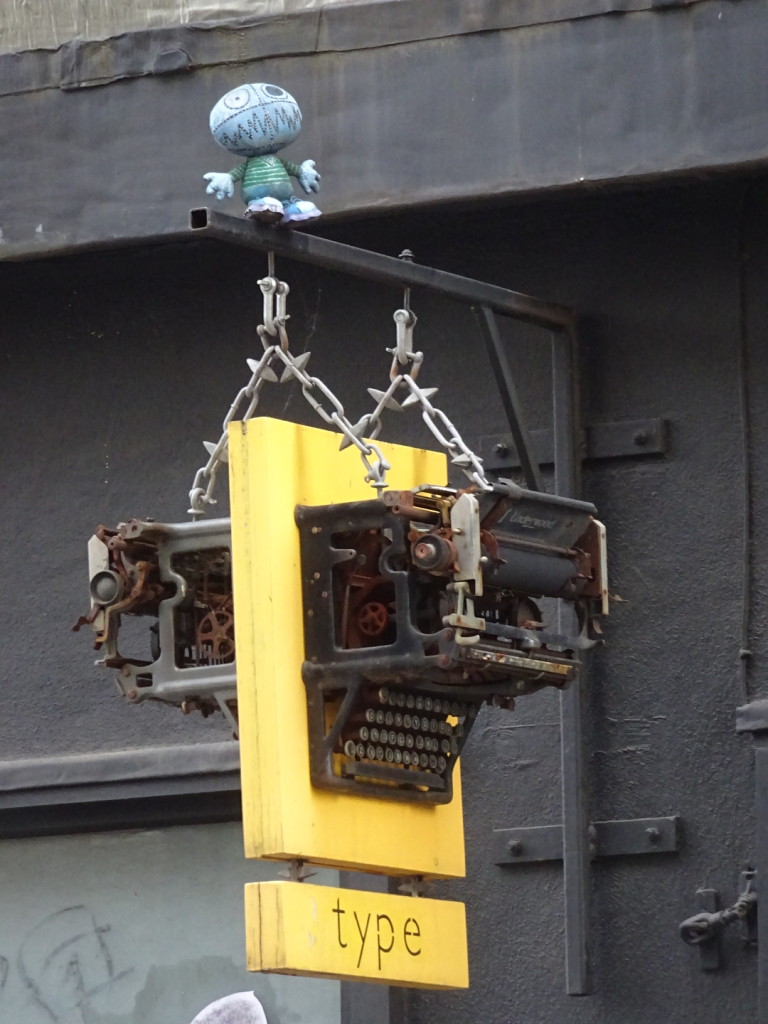 Not sure if this is actually a Jonesy piece atop this sign for a stationery store, but I sure liked him!

And, if you like artwork and signs, you have to like the work of Clet Abraham! Rather than paint, he creates stickers which he can then put up really, really quickly. These are two we saw, but click the link or Google him for a lot of really fun pieces. 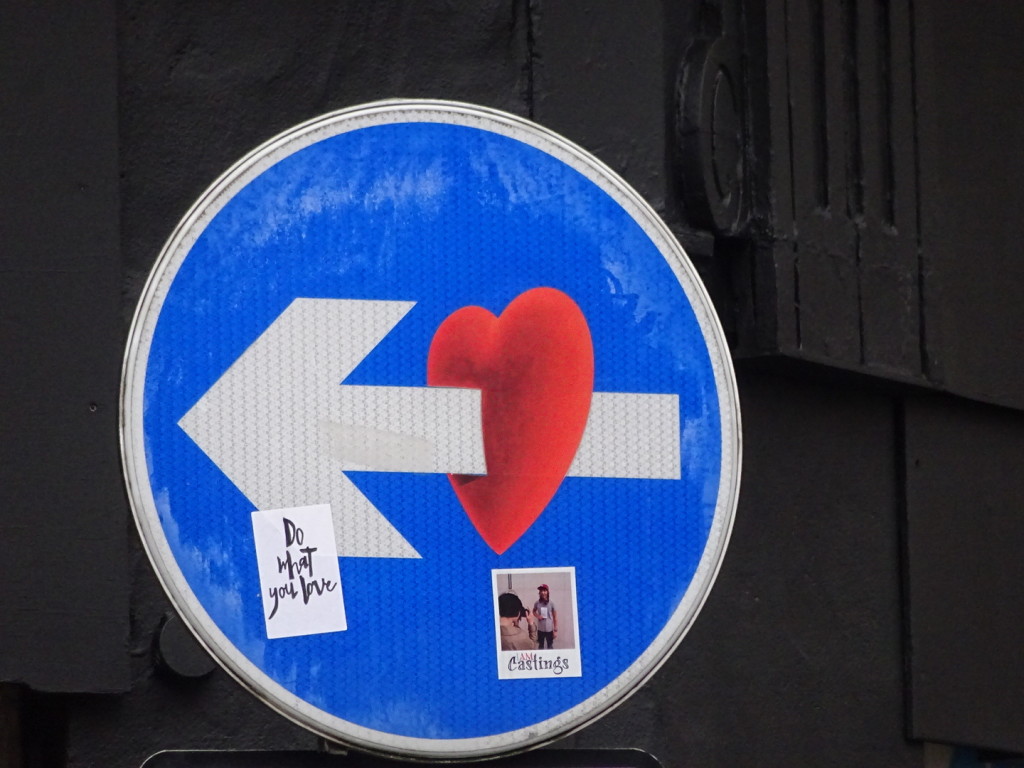 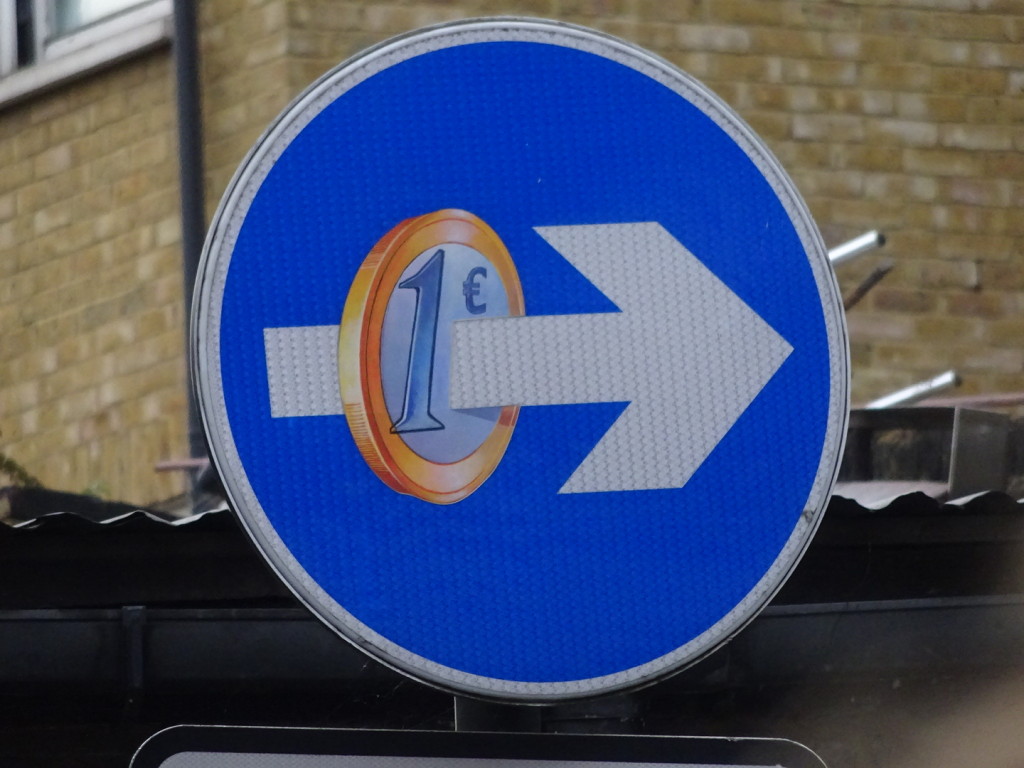 How do we get to Wall Street?

Another thing I noticed in East London is that there were a number of spaces where artwork covered over each other. This didn’t seem too common in other cities where folks sort of respected the works that already existed and only painted over if the original piece was pretty much worn away (well, not counting if the building owner painted over it themselves, of course!). Not sure if this is due to there being so many artists in London or limited space or just the character of London street art, it was just something I noticed. Makes me realize, though, that some of the pieces I’ve photographed won’t be around for too long. Street artists accept that, but it’s interesting to me that as a photographer I may now have some of the only evidence theses works existed. 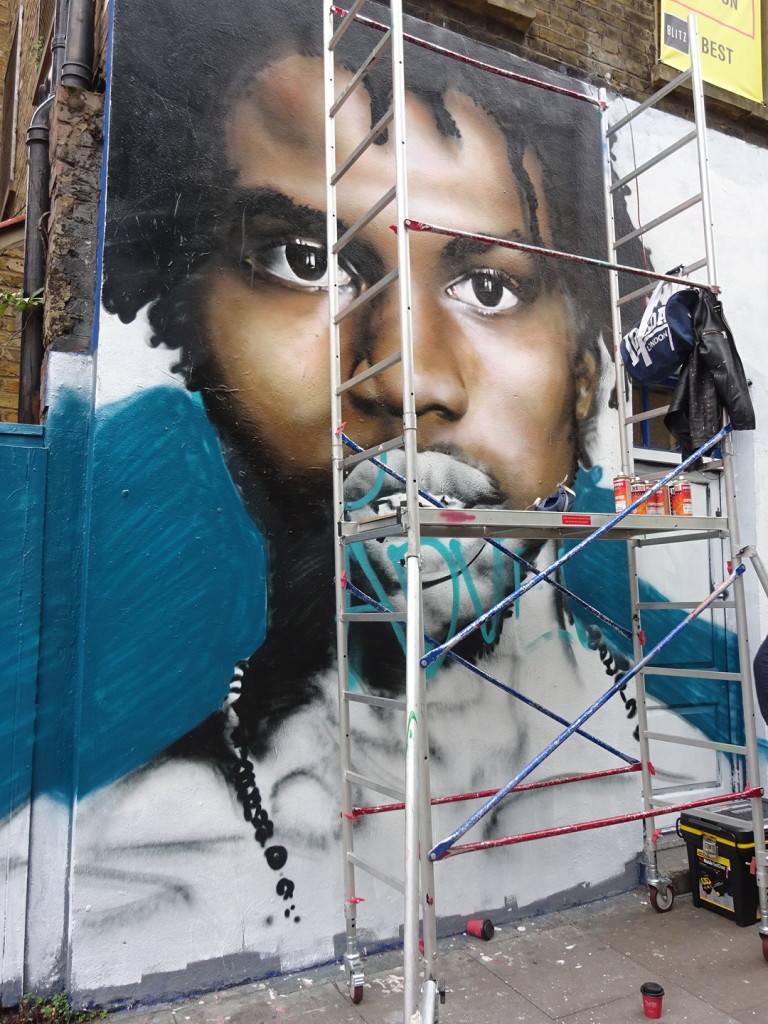 New pieces are going up all the time…

I apparently didn’t take any photos, but one of the other different elements I found in London was the number of works that were low to the ground. Hmm, actually I guess I should say the number at varied heights as Invader and Jonesy’s pieces are usually quite high up. Anyway, there were a few artists working down at shin level so often you don’t notice them if you aren’t looking. In fact, we even found a bridge where some artist or group had painted a bunch of little alien snake like creatures between the metal slats! These couldn’t be more than an inch or three or around, but there had to have been at least 100 of them over the bridge!

For the first time we came across a piece by an artist we had seen on one of our other tours – Martin Ron from Buenos Aires (link at bottom). Fun to realize we’re starting to recognize a few artists! 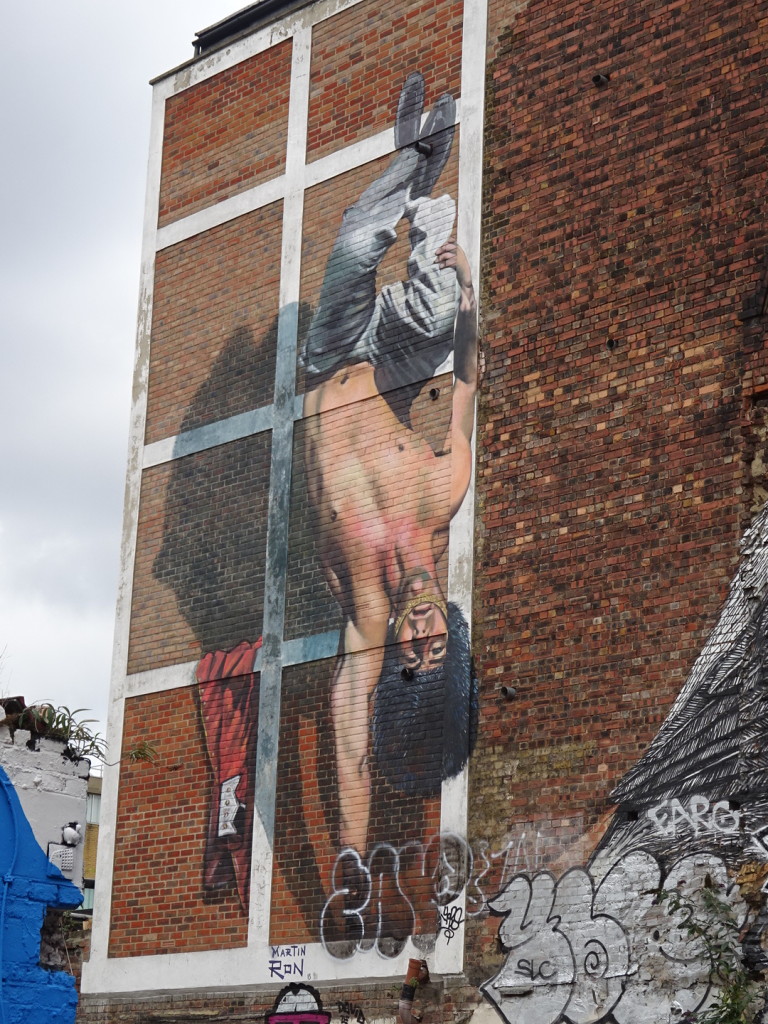 This Martin Ron piece is in line with the giant skate boarding design we saw in B.A.

One artist, Stik, makes pieces that look really, really familiar, but I’m not sure if we actually know his work or just imitators. He often creates paintings that are connected to the community area for each piece. They all have a message like the one below. Great story: when Stik was starting out he decided he needed to do his work fast so as not to get caught (like most street artists). Wanting to make figures, he realized the fastest possible way he could do things: create each person with only 5 lines, a circle and two dots. Pretty amazing and you could see how he could complete a piece like this in mere minutes. Now he’s often invited to do his work. 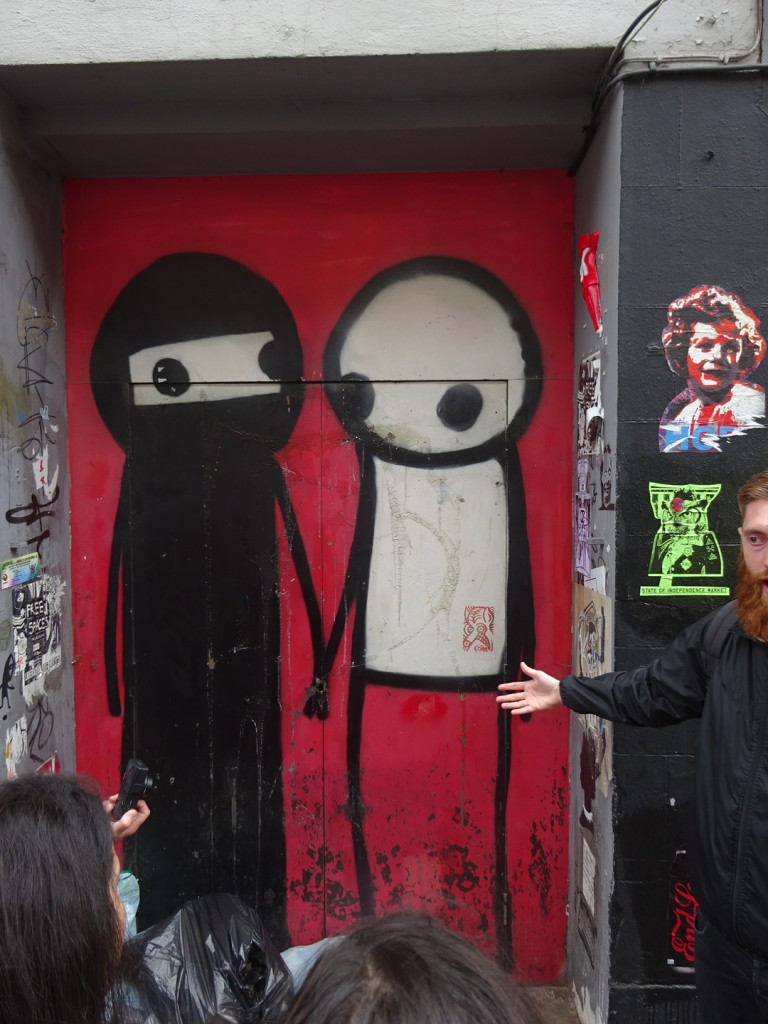 Stik created this piece in a Muslim Bangledeshi neighborhood to emphasize peaceful Muslim/non-Muslim relationships. The community has embraced this piece and it’s lasted for over 5 years now.

Those are some of the biggest names for me, but there were a LOT of pieces I liked. 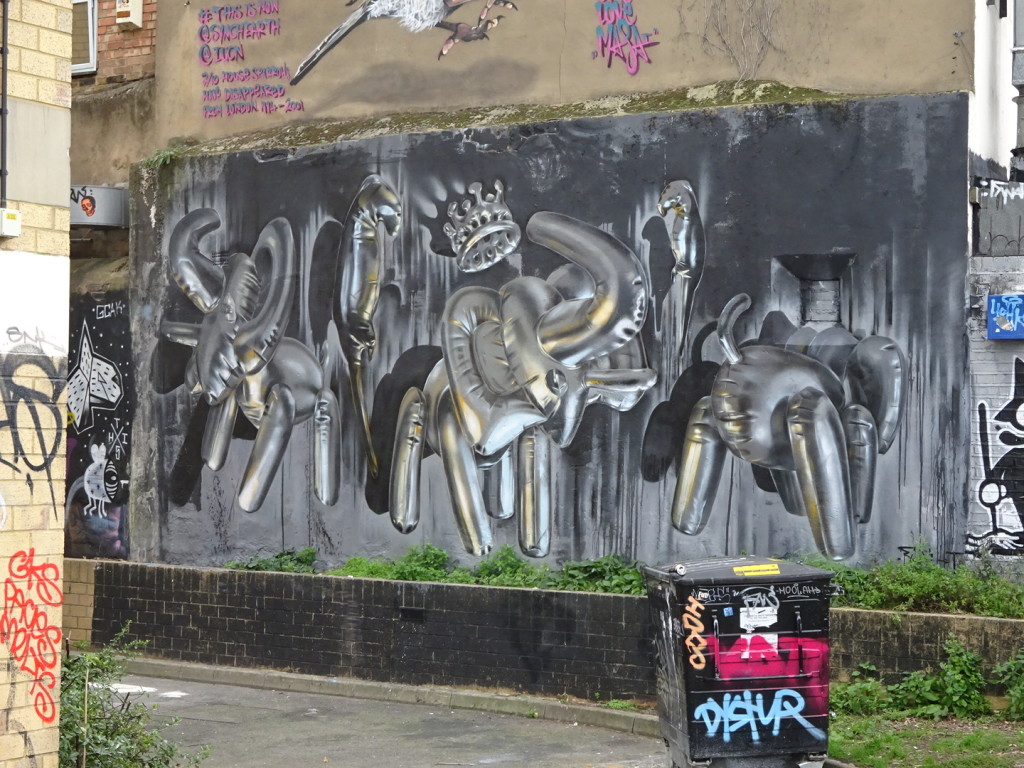 Hopefully it shows in the photo, but these were amazingly 3-d. 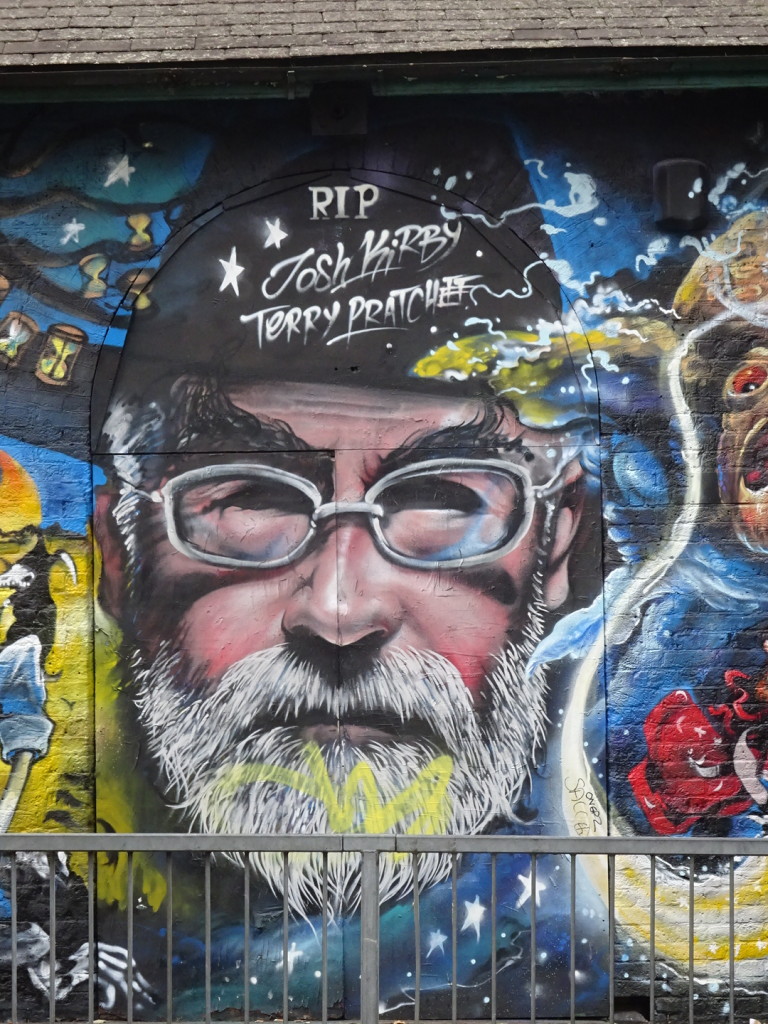 This was just one small part of a blocks-long mural, but I had actually been reading a Terry Pratchett novel at the time, so I had to take the shot.

Don’t we all have a little koala inside us? 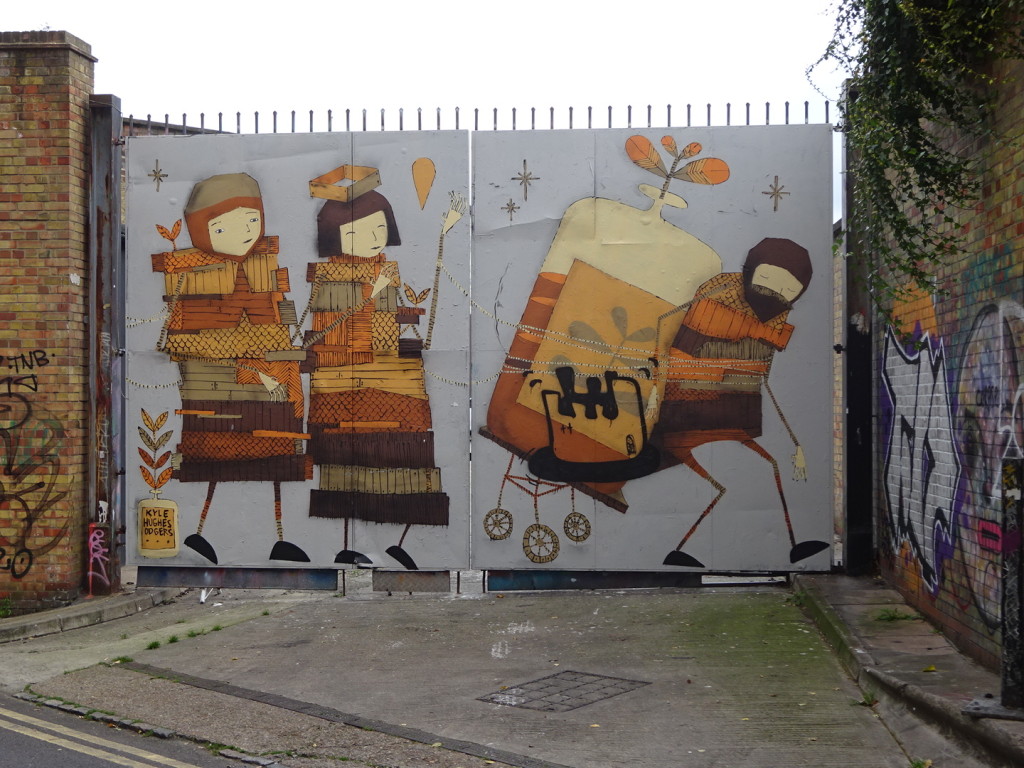 One of Anner’s favorites – I’ve caught her doing sketches of these guys bunches of times now!

Can you believe this was done only with spray paint??? 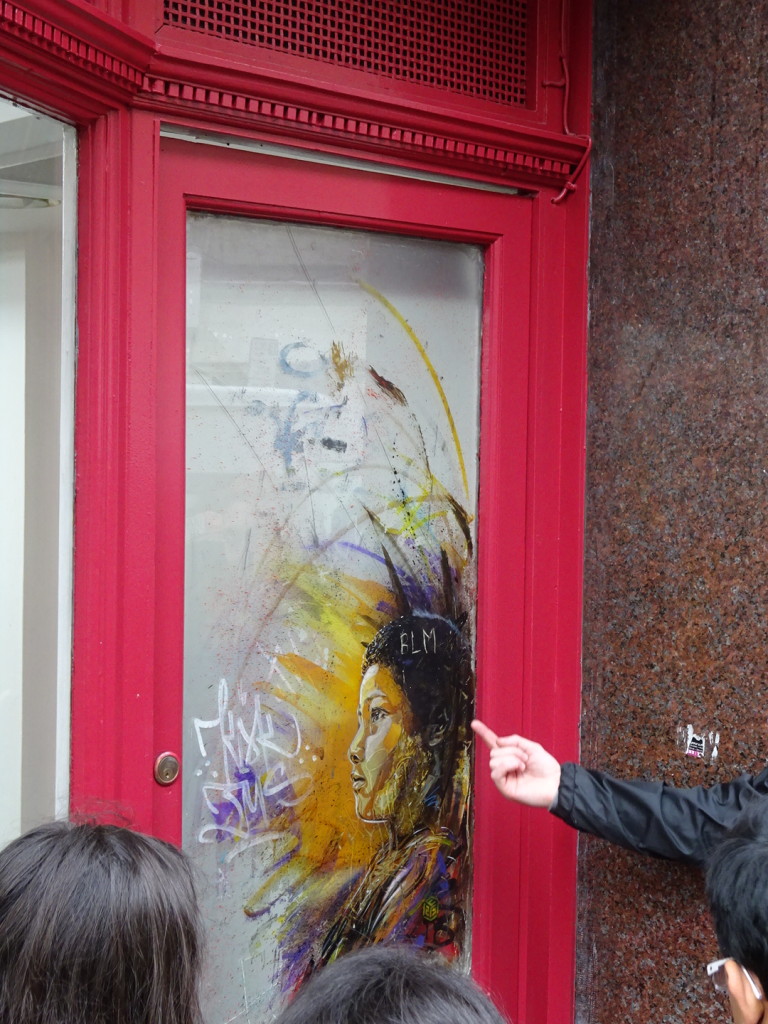 This painting was done on the main window of a barbershop. The owner decided he couldn’t keep it there as it blocked the view, so he had the glass removed and put into the door where it remains today! Truly wonderful when a community accepts and artist! 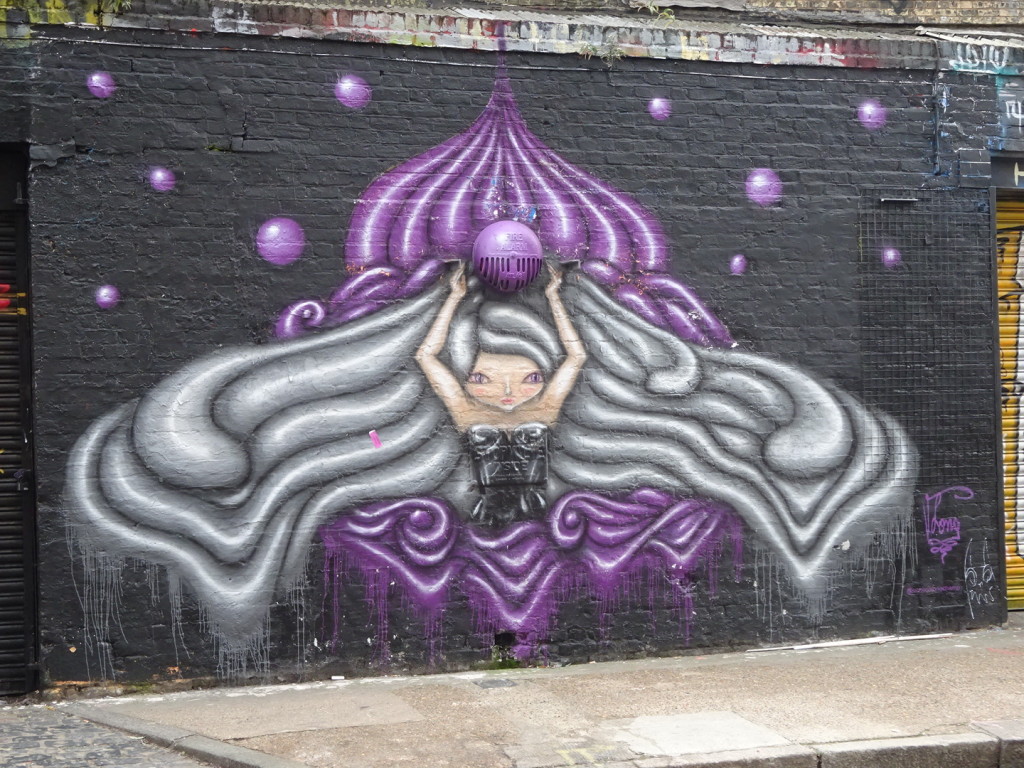 Notice how the fire alarm signal is integrated into the design? You go, artist! 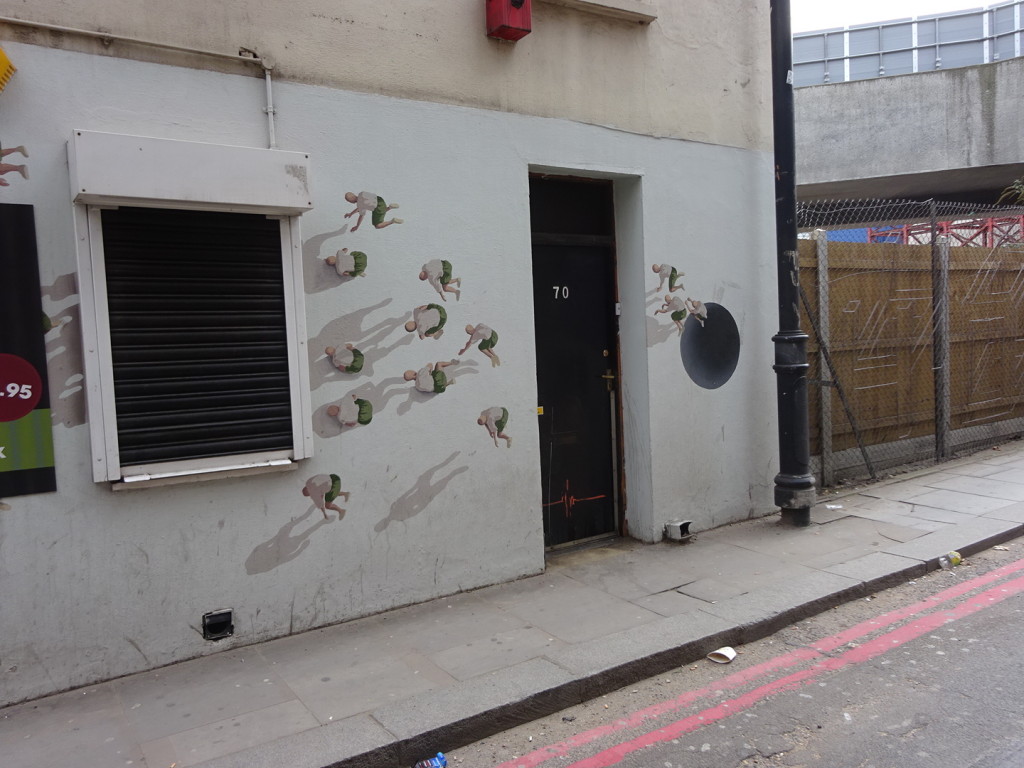 Another one of Anner’s faves. 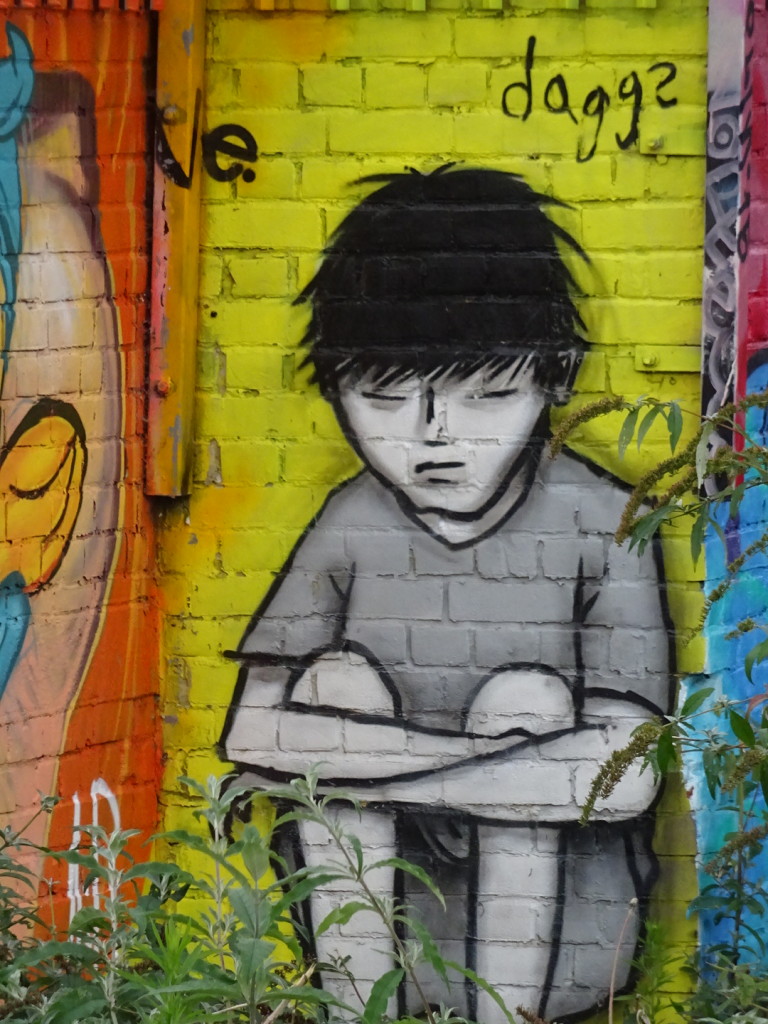 There was just something about this one that really struck me. Perhaps because we’ve all been there? 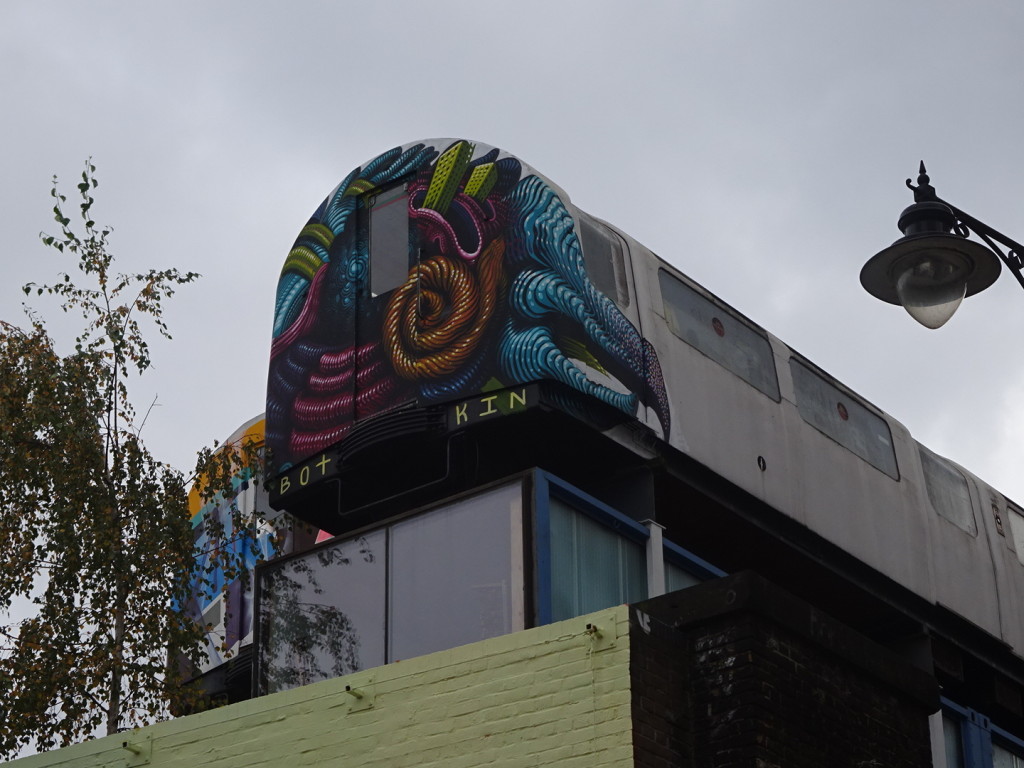 Old subway cars that have now been converted to live/work artist spaces! 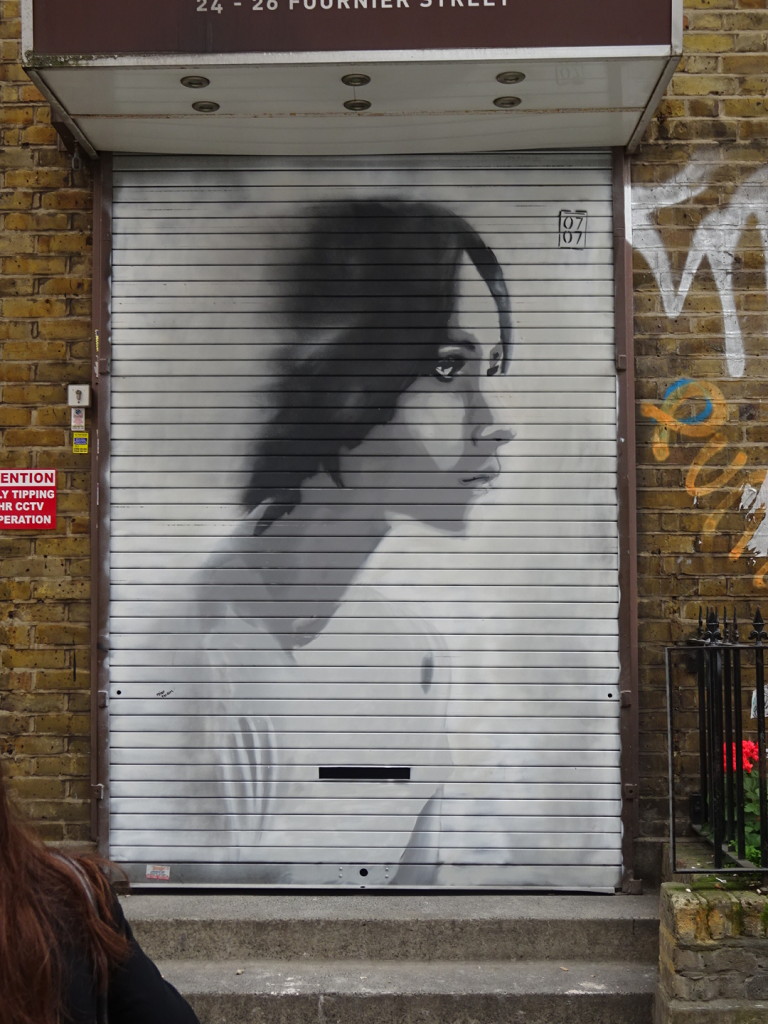 With art like that, I’d feel a little bad opening my shop door every morning! 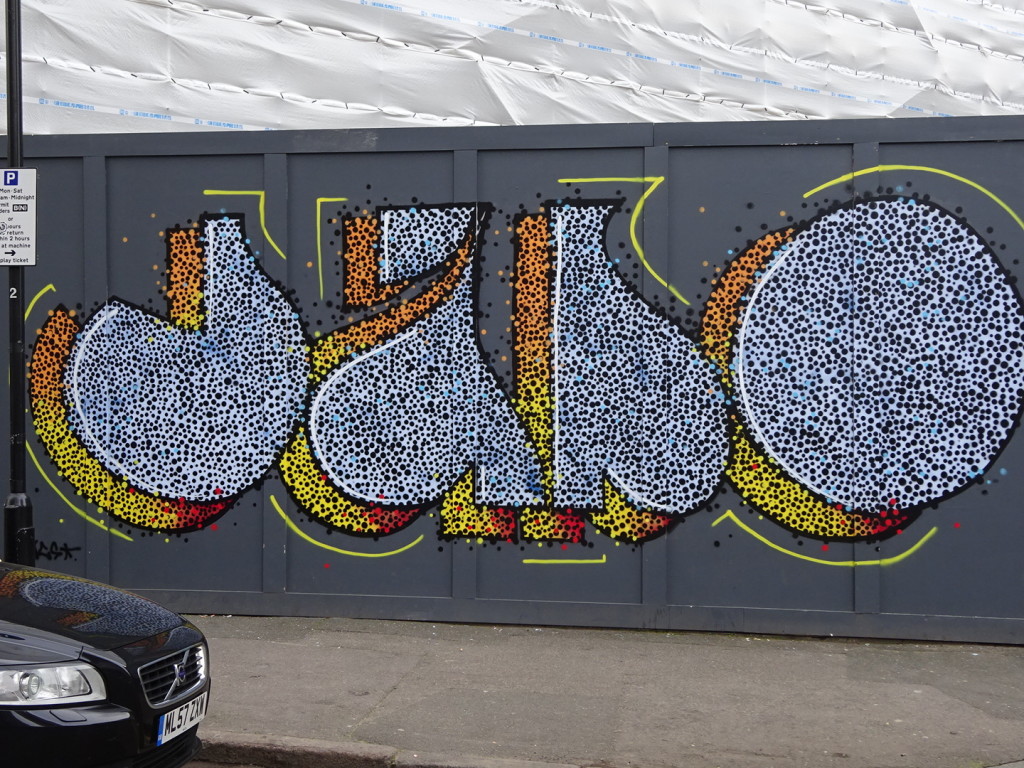 For those who think graffiti can’t be beautiful, I say to think again!

There’s an area in town called the Nomadic Community where street artists can actually practice their craft legally! It’s set aside by a builder for artist’s use until the building gets started. Very, very cool space to be in – art everywhere!

Not to worry, the Community comes with it’s own guard… 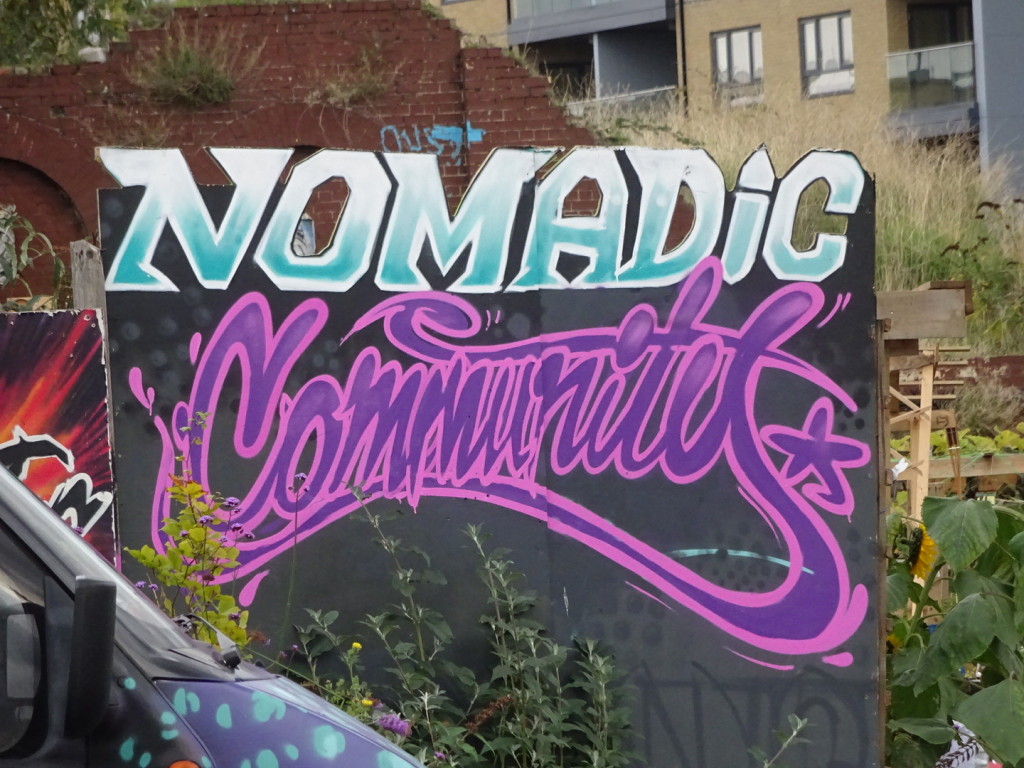 Even though we aren’t street artists, I’d like to think Anner and I are part of the Nomadic Community!

« Housesit Your Way Around The World
What it Cost: UK (Wales, England) »