We were super lucky to make a return visit to the Makonde tribe where Aaron reunited with his wood carving teacher, Mende, from 2015. As a refresher, during our 2015 trip our friend Brian asked the Makonde tribe if they’d give Aaron a carving lesson. When they said ‘yes’ Aaron and I peeled off from the rest of our safari group and spent the entire day learning to carve. We had an incredible experience and though there was a huge language barrier, we had one of our most memorable days of the big trip.

That would be wonderful enough, but then a couple of years later, our friend Brian visited them again and Aaron’s teacher remembered him and sent a gift home for us. That was pretty much mind blowing – you can see it here. So when we decided to return to northern Tanzania, of course we asked Brian if we could stop by. It was a totally unplanned stop (i.e. – not on the safari itinerary Brian sent out to everyone), but thankfully Brian is the kind of guy and guide who cares deeply about personal connections, so on the fly, he added a Makonde stop to the day’s itinerary.

Can I just say, our hearts were pounding when we walked into their shop/studio/compound. We were *very* excited to return. The tribe members recognized Aaron immediately and started yelling for Mende. You could see the teacher coming through the hut truly stunned to see his student again. It was hugs all around. So. Much. Hugging.

Michael, the English speaker for the tribe. He recogonized Aaron before we walked through the gate and started yelling.

Even I got into the hugging.

We exchanged gifts: Aaron brought Mende a necklace from his wood and pearl collection and Mende gave us two masks he’d carved, a male and a female face for us both. We caught up with him a bit thanks to Brian interpreting in Swahili for us.

Brian explained the pendant was hand-made by Aaron and the types of wood, but nobody seemed to know the Swahili word for pearl or oyster so that left a bit unexplained.

Putting on the necklace – Mende said he’ll only take it off when showering. So wonderful giving gifts folks truly enjoy! 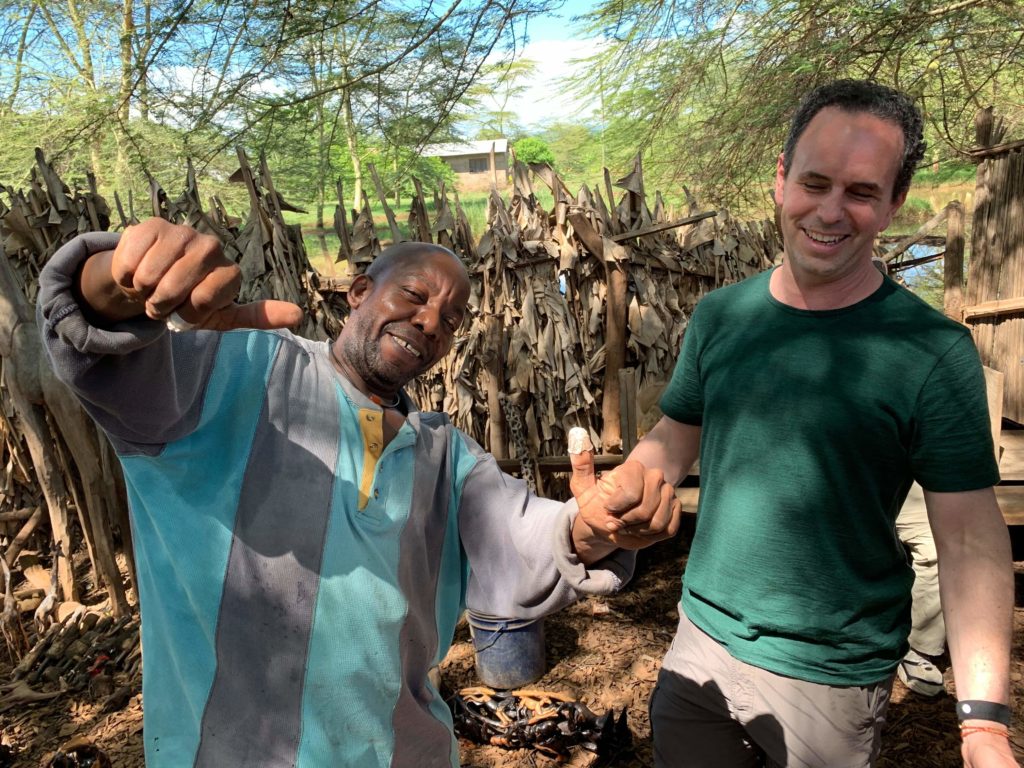 I think Mende appreciated the thought.

Along with the necklace, we brought photos from the 2015 trip – we’ve definitely noticed that Tanzanians truly appreciate physical photographs.

They were definitely ooh-ed and ahh-ed over. I think they were actually surprised when we said they were for them to keep! So fun. And just like that, it was time for one last photo and to part company once more.

AFTERWARDS: Here’s a fun ending to our quick reunion with the Makonde: while we were all busy hugging and chatting, the rest of our safari friends were busy shopping and having a great time. We returned to our safari Land Cruiser when Connie, one of our jeep-mates, said she wished she would have gotten a picture inside the Makonde shop. Josh, our jeep-mate closest to the door, grabbed her iPhone and jumped out of the jeep. About then Goodluck, our driver, started the vehicle and began pulling out. Yes, we stopped him from going any further as Josh should only take a second to snap the pic and get back in. We wait… We start to wonder… I think maybe it’s time for someone to go find him… Eventually he returns, but something looks off. Wait? His sunnies are missing? Turns out, when he went in to take the picture, one of the Makonde said they would like to trade for Josh’s sunglasses! They negotiated and Josh came away with a brand new ebony carving! They even wrapped it up before sending him on his way. Now that was a fantastic ending to a wonderful reunion visit.

This carving has quite a story.

Next up, we continue to the safari and the introduction of the FunBus! Stay tuned.
« Batik “Factory”
Chimp-rific! »