All travel blogs seem to say something like “…try to participate in local festivals”. Well, allow us to join the crowd! When we arrived at our house-sit ten days ago, the folks we are sitting for told us about Pase del Niño Viajero which is an EPIC Christmas Eve-day parade. And by “Eve-day”, I mean it goes All Day Long! It started around 9am and was still going strong when we left at 6pm! Parades are a very popular tradition in Latin America and think of it this way: Cuenca is to Christmas Parades what Minnesota is to State Fairs. Something like 50,000 people are in the parade and another 200,000 pour in to watch it!! 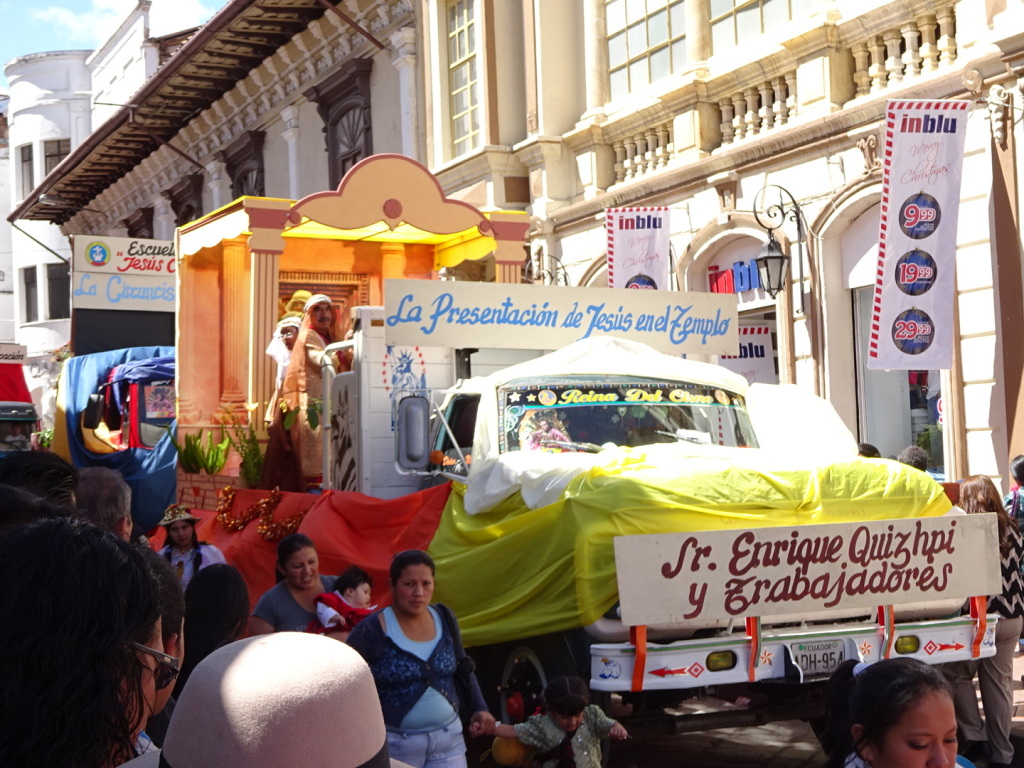 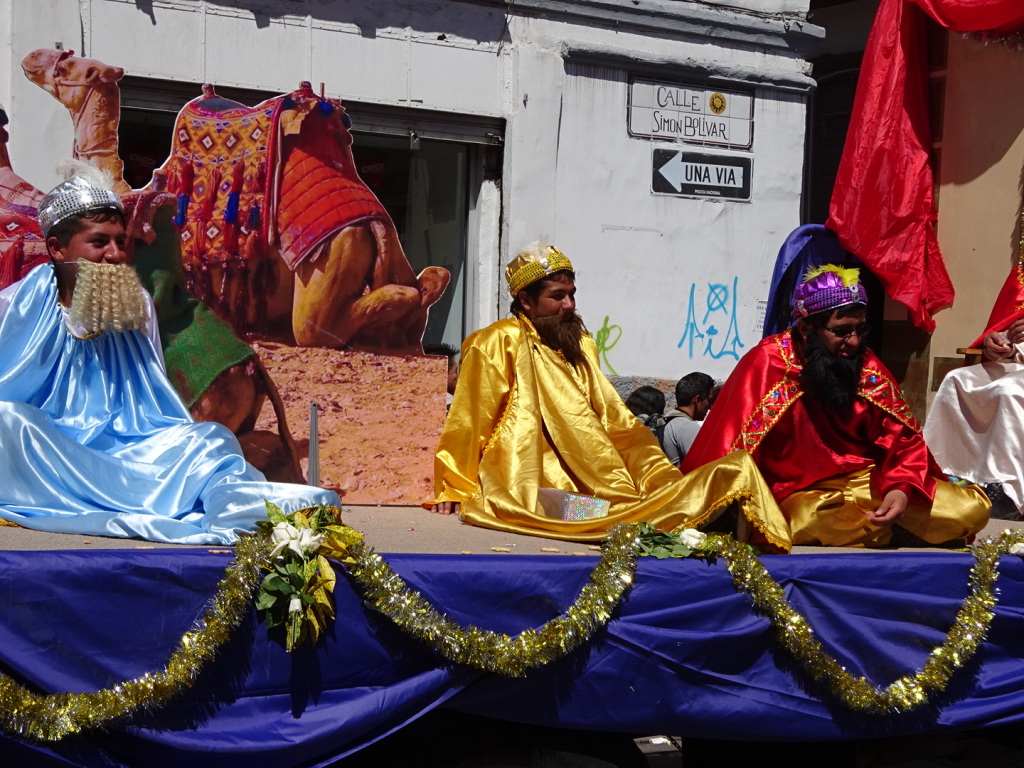 Wise men rest on their float.

It felt like every single truck, flat-bed and semi in all of Ecuador was right here in Cuenca, covered in colorful fabric, gold ric-rack and lace, and then loaded up with living nativity scenes. Every. Single. Float. is a living nativity scene of pretty much all children – with every little mountain village putting up their best as a matter of pride. The kids are all in costume. Apparently you pretty much can pick from: traditional clothing, angel, Egyptian or Roman type, shepard, wise man, baby Jesus, – OR, wait for it….SANTA! Loved the little boys with drawn on curly mustaches and, once, even sideburns! There are also marching bands and dancers in traditional attire. Every float had at least one baby Jesus. The baby might be in the manger, held by someone on the float OR tied to the front of the truck like a giant hood-ornament. There were some actual children on the hoods of the trucks as well…though I doubt they were tied on.

Here are two videos of the parade (if the video is pixelated, stop the video and click the HQ button – that’ll change to the high quality version – the button turns blue on our screen when we’re in HQ):

1) This one is short and shows the kids on horses.

2) This one here is longer and gives you a glimpse into the music and dancing. (Karen Howard, are you watching??) 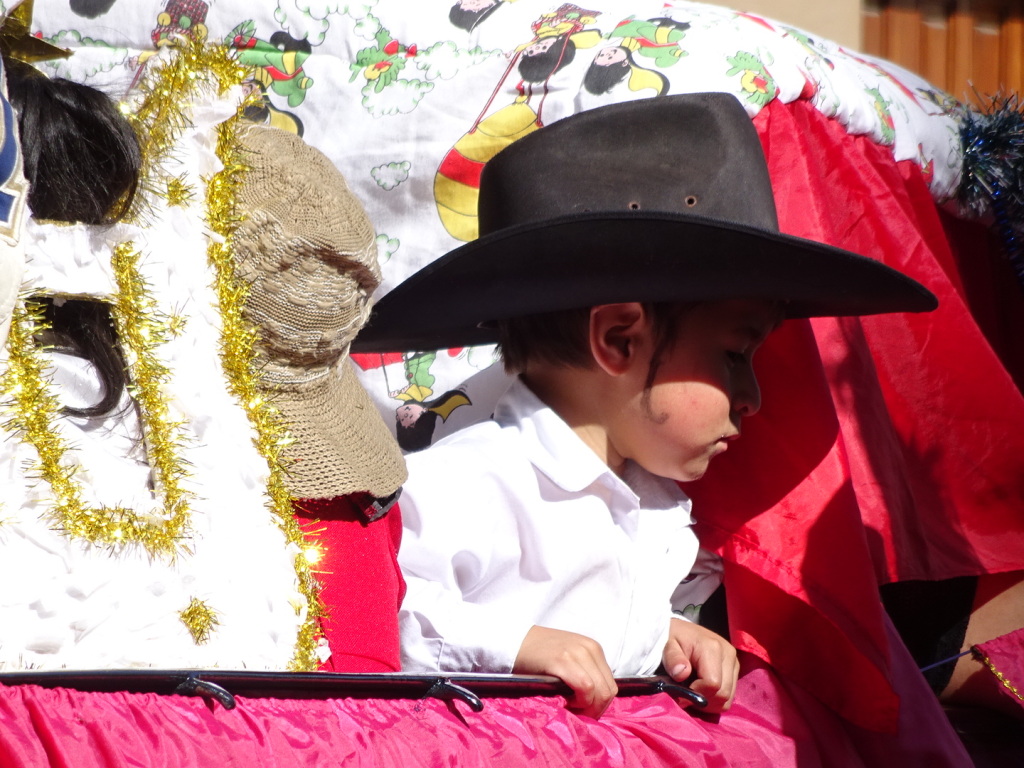 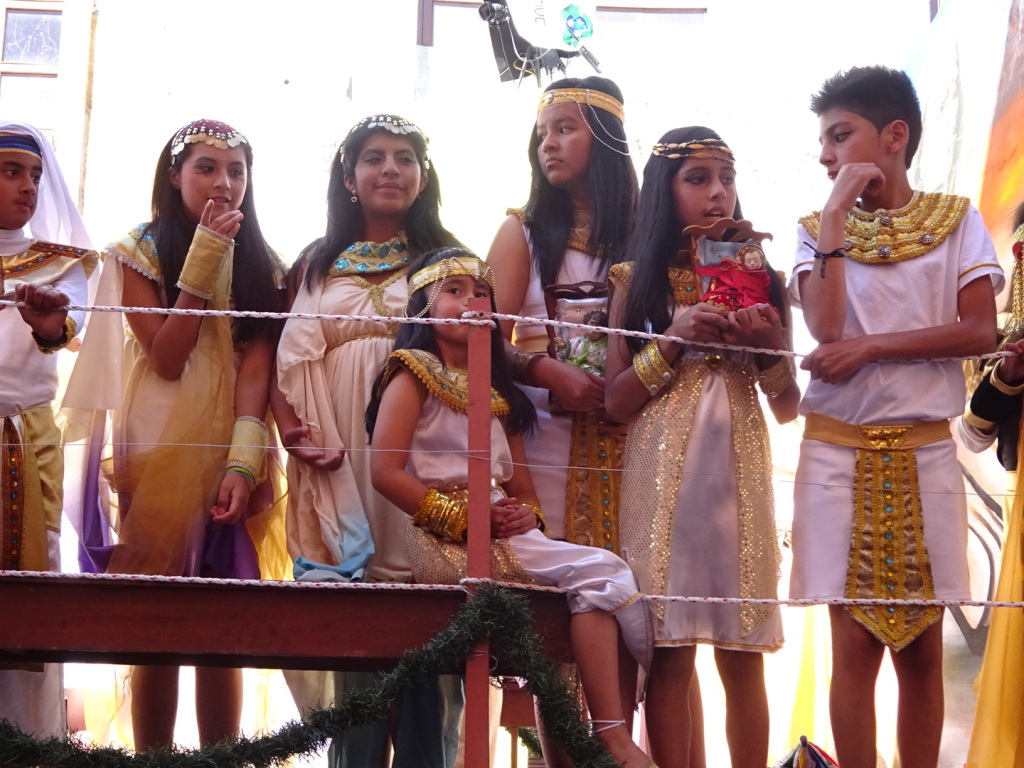 Kids on a float…they got a deal on the Egyptian lot! 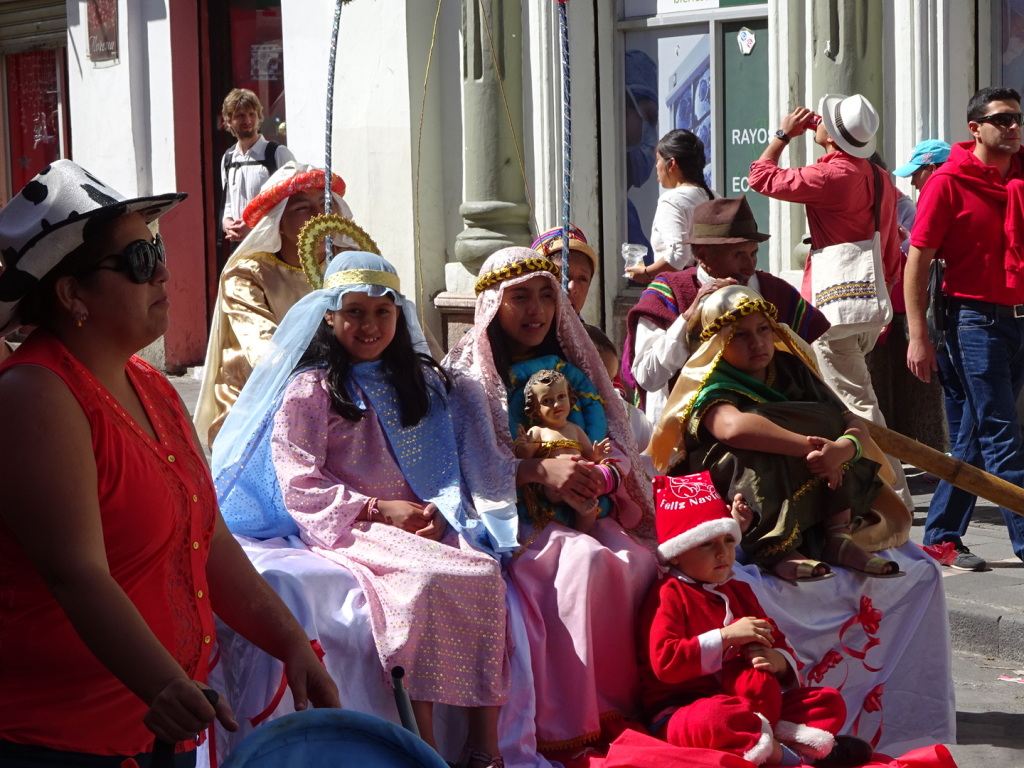 Parade goers with their baby jesus. Everyone had their own personal Jesus with them. I am not kidding. Young, old, men, women – every family brought a baby Jesus to the parade. 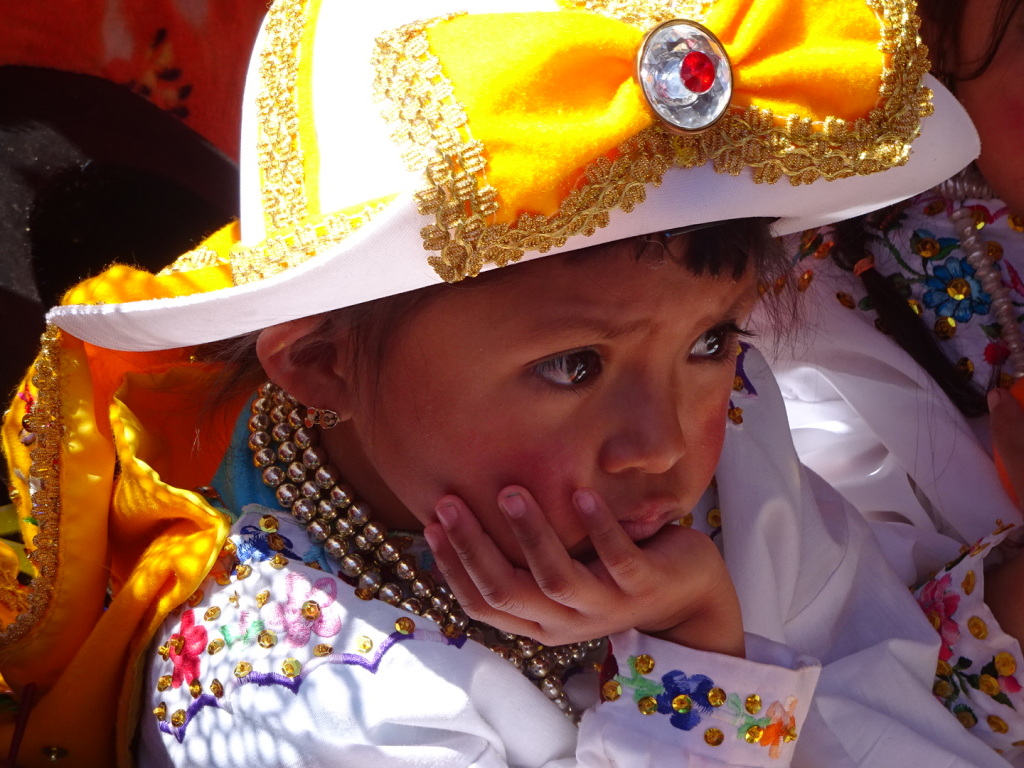 Sure is exhuasting being in this 50,000 person parade!

Child on the hood….I wasn’t kidding. This one is much older than many of the Kids on Hoods.

There were also many units made up of horses, typically being ridden by toddlers in super-elaborate traditional costumes. The dresses of the girls and the capes of the boys covered the entire body of the horse! PLUS, there were multiple May Poles. They would stop on the street, set up the pole and then do the dance that weaves the colorful ribbons on to the pole. Wonder if they call them something else, since it’s certainly not May… 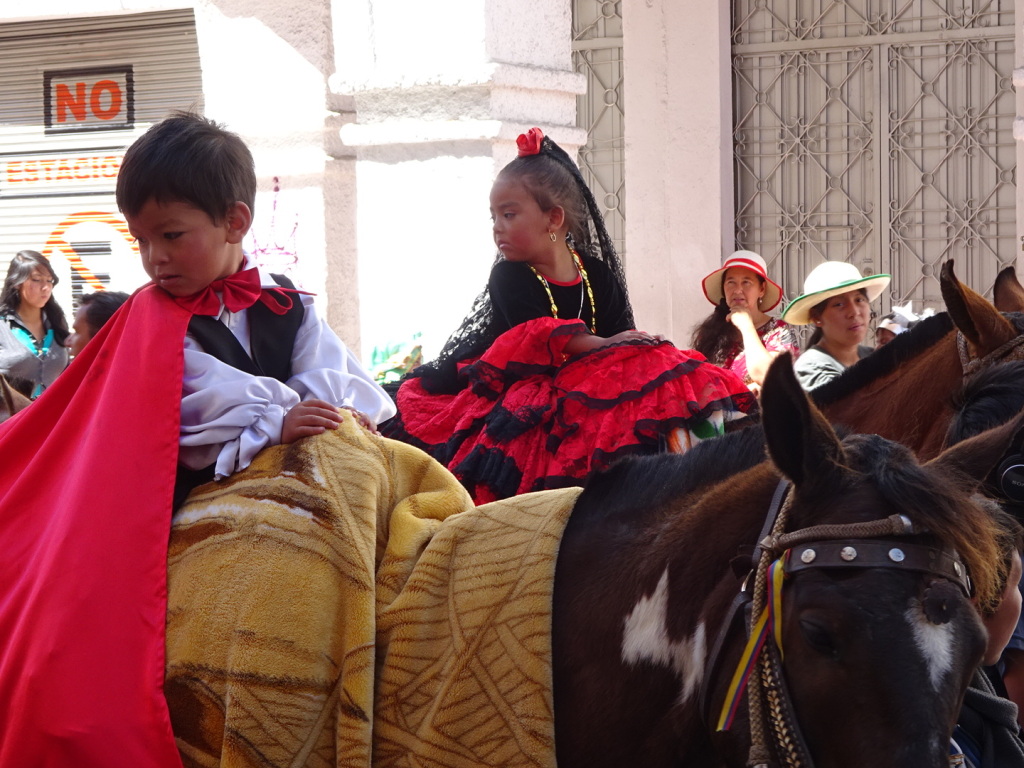 There were many horses topped with little children in traditional costume. The dresses and capes cover the entire horse! 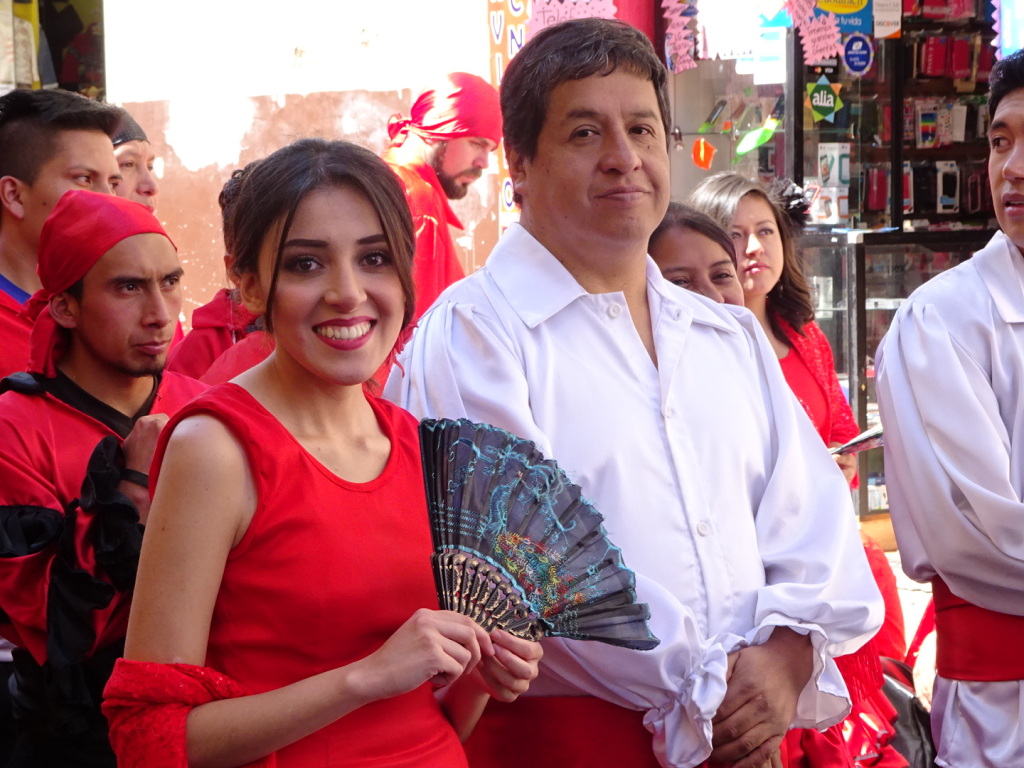 Traditional dancers who were kind enough to pose for us!

Girl on her horse. 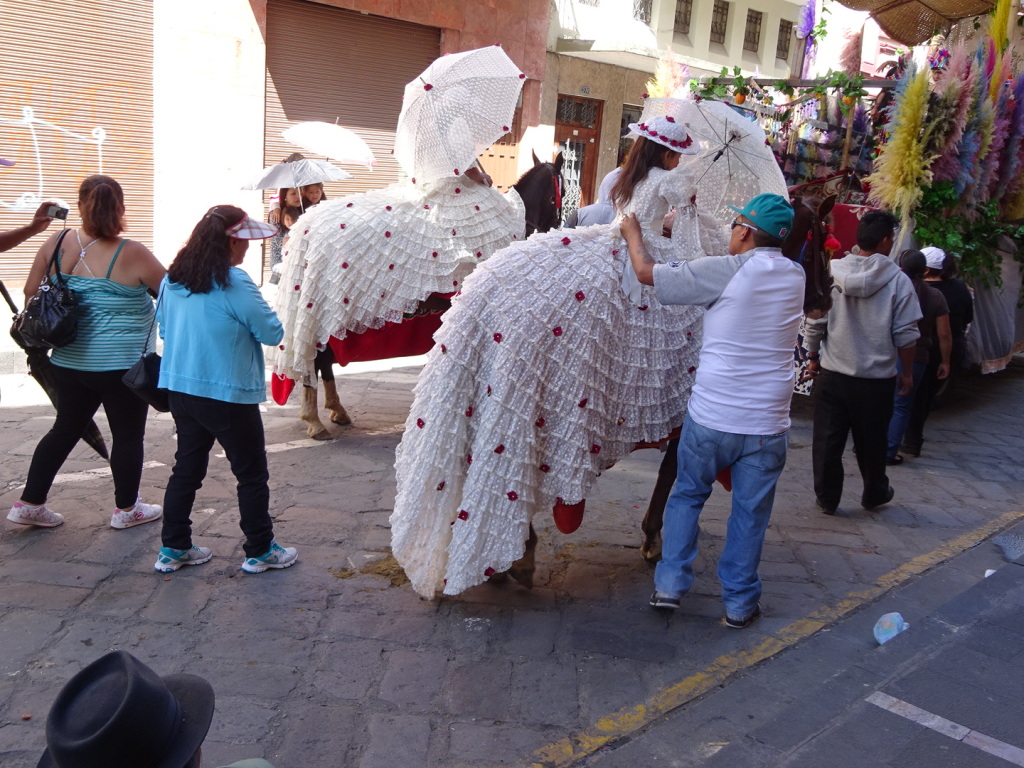 All that prettiness is the little girl’s dress! 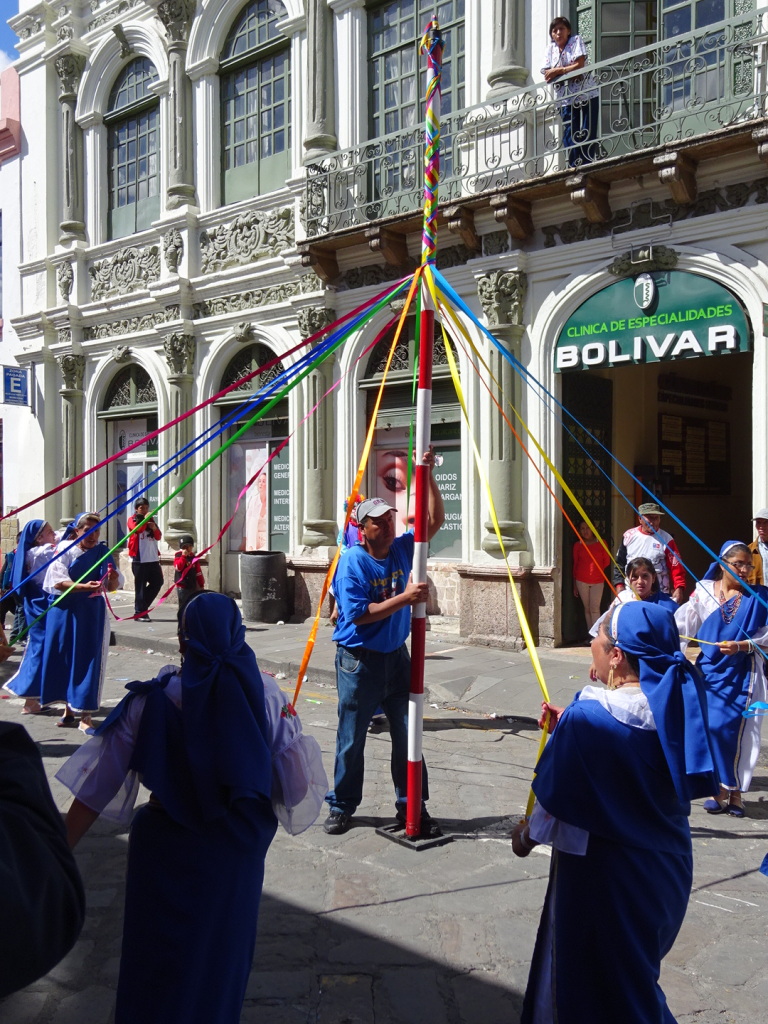 People walk right up to the floats – no problem. Some floats toss out candy (one little girl threw a lolly directly at Aaron…she knows a good thing when she sees it!). Other floats hand out entire meals while they creep by. Sometimes the parade moves at a normal parade speed, but lots of times the parade just stopped. The streets were crowded, but you could easily view the parade by just inching yourself down the street. 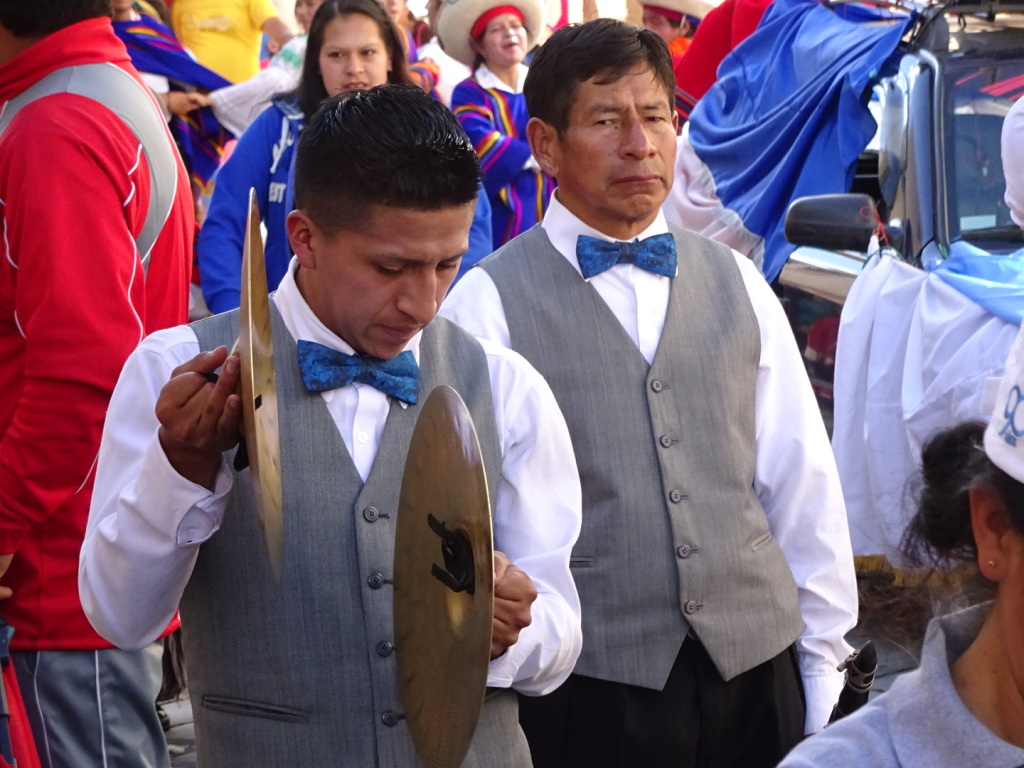 Gotta watch them cymbal players – there’s apparently something shifty about them. 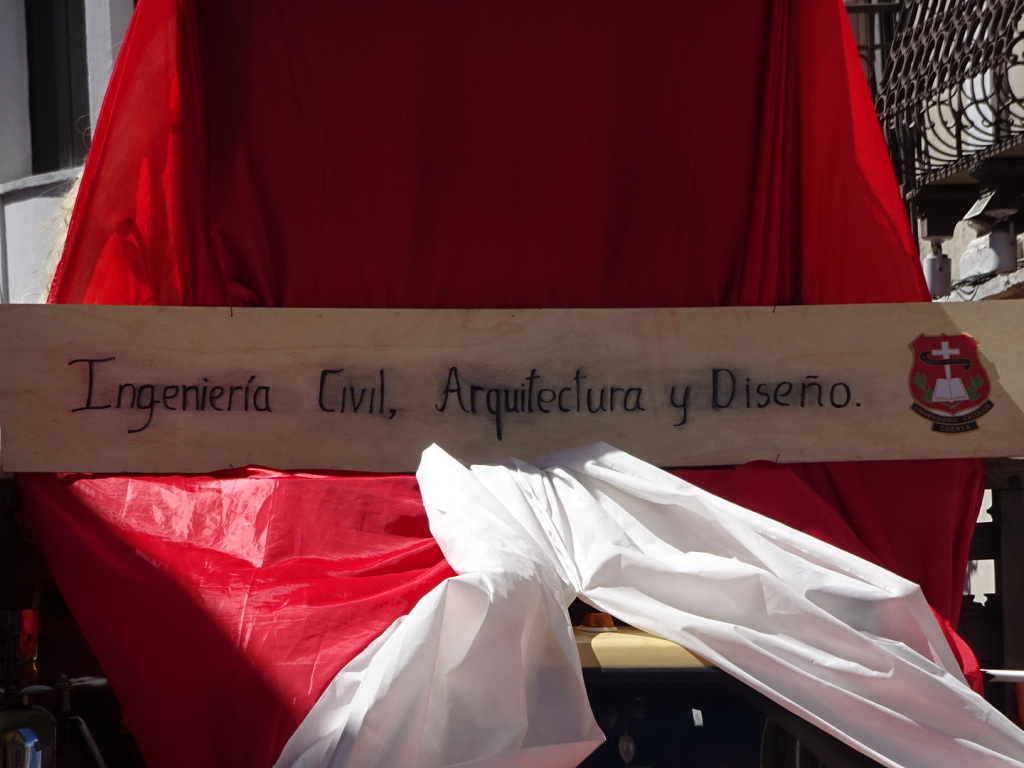 This float brought to you by the civil engineers, architects and designers. My People! And as you would expect — the engineering floats were very plain, utilitarian and got the job done!

Once we were saturated with watching the mobile nativities, which took awhile as all the kids were so darned cute!!!, we took some time to eat traditional foods from the street vendors. Llapachingas are quite tasty if you’re curious – sort of like fried balls of mashed potato – and Aaron said the pork sandwiches really hit the spot. You can find pigs on the spit just about everywhere in Cuenca…say, just walking down the street. 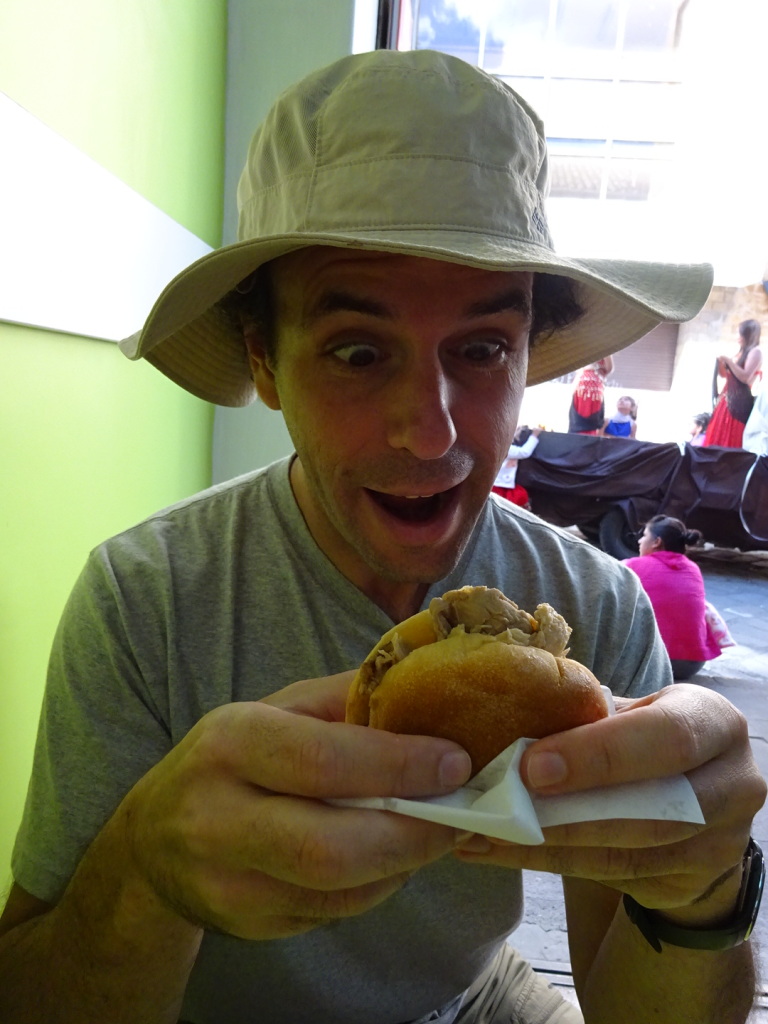 We thought it might be a turkey sandwich, but it was pork…basically a homemade meal, carved in front of us for $1.50. Nice. 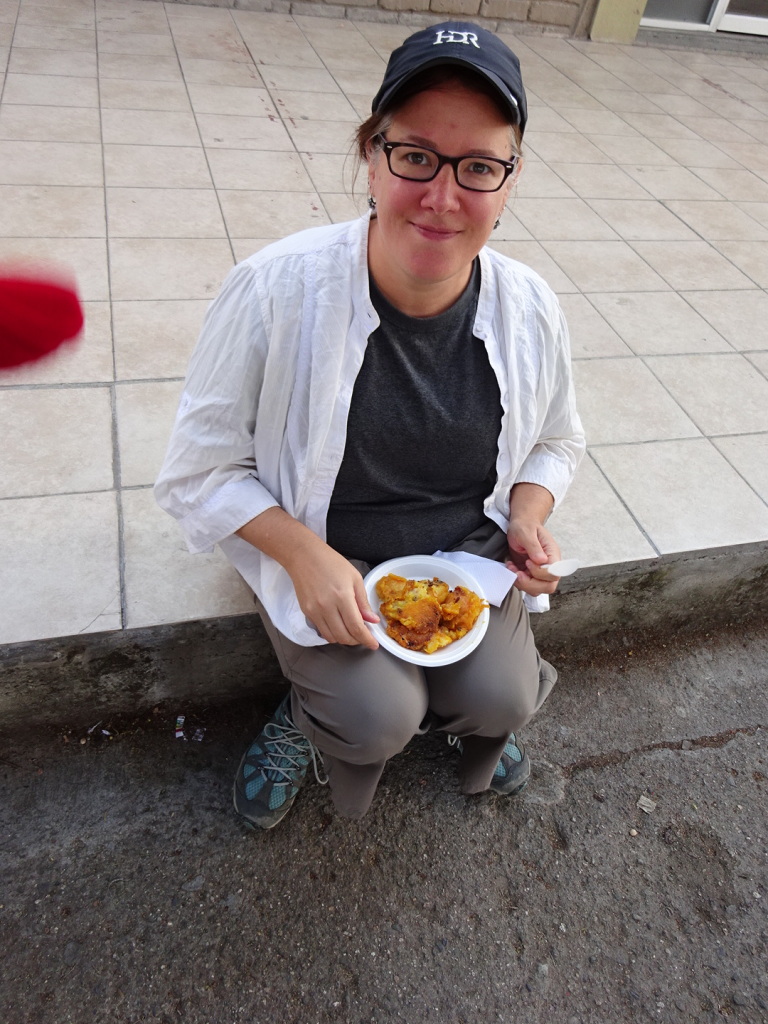 Overall, it was one of those unanticipated delights that comes with travel. You just don’t know what the day will bring and sometimes you get lucky to land in the just the right place at the right time! Now we can’t wait for the New Year’s events – bring on the local festivals!!!

« Passing of the Traveling Child Parade – Part 2 – A Highlight!
The Money – details! »