Aaron Makes A Ladle in the Mountains of Tanzania

After finishing our safari we found ourselves inspired to head off the tourist track and do some exploring of the rural villages in the Pare Mountains. It was quite a different experience – much quieter with a chance to see how the average villagers lived. Let’s just say that it’s not quite the lap of luxury we enjoyed on safari! Folks still seemed happy, but they were definitely making do with much less that we do in the US. 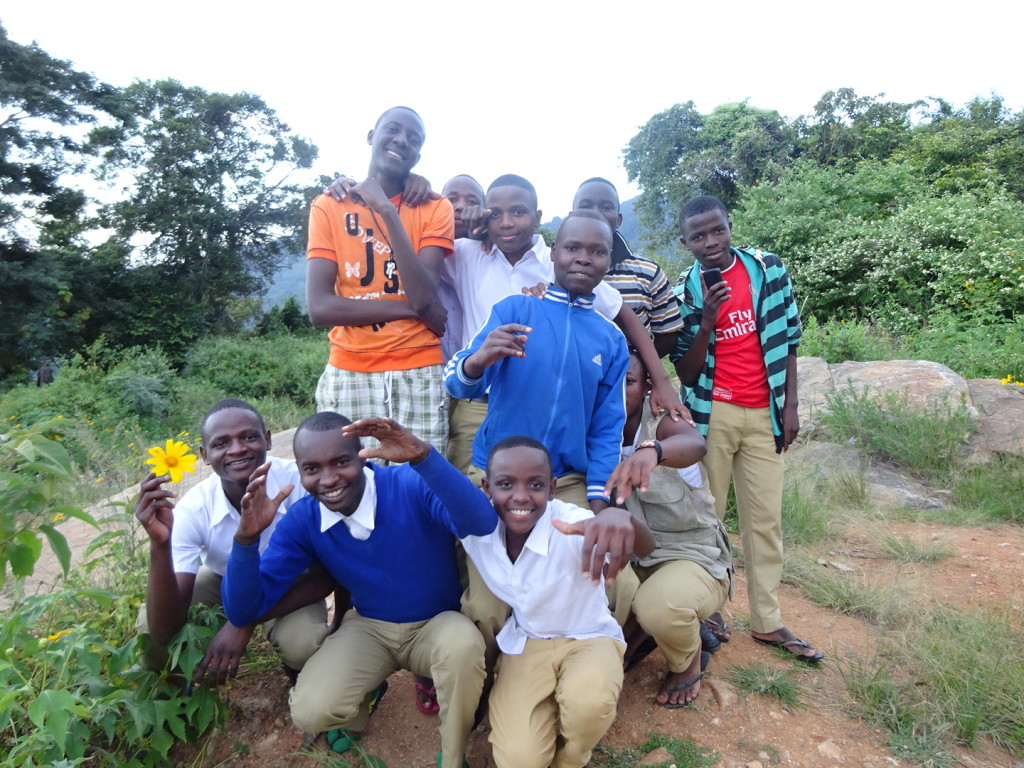 Secondary school students happy to see us wandering the roads in the South Pare Mountains!

Along with doing with less, they also had fewer resources available so they tended to scrounge and recycle where they could. Kids toys included old paint rollers attached to the end of a stick. Tires were cut up for shoes. Anything that could be re-used, was. And that brings me to today’s story! Allow me to introduce Nathan, a 3rd generation metalworker. Traditionally you might call him a tinsmith, but he works in all sorts of recycled metals, so I’m just sticking with metalsmith. Wait…maybe I could call him a modern-day tinker?

Nathan makes all sorts of things for sale to the local villagers in Mwaba. Among other things he makes hurricane lamps from soup cans, cookers from propane tanks he cuts in half, and pots, lids and cooking utensils from sheets of metal recycled from the walls of junked cars and busses! 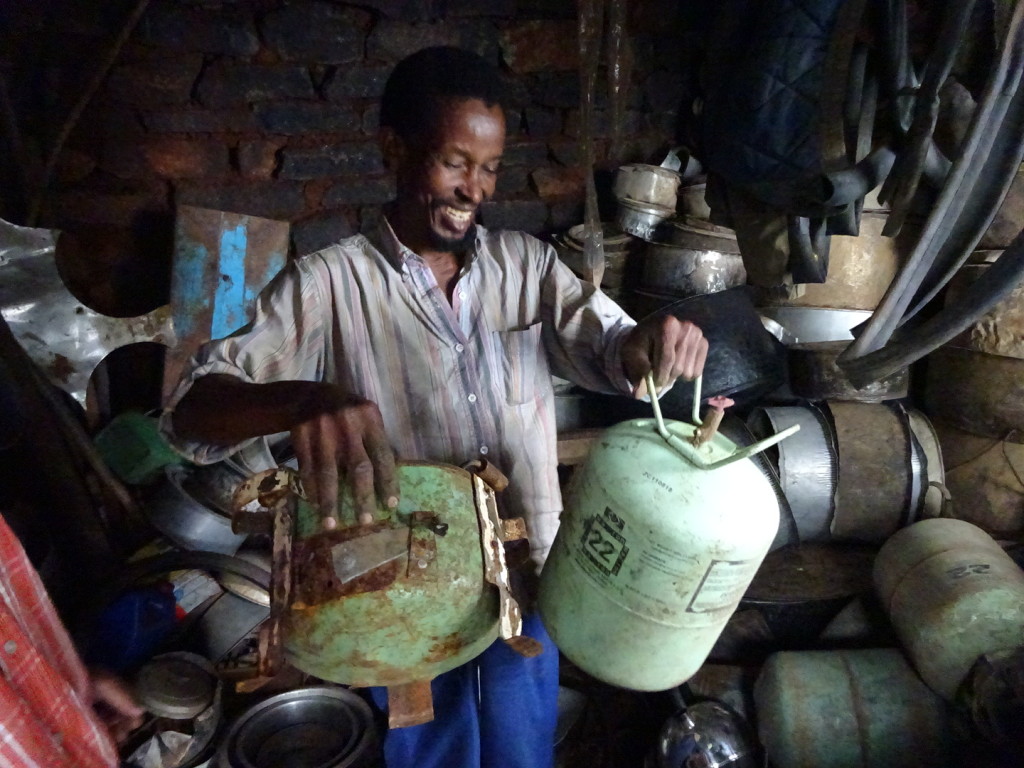 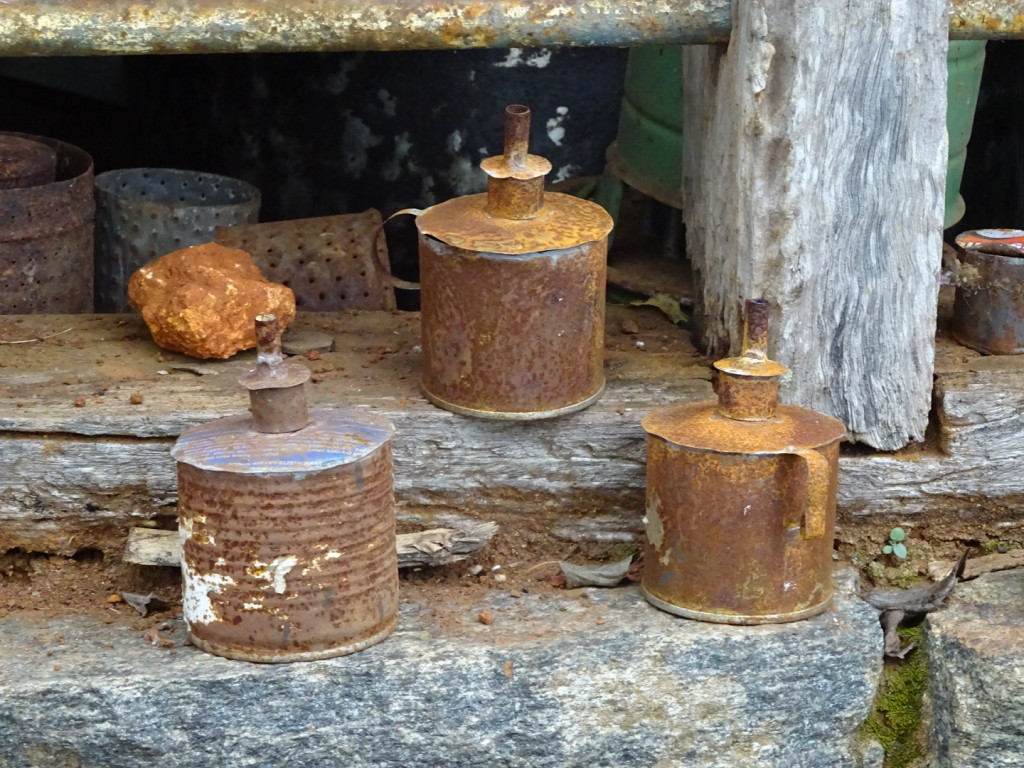 A variety of pieces Nathan made.

When I came along, he did a quick demo showing how he makes his cooking pots and then I asked if I could have a lesson on how to make a ladle. Step right up, Aaron, and a-ladling-you-will-go!

First thing we had to do was cut a metal disc which could then be dapped (hammered into a half-dome shape). Nathan grabbed a piece from his pile of recycled sheets and it turned out to be from the roof of a scrapped bus! He grabbed his amazing home-made dividers and marked out the circle for me to cut out. 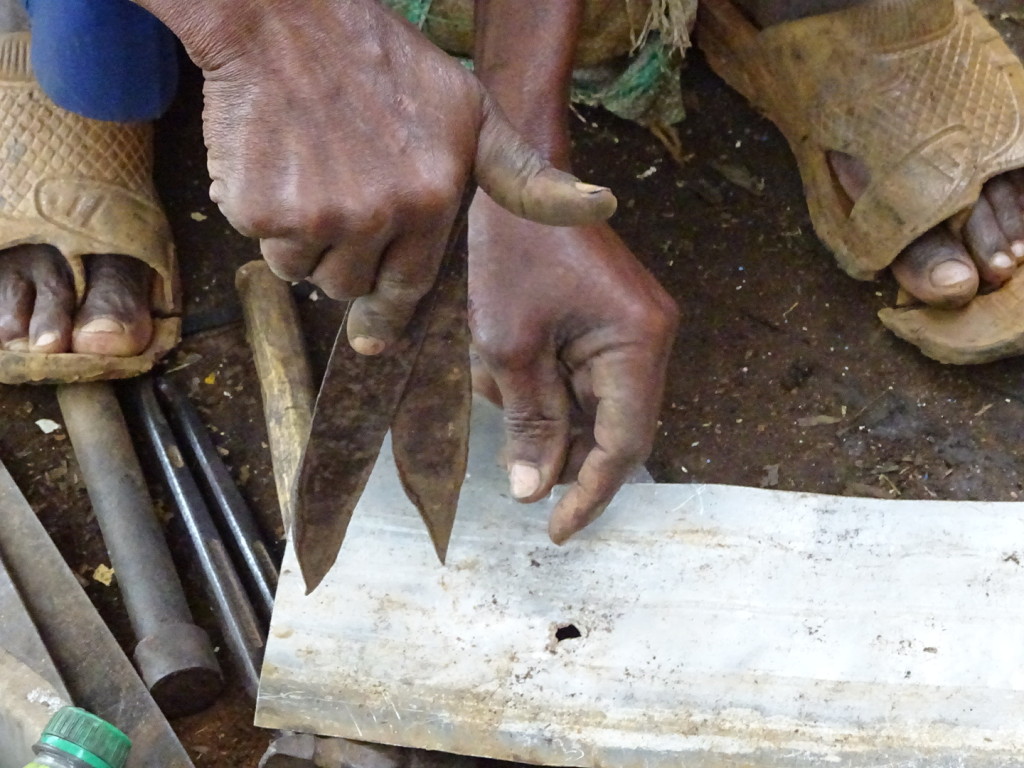 Check out these hand-made dividers! Way cool! Here marking out the circle for the bowl before I cut it out. 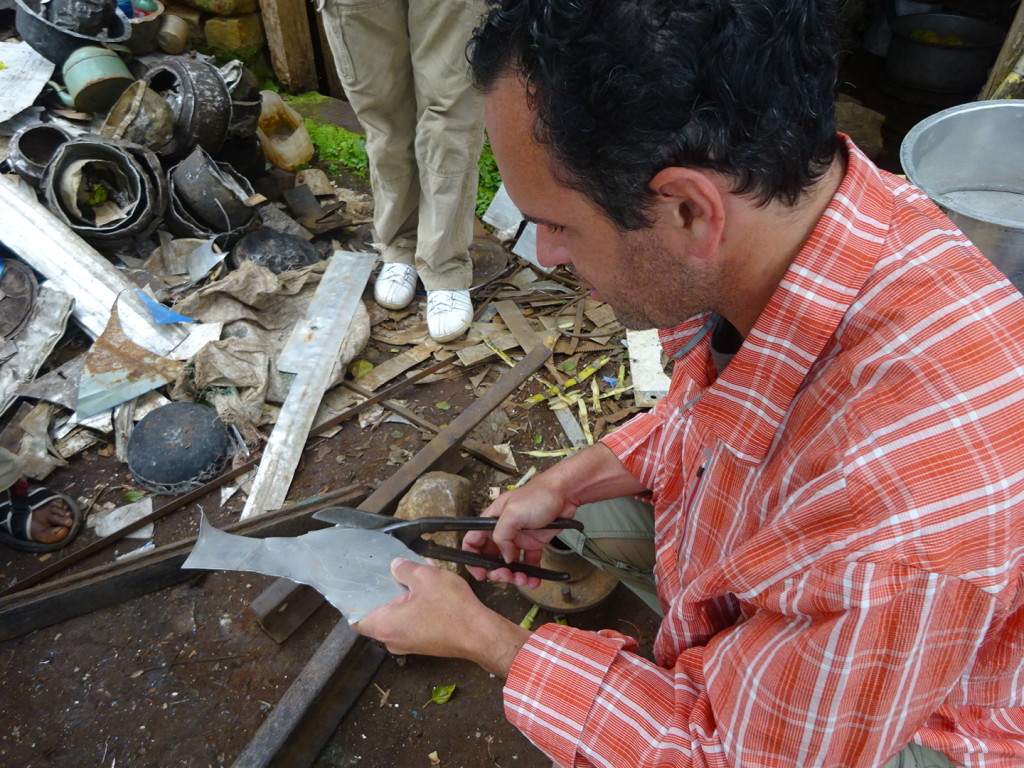 Starting to cut the disc for the bowl of my ladle.

With disc in hand, it was time to start giving it the half-dome shape. At home I’d most likely work with a dapping block – a piece of wood or metal with a series of recessed domes of different depths which I would hammer into, working my way through them as my disc slowly became a hemisphere. Well, not this time! 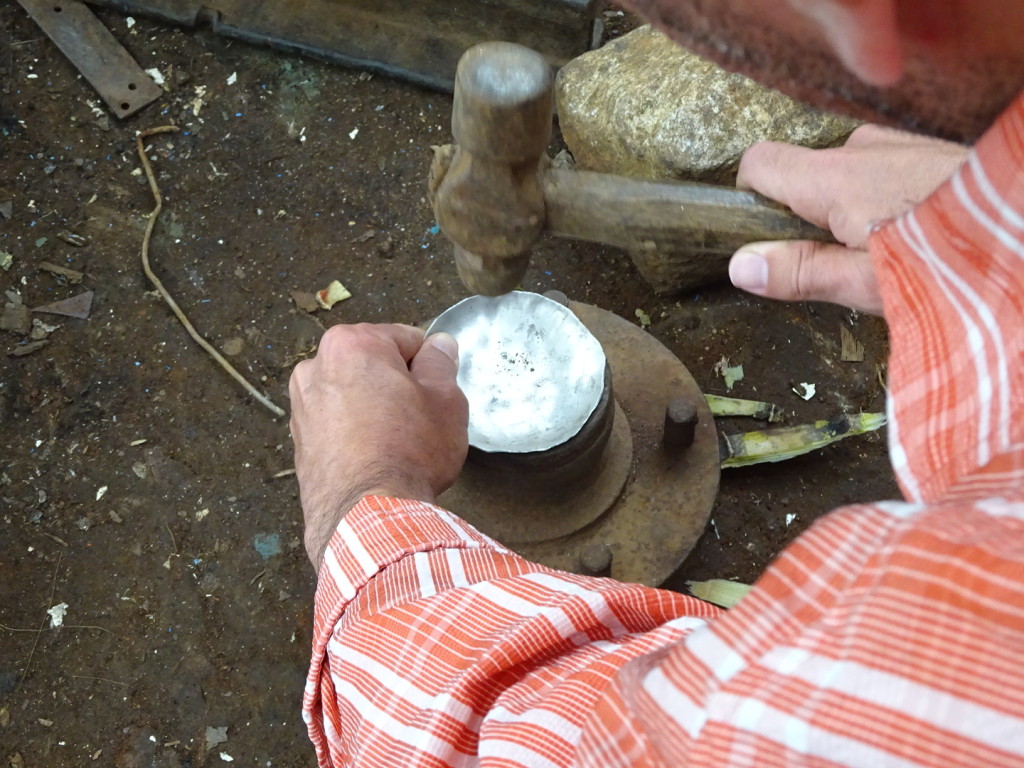 Dapping the bowl cup using a car wheel part as a dapping block!

Once the bowl part was done, we cleaned up the edges a bit with snips and a file, then it was time to work on the handle. Back to the metal sheet to mark and cut out a long, thin strip. 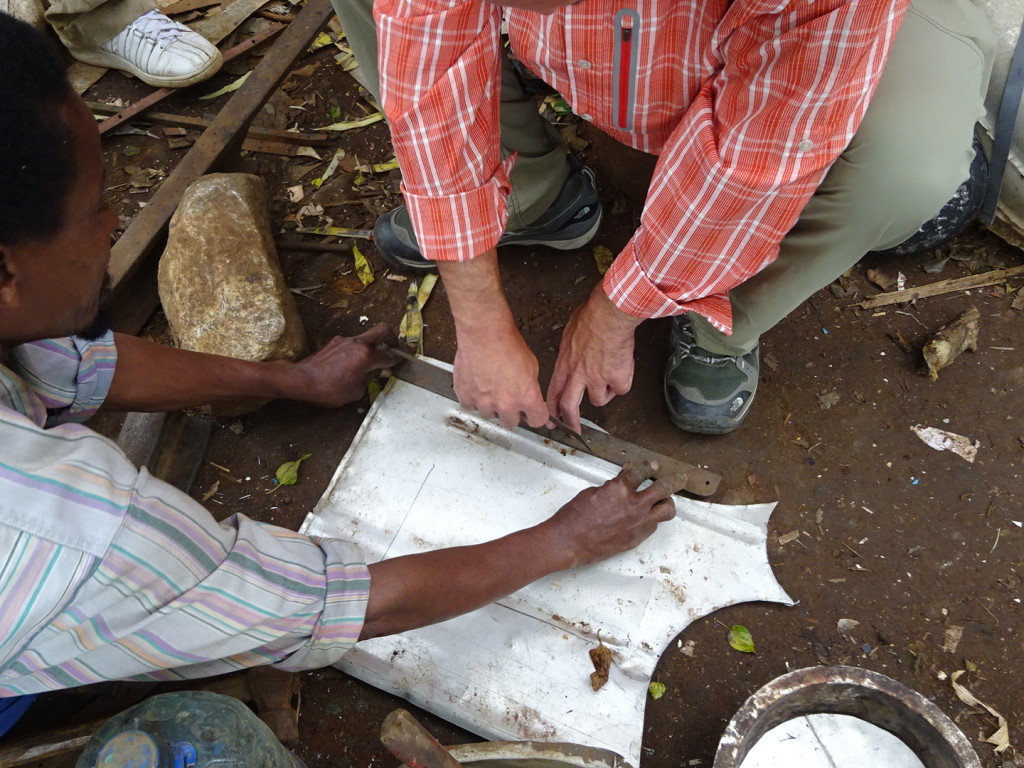 Using a steel bar as a measure for marking the handle width.

Then Nathan used the edge of a railroad tie as a bending stake and hammered the edges of the sheet over. Perhaps I should say he “whacked” the edges over as he didn’t actually use a hammer – just grabbed a flat piece of rusted steel and whacked away at it! 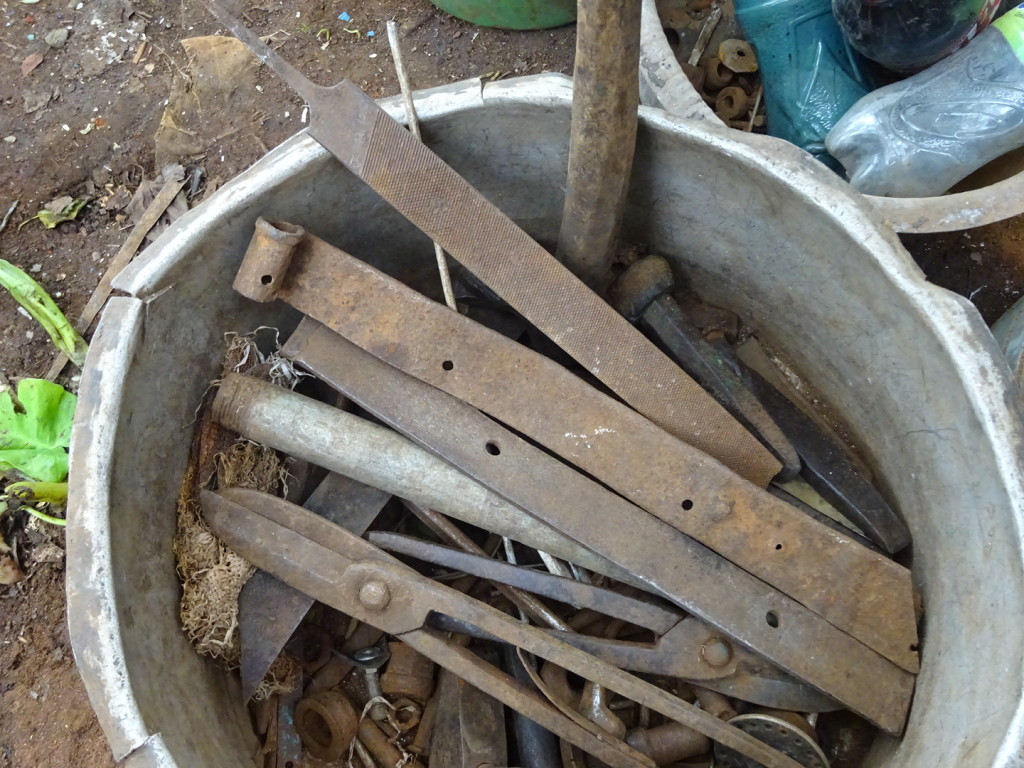 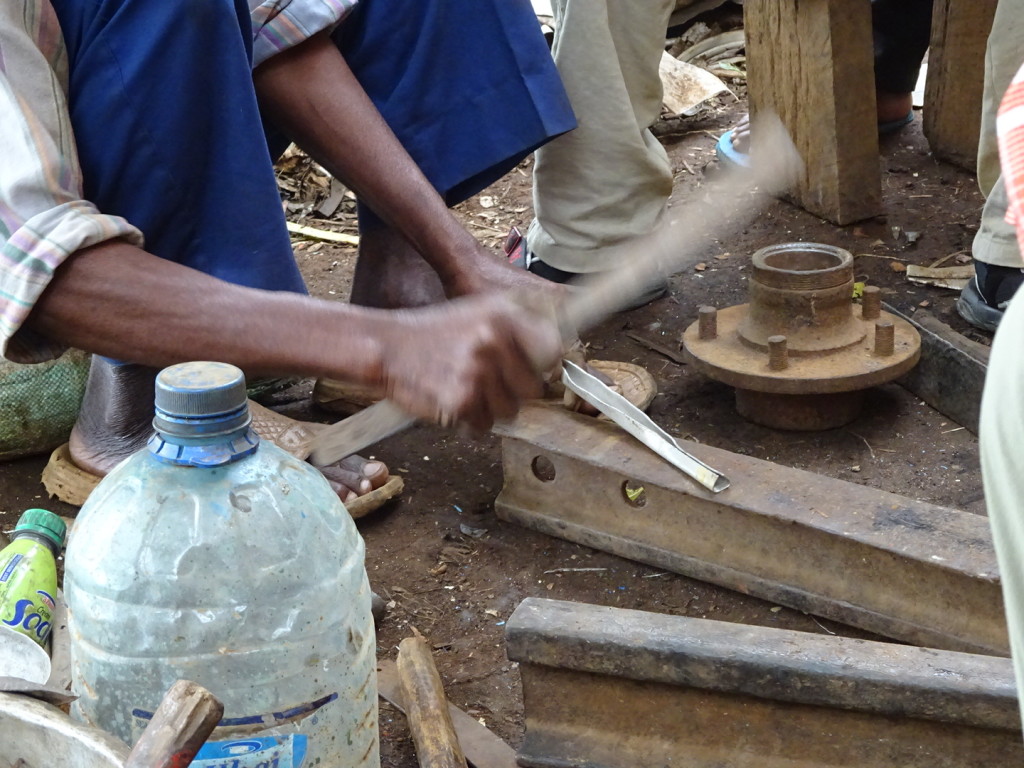 After curving the sides over to become a sort of flattened tube, we used different parts of the railroad tie to give the handle a hook at one end for hanging and a curve at the other to allow it to rivet to the bowl cup. 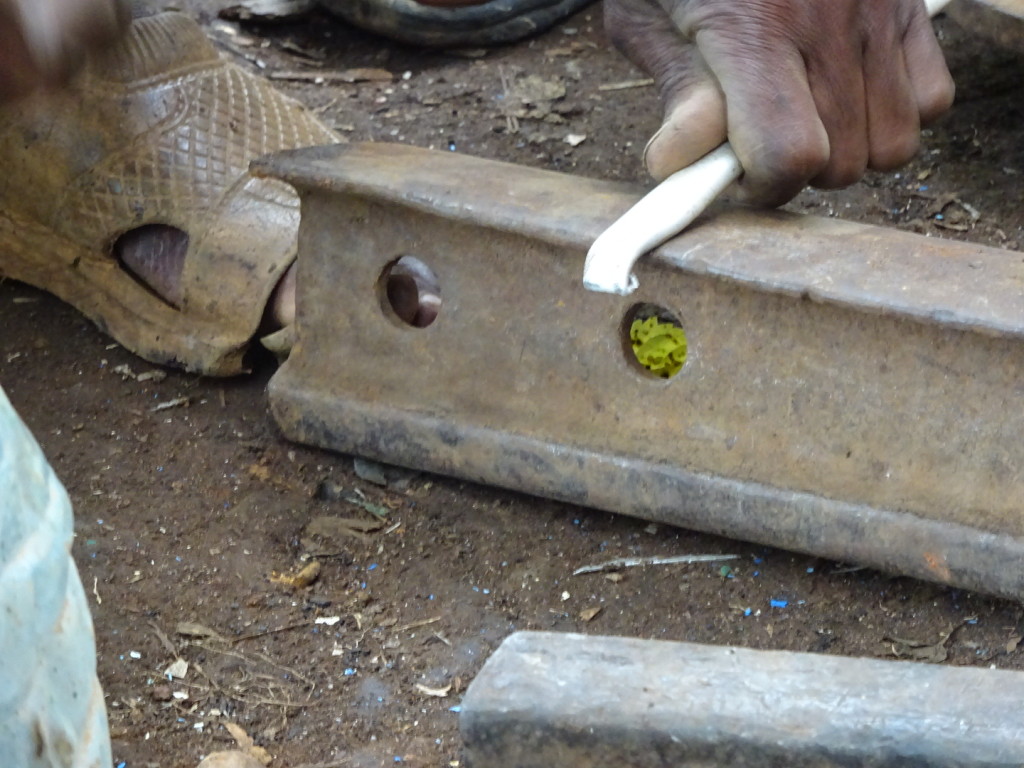 We used a sort of sharpened nail punch to create holes in the bowl and handle which we then used aluminum wire to rivet together. 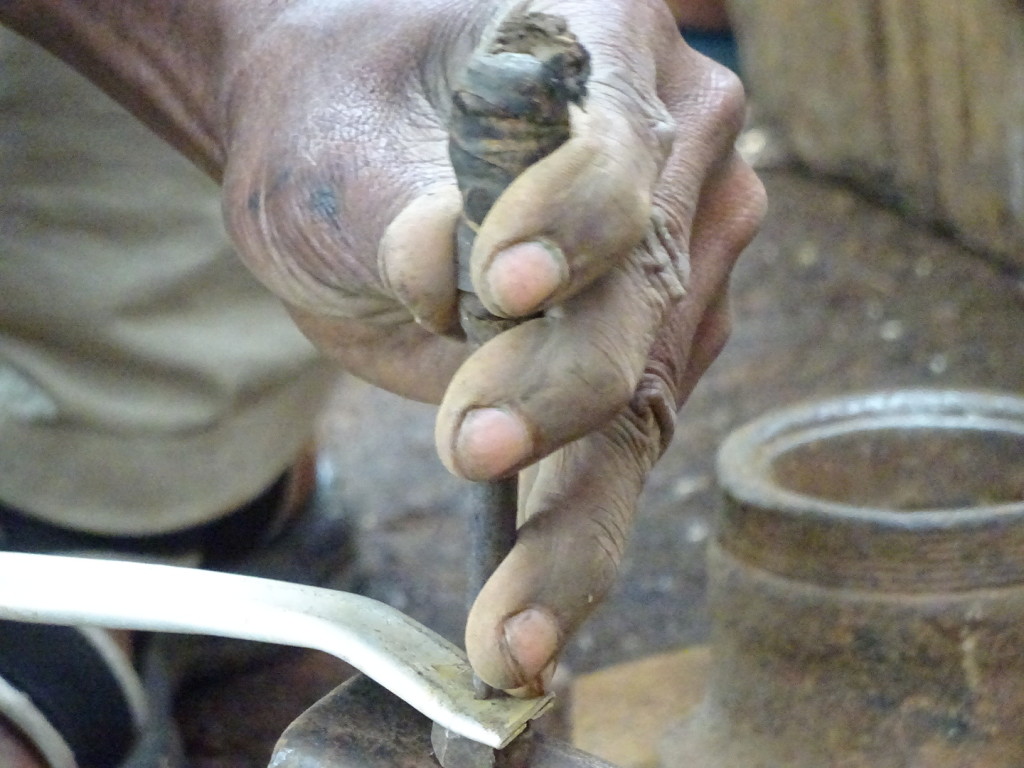 Punching holes in the handle to then rivet on the bowl. The punch is repurposed from a bicycle pedal center. 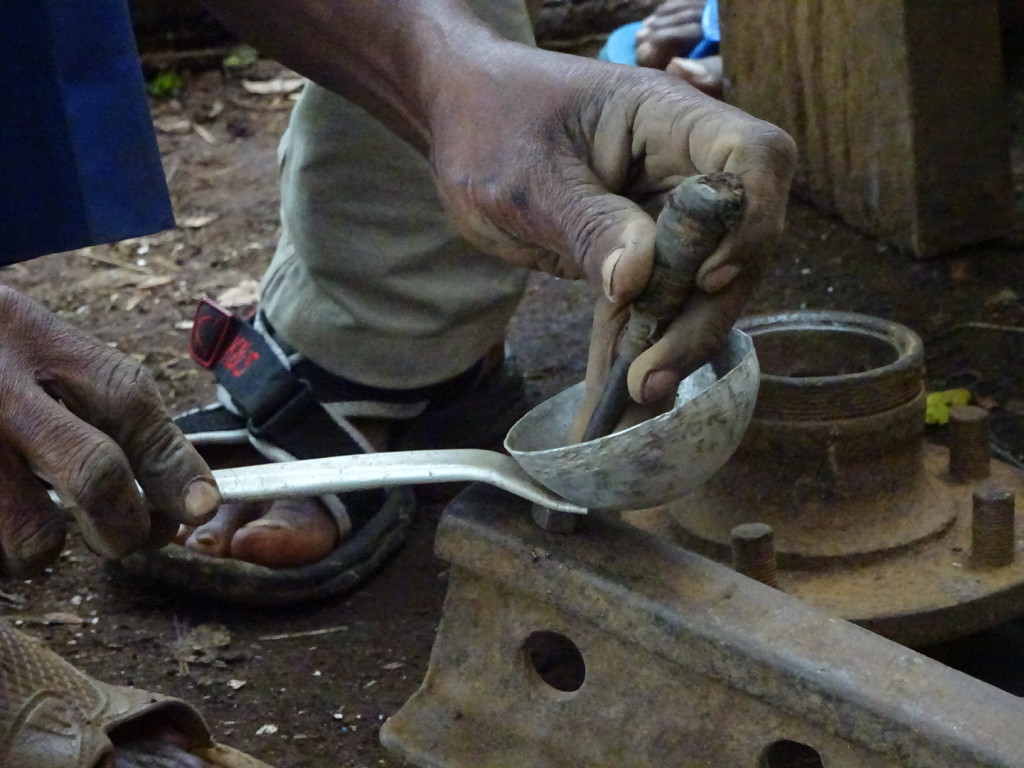 Riveting my ladle together. Underneath is a simple nut which gives the space for the rivet to be hammered on. 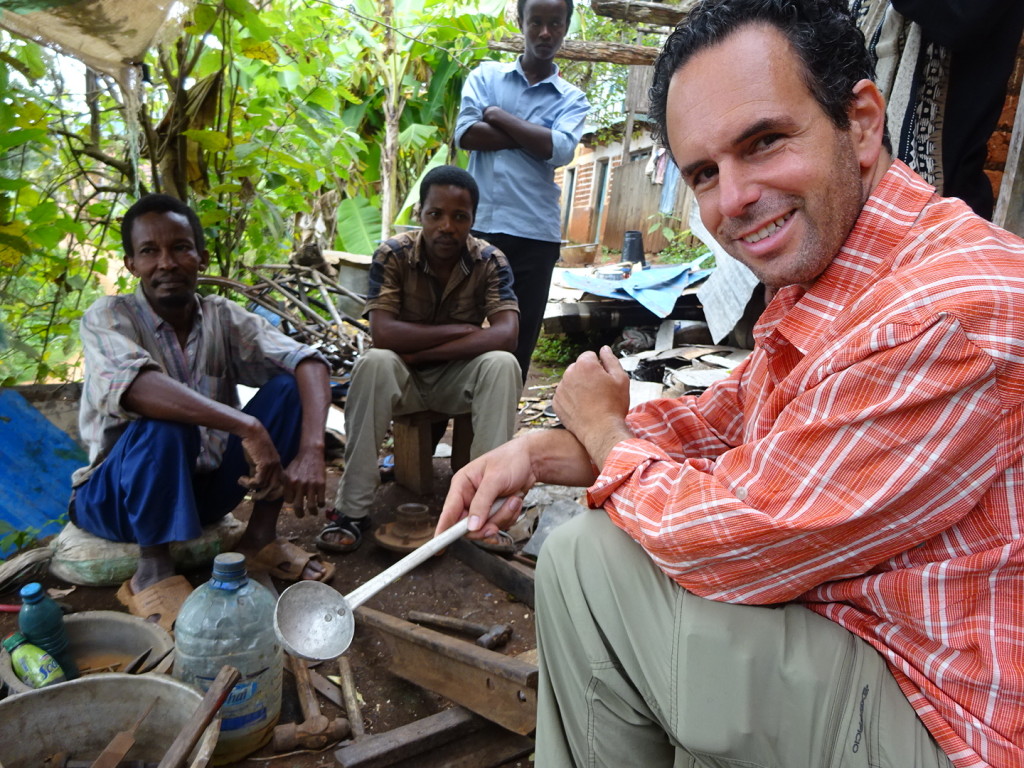 By golly, that’s a ladle, that is!

It’s not the cleanest piece of metal work ever forged, but it would certainly work to spoon out a delicious ladle of soup! I’ll treasure it as a memory of Nathan and the wonderful folks in the Pare Mountains. 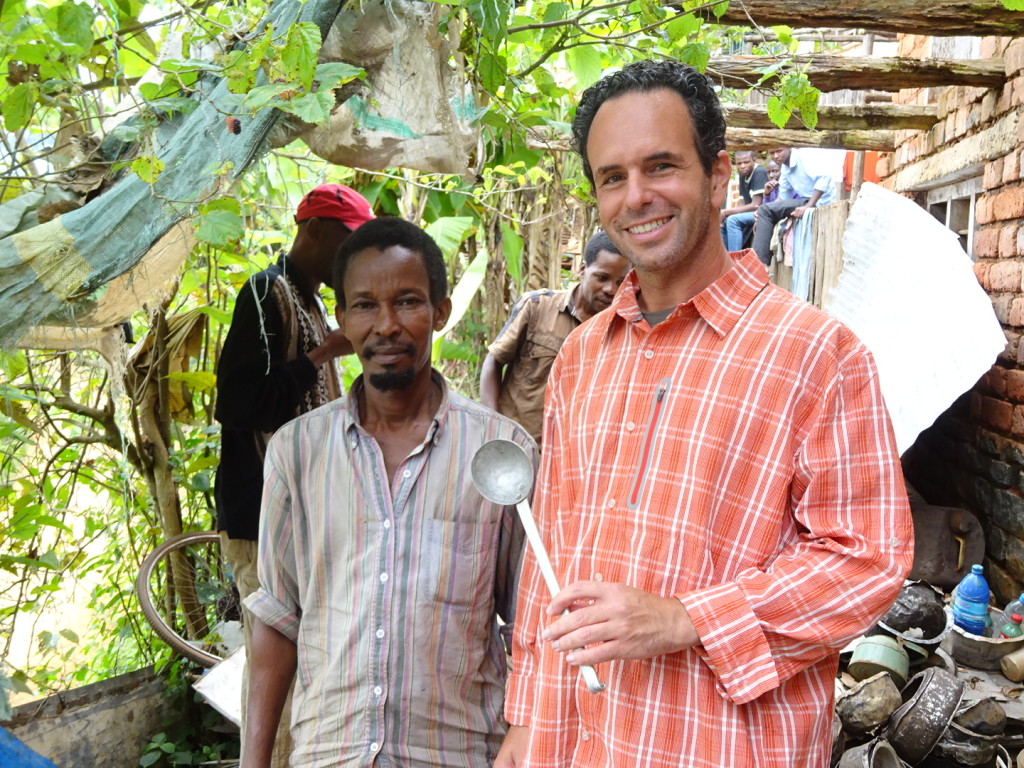 A teacher, a boy and his ladle.