First You Have To Get There: Africa in 57 Hours

To go on an African safari, first you have to get to Africa. For us, that meant the end of the South American part of our trip and leaving our new friends in Argentina. Sad, but the time had come! Our journey from Buenos Aires to Tanzania was a biiiiit more adventuresome than expected…

In Buenos Aires, Taylor and TJ came over to our apartment to say our good-byes. We gave them our extra food from the fridge and they bought back our left-over Argentine Pesos. Everything was perfect and as the clock ticked down to departure time I said, “Hey, we haven’t checked the flight status…we should probably do that.” Literally as we were standing up to get our bags we “Googled QR772” … and a little red “Cancelled” popped up on the screen. 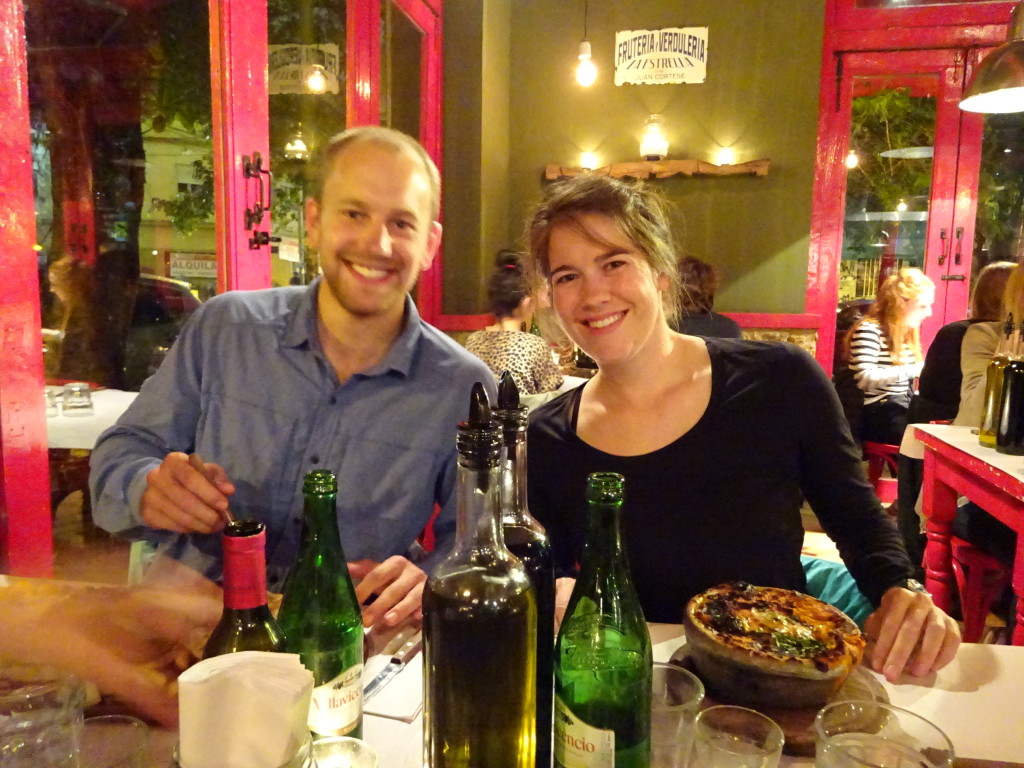 TJ and Taylor – our housemates at Juan Pablo’s and daily ice cream/dinner companions in Buenos Aires.

All four of us huddled around the little tablet screen. Aaron meticulously re-entered the number: Q R 7 7 2. Taylor leaning from clear across the big round table to view it upside down. Aaron read it again, pointing at every word, “Flight QR772. Buenos Aires to Doha via Sao Paulo. Cancelled.” Whatthewhat???? We all exchange glances. Just then, “buzzzzzz, buzzzzzzz….taxi’s here!”

We hesitated for one second and then immediately looked up the phone number for Qatar Airlines. We tried the US and the Argentine offices and both were closed. TJ started searching information on his phone, “Flights on TAM to Sao Paulo are still flying…$50, you could make it!….oh wait, it just shot up to $1,000.” Aaron worked the phone while I did some mental calculus to figure out just how much more were we willing to pay to not miss our safari?

Anger: Why didn’t we look at the flight staus earlier…WHYYYYYYY????? (shake your fist into the air when you read that part: WHYYYYYY?!!!)

We spent about 15 minutes on the phones and then Taylor, the voice of reason spoke, “I think you need to go to the airport and see what’s up…demand vouchers! It’s all about getting the vouchers.” I add, “and we better buy back those pesos from TJ….because who knows where we are sleeping tonight!”

“I can’t wait to read the blog about this!” were Taylor’s final words as we raced out to the taxi, waved good-bye and careened away. It was a harrowing hour as the taxi raced to the airport. Where there were three traffic lanes painted, the taxi and others vehicles made five lanes of cars. Turns out the lines are to be straddled, not driven between. I couldn’t watch. Our crazy-but-kind driver drove us right to the airport door, pointed exactly where to go and wished us luck. He also told us how we could re-hire him to take us back home. Eep! 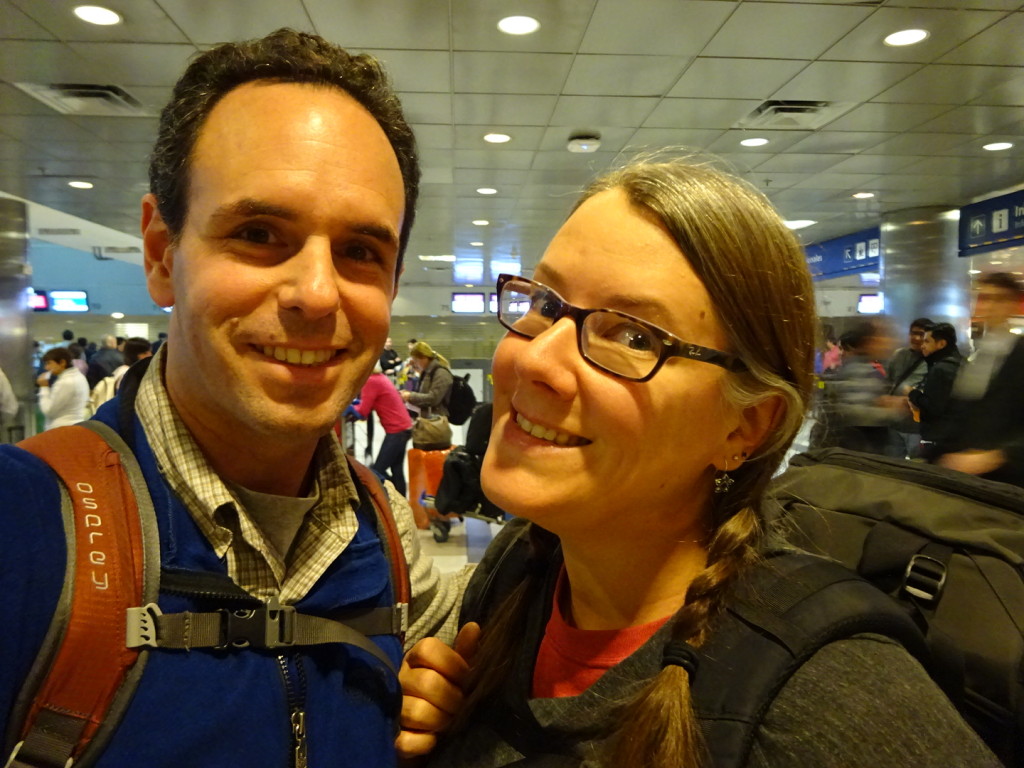 Confirmed: Flight Cancelled. Back to Buenos Aires. We could laugh or cry, so we picked nervous laughter.

At the Qatar check-in desk a friendly clerk met us and got right down to business: a charter bus would take us back to the swanky part of downtown BA where Qatar would put us up for the night, feed us every few hours — big huge buffet a la the HDR company party – and cover any additional expenses we incurred (i.e. the cost of changing our in-country travel). We’d then have the next day free in BA before a new bus would bring us back to the airport for the same flight the following night. How’s that for vouchers, Taylor!? Hope we made you proud! 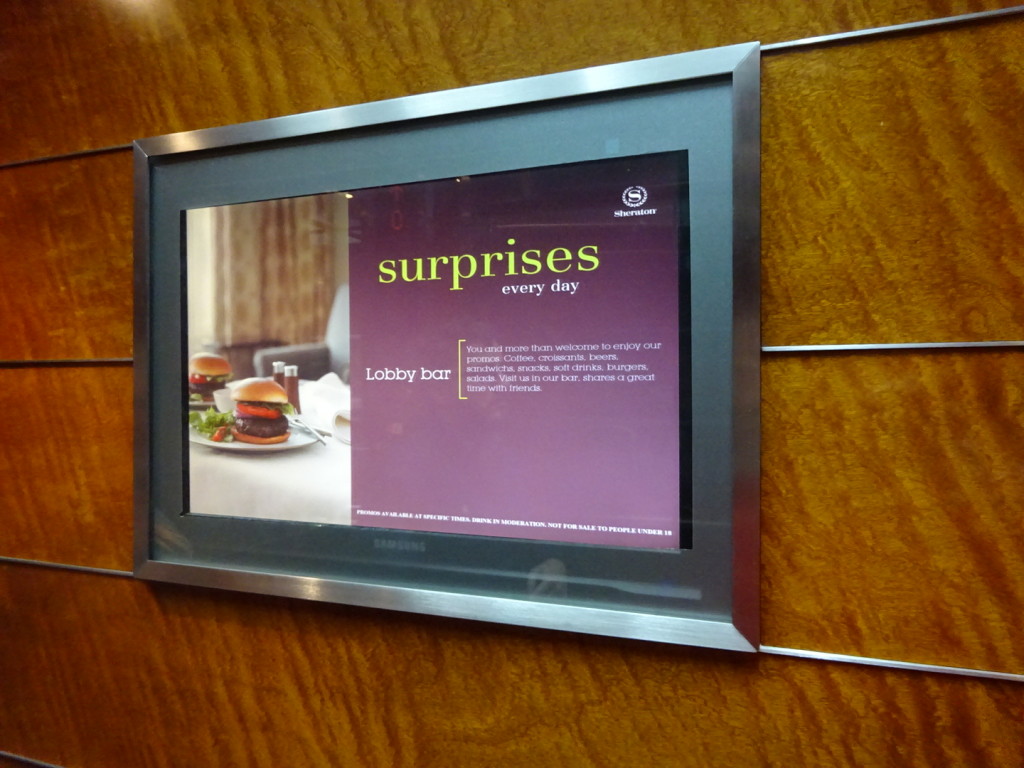 The first sign we saw in our lay-over hotel, “Surprises!” We had quite a surprise, indeed!

The delay was due to volcano ash clouds floating over from Chile. Yep, the same cloud that boomeranged Aaron’s mom a week earlier. Qatar’s was the only cancelled flight which seemed strange, but it might have been because the decision was made in Doha and not locally, or because other planes could fly low enough to avoid it. Anyway… better safe than sorry and luckily we had two days of “float” in our schedule to get to the safari. For now, we would be okay. 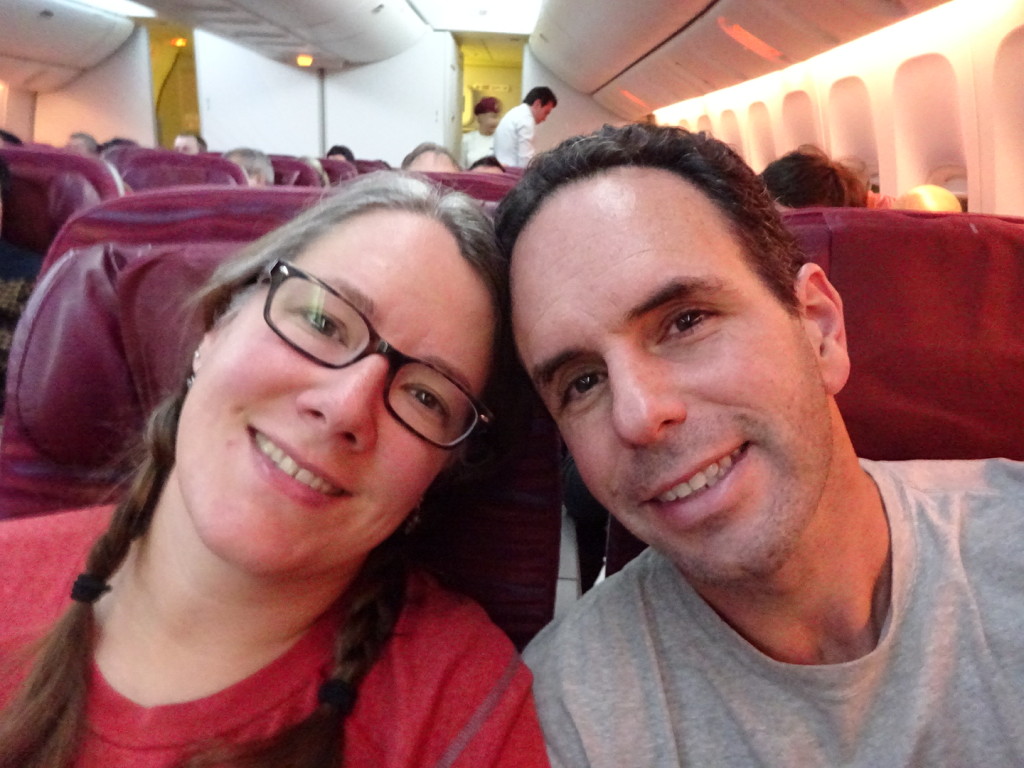 The flight to Dar! 27 hours late, but we’re ready!

The next day we report back to the airport and luckily the flight to Sao Paulo did take off, albeit a nerve-wracking four hours late. I was pretty sure we had a five hour lay-over in Doha, so once again we crossed our fingers. 16ish hours of flying plus an hour wait in Sao Paulo made for a looooong night, but they gave us Haagen Dazs ice cream for breakfast, or midnight snack depending on how you thought about it. Either way, Qatar has won me over.

Passing the full boobie/balls-grabbing-pat-down an hour later, we raced for the departure board which showed our flight status as: “Last Call”. Without a word, we took off running. Let’s just say we felt ‘not-having-run-or-really-exercised-in-the-last-six-months’ hit us hard! A Qatar employee saw us coming and started running next to us! Jogging along he called in our boarding passes, collected our passports, summoned a cart. Like Dukes of Hazzard, the man lept from the cart before it stopped and ran our passports and boarding passes to the desk while we trailed behind, gasping. They barely looked before pushing us out the door and onto the plane. We caught our breath. Every single person we passed I said, “Dar?” hoping to get on the right plane. And we did.

Momentary Relief. Followed quickly by, “hope the luggage makes it“.

The second we stepped on the plane we entered a new world. Just a few white faces. Traditional dress of all sorts. Our seats seemed to separate a large Muslim family and we felt a little awkward being outsiders in the middle. No, we weren’t in Kansas anymore, Toto!

As we flew, we saw Mt. Kilimanjaro from up high. The view was spectacular and that wasn’t lost on the tribe. Bunches of folks surrounded us to sneak a peak and were VERY excited to see it. All the cell phones were out snapping photos. One young man looked at me, “That’s MY mountain!” he said, pride oozing out. I was pretty sure I was already falling in love with Africa.

DAR! We made it to Tanzania!!

We arrived in Dar es Salaam and quickly made it through customs – way easier than I expected. We had been told that the visas area was total chaos, battle of the fittest and smelly. We lucked out! Maybe because it was sooo early in the morning it was Easy Peasy. Even better, as we waited a few minutes for our visas, I saw in the distance our luggage coming in. It DID make it! Thanks, Qatar!

Tired-but-Fine. Our final bit (6hrs) of waiting in the tiny Dar airport. 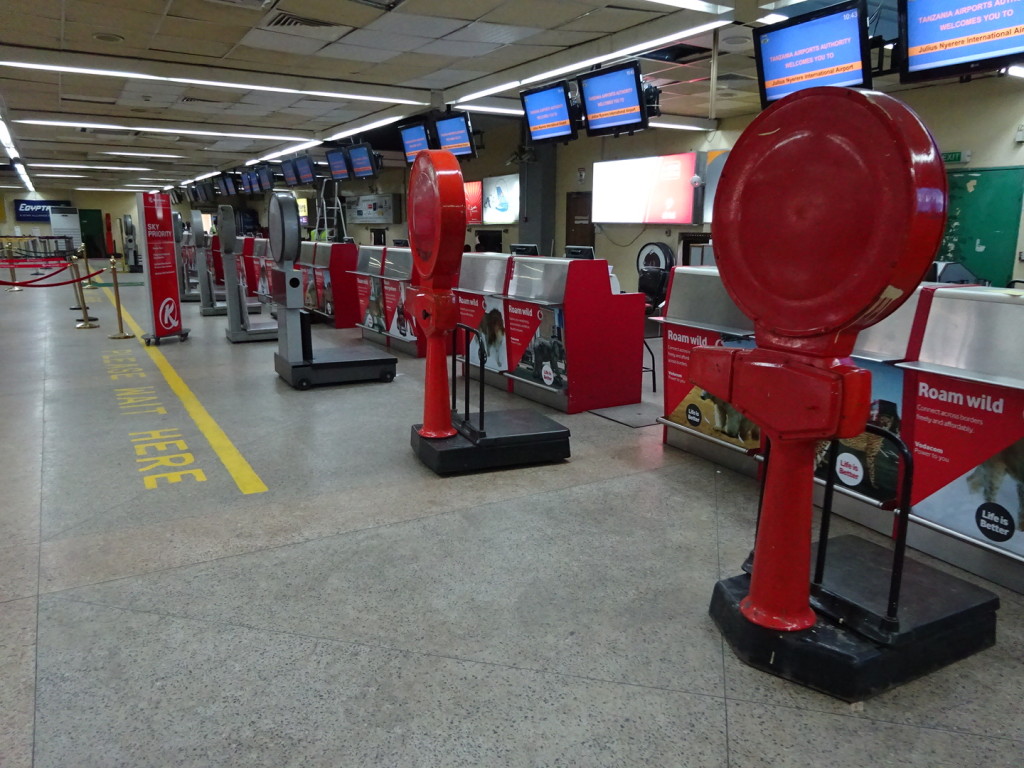 Love these scales in the Dar Airport. They take their baggage weight seriously here! 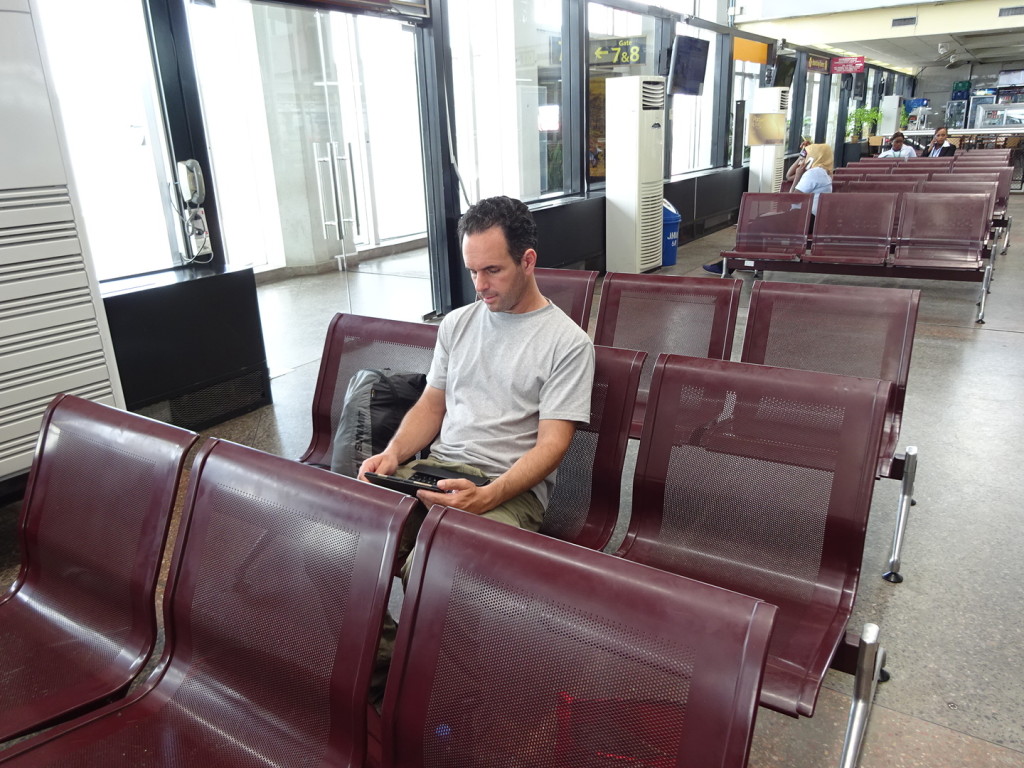 Just another six hours of waiting and we were on the easiest flight of them all. The wait wasn’t bad either what with all the new sights and sounds…even in the waiting area. Aaron talked to security who released him to the out-of-doors to buy us a coke, water and some postcards. Plus we had all the excitement of the up-coming safari and the total relief that us AND our luggage would make it. A puddle jumper then took us from Dar to Arusha, the safari jump off point. 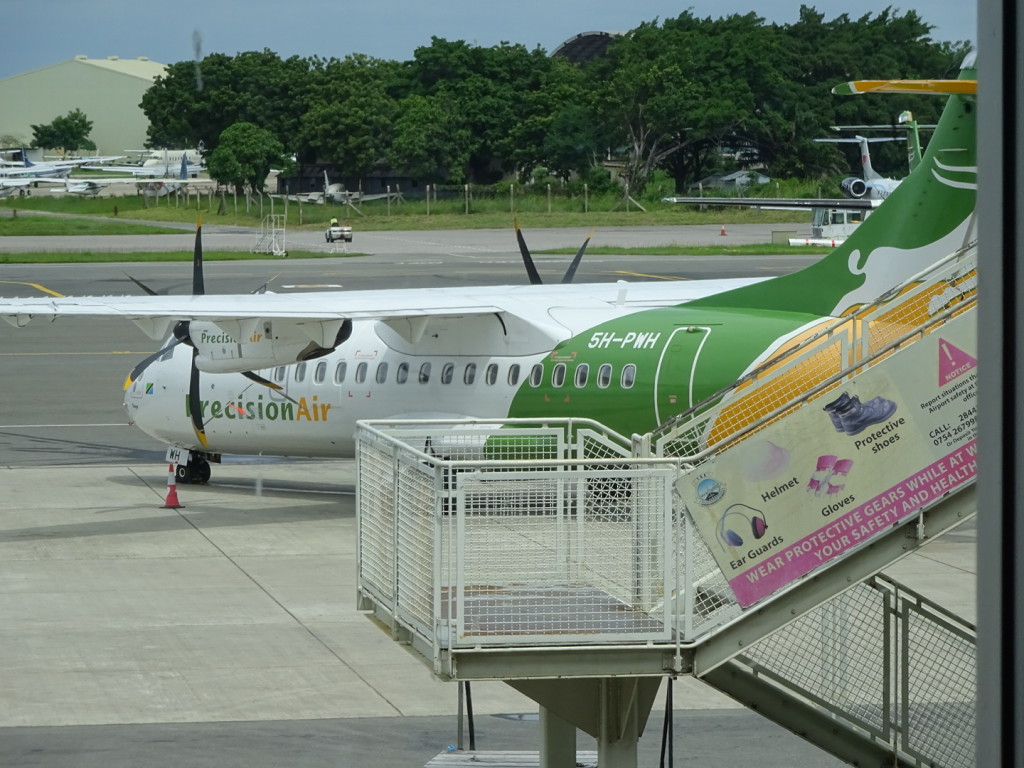 Precision Air to Arusha, at your service!

Our safari leader Brian’s friend Sophie was waiting to meet our plane. Mama Sophie is one of the all time nicest hostesses around. In Juan Pablo tradition she insisted on taking us out to eat, not just after our arrival, but also the next day for lunch. It was a truly wonderful way to be introduced to this continent. Jambo! 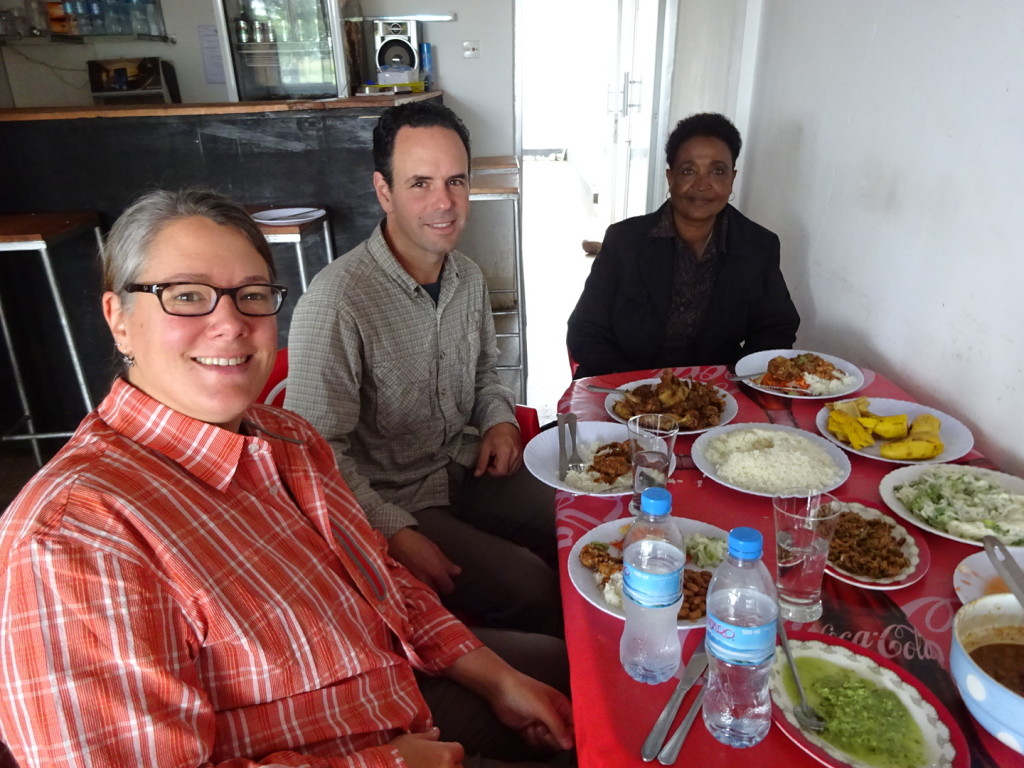 A delicious and amazing lunch with Sophie.

Finally…made it to our hotel. Dinner then sleep. 16 hours of sleep.

Totally exhausted, but totally worth it.