A few days ago we got one of those rare treats that you just can not plan on. It was a combination of being open to the possibilities, serendipity and dumb luck. We were in El Centro (the UNESCO World Heritage downtown area) walking down a cute cobblestone side street when we passed a little shop with copper creations and a man working at a bench. We hesitated, kept walking, then Aaron said, “Wait. I want to see inside.” So back we went.

What unfolded was really unbelievable. We were looking at the little copper sculptures when I confirmed that Aaron had already told the shop owner that he’s a jeweler. “Tell him you do sculpture too!” I insisted. The man, Marco, stood up and took time to show us all of his art. A chainmail shirt and headcover made of carefully woven metal, woven baskets, miniature bicycles, kitchen stoves, flowers and butterflies. The common theme being that it was all handmade from copper…right there in front of our very eyes. 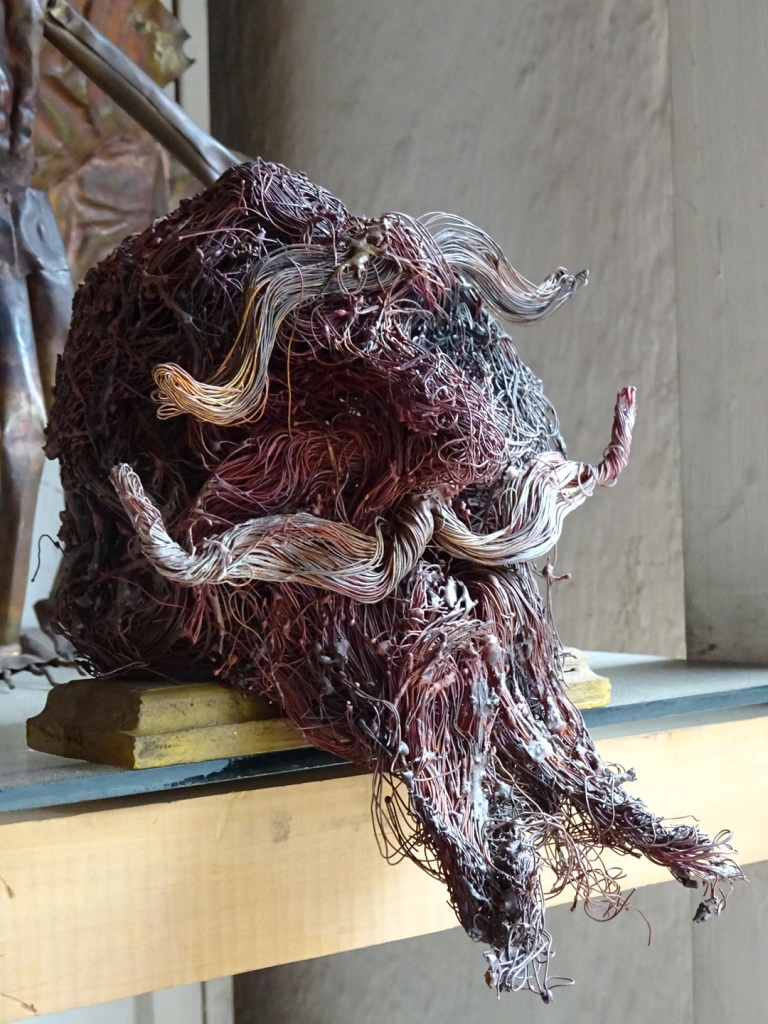 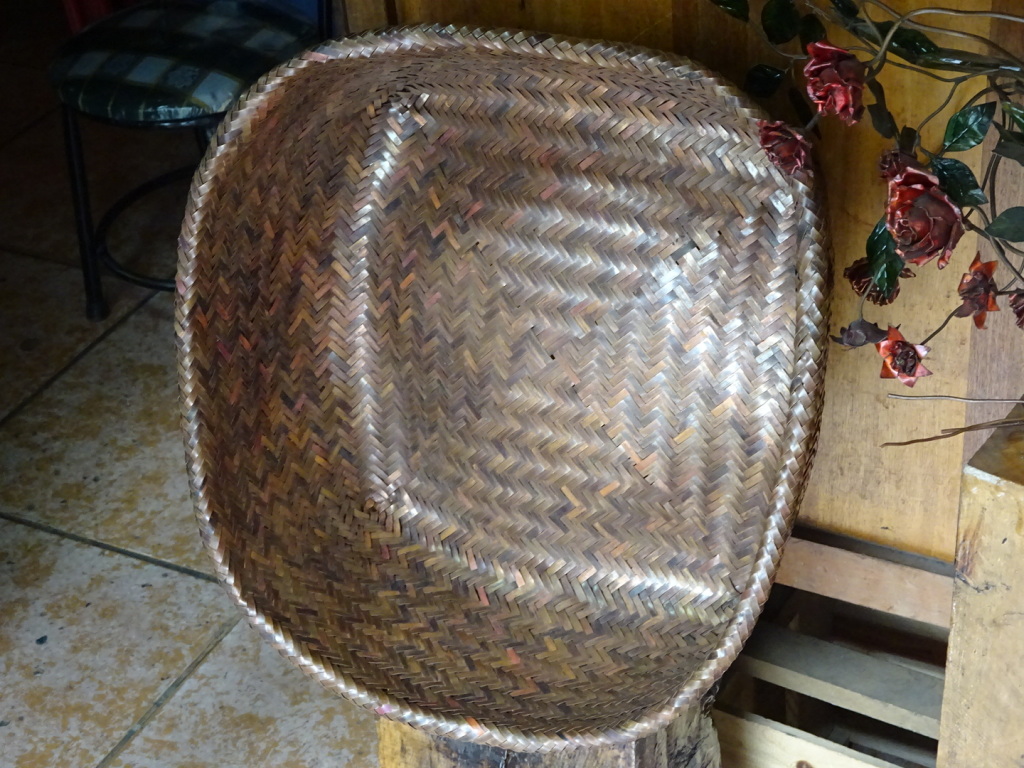 This basket is woven from perfectly flattened and sized recycled copper. (About 12″ in diameter.) 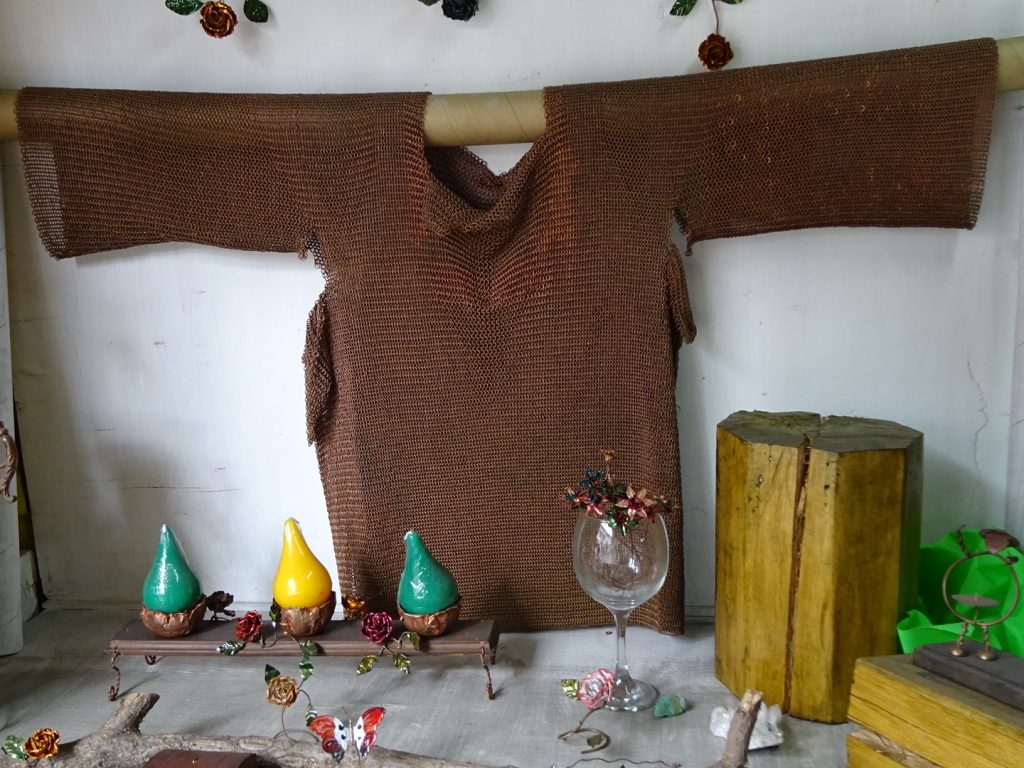 Copper chainmail shirt! Took a LOT of little rings to make this guy. 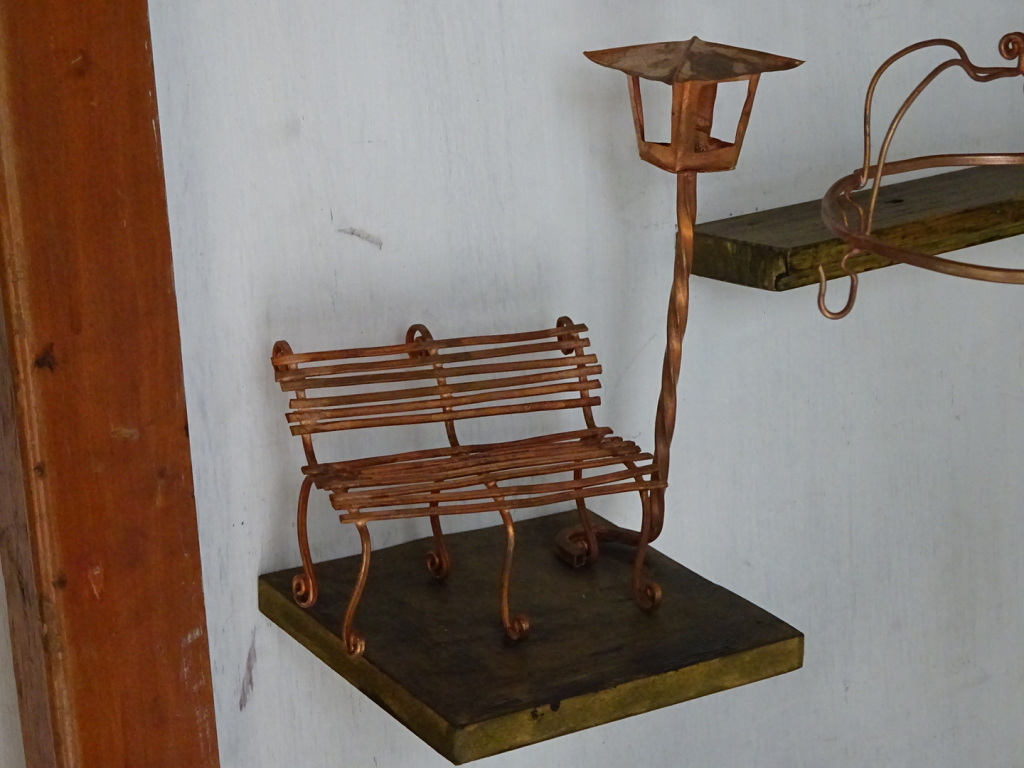 Example of some of the miniatures Marco makes.

As I looked at some punched pieces of copper, Marco asked if we had time and he’d show us how he makes a hummingbird. So right there, he got out the soldering compound and a torch and went to work. His bench looks pretty similar to Aaron’s bench. The torch was bigger and badder…but basically the same as Aaron’s. I could tell Aaron was pretty comfortable hopping back there to film the creation! There they stood…two artists admiring the work. 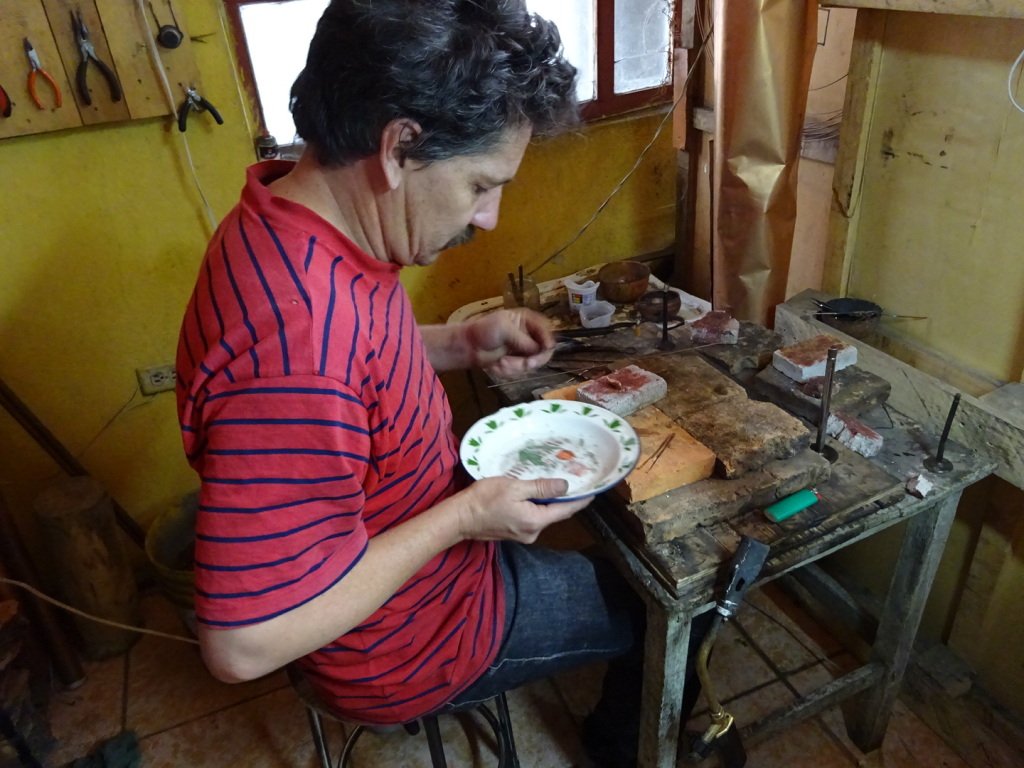 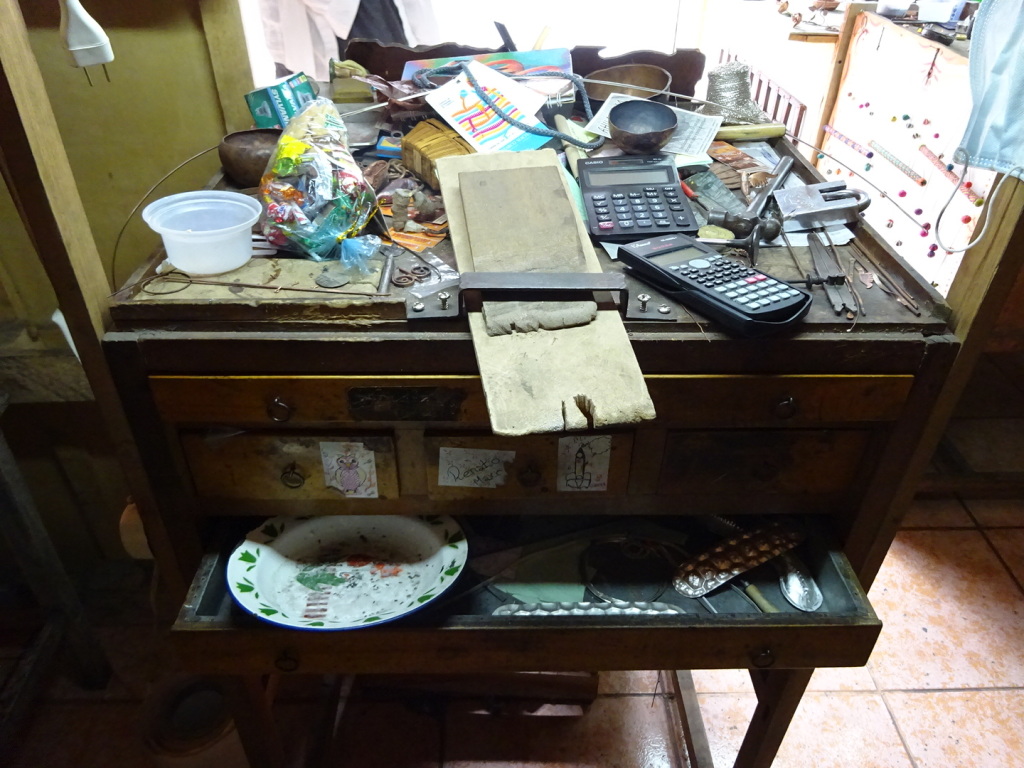 One of Marco’s workbenches…cluttered like so many an artist! 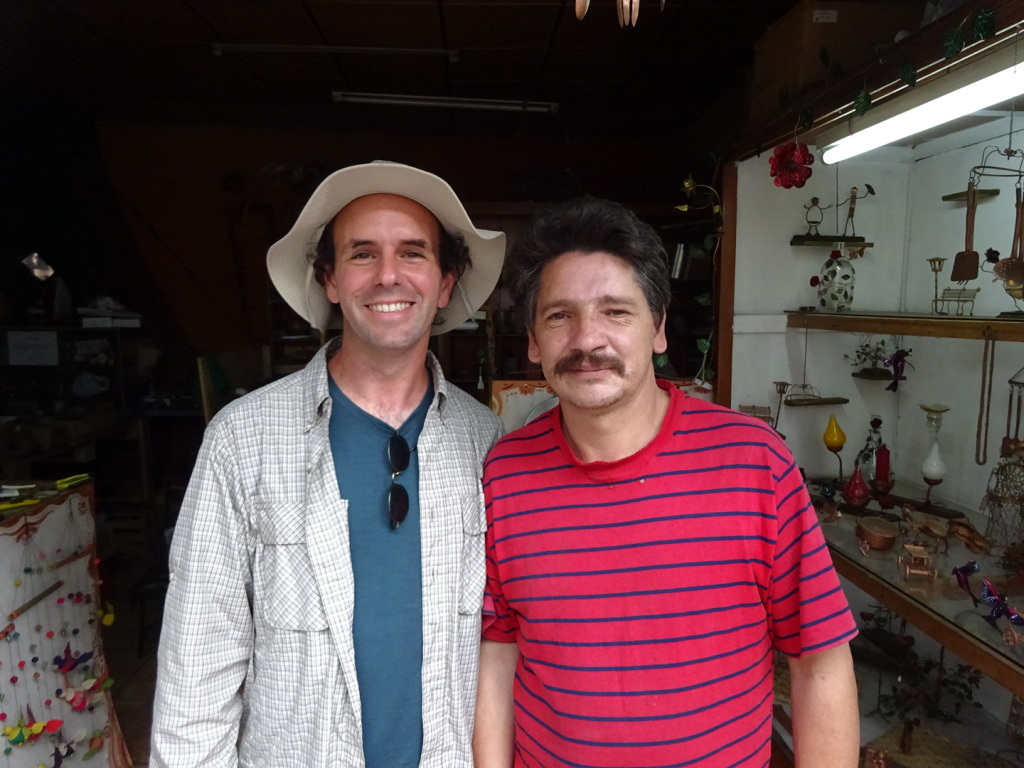 Aaron and Marco in front of the shop. You can see the display of miniatures on the right.

Just then another gentleman walked in. He was there to sell recycled copper wire to Marco (we knew it was recycled as he also had a big coil of electrical wire that he hadn’t stripped the covers off yet!). He waited patiently as Aaron got a lesson in soldering then shook our hands and bicycled off after we all gave the universal sign of approval – a big smile. Marco and his father re-purpose copper wire and pipes and any other copper they can find — So, before they even start a project, first they find copper pipe, then they painstakingly cut it down one side, flatten it, get it to the right thickness (Aaron thinks they may have some sort of press or rolling mill, but we didn’t see it) and THEN they can start to make their creation. Can you believe that!? 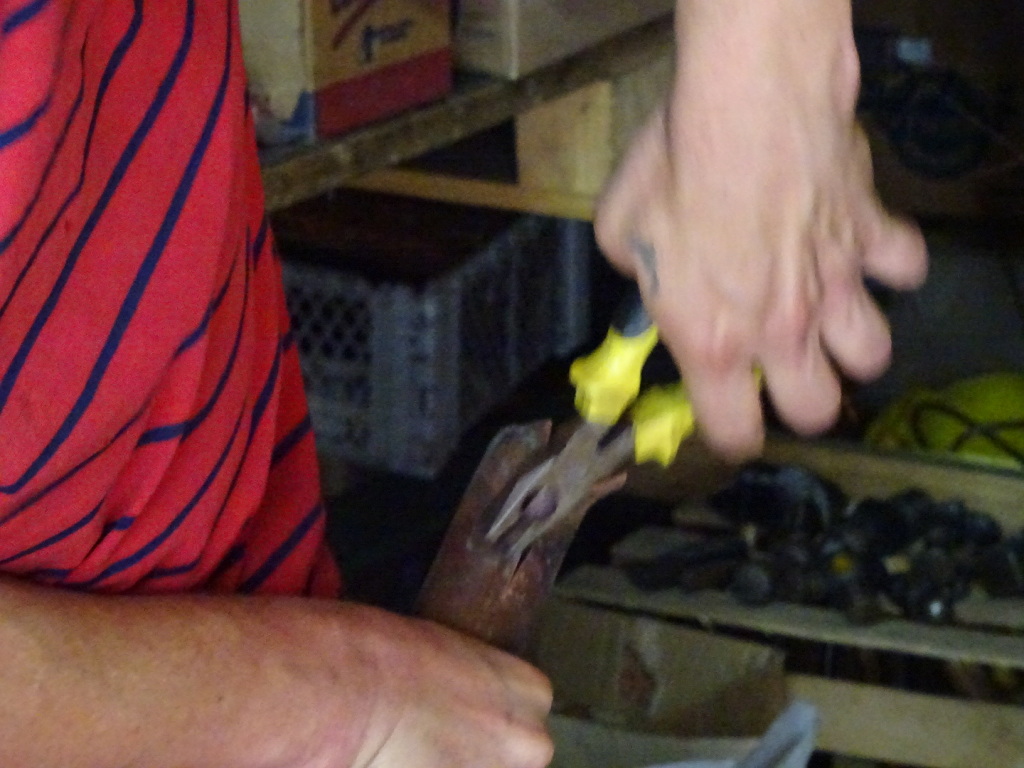 Marco showing how he cuts heavy copper pipe to then hammer flat before he can use it to create with.

After a good long time in the metal studio, and after meeting Marco’s incredibly polite sons (they made sure to shake hands when they met us and when they left!), Aaron and I looked at each other and knew we had to buy something. It would be our first souvenir of the trip. We have no idea how to get it home, either. We’re hoping we can find a place where we can reliably ship it, but Ecuador apparently isn’t that place! We hemmed and hawwed forever, but eventually picked these little miniature kitchen utensils. We thought they were representative of Marco’s work and that they would look cool in our house. More than anything it will be a reminder of this wonderfully unexpected stop on our way. 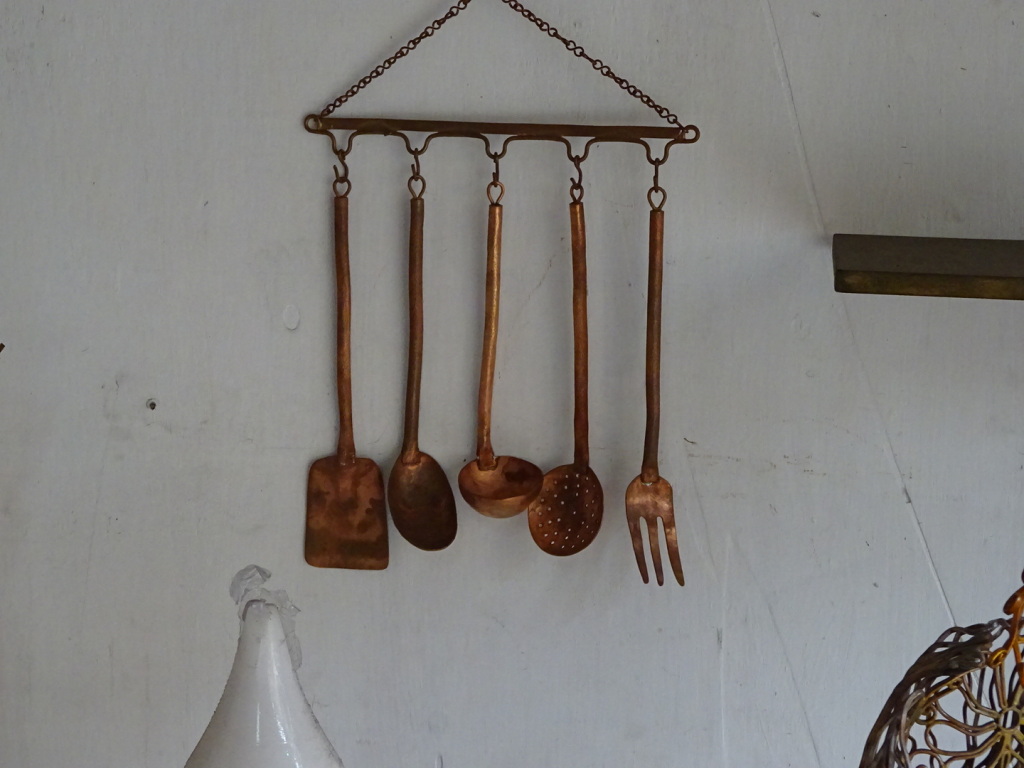 These are ours now. Marco made them in a whole variety of sizes including teeny-weenie. Ours are about 6″ each.

You can see more of Marco’s work on his Facebook page: www.facebook.com/ahuacuna

And, for all of Aaron’s metalsmith friends, here are some quick videos (sorry they aren’t the best quality):

Forging a Copper Bowl – check out the tree stump with the hand-chiseled dapping holes! 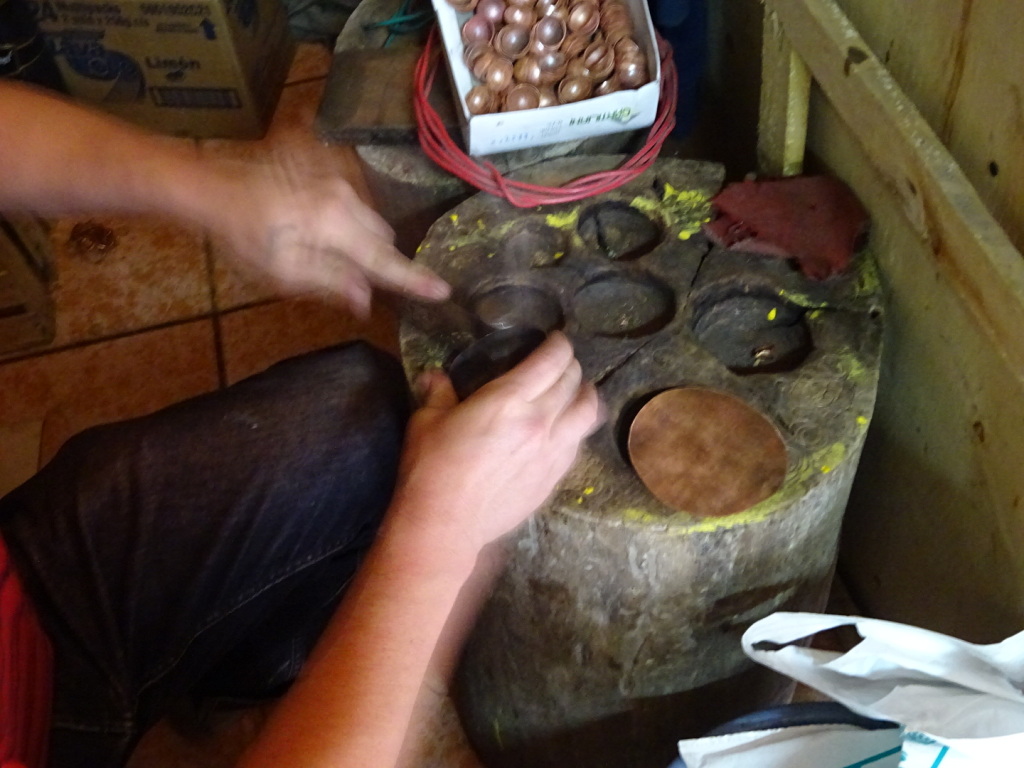 « What’s in a Resolution??
Street Art in Cuenca : A Quick Post »