We have to start this post with our apologies to Panama and Panamanians – I think we came into the country with really high expectations, but not the planning or budgeting to let us do all the amazing things we could have done! So we kept finding ourselves saying “This is nice, but not as amazing as we expected.” Really, though, that was our fault, not Panama’s! We should have done more than spend 10 days all in Panama City. The Cinta Costera, a long, paved, lit walk along the waterfront, is truly, truly wonderful and I wish there was a similar place at home in Seattle. We spent hours every day walking it and never got tired of it! Aside from that and our day of exploring art galleries in the San Francisco neighborhood, the best parts for us were the little things. Here’s a post on some of the magical, little moments of Panama City.

On our first day here we were walking around a well-to-do neighborhood, in front of a fine looking academy when a minivan pulled up. Out jumped a mom who hussled her little pre-schooler out, a yarmulke clipped to his head and on the polo of his uniform the words “Mitzva Tots”. We pass them and I lean over to Aaron, “Who knew?!” I assumed being Catholic was a requirement in Central America…except for a few Jehovah’s Witness rebels, who I assume are actually not from around here. Aaron whispers back, “We’re everywhere!” I think we both assumed it was a fluke, but since then we really have seen Jews all over Panama City. “Mitva Tots” has become our code for “Hey, look, more Jews where we didn’t expect!”

Anyone who knows me knows I hate raccoons. They are horrible giant rodents that act like they own my city (sometimes blocking my way out of my own driveway on the way to work), capable of killing dogs, and generally living out their lives in pursuit of scaring me. Where I grew up, you just killed ’em. I even went coon hunting as a kid (my only hunting experience.) Once one showed up in the back yard in Seattle just a few feet from me and Aaron. I screamed “get the gun!” and ran for the house. Aaron sauntered behind me, “we don’t own a gun…’ Details.

A few days ago we were sitting out on the waterfront (love that Cinta Costera!) when what should appear… a racoon! A scrawny, ugly, get-me-a-gun coon. As fast as she appeared, the Panamanians started to pose with it! Walking right up to it! Putting out their hands trying to pet it! Putting their toddlers next to it for a picture. I yelled, “noooooo – dooooon’t doooo thaaaaat” and put my hands over my eyes. This scene played itself out over and over again. As we left we saw them… the litter of baby coons behind her and more people snapping pictures up close and personal. One word: Yuck!

Pikes Place Market has nothing on the Panama City Fish Market. Rows and rows of nothing but happy fish mongers and fish neatly stacked in a row. You buy your catch of the day, walk it up stairs where they cook it however you want it (or take it to your restaurant or home and cook it yourself, I guess). That part was pretty cool, neat and tidy. We actually walked throug the fish cleaning area though – which was as gross as it sounds.

The whole place is surrounded by fast-food fish stands. If you are familiar with Seattle, it is like the walk-up Ivar’s stands – one after another; each with a pretty lady encouraging you to buy your fish-fry or ceviche at her stand. The place is packed with locals and tourists. The down side — man oh man does that place STINK….like rotting fish guts and trash. We decided we didn’t need THAT authentic an experience and made our way to a brew house where we split a pizza, far from the wafting scent of the fish market. 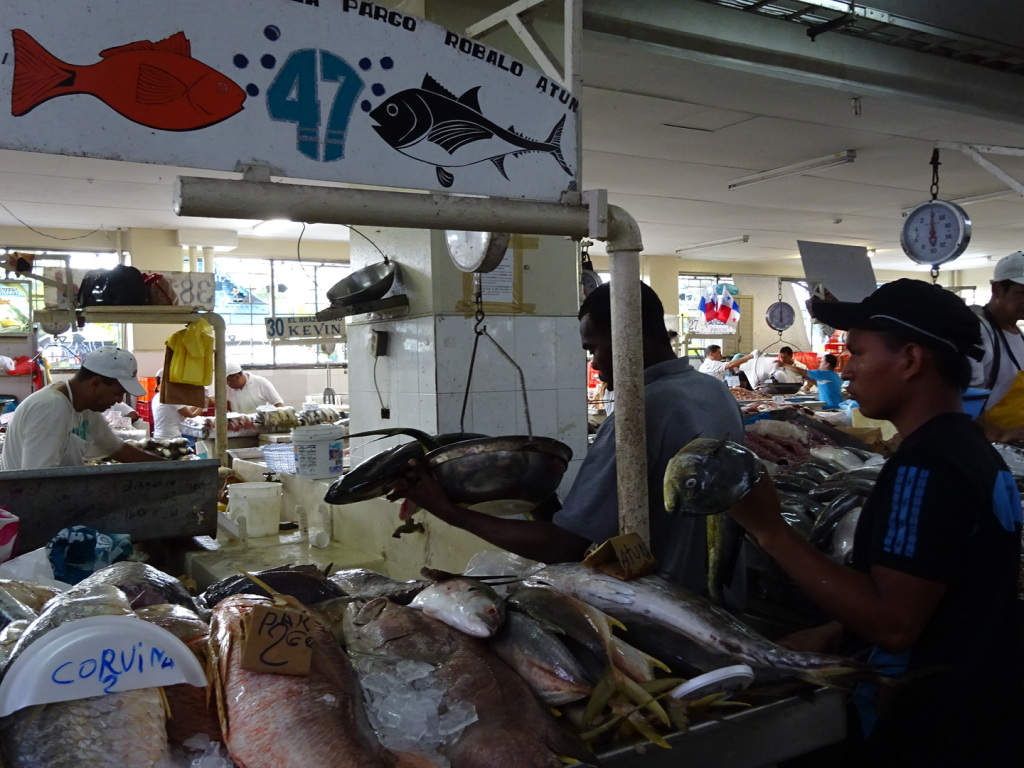 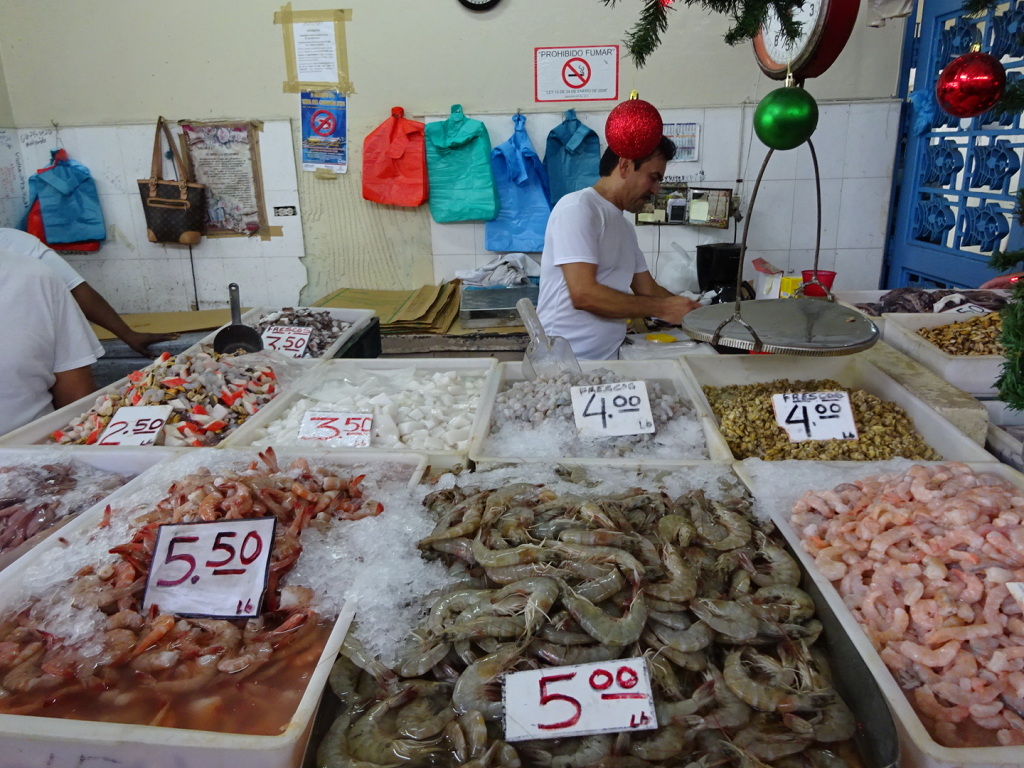 A view of one of the stalls.

PELICANS IN A TREE

We already posted a YouTube video, but it is worth noting again: we saw a tree with about 40 pelicans swooping in to roost for the night!! “Pelicans roost?”, you might ask? Yes they do! They are HUGE and the tree was packed with them. It was the strangest thing – but very cool! 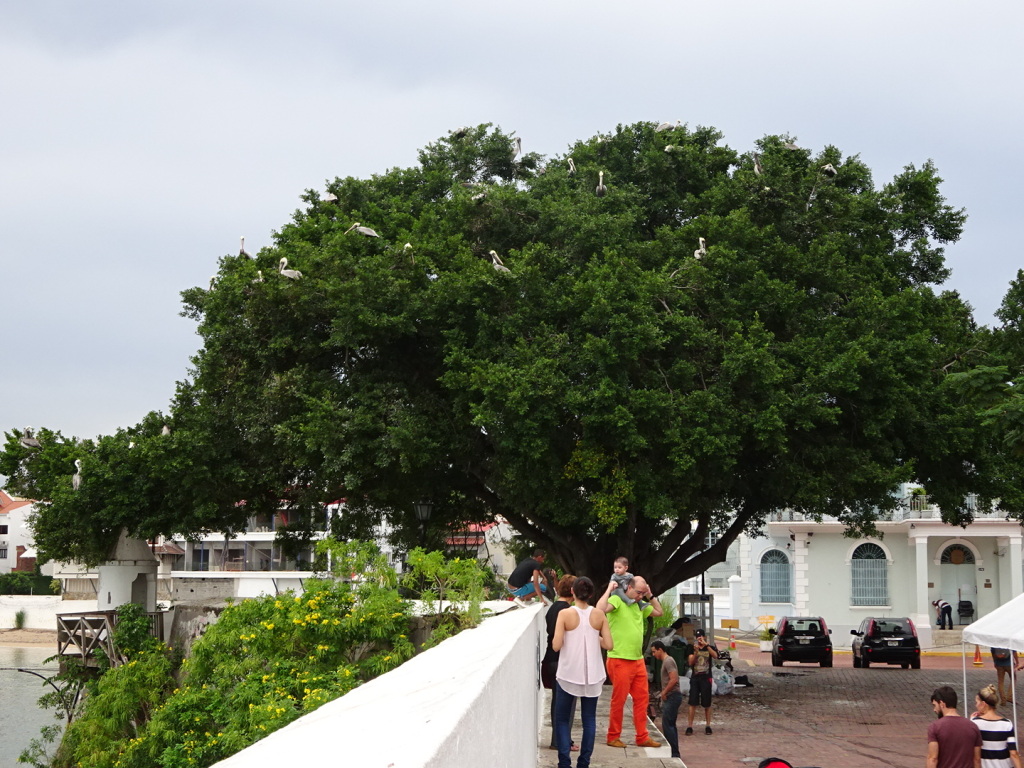 Those white dots in the tree? Pelicans. About forty of them. 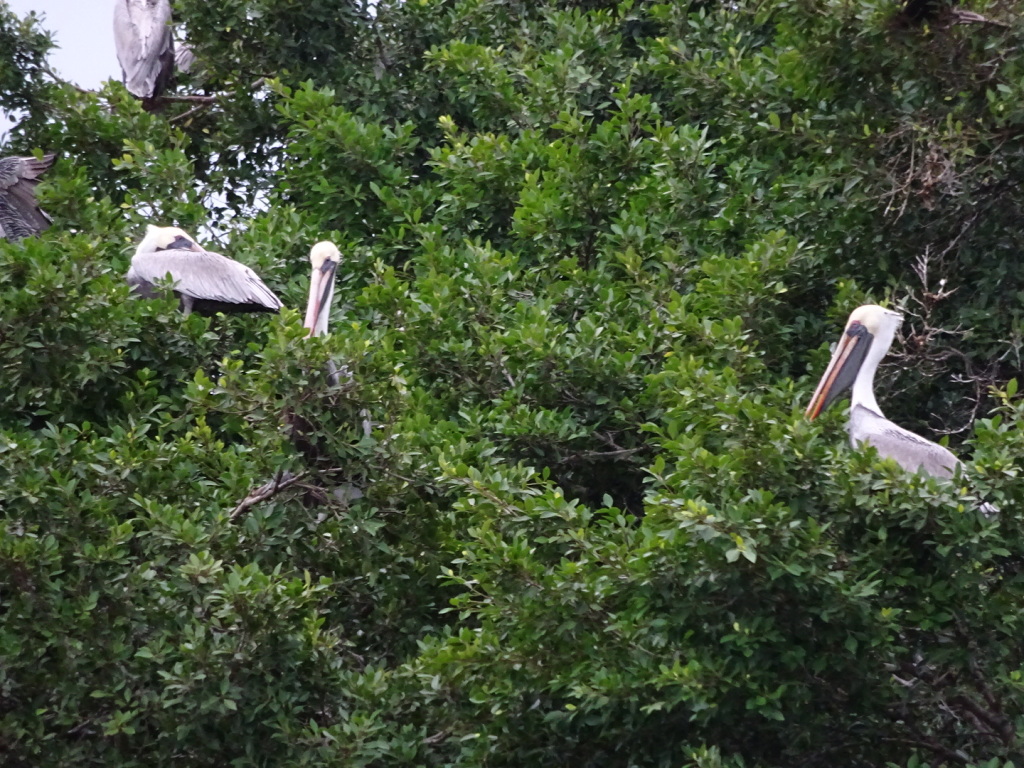 See? I told you: PELICANS in the TREE! (crazy!)

From the moment we arrived we have been watching street vendors deliver snow cones to young and old alike. They roll around a GIANT block of ice and use what looks like a specially altered wood planer. As in, if you were smoothing out a piece of wood you would use this device, except this tool is designed to catch all the ice shavings into the cone. Then they put a big gulp of colorful, sugary goo over the ice and top it with some sweetened condensed milk. Everything in Panama is super salty or super sugary. I guess the big gulp of sugar water isn’t enough so they top it off with the sweetened condenced milk. We finally decided to get our snow cone – sans the milk – and you can see it being made on the video! The flavor is a non-distinct sweetness. We couldn’t tell what flavor was intended, but we are pretty sure if fuscia had a flavor, this was it. Like much of Panama, it dissappointed us a bit, but we are in LOVE with the ice shaving tool! Watch for yourself, here is the video.

Since things are a bit expensive, we have been trying to take advantage of things that are free to the public. That is how we ended up at a community (mainly children’s) Christmas concert in the park. It was big doings here in Panama City! There were local celebrities hosting the event, the press, deputy mayor, representatives from various embassies, and Peace Corp volunteers in attendance. And a big thank you to Canada for under-writing the event. (We didn’t quite understand why they were sponsoring, but there you have it.) We watched a cute, cute, CUTE kids’ choir in their school uniforms and Santa hats. They sang of dreaming of a white Christmas and I can’t help but wonder if they have any idea what that means. After those kiddos we had enough Christmas spirit and headed home. 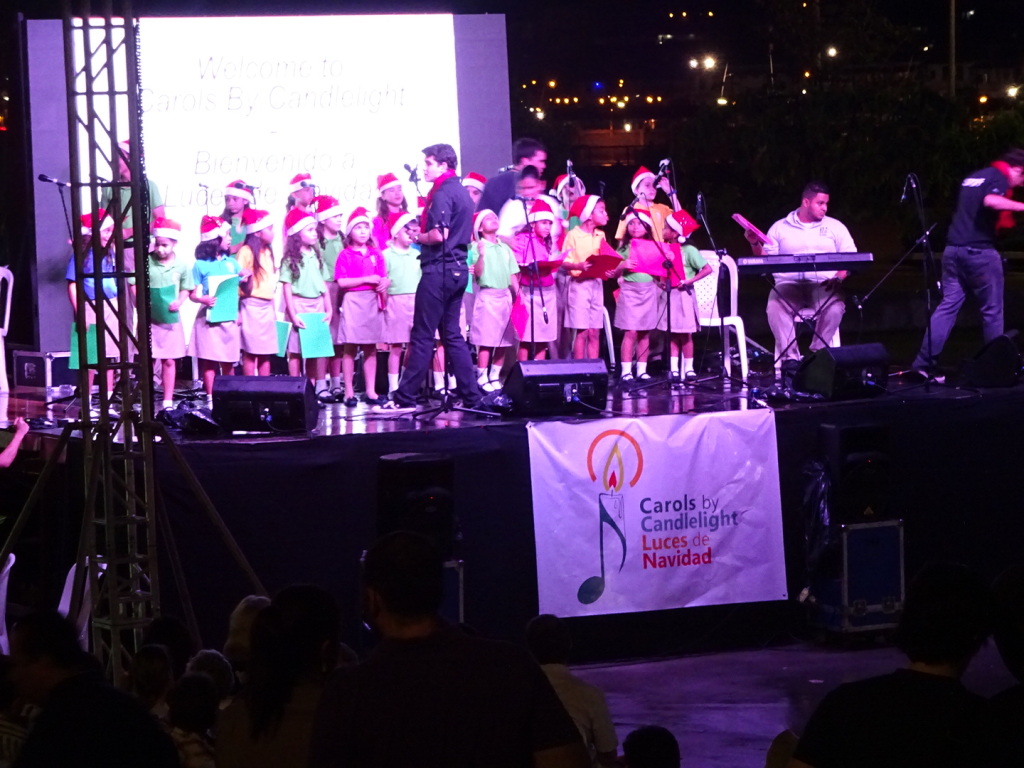 Dreaming of a white Christmas!

The next night we stumbled upon a moonlight drum circle…and were they jammin! I insisted on stopping because it was the first time since we left home that I spotted fresh made popcorn! (Just writing this makes me want to have popcorn!) We HAD to eat popcorn and watch the drumming. They were jamming to classic rock like Pink Floyd and Eric Clapton played live. Let me just say, it is impossible to just sit at a drum circle and not feel like a goof, so as soon as the popcorn was done, we grabbed buckets and sticks and sat down. The front man would cue us on the rhythm he wanted and we tried to replicate it. We think a bunch of enthusiastic high school drummers were behind us and they carried the crowd.

Aaron in the Drum Circle: Boom-Chaka-Boom 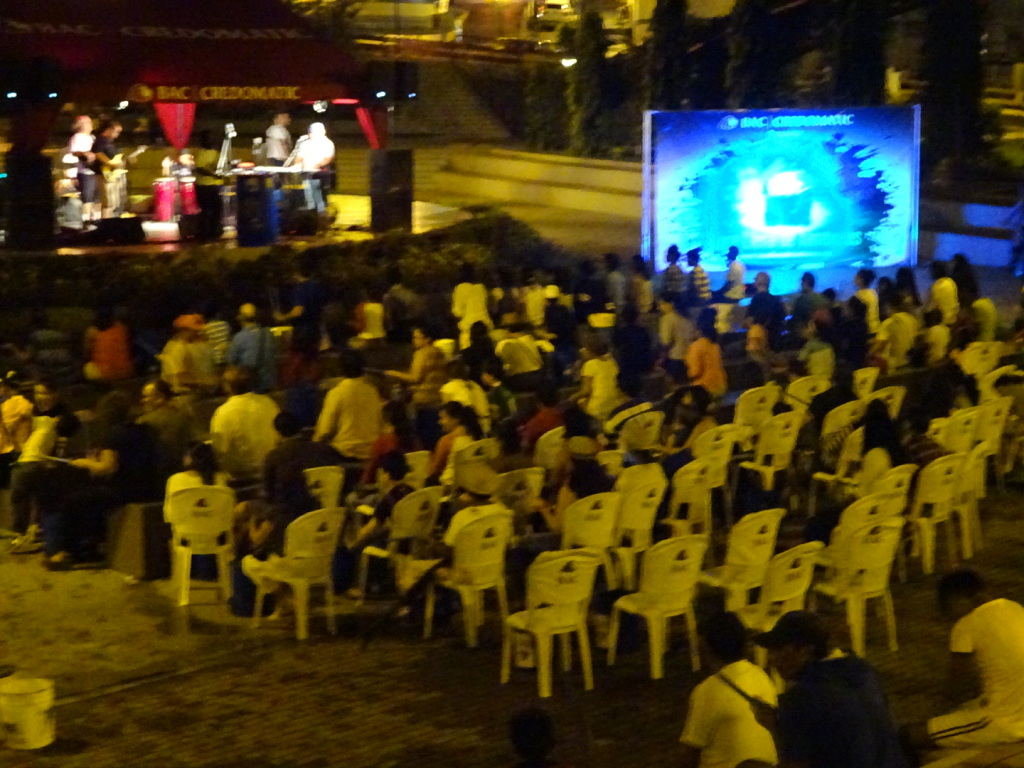 Drum Circle — and this went on for HOURS!

Panama City has some really cool architecture. It could be argued that maybe a little more money should go into some basic infrastructure, like say water and fish market trash removal. That aside, we have seen some really cool modern and historical buildings. 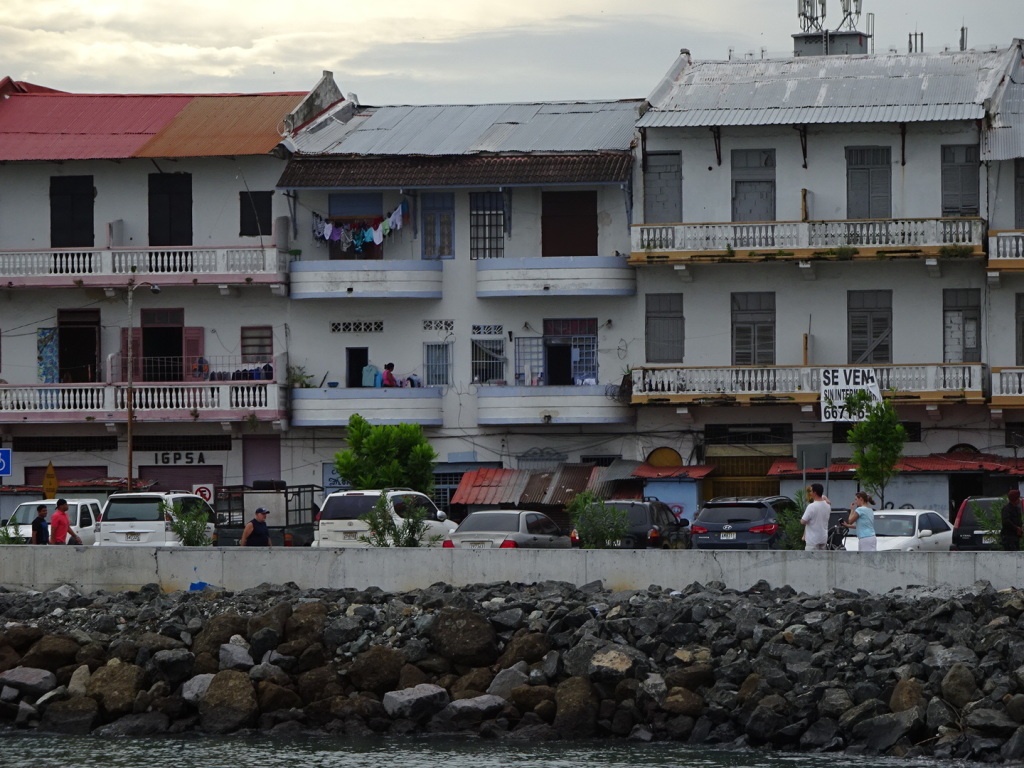 Fringe neighborhood in Panama city. Certainly not the poorest. 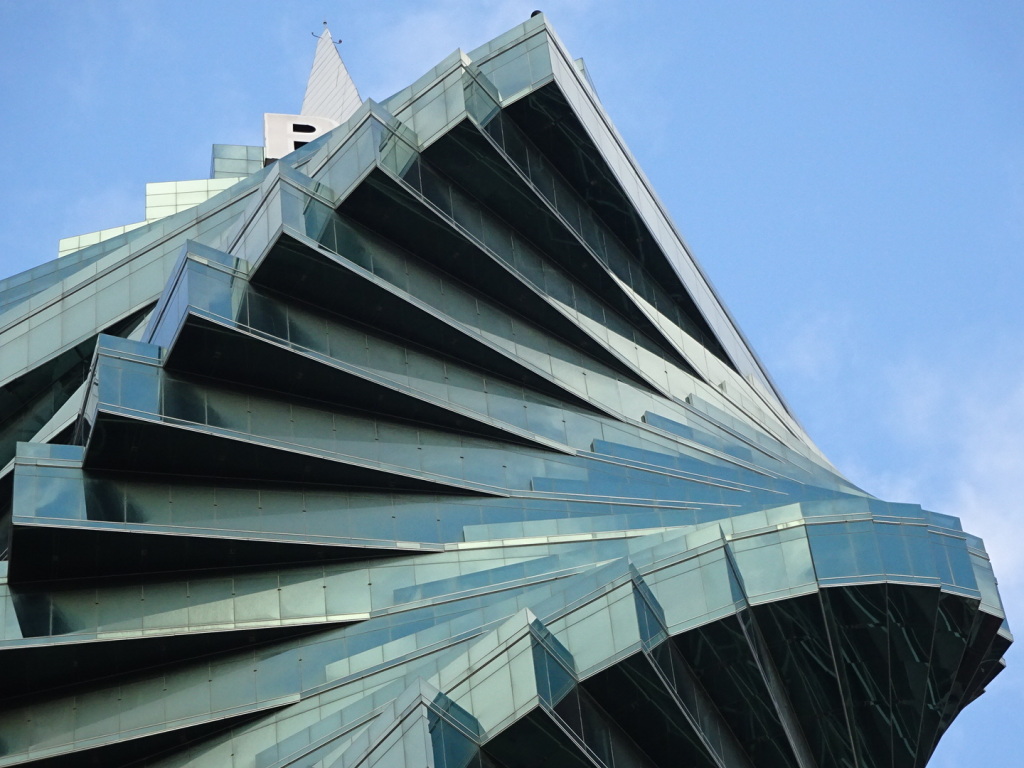 This crazy building was our landmark for finding our way home at night. Our street was a couple of blocks away, but if we could find the zigzag building we could find our street!

A totally modern sky-line – taken from the Cinta Costera.

Aaron makes fun of my reaction to bridges. We walk over the smallest plank of wood over a 2″  deep creek and he sarcastically shrieks, “A BRIDGE!” One day he surprised me when he said he really wanted to see the Bridge of the Americas….’Because it’s really a beautiful bridge…and I know what I like’. He was right! It IS a beautiful bridge…that thankfully holds Central America to South America. It was built in the early 60’s by the United States for about $20M and crosses the Pacific side of the canal. It is about a mile long, cantilever design with a tied arch (yes, I looked that part up online). 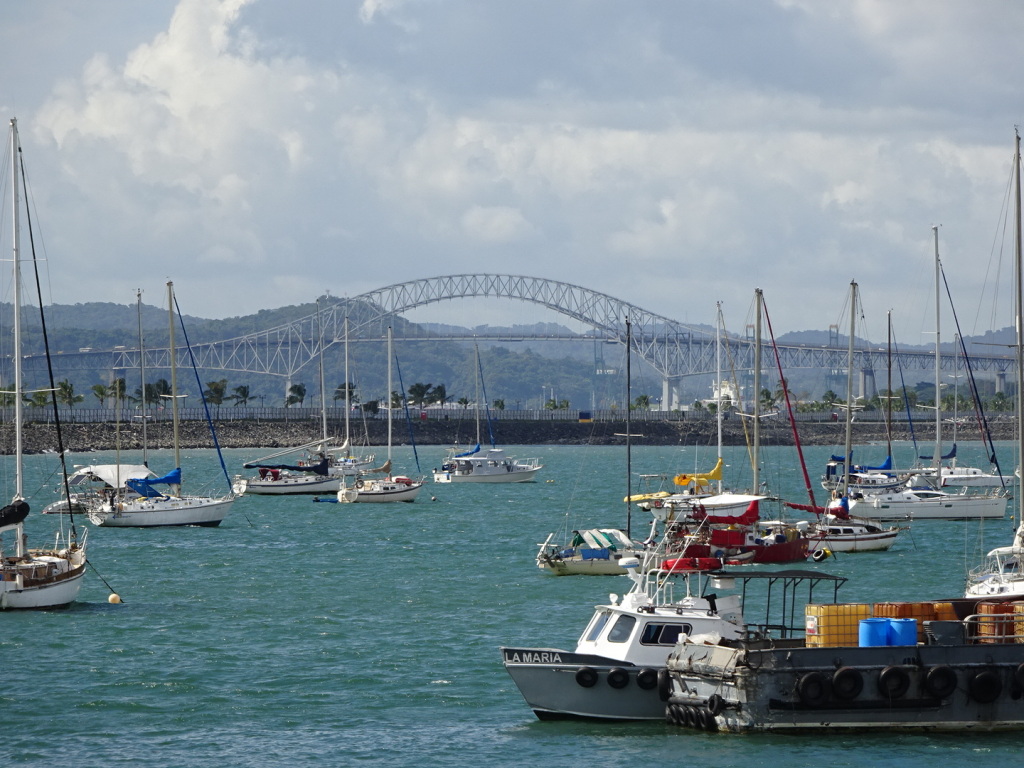 It IS a beautiful bridge! This is my favorite picture of the Bridge of the Americas. 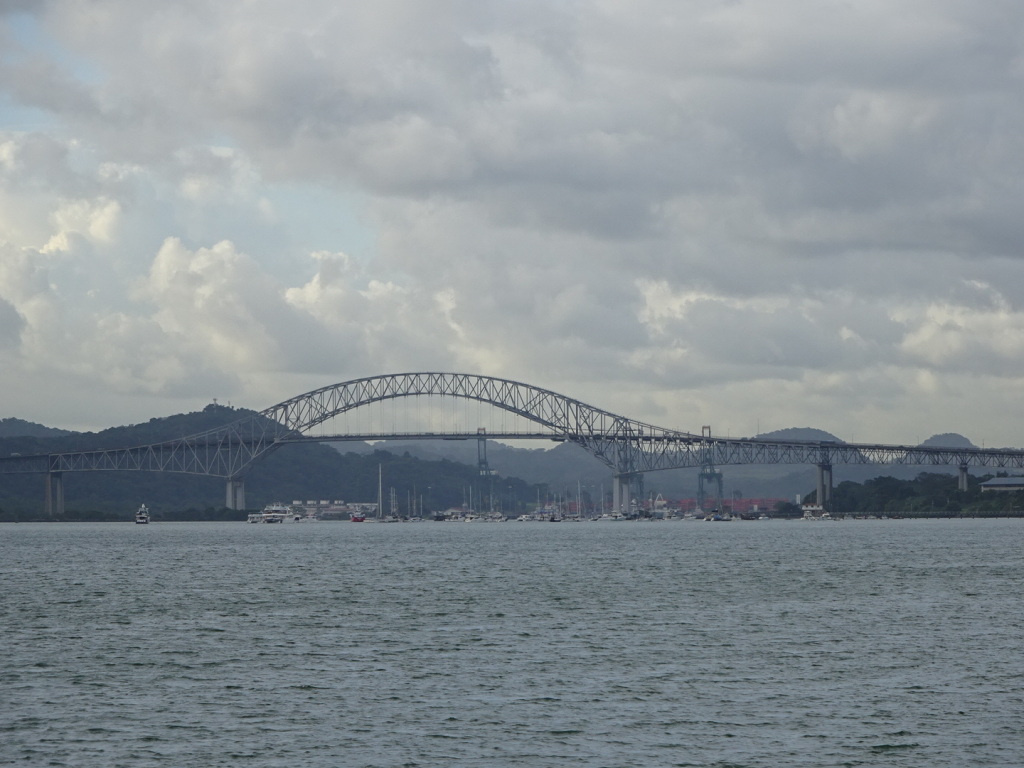 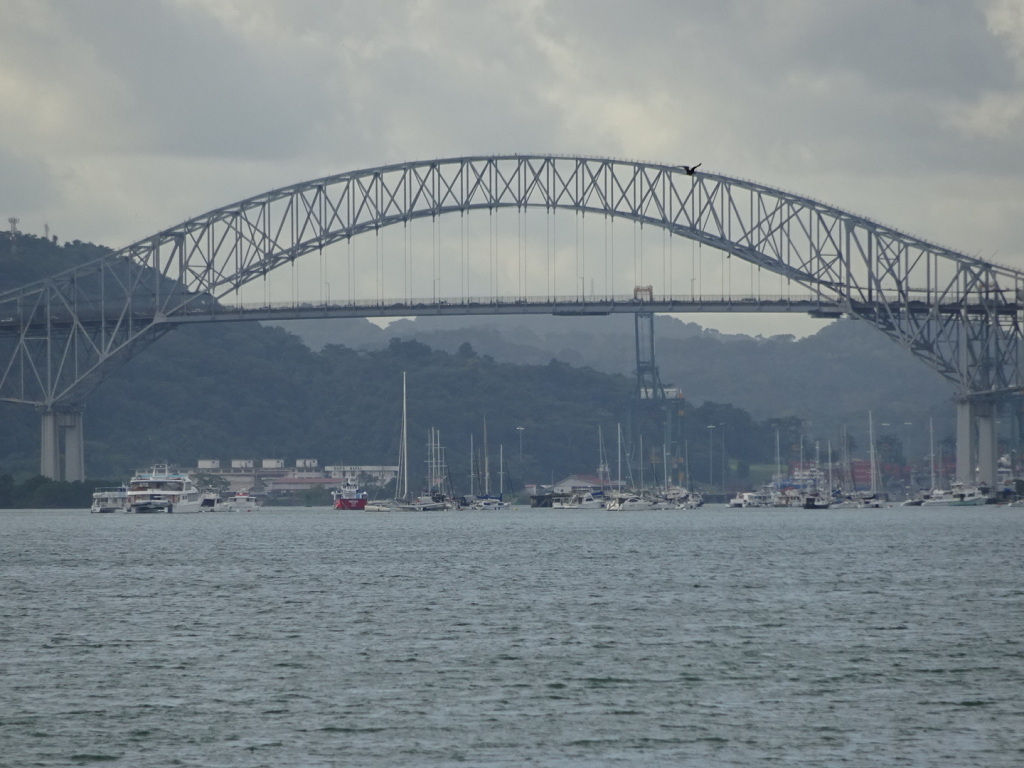 We came across these folk dancers doing a photoshoot – they are part of a Folklorico dinner show. In fact, we ran into them several times in one day in different costumes.

The mens’ costumes were so much more understated than the women’s. Interesting upturn to their hats, though!

LADIES FROM THE MARKET

These ladies were from a local market (if you’re curious, they were selling handicrafts at the Casco Antiguo, right near the Pelican Tree). No telling if this is their everyday clothes or dress up to sell stuff to the tourist outfits. Either way, we thought it was very cool! 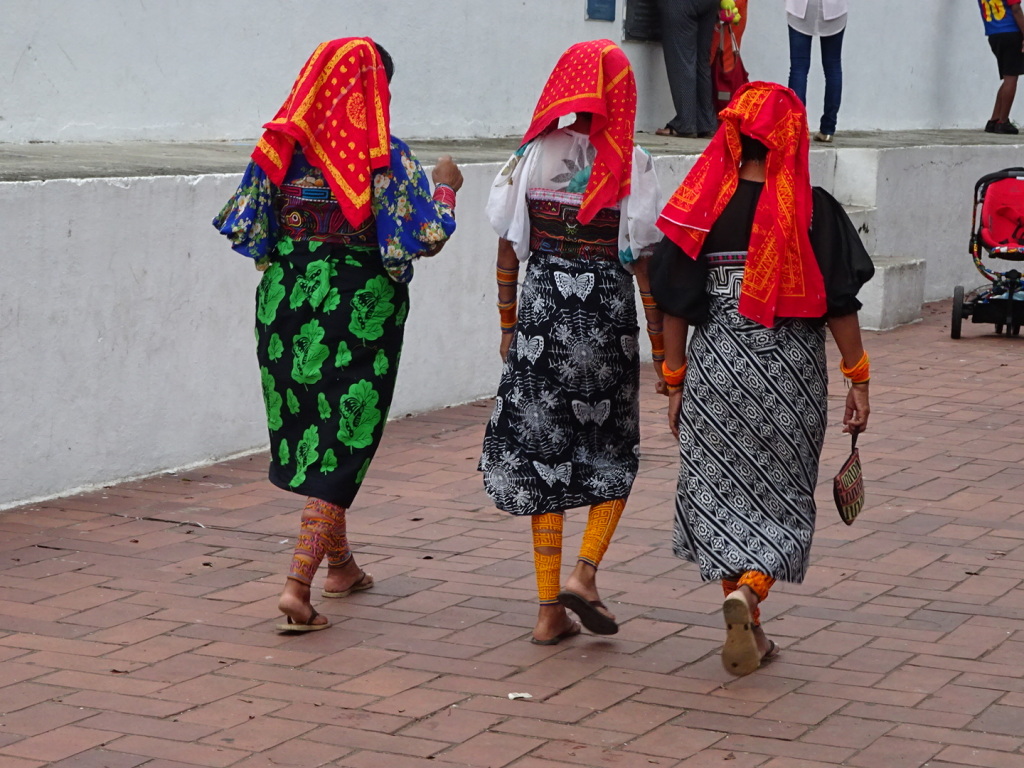 Women from the little market.

Here are a couple of really random pictures that I liked. The last one is my most favorite. 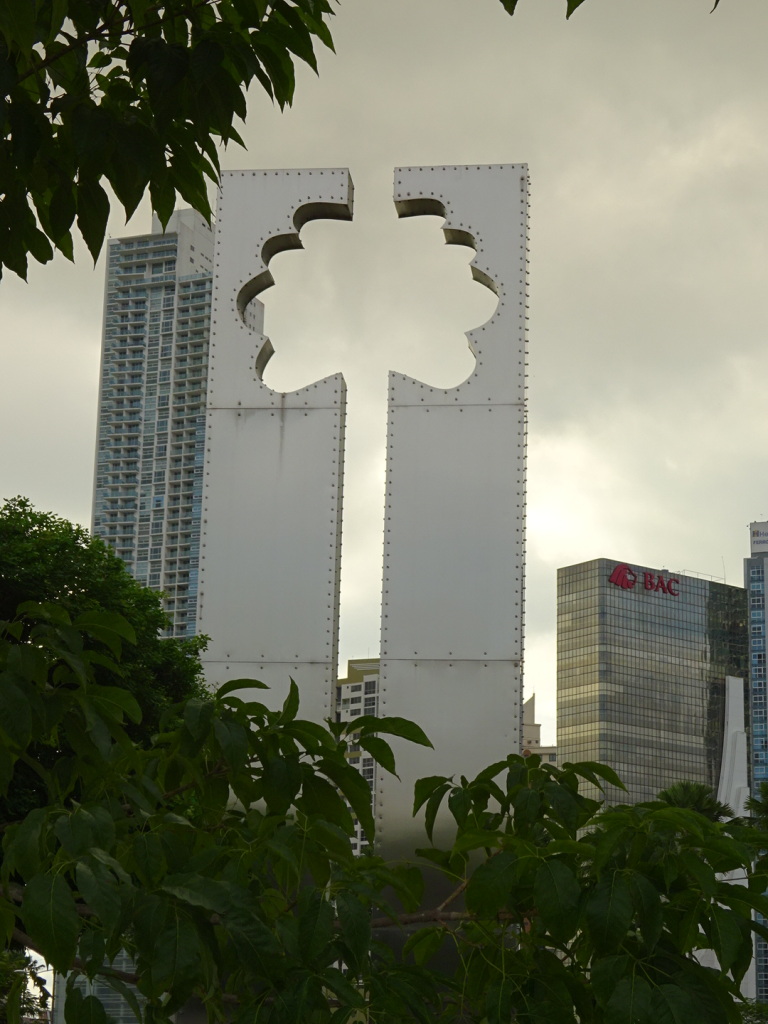 Cool art on the walk way that we enjoyed so much. 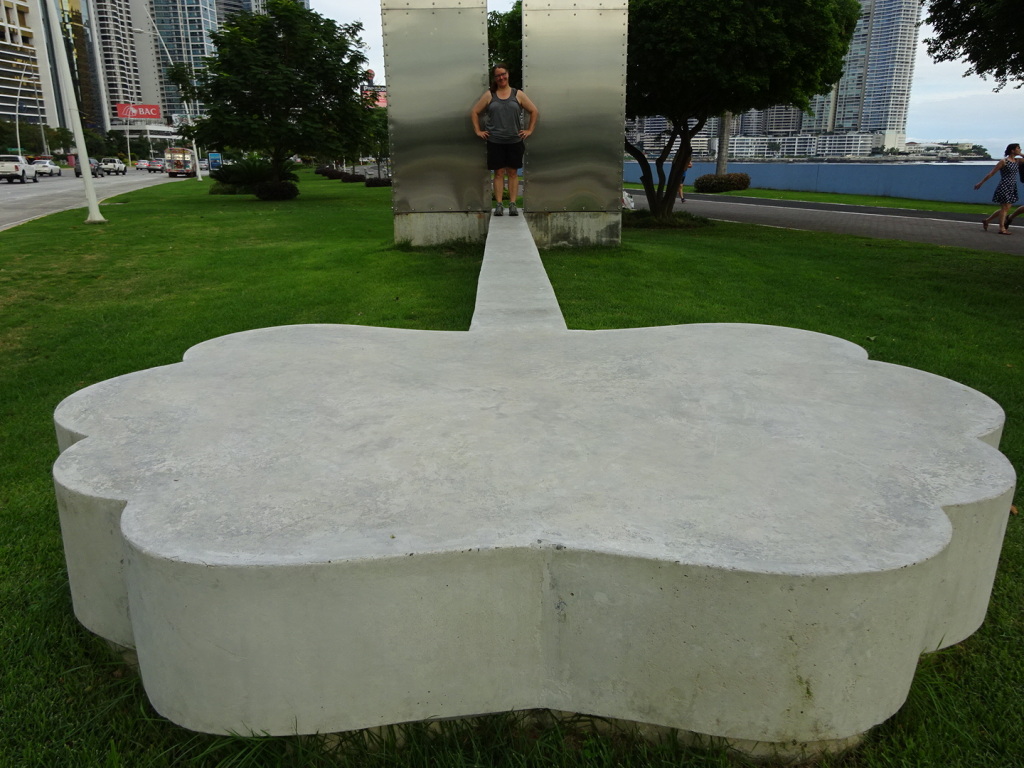 The rest of this art piece – plus it lights up at night. 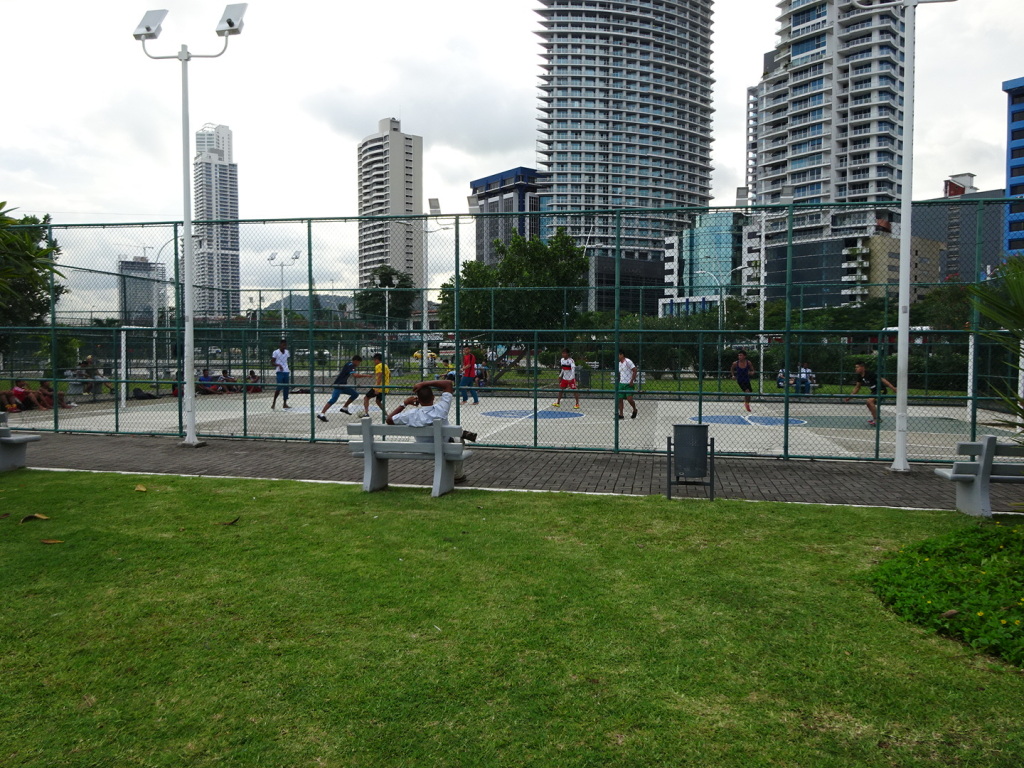 There are futbol courts all over where you would expect to see tennis. There is always a line-up of teams ready to play. There were ALWAYS games underway when we walked by. 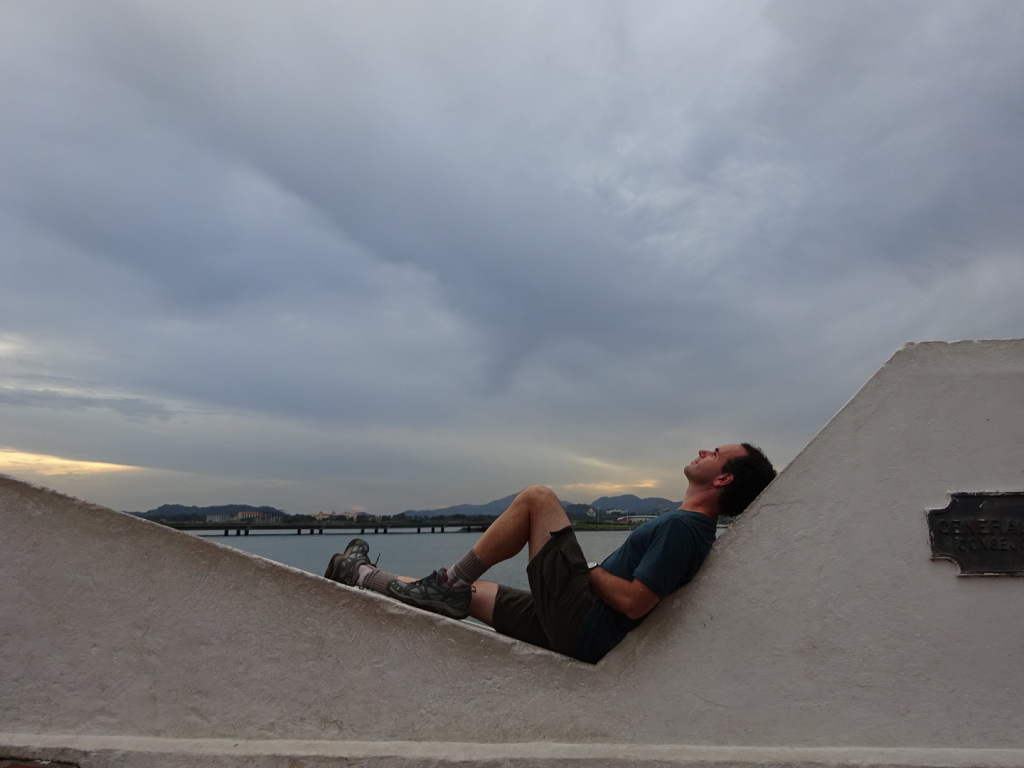 My favorite picture of Aaron, so far.

« The Graffiti and Street Art of Panama City
Guayaquil: A Quick Post »