WoooWhooo! We finally got to see our first truly amazing Engineering Marvel as we spent the afternoon at the Miraflores Locks and Panama Canal Visitor Center!! It is a front row seat to watch vessels as they start or complete their 8-10 hour journey through the Canal. I was pretty excited and staked out my place on the rail so I could have an unobstructed view of the ships and locks. Aaron found something to read and sat in the shade. I quite enjoyed watching the locks fill and empty 8-stories worth of water in only two minutes! About 40 vessels a day make the trip. At it’s peak during construction, 45,000 people worked on it at one time. 45,000! And lets not talk about the tens of thousands that died from malaria and yellow fever in the process! REALLY glad those have been eradicated in the area.

A lot of new technologies were also invented for its construction. The one I remember is that this was the first time concrete was regularly used as a construction material. Who knew? I figured concrete had been used since the cave man built his sidewalks – but not so!

While we were there, we had an awesome chance meeting with a man who has been to 140 countries! Luke and his wife had taken TWO years off to travel the world on their honeymoon when they were young and traveled ever since. She passed away 10 years ago, but he keeps traveling: two months on, two months off – the deal he struck with his kids, who would prefer if he stayed home more…but no way! He hopes to do a house and camper-van swap in Seattle some day. He’d like to find someone in the PNW who would go to Belgium and use his house and camper-van for a couple of months while he uses their house and takes their camper-van up into western Canada. So if you’re interested let us know and we will attempt to make the connection. Hope we’re doing that kind of stuff when we reach our 70’s! 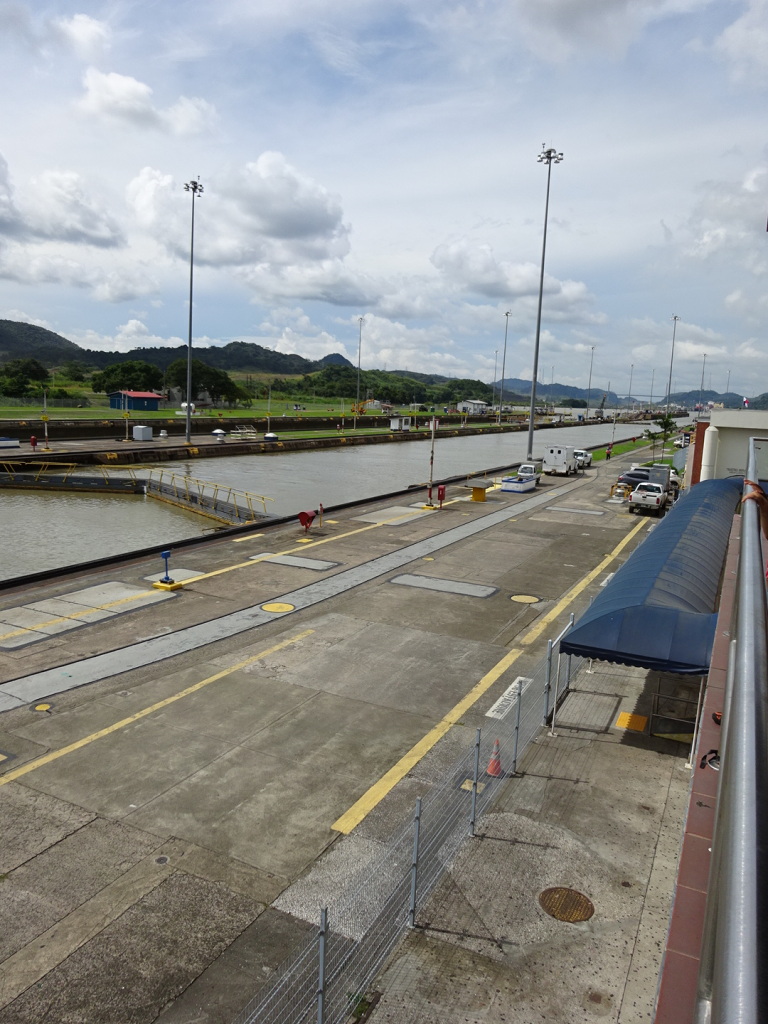 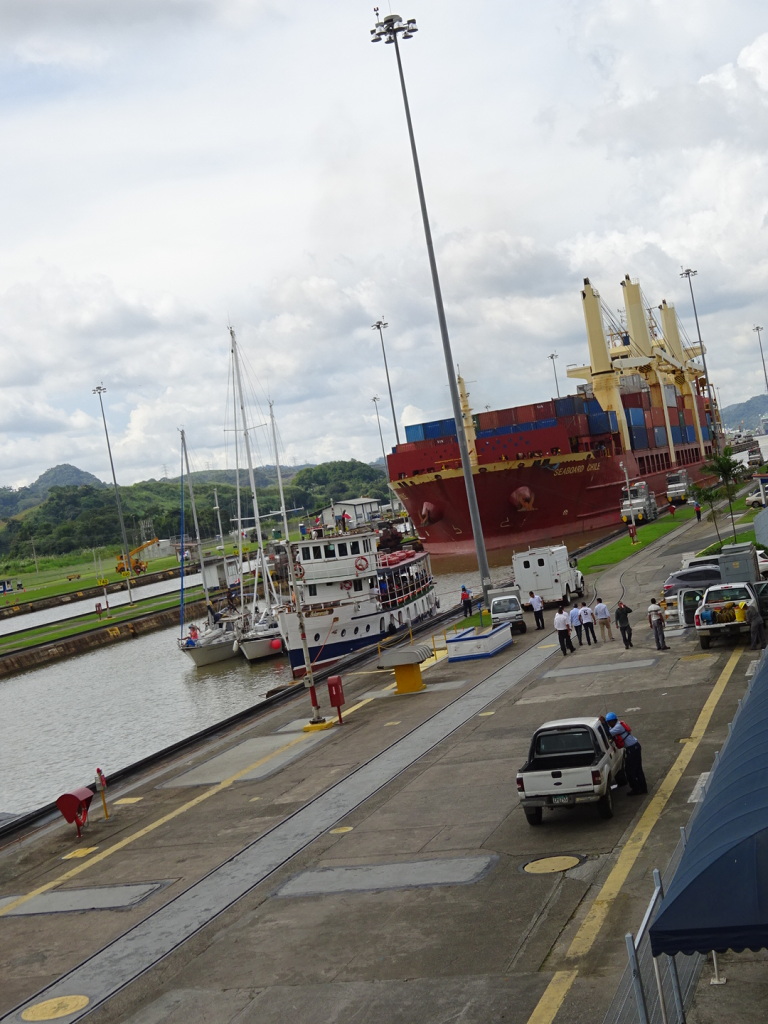 Little boats and a big ship all fit into one lock. 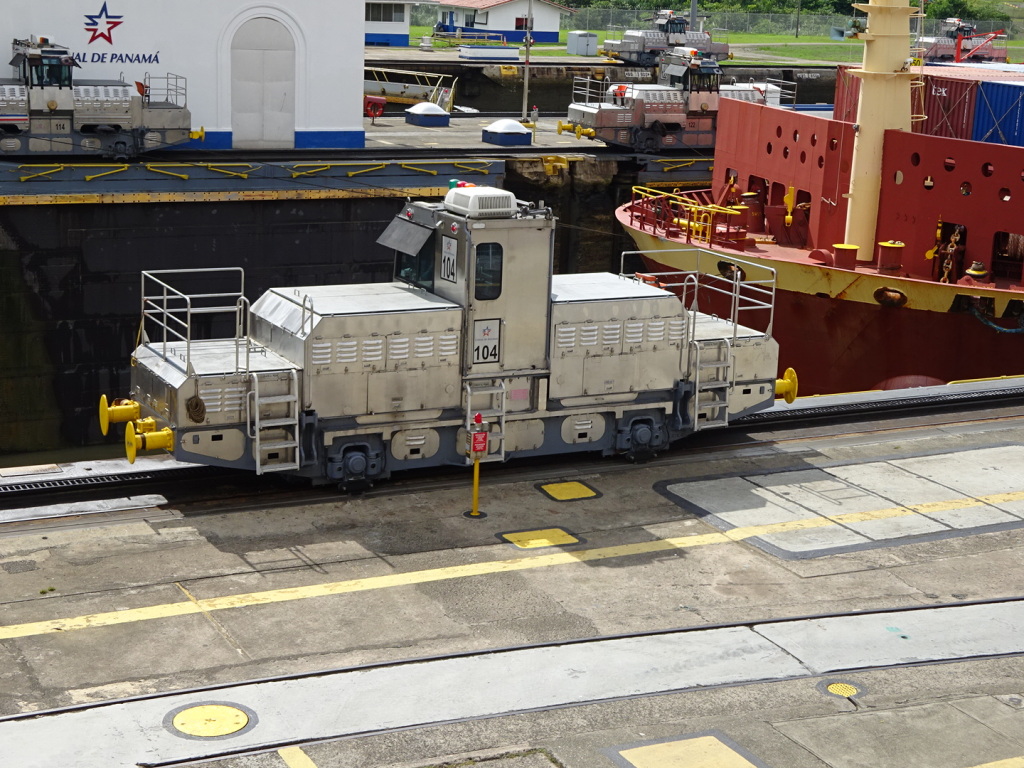 These modified train engines run on tracks next to the locks and help tow/brake the big ships. 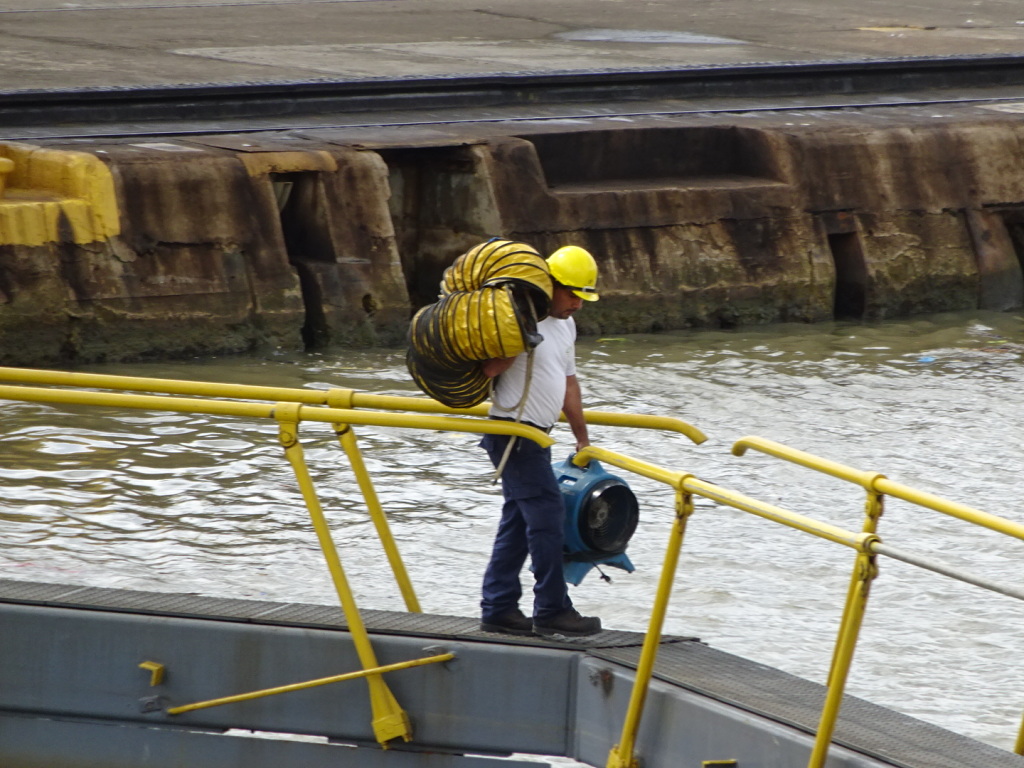 Worker crossing one of the gates that keeps the water in the lock. When the gate is engaged handrails pop up and workers walk across the lock.

You can see the little engines in-action pulling the ship. 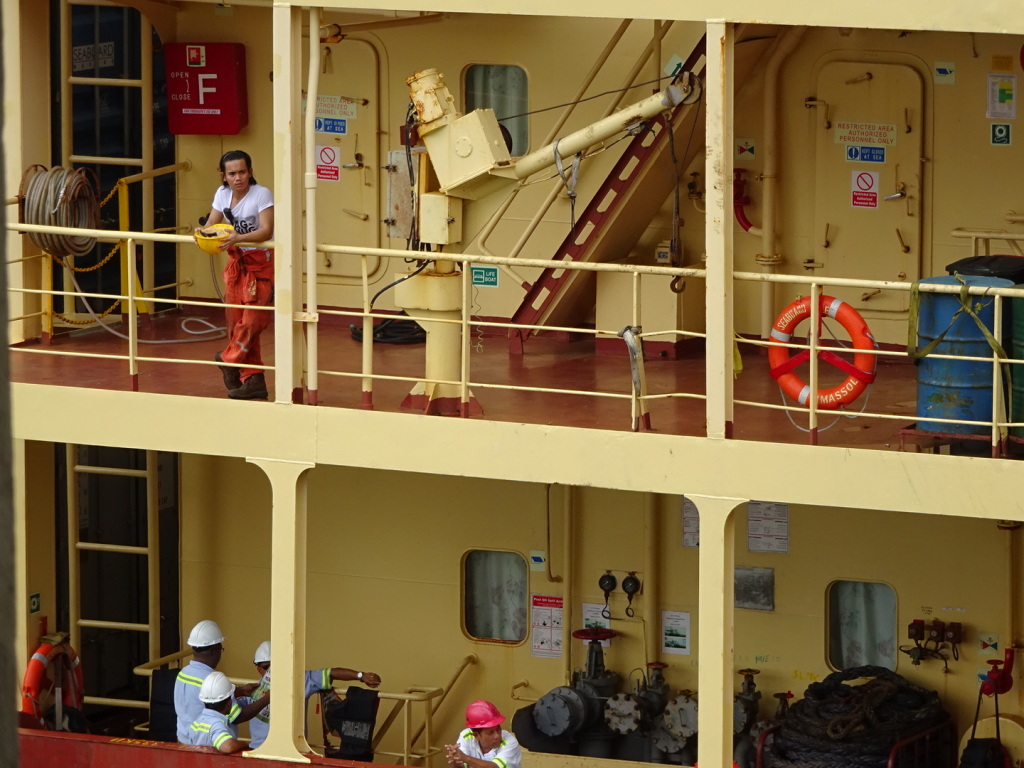 They watch us watching them. These are crew members of a ship that is moving through the locks. 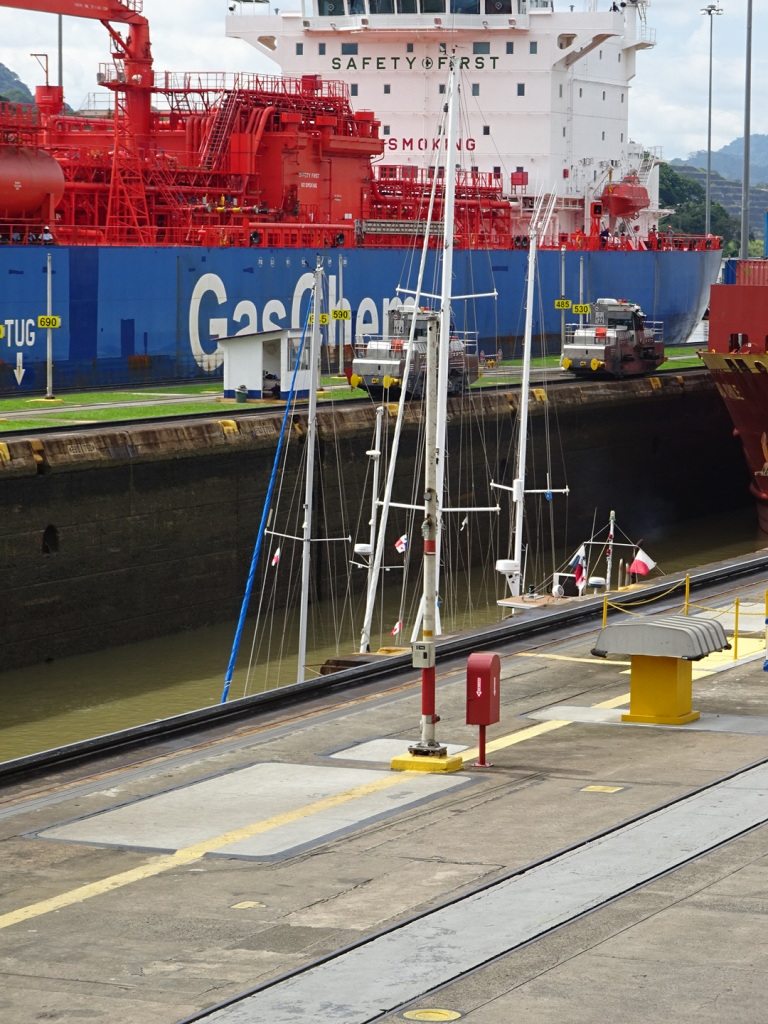 The lock closest in the picture has drained out its water and all you can see is the top of the little sail boats. A big ship has rolled into the lock just beyond it. 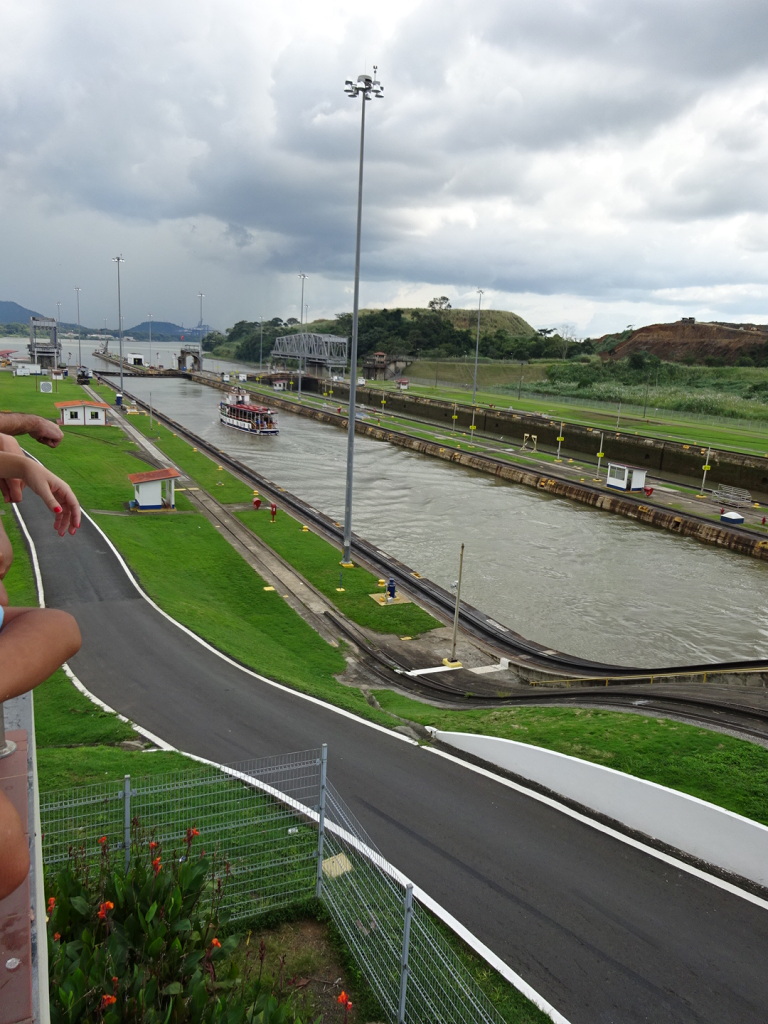 And out you go! The first little boat chugs out of one lock and into a second set of locks that exit towards the Pacific. 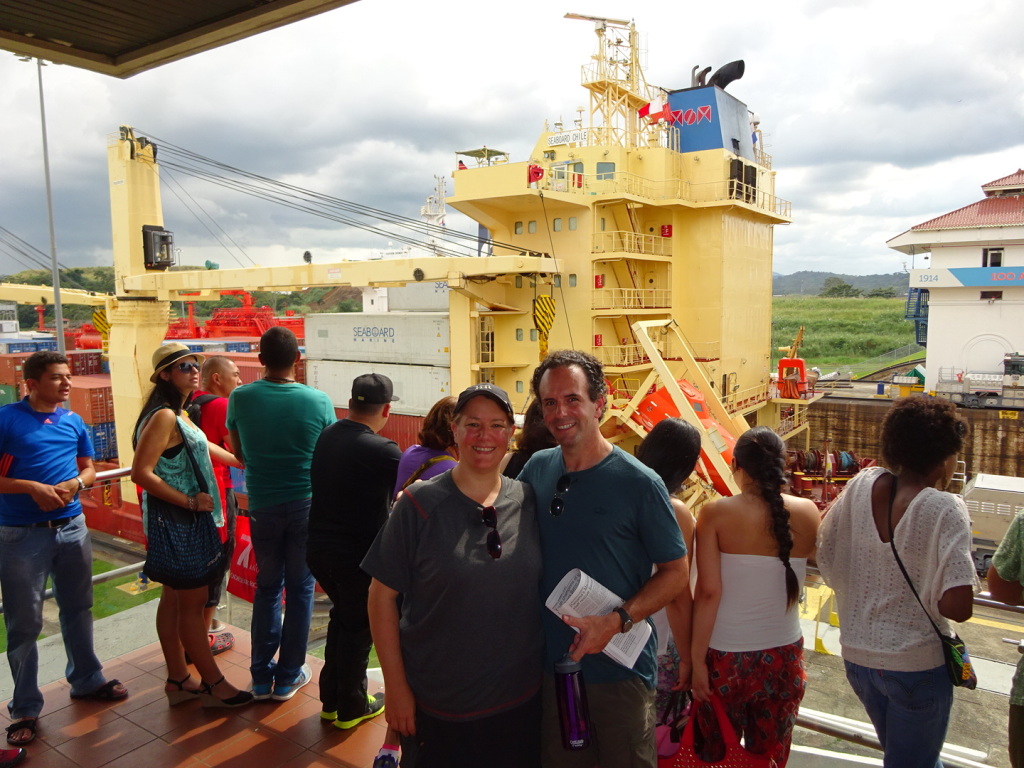 Proof we were at The Canal!!