A Day in the Life of Two Mongolian Backcountry Badasses

We did it! We did it! We survived our two weeks in the Mongolian Altai mountains on horseback! Crazy. Did I mention…WE DID IT!!!??

See them mountains behind us? Yep, we done rode ’em and lived to tell the tale!

Hold on to your horses (Hahahahah – I crack myself up!), this is going to be a looong tale to tell. After a two week, epic Mongolian horse trek, long is our only option. Of course you can always just look at the pictures…but, boy will you be missing out!

It didn’t always seem like we would survive, but the human will to endure is strong! What do I mean? Allow me to set the scene… I stumble up the mountain and fall down next to Bec, a red-headed 20-something from Australia. I’m completely out of breath from our two hour slog up the mountain – walking our horses behind us while we climbed – when the wrangler mecifully takes the lead for my horse. It was Day Seven of riding, but on this day we would mostly walk our horses up one side of a mountain and down the other with only a really short ride in the middle. I was mad! I did NOT sign-up for mountain climbing. Aaron estimated that in our eight hour day we walked two-thirds of it. And let me say, this is a mountain I would NEVER agree to hike up and down under anything but duress! Bec turns to me after I catch my breath and in her Aussie accent, “If you knew then what you know now, would you still sign up?” I shake my head vigorously, “Absolutely Not!” Aaron waffles and shrugs his shoulders, maybe he would, but he’s not sure. Then we look out and realize we’re pretty much on top of the world with mountain after mountain fading into the horizon and steppe eagles circling just above us. Not another human to be seen. Period. Maybe I might be willing to try this again…

okay…the views were not bad (note: you might want to double click on the panarama pics so you can really see them.)

Our two week horse trek would indeed be an incredible experience. I write you quite proud of living through it and just try to tell me we don’t now have some serious badass backcountry street cred – just try! 🙂

Let’s see if I can give a feel for what the whole journey was like. 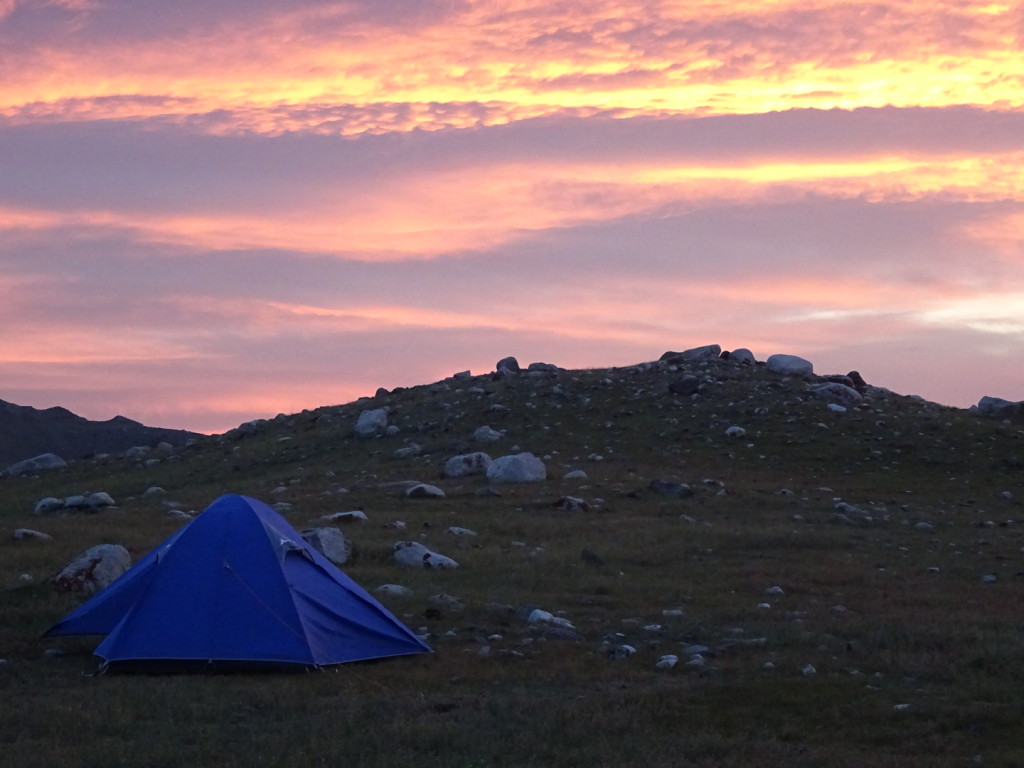 Welcome to sunrise in Mongolia!

Typical Day We wake up around 7:00-something. Take down our tents. Pack our sleeping bags and mats. Pack our gear. Pack our saddle bags with anything we think we’ll need for the day…hats, sunglasses, snacks, water, warm jackets, raincoats, cameras…double check that we have ibuprofen…and maybe some asprin too. Walk up to the hole-in-the-ground (the “long drop”) and take care of our morning “business”. Unlike our African safari, this was a full squatting hole in the ground – not even a make-shift seat to use. Then off to the river to wash faces and re-fill water bottles. That mountain stream stuff is COLD! We’re awake now! Go have breakfast. 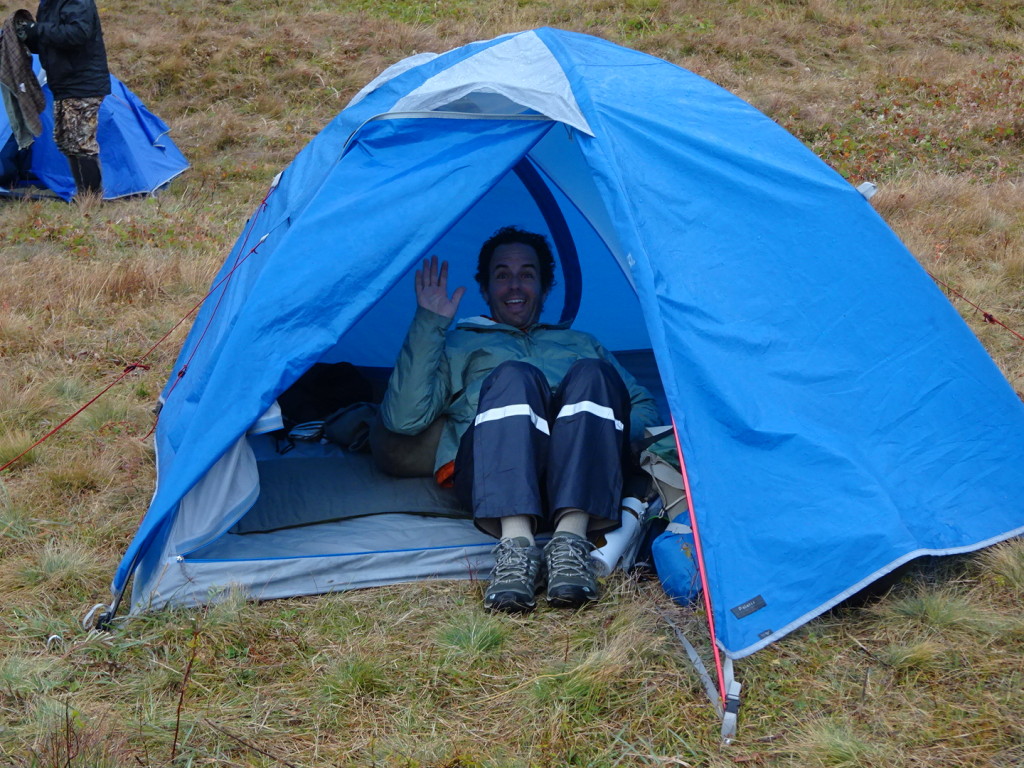 Waiting for our ride to start. Yes, Aaron is wearing pants with rainpants over them, a wool t-shirt, long-sleeve shirt, down coat and raincoat on top! All the rage, I tell ya.

All the meals were prepared by Khazak Mongolian women (we were near the border with Khazakstan and most of our staff was of Khazak descent). We started the day with yak’s milk oatmeal. Aaron doesn’t like oatmeal at all, but by Day Three he learned the secret to choking down oatmeal is in the sugar. He’d put in a quarter cup and eat as much as he could stand before handing me his sickeningly sweet leftovers, which I would dump into my slightly less sweet porridge and together we licked the platter clean. While we dine on the floor of a ger (one of those funny Mongolian tent homes), the Khazak men round up the horses and saddle them. Then the lead wrangler, a short, round little man with rosy cheeks and a stocking cap named Khatran (the man, not the stocking cap), would yell “Kittek” which meant, “Let’s go!” Time for the embarrassing task of hoisting myself over my horse – which always took a lot of leverage and help from the wrangler. Once everyone was mounted, the day’s ride could begin! 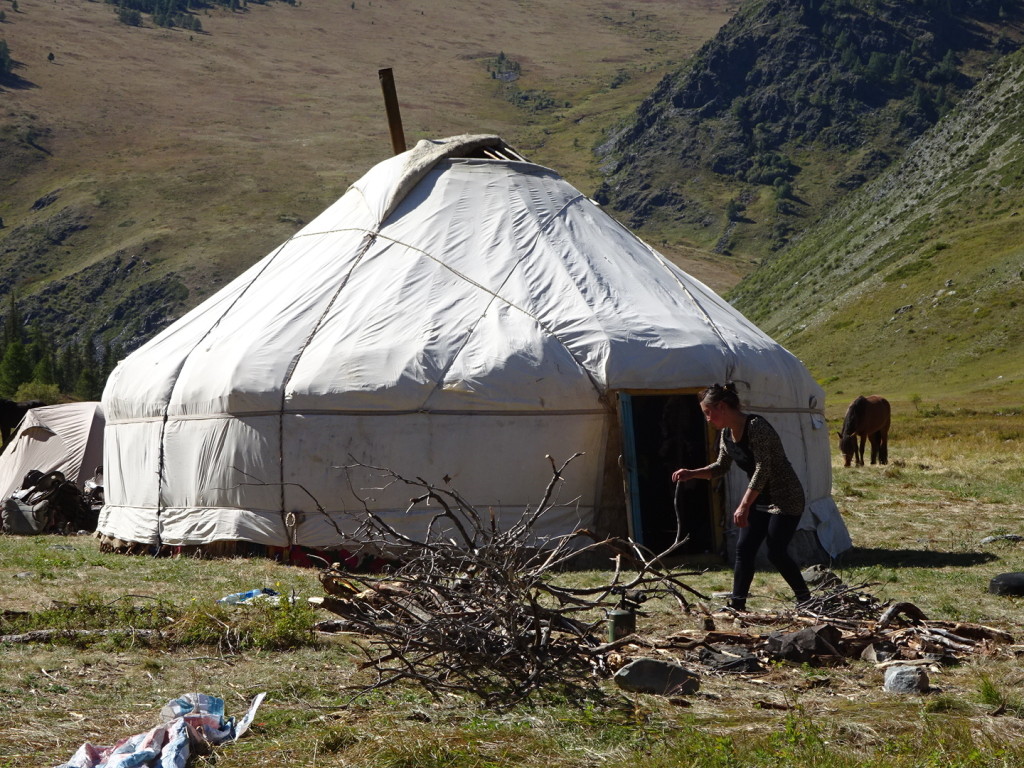 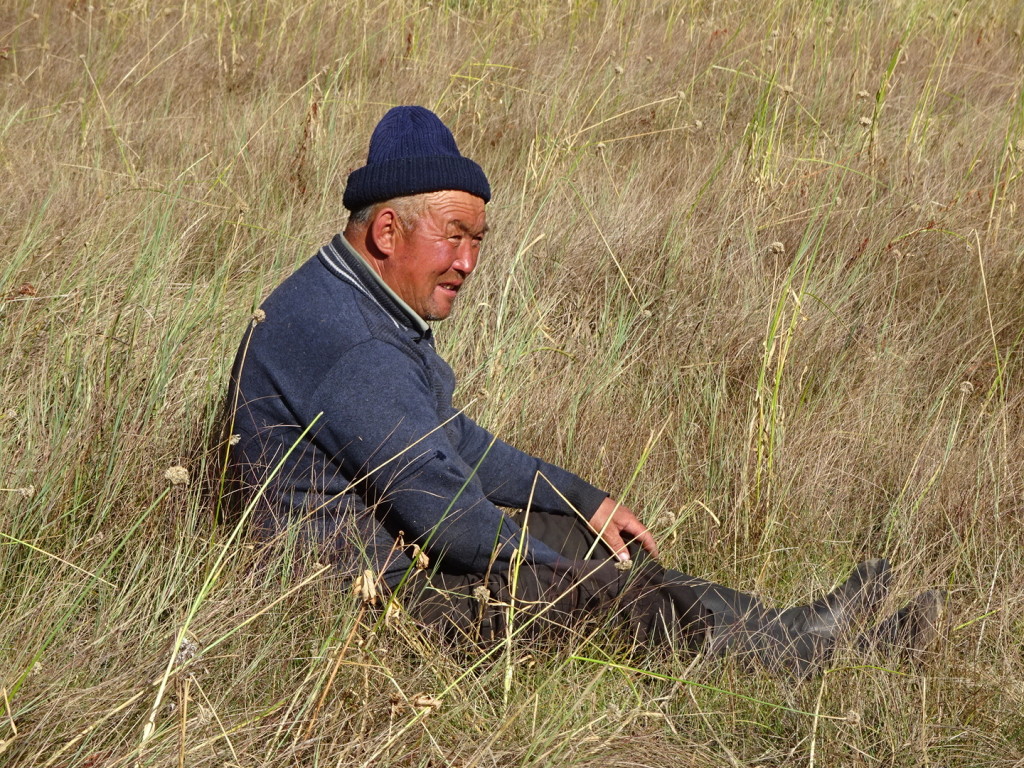 Khatran during a break. After a few minutes he scoops himself up and yells “kittek”. 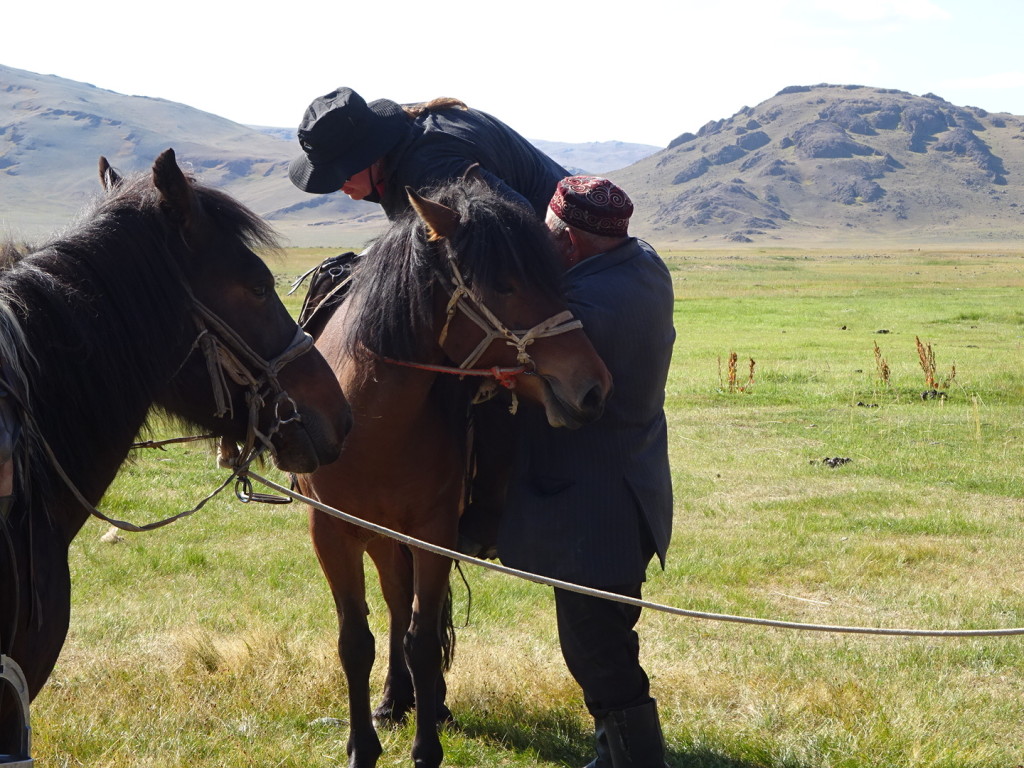 Heeeave Ho! Khatran quickly delegated this job to one of the other wranglers.

Quick riding aside: The rides might be easy or hard for everyone else, but for Aaron and I, they were all hard! Probably had something to do with us knowing next to nothing about riding. Those practice rides in Ecuador? Umm, only marginally helpful. Anyway, by the end of the first week we were doing MUCH better. Things we could barely do on the first day were becoming more comfortable and natural. On our last few days we were finally feeling a bit more in tune with our horses and navigating small water crossings without a wrangler pulling my horse across or someone yelling “Kick him… No! Kick harder!” to get us to do whatever it took to get the horse across.

Now, back to the day! At some point the wranglers would stop us for a break. We’d eat Mongolian cookies, chocolate, and salty peanuts. Another embarrassing mount. Back to riding. 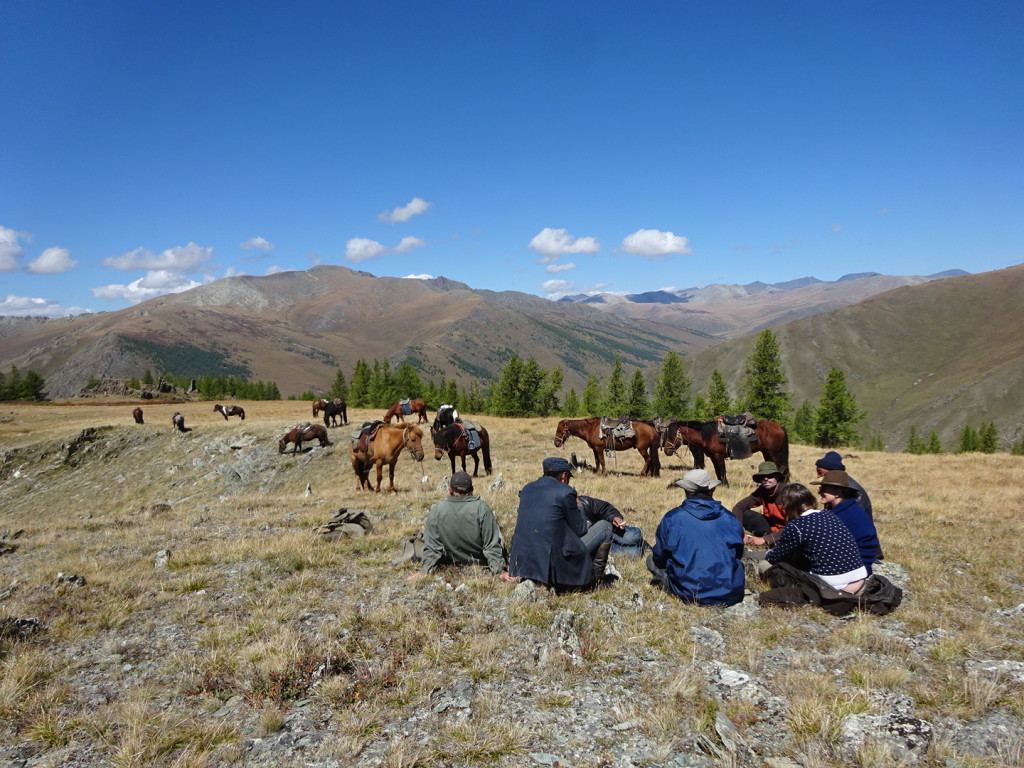 Snack time! Aaron loved that there were always chocolate bars available for snacks.

Later we stop for what they called lunch. Lunch was universally terrible. For those who liked such things, there would be canned sardines and canned oysters. For the rest of us, there was dried out, stale, sometimes moldy bread and pickles. Khazaks love their pickles! The men would drink the pickle juice straight out of the jar. I’m not even making that part up. As you might guess, not a whole lot for either Aaron or I to enjoy. The breaks and lunches were always in the most gorgeous places, though, so we pretty quickly learned to bring some dried fruit and granola bars of our own (thank goodness we’d read that recommendation from other travellers) and just sit back and enjoy the view, ignoring the very forgetable food.

After lunch, another mount, more riding. Depending on the day, we might think we were going to die from walking up and down mountains, or die crossing streams and rivers, or die riding through a forest full of stumps, rocks and tree branches or die as our horses decided this was the day for them to start cantering without us wanting it. Hard to say, but usually there was something heart pounding that would happen. 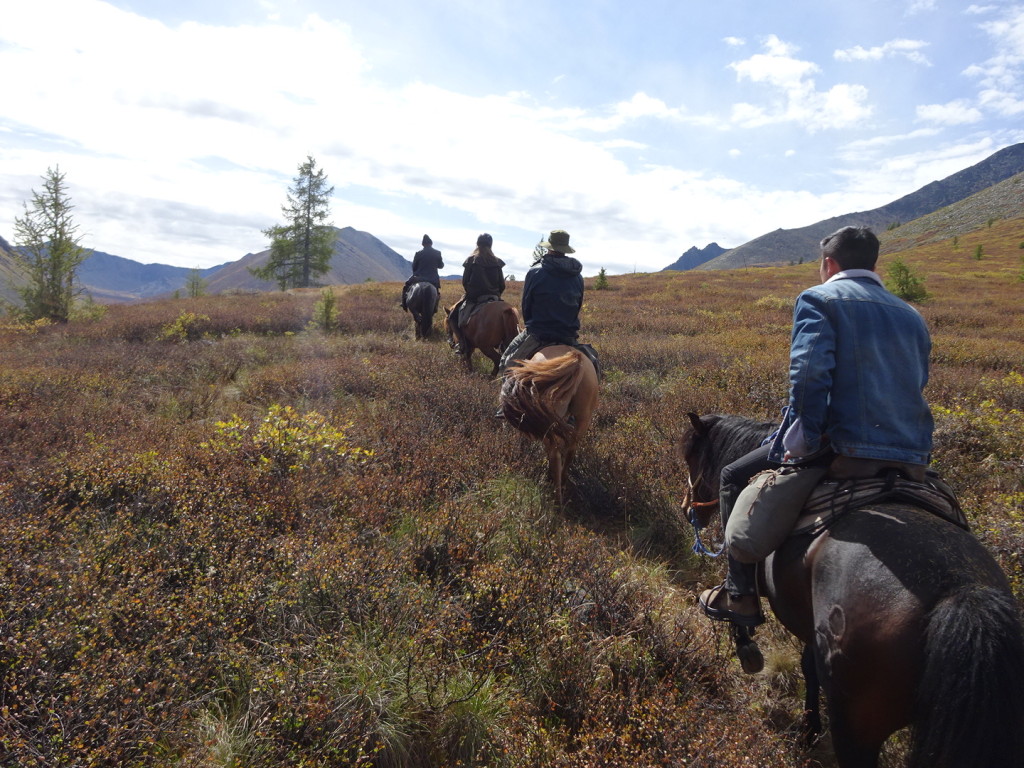 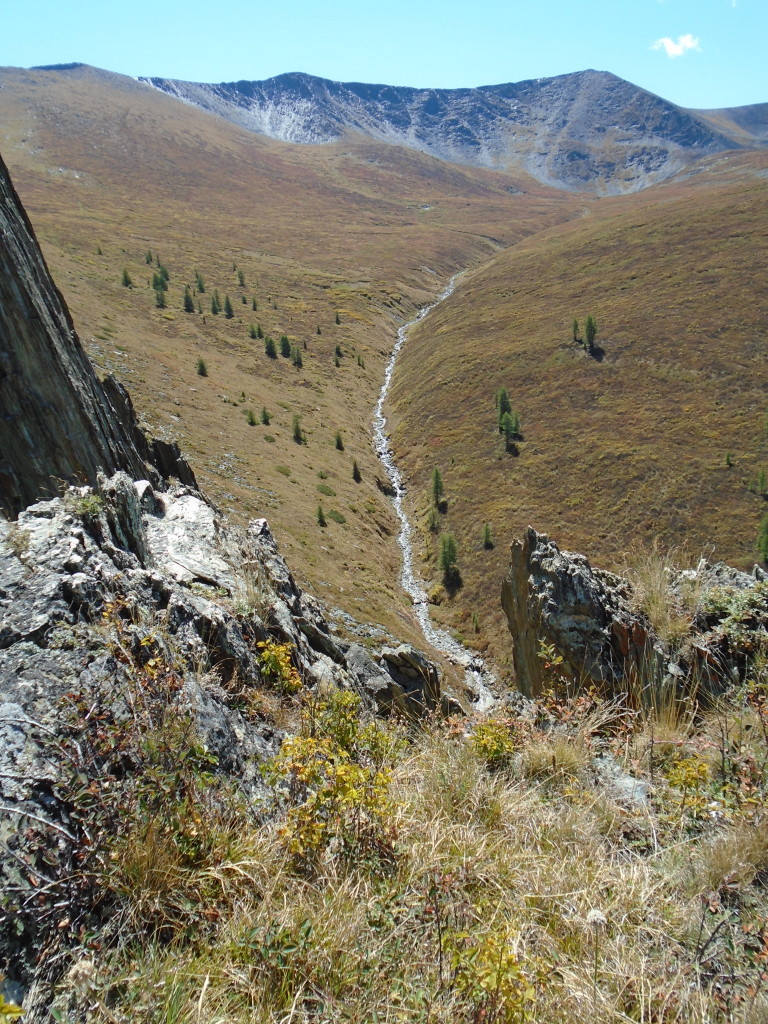 Not so easy riding terrain. Yes, we did ride down there!

Finally we’d make it to camp totally alive and in one piece. There the Khazak ladies would be waiting with dinner nearly complete. We would pitch our tents. Blow up our sleeping mat. Unroll the sleeping bags and make our tent a home for another night. Dinner bell would ring and it was usually pretty darn good! Every night was some version of mutton, cabbage, taters, and carrots. Sometimes in pasta. Sometimes in fried dough. Sometimes in dumplings. Sometimes in soup. After Aaron and several others got sick on mutton, one-by-one, more and more people began to ask for vegetarian meals. Did everyone get that? Mongolia turned Aaron into a vegetarian!! Welcome to the veggie side my love. 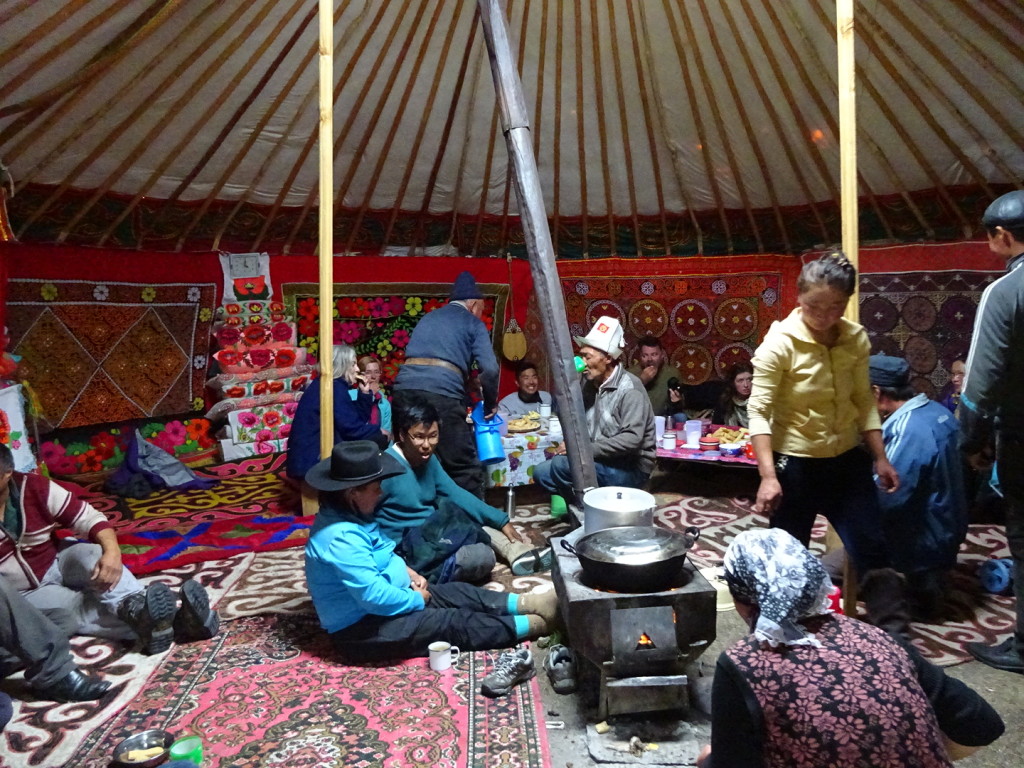 Dinner in one of the gers.

The night ends with chatting around the stove or camp fire. One night we attempted to make a “tiny fire” – an itty-bitty elf-sized fire with tiny little sticks. It took five man hours to complete, but we were pretty proud. The Khazak wranglers joined us, gathering tiny sticks. They had to be shaking their heads though and talking amongst themselves, “Why don’t they just use the big fire we made…should we give them the torch and the lighter fluid..naaah, let’s watch the funny white people.” Aaron narrated the entire event and, as always, he cracks me up. In fact, he even got given an award at the end of the ride for something like “Most Surprising Sense of Humor”. I know I’m always surprised! 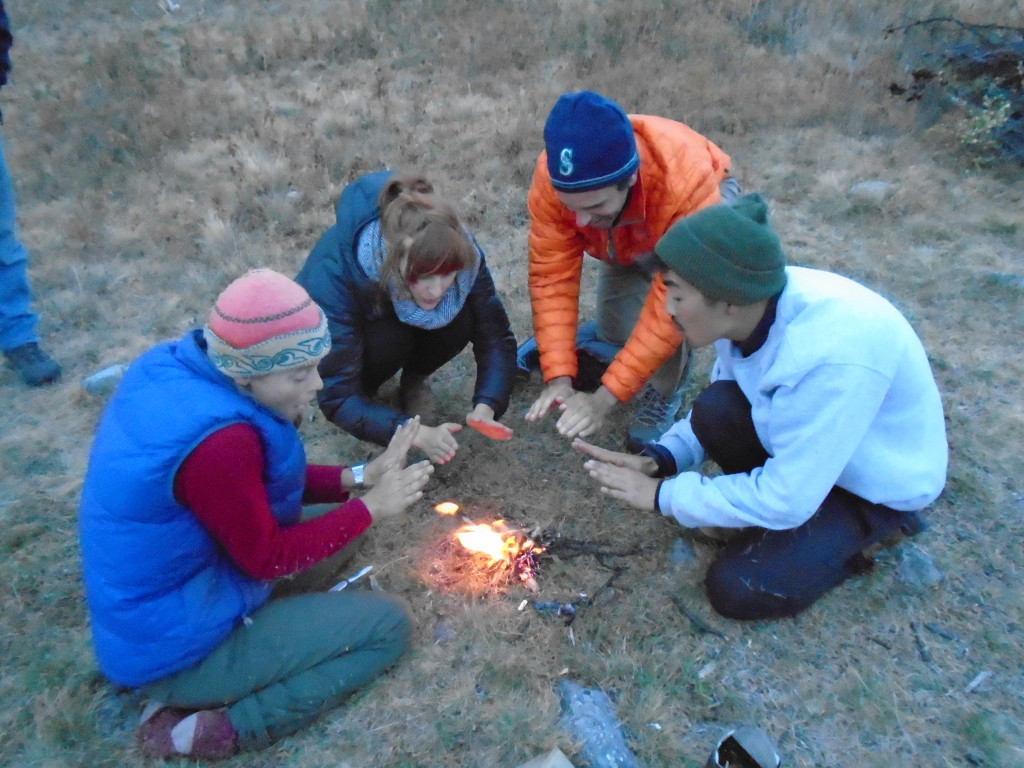 Oh how proud we were of an itty-bitty fire!

Another night we played a game with sheep bones. Aaron came in first. Of course. Add it to the gaming spreading sheet. One delightful night the Khazaks made fresh fried dough (like donuts) for us while we played cards. Ohhhhh, mamma…fresh fried dough (think: Minnesota State Fair). Yes, please. Finally we retire to our tent to read (thank you SO much, backlit Kindle Paperwhites!) and fall asleep. 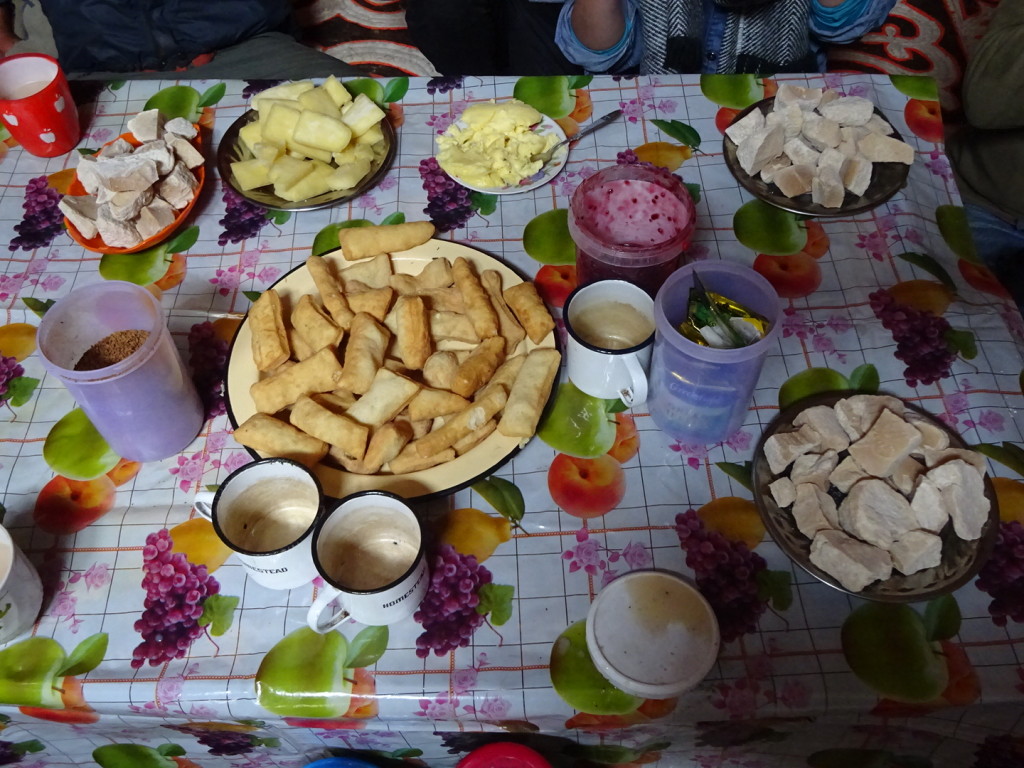 Fried dough in the middle, dried yogurt in the corners and yak milk cheese 2nd from the top left – breakfast of kings! Well, plus porridge.

And there you have the basics of our average day…if there was such a thing as an average day! I know there’s so much I haven’t told you yet, but Aaron says maybe we should break this blog down into more manageable pieces and he’s my editor, so one entry becomes two. Or three. Four? We’ll see how it goes. Next time I’ll introduce you to the horses! 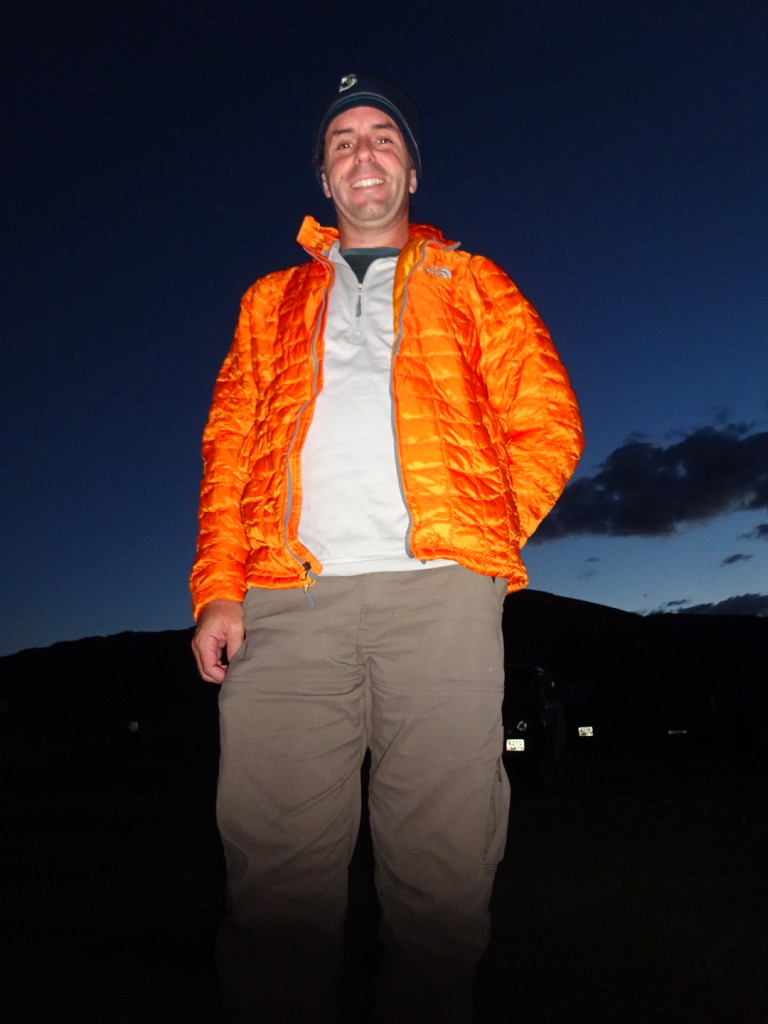 Aaron sports his nice warm puffy coat (thanks for bringing it, Lisa!) on a gorgeous, cold, Mongolian night.

« Barfing in Bali
Life with our Badass Mongolian Horses »