Carnaval, Day 3: The BIG Parade – Cajamarca, Peru (lots of images, so please give it time to load!)

Grab the closest red felt tipped pen and just go ahead and cross off “Attend Carnaval” from the bucket list. I didn’t even know it was on my list, but having attended the really big parade, I now know it’s not to be missed! No doubt today there is a national shortage of glitter, sequins, and glue. This was The Big Thing for Carnaval, to be followed days later by a ‘wake’ and subsequent funeral (which we will not attend, but we are assured people cry at the end as there’ll be no more Carnaval for another year), and big it was indeed.

There is SO much to say that I don’t even know where to start. Perhaps a compare-and-contrast to a parade in the US and then a bunch of photos? Let’s try that!

A Video is Worth a lot of Words: To get a feel for just how festive the Gran Curso of Carnaval is, we combined snippits of a bunch of videos we took. It’s not fancy, but you’ll get the idea! Lots of dancing and costumes! 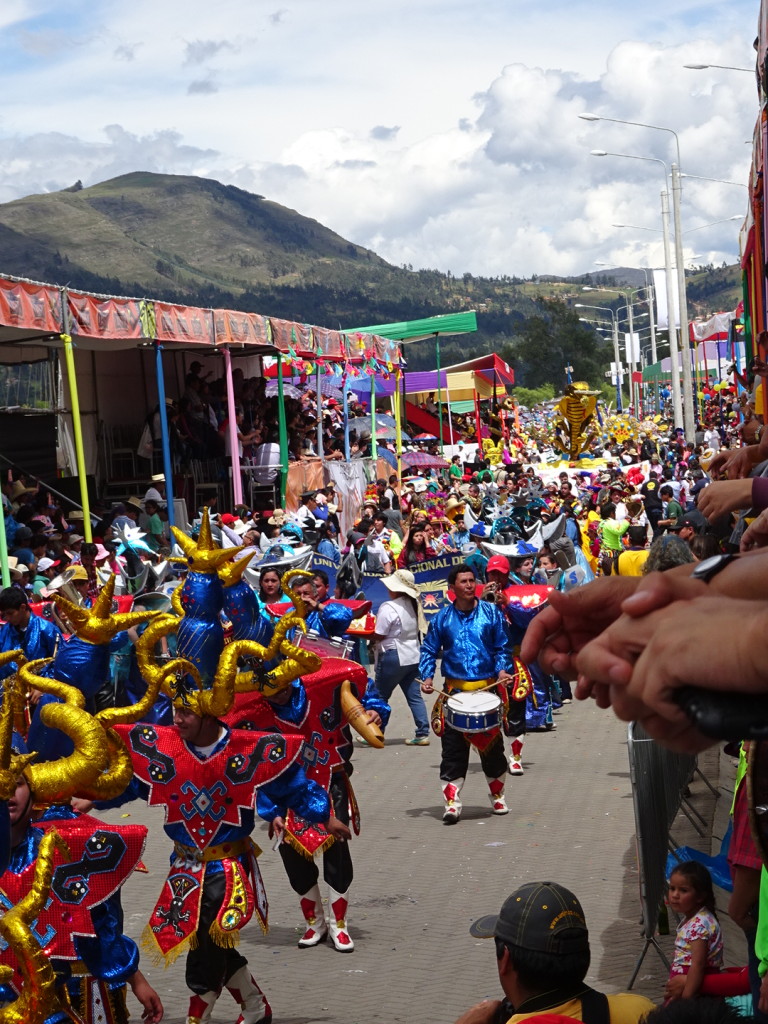 SUCH amazing costumes – and they change every year! No re-using here, just creativity all the time! 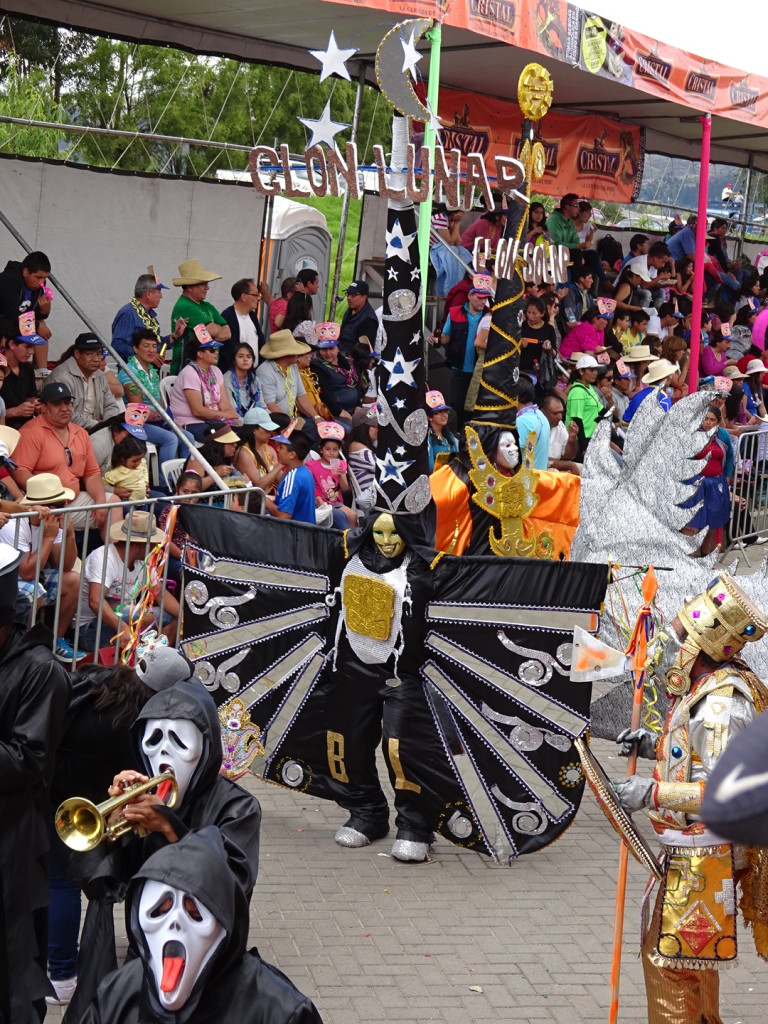 The rays on this “Clon” (clown) are actually long mirrors! With the hat, he’s at least 11′ tall! 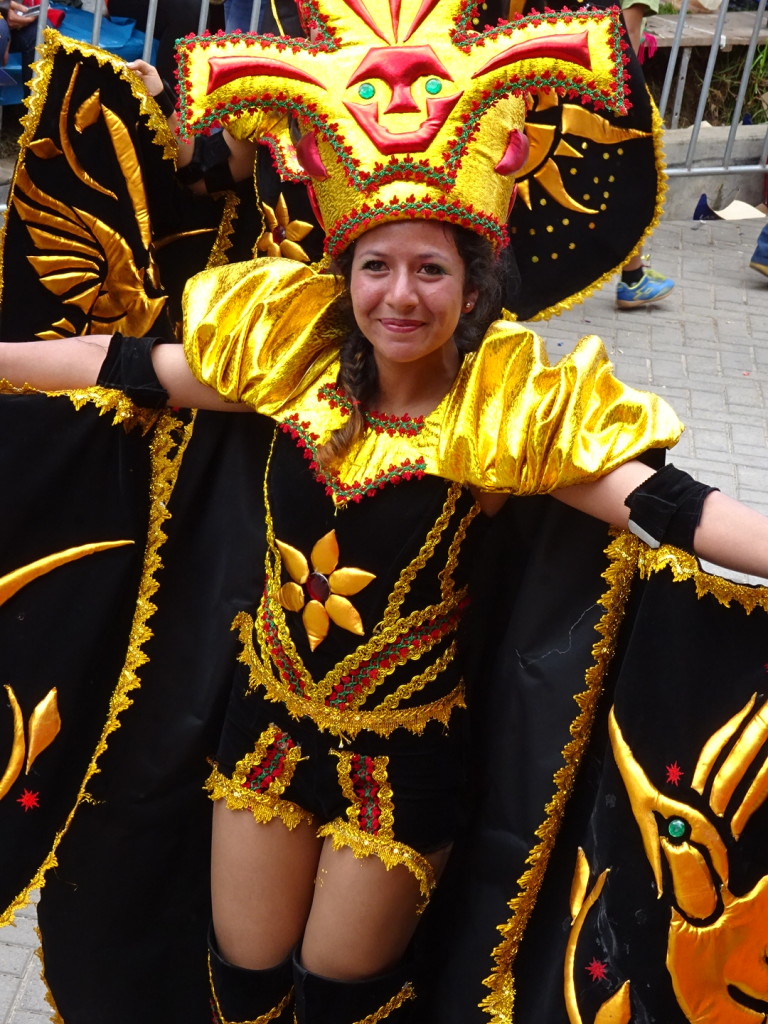 If you can believe it, this is one of the simpler costumes!!!

City Wide Power Outage – Knowing almost everyone will be watching the parade, the city shuts off the electricity all day! Totally unexpected – we just woke up to find out that we couldn’t take hot showers. Noted for next time.

City Wide Water Fight – Throughout the weekend of Carnaval kids douse each other with Super Soakers and water balloons. The tiniest tot will be armed with the biggest water gun she can carry, dad at her side showing her how to target her next victim. We were relieved that gringos were not targets – as they are in Cuenca. In the hours leading up to the parade start it’s nothing but a non-stop water fight! 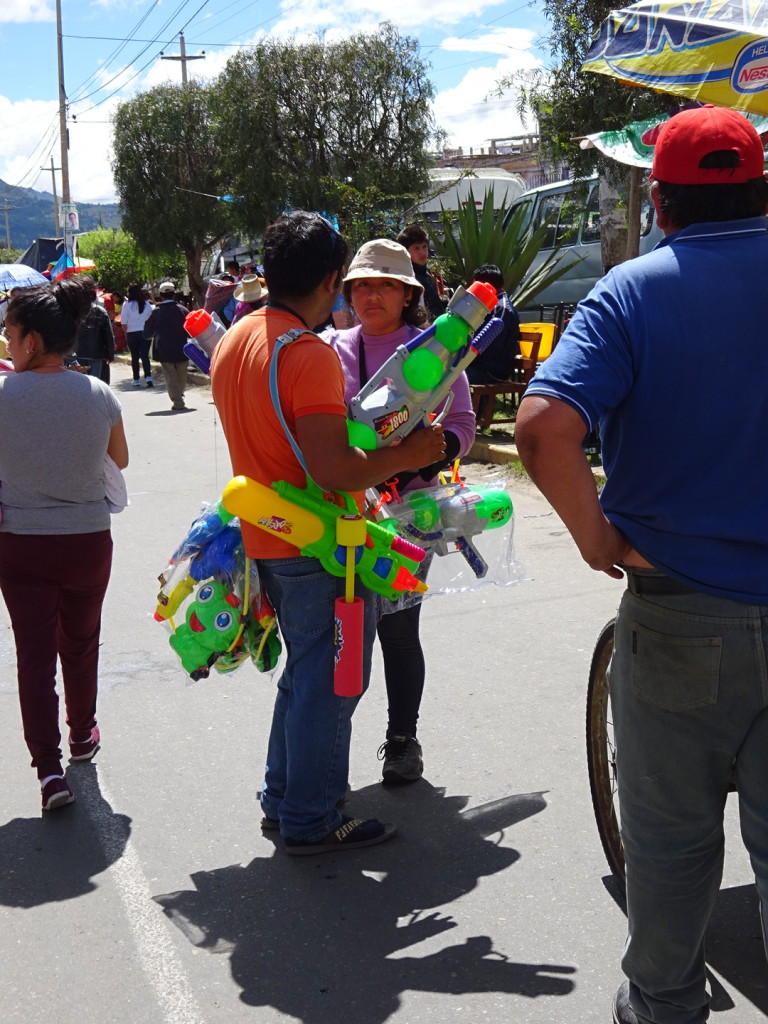 Water gun sales were brisk in the bright (hot) sunshine.

Floats – this parade had floats, but not exactly like most you’ll see in the US. One hospital had a completely outrageous float featuring a giant woman giving birth and a doctor (a real human) pulling a doll baby out! There it was: full paper-mache vaginal nudity (I think we’ll skip the photos of that one…). There was also a giant skunk that sprayed water out its backside. And, of course, the giant donkey who’s penis moved up and down. Yep, the crowd loved all of it! 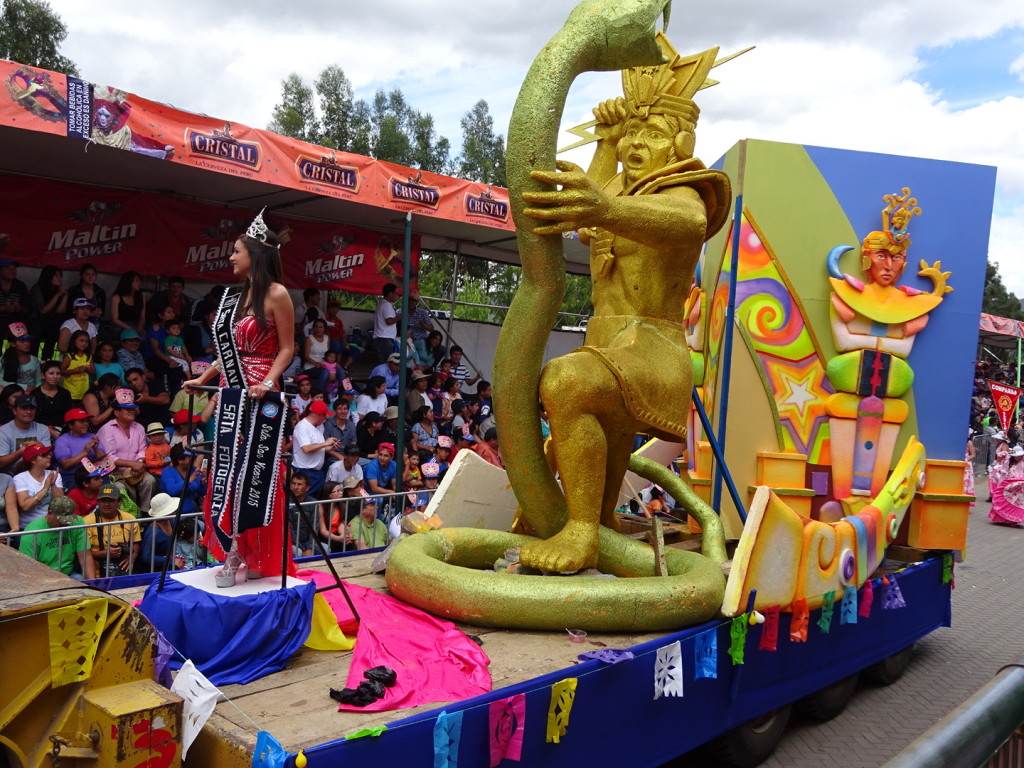 Floats tended to have Incan imagery or local customs, and most all of them had queens waving from them!

Vendors of all types descend on the parade route…need a hat? Trust me, on this sunny day you did!

Battle of the Bands – Ahhh, The Carnaval Song, performed by Every. Single. Band. If a band wasn’t within hearing distance, people in the stands broke out their own instruments and performed. Often both played (not in synch or anything) along with the MC who would stop everything for someone to do a usually horrible karaoke version of The Song. 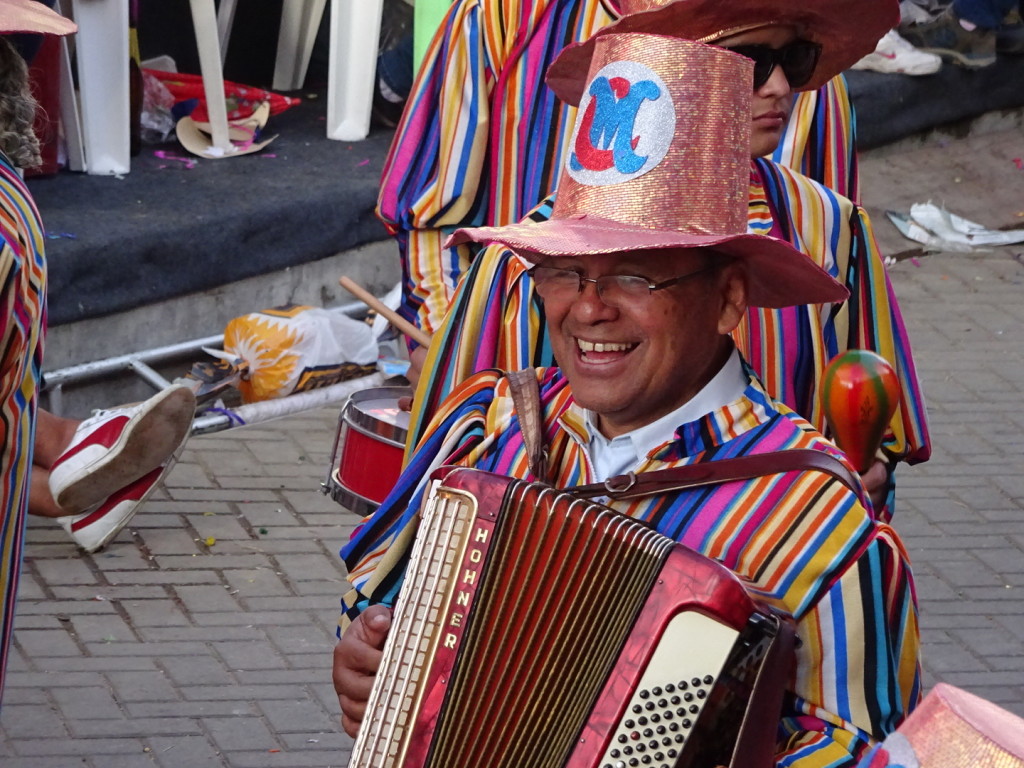 Horses and Roosters – Oh sure, many parades have horses, but that wasn’t good enough for the National Police. In addition to a band, multiple groups doing traditional dances, a queen and people marching in uniform, they had the cock fighters. You heard me right. They marched with their prized roosters and before our very eyes they formed a circle and did a demo. (Happily the roosters’ talons had little covers on them so it was a bloodless event.)

The cock fighters. Really. (and I refuse to put in any bad jokes here)

Alcohol – A little beer happens at most US parades…but here there was not a single group that didn’t have multiple cans or bottles making their way among the performers. The crowd would hand them out, often running among the marchers to give a cup or bottle to their favorite. Only a few folks seemed to over do it so the show continued smoothly. Thank you, thank you, thank you Carnaval for being so family friendly and not the debauchery of Mardi Gras!

Time – Perhaps the biggest contrast is how long the parade went on. We were told by several people and a couple of official looking signs that the parade starts at 10:00-10:30am. Perhaps they meant that 10:30 is a good time to wake up for the parade as the parade started at exactly… 1:00pm! Yes, we waited for about three hours just for it to start. Then the parade itself lasted six and a quarter hours! That’s right, the parade ended at 7:15pm, just after dark. We are proud to say we were there from start to finish. Feels like we should have some special bragging rights, but to be fair only a few spectators left before dark. 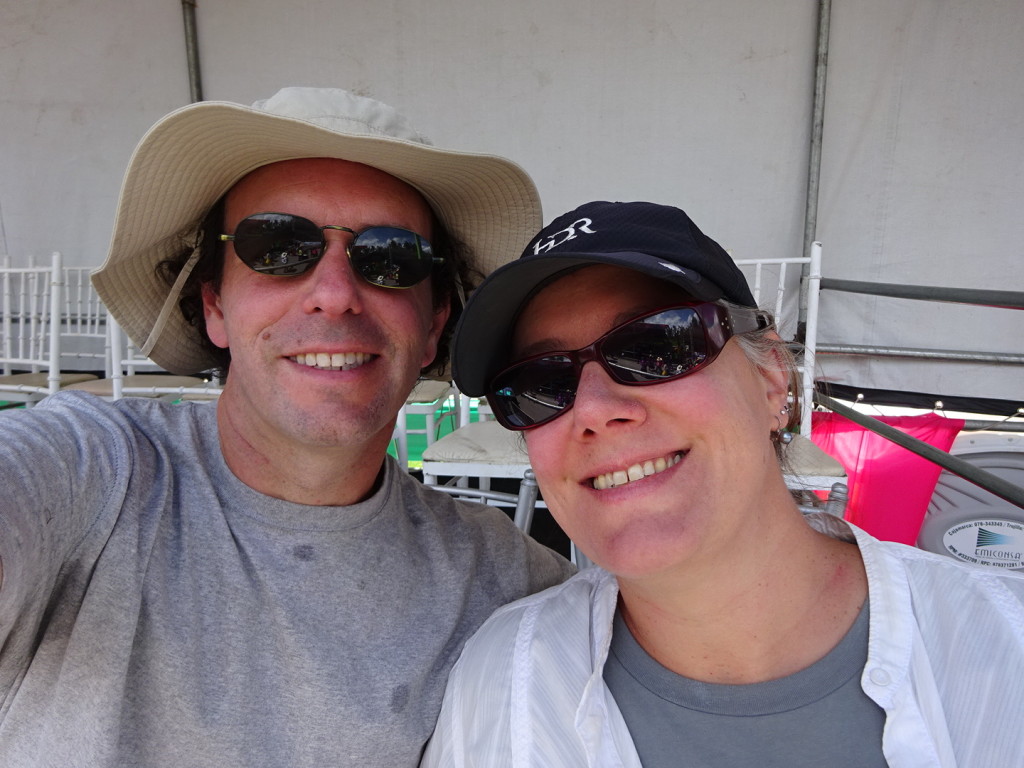 During our 3 hour wait for the parade to start! 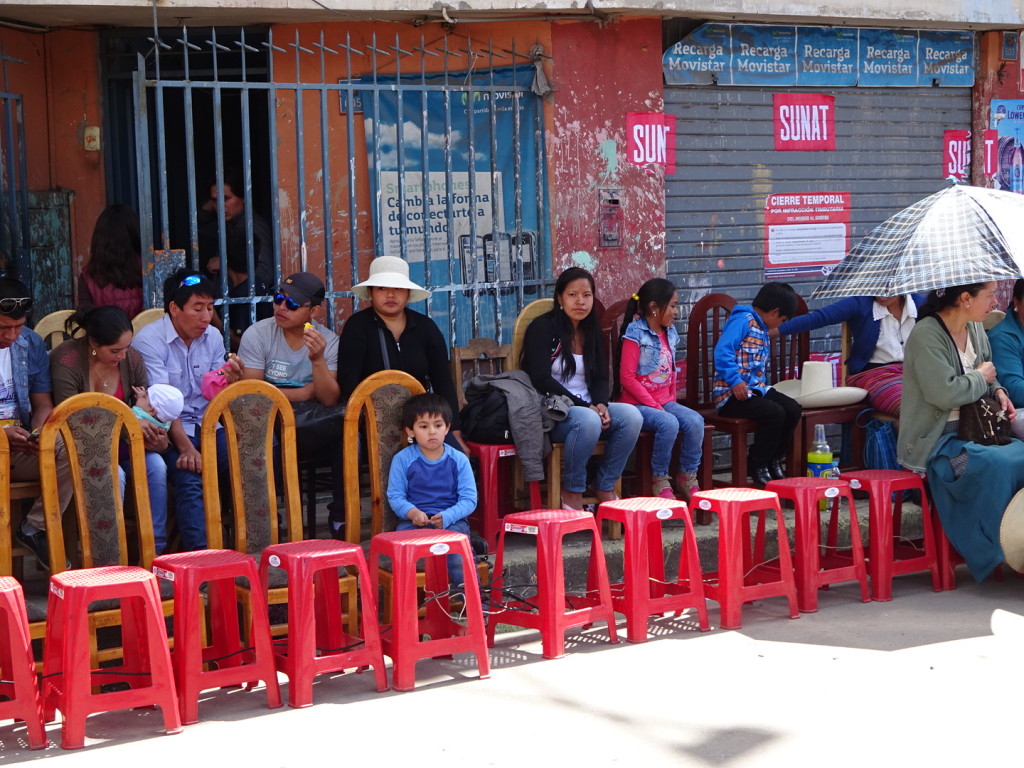 Everyone waits and waits for the parade to start. These seats were more than filled by the time it began 3hrs later. 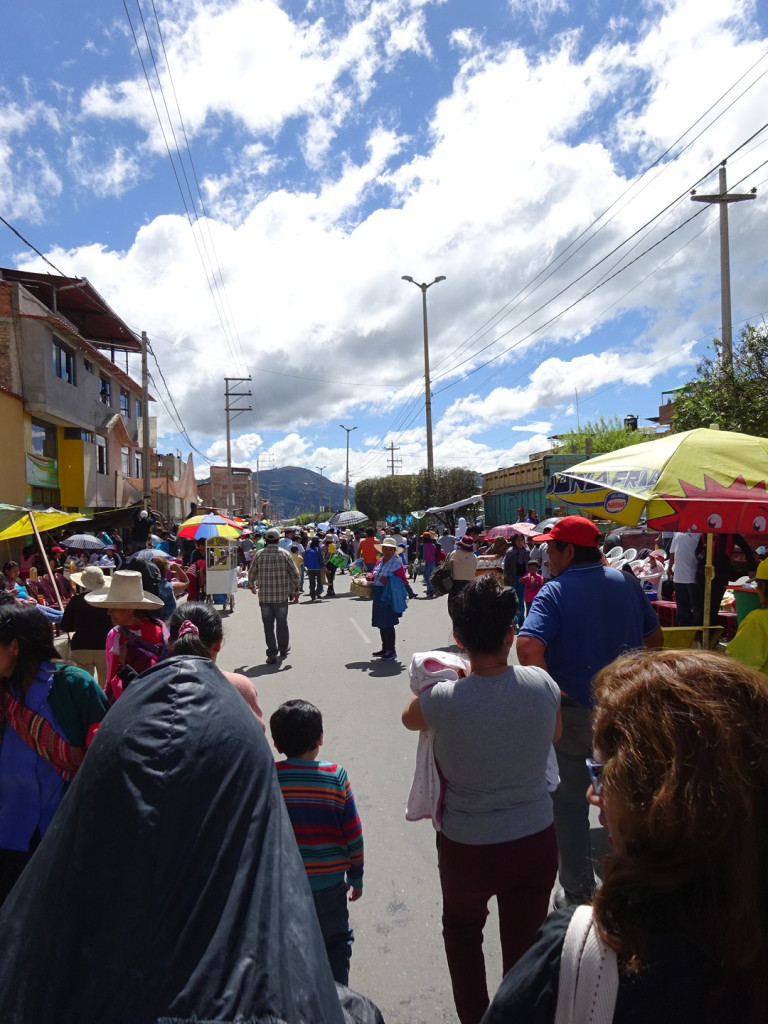 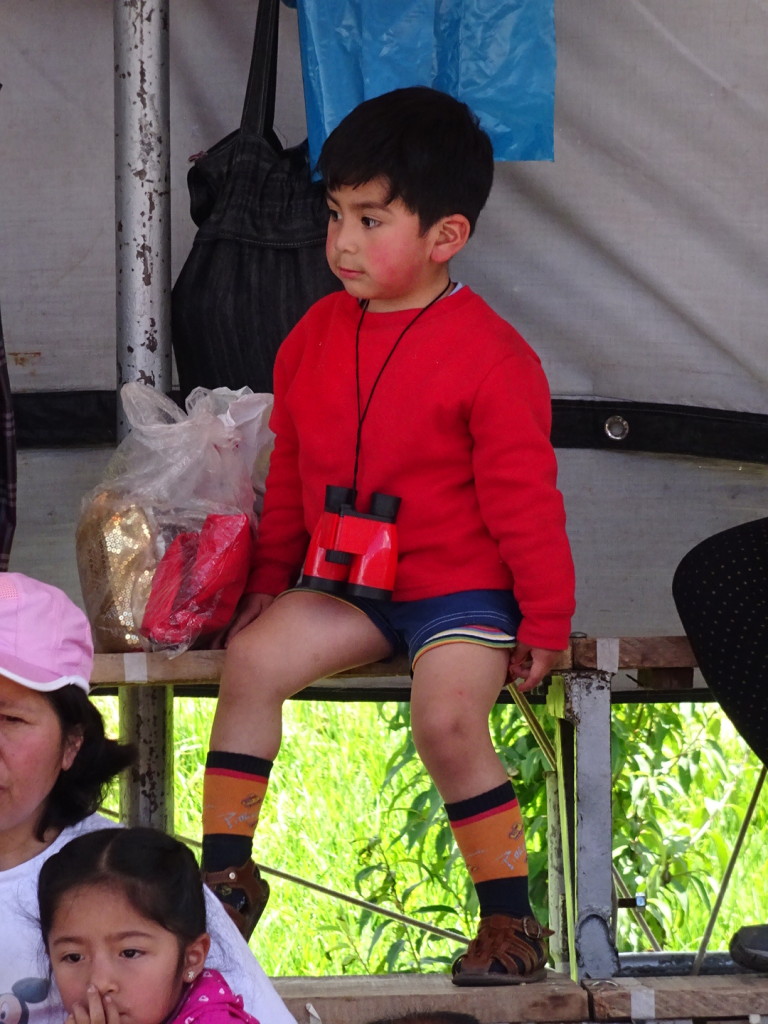 This little guy is ready with his binoculars and all!

Every household and business on the parade route sold seats and sometimes built stands and bleachers. 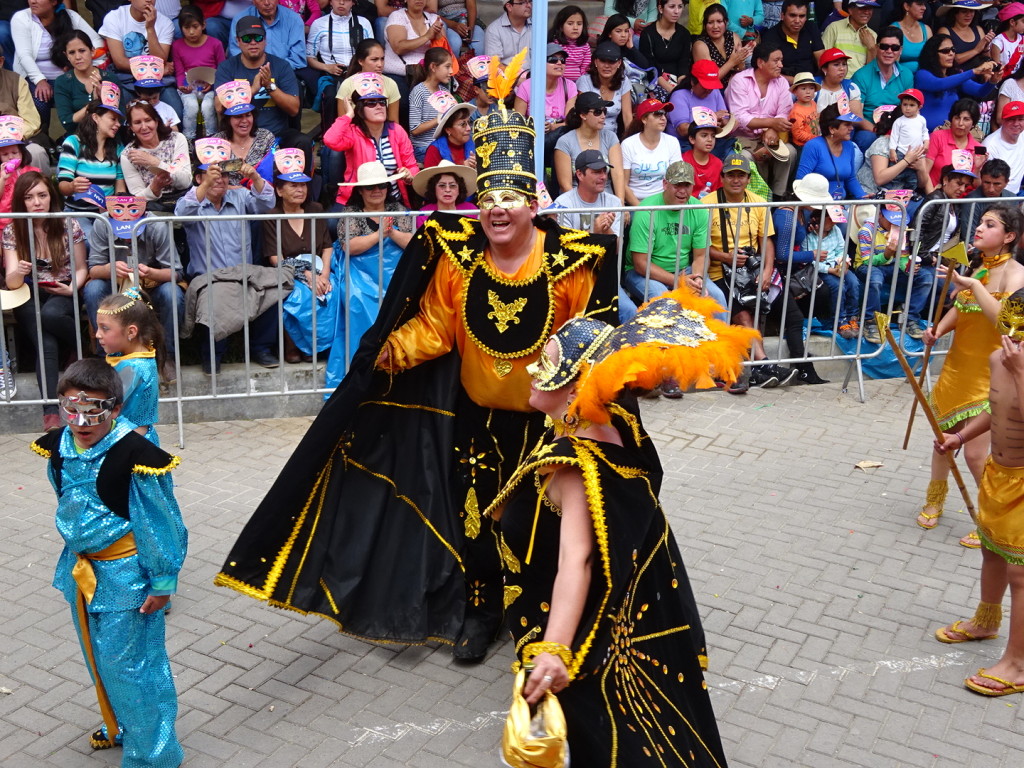 This is the Real King and Queen of Carnaval. They get the privillege of paying for the entire event!! Apparently it IS an honor to reign over Carnaval.

Lots of queens and junior queens. This is Senorita Carnaval! 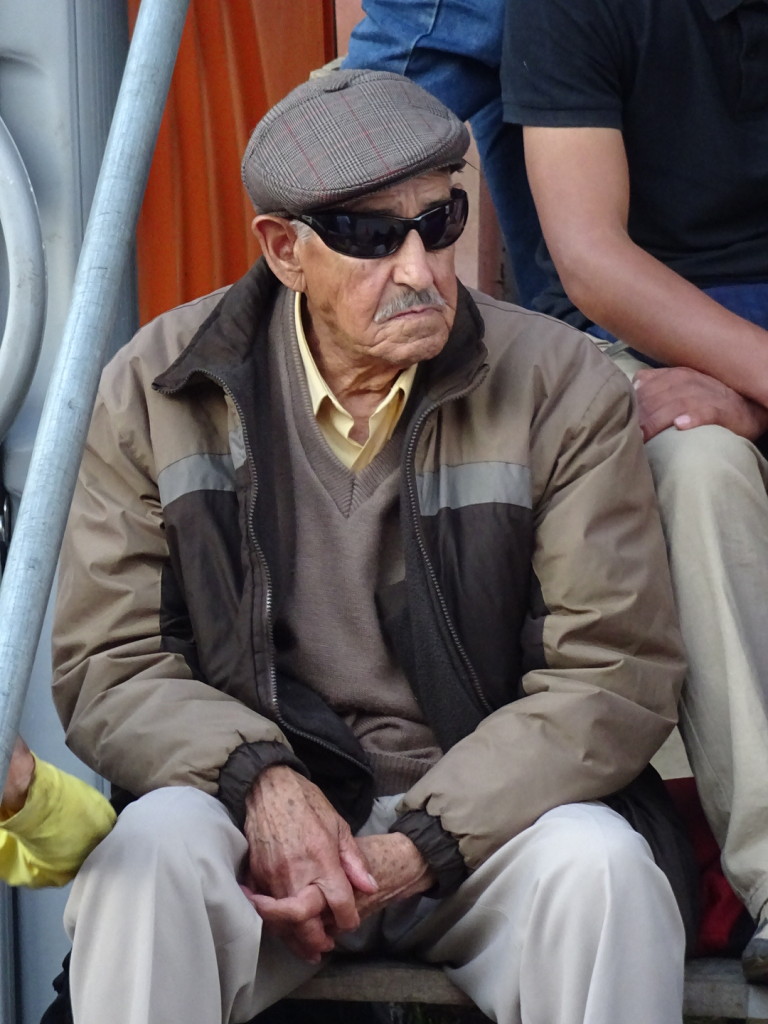 Love this character! He stayed for the whole parade and never moved a muscle. 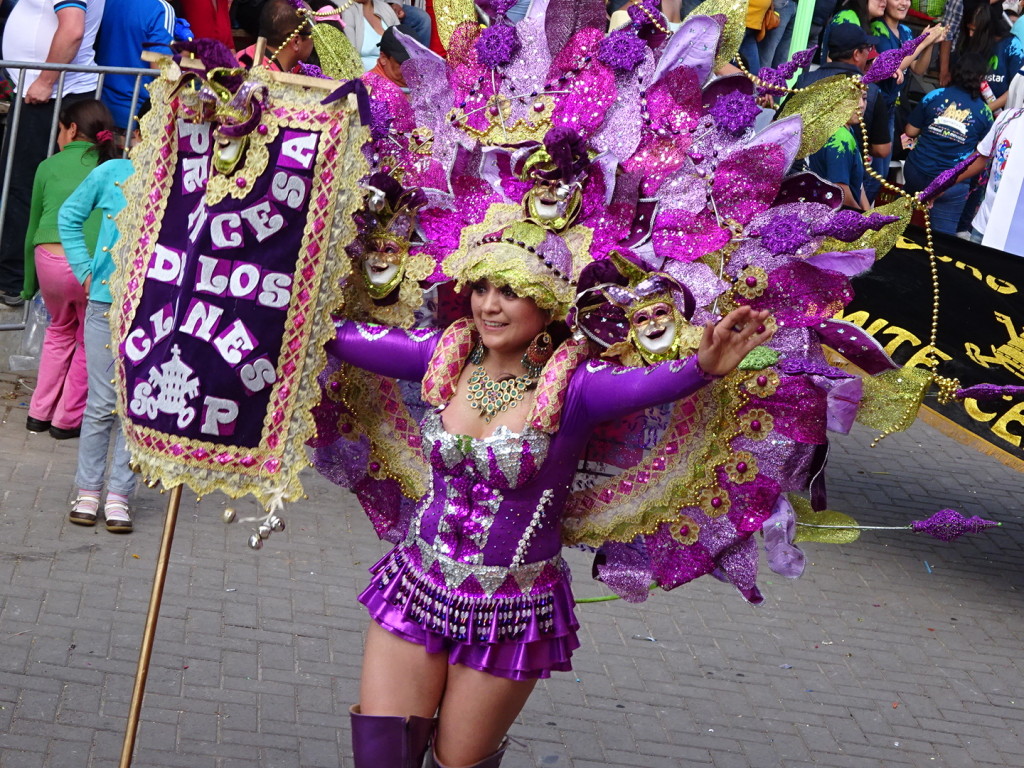 Every region around Cajamarca had their own section of the parade and the signs had abbreviations to connect them to their home area. The SP on the bottom of this sign stands for San Pedro. 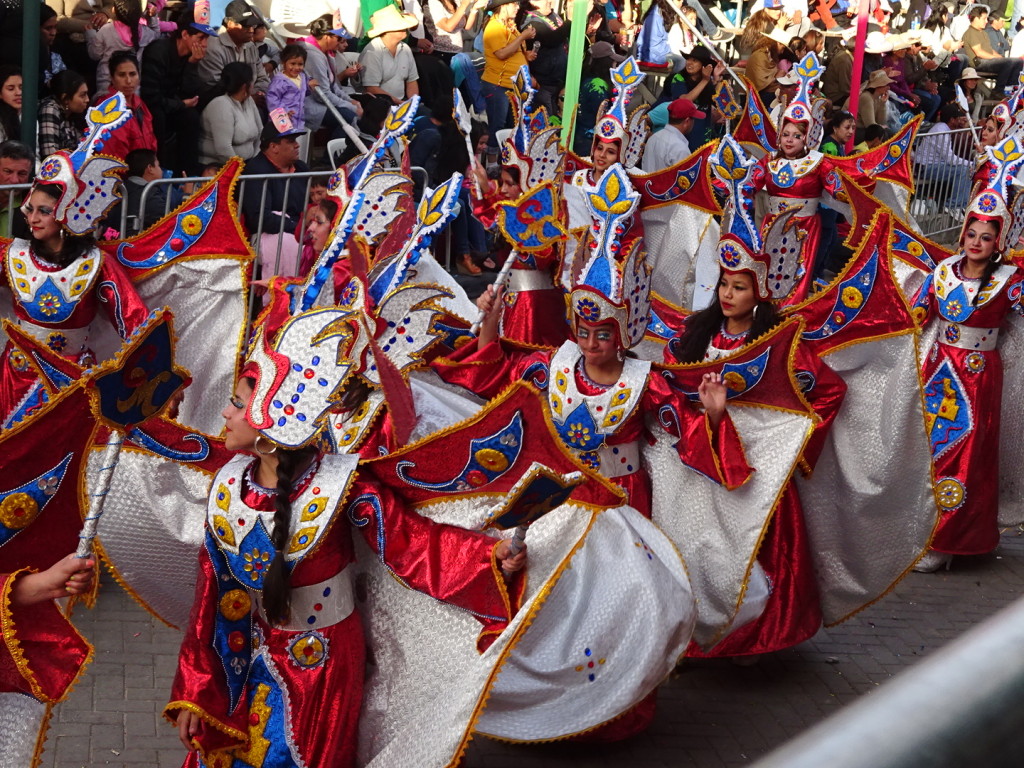 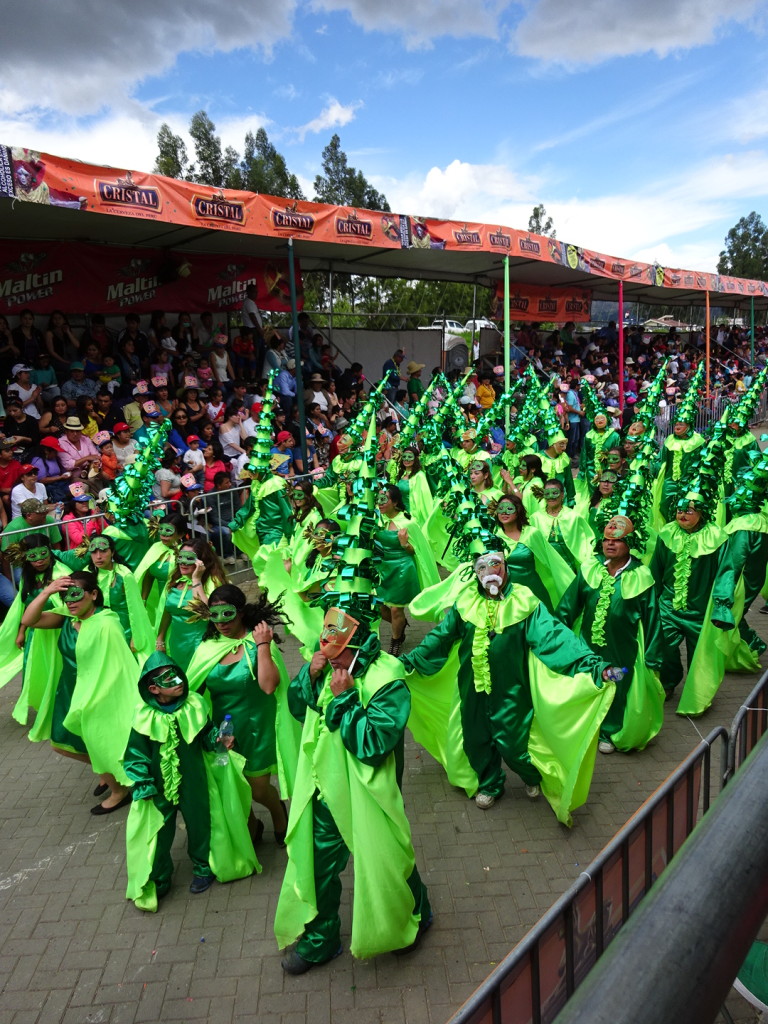 The big groups coming down the parade route looked awesome. Such incredible costumes!

As we understand it, anyone who wants to be in the parade can be, they ‘just’ have to go to rehearsals and make the costume.

And now some photos that need no captions. Feel free to click on any of the photos in our blog to make them bigger – great for seeing the detail in some of these costumes! 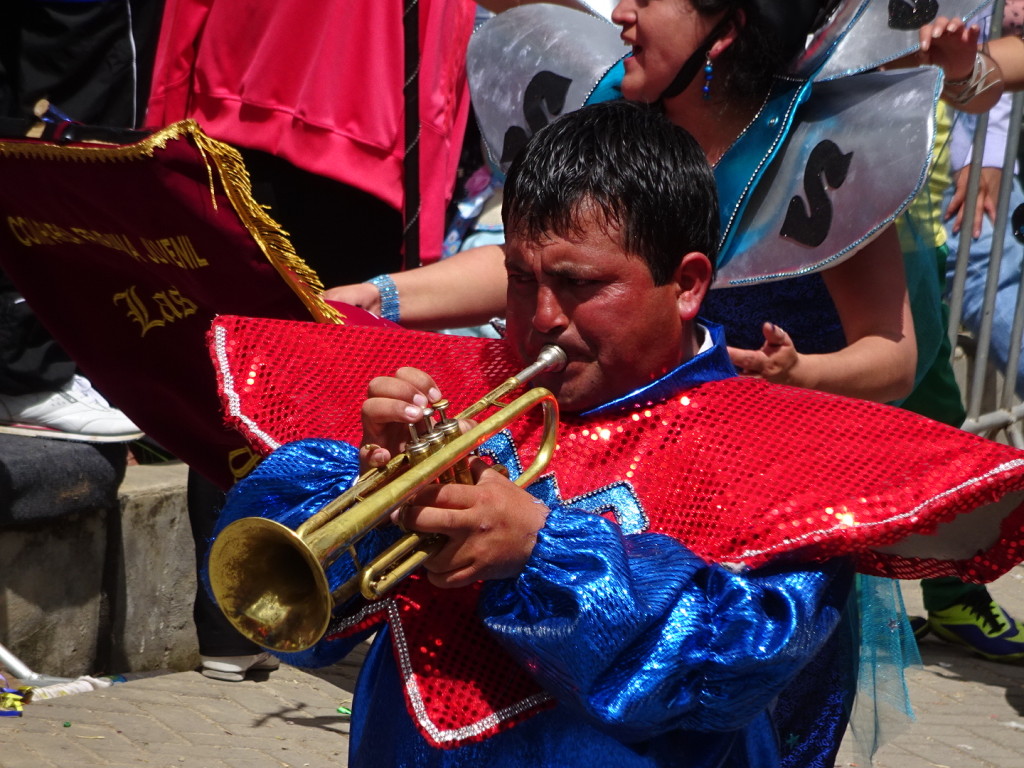 You can see everyone puts their all into Carnaval.

As we were told, Cajamarca definitely is the Carnaval Capital of Peru! From the paint party on Saturday to this Gran Curso parade on Monday, it was an unbelievable three days. We were so lucky to be here! Who’s up for coming back next year?

« Ice Cream: A Quick Post
Vilcabamba: The Jeweler and The Leatherworker »