This one goes out for all my dog-loving friends – and I know I have a lot of them!

Street dogs and family pets are just everywhere in Central and South America.  Here are just a few. 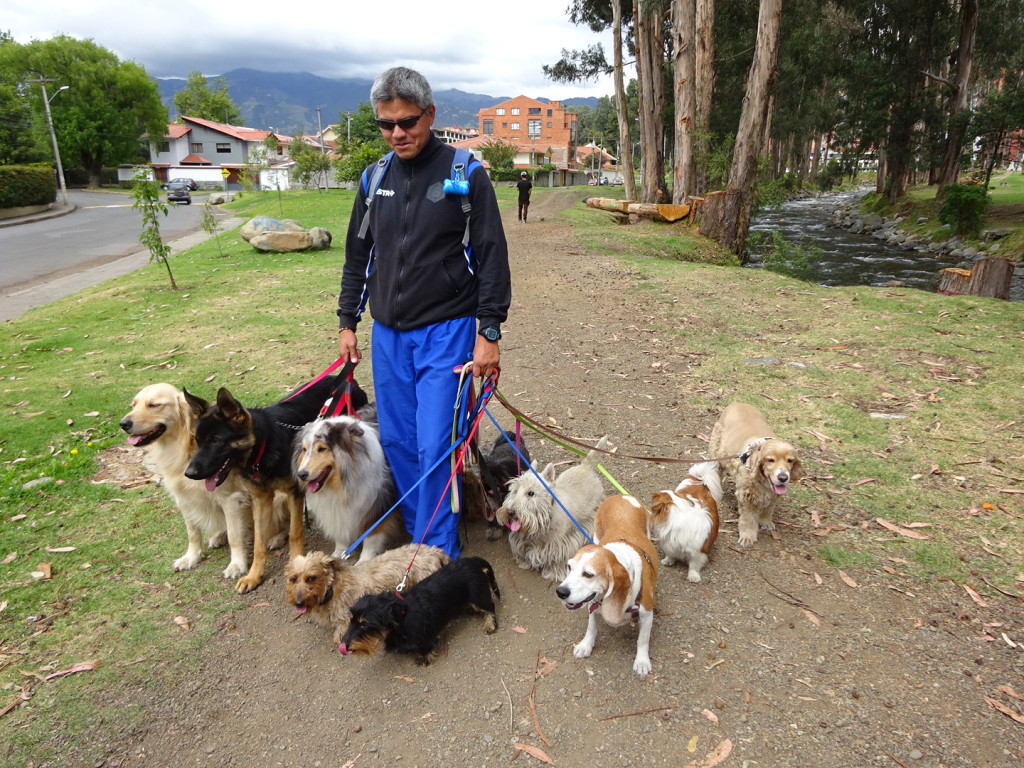 Here’s Luis, the best dog walker in Cuenca. He does four separate runs a day. 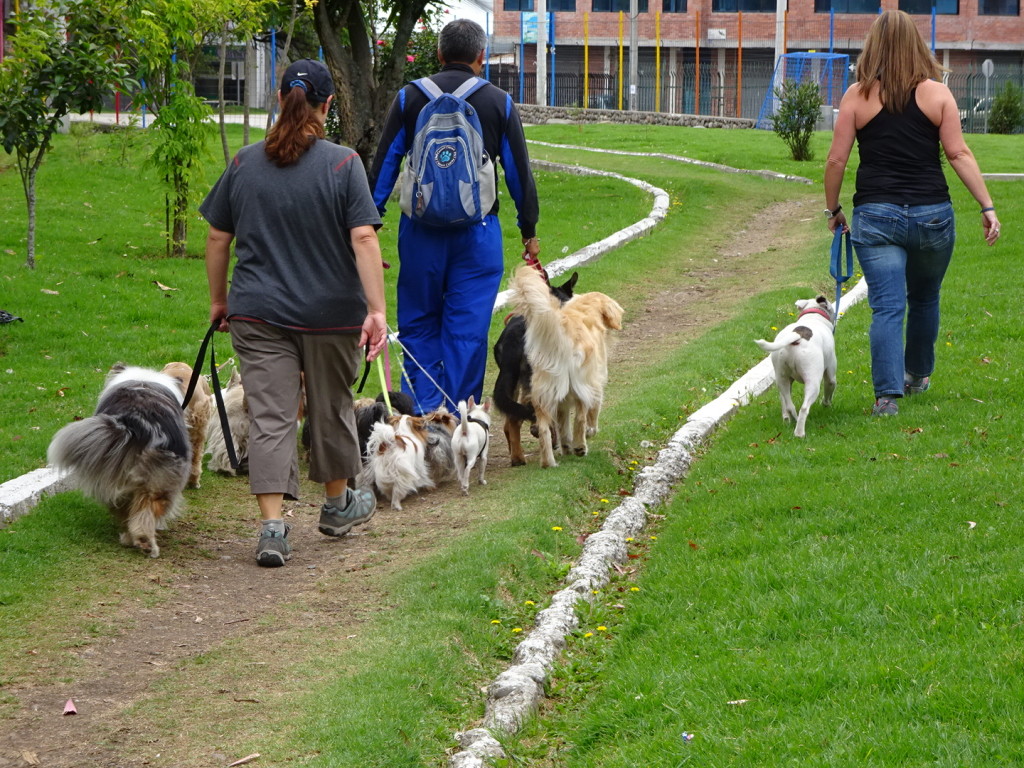 Even I got to help walk the dogs!

This is Doyle who we had the pleasure of pet sitting for. I’m simply in love with this most awesome prince of pups. It was hard to only pick a few pictures out of the hundred I took. 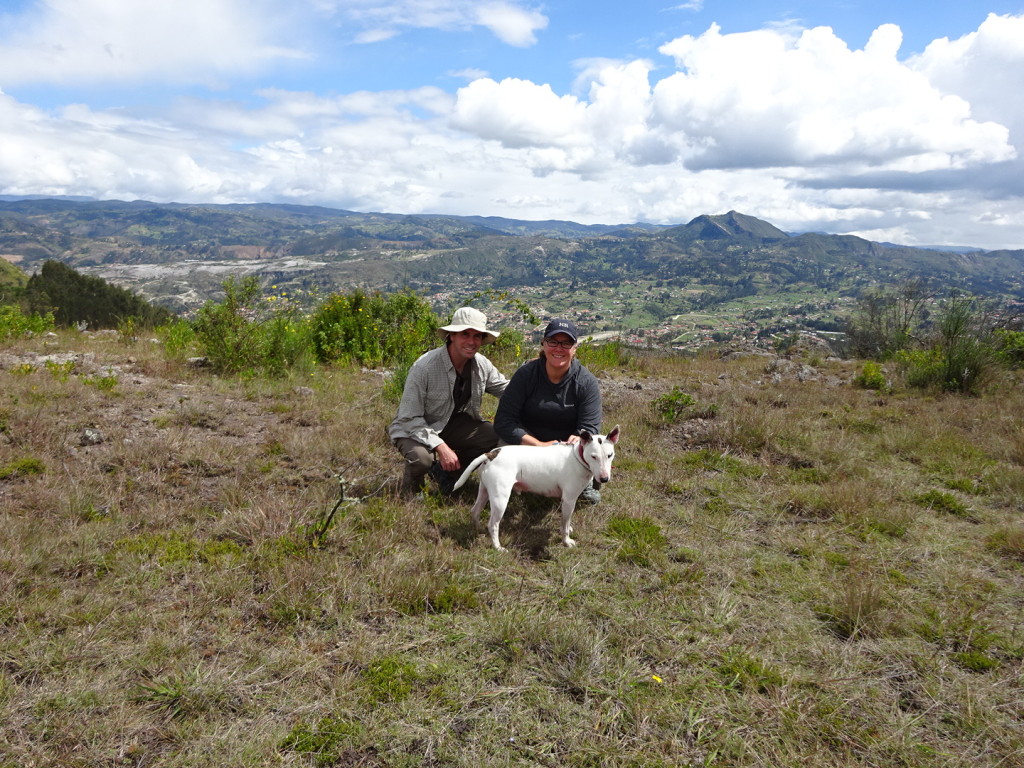 Taking Doyle for a run on the top of a mountain. So. Much. FUN! 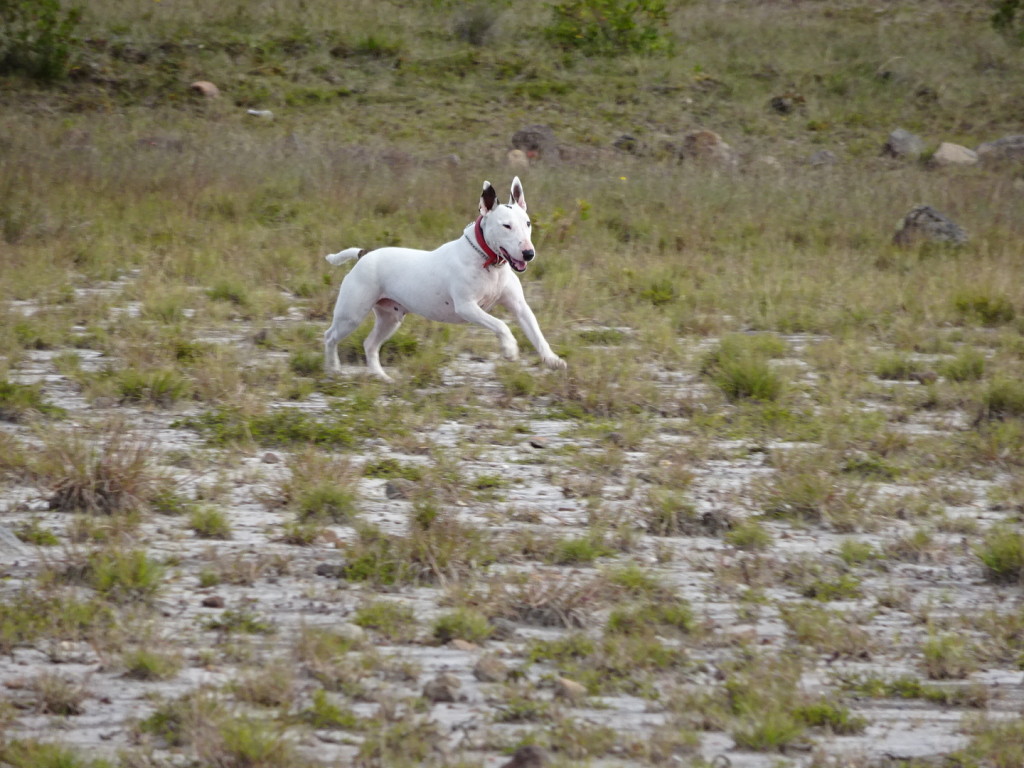 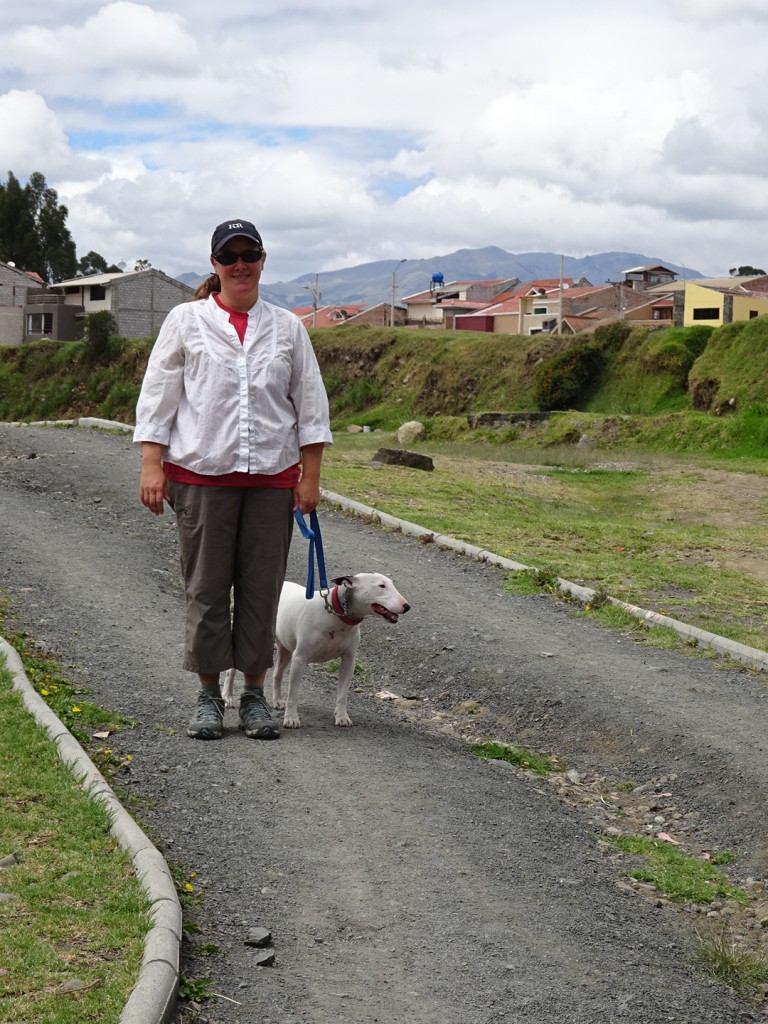 Out for our daily constitutional.

Ever see a dog roll an egg?  Well here you go! The wag says it all.

This part is most especially for my brother. Although these pictures are from Ecuador, we’ve seen huskies in Panama, Chile and Argentina. 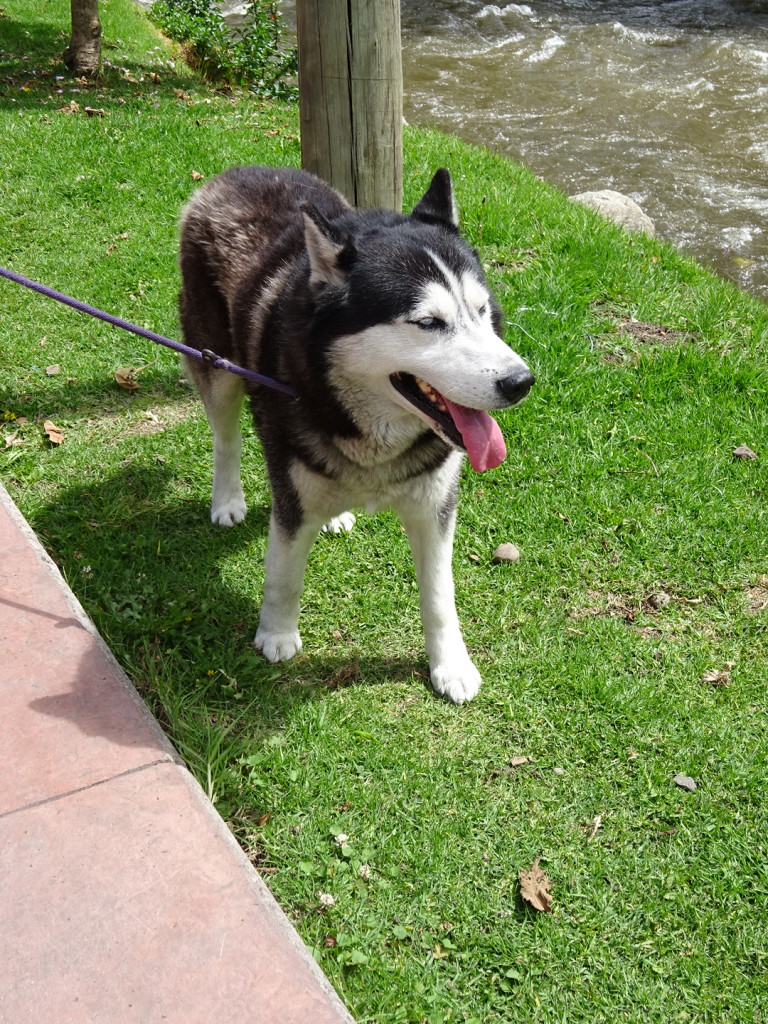 Cuenca, Ecuador. Our for a walk-about. 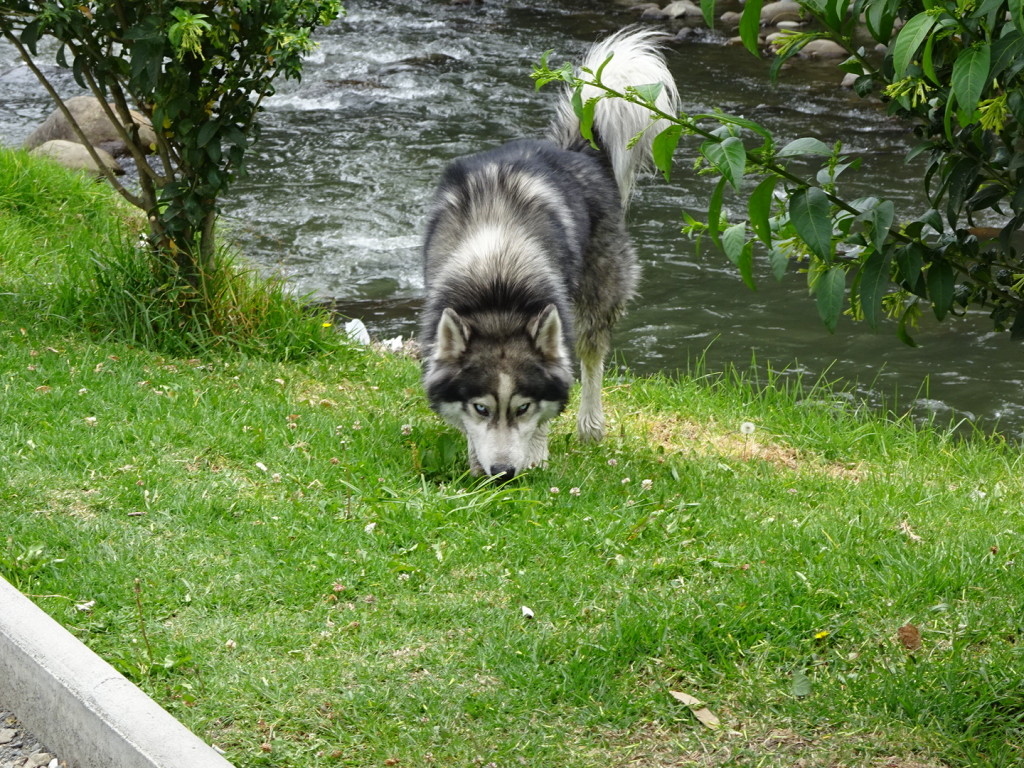 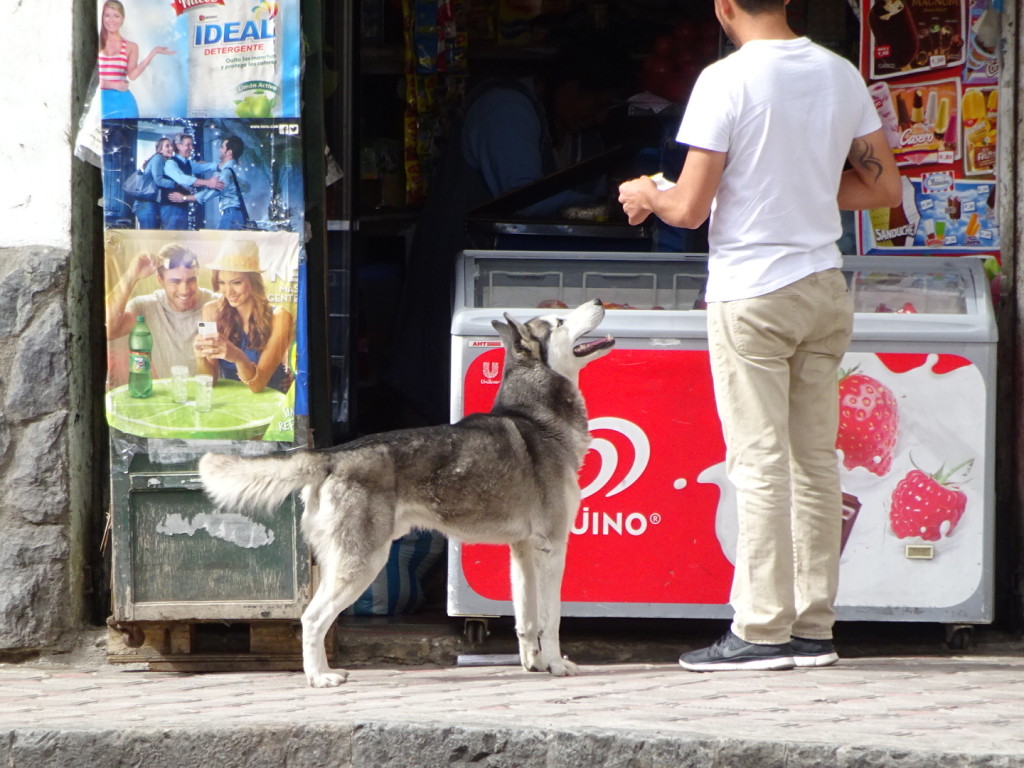 Cuenca, Ecuador. His owner went out for a snack and the pooch lead the way. The stand owner handed him an apple that he happily munched on. 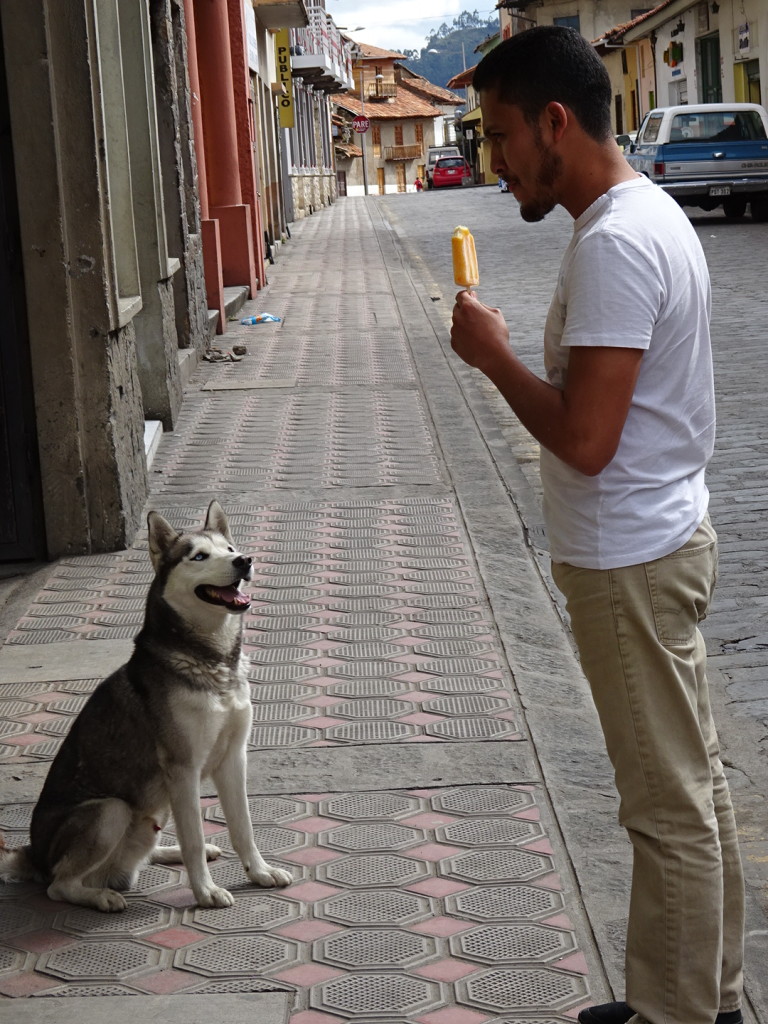 Waiting…for as we all know, an apple tastes best when followed up with a frozen snack.

All The Other Dogs:

To my surprise most of the time the dogs down here did not beg. In some places they don’t even bark! It was pretty common to reach a street corner and find three, four, five, six dogs all sprawled in the sun taking their siestas. Good idea, puppies. Good idea!

There was one place where the dogs were cute-but-annoying and did nothing but beg. Still, you’ve gotta appreciate their quiet persistence. I recorded them at lunch one day: The begging dogs of San Pedro de Atacama. 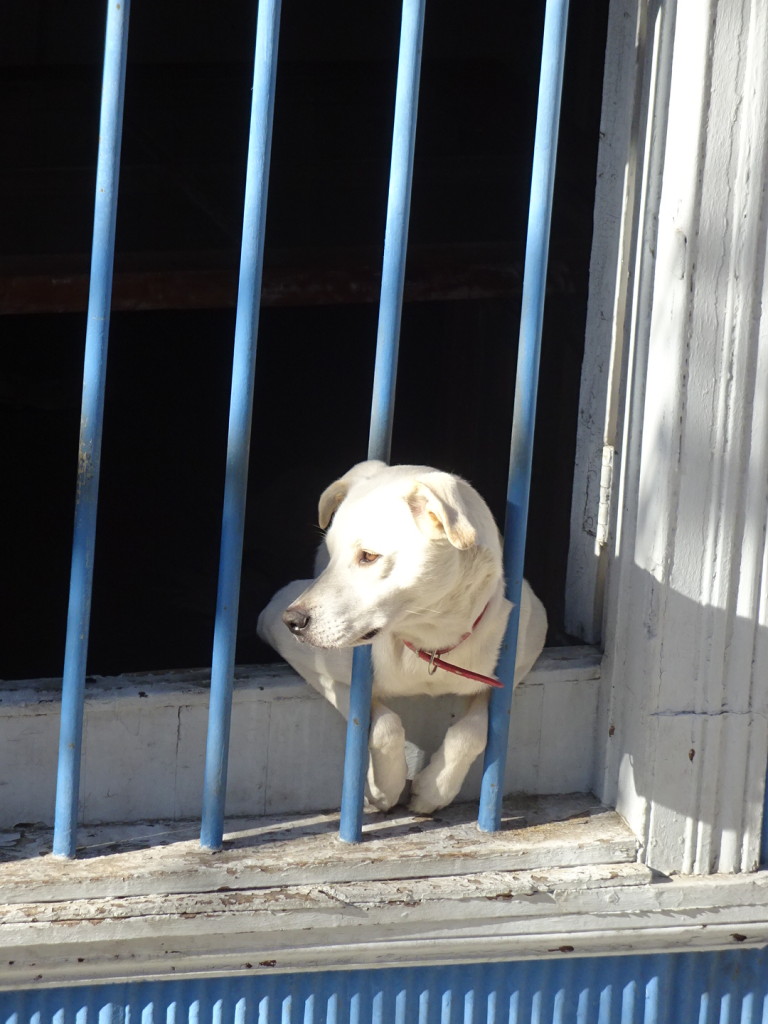 Valparaiso, Chile. This little guy got petted by every single passer-by. Then he’d run back into his house wagging like mad and running around before poking his head back out for more pets.

Wherever we’ve been, there always seemed to be one dog possessed with chasing cars. I’ve noticed they only seem to chase the fast cars…they leave the slow drivers alone. That’s interesting. This is a dog we named Death Wish. He was the first of this variety that we met. After he chases the car he runs up to Aaron and sits down waiting for another fast one to come by.

We also noticed, not surprisingly, a lot of dog with paw injuries, which we can imagine comes from chasing the fast cars. A metaphor for life? Stop chasing the fast cars, boys! Hah! Unfortunately there’s no care for them and they just have to hobble around the rest of their lives. The dogs, not boys. 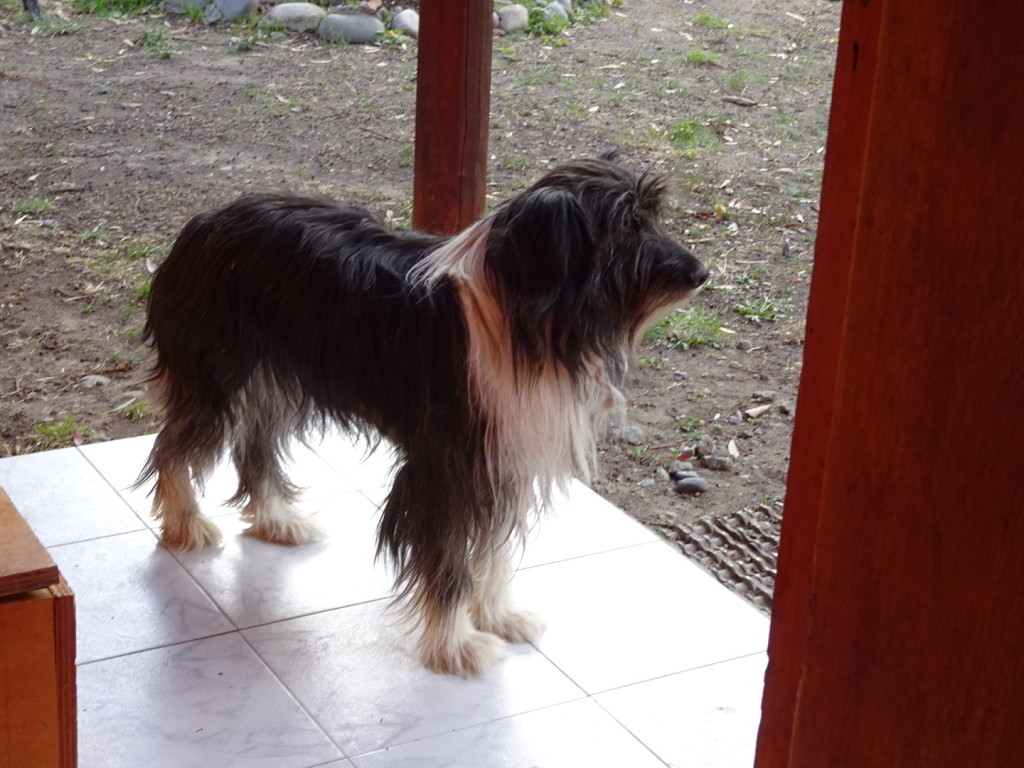 Chile Chico, Chile. This is the house dog at Lo Del Ale – the campground we stayed in a cabin with six people we had just met. He was friendly and just wanted to sniff out the new folks. 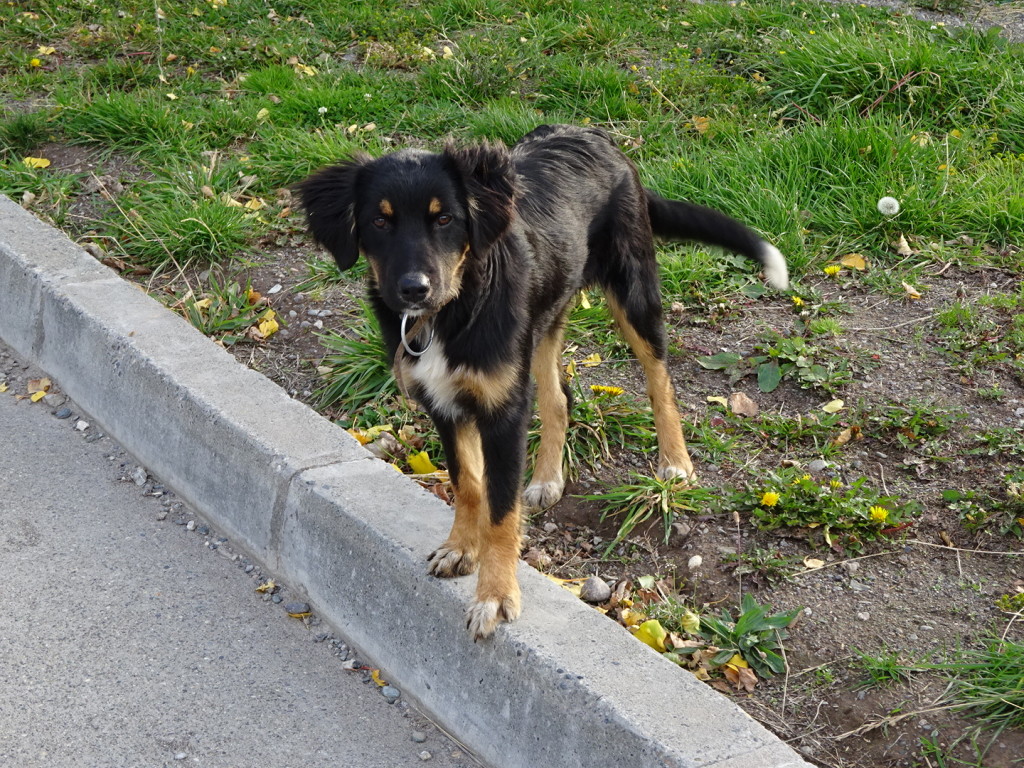 One of the many street dogs in Chile Chico that took a liking to us. They followed us everywhere and slept on our steps waiting for the occasional treat we couldn’t resist tossing them. 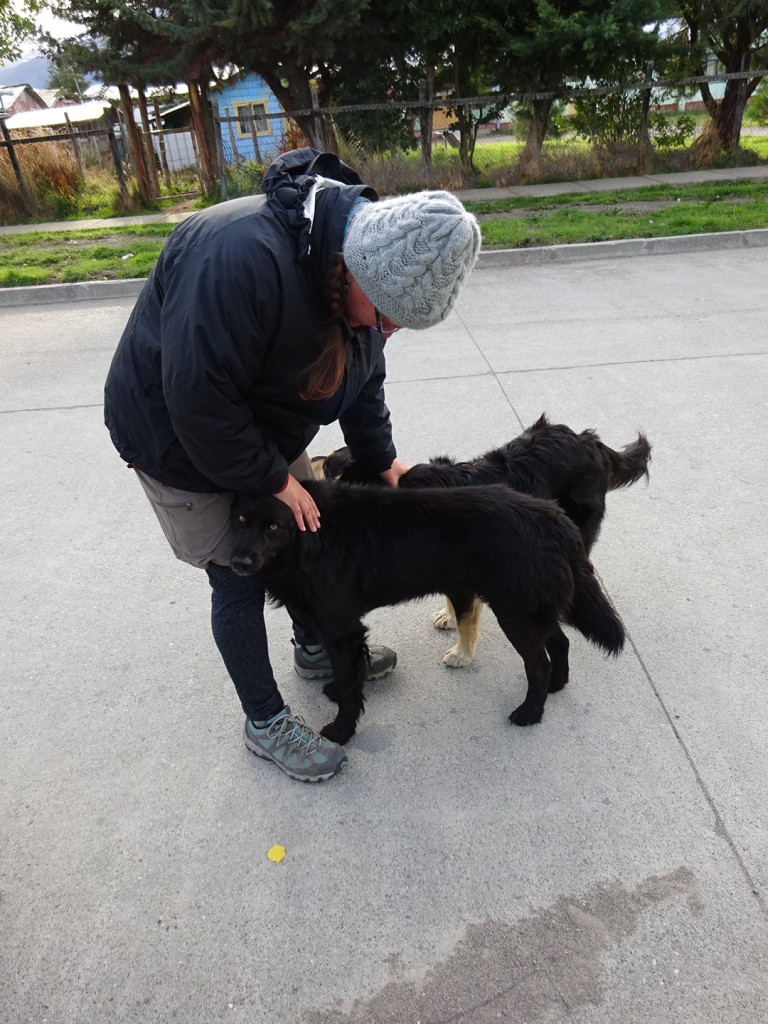 Chile Chico street dogs I would have taken home in a minute! 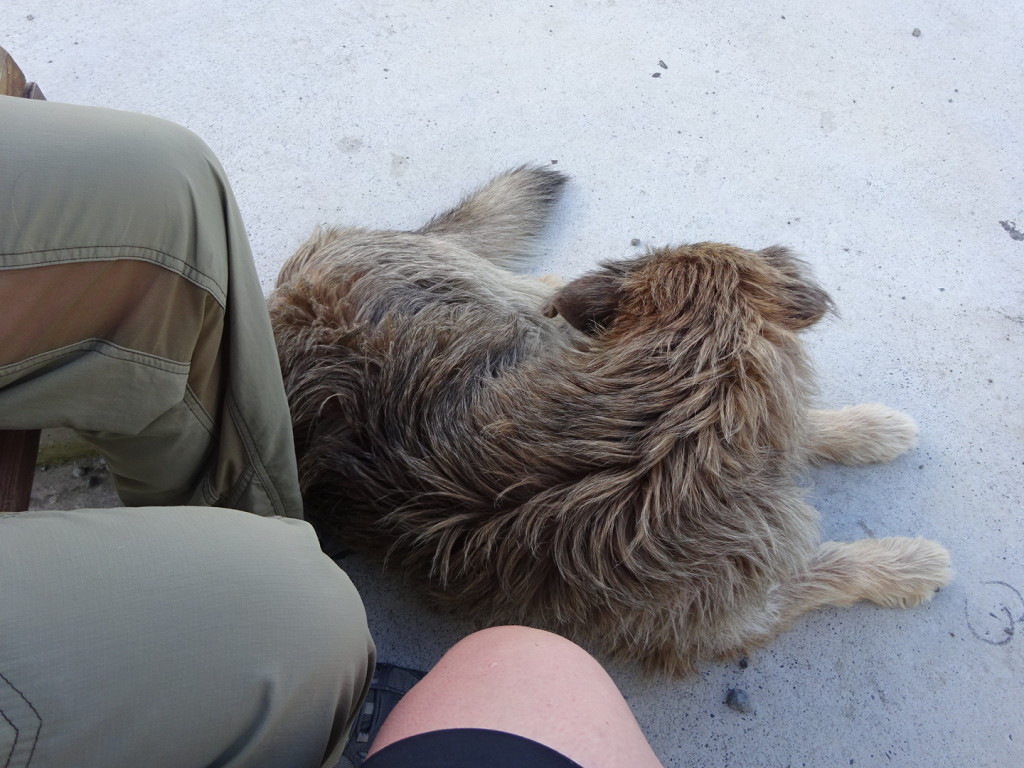 Puerto Varas, Argentina. We sat on a bench and this guy came along and leaned all his weight into Aaron and then slid down onto his feet – so Aaron wouldn’t go anywhere. Aaron gave his matted tuffs a good pet. 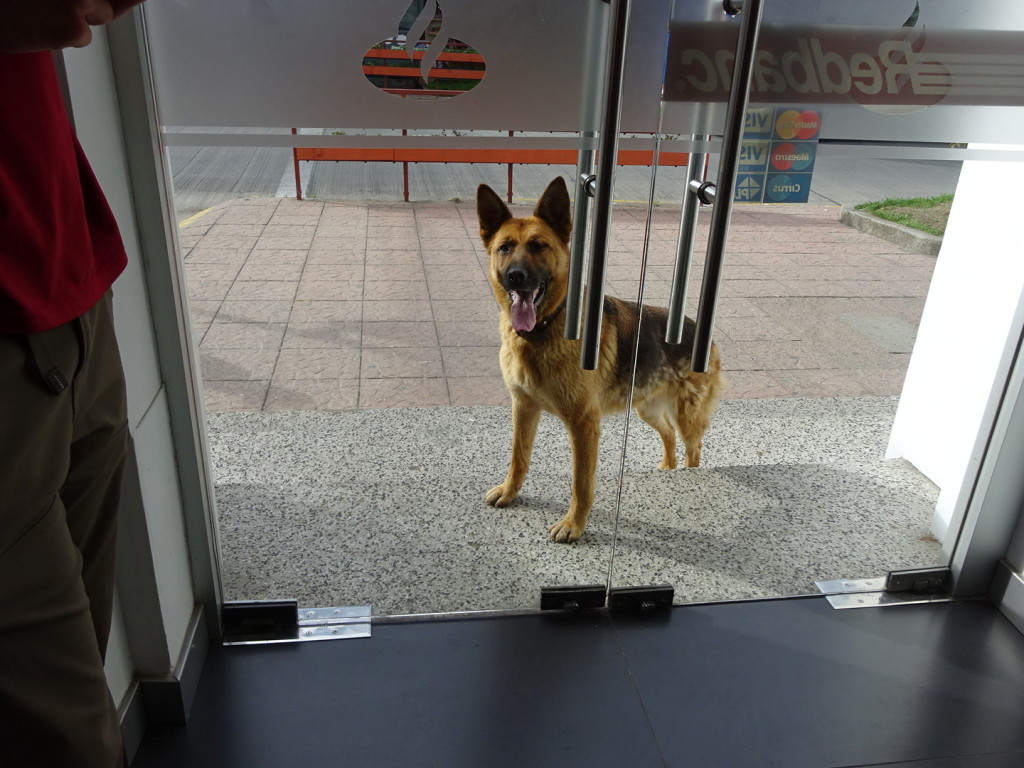 Puerto Varas. This sheppard followed us for about a half-hour – absolutely intent on having some of our ice cream cones. He licked Aaron’s back pocket leaving a big wet spot – HA! Then he playfully nosed my hand looking for a pet. Finally when we stepped into a bank he whacked his head into the door trying to follow us. For all that, we did have a little bit of ice cream to share after all. 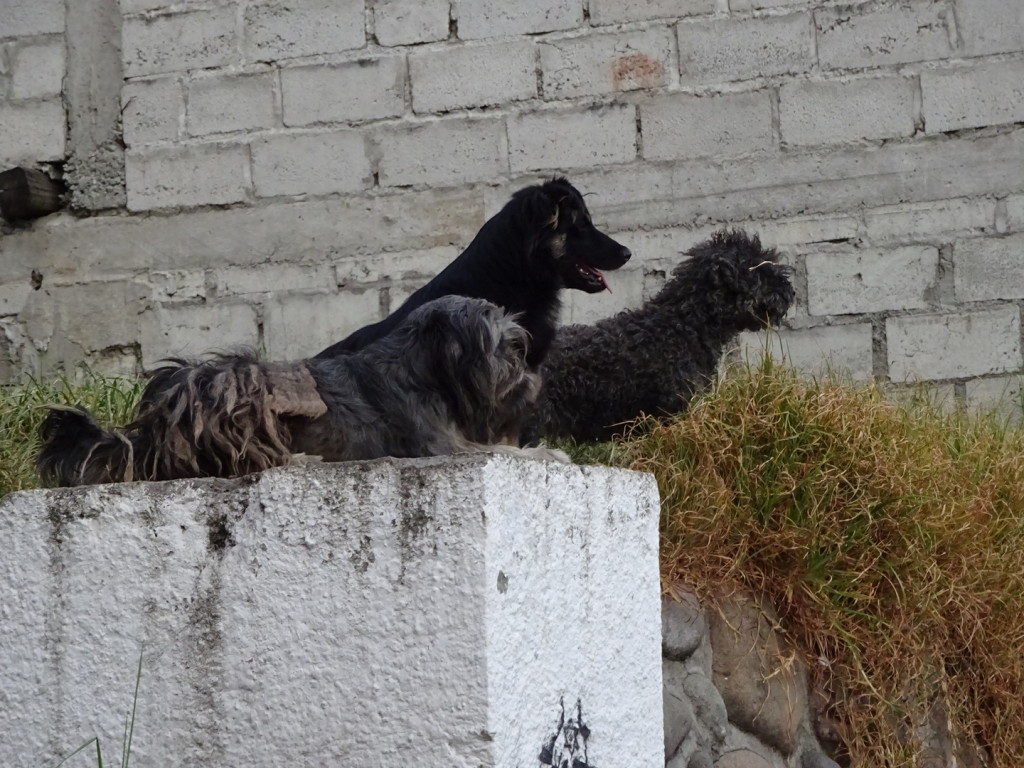 Check out this crew! A small gang of Cuencan street dogs that took the high ground and watched with keen interest. 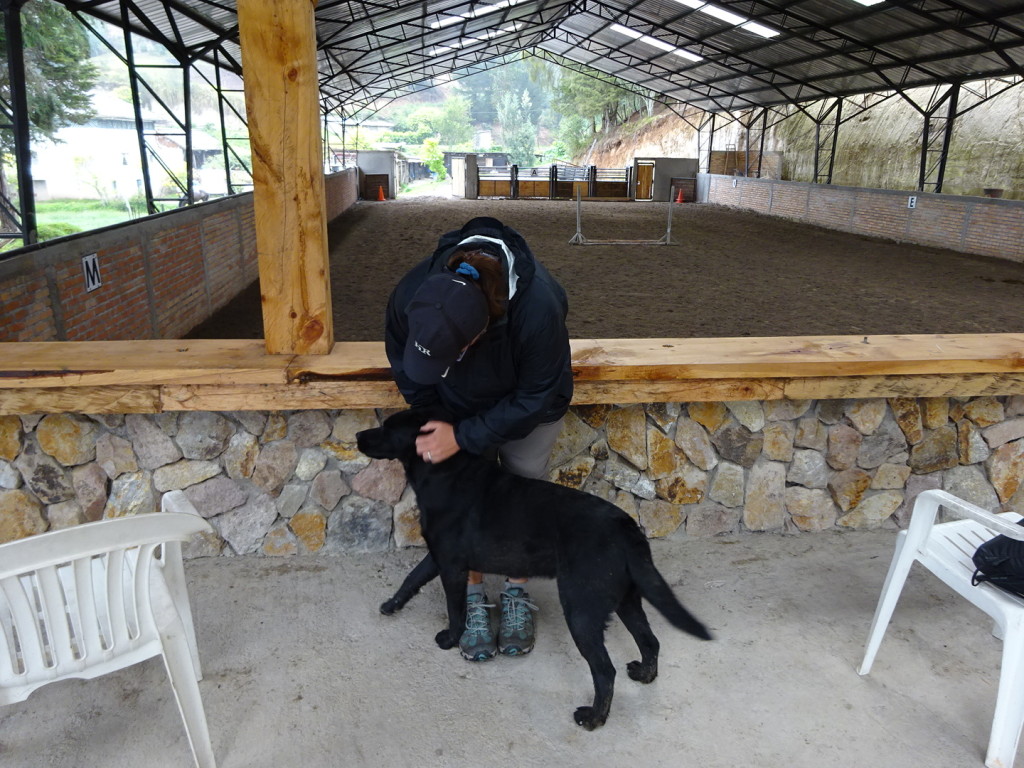 In Ecuador we took our first horseback ride and this fellow lived at the center. Sweet as could be, he was 100% muscle as he leaned in hard for a good pet. He goes on all the horse treks – trotting miles and miles happily every day. 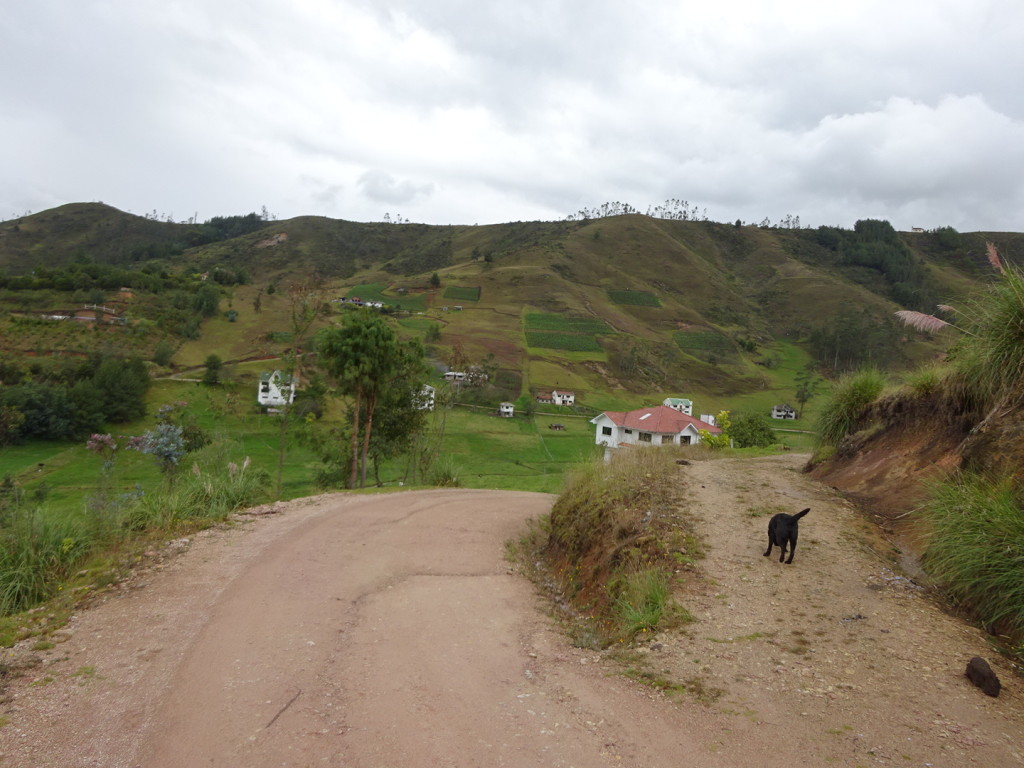 Walking with us on our 2 hour horse trek… 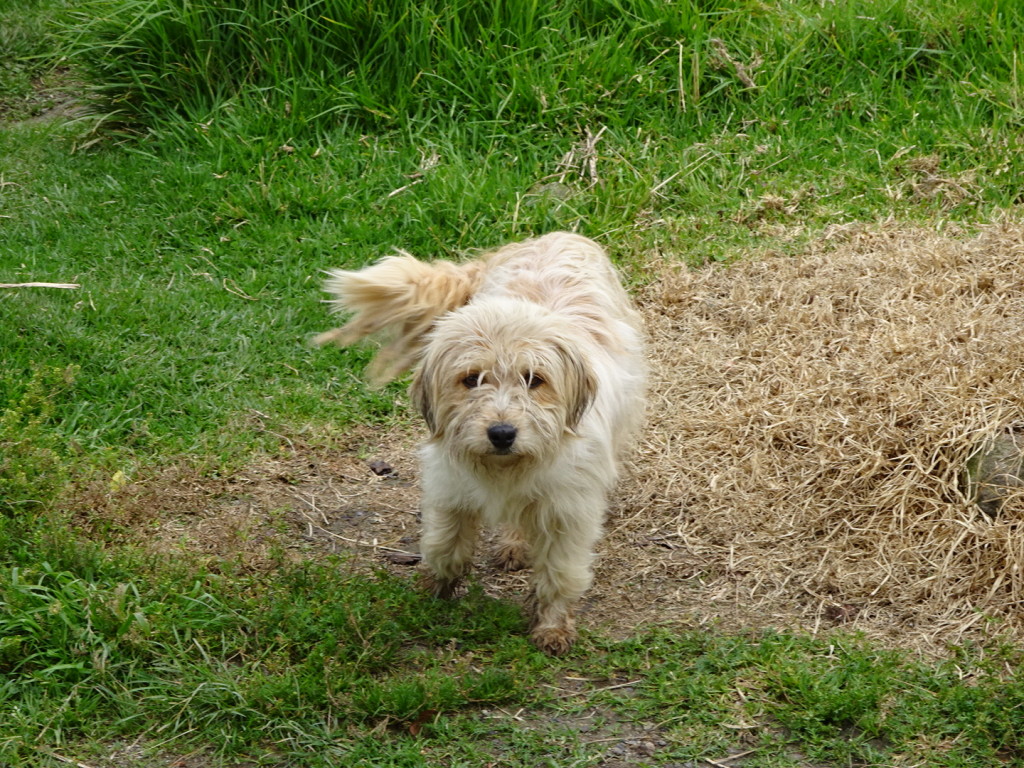 This pup followed us up and round the little village of Saraguro, Ecuador for a couple of hours, ducking into every yard along the way to say Hello. 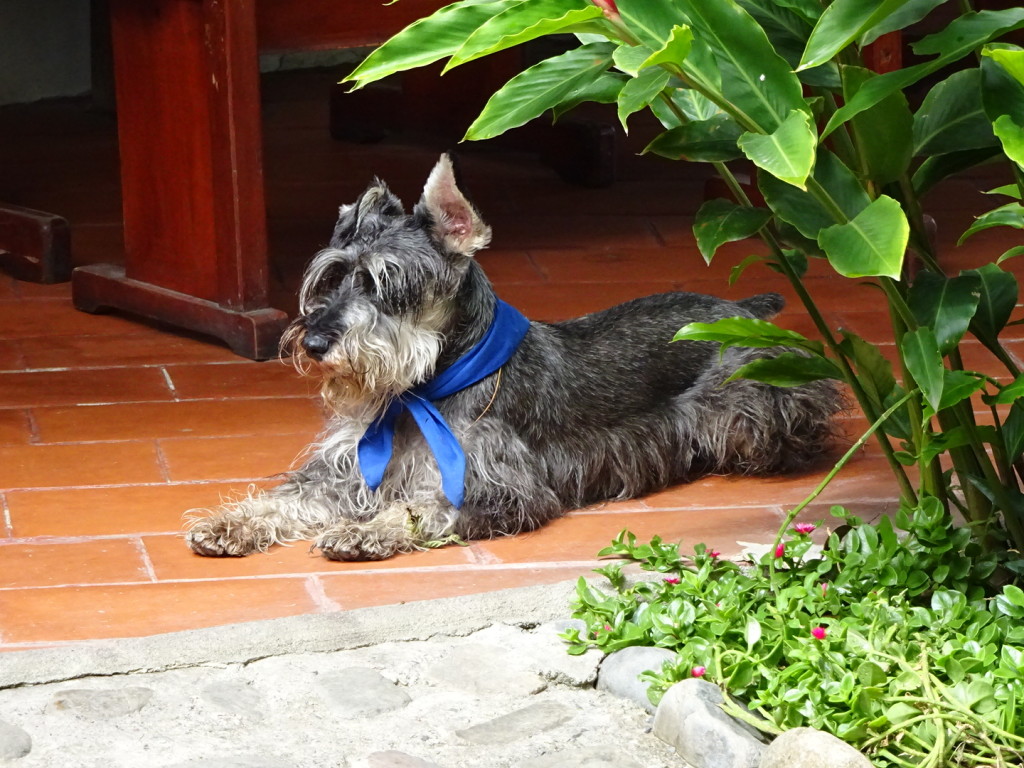 Vilcabama, Ecuador. This furry friend lived at the fabulous hostal/resort we stayed at – every day a new neckerchief. 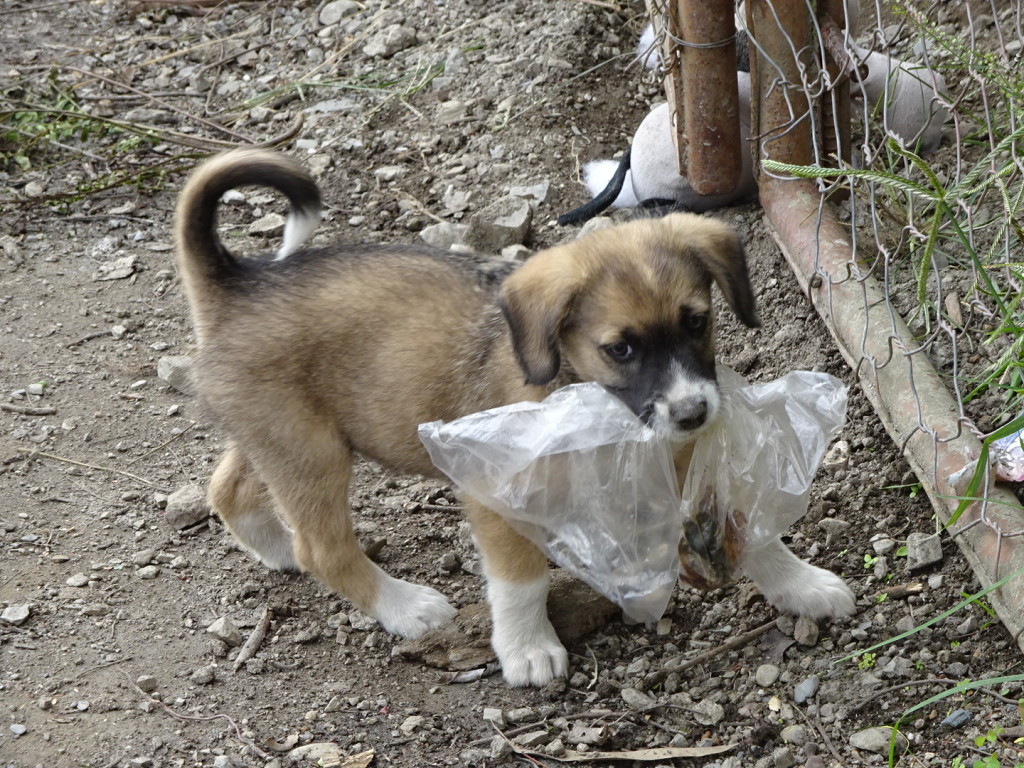 Vilcabamba, Ecuador. This pup got out of the fenced yard but couldn”t find his way back in. He spent a lot of time trying to get the food out the bag but couldn’t figure that out either. It’s hard being a puppy. 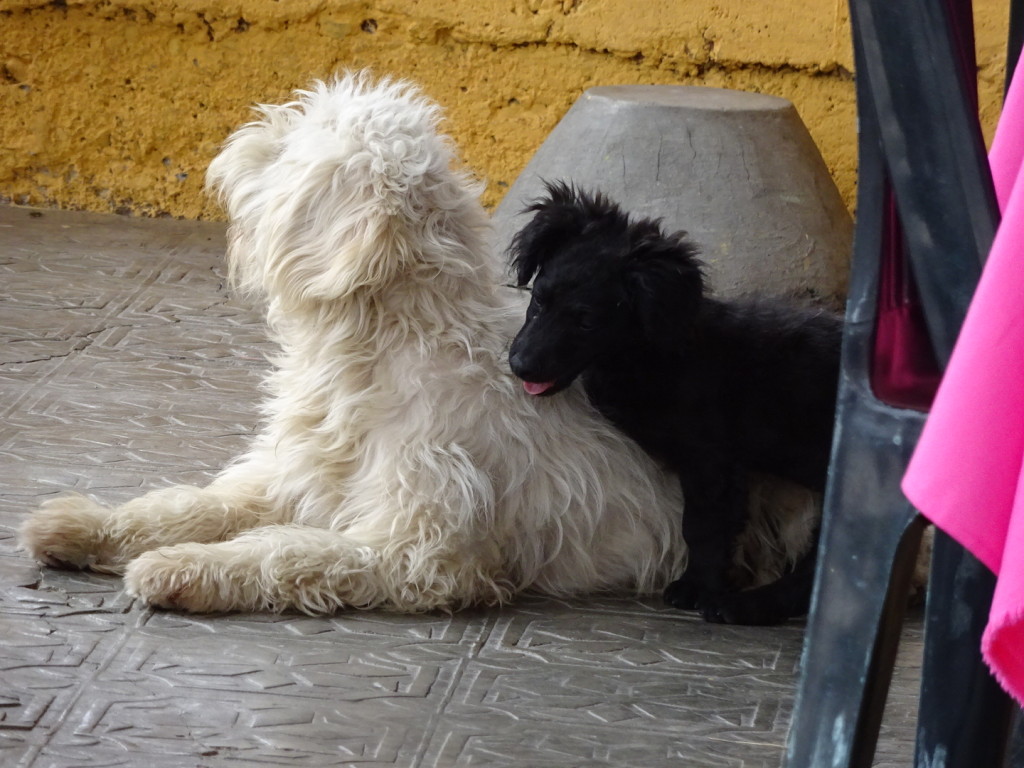 Vilcabamba, Ecuador. I could not stop watching these two – the little black fuzz ball just kept wanting to play with the big white fuzzball. They scrapped and rolled and tussled all through our lunch. 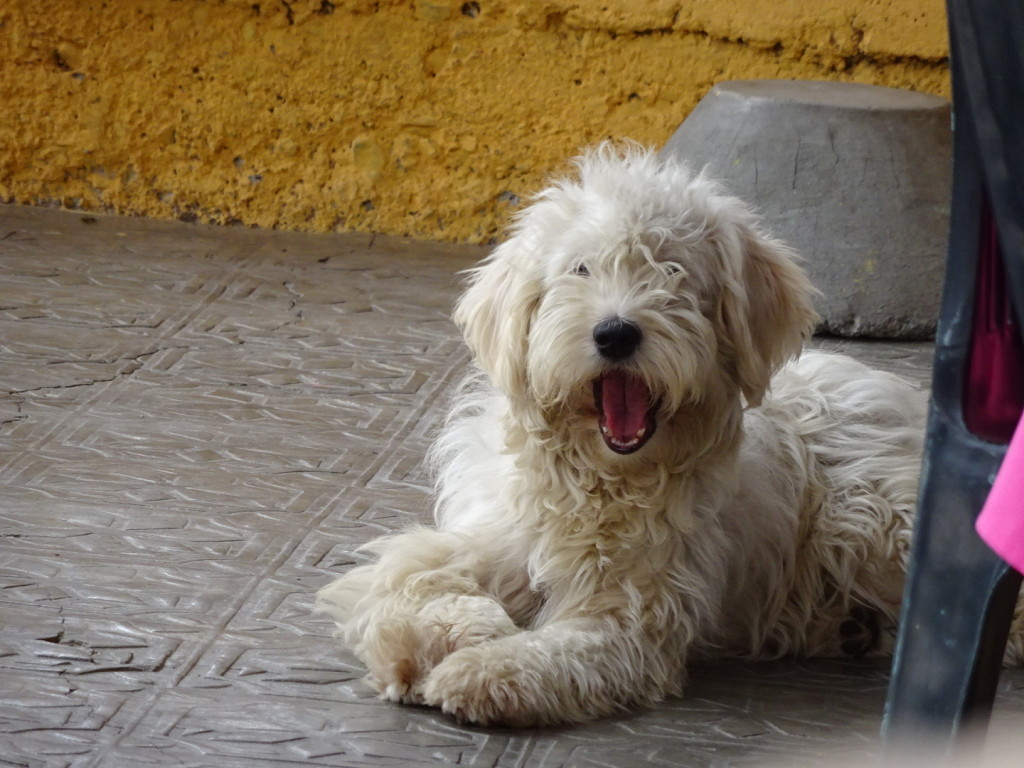 I think this is the doggification of my stuffed dog, Barry. You can see his paw is bent funny. He’s one of the many dogs we saw with paw problems.

There were so, SO many more dogs, but I eventually stopped taking photos. I might have used up all the space on the computer had I not shown just a little restraint. The dogs of South America were six months of comic relief – with all their doggie personalities on display. Wonder what we’ll find in Africa over the next three months?