How to Explore Patagonia as a Softie – Part 3, The Boat

How to Explore Patagonia as a Softie – Part 3, The Boat – Chile

(Wondering how we got this far? Check out Part 1 and Part 2 of our Patagonia adventures!)

More than anyother time on this trip I can imagine my dad with us on the Navimag. He would have *loved it*. Dad always had the wanderlust and he loved being on boats. He and his cousin went boating over 60 months in a row — in Minnesota. Twenty below zero and ice on the river? He’d say, “We can chop the ice out! Let’s go!” I can imagine him puffing his chest out and strutting around the house telling Mary, or whoever was over for coffee, about how his kid was taking a South American supply ship / ferry through Chile. This boat ride screams ‘dad’.

Check out our sweet ride! Arriving to board the Navimag!

We first saw the Navimag in dock while out exploring in Puerto Natales. Then we ran into a hostel host who had taken it. We grew interested. Then we realized that it would help us cover a pretty good distance on our path north: from Puerto Chacabuco to Puerto Montt. We both thought that sounded like fun – count us in! 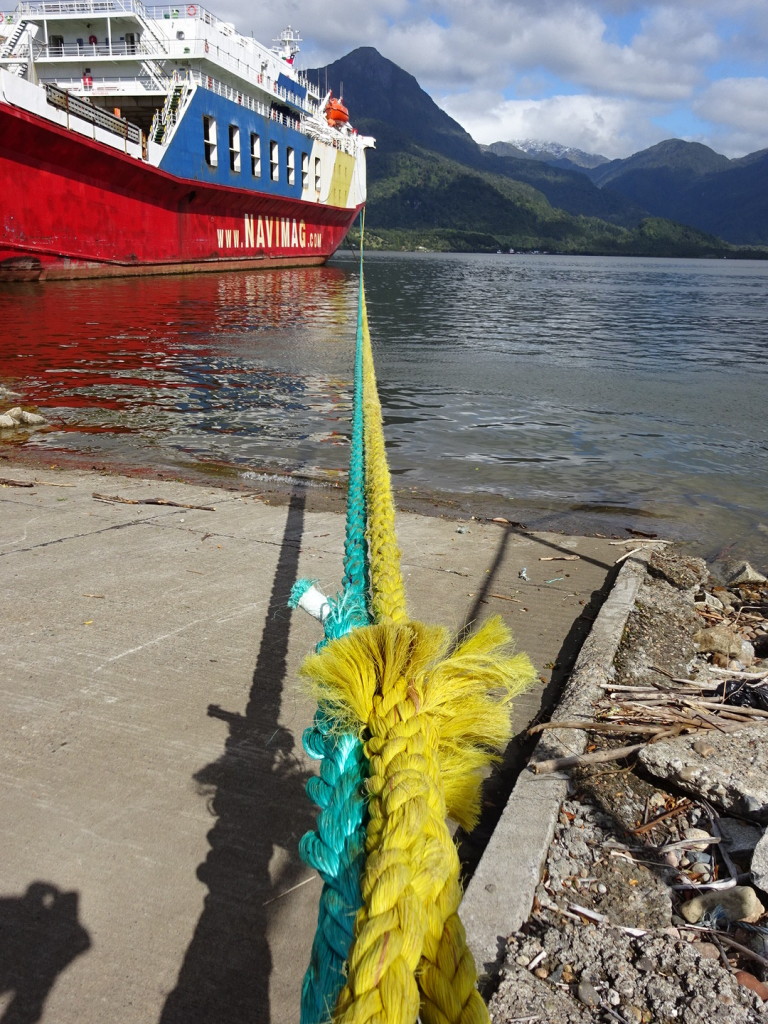 My favorite shot of the Navimag before we boarded.

As we checked in a few hours before we set sail we counted 3 or 4 other tourists. The rest were locals including, to our surprise, several families with small children. I guess having a private berth for the 4-6 of them was probably cheaper than individual bus tickets, and definitely more comfortable! 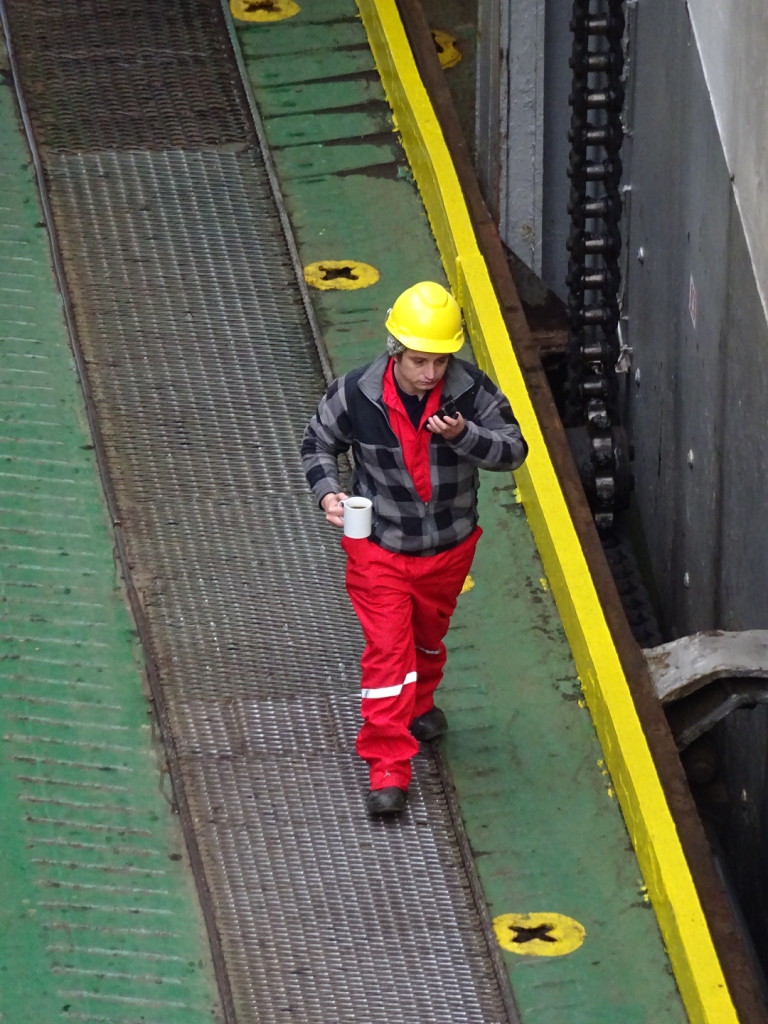 Worker helping load the vessel…and as any good Seattleite can tell you… you need a cuppa coffee to do a job right. 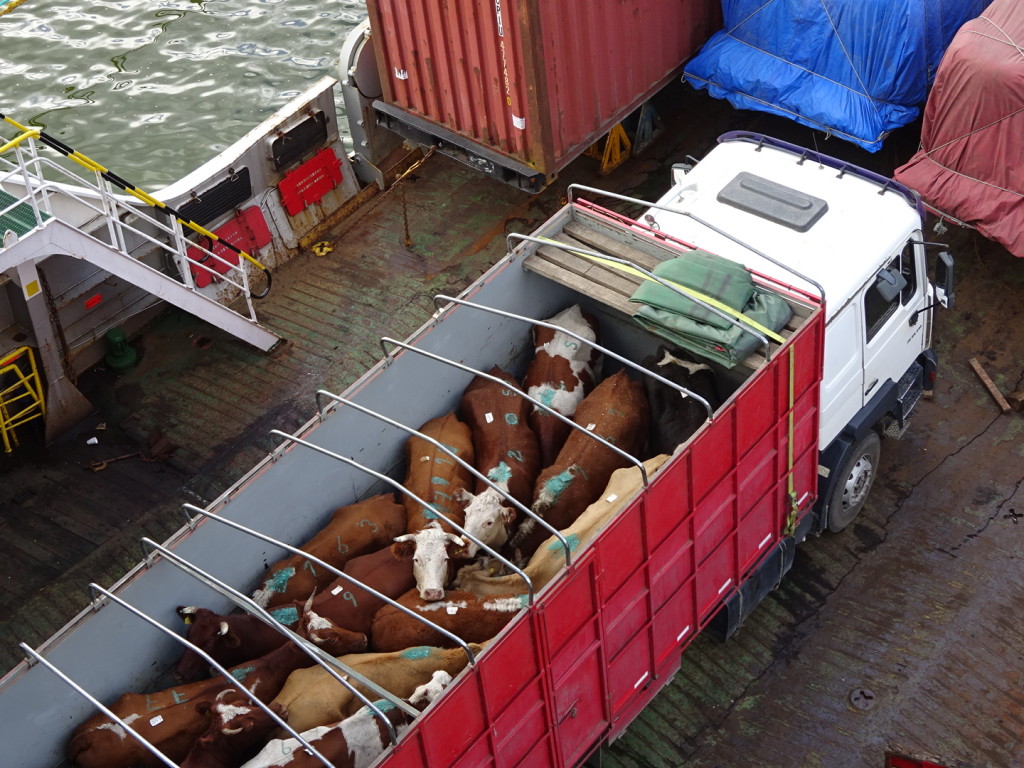 A couple of truck loads of cows also made the trip.

We boarded and picked our bunks. Dad would have fully approved of us getting the cheapest berth possible, and we did. The boat has capacity for a few hundred guests, but there were only 57 others sailing with us – love travelling in the shoulder/off season! Most of the bunks are in sets of four, but in the very back along the hull there was just one set of bunks and then a wall and a porthole. It was like having our own little mini-cabin. Perfect! 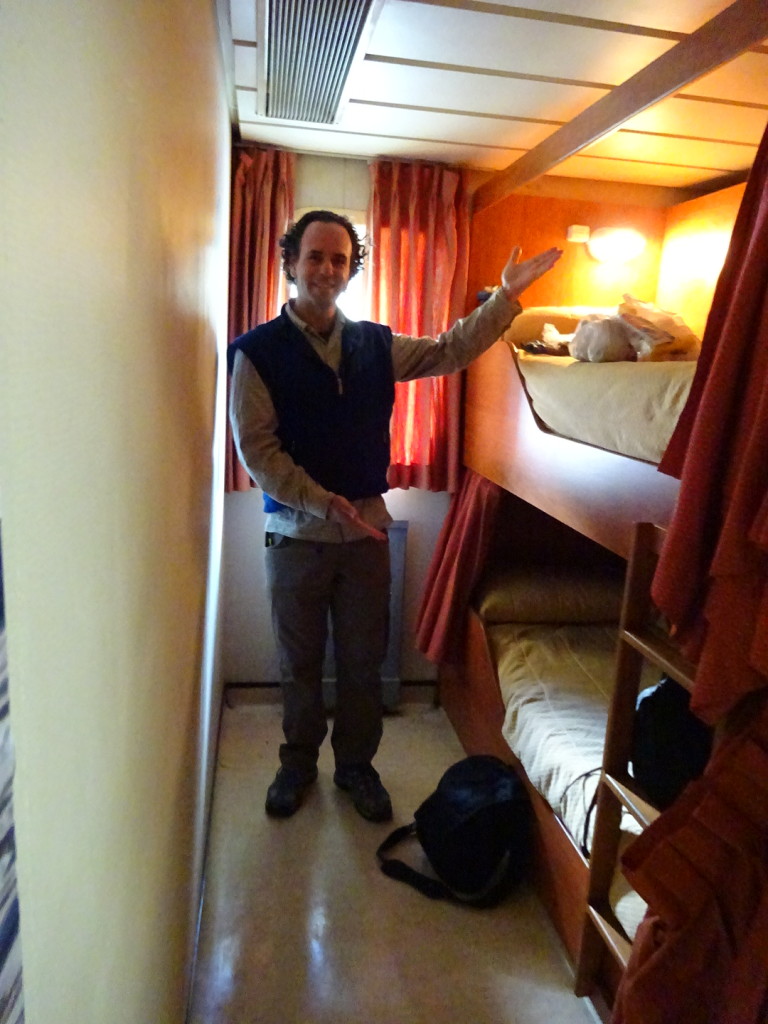 Check out our palacial berthing area! Our own little suite! Aaron stayed cocoooned in here until lunch time the next day…like a little kid in a fort. Ahhhhdorable.

We spent the next 24 hours playing games, reading, blogging and enjoying the views. The sun was out most of the time and it was perfectly comfortable on deck. We toured the bridge, which they allowed since there were so few us. Crazy how many of the dials and guages looked like they were from the ’50’s. Kind of reminded of us of the old NASA gear we saw when touring Cape Canaveral where they shot off the moon landings! 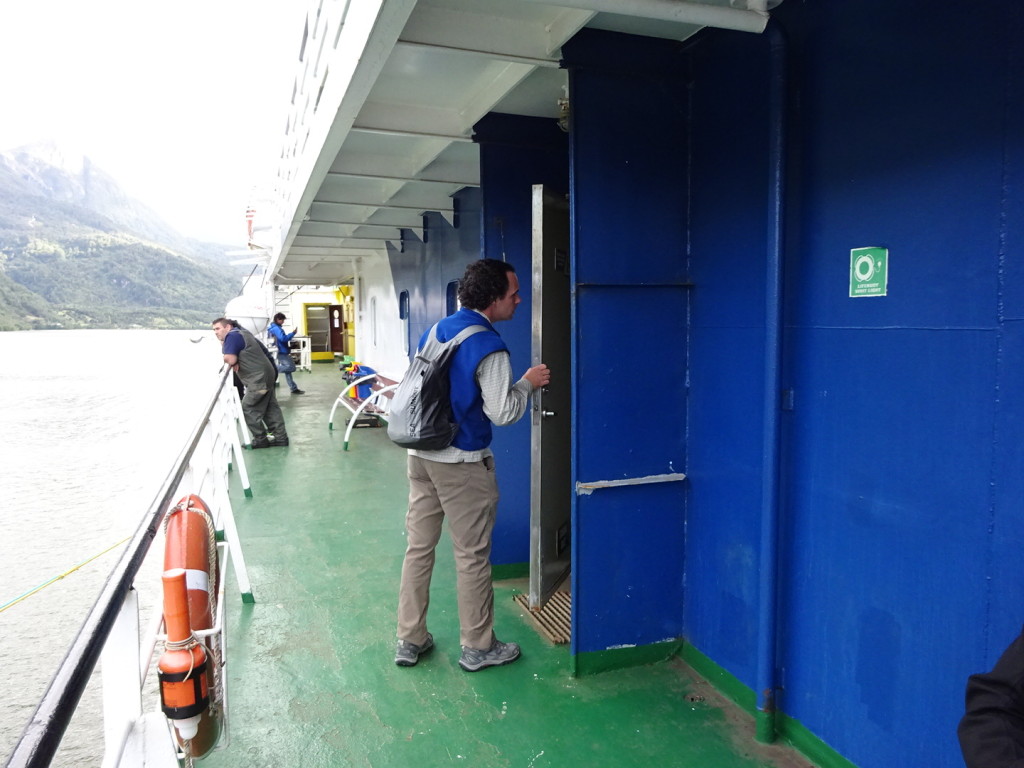 Aaron, always curious, checks out all his surrounds before we set sail. For the record, I love this about him. 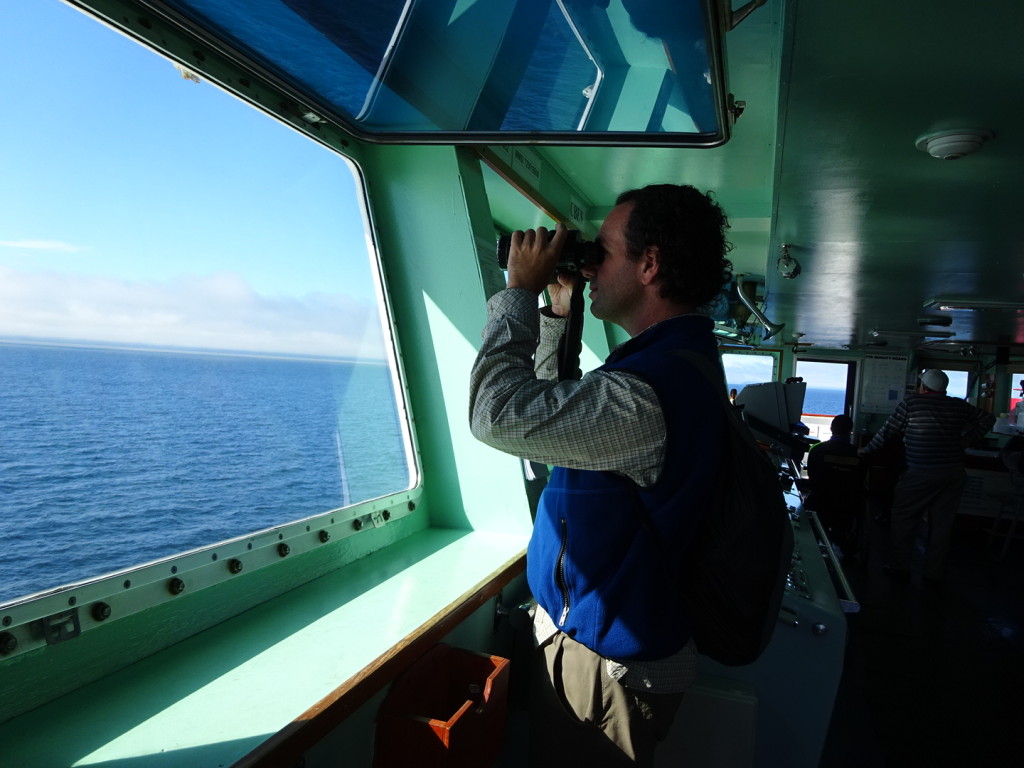 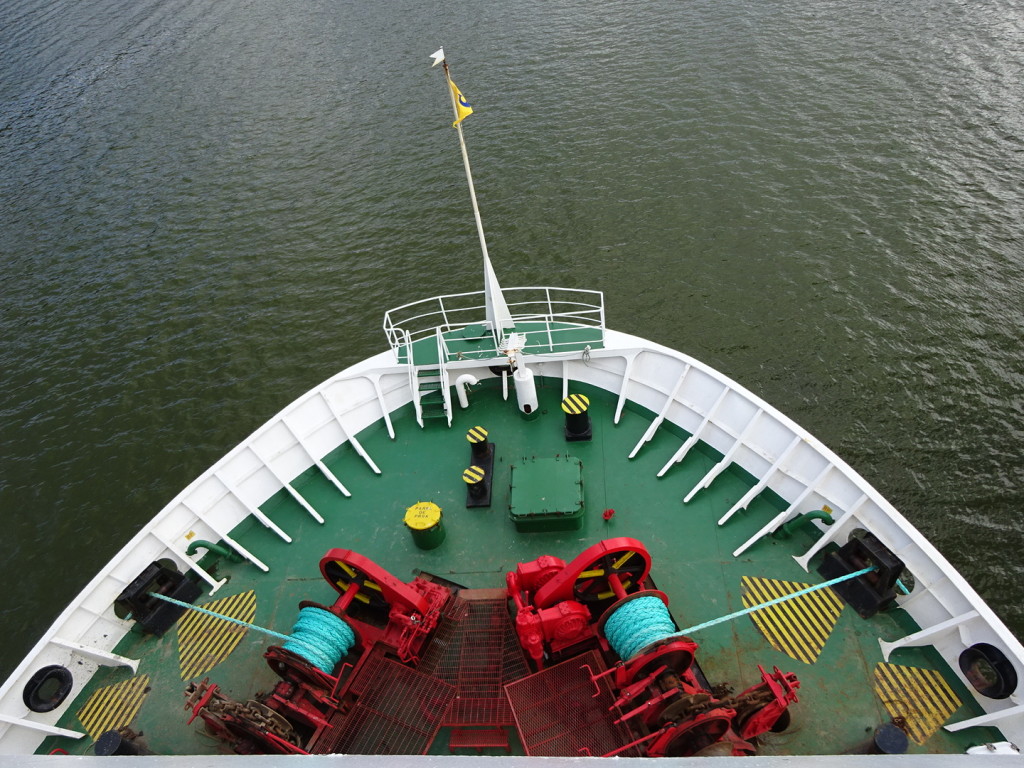 I’m flyyyyyyyying. From the Bow.

The cruise includes meals – galley style. Not gourmet and no choices – you just get what they hand you, but perfectly fine for this trip. We had a great time and declared it a perfectly civilized way to travel. At the same time we were glad to be on the shortest of the cruises – they do a 4 days cruise as well as our overnight. 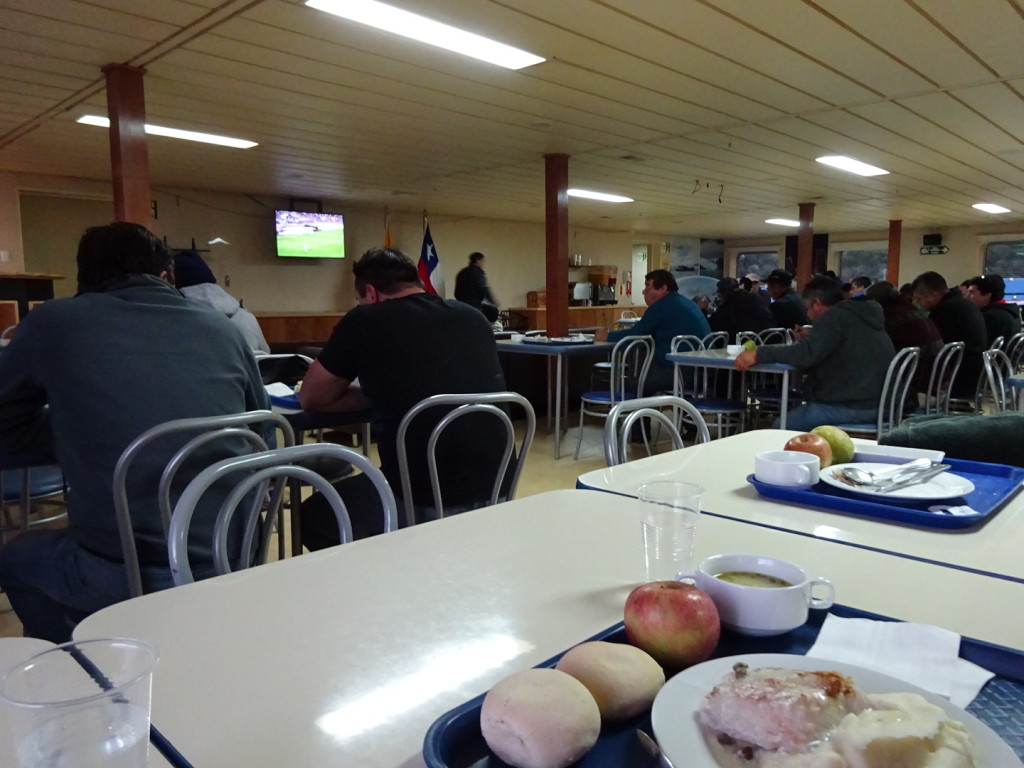 Dining Hall – see everyone is sitting in rows watching the futbol match!

I was surprised to see a sign onboard that seemed to indicate that while smoking and drugs are bad, drinking is good. In fact, as we explored the boat we happened upon the pub. After the safety briefing the interpreter specifically came to me and Aaron and asked if we had any questions. I asked if they served alcohol on board, which would have surprised me. Recently the answer would have been ‘yes’, but apparently they had three incidences in less than a year so decided to stop serving. Ahh, a three-strike rule before losing the booze – got it. The first situation was someone who got drunk and then, in an apparent suicide, threw himself overboard. Ugh! Okay, that’s bad. The second incident was a passenger from Saudi Arabia who got drunk, started shouting things to his mother – who wasn’t onboard – and then said the magic words, “Allahu Akbar” and ran and threw something down one of the pipes towards the engine turbines. It turned out to just be a shook-up can of beer. So, more funny than serious as he was just sad over a woman, but it opens up all the What-if questions. The final straw was when some hikers who drank too much decided to start their camp stoves and cook up a snack. According to the crew, the camp stove was fine (we give that a big eyebrow…really? Okay to just start the campstove?*), but the problem was when a mattress – who knows how – landed on the open flame and started a fire. Well. I guess if anything was going to stop beer and wine sales it would be an onboard fire. Fire is really the worst disaster for a ship as there’s simply no where to run to if you can’t contain it. The crew member also told us that they can’t refuse to serve people. Unlike in the US they can’t cut anyone off and it only takes one, I mean three, to ruin it for everyone. No worries, there’s an endless supply of Nescafe.

*What is with camp stoves anyway? I arrived at work one day a few years ago to find a few people had their camp stoves going in a conference room, making pancakes or something crazy like that. The “no camp stoves at work” email came out a few minutes later.

Inspite of the no alcohol sales, we were still joined by one very inebriated “driver”, that’s someone who drives a truck onto the ferry and rides with it to it’s destination and then drives the truck away. Apparently you can still bring alcohol on the ferry, you just can’t buy it there! Anyway, he just wanted to play Catan with us before he passed out. He didn’t speak English but was very friendly bringing us each a can of near beer (you read that right, near beer. Oy!) and trying not to mess up our cards too much. We were very happy when one of the senior guys from the crew called him over, spoke a few words (which I assume were something like “leave the nice tourists alone”) and then slapped him on the back. Thankfully we never saw him again. We left the fake beer on the table and noted they were gone by morning. 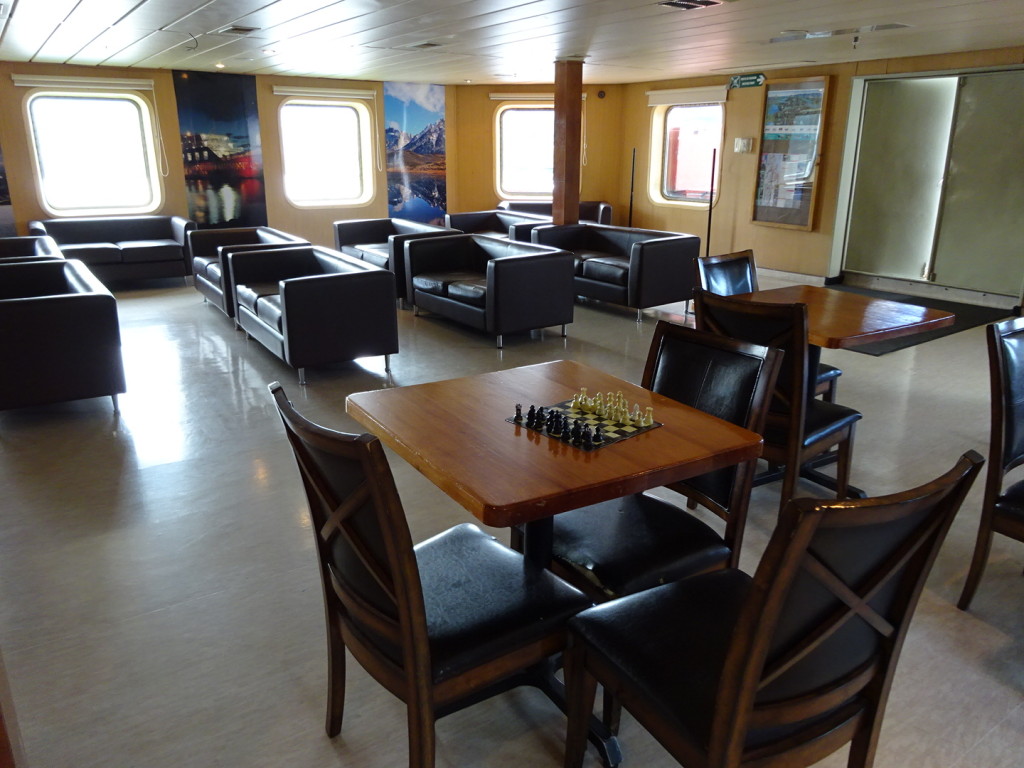 This is The Pub, where we played Catan the first night beside our uninvited guest. 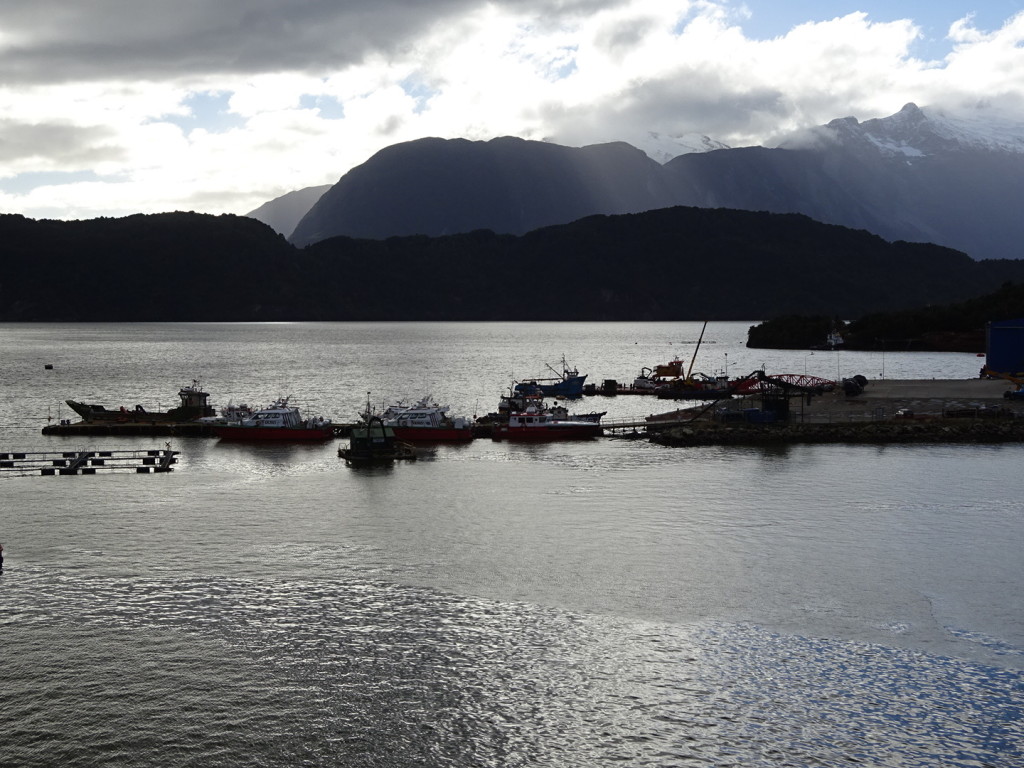 Just before we left port.

Arriving in Puerto Montt was exciting! The ferry docked at dusk and we learned that the last bus from Puerto Montt to Puerto Varas (where we had our AirBnB lodging booked) was in about an hour. They typically off-load the boat cargo-first and then the passengers, but they made an exception and let a few of us off early. We were sent down a back industrial (read: scary and tetanus inducing) staircase past the crew, ran ahead of the trucks coming off the boat and up to the road where we flagged down a bus that quickly filled up. Watching the time tick away as we slowly made our way to the bus terminal was maddening! Did there really need to be folks waving the bus down every quarter mile? Yikes! An older gentleman took pity on us and made it clear where we had to get off. I was about to hit the buzzer to stop the bus and he patted my hand and gave me the “not yet” sign. A minute later he gave me the look and I pushed the button. He actually got off the bus alongside us and walked us to the exact collectivo we needed and told the driver where we were headed. So grateful for the kindness and help, I gave him a hug…he gave me a peck on the cheek. Love travelling! 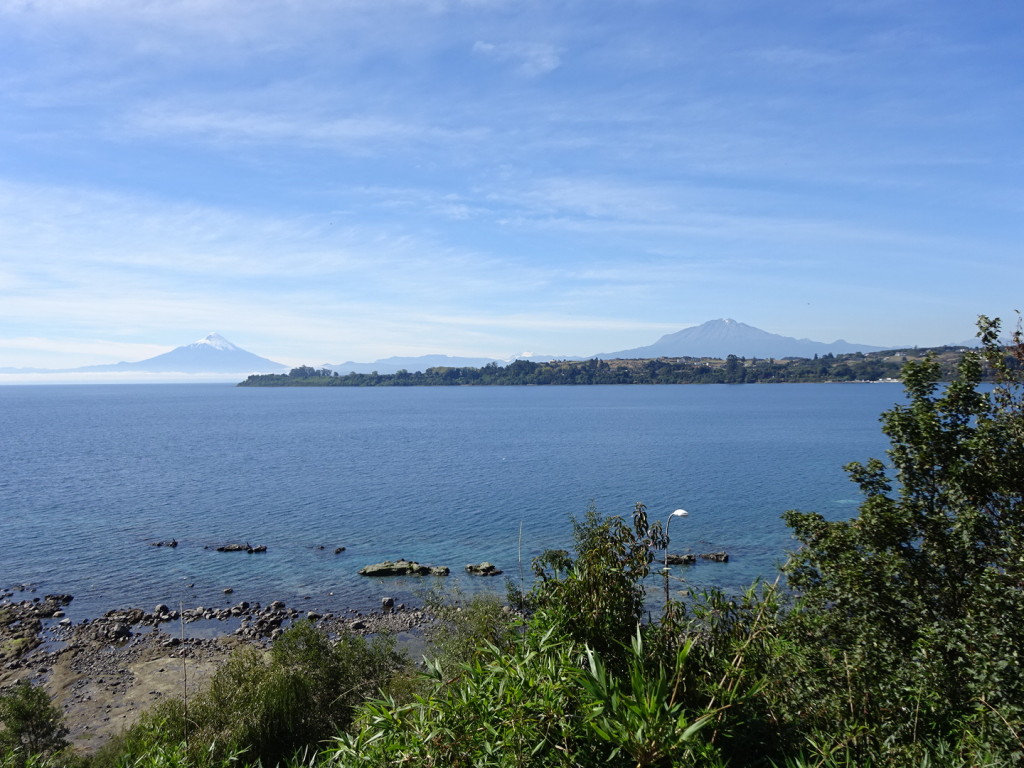 Gorgeous view over the harbor of Puerto Varas. The volcano on the right actually became active three weeks after we left!!!

Entering Puerto Varas, which doesn’t have it’s own bus terminal, our collectivo driver motioned at us for our stop and told us where to get a taxi to our hostal. Juan Pablo, our host at the Wool & Wood House, was waiting for us with – and I am not exaggerating – bonafide bear hugs! Like we were his long lost kids. He expected us hours earlier and had grown worried. When we got back online the first thing we saw was a message from Juan, “Where are you!?”.  We knew then that this was going to be a fabulous stop on our way north.

Next up – Meet Juan Pablo!

Us on the bridge!

« How to Explore Patagonia as a Softie – Part 2, Jorge The Terrible and Caves Galore
Darned Volcanic Eruption – hmmpphhh! »