How to Explore Patagonia as a Softie – Part 4, Meeting Juan Pablo

How to Explore Patagonia as a Softie – Part 4, Meeting Juan Pablo, The Best B&B Host on the Planet – Chile

(Wondering how we got this far? Check out Parts 1, 2 and 3 of our Patagonia adventures!)

As our final story about Patagonia, we just have to tell all the world about the best B&B Host, EVER! Okay, even one of the best humans ever! Welcome to the world of Juan Pablo! 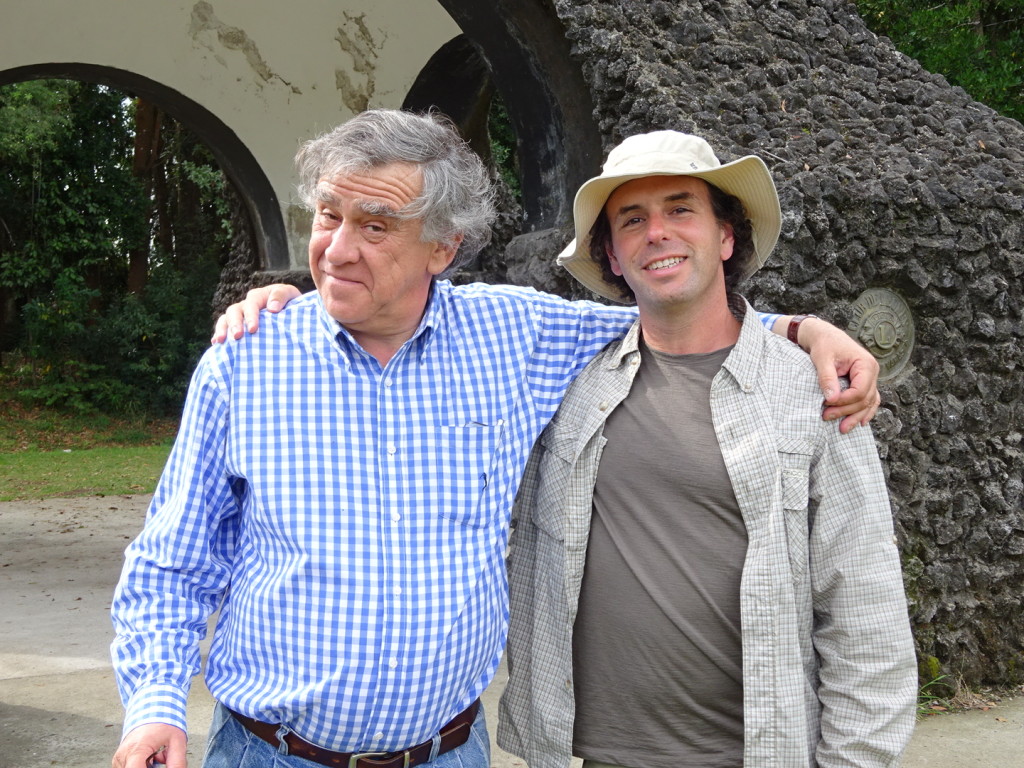 Juan Pablo and Aaron on one of our little tours.

We had the pleasure of staying with Juan Pablo at Wool and Wood in Puerto Varas. We originally booked two nights, then extended it to four and then five and on the last night I cried and begged Aaron to cancel the rest of the trip so we could live with Juan Pablo for the next eight months and maybe forever.

Simply said there is no nicer or more gracious host than Juan Pablo. 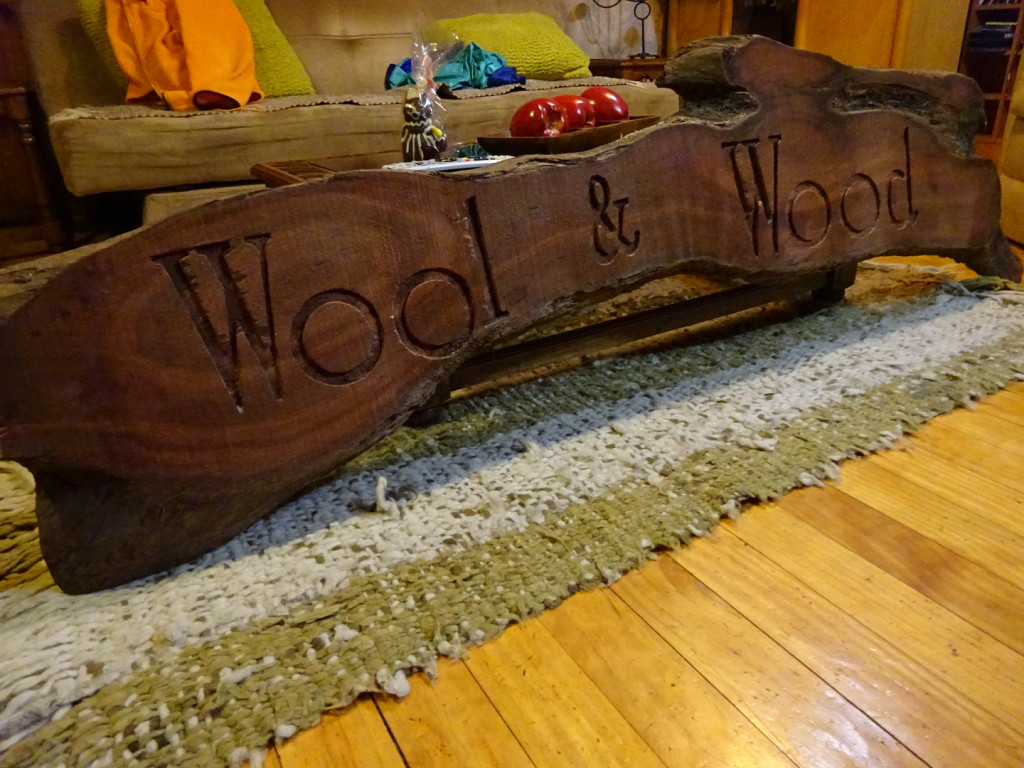 Not sure why the sign isn’t hung outside, but this is where we stayed.

Juan Pablo speaks as much English as I speak Spanish — so just a few words. It doesn’t matter because he makes everyone feel welcomed and a part of the family within seconds.  We arrived much later than expected on our first night and Juan Pablo was pacing in the driveway as we walked up in our backpacks. He yelled at the top of his lungs, “Aaaair-Rooooooan!” as if Aaron was his long lost friend. We walked through the gate into the type of bear-sized hug normally reserved for grandchildren. Just like that we were transformed from “guests” or “customers” into Family. Juan Pablo was the cool uncle (he’d say “grandfather”) we never knew we wanted but now can hardly live without. 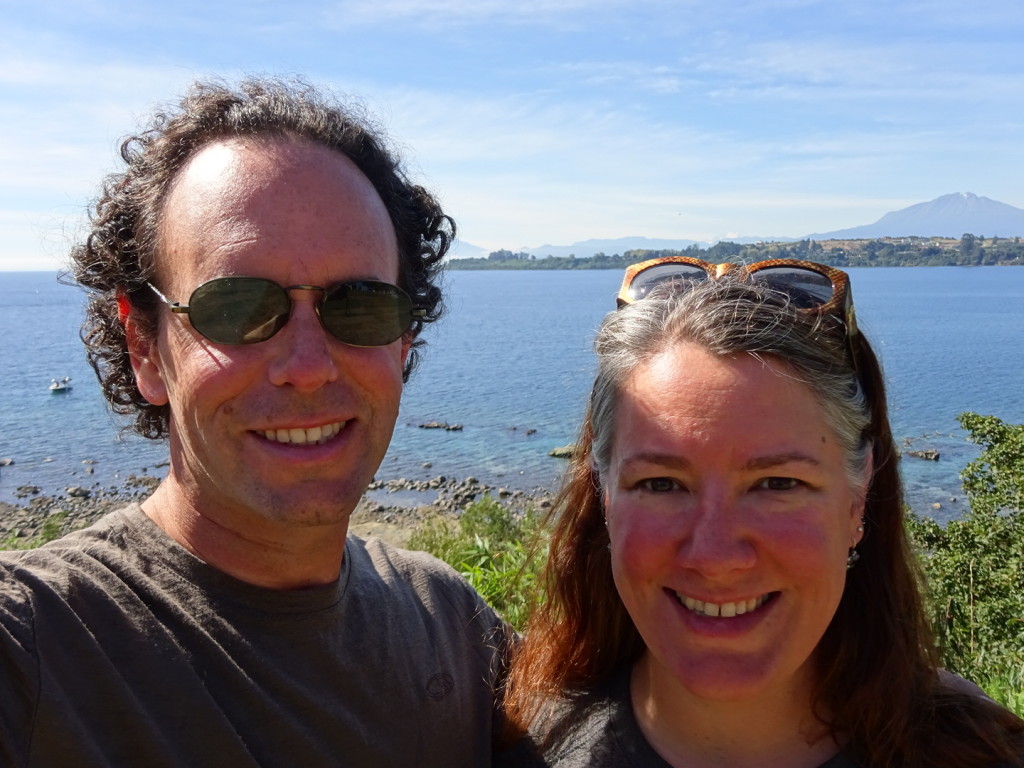 Walking by the water on Day One…the utter relief of being in a fabulous place is apparent, don’t you think?

JP ushered us into our room and made it clear using just a few words and big gestures that we needed to come back out so we could meet our new soon-to-be-friends: the Moens and Manuel. After all staying up late talking and laughing and getting to know each other, Juan Pablo asked what time we wanted breakfast. In the few places we’ve stayed that offer breakfast they always tell you what time it is – usually far too early for the likes of us. I sheepishly suggested 10:00am and was thrilled when everyone, including Juan Pablo agreed.

First dinner together. Not a perfect photo, but a perfectly fun time.

Breakfast was an amazing spread – which is also unheard of in these parts: warm bread, homemade (yes, homemade!) jelly, fresh fruit, cheese, ham, coffee, tea, yogurt….it never stopped. Hours later we waddled away to start our day. The bigger surprise though was that he made us two – count ’em TWO dinners while we were there, including wine and pisco sours! His cooking had all the hallmarks and love of down home goodness that rivals my mom. It was crazy-delicious and everyone packed into the dining room while Juan Pablo – a former DJ, had Lionel Richie crooning in the background. (South America LOVES the 80’s…but that’s another blog.) The long-term guests staying there – a couple of young people working in town – would join us occasionally, and sometimes someone new would just show up and join in the fun. Once you have been to Juan Pablo’s you are always welcomed back. 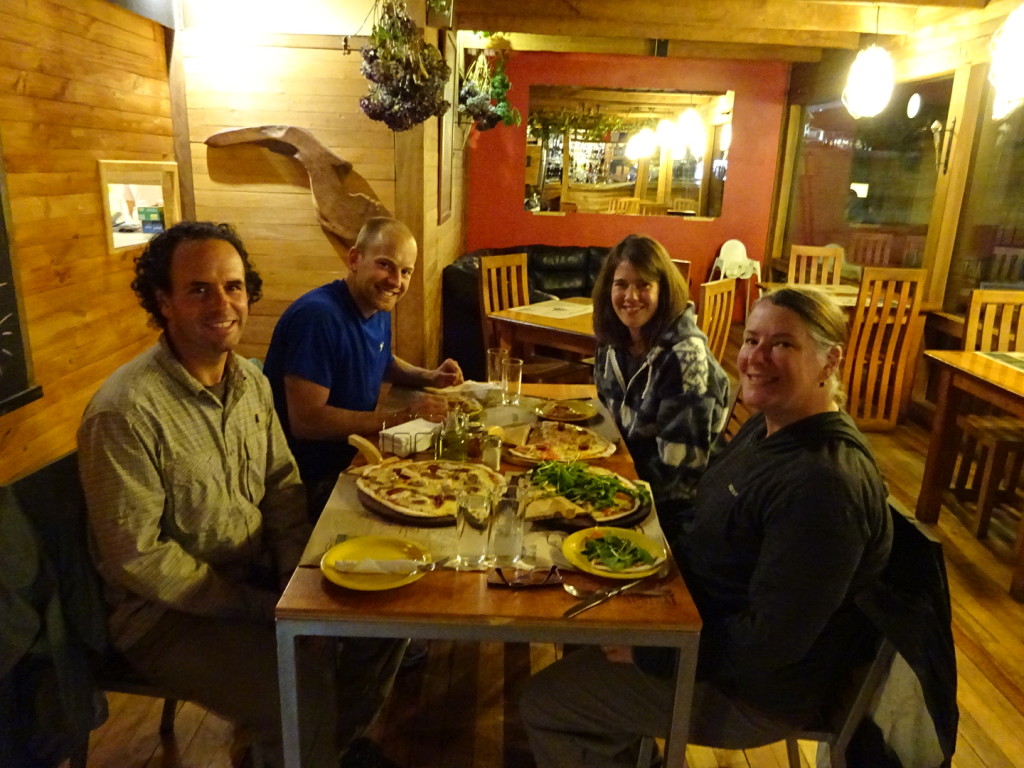 Out for dinner with our new pals the Moens. We joined them again in Buenos Aires a couple of weeks later.

Taylor and TJ Moen are an awesome young couple taking a big trip before grad-school. They grew up in the Midwest, lived in CA and are moving to Boston for school – we had a lot in common and tons to talk about. We loved spending every morning and evening with them. After every meal we all did the only decent thing you would do if you’re from the heartland or down south:  we stacked the dishes and attempted to take them to the kitchen with every intention of washing them up, but Juan Pablo would shout your name in his long drawn out way, “Taaaaaaaaay-Looooooooor! That’s MY job.” (He loved saying Taylor’s name.) And trust me when I say he did not like it one bit if you so much as lifted a finger. Secretly, when Juan Pablo wasn’t looking, we’d rinse the dishes so at least they were easier to wash. And twice I made a cup of tea without getting caught. I felt just a touch guilty, though, as the last thing you would ever want to do is disappoint Juan Pablo.

Manuel is around our age and on a long trip throughout South America. With homes in LA and Brazil and speaking five languages, he is both well traveled and well rounded. We liked him instantly. He showed us a brochure from a recent art show he had seen in a different town and imagine our excitement when we found another show from the same artist right there in Puerto Varas? I looked in the window – “Hey! That’s the show Manuel told us about!” and just like that we HAD to go! Read all about it here. 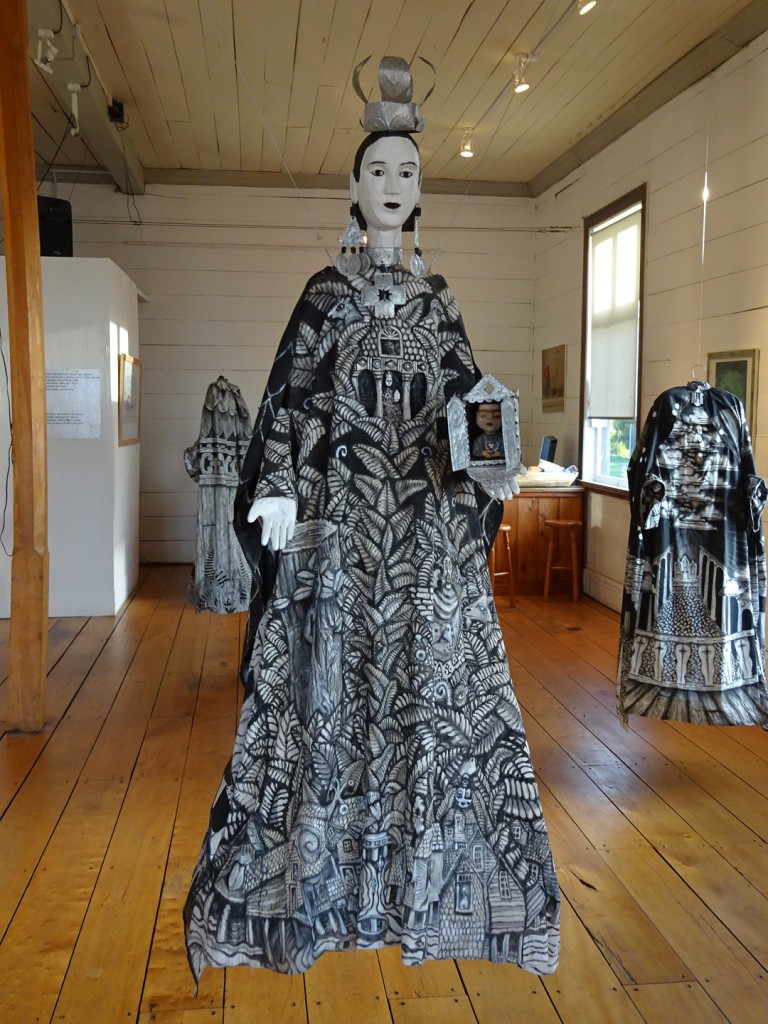 This lovely lady welcomed us to the exhibit!

Learning that Aaron likes creating art with wood, Juan Pablo piled us all into his sedan; Manuel in front to chat with Juan Pablo and the rest of us in back with Taylor squished in on top of TJ. Telling us we were headed to a town named for the wood they worked there, we zoomed off to Alerce, which turns out to be a type of cypress. Gorgeous red colors. We went to three different workshops/galleries before heading home – so nice! Juan Pablo constantly offered to drive us to/from town, always asked what we had planned for the day and when we would be back. He suggested ideas, told us to be careful, and would worry if we were late. 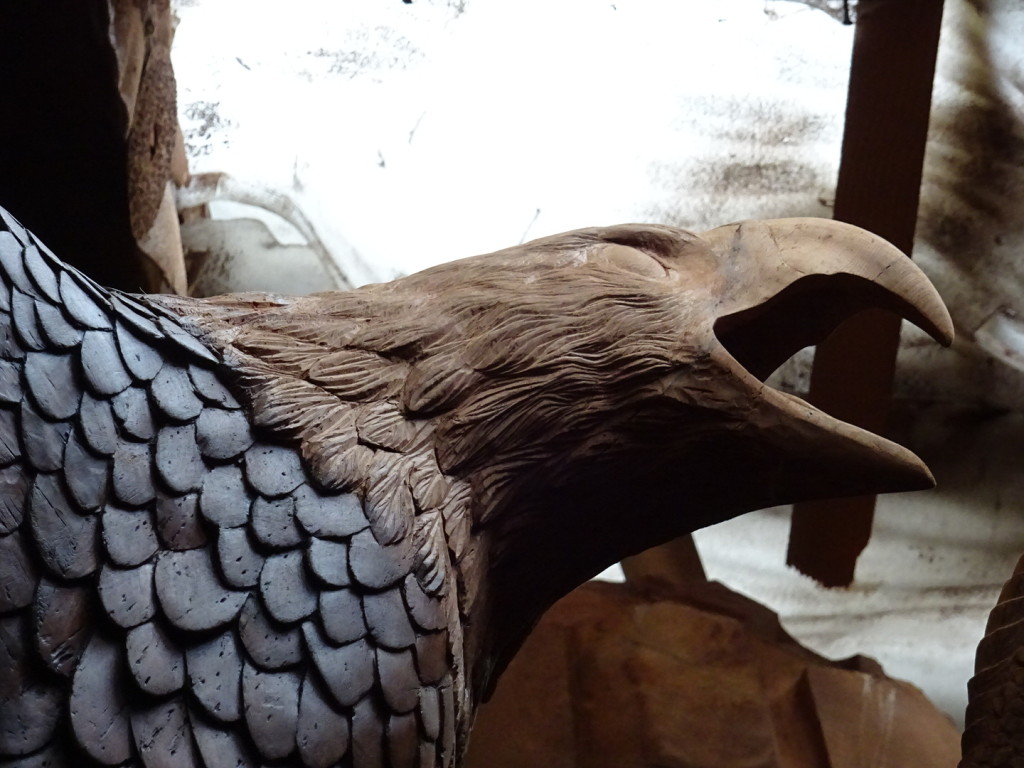 Cool wood eagle sculpture in progress in a local woodshop. 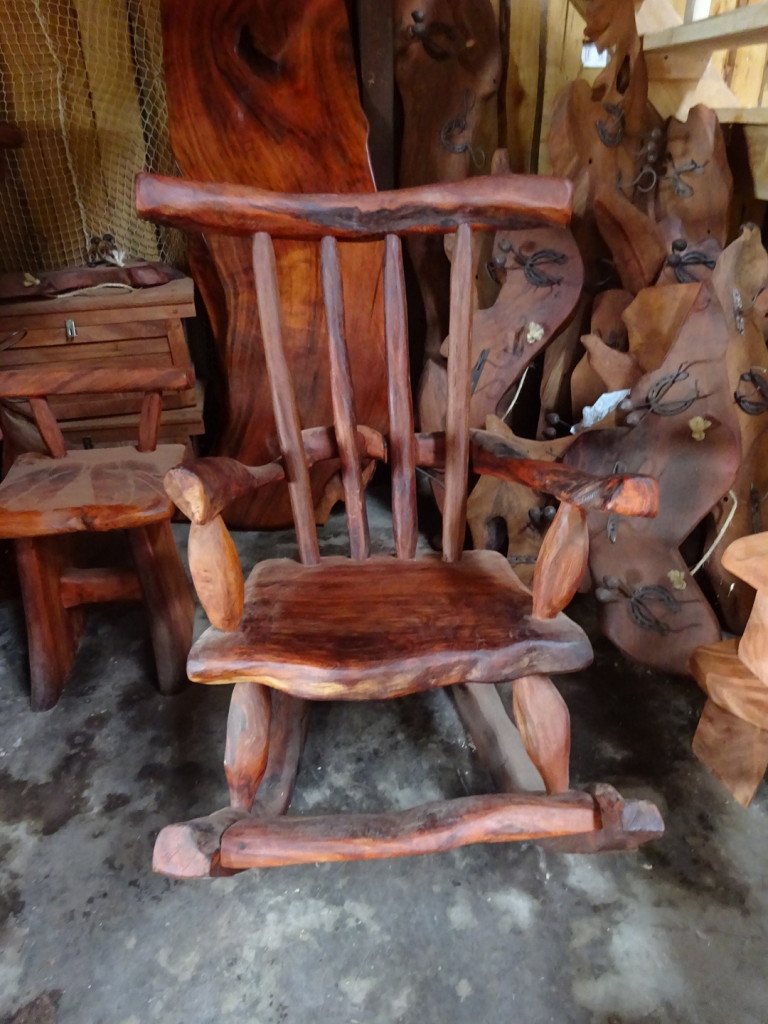 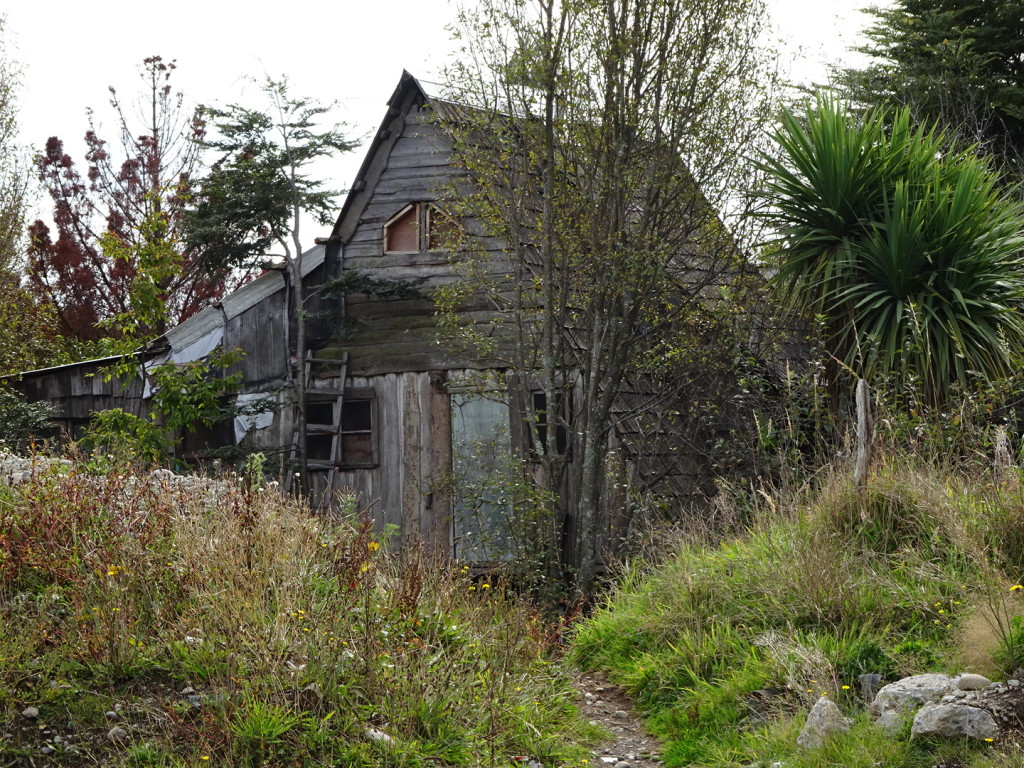 This gem was on the way to Alerce. We only saw it because Juan Pablo took us for a surprise drive.

We bought ice cream and a few slices of different cakes for dessert following one of JP’s magnificent dinners. Juan Pablo said he wasn’t into dessert… I can report that would not be 100% accurate! How can you not be into dessert, anyway? Aaron and I just don’t understand such things. Anyway, we all shared the ice cream after dinner, but were too full to take on the cake. In the morning, though, Aaron noticed before breakfast that perhaps, eh hem, a little bird had a nibble of the cake. Juan Pablo said he just had a little tiny bite and that it was really good. With that, he put out a platter of cake for us to eat with our already humoungus breakfast. Really, how much better could it get? 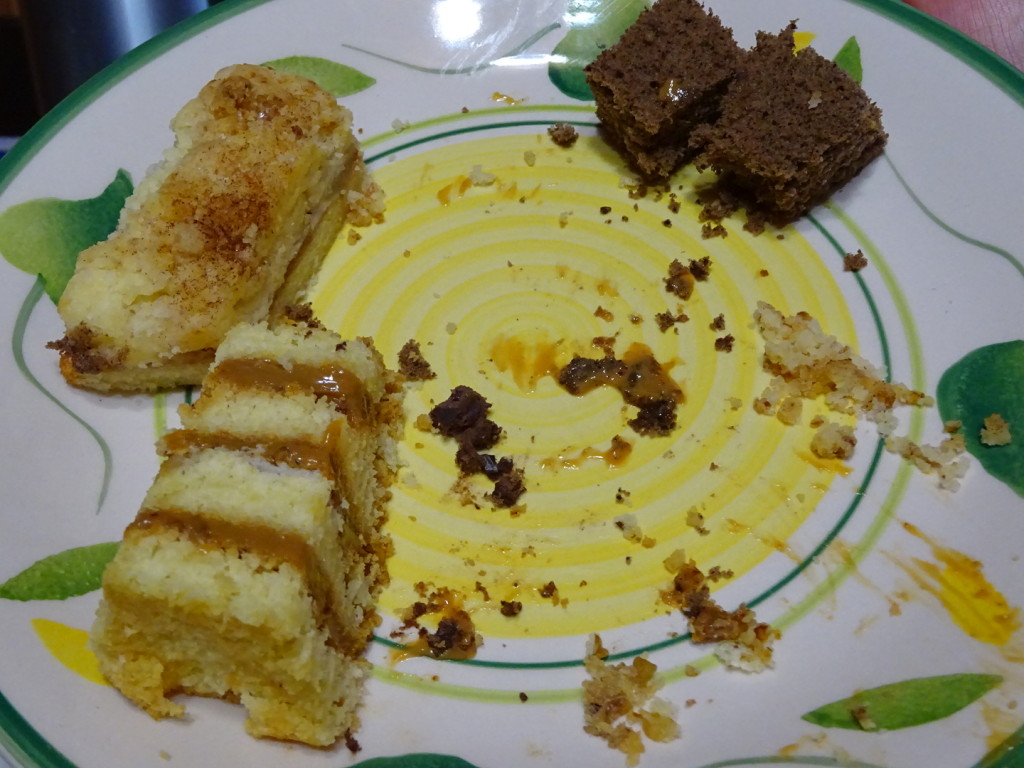 Yes, you’ve seen this picture before in a dessert post, but it was so good it appears again.

Between all the delicious meals and snacks (yes, he also made us snacks!) and great big belly laughs — Juan Pablo’s laugh is not to be missed – we toured around town. The Moens and Manuel would visit neighboring towns and do things like rapelling down waterfalls – Aaron and I stayed local with quiet walks in this resort town. After hustling around Patagonia for three weeks, we were more than ready for a sit-down. We sat on the lake shores and patted the stray dog that lay down at our feet. We ate bad chocolate (so sad), but were persistent and found a different store with much tastier chocolate. We found the art. There were good intentions to get some blogging done, but you can’t blog and belly laugh at the same time so we picked laughing. We can’t tell you so much about Puerto Varas, except to say that if you go – you HAVE to stay with Juan Pablo.

The volcano! Couldn’t see it most days so this was a lucky shot. The one on the right, Calbuco, erupted 3 weeks later! 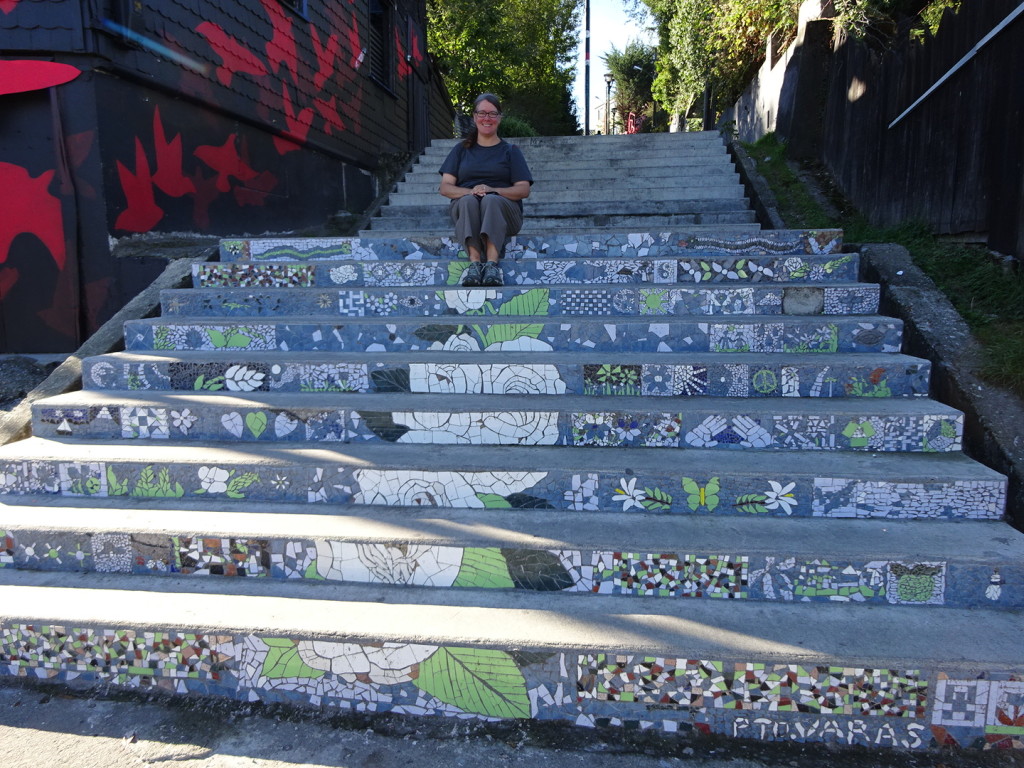 Art in all sorts of random places around town was really fun to see. 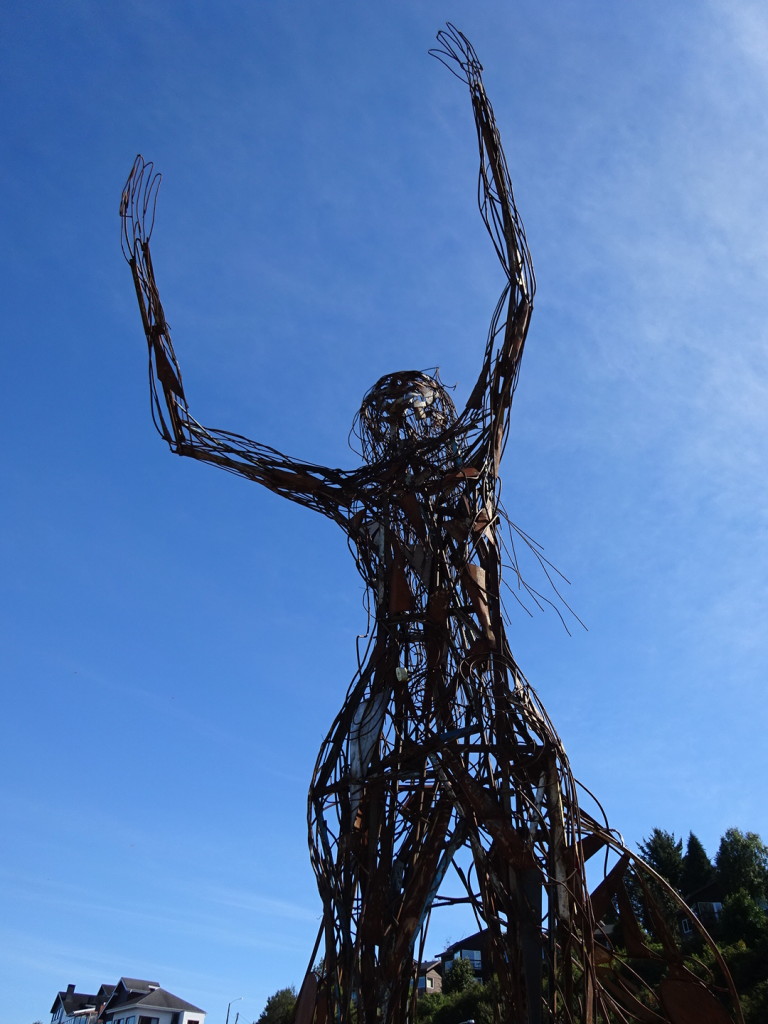 This sculpture overlooked the water like the rest of us.

Manuel became our group interpreter – translating our stories to Juan Pablo and his back to us. That’s how we learned that Juan Pablo worked for decades in music clubs and was the youngest of something like 11 kids (all due to his parents not having a TV, JP said – hah!). He had only taken over the B&B about six months ago. You wouldn’t know it because he’s a pro. I kept asking Juan Pablo questions like – “Did you work in hospitality?….How did you learn to cook?…Have you thrown a lot of parties?” but it seems that it just comes naturally. Best I can figure he just treats all of us the way he wants to be treated. After repeatedly extending his stay, Manuel eventually left us. We rode with him to the bus station and said our good-byes and missed him on the quieter ride home. Aaron would now be chief interpreter. From here on out, questions would only be asked in present tense.

On our last night, the Moens, us and Juan Pablo went out for another dinner together and afterwards JP drove us – at 11:00pm – to the bus. We all waited in the car, trying to not think too much about leaving, until the bus turned the corner and we all poured out of the car without making eye contact. Juan Pablo wouldn’t let me carry our luggage and hauled it to the bus, said a few things to the driver and his assistant, and stowed it away. Then, before we had a chance to say our goodbyes, Juan Pablo had boarded the bus and started talking to the other passengers as he led us to our seats! For a second I hoped he’d come with us…but I guess that wouldn’t have been very nice – leaving the Moens at the side of the road. We gave JP a few good hugs and looked away as he headed back out to the car. 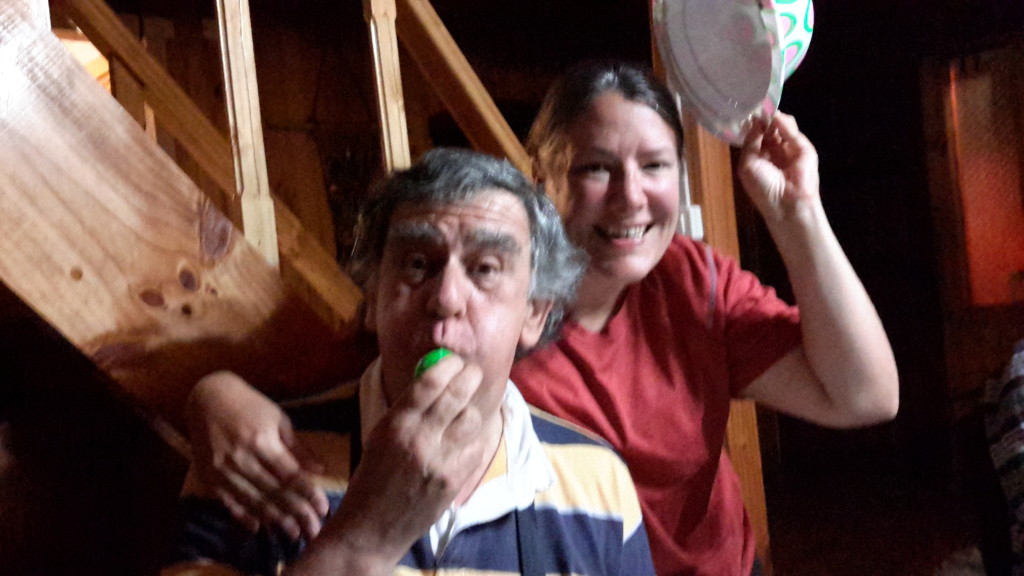 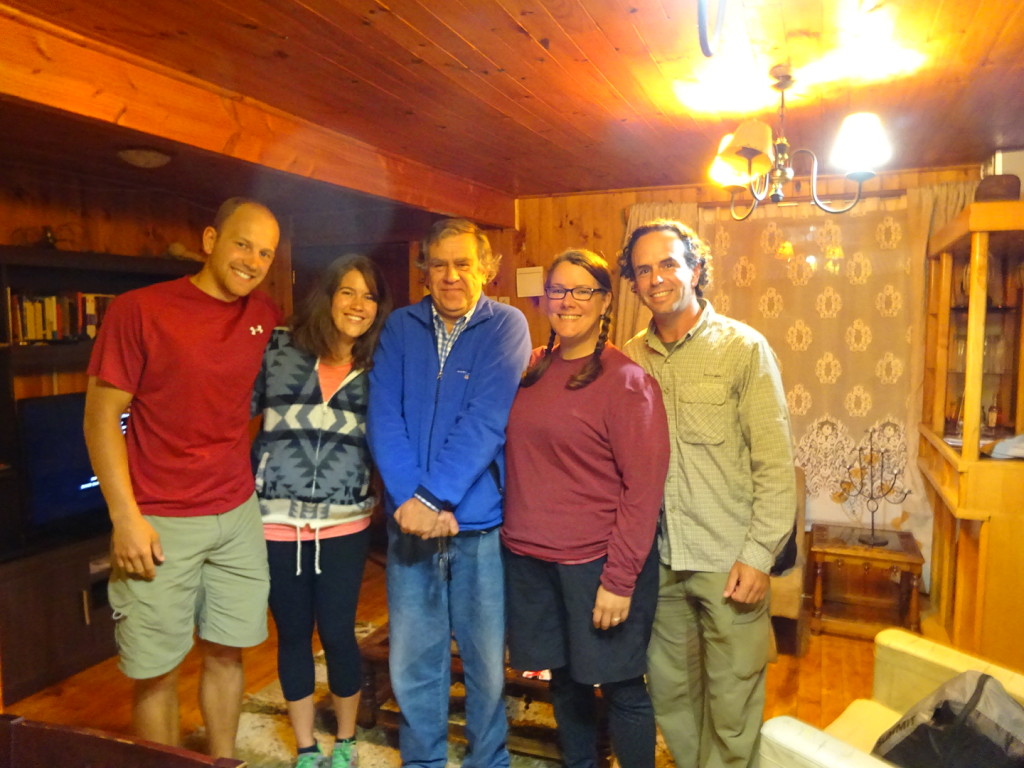 Our final night with the Moens and Juan Pablo.

I doubt we could ever have such a wonderful host again.

The next day we made dinner in our private little room in Santiago: Cup-o-Soup and a couple oranges we had to peel ourselves. It’s rough on the outside. Once you’ve lived in the five star luxury of Juan Pablo’s, it’s hard to go back! Thanks Juan Pablo – we won’t forget you!