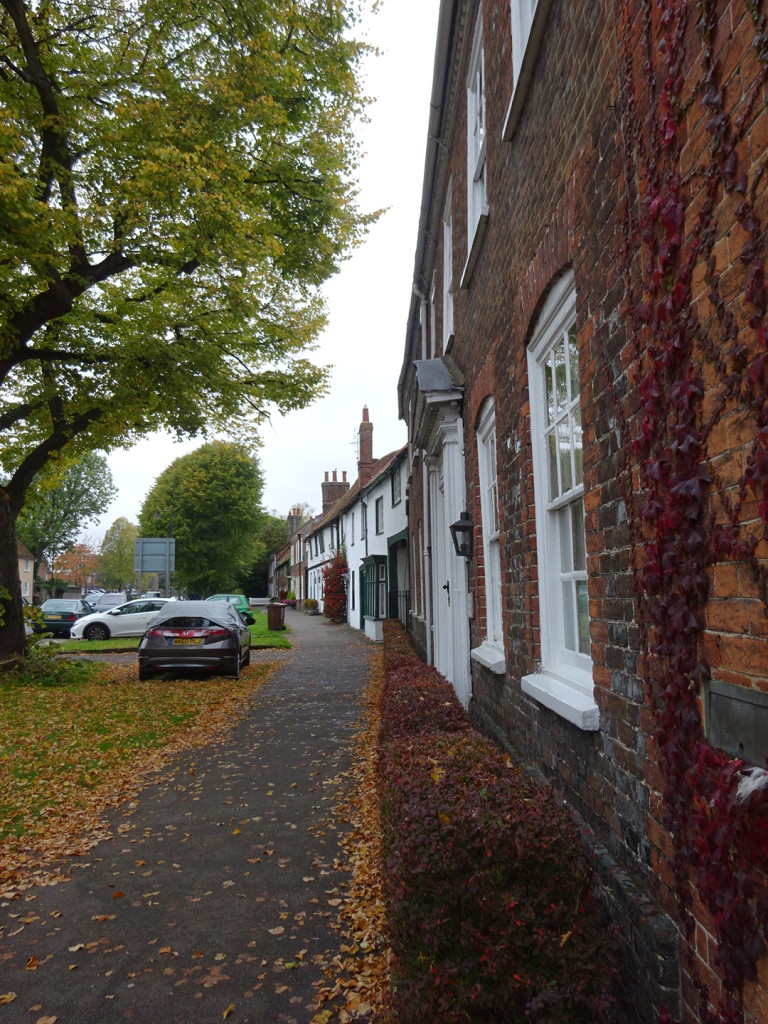 Ahhh, the gorgeous English village of Wendover in the fall.

Our final stop before heading to Ireland was Wendover; an authentic, rural, English village. There we would pet-sit for Looby, Maddie, Tom & Jerry for about a week while getting a taste of local life. The pets were all pretty much angels. Maddie was described as “soft as butter” and it could not have been more apropos. Many-a-night while preparing dinner I’d say, “I feel a puppy on my toes”. Sounds like a children’s book refrain, but juuuuuust touching my toes is where Maddie liked to be. 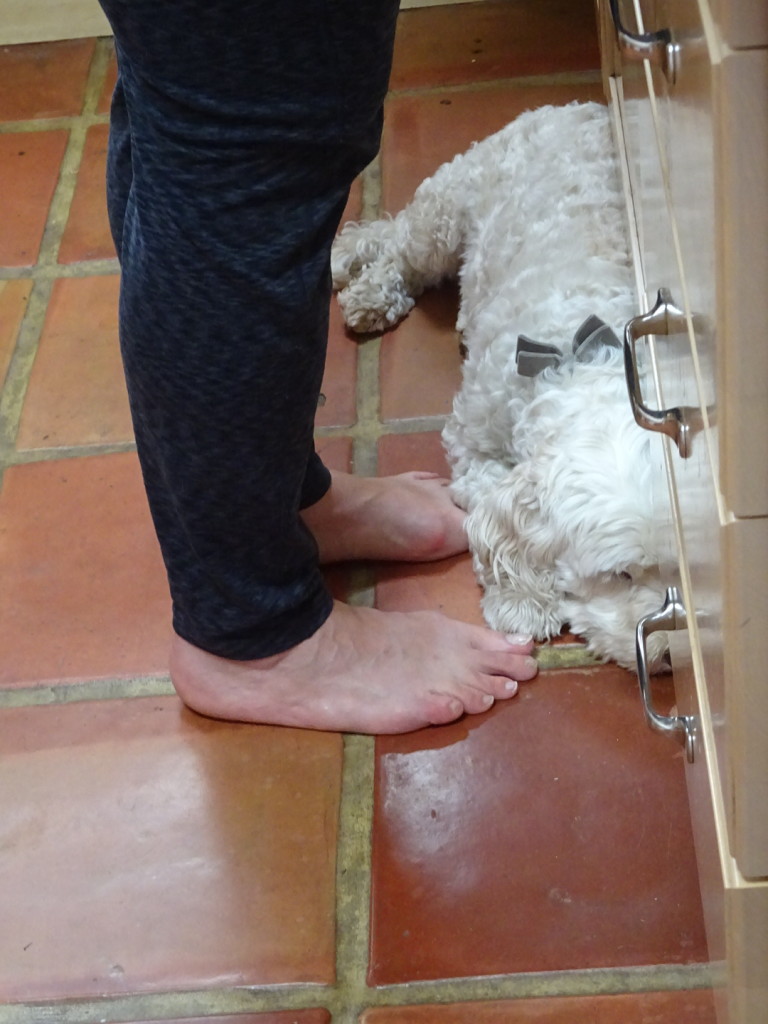 Looby was older and wiser and had mad ball-agility skills. She could dribble the basket ball from one end of the yard to the other. 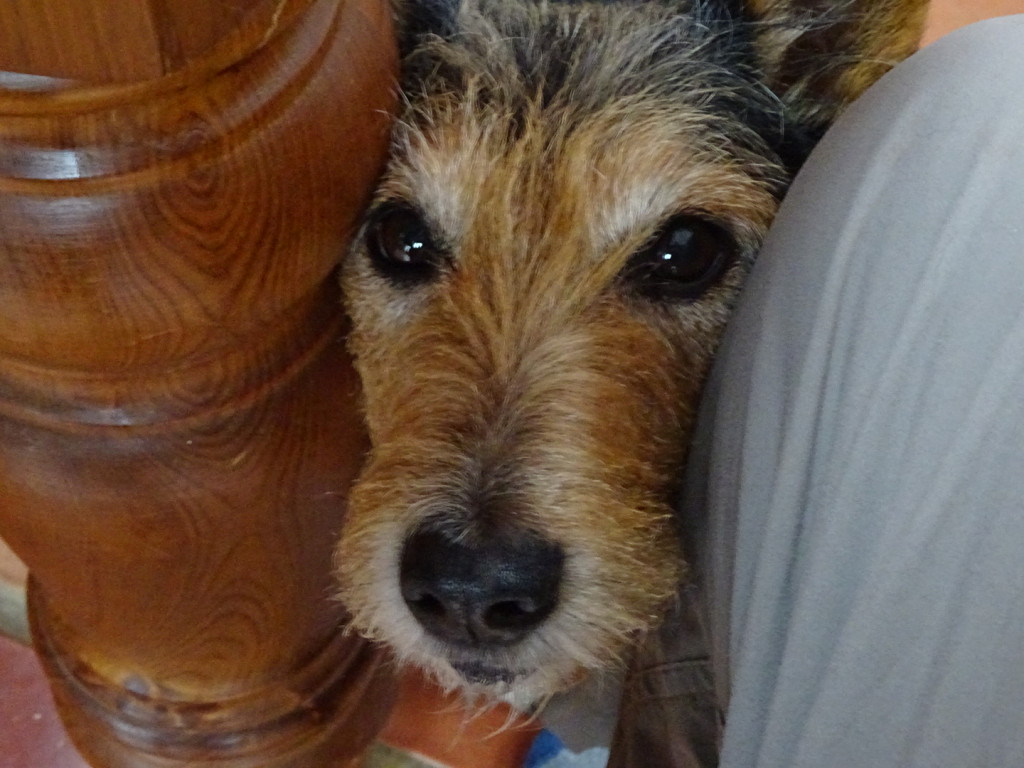 Both were completely endearing. Everyday before lunch we’d leash up the pups and head out for a constitutional through the surrounding sheep fields. We were blown away that people could just walk through the local lands. Apparently the walking rights date back hundreds of years and the courts continuously uphold the public footpath rights. We heard it rumored that Madonna tried to limit the walkers passing through her property, but the judge sided with the public paths. If you tried walking through someone’s field in the US, I’d be worried you’d be met with a gun! Not in England, though, so we took Maddie and Looby out to the fields every day. Maddie could go off leash and just run and run and bound and run and leap and run as much as she wanted. Looby had to stay more under control, but she’s older and walking on the lead seemed to be fine by her. Sometimes, though, we’d run about ten feet with her and she seemed to like to run juuust about that far. Now that’s our kind of level of effort. 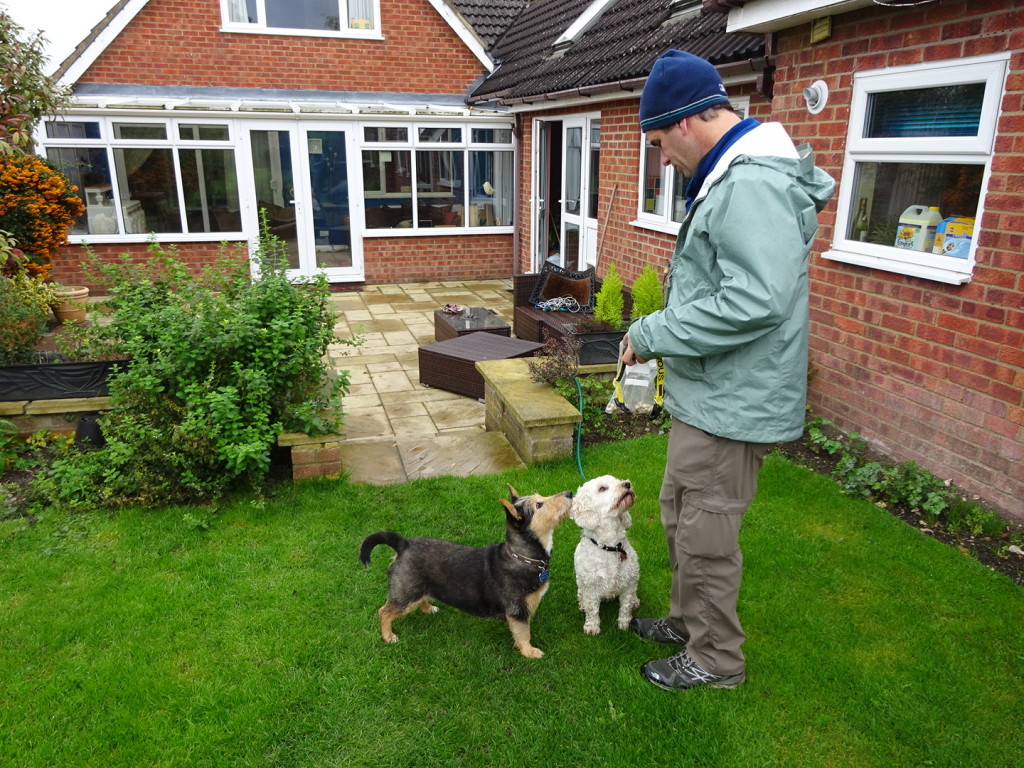 Play with me. No play with ME! 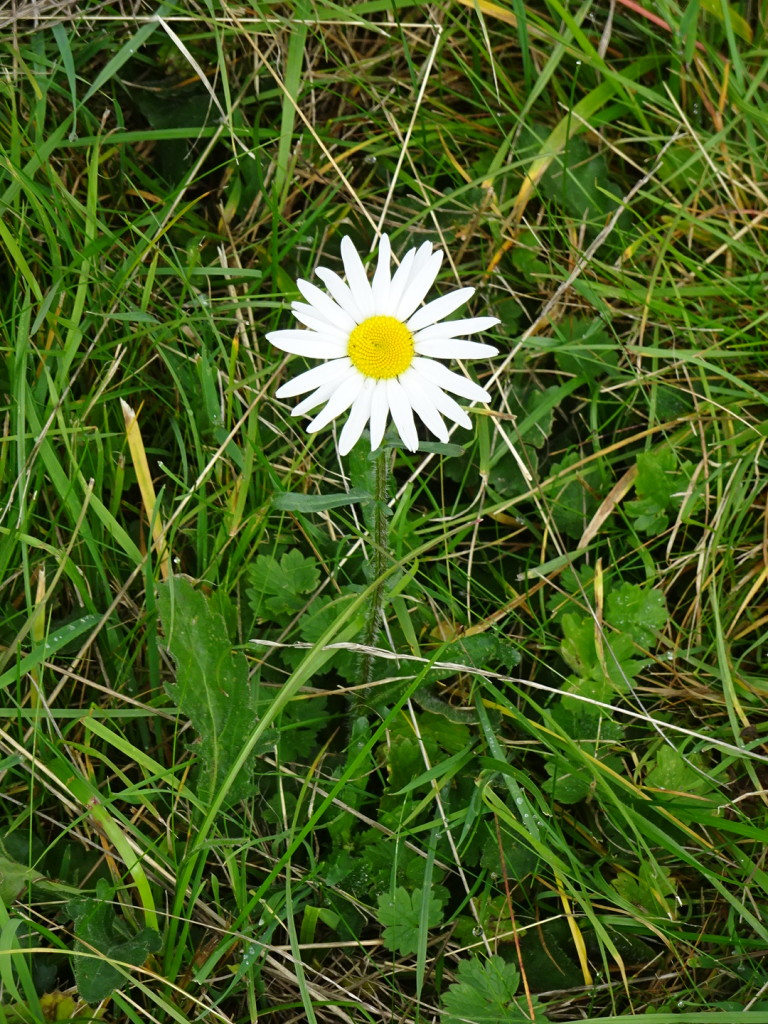 A lone daisy in a sheep field awaited us one morning.

Tom and Jerry were a pair of beautiful Bengal cats. We’d never seen ones patterned like T&J – just gorgeous! They were a bit skittish, though, so we didn’t make quite the connection we did with the pups.

On our walks with the pups, the scenery was straight off a jigsaw puzzle. Autumn colors, green fields, and sheep galore! Hawks soared overhead most days. Squirrels collected nuts while Maddie attempted to collect squirrels. I mean you can not make up this kind of bucolic scene! 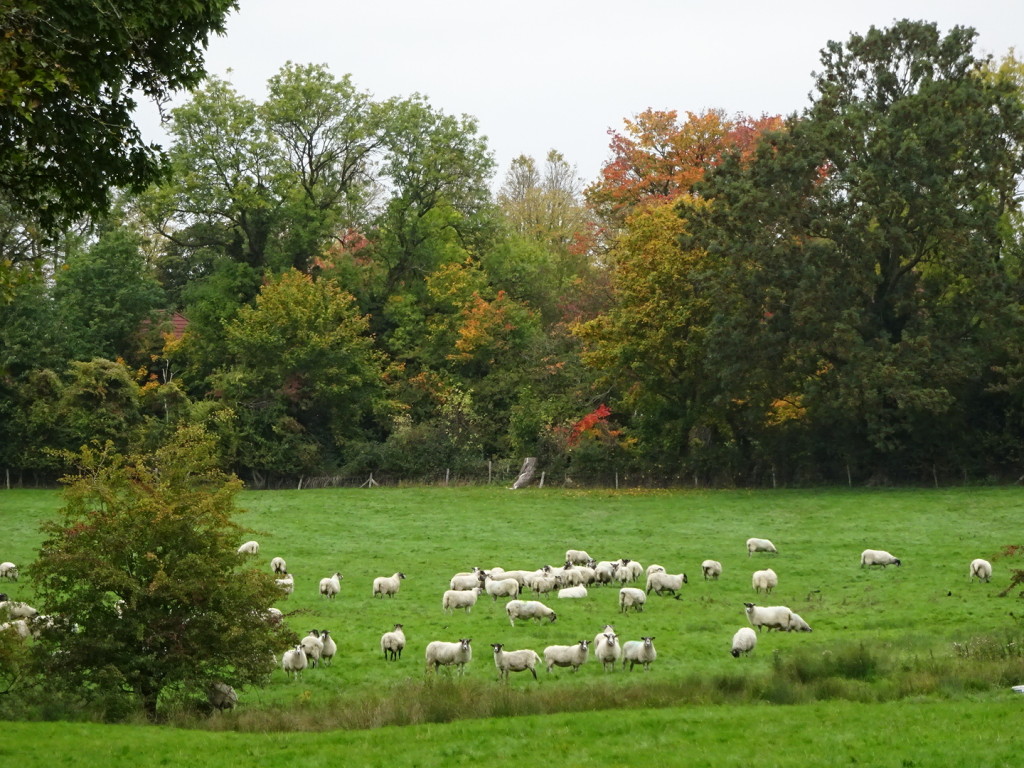 Baaaaaah. Every photo a jigsaw puzzle. 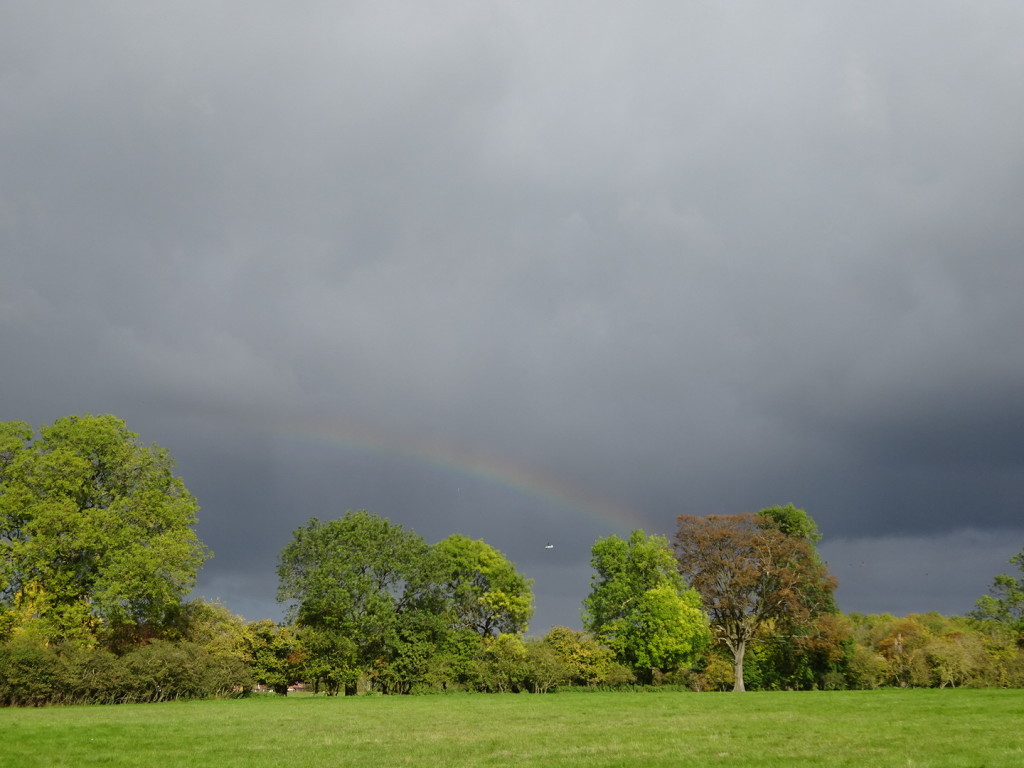 The view on one of our walkies.

The village was just a 15 minute stroll from home. We’d pass English gardens, children in strollers, well behaved dogs on leashes and old people in scooters (practically scooting hand-in-hand…just the sweetest ever) along our way. The town had multiple pubs, second-hand stores, a little museum, play fields, schools, and a grocery store. 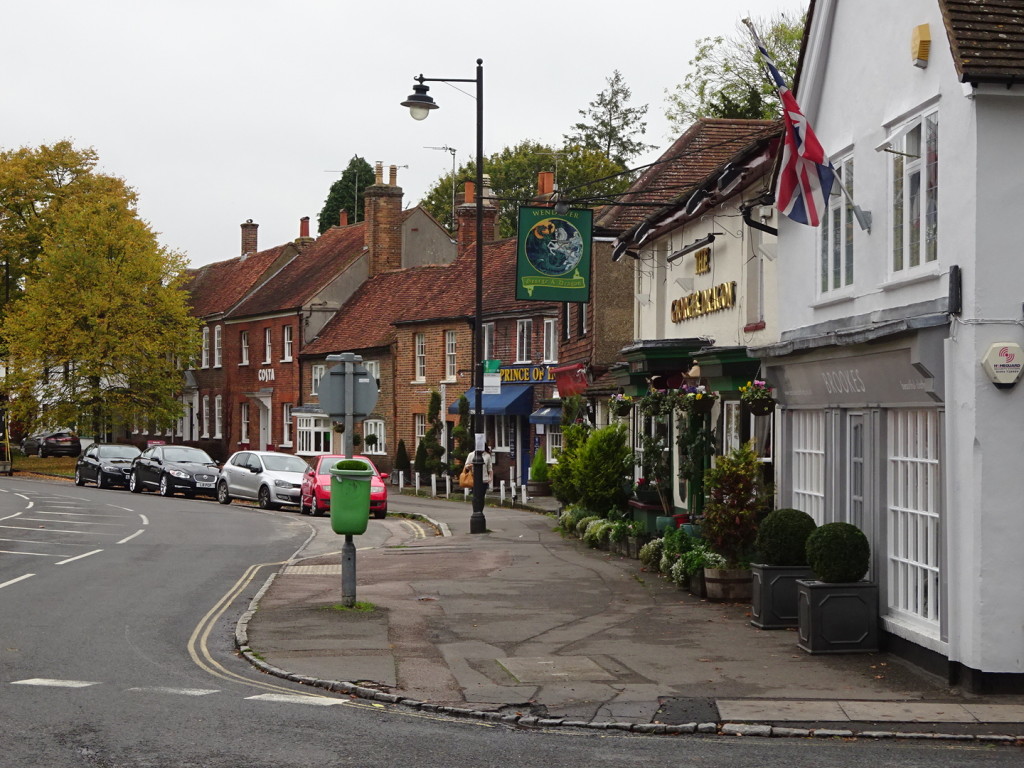 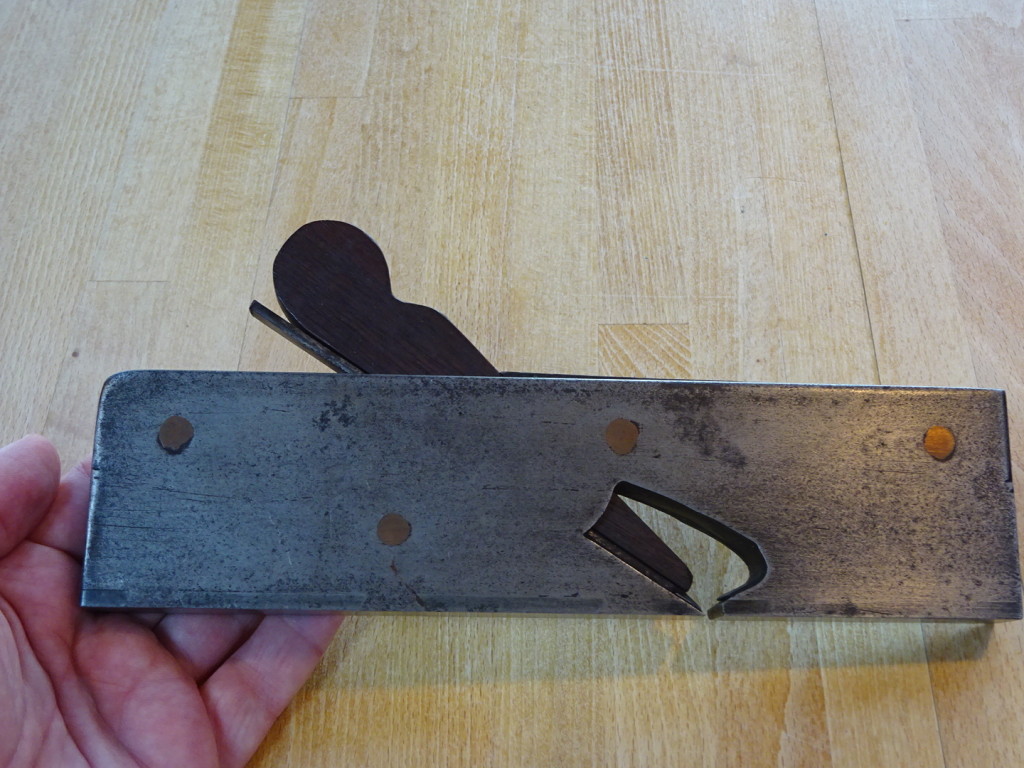 Aaron was so excited to find this awesome 175 year old wood plane in an antique store in town. It’s even more beautiful than the photo shows. The things you can find in small towns… 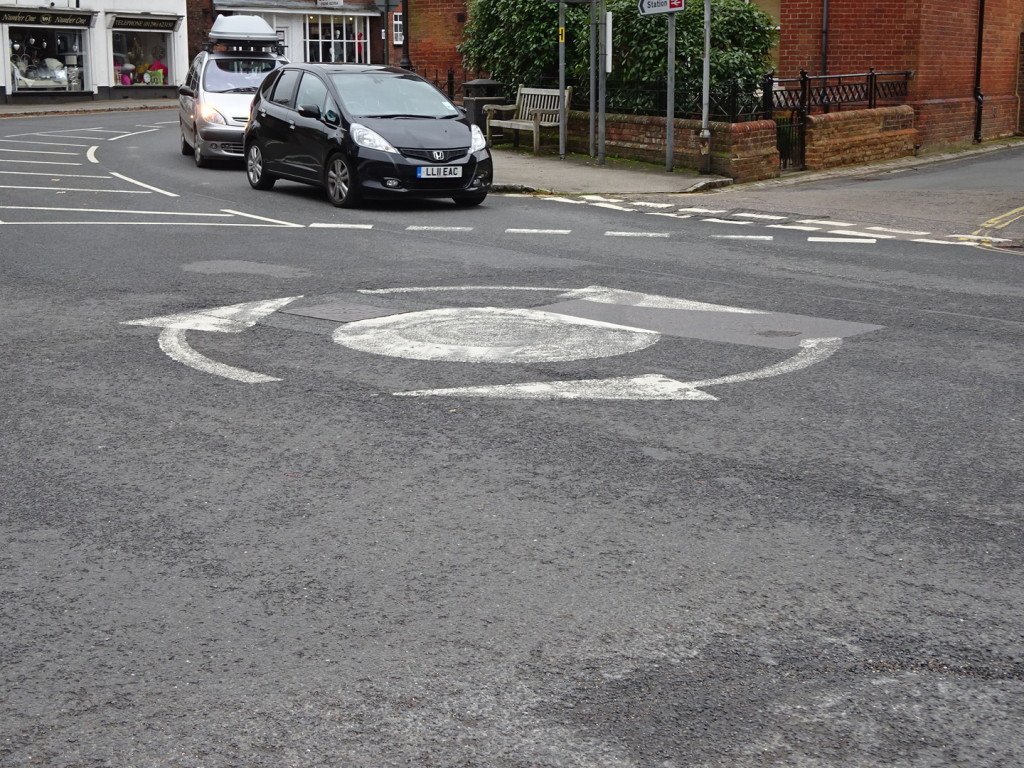 If you’re a fan of roundabouts, then have we got the place for you! So nice that they have arrows directing you which way to go!

Wendover would be a home to two reunions for us. First was with our friend Matthew who we orginally met waaay back in Costa Rica just a couple weeks into our trip! As I navigated my way through the hostel back then, looking for a millenial that I thought could help us set-up our tablet, we spotted Matthew and offered him a beer for his services. Over the next few weeks we kept running into him, including on Thanksgiving in a real off the beaten path kind of place. He joined us for dinner and we found American football to watch – it was Thanksgiving after all. Then, on my birthday dinner re-do in Ecuador, Matthew happened to be passing through so he joined us. I guess we shouldn’t have been surprised when he told us he lived near where we were housesitting in England! After work he met us at The George and Dragon, a pub that specialized in Thai food. A weird combo, but really some of the best Thai food we’ve had in loooong time. He told us all about re-entry after his travels…not looking forward to it, myself. Can’t we just keep going and going and going? Sigh. Anyway, it was a great evening and I’m sure someday we’re all going to run into each other again. 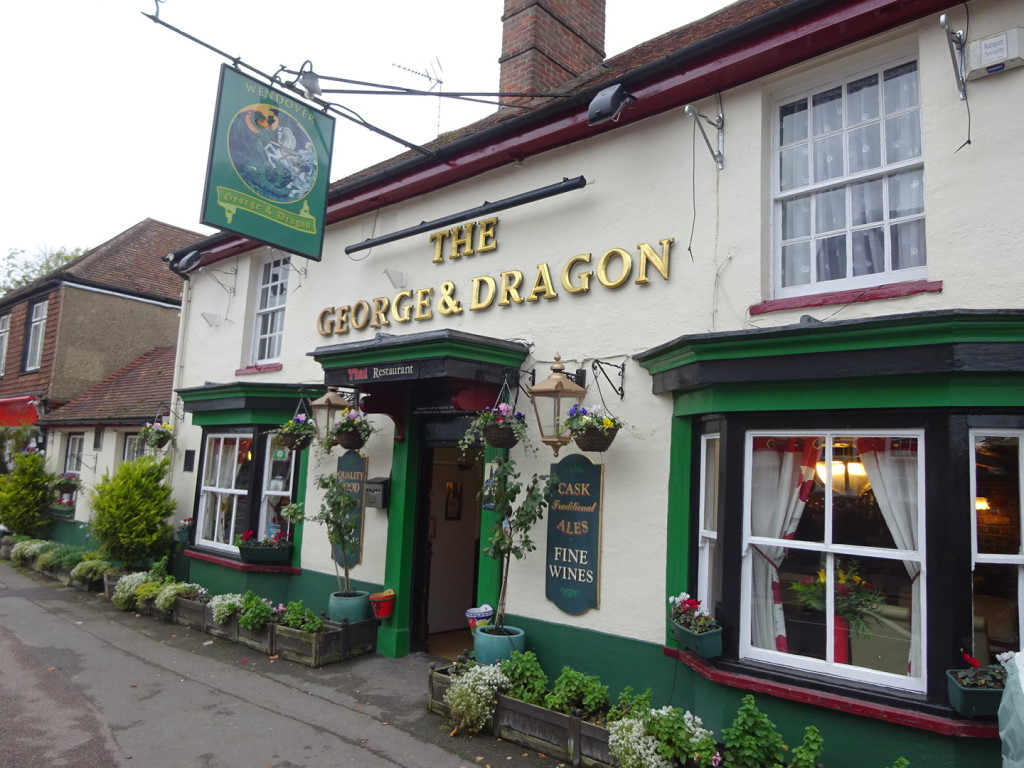 Sure, it may look like a traditional British pub, but it served some mighty fine Thai food! 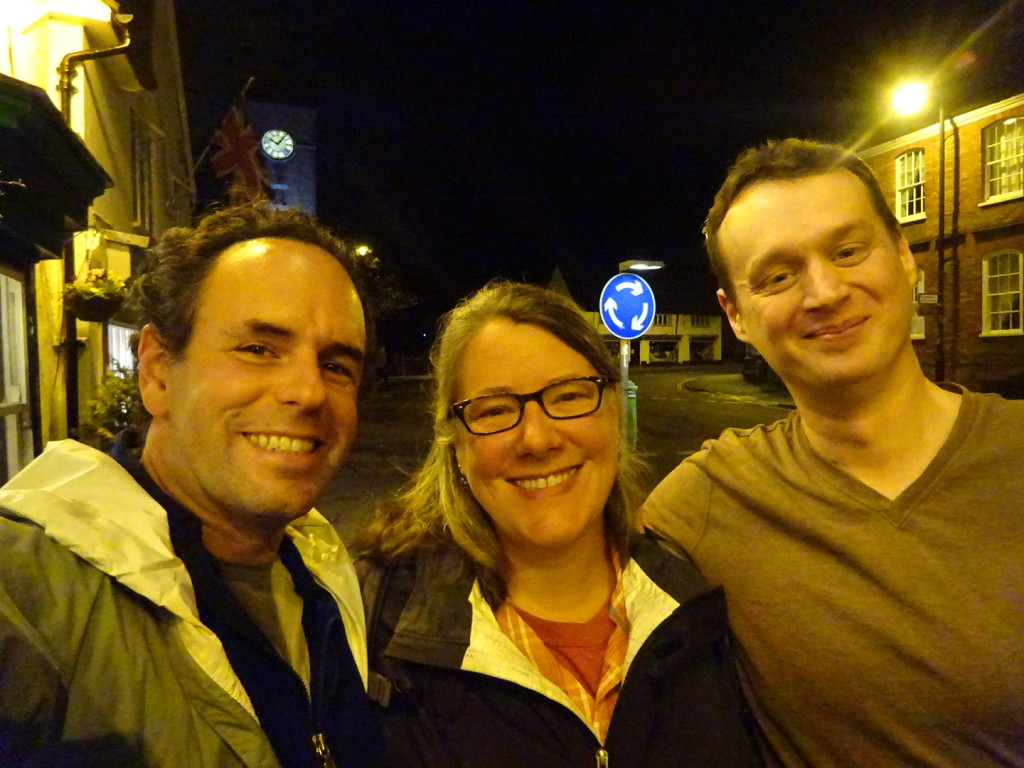 Matthew! Thanks to you we can download this photo.

The next reunion was with Lisa, one of our fellow horse trekkers from Mongolia. Lisa and I had the honor of walking down the Pass of Death/Sunshine without having to handle our horses along the way. It was our first real chance to talk on the trek and we hit it off. Lisa lives in London and, happily, she made the trip out to the country to see Aaron and I. We took Maddie and Lisa’s pup Dizzy for “walkies” in the sheep fields. Both pups loved it. Dizzy can run like a jack rabbit. Though I told Maddie she was the winner, I think Dizzy out paced her. With the pups walked, we went back to the village to check out another pub, this time for a traditional British Sunday roast dinner (i.e. – lunch). I’ll just say that it was as close to my own mother’s Sunday dinner as I’ve ever, EVER had. Plus, we got to learn about Yorkshire pudding – which is not a pudding at all. To me it tasted like a popover. It was a light, flaky, most certainly fatty, dough that was fried up in a bowl shape to hold the meat and gravy. Deeeelicious! Our eyes rolled into the back of our heads as we all announced how damn good it was! Over lunch we talked art and re-lived some of the highlights of Mongolia. While we had never ridden before, it turns out Lisa had ridden when she was young, but not in 20+ years. She loved it so much that she has signed up for another horse trek a little closer to home! We think it’s awesome! 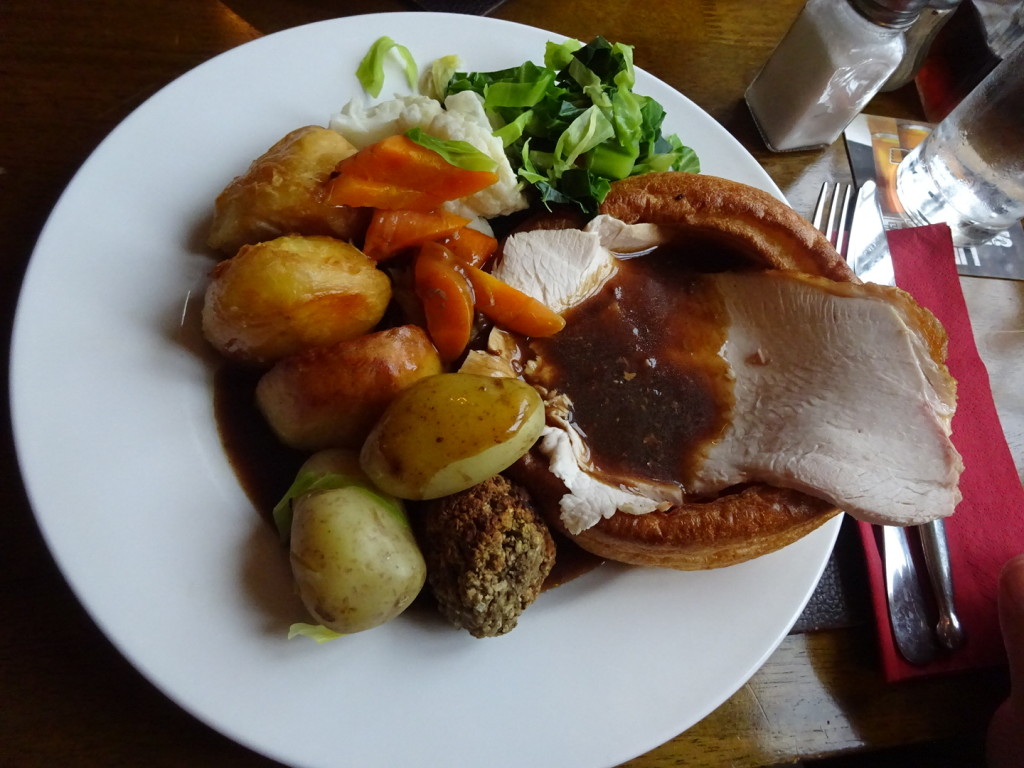 A dinner to remember. In fact, I could go for this right now!

The pub welcomed dogs inside, including Dizzy who was served some water in a dog bowl. Health inspectors probably wouldn’t let that happen in the US, I’m guessing. Sad. The pub was also filled with locals who were very friendly and gave a everyone a wonderfully hard time. They poked a little fun at us for our gushing about the tastiness of the lunch, “Awwww, we would never say such a thing…only you!” The chef yelled “Yeah, they never compliment me” to a round of razzing. Just a room full of good-natured neighbors. All too soon, though, it was time to say goodbye. 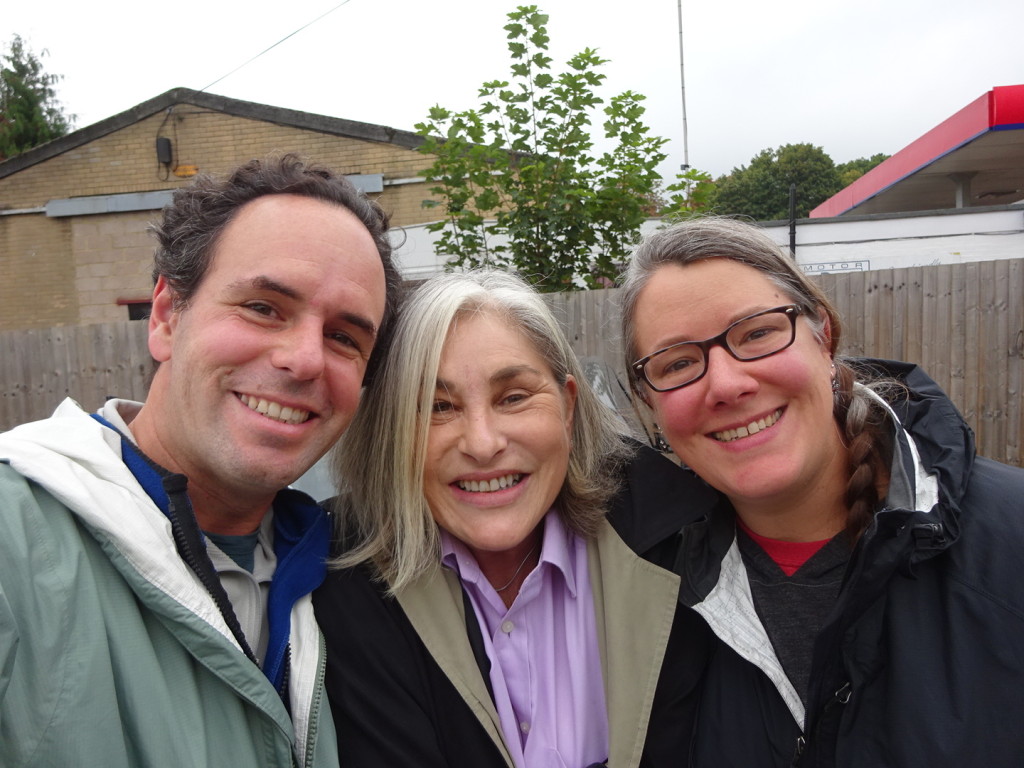 Such a wonderful roast dinner with our friend, Lisa!

Shortly after bidding Lisa adieu, it was time to also say goodbye to our pet charges under cover of darkness, for our 12 hour trip to meet PapaBarr and Miss Grace was about to begin. Bring on Dublin! 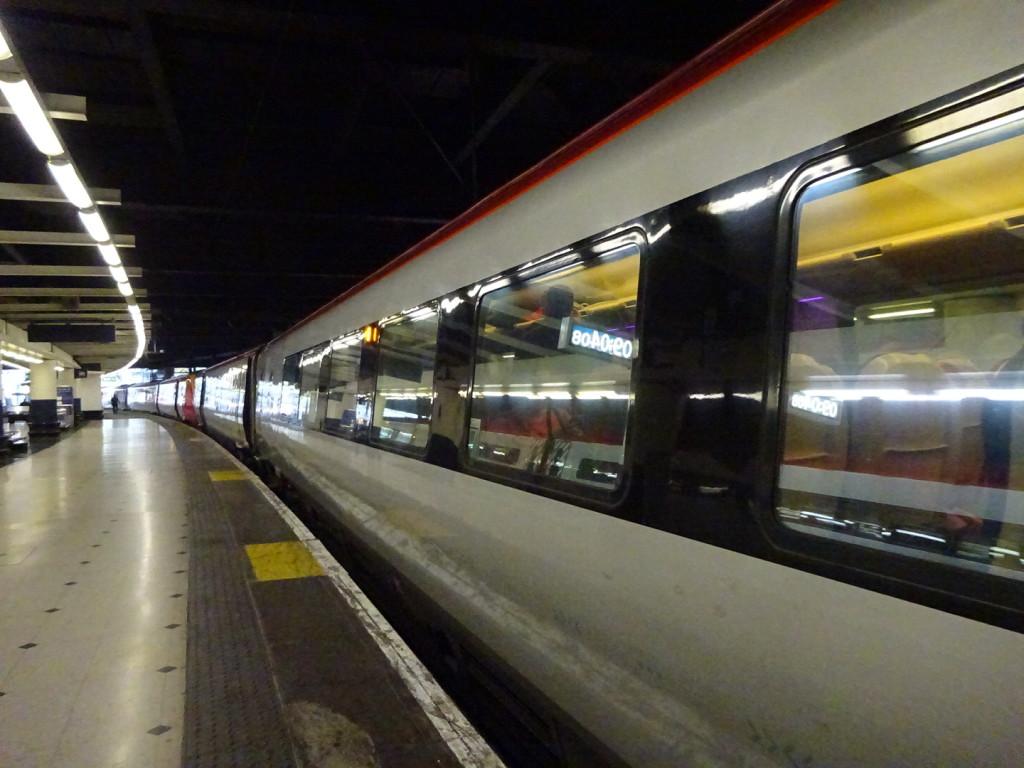 « What it Cost: Ireland
How Many Cameras? »