Right off the bat, let me say that we’ve been incredibly lucky with the weather so far on our big trip. It’s been the height of rainy season most every place we’ve gone, but we’ve yet to get rained out anywhere important. Well, our luck continued with the unbelievable Machu Picchu! Honestly we’re just not that into ruins, but we were so close that we HAD to go… and Machu Picchu WAY exceeded our expectations.

The trip started in bright sunshine (after a couple days of rain!) with a van ride to the town of Ollantytambo where we spent about four hours exploring and hiking to some ruins. Gotta say it was a really cute little town. If we had only known, they have a non-profit organization (Awamaki) that arranges homestays and opportunities to learn crafts from indigenous artists, like in Saraguro! Aaron was really bummed when he saw that he could have been learning woodworking from a local master! If we had it to do again we would definitely stay a few days. 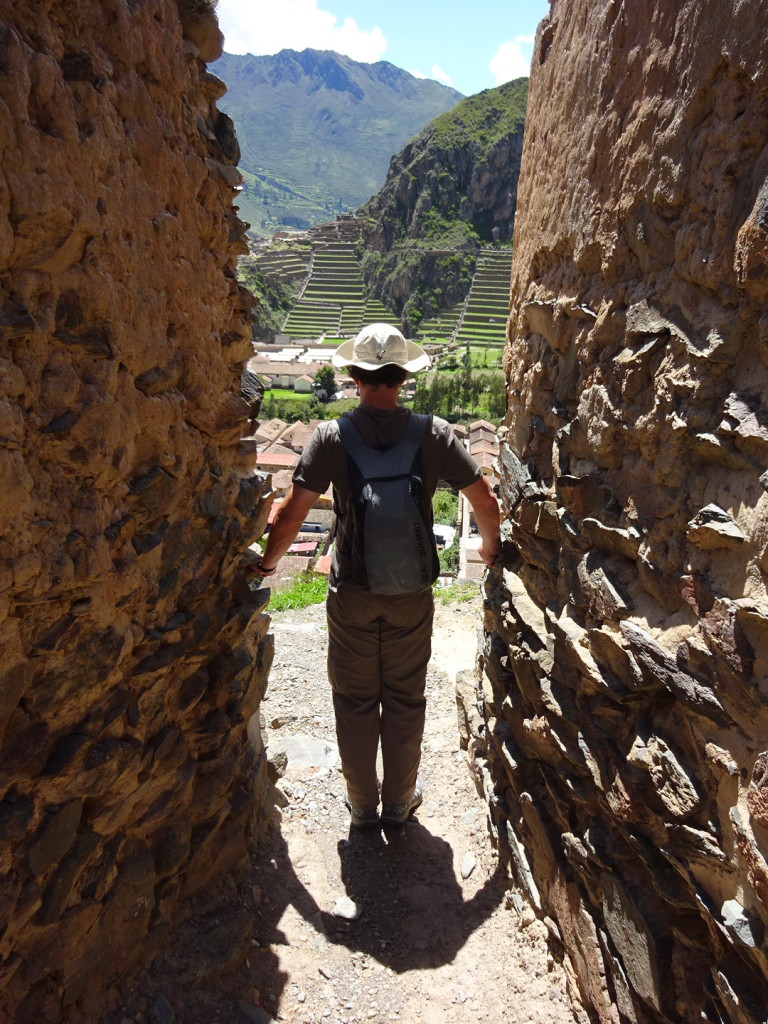 Aaron in the ruins. 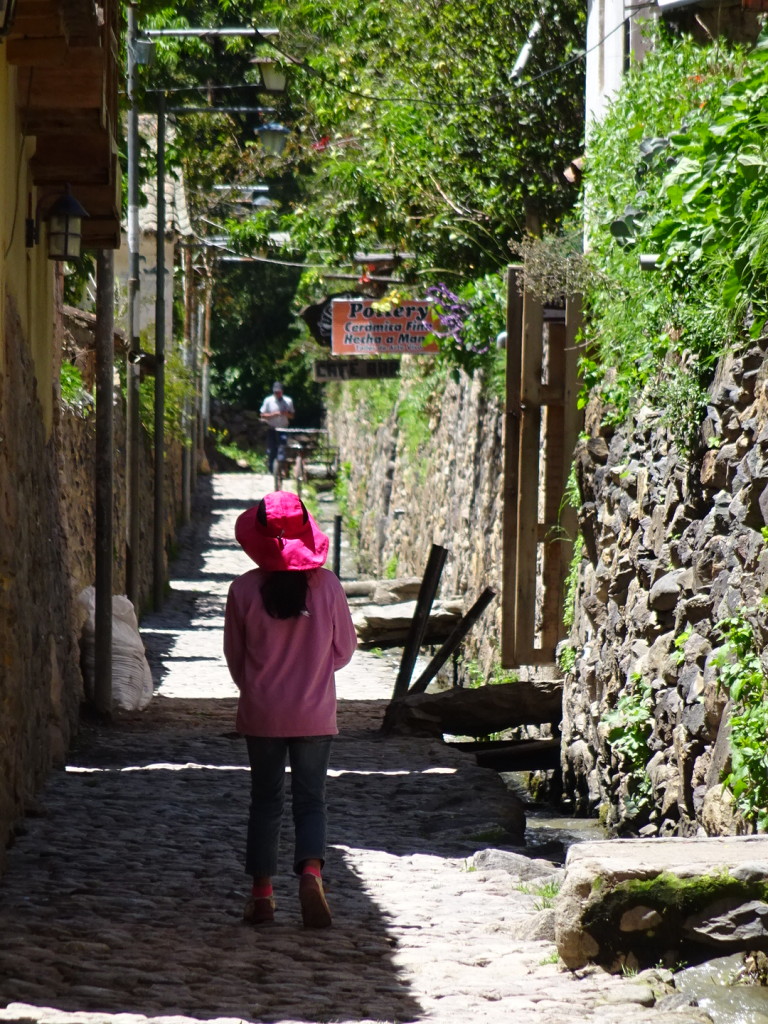 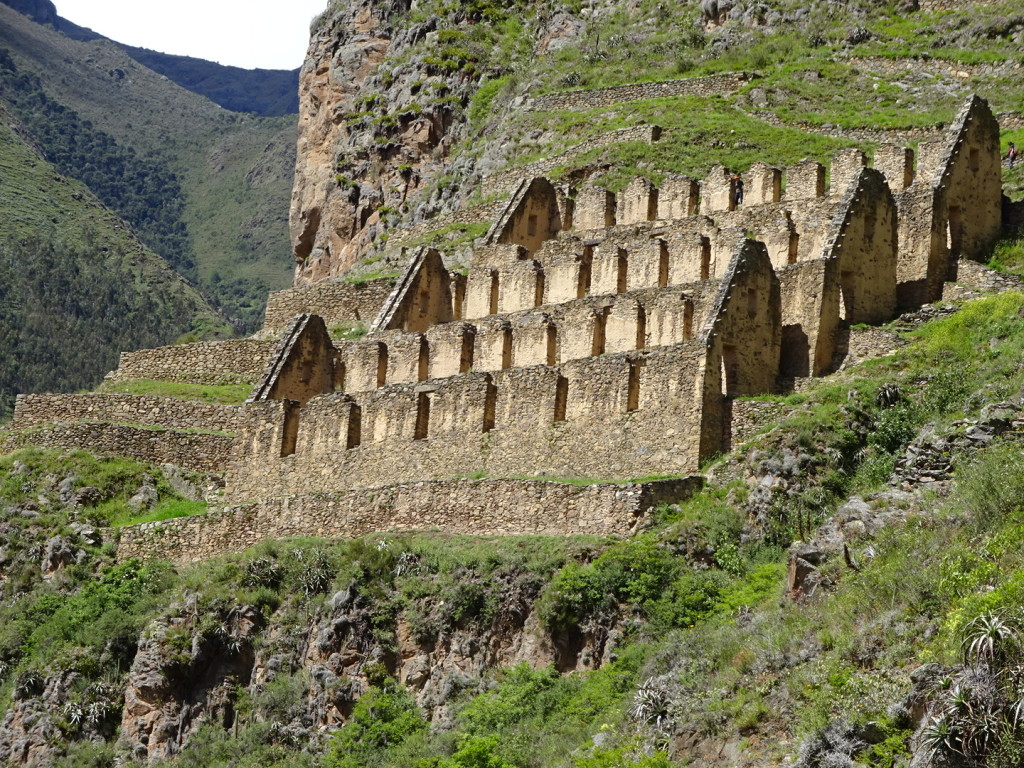 Yep, plenty of sunshine on the ruins above Ollantytambo.

Then it was onto the train (you can only train or hike from Ollantytambo) for a 90 minute ride to Aguas Caliente…the gateway to Machu Picchu!

Oh so excited about the train to Aguas Caliente! 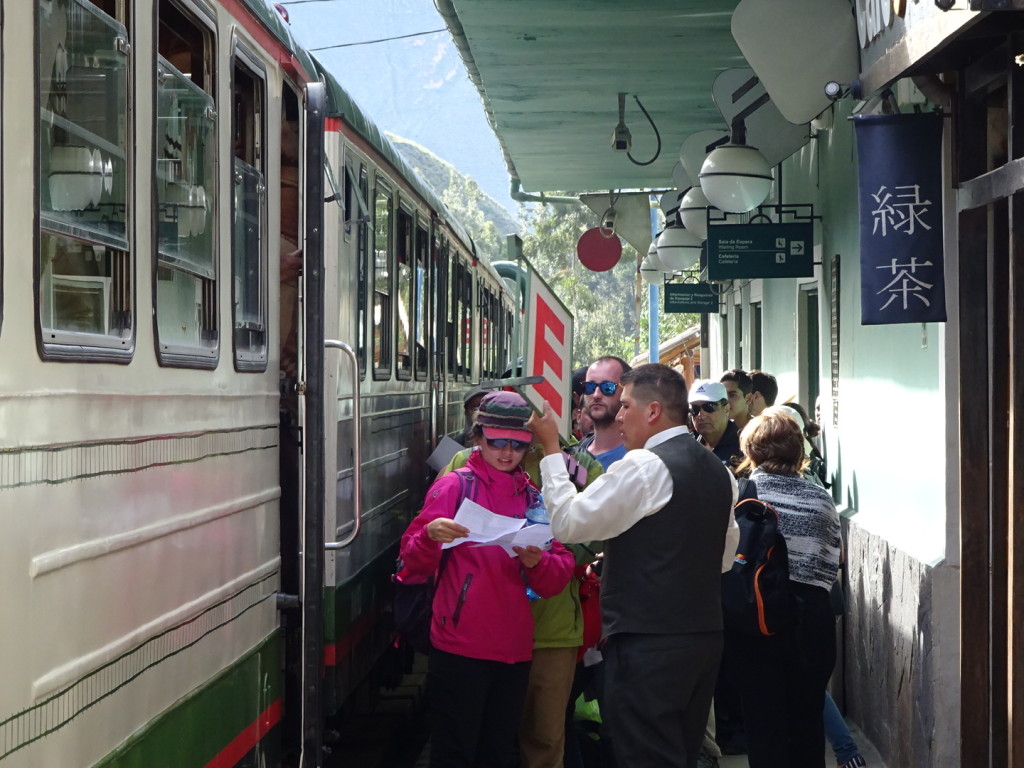 The next morning we were up bright and early to try to see the sunrise at Machu Picchu…unfortunately no such luck. It thunderstormed all night and in the early morning we walked in the rain with our guide, Victor Hugo, to the shuttle bus. Up the curvy road and our guide led us into the park. As we turned the corner we got our first glimpse of Machu Picchu…covered in thick clouds and fog. Bummer… 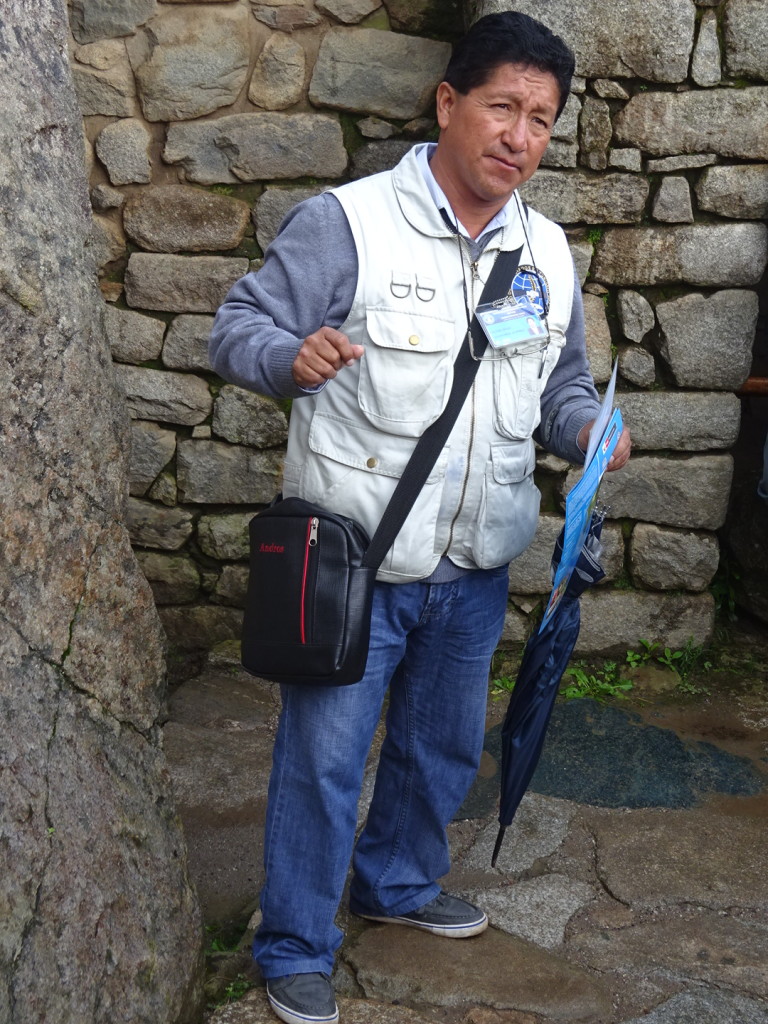 As Victor talked to us about the ruins, the fog started to lift in the most magical and awesome way. Slowly the clouds gave way to bright and I do mean BRIGHT sunshine! We saw MP in all it’s glory. Like a postcard! Quite magical, really. 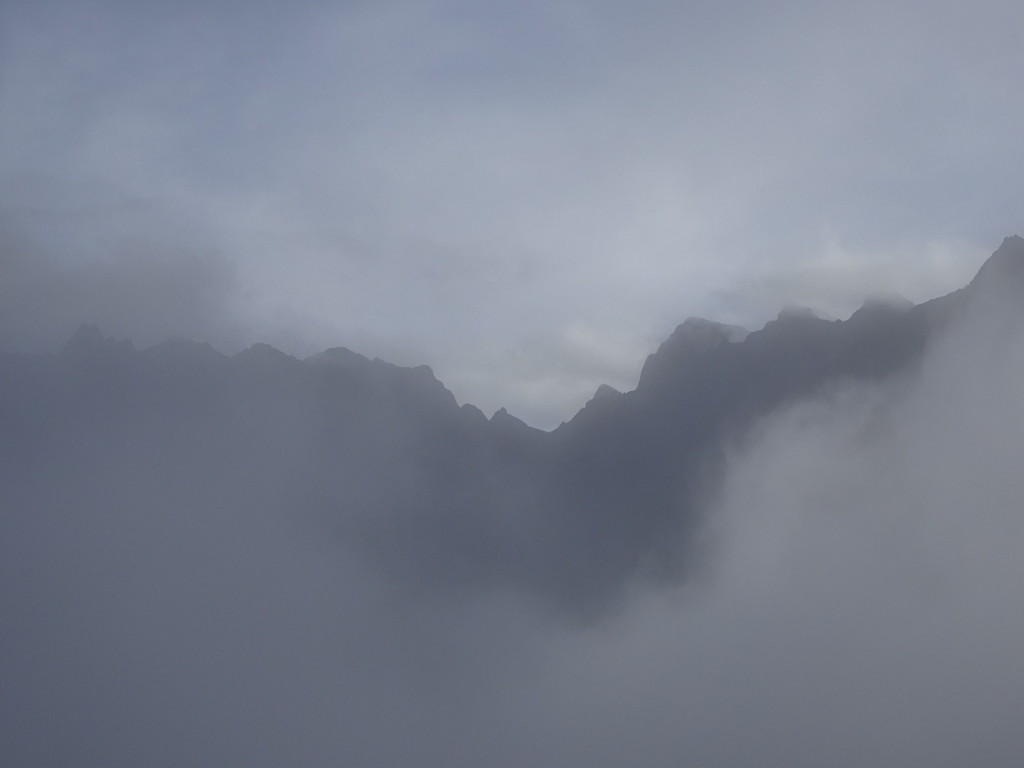 The view early in the morning.

The sun is just starting to come out and the clouds are lifiting. Exciting times!! 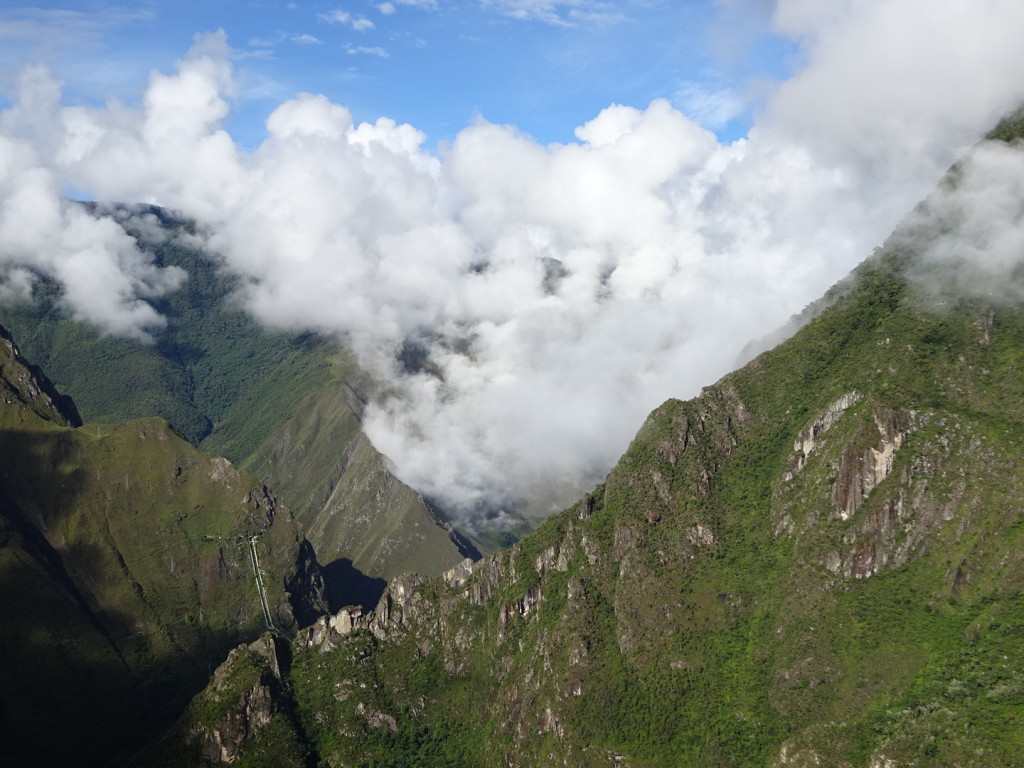 The view from every angle was just stunning. 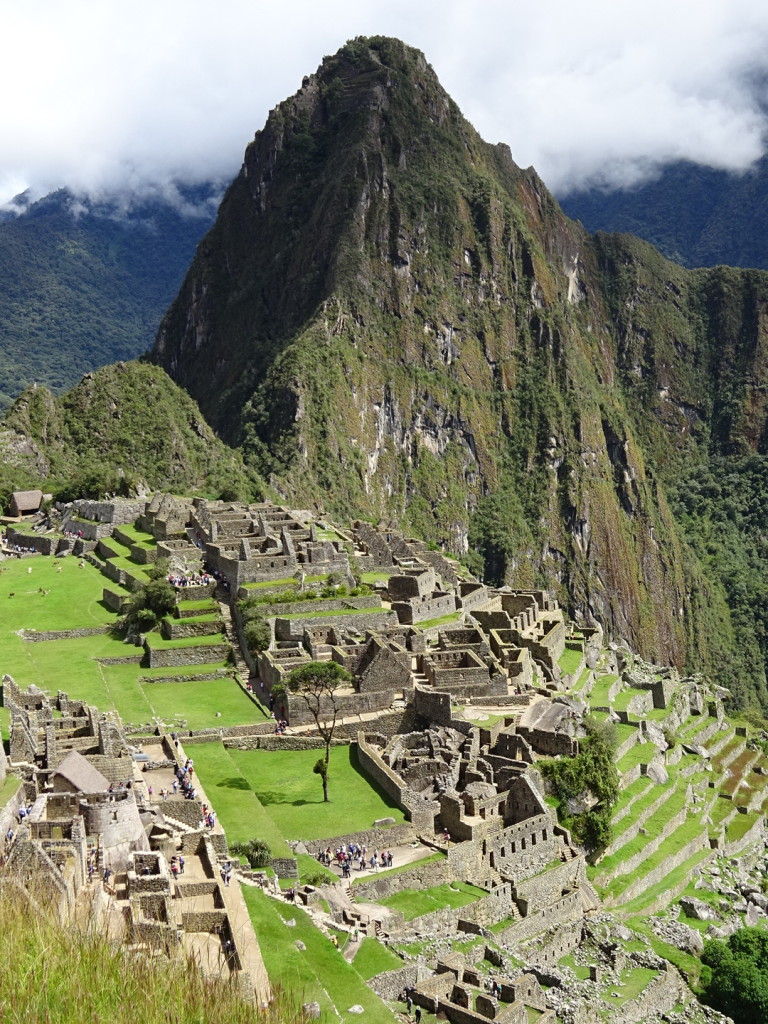 After exploring the ruins we headed off on a couple of hikes (including to the Inca Bridge – neither a suspension or floating bridge – which I thought was a big disappointment, but the hike was nice) and by the end of our 6+ hour stay the clouds had returned along with some spitting rain. As we boarded the shuttle bus back to town, the rains started in earnest, thus concluding our trip to Machu Picchu. If you ever have the chance, just set the alarm clock early and go! It’s SO worth it!

Because Anner can’t help herself, here are a few historical and engineering notes.

First of all, a big thank you to Mrs. Toll’s fourth grade social studies class. It was there that I first learned about the Spanish conquest of South America and the Inca Empire. Officially, the name of the kingdom that the “Inca” (chief or king or emperor or president) ruled over was called “Tawantinsuyo”. When we say “Inca Empire” or talk of the “Incas” we are making a bit of a faux paux. Our local Quechuan guide through Machu Picchu told us so. If at any time in this post I refer to the Inca Empire or The Incas, what I really mean is the “Tawantinsuyo”. Now that we are on the same page about that…

The Inca Empire lasted from about 1200 – 1572 and was about 10 million people strong until the Spanish lied to and then killed the last Inca, Tupac Amaru. Conquest is ugly business! Machu Picchu was built between 1450 – 1540. The Spanish never found it – which is good because they destroyed and built over most of the Inca buildings – and that’s why it’s sometimes called The Lost City of Machu Picchu. It was re-discovered in 1911.

Did you know the Incas built PAVED ROADS? In fact, they had a complex road system…but no wheel for transportation! Roads were used for walking and running. Their messenger system could cover 250 miles a day on foot. They carefully constructed important buildings out of perfectly carved stone – no mortar, but so finely built that you can’t slip a piece of paper between the bricks. 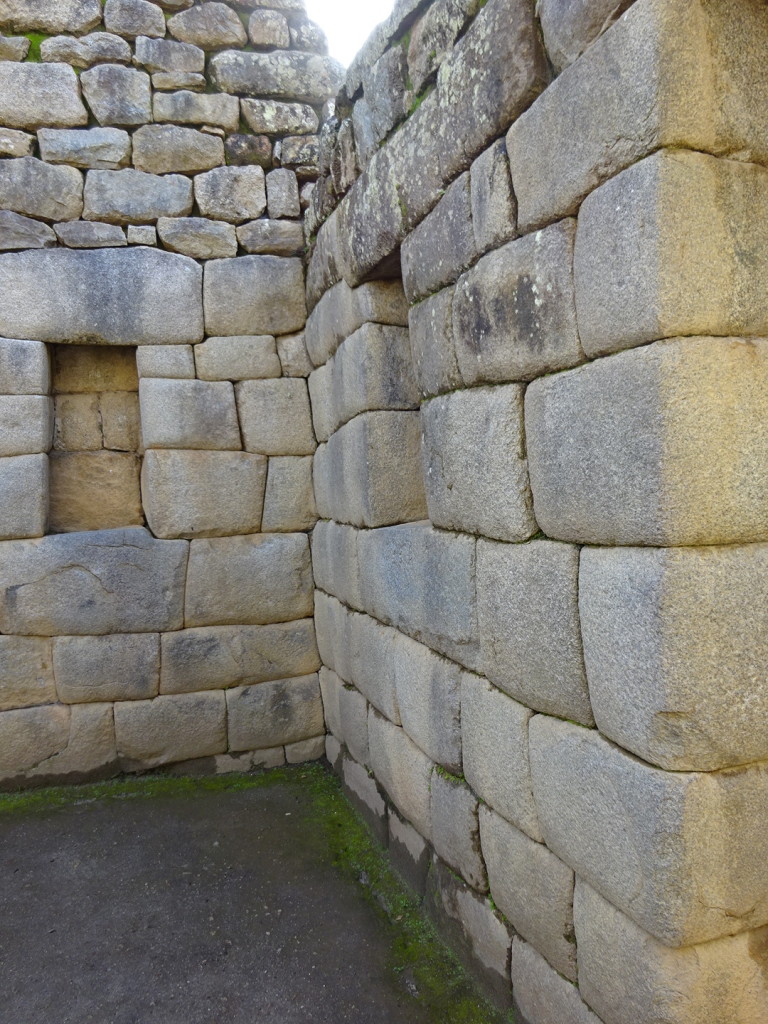 Look at how perfectly carved the stones are. That part was just incredible!

In fact, Machu Picchu has nine foot foundations which is part of the reason why it is still standing today. Even though the area is full of mudslides and earthquakes, the construction has been very long lasting, to say the least. Machu Picchu also has its own water system that brings fresh water down to fountains that the residents could use. It’s still bringing flowing water to the city today! 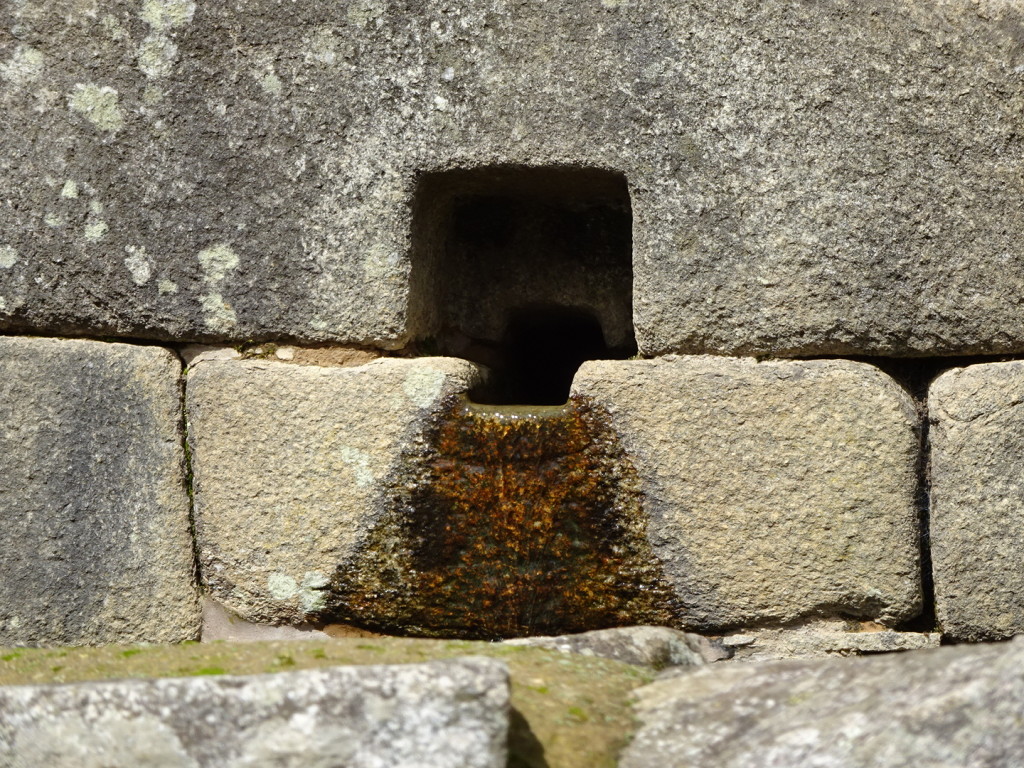 This is part of the water system. These fountains still operate today – incredible!

And my favorite thing I learned was that the Incas built suspension and PONTOON/FLOATING BRIDGES!!! AND they charged tolls!!! Friends from 520, are you reading this? 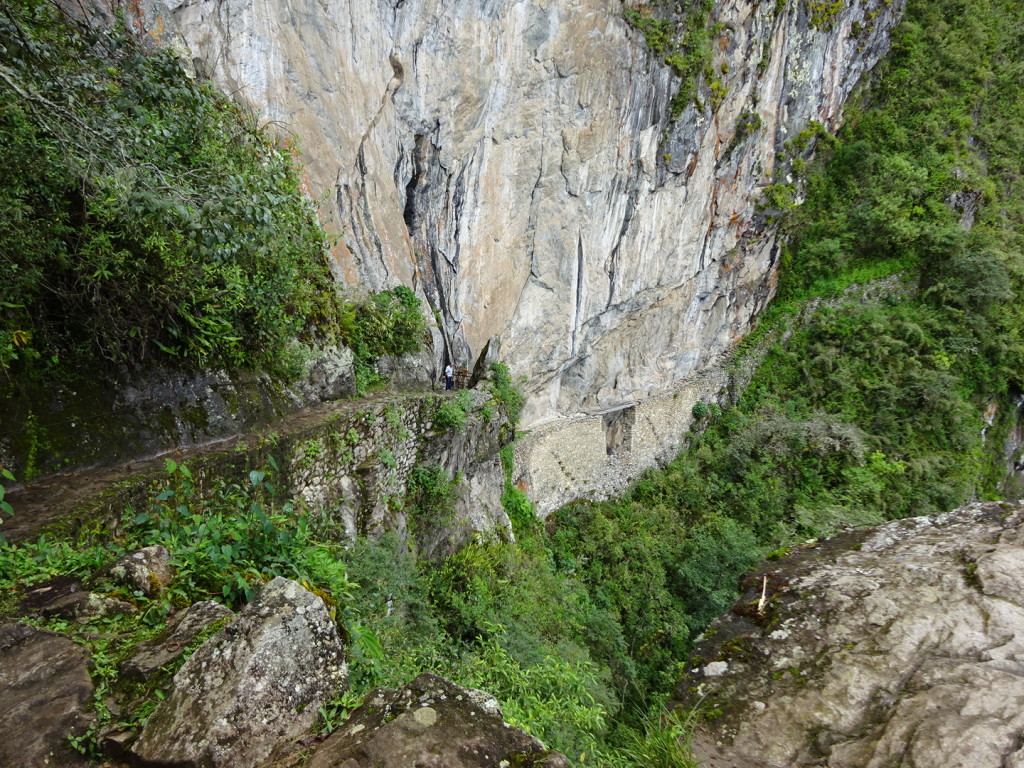 The high up view of the Inka Bridge and the trail leadig to it.

Look at the cute little bridge! I seriously doubt the Incas used wood to cross this bridge. Not sure what it once was, but the hike was nice.

A few more pictures, just because: 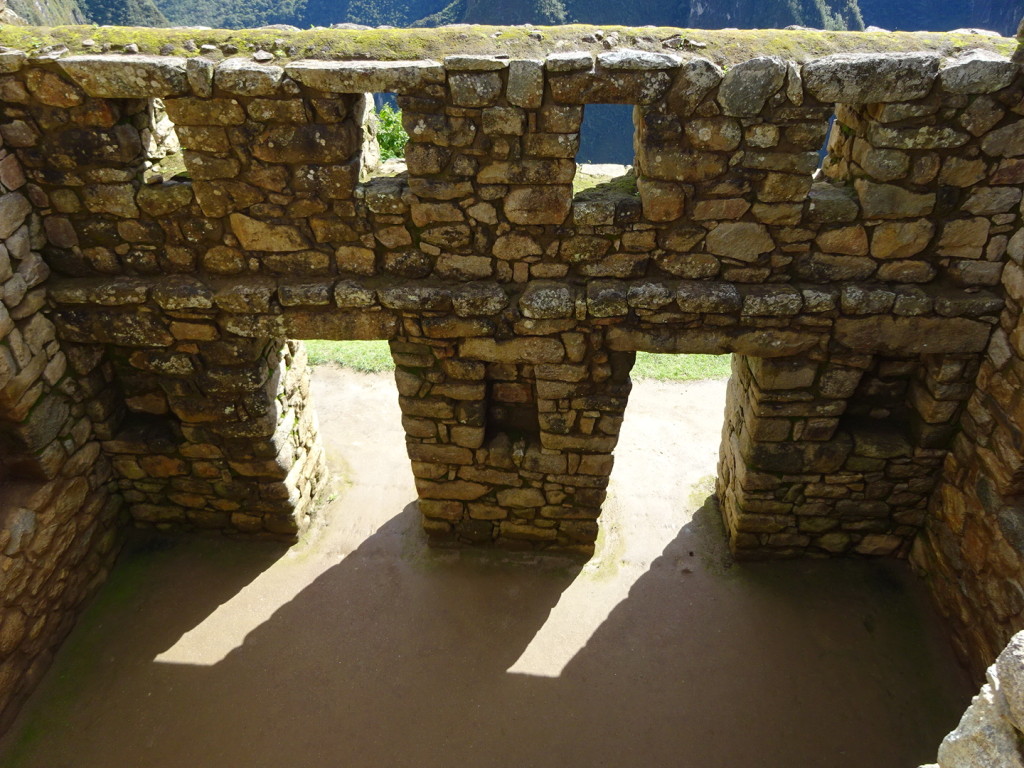 Proof the sun was bright.

As the fog lifted… 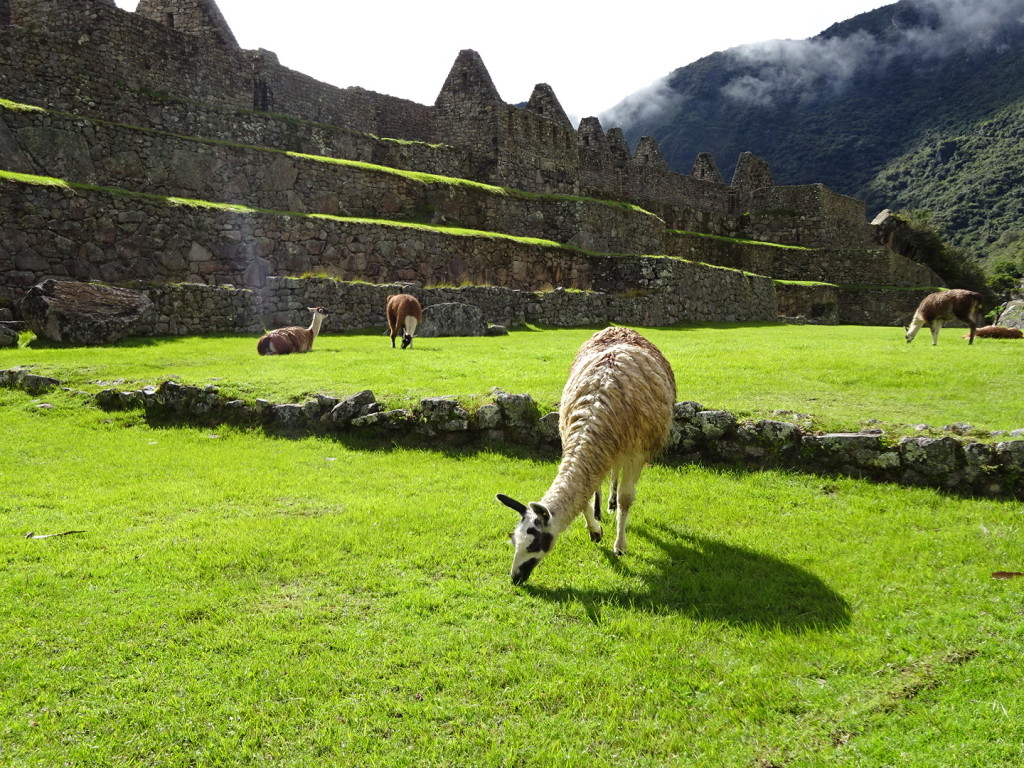 Llamas! Yes, right here inside the ruins. Perhaps it was to give us the idea that animals would have grazed within the city? 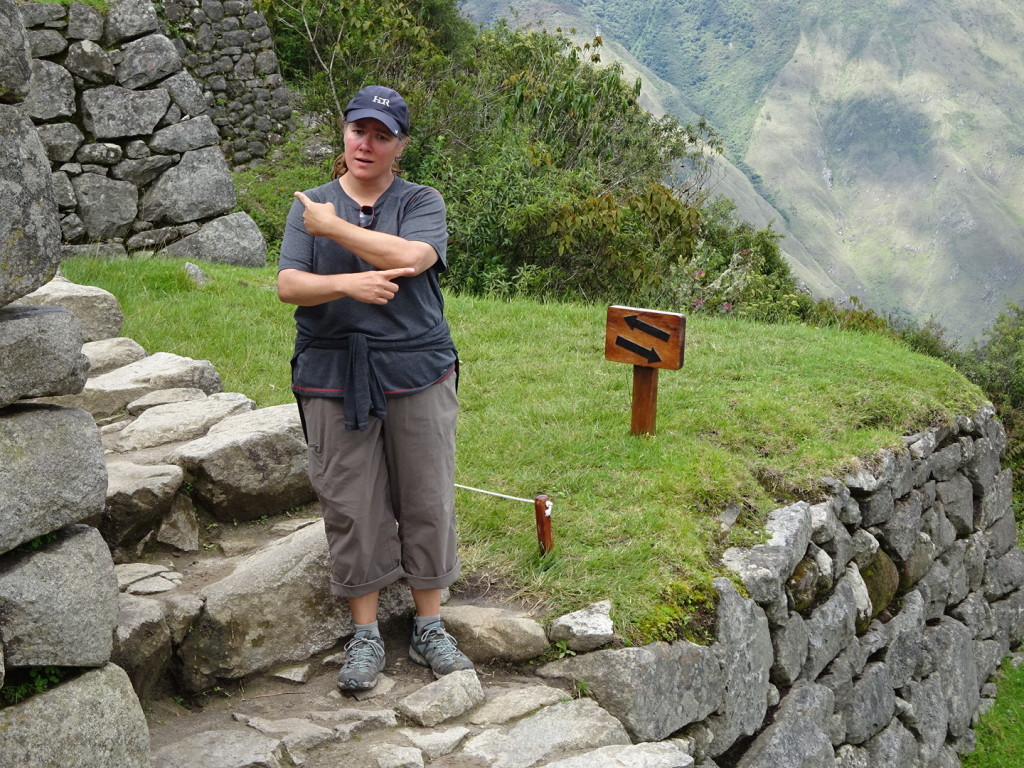 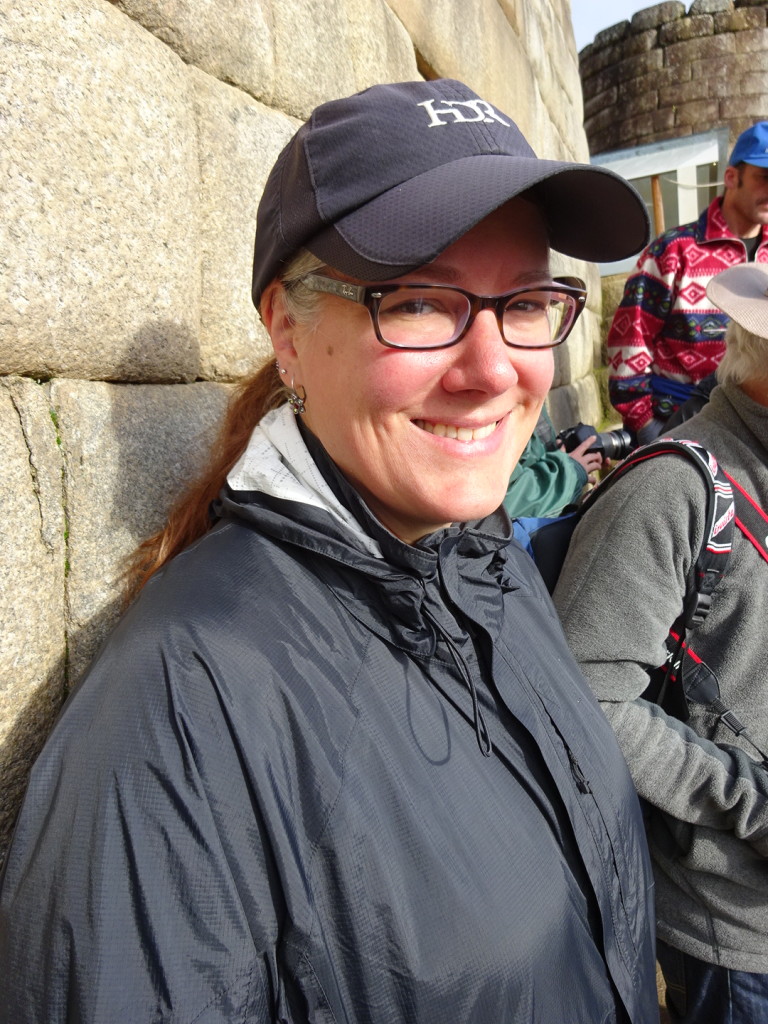 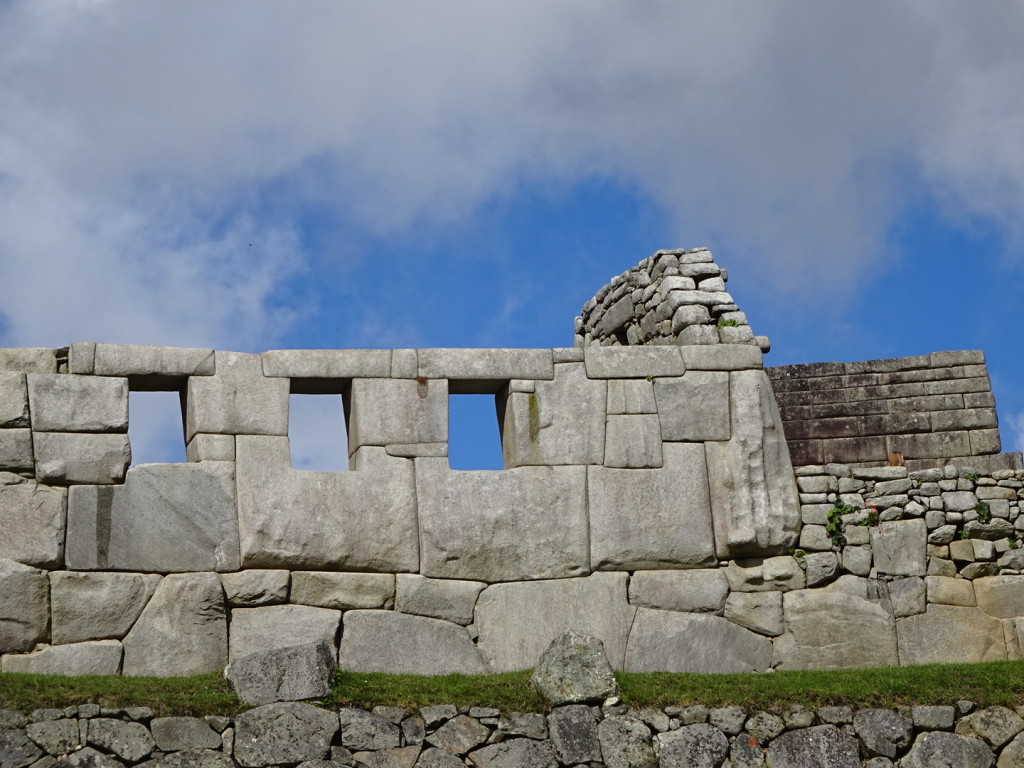 Ruins in the sun. 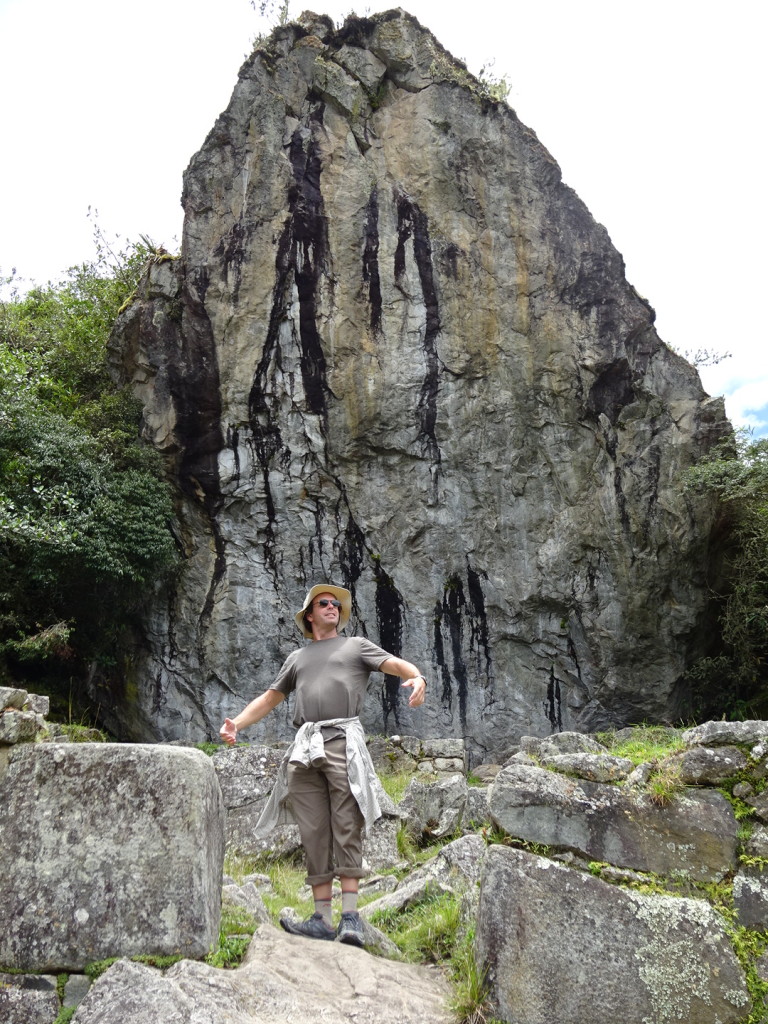 Either he’s claiming this rock for his own, or practicing ballet. 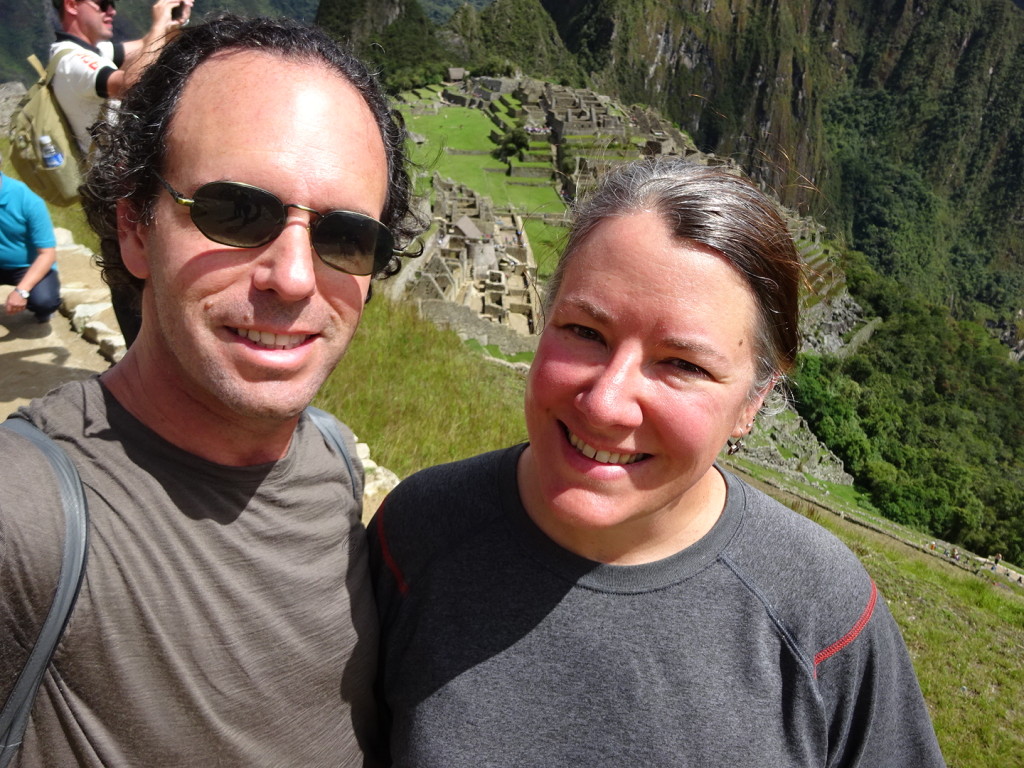 That’s all for now!

« What it Cost: Bolivia
Lake Titicaca and the Uros Islands – Let ’em Float! »