Meeting artists in Ñamarín and Saraguro – The Jeweler

Antonio is a university student in Cuenca studying to become a teacher. He’s also a young jeweler with a home/studio/shop in the center of Saraguro (about 2hrs from Cuenca). Most importantly, though, he’s ALSO the focus of the second part of my soon-to-be-Emmy-award-winning series: Meeting artists in Ñamarín and Saraguro. Watch for it in the soon-to-exist-category of Short Blog Documentaries!

Antonio at his bench

Getting back to Antonio… while trained by a local jeweler in Saraguro, but he’s still a relatively new jeweler exploring the world of creating in silver. Like many new jewelers, he’s taking classic old forms and putting his own spin on them. Unlike many new jewelers, he’s also doing things like creating his own alloys and his own solders! I have to admit I was taken aback when he asked me what percentage my silver solder was…sometimes I forget how easy I have it in the US where I just purchase soft, medium or hard solder without knowing what that means creation-wise. Yes, I can say how the solders react to heat, but do I have the slightest idea what percentage silver they are? Sure don’t! Antonio can say for a fact that his is 50% silver and 50% of some copper alloy since he has to make it himself!

Speaking of how easy we have things in the US. I’ve constantly heard how amazed jewelers here are with all the possible tools that can be bought in the US to make things easier. They seem to be able to get dapping tools (steel punches designed to give domed shapes to sheets or discs of metal), flex shafts and rolling mills (like you might have seen if you watched the videos of me making a copper basket), but that’s about it. Everything else they are adapting or making themselves. It’s really impressive to see and a great reminder that it’s the artist that makes the work, not the tools! 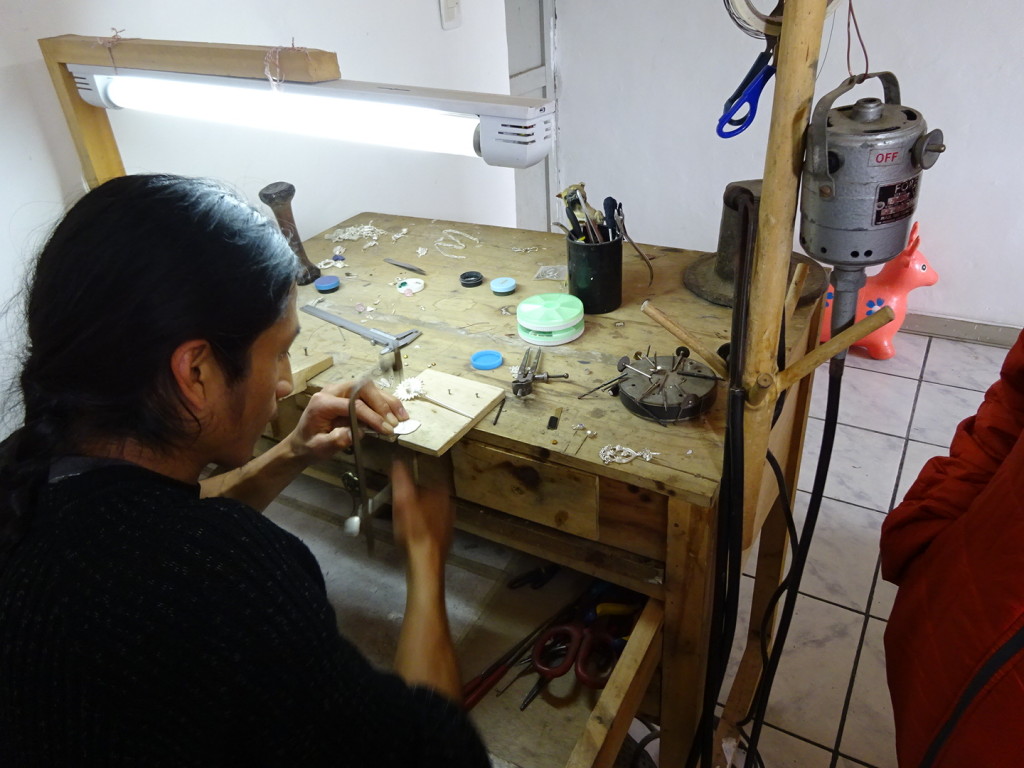 Not exactly a ton of tools here… 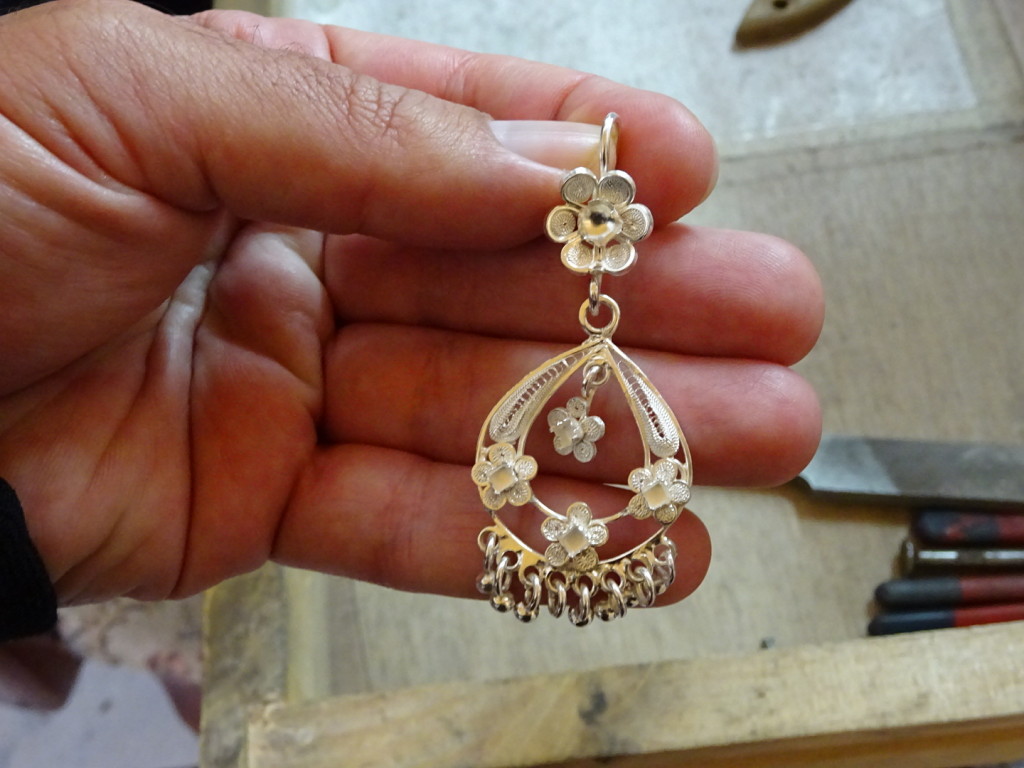 …but some beautiful work!

I asked Antonio about his take on the tupu, the silver pin I described the indigenous Weavers wearing in Part 1 to hold their shawls together. The pin is traditionally about 9″ long with a 2.5-3″ cast top soldered to a 6″ silver “spike” that goes through the shawl. The top piece is traditionally a sort of sun shape with a gemstone in the middle and the rays of the sun ending in faces that, I believe, represent the stages of life, though they are essentially the same stylized face. 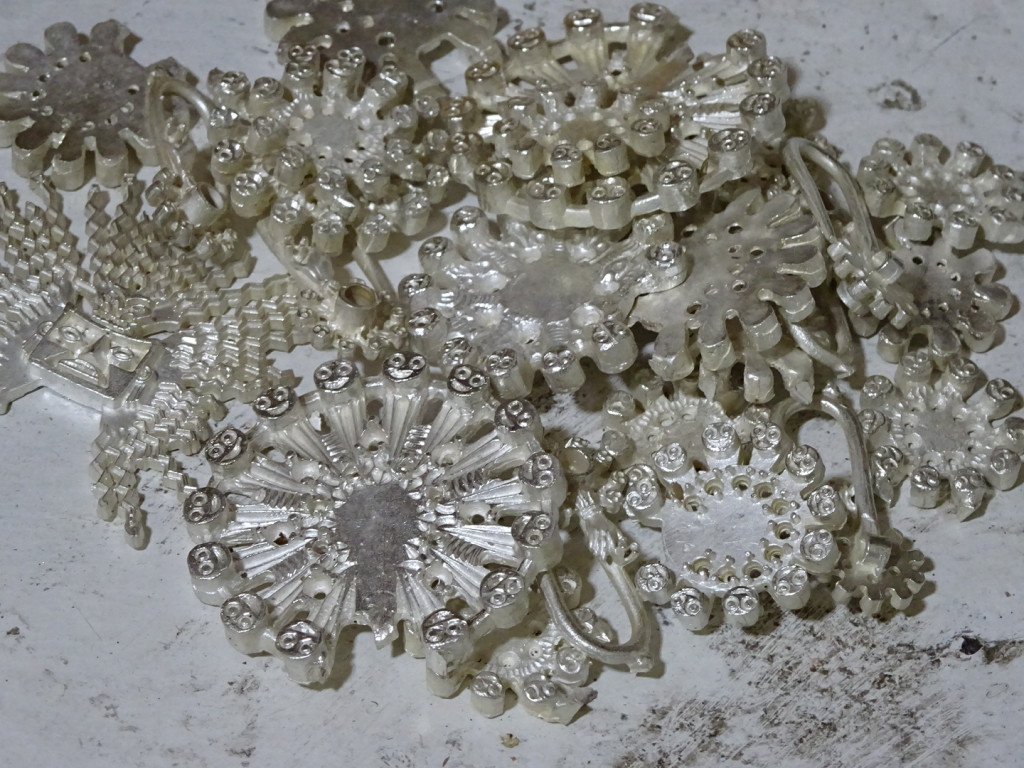 Traditional cast tops with the faces around the sun. The spike/pin and hand will be soldered to the flat area. 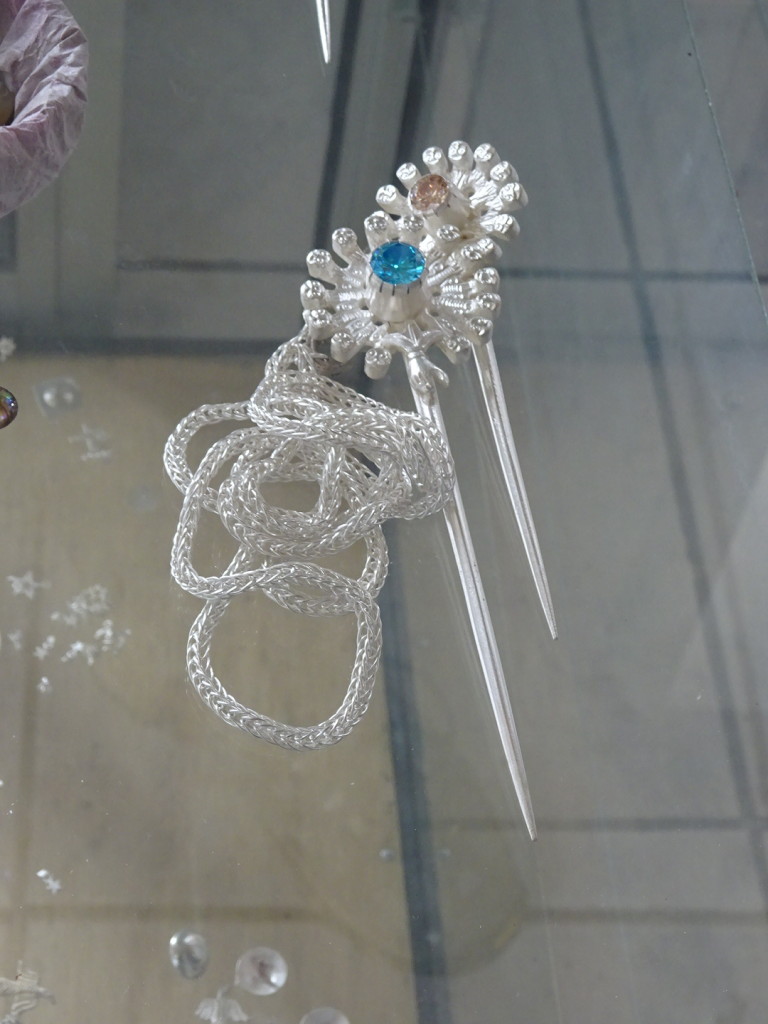 Traditional style tupus in big and small. Yes, he hand makes the chains, too.

Antonio has been making traditional styles, but also his own version which is a bit smaller, perhaps 7″ total, with a top that has only engraved sun rays or, as we started on together, a top that is half sun/half moon. It is nice to see him trying a creative update on a classic! I mentioned in the last post that the pins can also be used for self-defense. Luiza, our guide at the weaver’s, showed me how she could hold the sun top in her palm and then the pin/spike could be used to stab if needed. That’d be much tougher with Antonio’s version due to it being smaller and the sun’s rays being pointed, which would probably hurt your hand if you had to grip it for stabbing with! 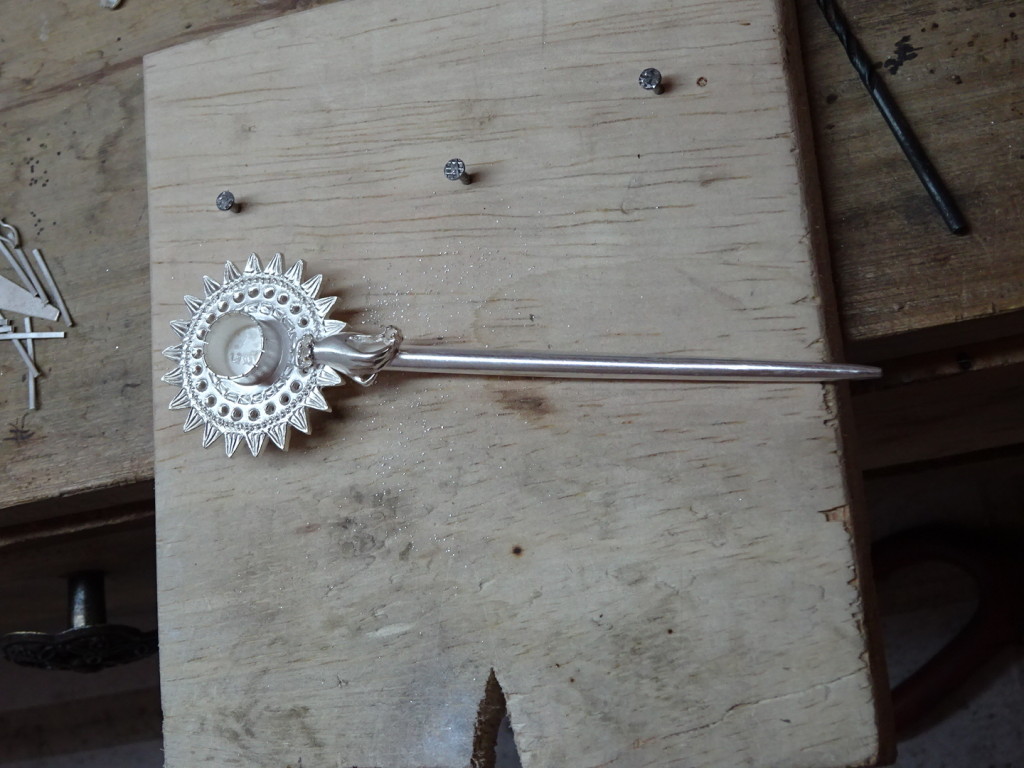 Antonio’s updated version of the tupu (pre-stone). Note the engraved rays and the cast hand.

I got to do a little cutting myself!

The half sun/half moon top I helped cut the rays on!

At the end of our visit Antonio took a moment to show me just the start of how he does filigree earrings like they make in Chordeleg. Once again, he has to make his own filigree wire by cutting down sheet and then rolling it flat – very time consuming and making me thankful again for how easy we have it in the US. He creates frames, this one for a “flower”, and then pours a type of gesso on them which hardens in 2 minutes. It’s then strong enough to solder on and, after soldering, dissolves when the silver flower is dunked to cool! A very cool new technique for me (see it in the video below). 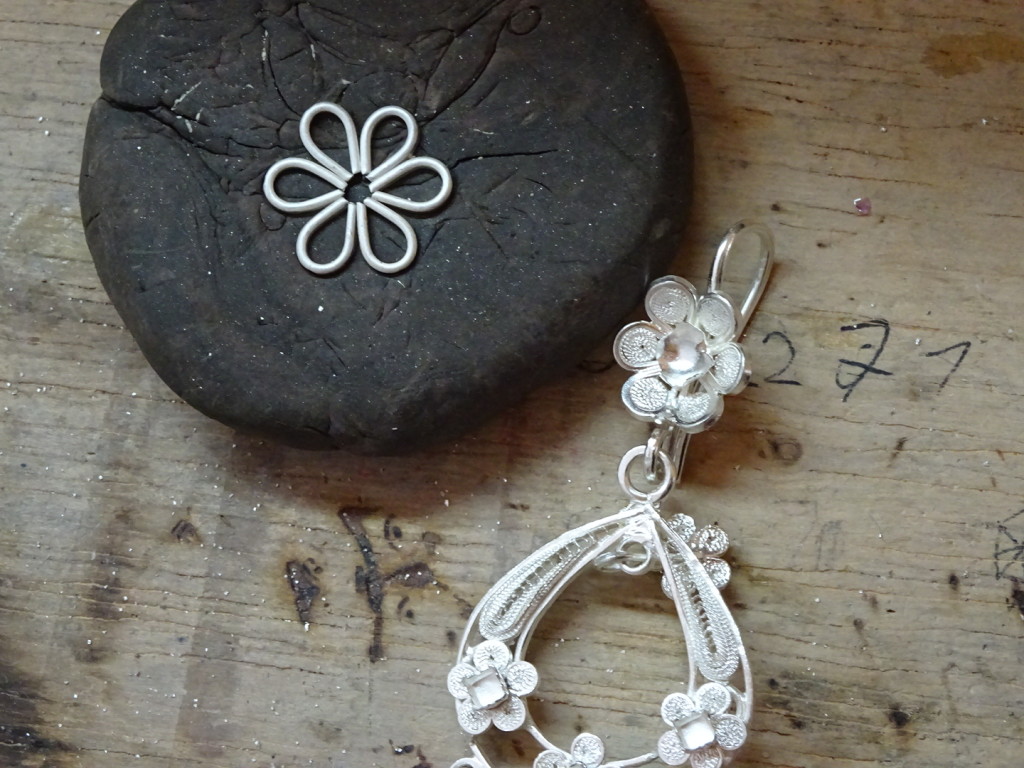 The flower next to the flower filigree earring he’s matching. He added gesso on top of this and, once it dried, he pulled it up and then soldered on the gesso.

Flame on gesso – a new technique for me! 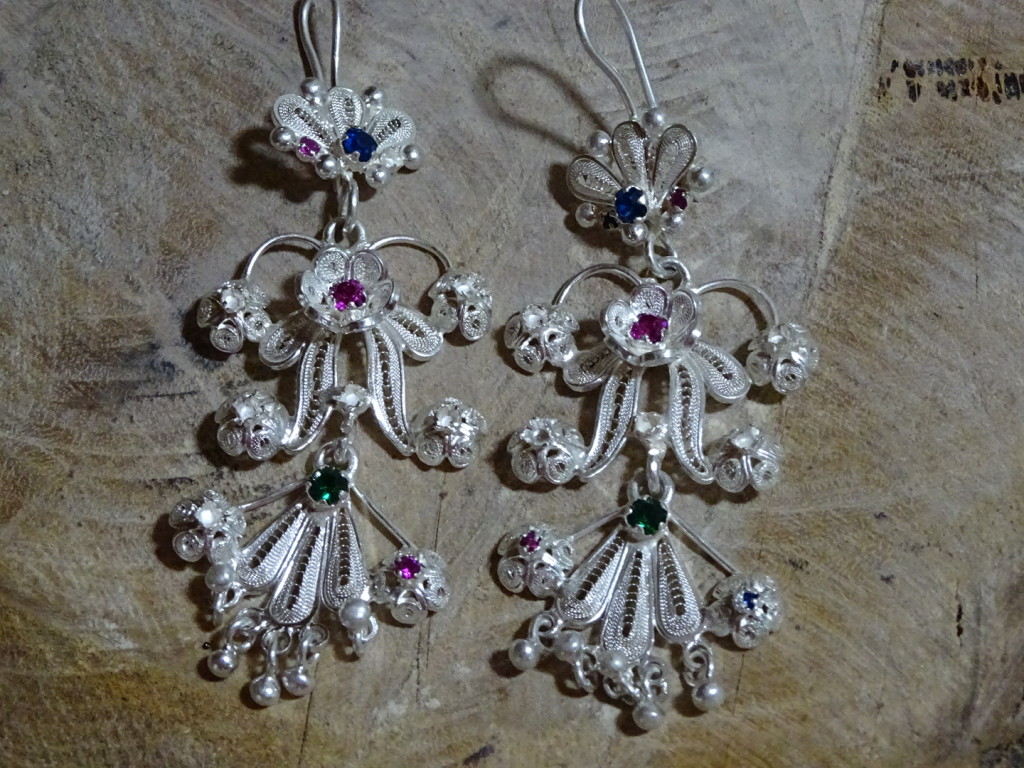 Some of Antonio’s filigree earrings made with his own solder and filigree wire!

One final piece of amazement: Antonio’s torch, which he keeps going by means of a foot pump, runs on automobile gas! Not acetylene, not butane, not propane, not natural gas, just gas like you’d put in your car! I can’t imagine that’s safe in the long run, but it’s what he has available, so that’s what he uses. 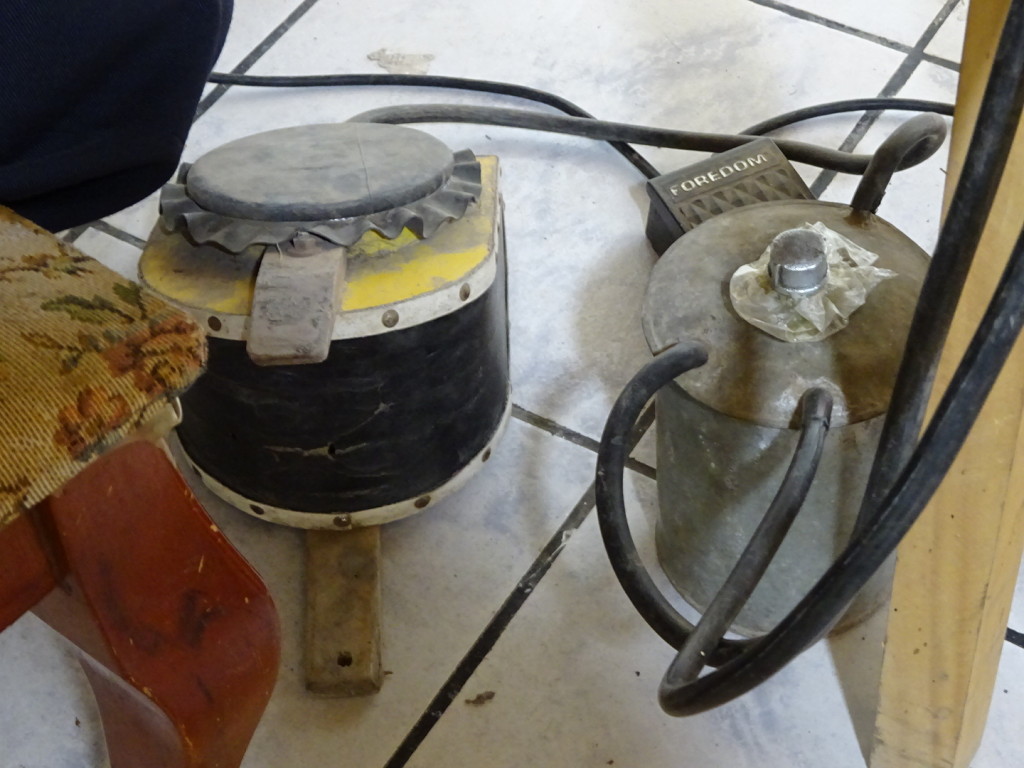 The foot pump and his tank of auto gas!

Quite amazing what he’s already done and I hope I get the chance to see what he creates in the future!

Now photos are great, I hear you cry, but how about some video? Can’t win an Emmy without video (all kudos go to Anner for video snipping – the videography Emmy is all hers)! Here you go: https://m.youtube.com/watch?v=UgAuf90alIg

Thus ends this second installment of ‘Meeting artists in Ñamarín and Saraguro’. I hope you enjoyed Part 1: The Weavers and stay tuned for Part 3 in our serial where we meet The Potter of Saraguro!