Judge me if you want, but it was all worth it!

We just spotted the first Starbucks we’ve seen in four months and four countries. We’ve seen a lot of KFCs, Pizza Huts and a few Subways and McDonalds…but Starbucks? Now you’re talking my language! No question – I HAD to go.

It was exactly like a Sbux back home, including every last display. I shouldn’t have been surprised by that, but somehow I expected some local flare. Maybe an Aztec god theme or ruins painted on the walls, but no. In a country that uses tiny little one-ply squares for napkins and dispenses them like a precious commodity, it was awesome to see the nice big Sbux napkins stuffed into a dispensor that allowed me to take what I needed and wipe away! (Count that as something I never thought twice about until now.) I expected local pastries, but instead it looked like muffins were flown in directly from Seattle. It was like being in a weird transporter machine where I was beamed home for 30 minutes and then right back to Peru again. Presto! …I admit it, I liked it! 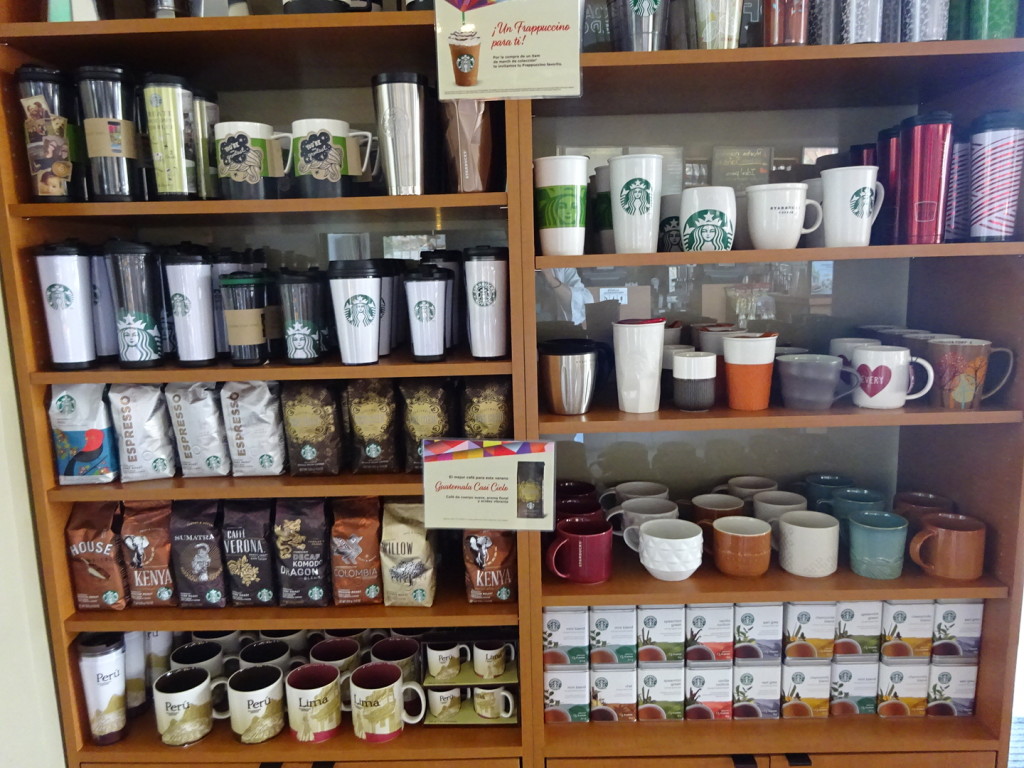 See? JUUUUST like home. Don’t take for granted the Tazo Tea on the bottom. You can’t find that anywhere, and these cost about 15 times what tea in the grocery story (aka what everyone here drinks) costs.

There was a steady stream made up of Cajamarca’s better-off customers. The one employee on the floor did it all with trademark pleasant service and a really excellent (better than home as I remember it) cuppa coffee. He was thrilled to hear we were from Seattle, home of Sbux. He asked me all about the first Sbuxs location in Pike’s Place Market and gave us a few little cookies, gratis. I asked him if a lot of tourists come here and are there more Sbuxs in Peru (yes and yes). He told us tourists like it because it reminds them of home. I couldn’t agree more. Sometimes on this trip, as great as it is, you just want a little something familier. Today we had it!

Author’s Note: We don’t want anyone thinking I’ve lost my Independent Traveler Spirit. We made stops at the few other cafes that Cajamarca offered and just today we walked past Sbuxs-Cusco and right into Cuscoffee (love the name, though the food didn’t live up).

« Cajamarca Mercado: A Quick Post
Carnaval, Day 1: Get Your Paint On »

Leave a Reply to Casey