We know everyone is waiting for a safari post and we PROMISE it is in the works…but while we research adjectives, a final art post from Buenos Aires! 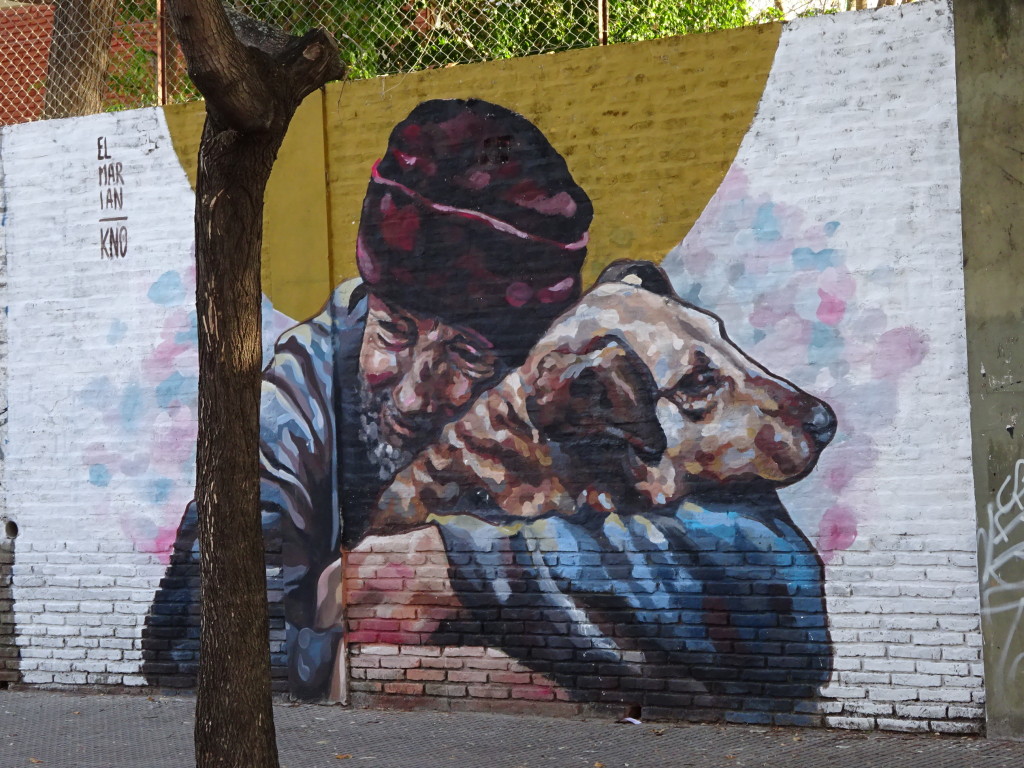 On a school wall between the school and a homeless shelter…the school asked for a painting giving kids a feeling of safety and belonging.

One of the highlights of our visit to Buenos Aires was taking a Street Art Tour of the city with BA Street Art. If you’ve been following the blog, you know I’ve been fascinated by city art before (Cuenca, Panama City, Santiago), but we’ve never had a guide along to give us the history and story of what we’re seeing. Well, Ollie, a transplanted New Yorker graffiti artist, certainly opened our eyes! 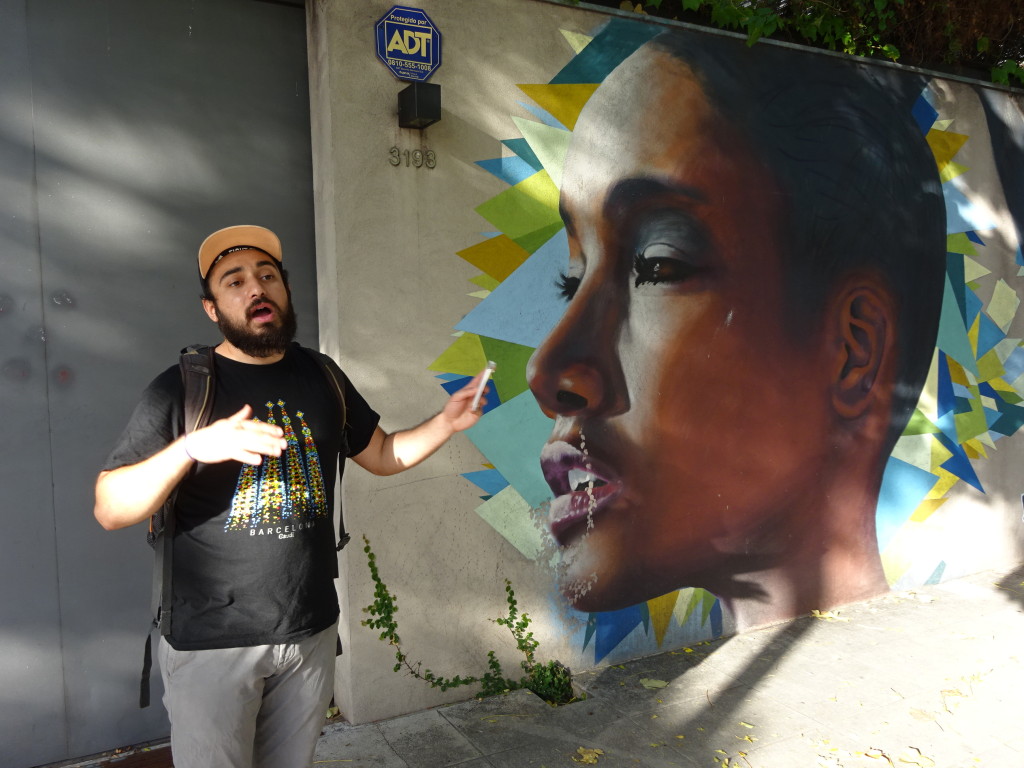 Ollie with a painting by Primo, a pair of cousins who paint mostly faces of black Argentinians for their beauty and as a statement on the slavery many were put under.

First off, we learned the difference between “Street Art” and “Graffiti”. Graffiti is basically what we think of as tagging – spray painting (usually) with aerosol cans of names of people or the gangs they are affiliated with. That’s DEFINITELY the most common thing we see in the US. It can be artistic, but graffiti’s focus is on words. Street Art has much more in common with traditional painting, as it can use oils, acrylics, etc. as well as aerosol cans, with the big difference that it is painted outside on buildings, walls, sculptures, etc. Street Art often takes the form of political messages or opinions on society. 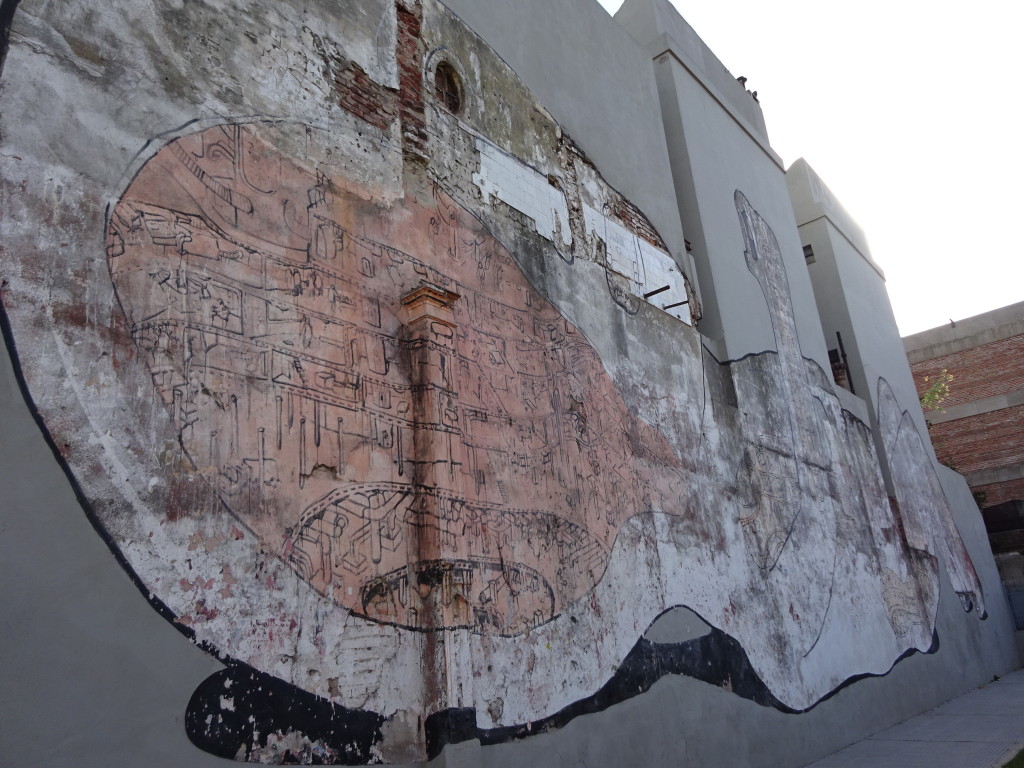 Almost a block long, this piece by Blu gives his take on man being just a cog in a machine of work. 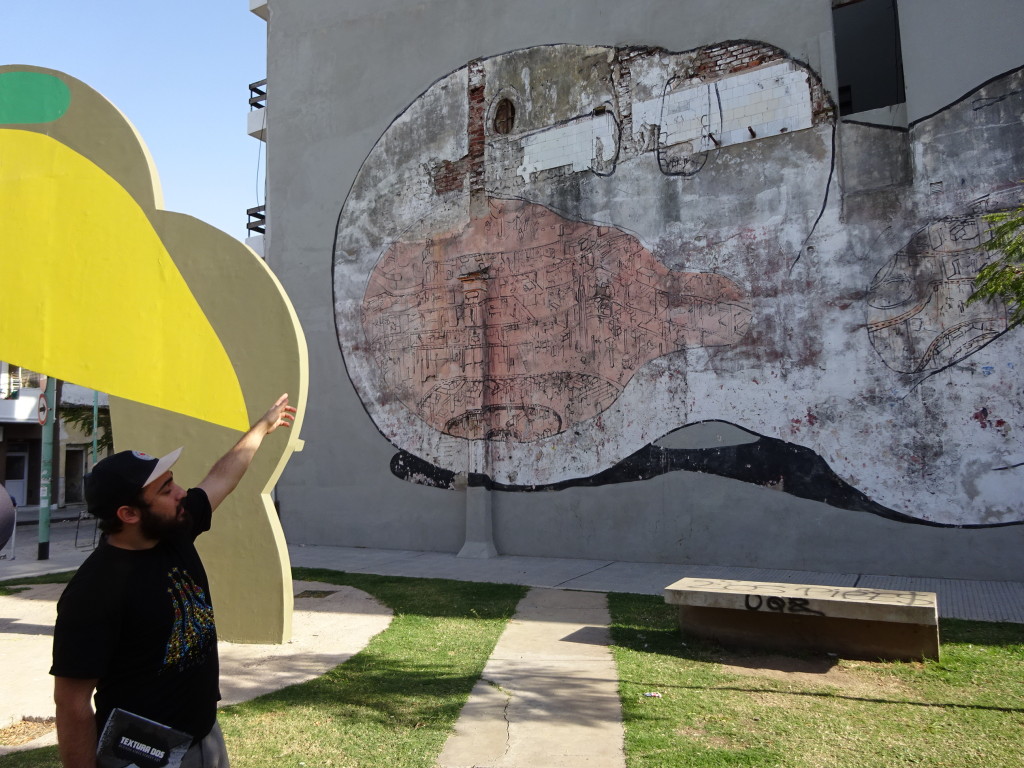 Painted 3 years ago, it is already starting to age. Love that it’s in a little sculpture park in the downtrodden neighborhood!

Of course it can also just be fun! 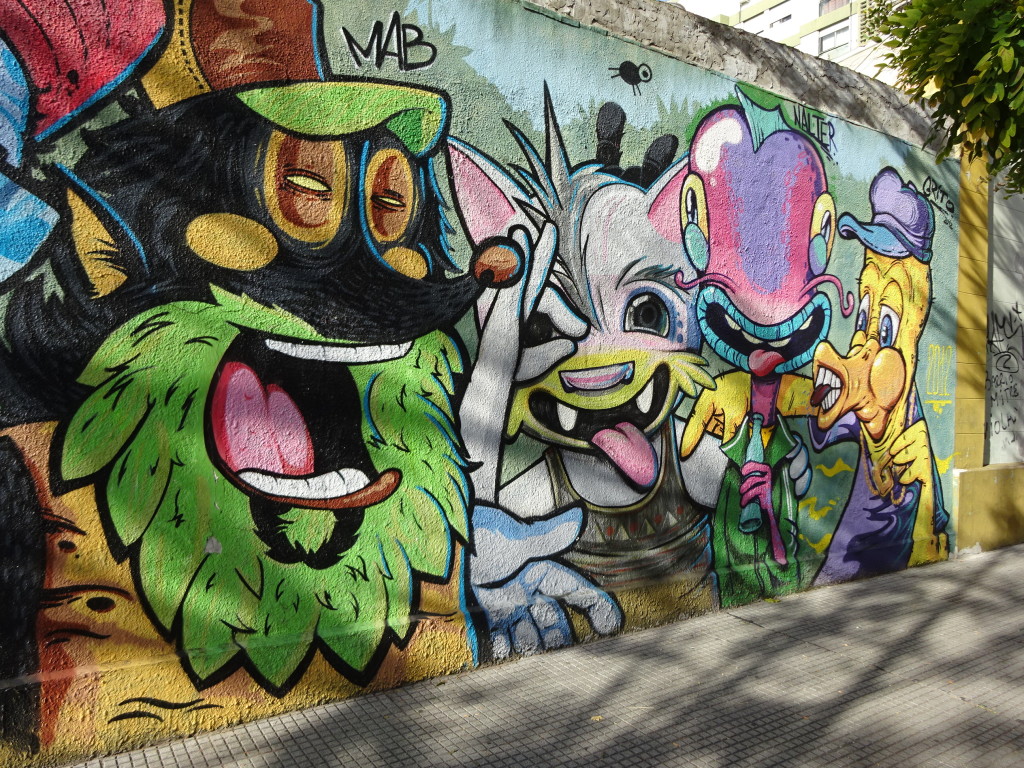 These 5 artists got drunk one night and decided to paint fun, cartoony images of themselves! 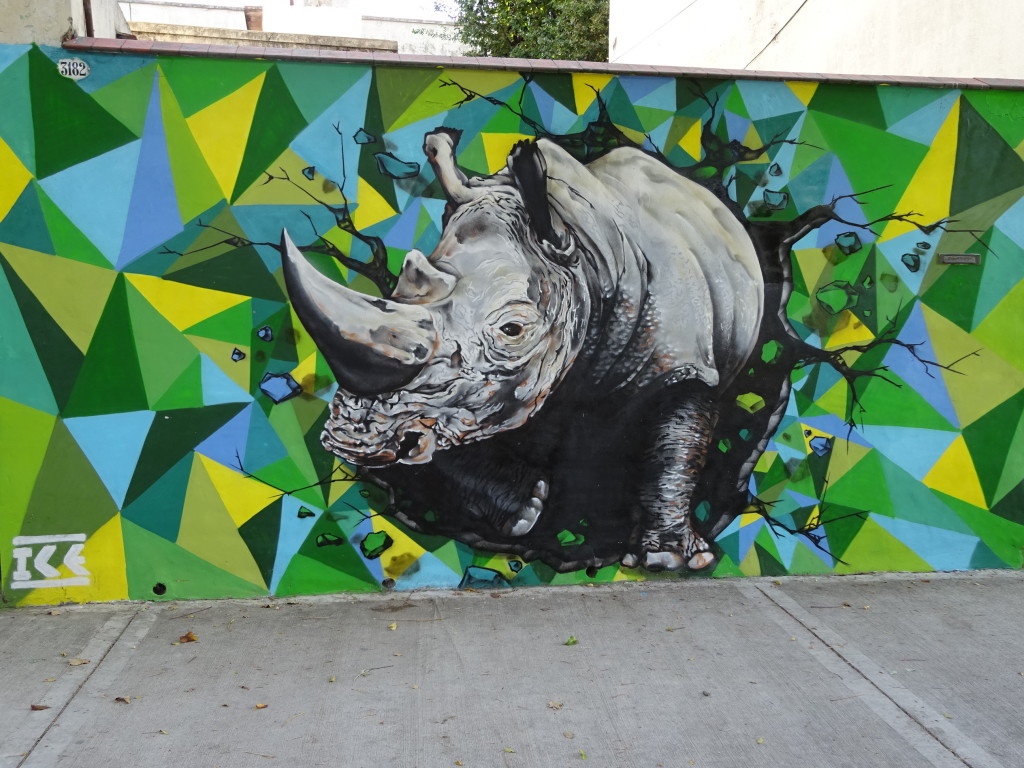 The Rhino Breaks Out! 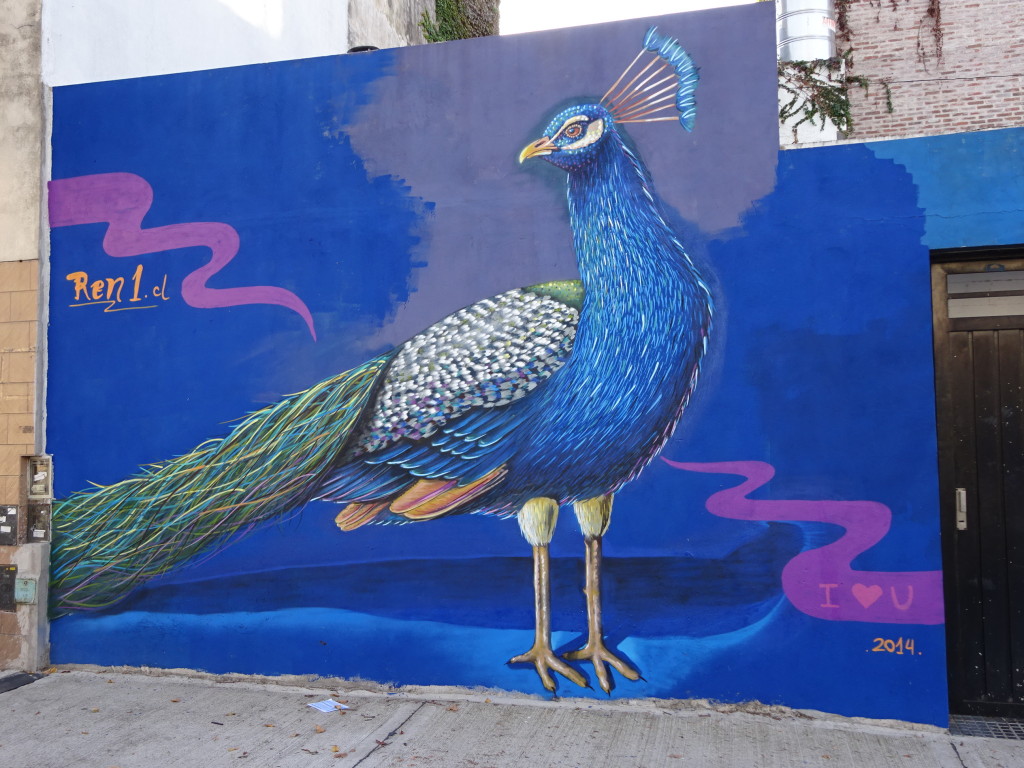 Who doesn’t appreciate a fine peacock like this one by Ren?

BA, it turns out, has become mecca for street artists due to the REALLY lax laws about painting. As long as you aren’t painting on the sides of the new trains (which can run fines up to a few thousand dollars), all you have to do is ok it with the owner of the wall you want to paint and away you go! No neighborhood association rulings here. In fact, quite a few folks try to find artists to paint their walls because if a wall is covered with street art, usually the graffiti artists will respect the art and not tag over it. Well, as long as your art doesn’t support a rival futbol (soccer) team or political party – then you’re just asking for it! 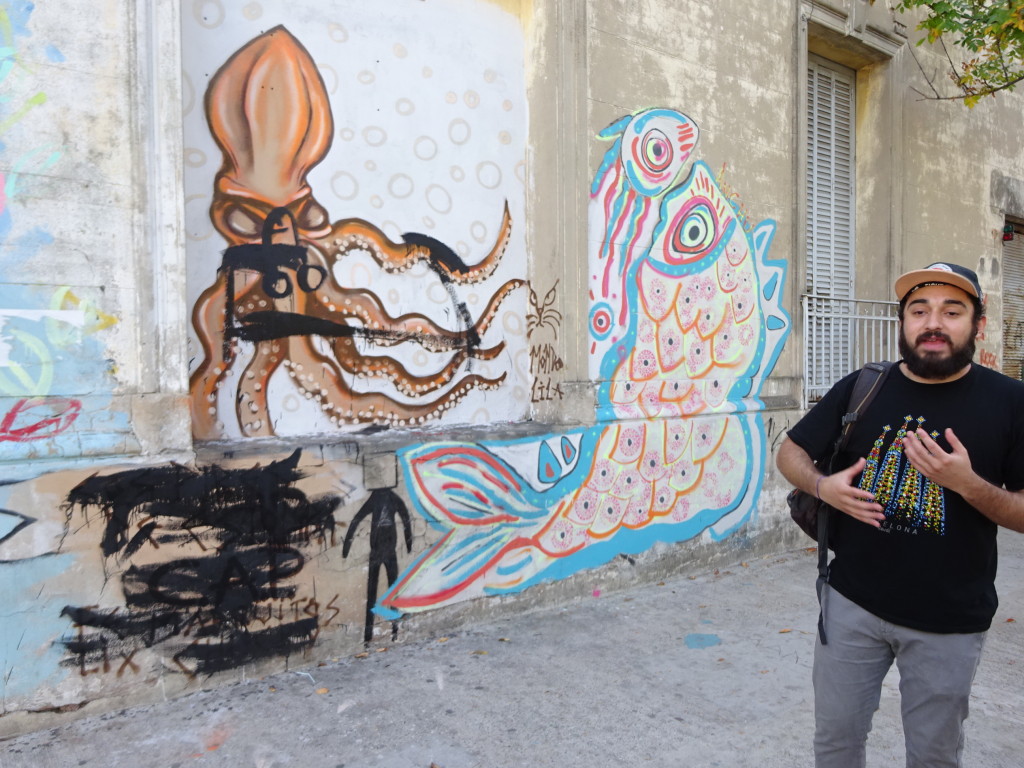 One of the few pieces we saw that had been defaced. (by Motido and Anchu) 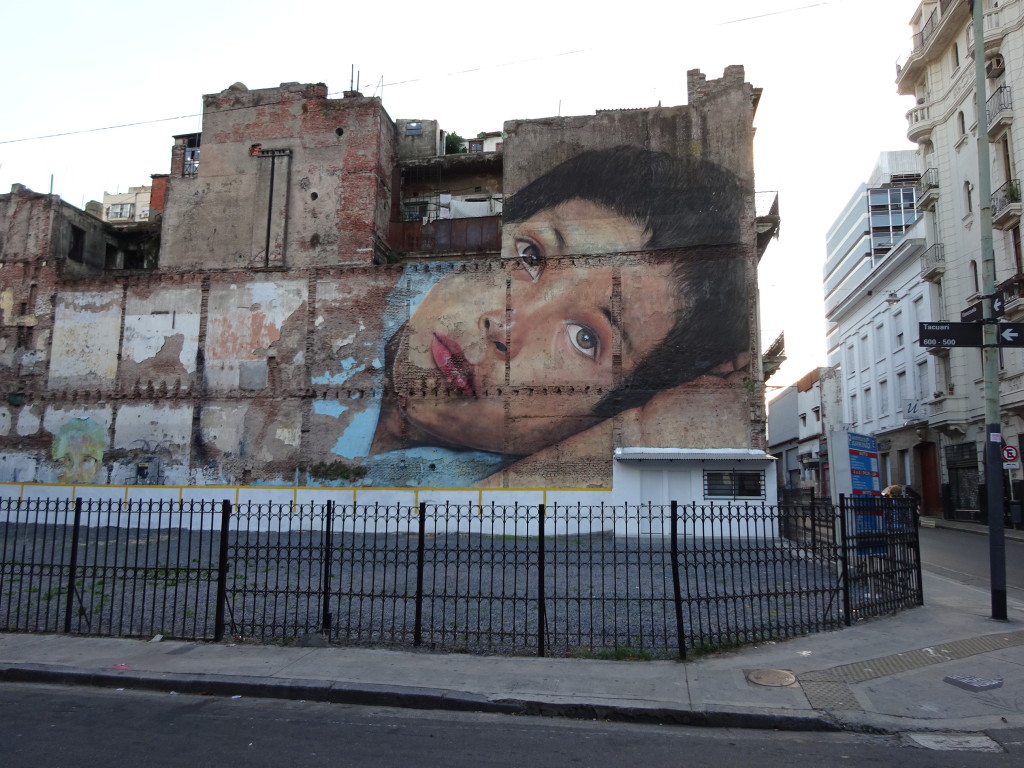 At 2 stories high and a block long, this one took about 5 days.

– occasionally the building owner will pay the artist some amount (rarely much more than the cost of the paint), but usually it is done at the artist’s expense 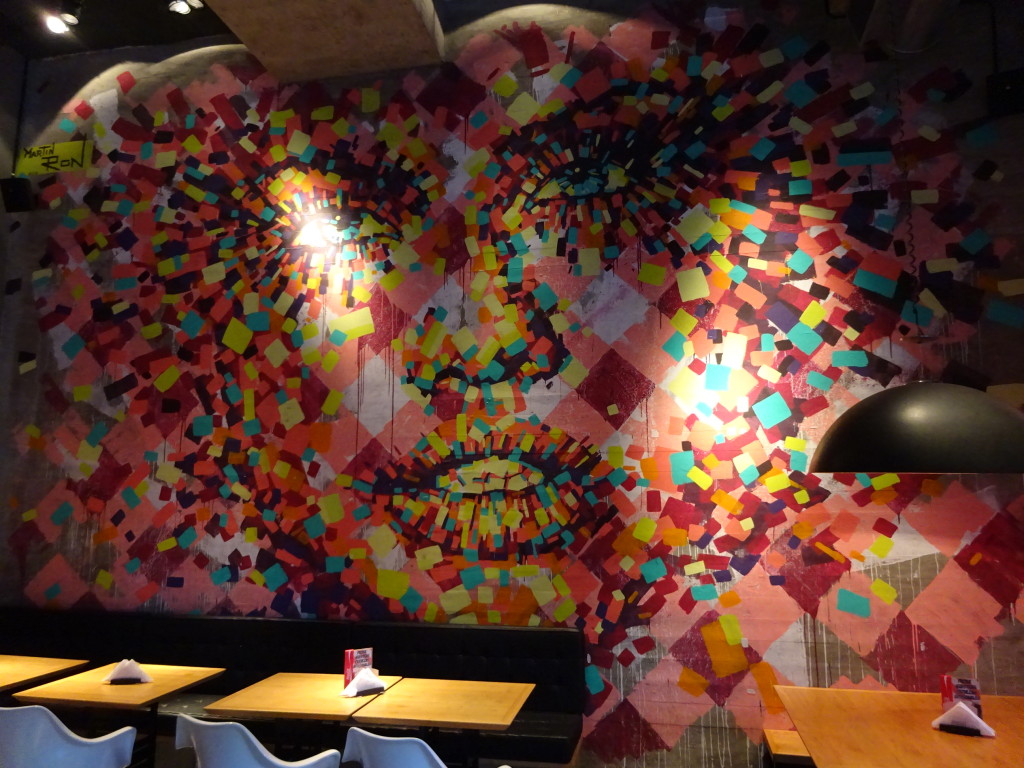 Inside a restaurant, this one was paid for, I believe. 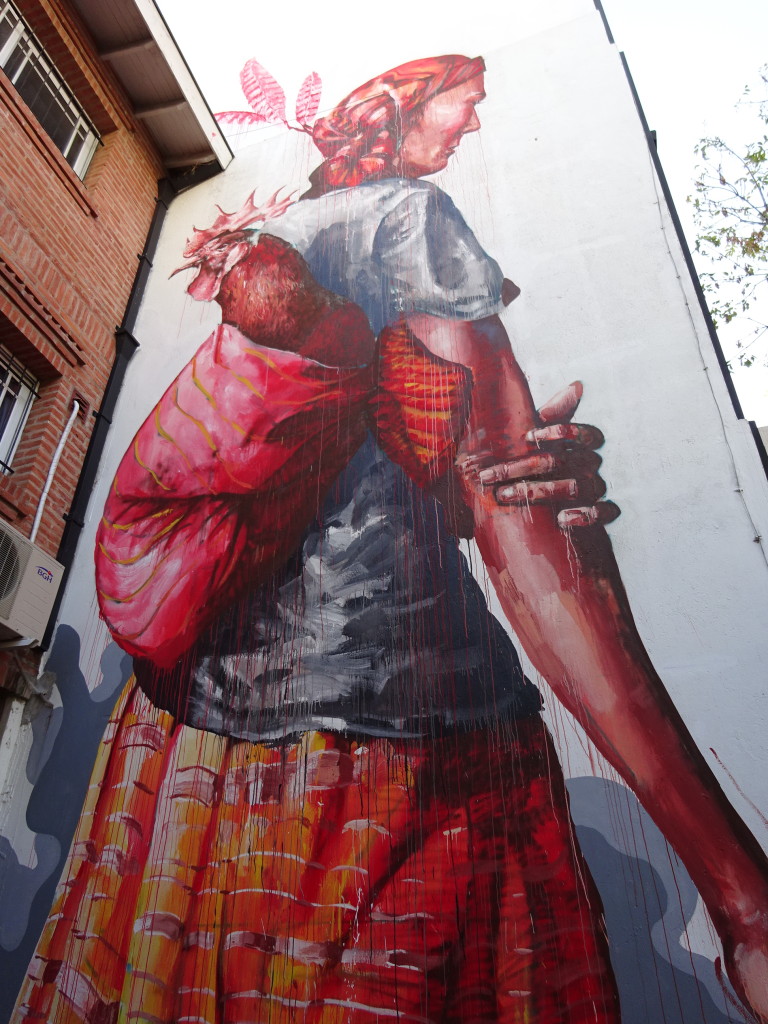 – rarely do the building owners have much say in what gets painted! They can ask, but it’s really the artist’s vision. 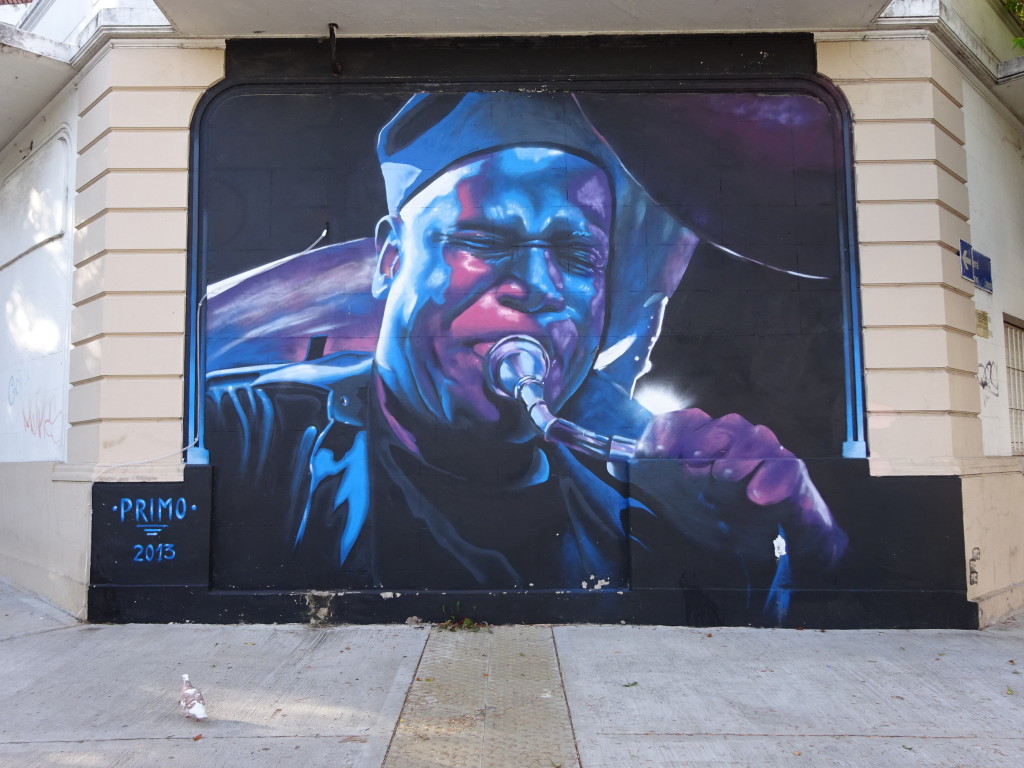 On the side of a music school. Absolutely mind-blowing what can be done with spray cans! 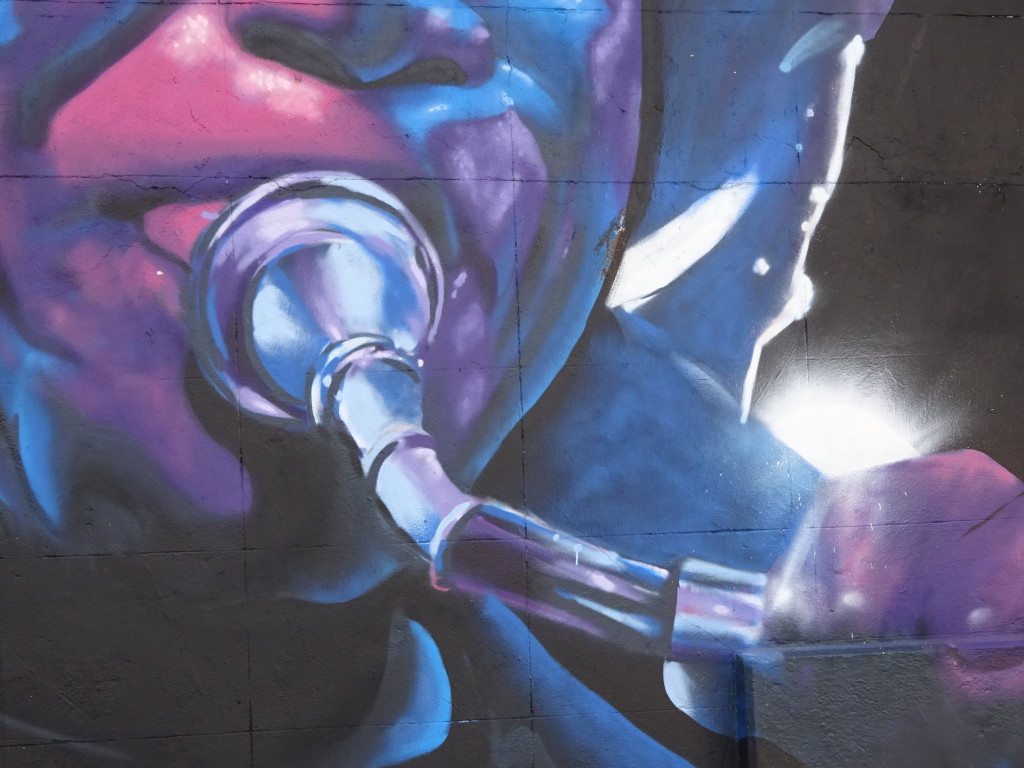 Look at the detail! (by Primo)

– rarely will street art get retouched if it gets damaged. The artists accept that their work is relatively transient…quite different from traditional artists who, I think, imagine their work will last and last. 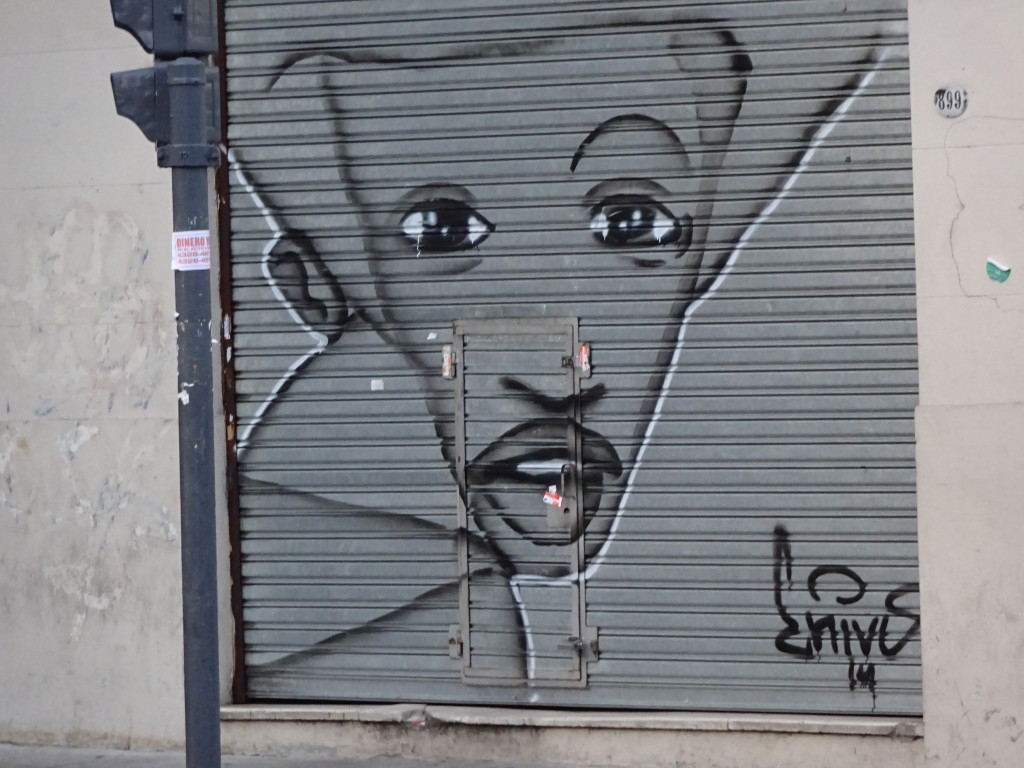 – pretty common for the artists to sign their work and include a contact via email or facebook! It’s a way to get known and to solicit commissions. 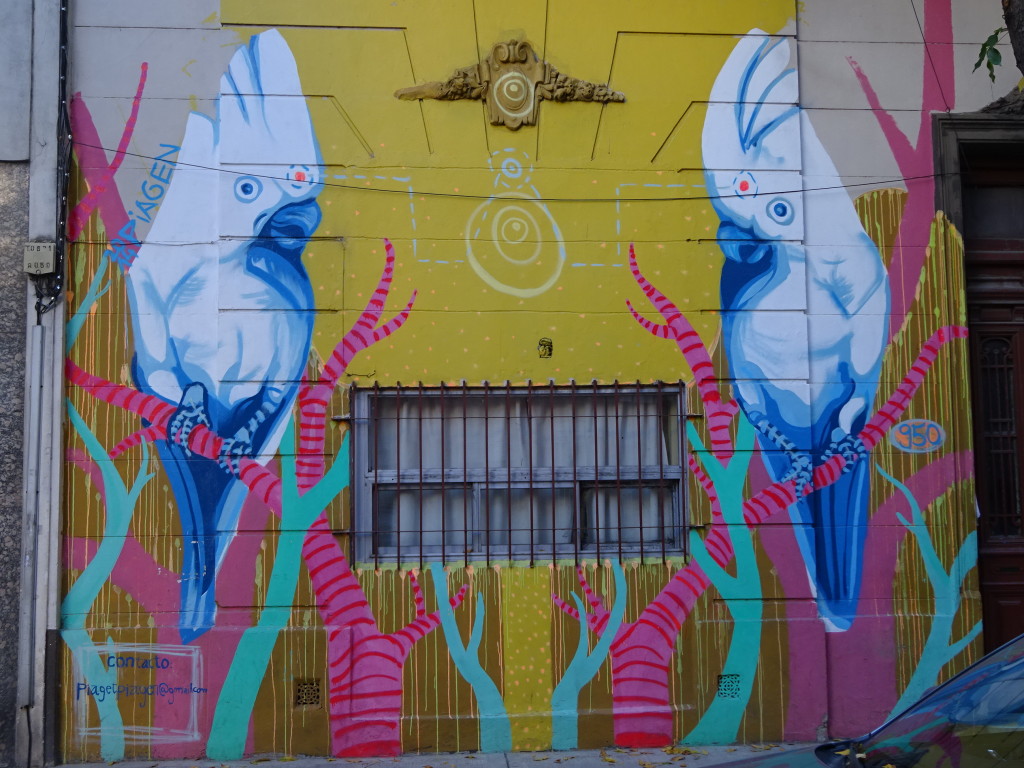 Parrots. If you look at the bottom left, you can see the contact info for the artist. 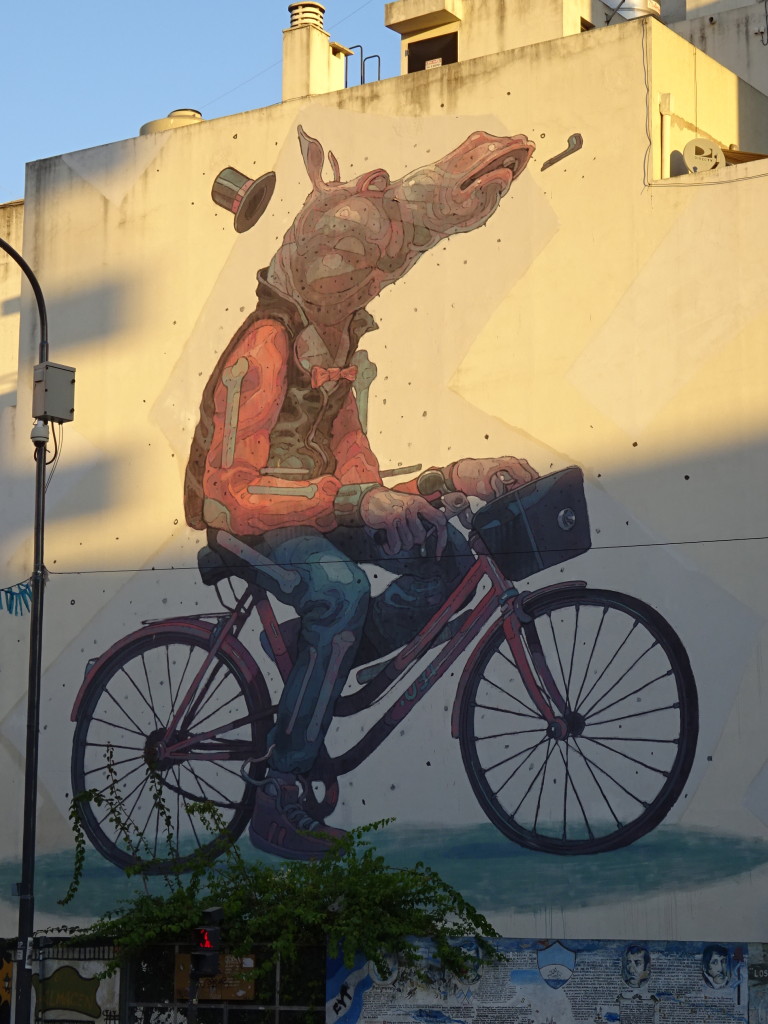 Just fill those walls with art, please! Thank you! 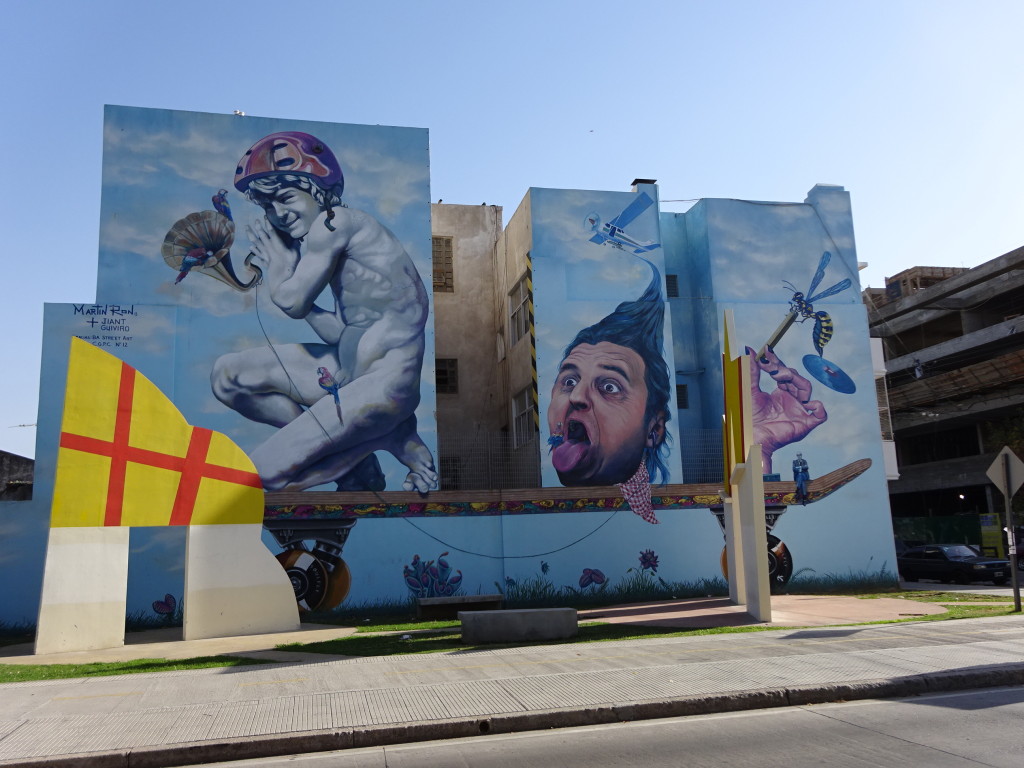 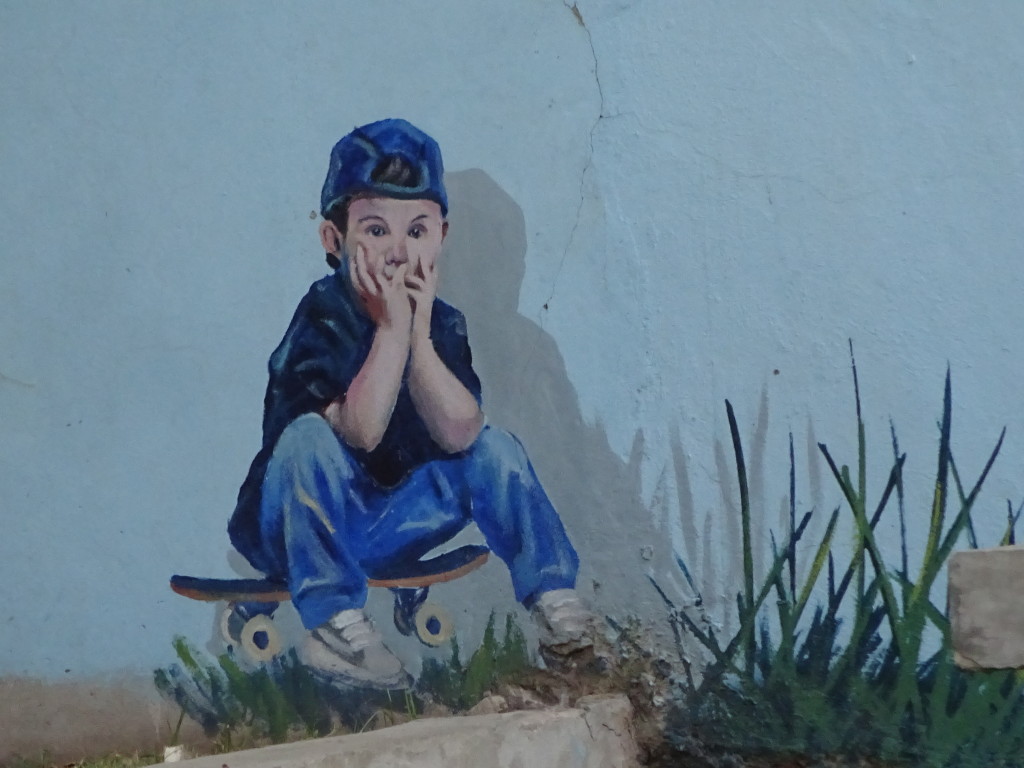 Detail of Martin Ron’s mural – this boy came by to watch while Martin was painting, so he just added the boy in! Those are the kind of stories we heard on the tour that we would never have known on our own!

Now a few more pieces that caught my eye – some on the tour, some we just found wandering. 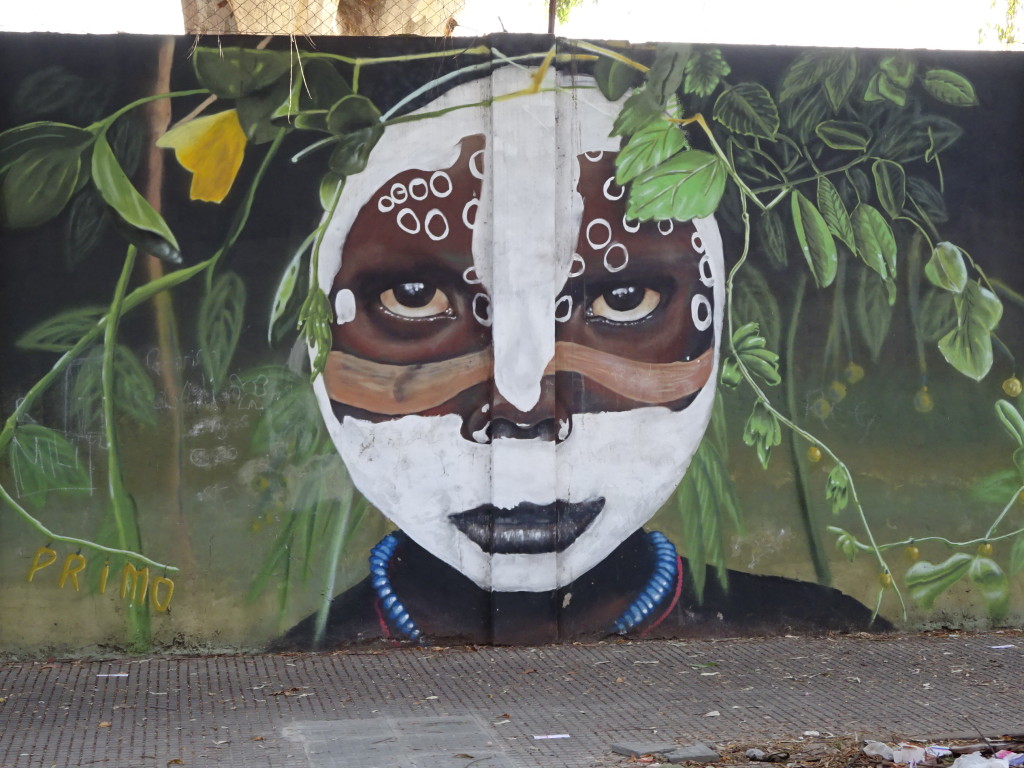 Another piece by Primo. 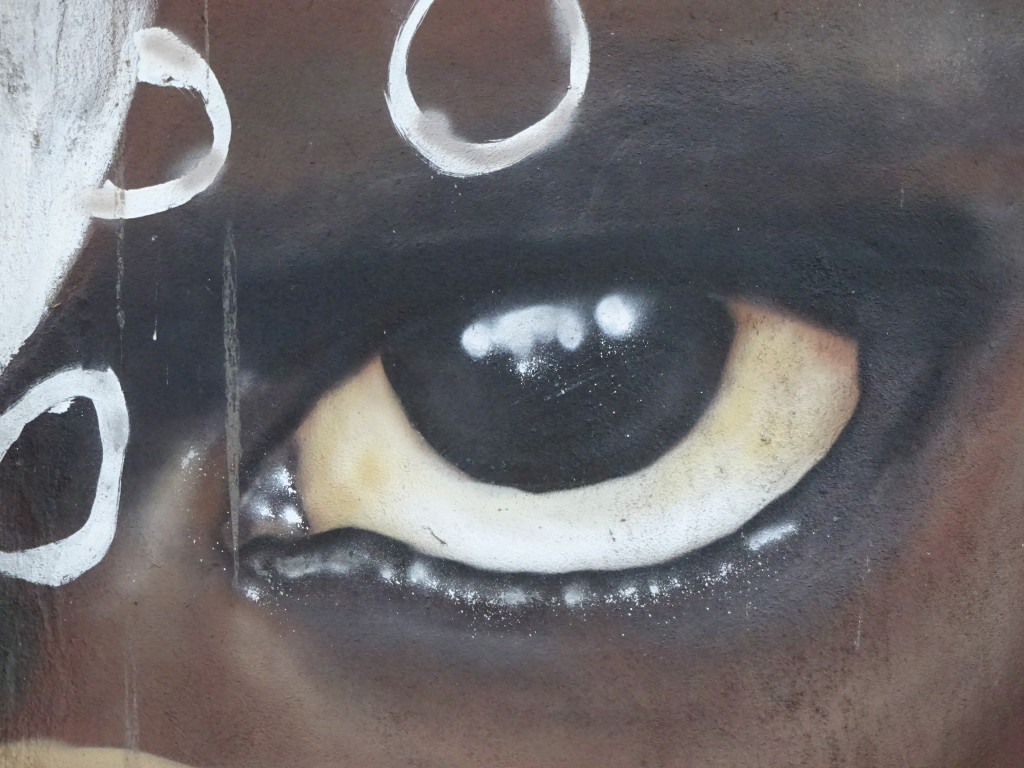 The eyes were incredible! All with aerosols… 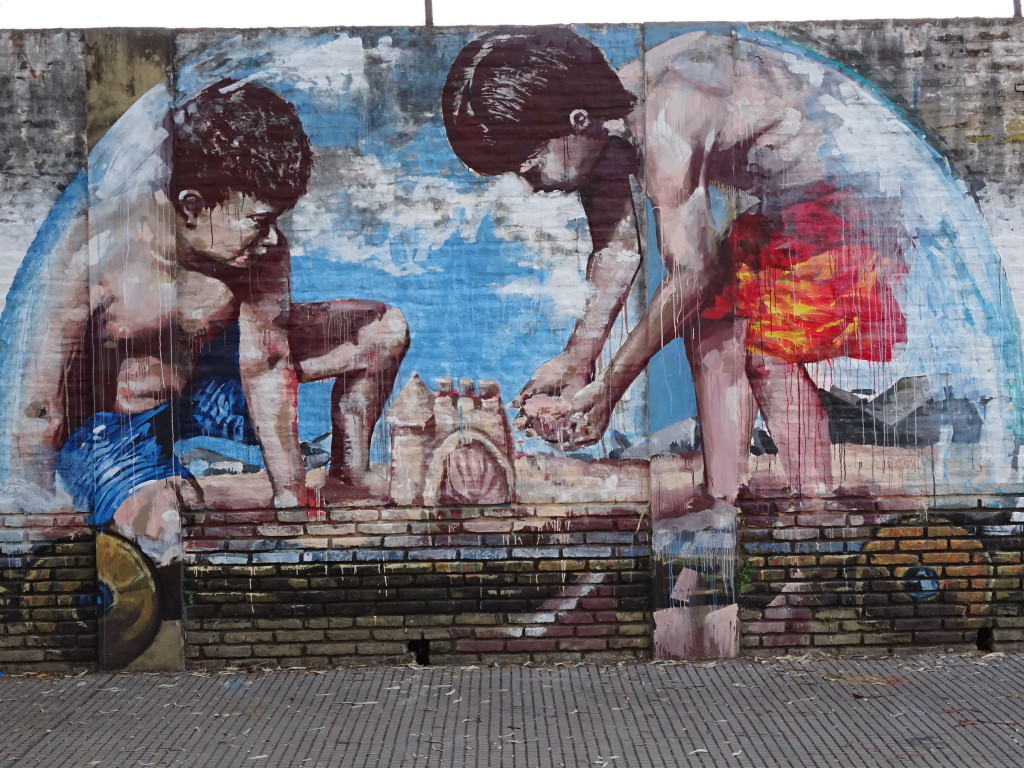 Another piece on the school wall – boys playing in a protective dome. 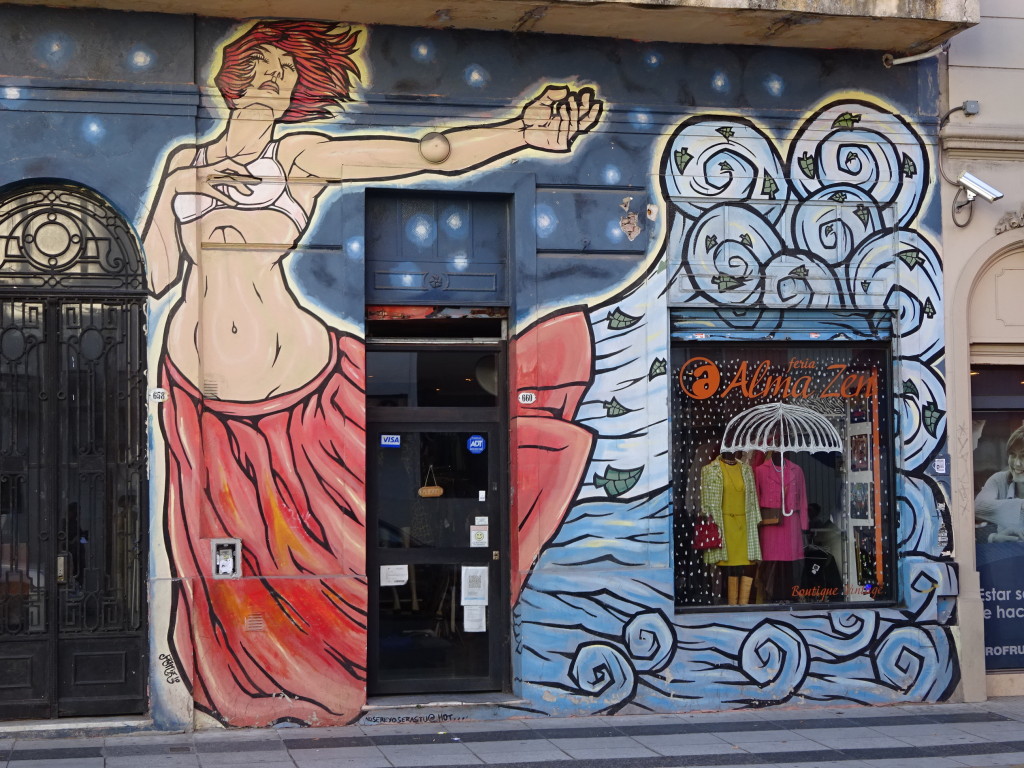 Stumbled across this one around a store and our jaws just dropped. 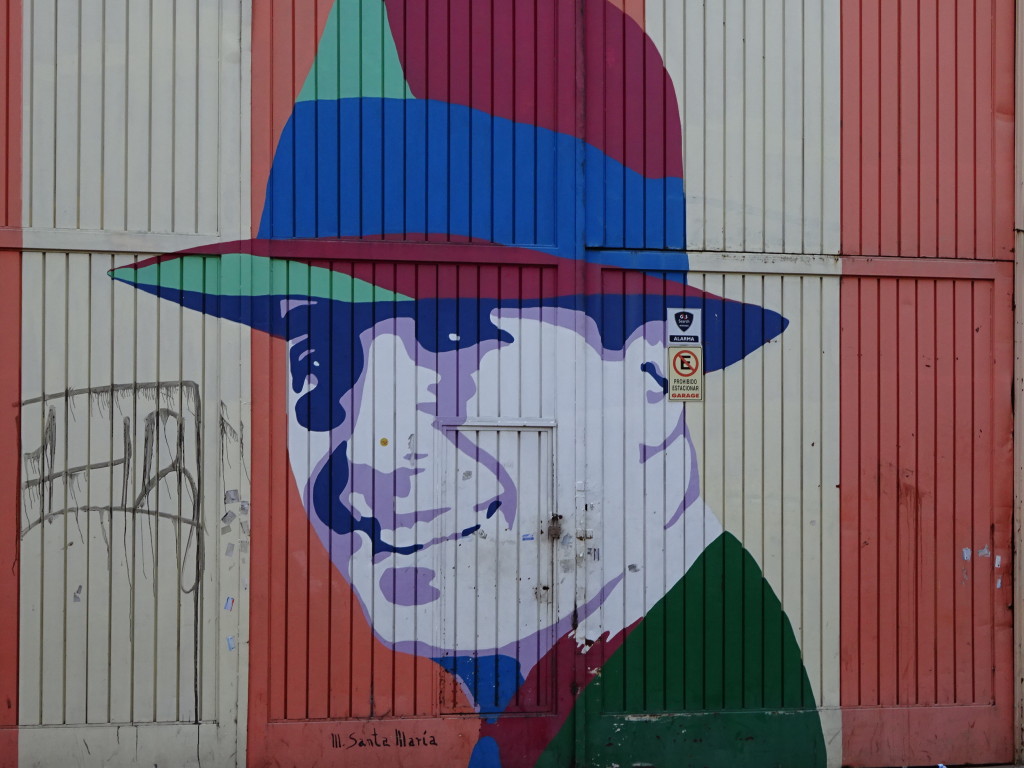 One neighborhood had a bunch of pieces showing Carlos Gardel, an old star of tango dancing! 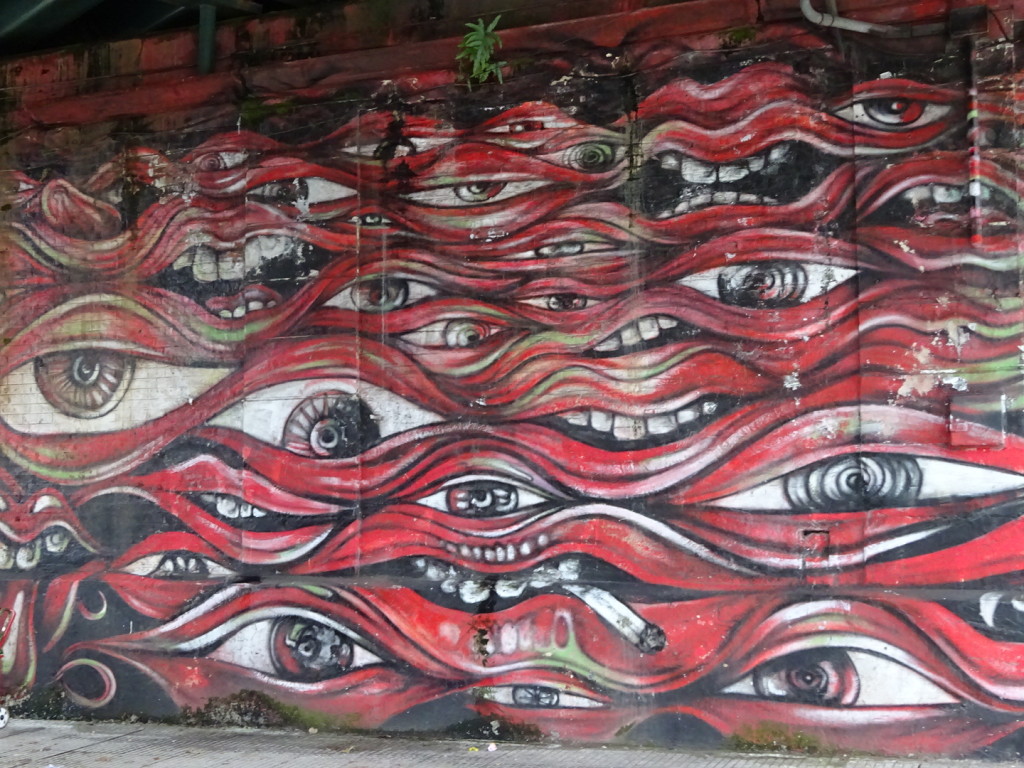 The eyes have it! 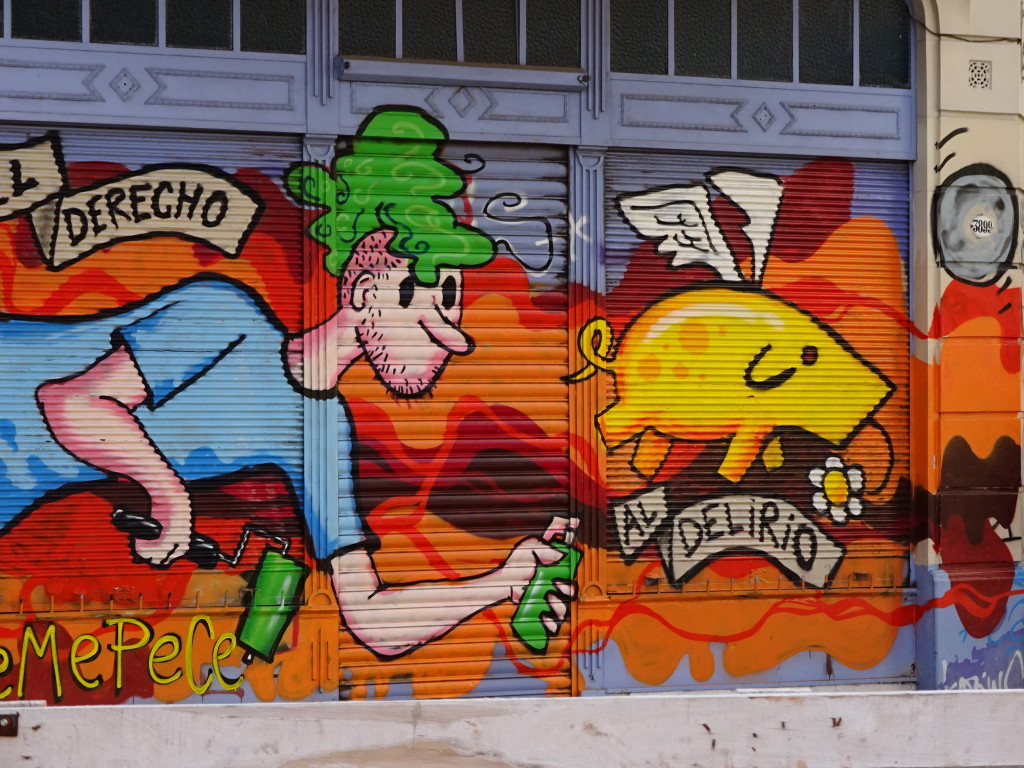 Flying pig, anyone? (by Oveja) 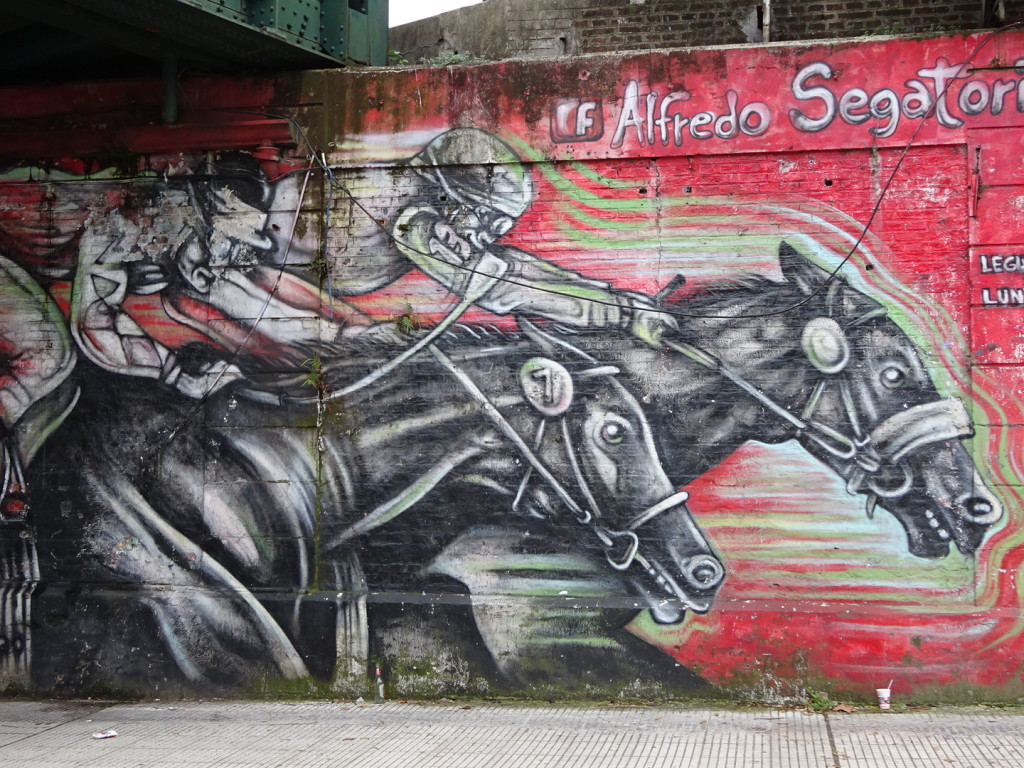 Outside the horse track… 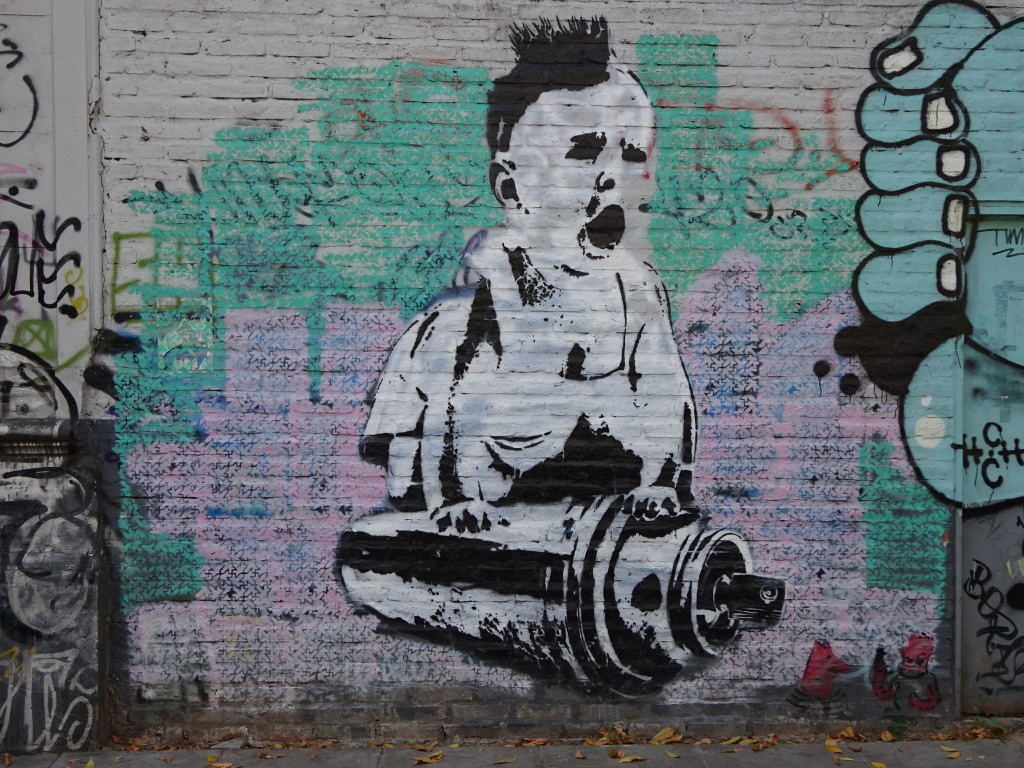 What could be more iconic to end things with than a punk baby on a spray can???

And there you have it – my final art post from the Americas. Can’t wait to see what Africa brings!

« What it Cost: Argentina
First You Have To Get There: Africa in 57 Hours »