Walking into the unfinished church, we were ushered to the front and asked to individually greet every person there. Only knowing about four Swahili phrases, this wasn’t as easy as you might guess! How’d we find ourselves in this position, I hear you thinking. Well, there-in lies a tale. 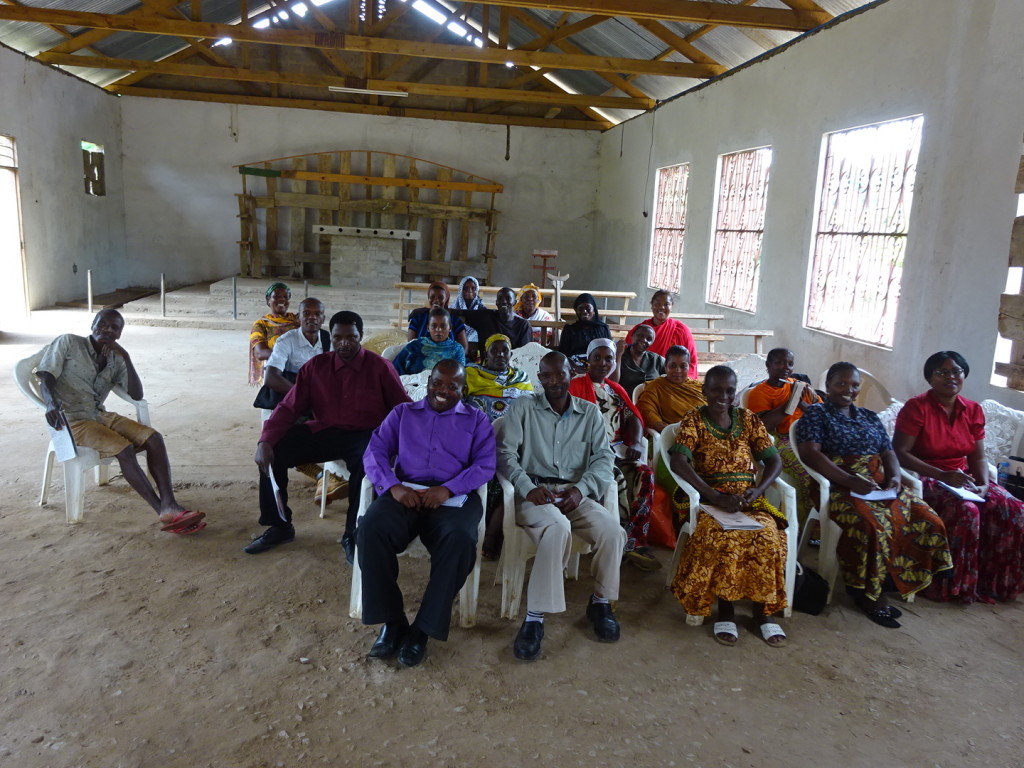 Class is now in session….what have we gotten ourselves into?

In Tanga, a few days earlier, we had told our guide, David, that we love learning about local crafts and meeting artists while we travel. He thought for a moment and then informed us that there was a batik class coming up in Amboni, the next village over. Sounded amazing, so we said to sign us up! Turns out “batik” is actually what we call “tie-dye” and the “class” was the final practicum day of a four-day entrepreneurship seminar organized by the local church! The seminar’s goal is to teach the participants different saleable skills including soap making and mushroom growing, along with the tie-dying – fourteen in all. After greeting everyone we found ourselves sitting in front of the class as the organizer read a proclamation stating that we were now “matron” and “patron” of the seminar. A bit unsure what that might mean, we just went with the flow and ended up taking part in one of the most powerful days of our trip so far.

We were warmly welcomed and quickly assigned to a team to start our tie-dying projects. Material was handed to each student based on how much tuition they paid. We asked to purchase our own piece of cloth, but were told that the class wanted to give us each a piece of fabric. Ironic that the people who have the very least, give the most. Amboni is a small village with mud huts, outdoor bathrooms and no electricity. The hope is that the students can use their new skills to sell products to improve their economic status. It seems that their best chance of that would be to find a tourist market in Dar or Arusha as the locals apparently don’t trust things locally made and would rather pay extra to bus to town and buy in stores! 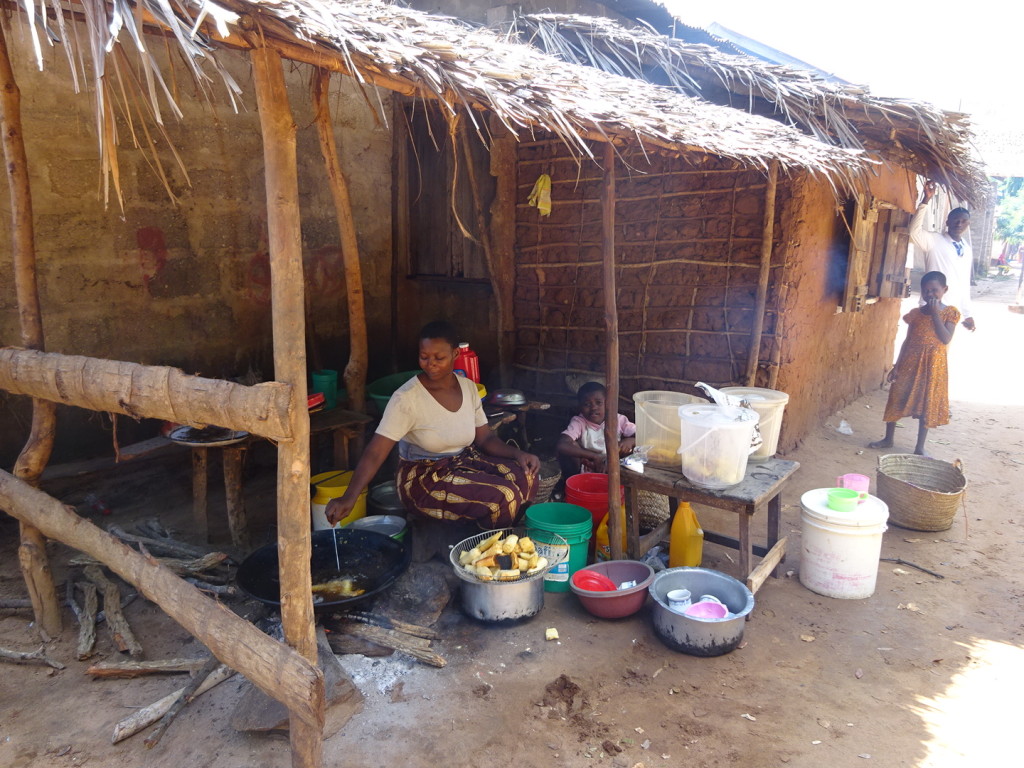 This cafe is in Amboni Village. Little children stop here for a snack during school. See the little girl in pink sitting there? 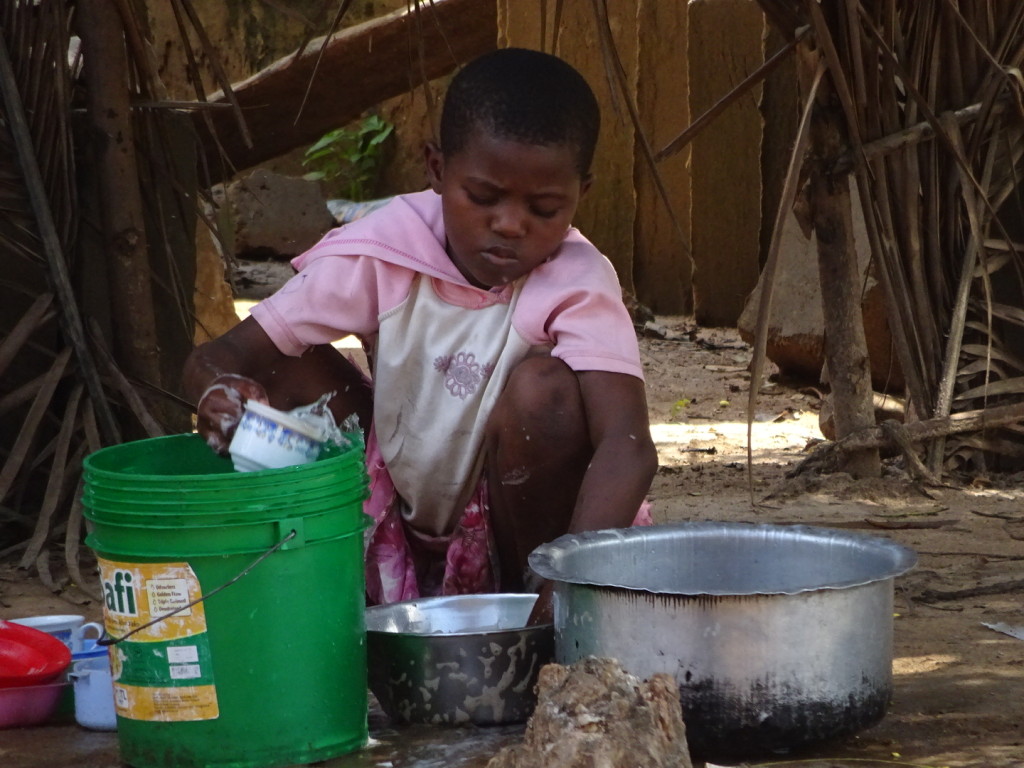 Amboni is this kind of poor. Here she is washing dishes instead of going to school. Moments earlier she was using a knife the size of her arm to peel vegetables with incredible speed.

We spent the entire day with the class. Though there was a major language barrier, big gestures convey a lot! Big smiles say even more. We were moved by the seriousness with which the class took the lessons. It’s apparent their futures could depend on it, perhaps most especially for several participants with serious physical challenges who met the course with the most gusto and joy.

Once assigned to teams, the class was eager to see our folding and tieing prowess. It was harder than it looked, and the folding process is very precise – which is more Aaron’s thing than mine, but we both caught on. They chatted amongst themselves while watching us fold. One of the bi-lingual students leaned over, “You know what they say? You white people very clever! You fold very good!” Why thank you! When one of us successfully folded the fabric the entire class cheered, “lululululul”. Not wanting anyone to miss out on the accolades, we were sure to start the cheering whenever a student completed a fold. Such high energy!!! 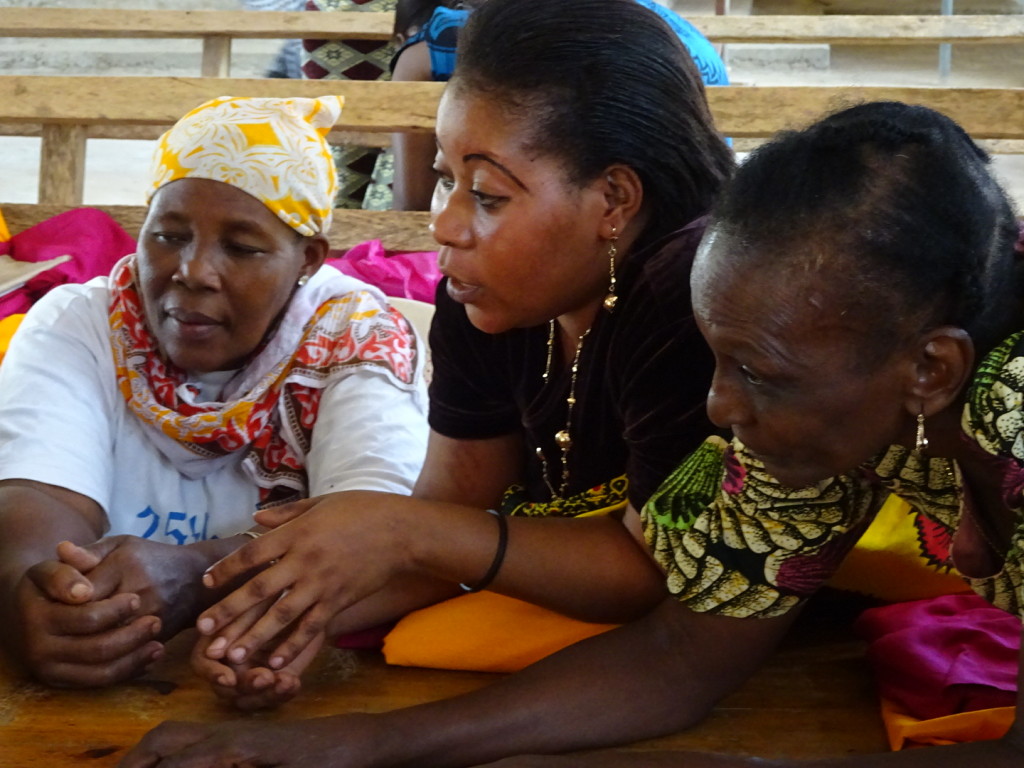 Everyone leaning in, helping and coaching the person folding. 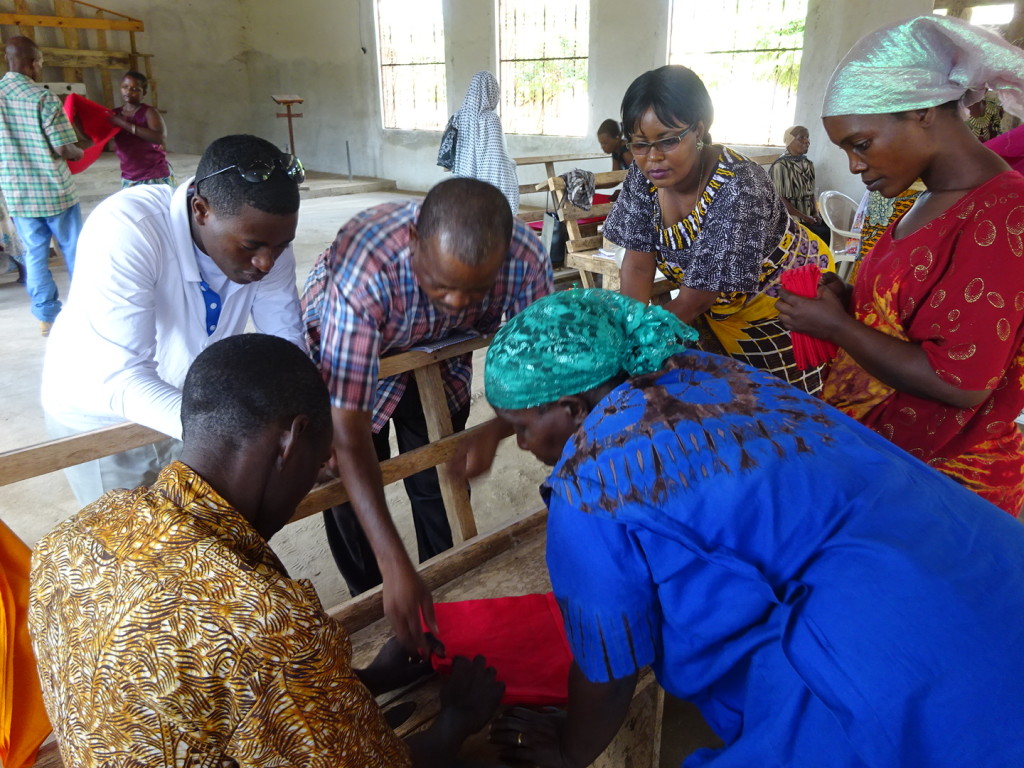 I love the intensity – EVERYONE paying full attention while one person attempts a new fold. 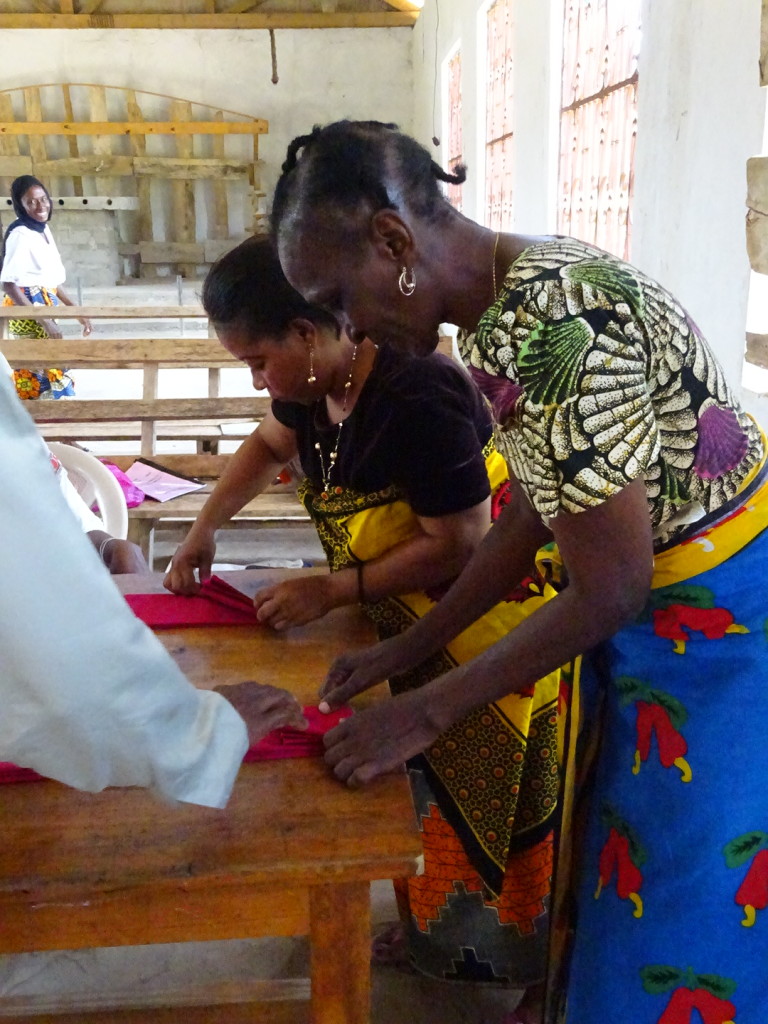 I was on a team with these ladies who were so incredibly kind and helpful. 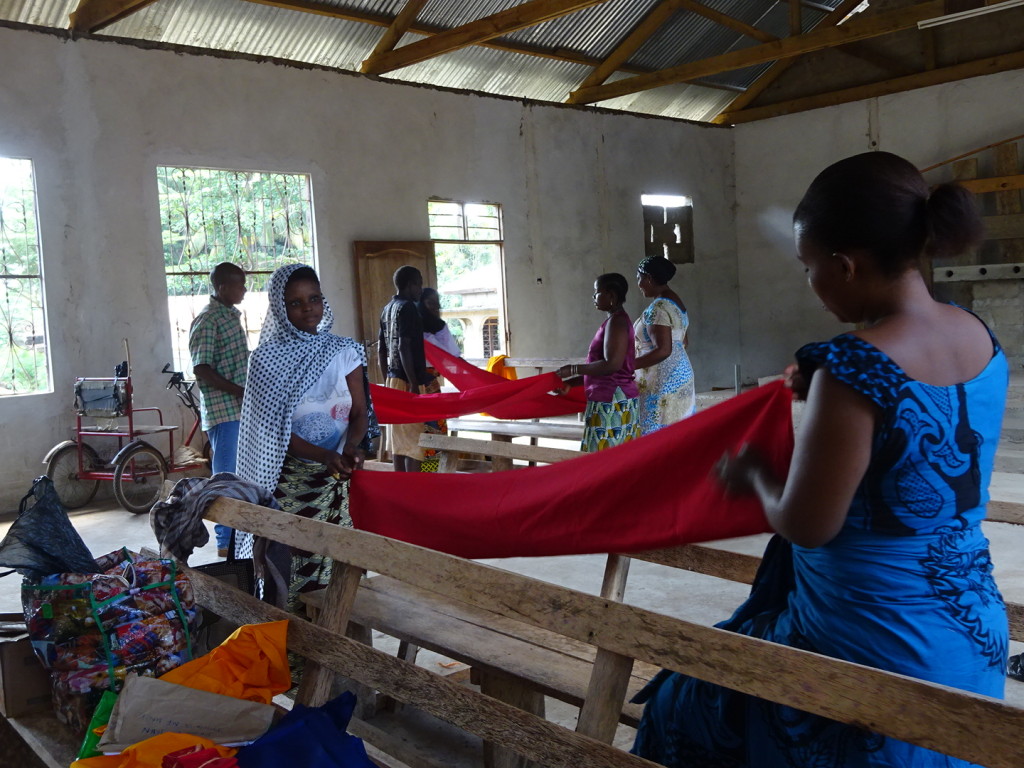 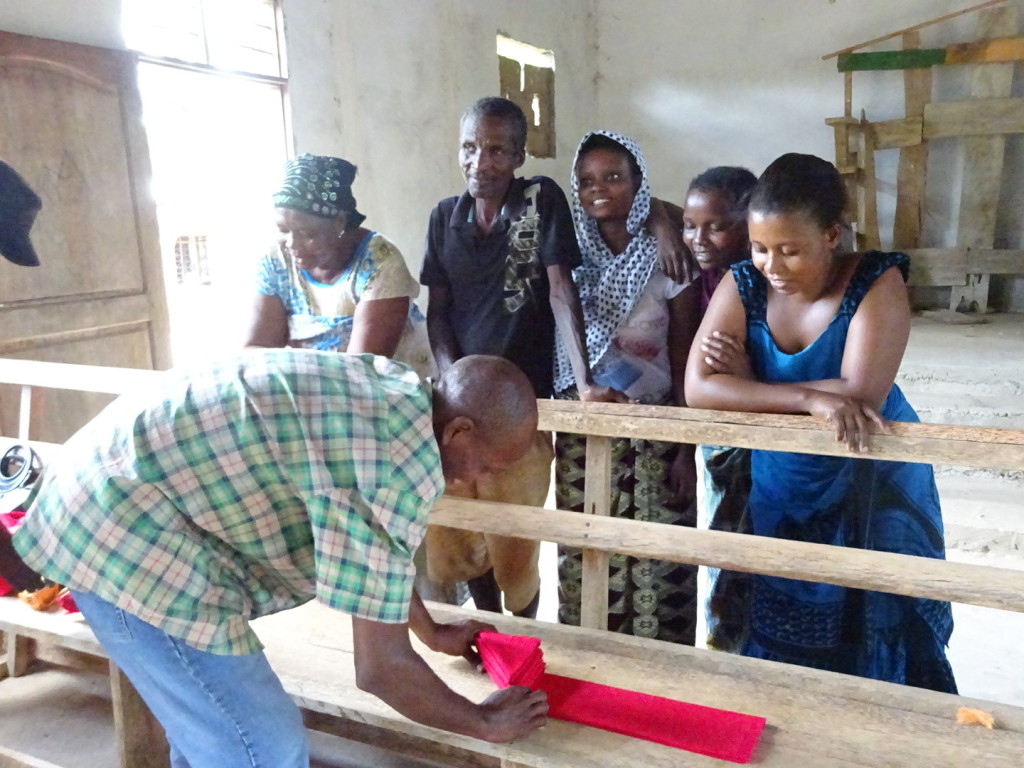 Our guide David, under the careful watch of his team! 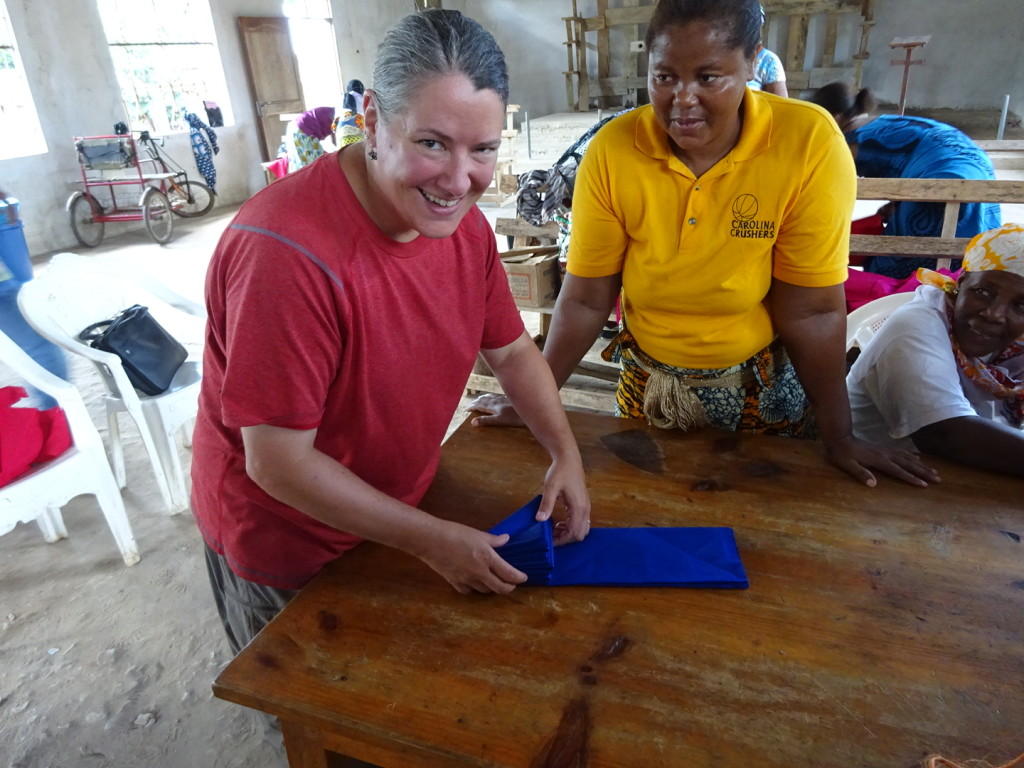 Getting a lesson in fabric folding. The triangle is called “sambusa” after a triangle shaped food here in TZ.

Throughout the entire day instructors, organizers and students would yell, “Camera! Camera!” and one of us would come running to document the exact step at hand. It was one of those days where we just wanted to bottle it up and save the good feelings…taking 300 pictures and videos was the closest we could get.

We all headed outside to do the actual dying… which was mostly watching the instructors…, but everyone listened intently while one of the students read out the procedure from his notebook. It went on all afternoon and into the early evening. In-between dying lessons there was a soap making lesson (also harder than it looks.) 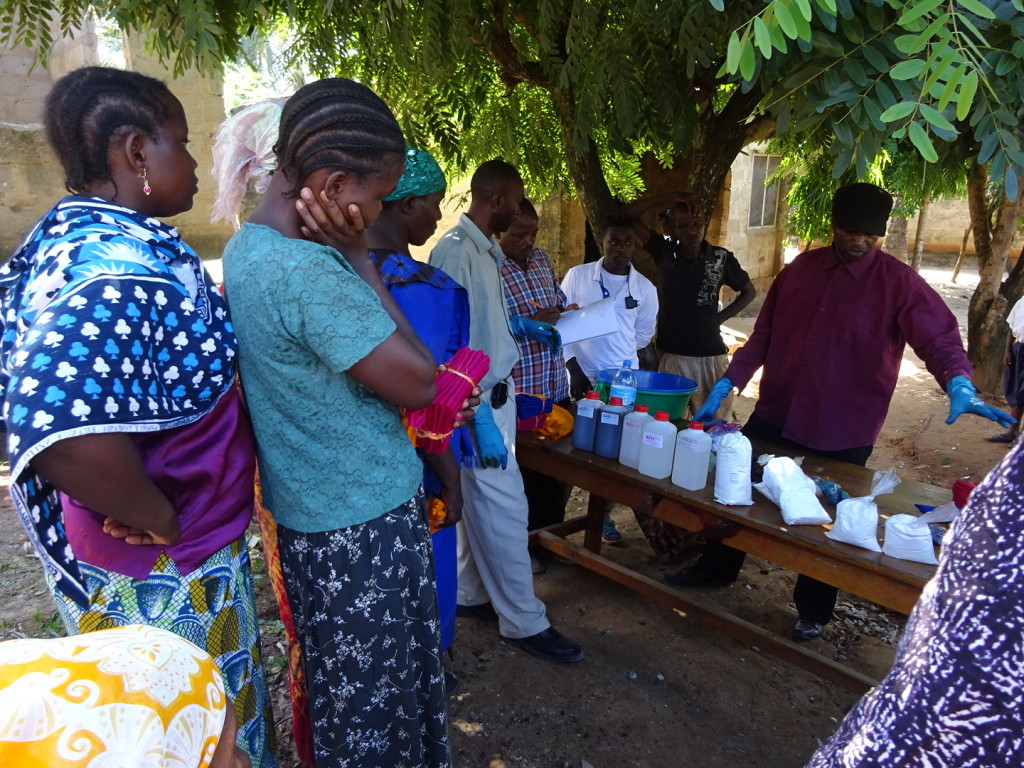 Everyone gathered round to learn about mixing dye. 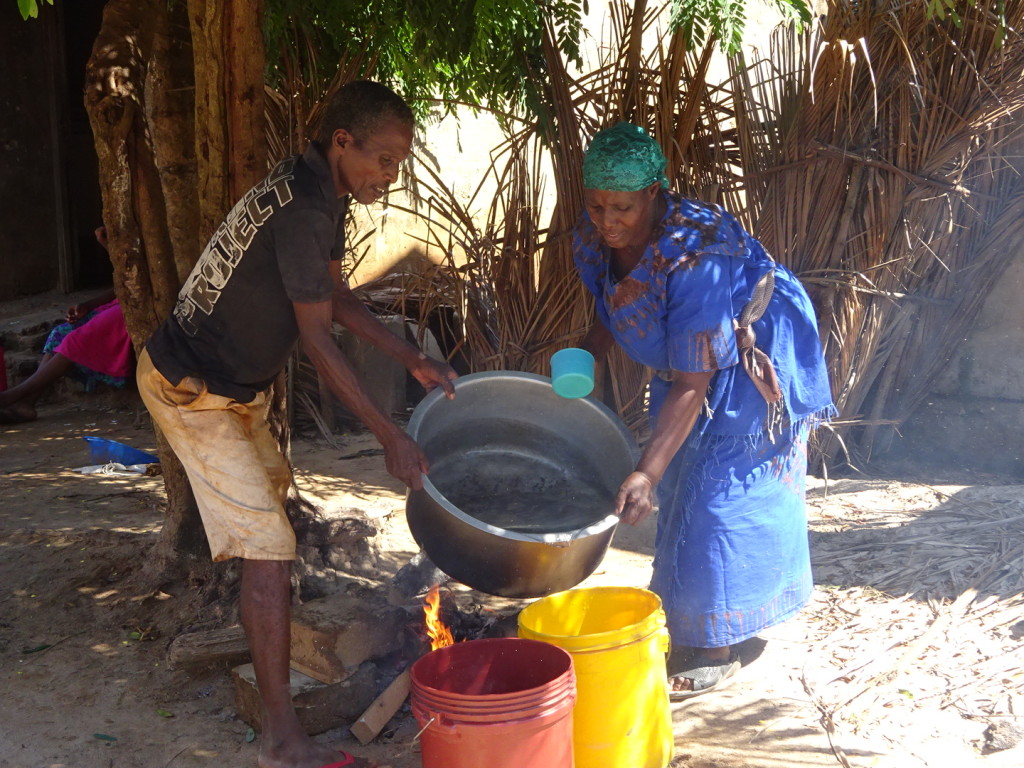 Heating water over a fire to set the dye. 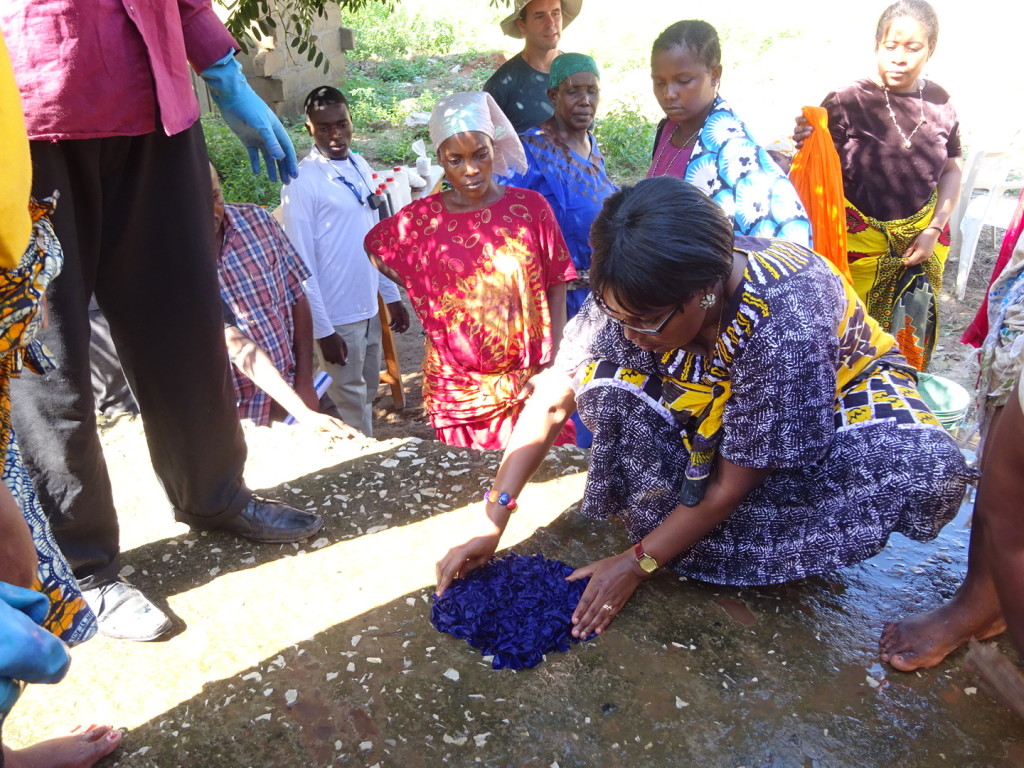 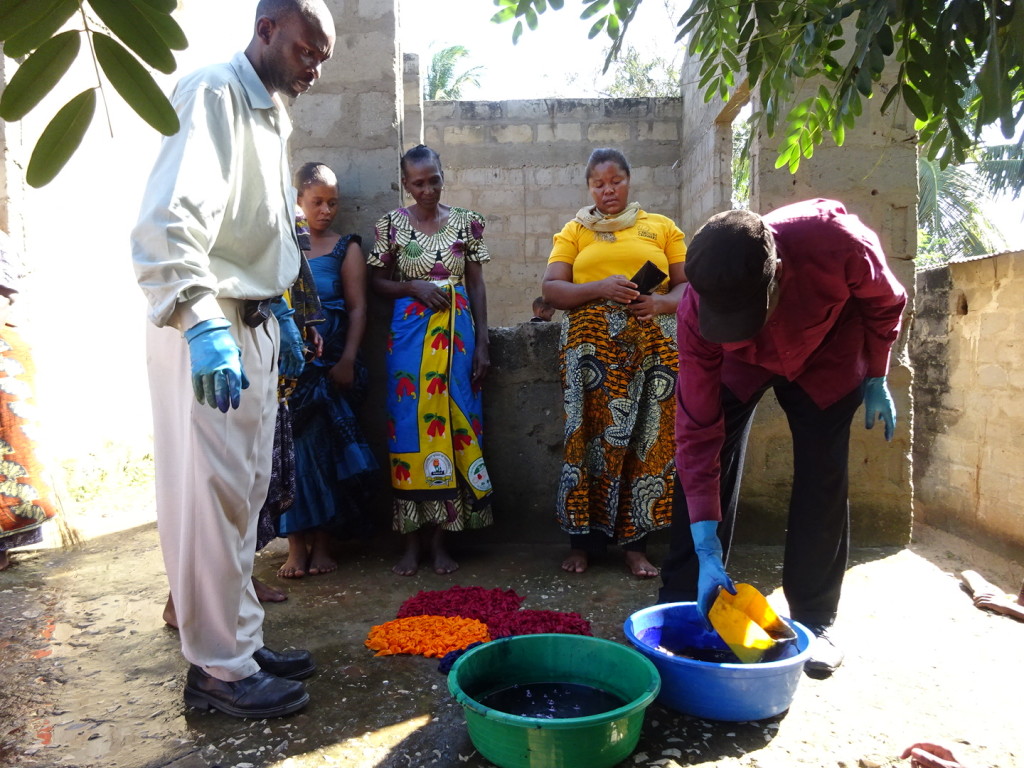 Learning a new technique where the fabrics are crumpled on the ground and the dye is dribbled onto it. 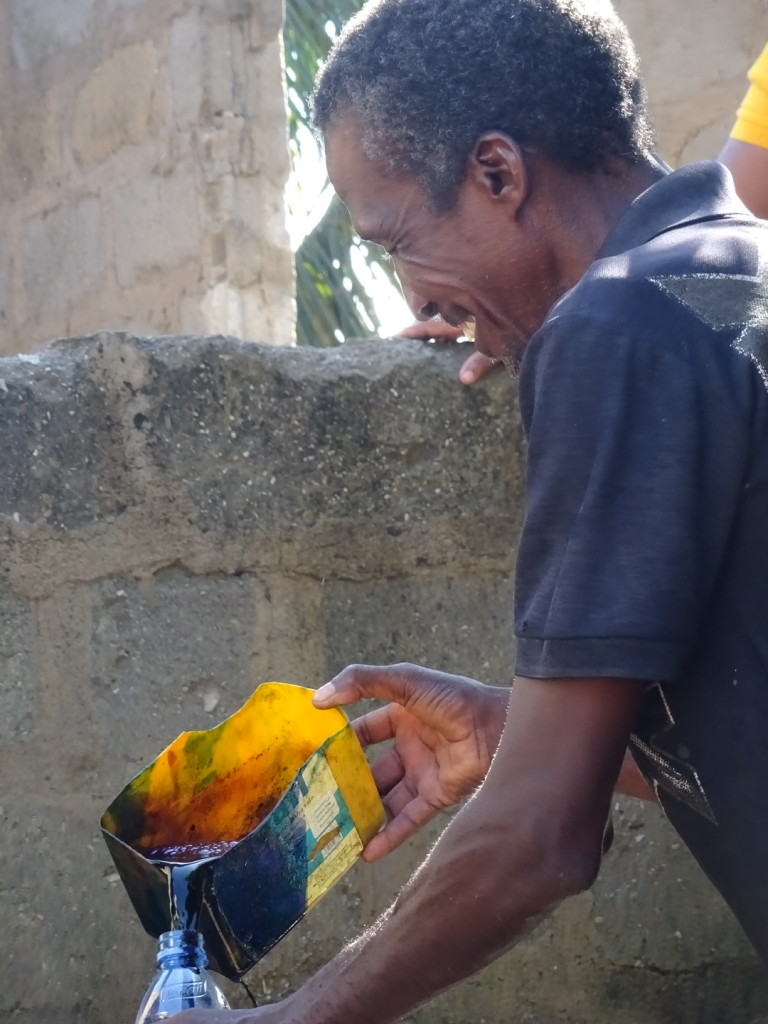 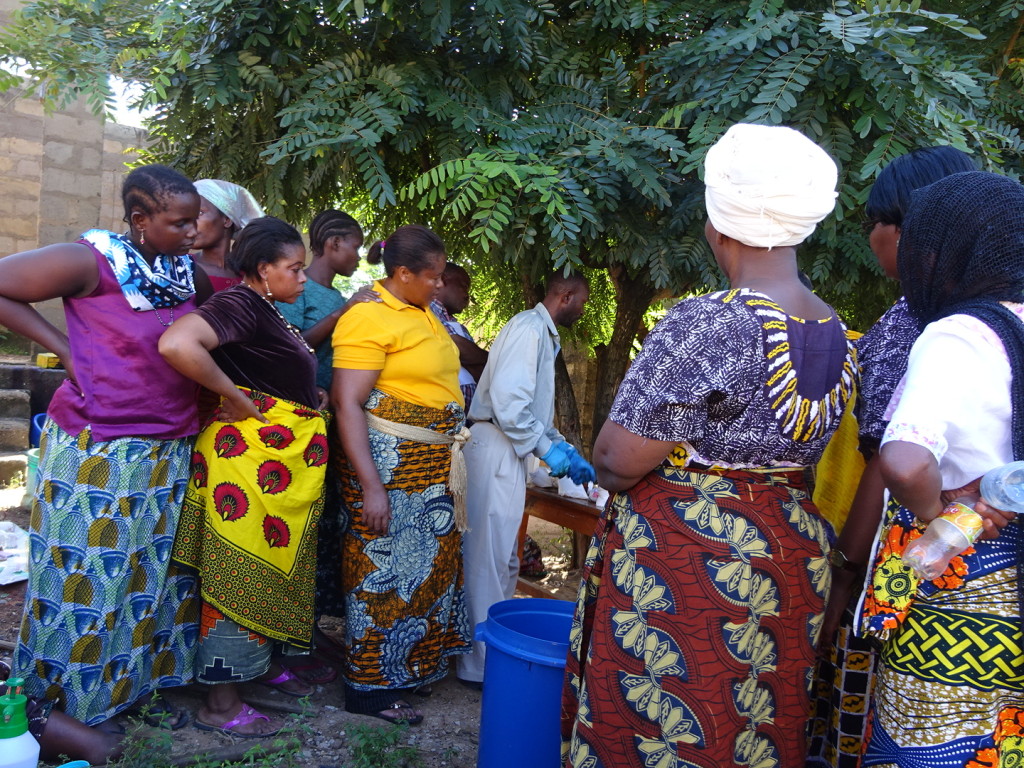 Soap making time, everybody! Gather round! 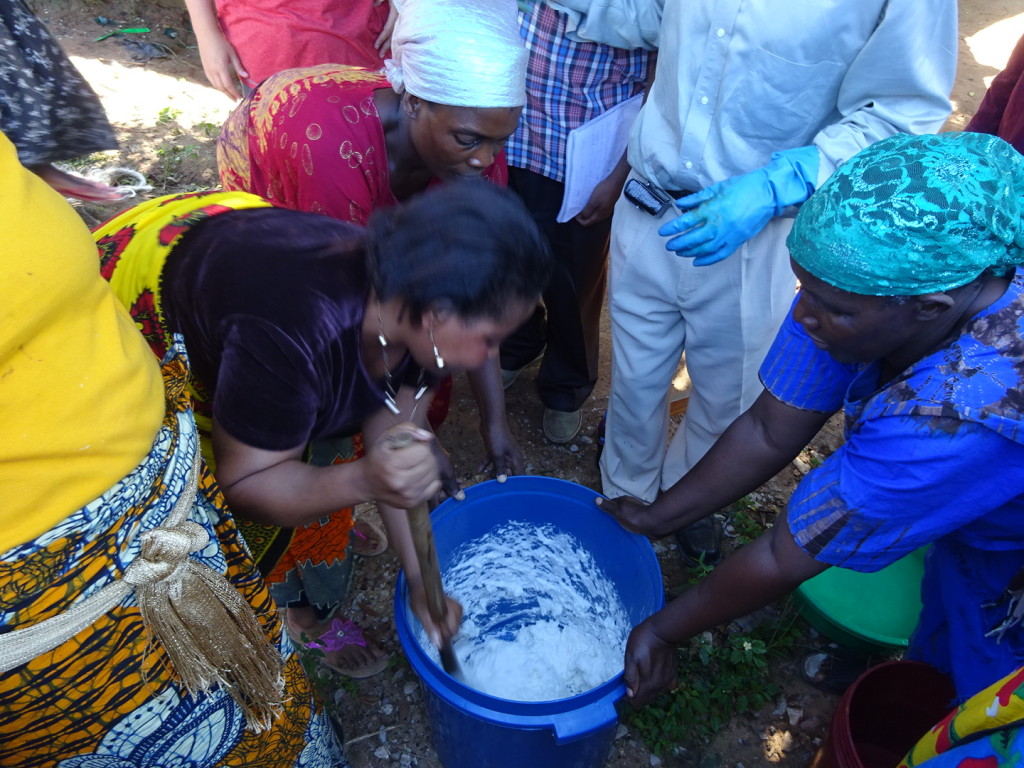 Making soap while the dye sets in. Making soap takes a LOT of heavy-duty stirring. Everyone took a turn including yours truly.

Finally it was time for the Big Tie-Dye Reveal. We all started unfolding the fabrics and they were SPECTACULAR! Everyone gasped as each cloth was unfurled! The excitement was absolutely, positively palpable! Neighbors from nearby huts came out to watch the beauties arise. Each was held up in the sun and then held linked together in one long chain of fsbric, blowing in the slight breeze. Pretty soon we had to recruit neighbors to help hold the fabrics. Finally, after a long day of practice, the class proceeded in a grand graduation parade! Students carried the fabrics through the entire village, up to the highway and back again. Here are two videos so you can see for yourself! (Parade #1 and Parade #2). Everyone was singing  and cheering. One of the students whose legs require crutches was one of the most spirited. As he swung his legs through the crutches, balancing in the rocks and ruts, he yelled out cheers in Swahili, “Are you tired!?” “NO!” The crowd yelled back. “Are you ready to go to town!?” (town is a loooooooooong walk away from the village) “YES!” was the quick reply. This was one seriously amped up team. When not cheering they were singing, marching, and “lulululululululuing”. Absolutely Fantastic! So great seeing folks so happy and proud. 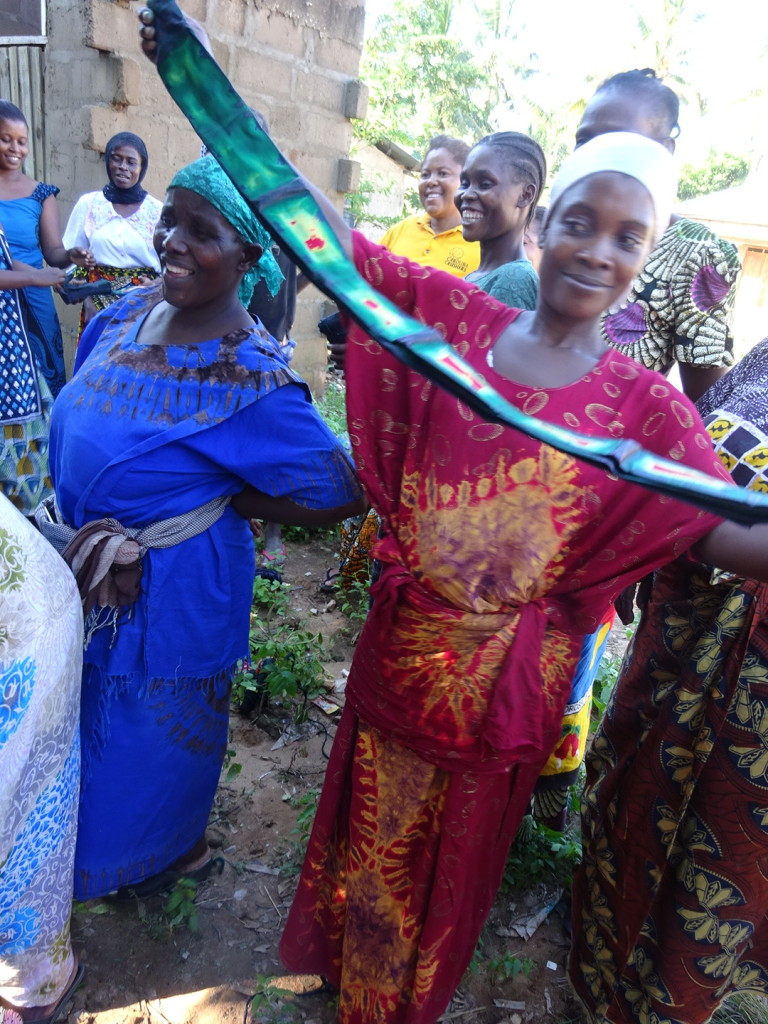 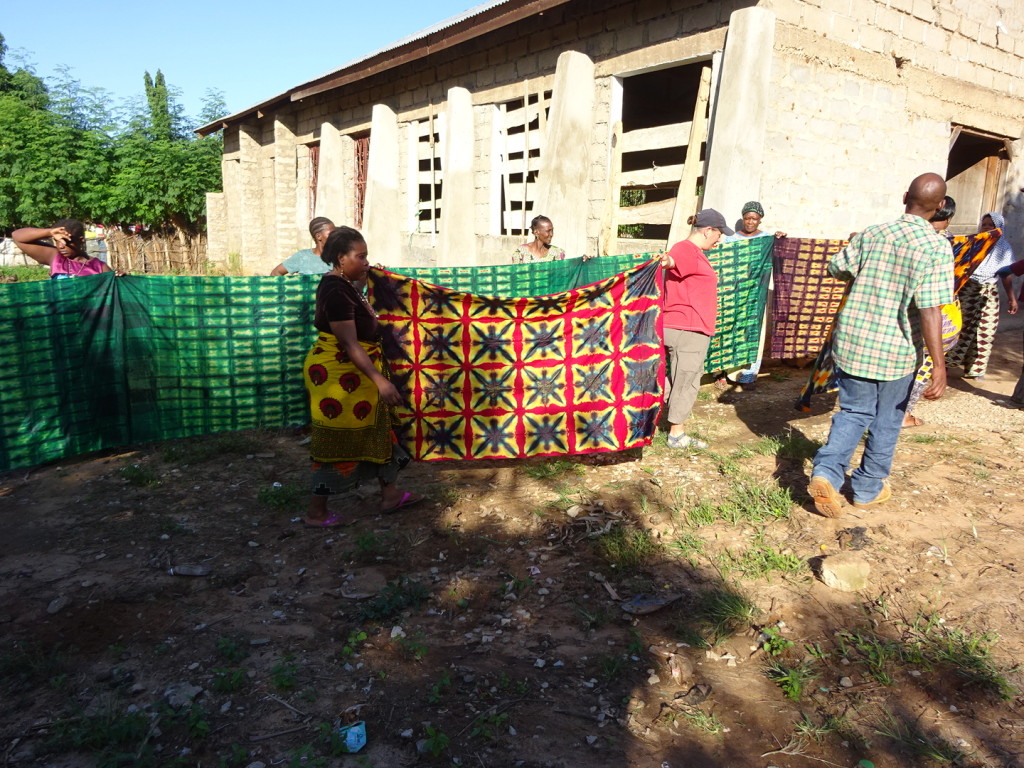 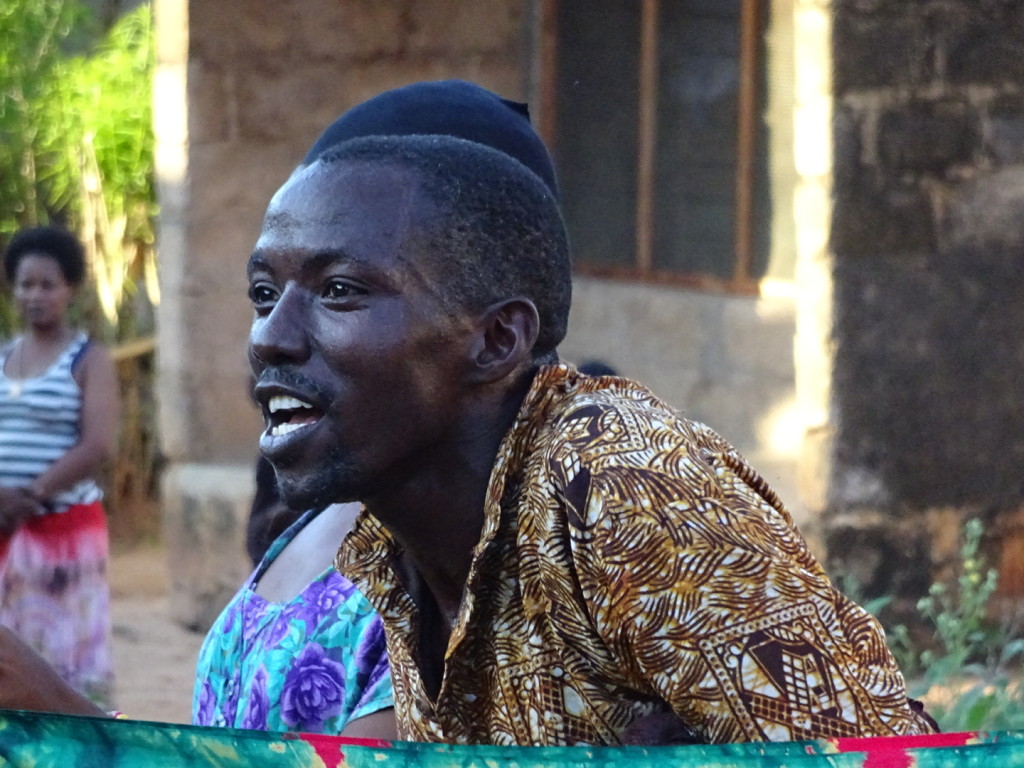 This is the man with crutches who cheered on the whole class. 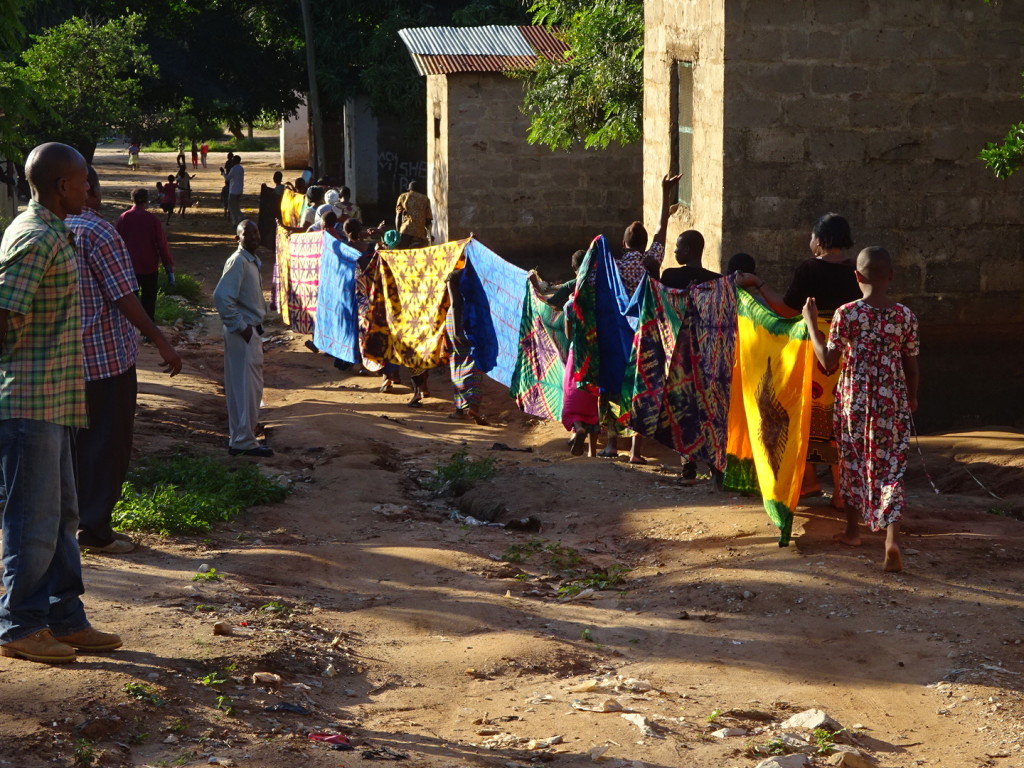 The parade begins and the entire town is out to see what the excitement is about! 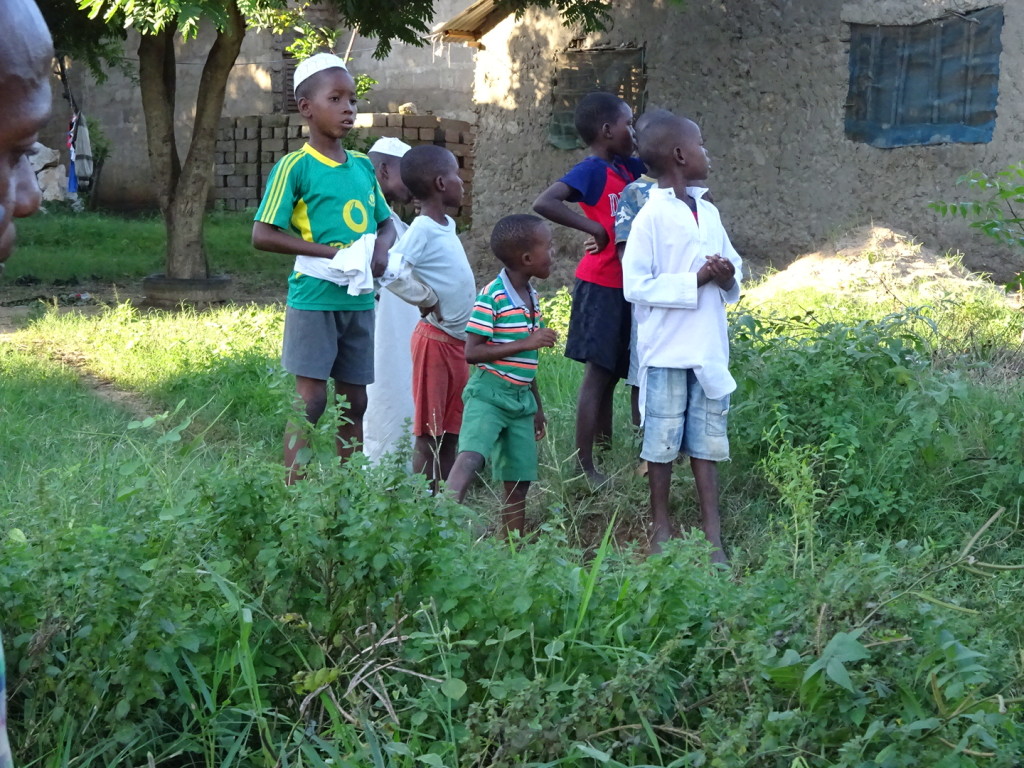 Loads of kids gathered to see the goings on. David would occasionally talk to them very, very quietly and they would listen with absolute attention. He told us later that if you just talk quietly, people HAVE to listen to you. Seems like a lesson a lot of politicians could learn.

The next seminar was held late last month. I think they expand on what they learned and new people can join in. For these villagers my biggest hope is that they can somehow work together to create products that can find a profitable market. It’s clear that just a little bit of help would go along way. The thing I loved most, was that it was Tanzanians helping Tanzanians. It wasn’t an NGO or western volunteers. They were trying to help themselves. 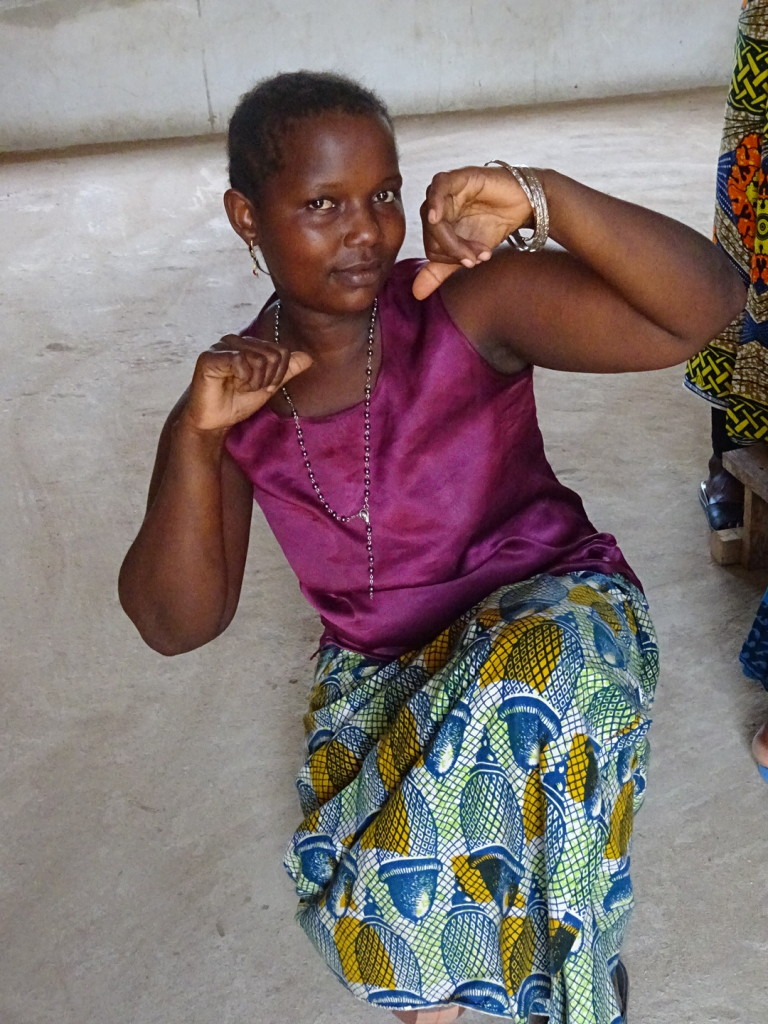 A great show of strength. 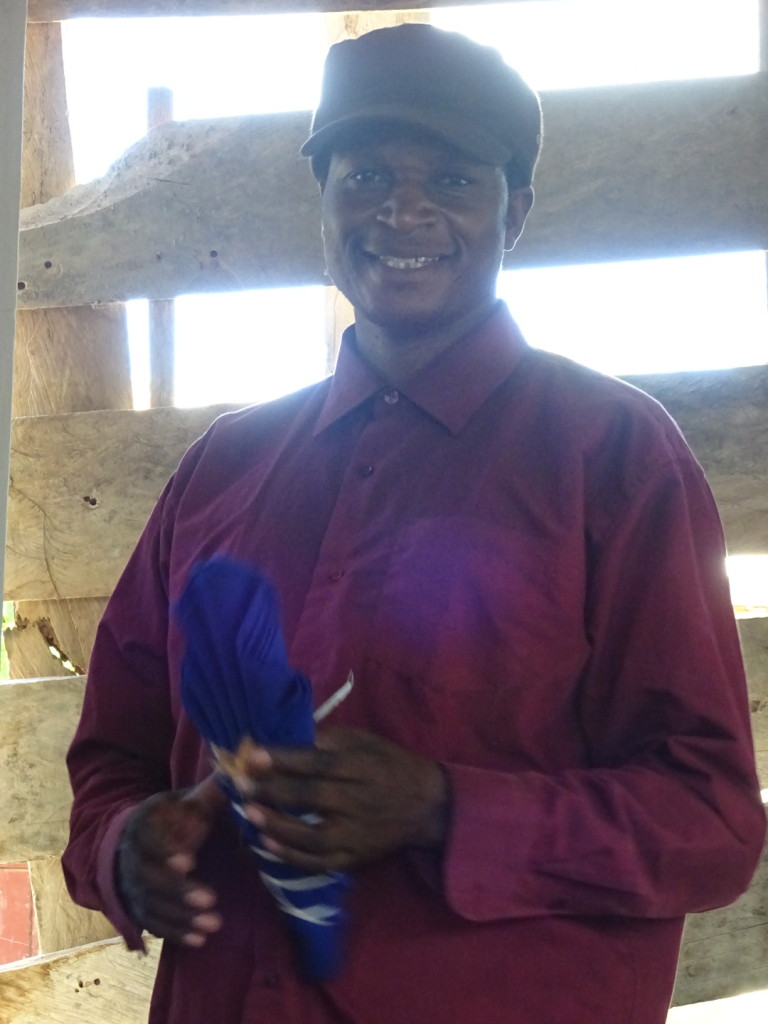 At the end of the day the class was called together for final notes. Once again we were brought to the front of the class and this time presented with two finished tie-dye pieces of our very own! A lady and a man each secured the sheets to us in traditional form. Aaron’s was tied Maasai-style and as soon as the man stood back, Aaron sprung into the air, dancing like a Maasai warrior! The class ROARED with laughter. Again, big gestures convey a lot! The organizers asked for a picture with us and started to pose, but as they did a bunch of the student ran to join the shot. Awesome! Then with the help of David we were able to say a few words to the class in an attempt to show our thanks. 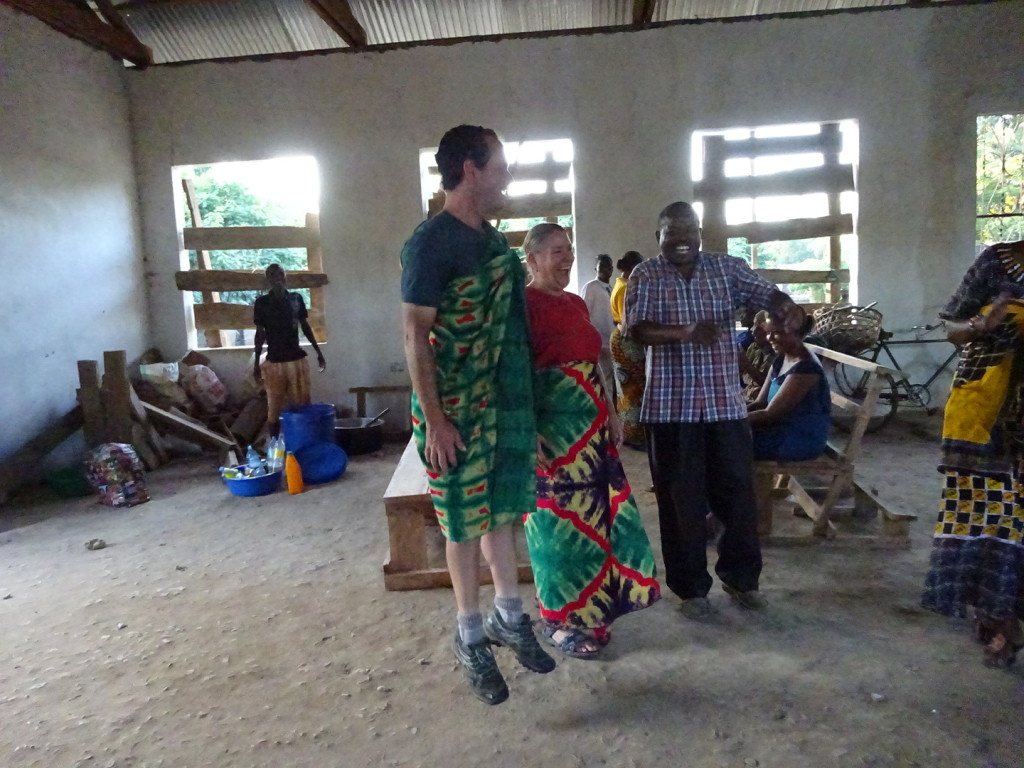 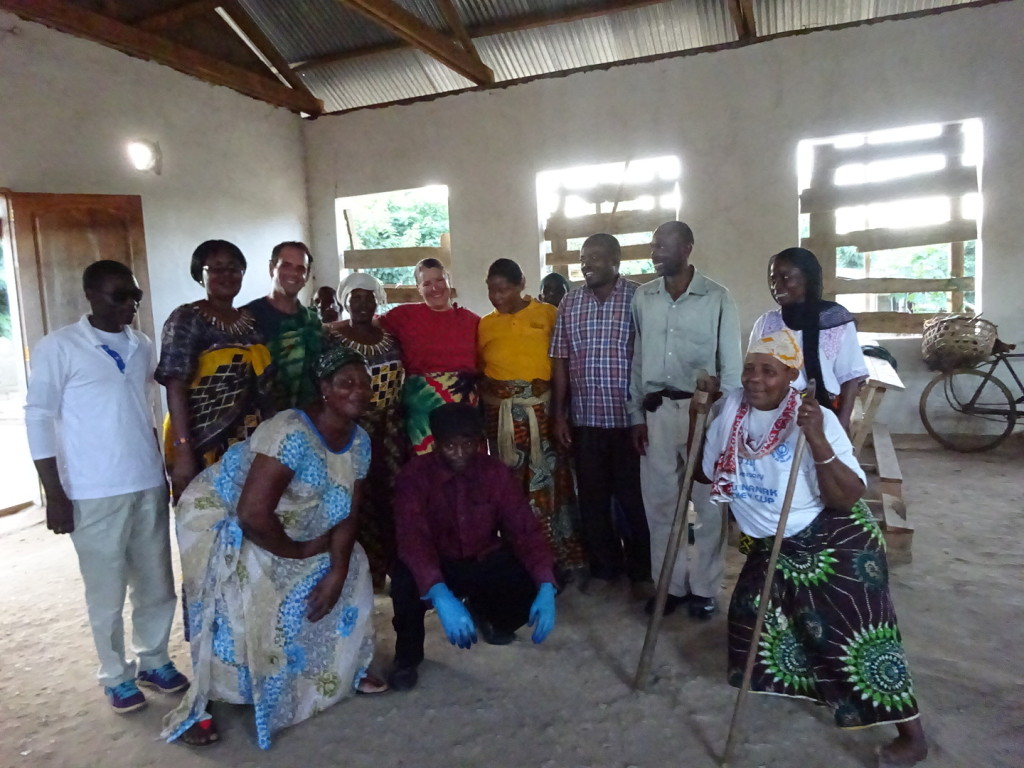 Everyone – into the photo!

Then suddenly it was over. We were just exhausted and emotionally depleted, but that was one fine day!

As Matron and Patron of the seminar we would be remiss if we didn’t pass on the contact information for the organizer. They are looking for a sponsor or anyone who can help them find a market for their goods. If you are interested, here’s the info (contact Rev. Peter Kihiyo at [email protected]) or we can try to help make contact. We can’t vouch for exactly how money would/wouldn’t be used, but we can say it was one very special group and we wish them the best.

Here a few more pictures of the day before we leave you: 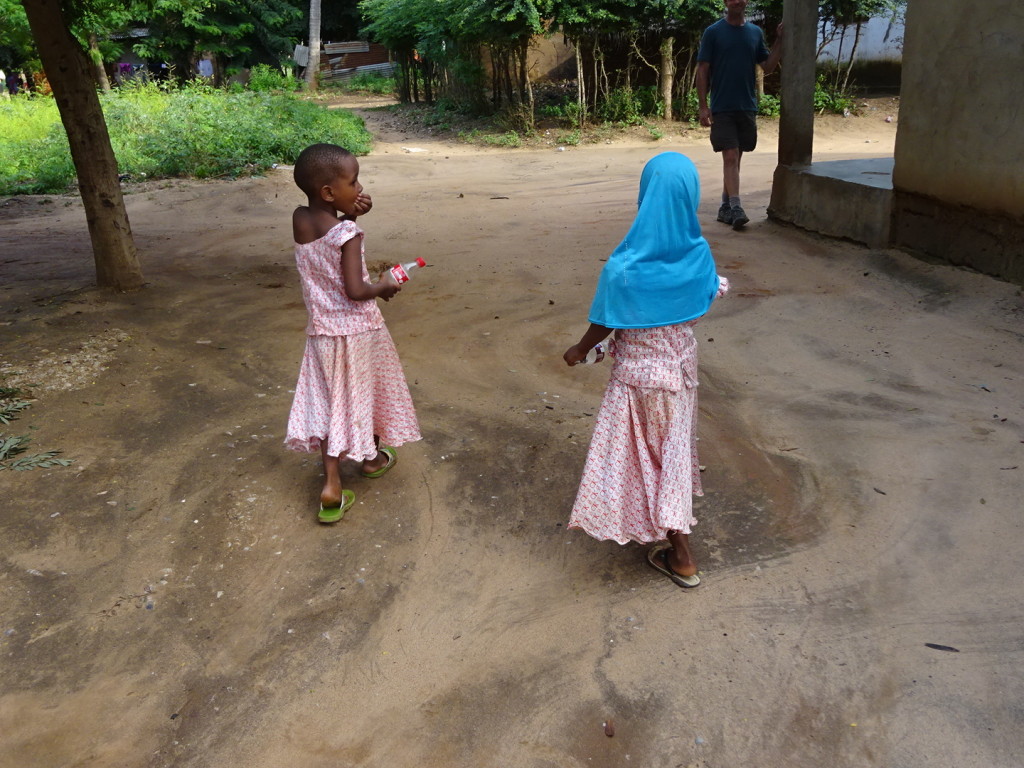 I couldn’t resist these little girls in the village. 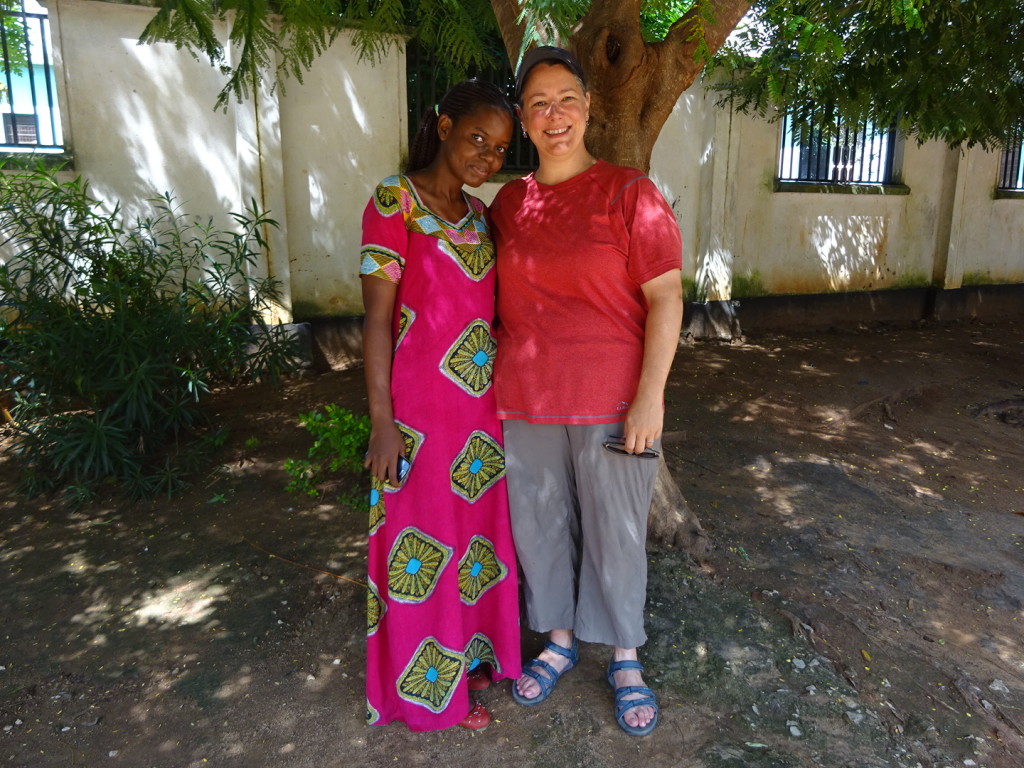 One student in the class brought her daughter specifically to come talk with us. She was an absolute delight! She is just finishing secondary school and awaiting her test results. She wants to be a doctor. Fingers crossed for her! 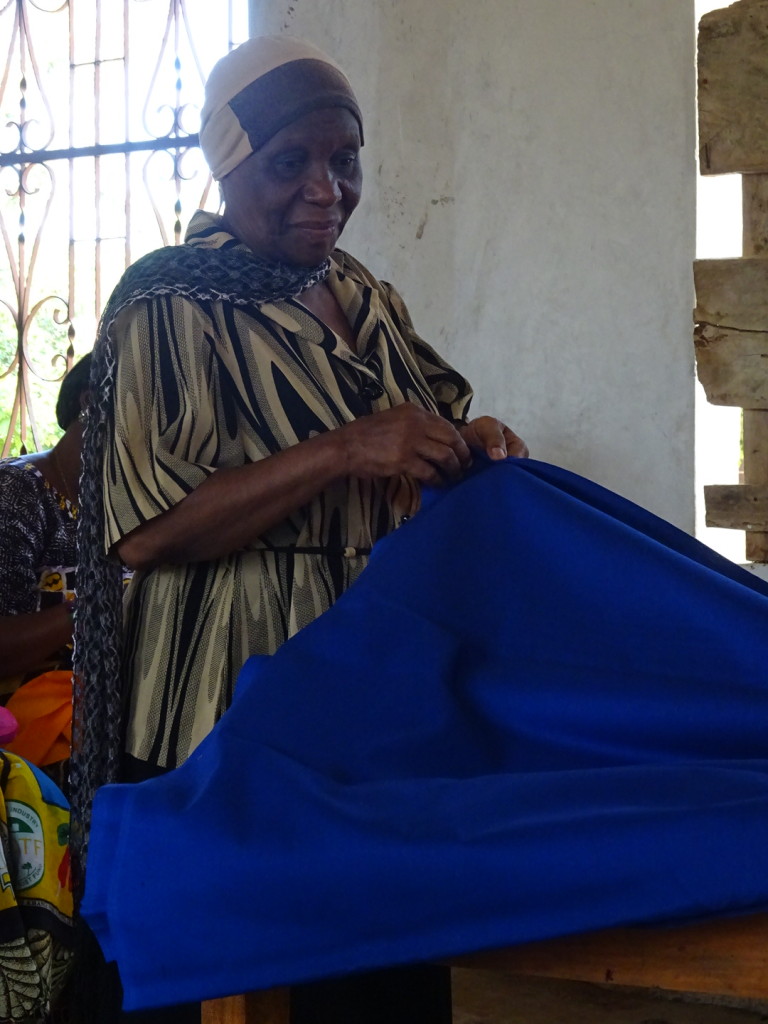 David’s mom, Mama Grace. I think she may have helped organize the seminar. 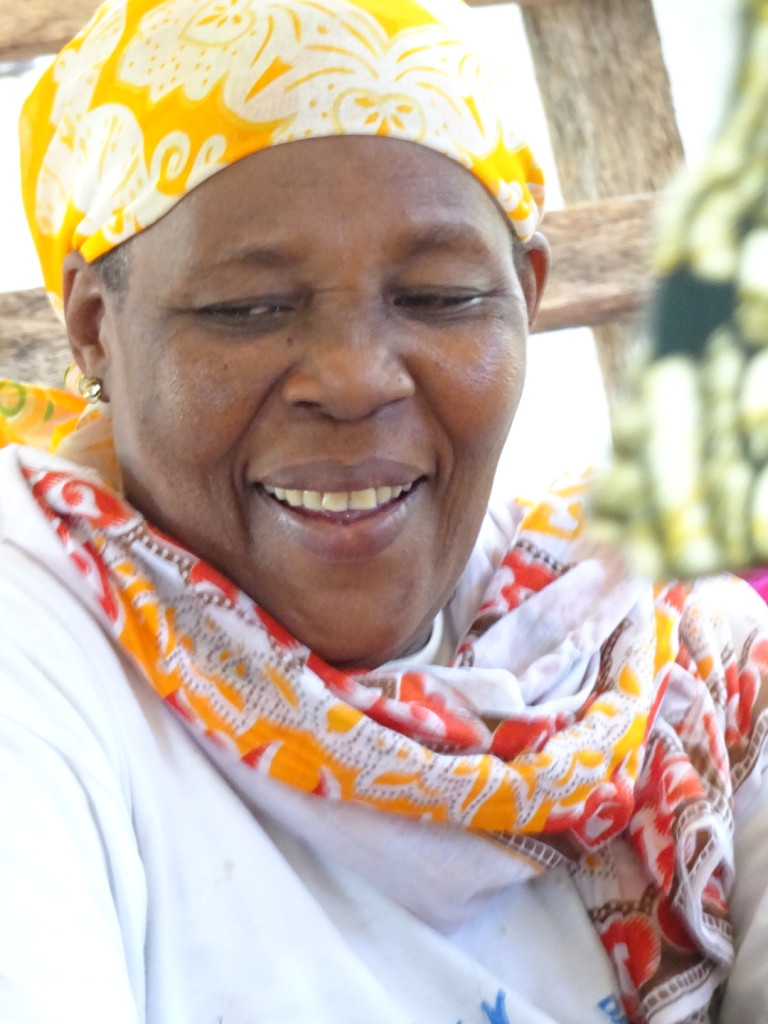 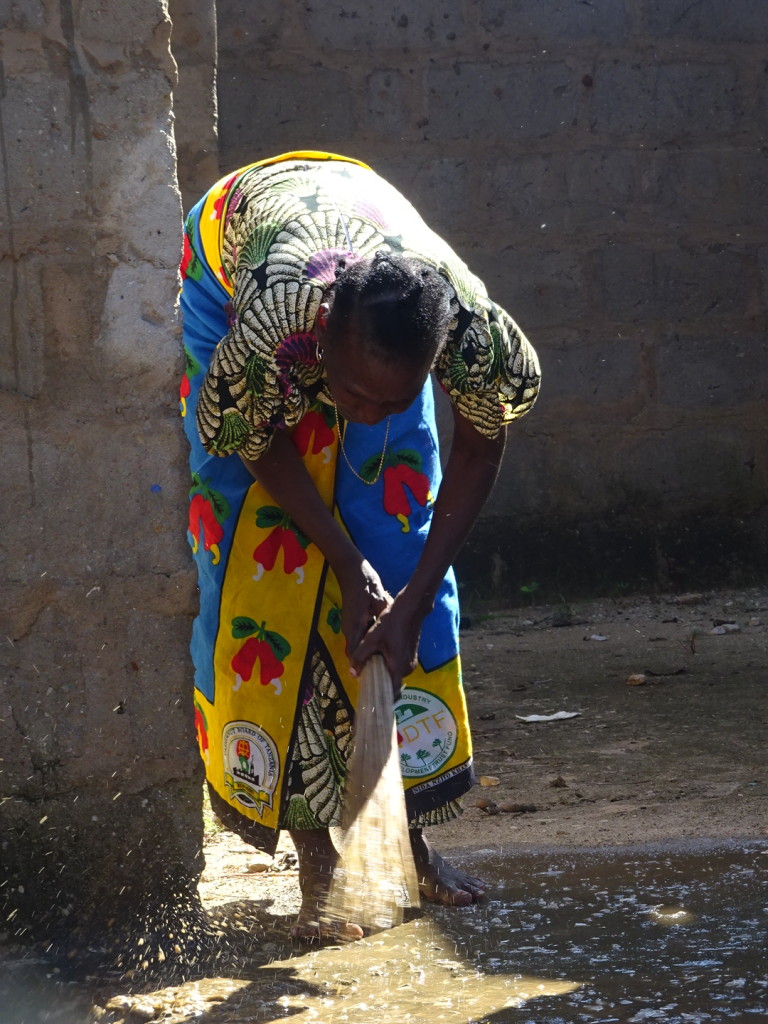 Cleaning the concrete so fabric can be dyed right on it. I love the light and the color.