The Roller Coaster to Mongolia

Something that is starting to sink in: when we do long “travel days”… stuff happens! Our 35 hour transit from Cape Town, South Africa to Ulaanbaatar, Mongolia was no exception. Believe it or not, this is the short version:

– Checked-in for our flight out of Cape Town and were issued boarding passes for flights #1 and #2 with our final boarding pass to be picked up in Dubai or Bejing. Our over-night flight to Dubai was long and uncomfortable – we didn’t sleep at all. During our six hour lay-over, we couldn’t find a place to rest and just walked the airport until it was finally time to board flight number two. So up to this point: completely uneventful and going as expected. 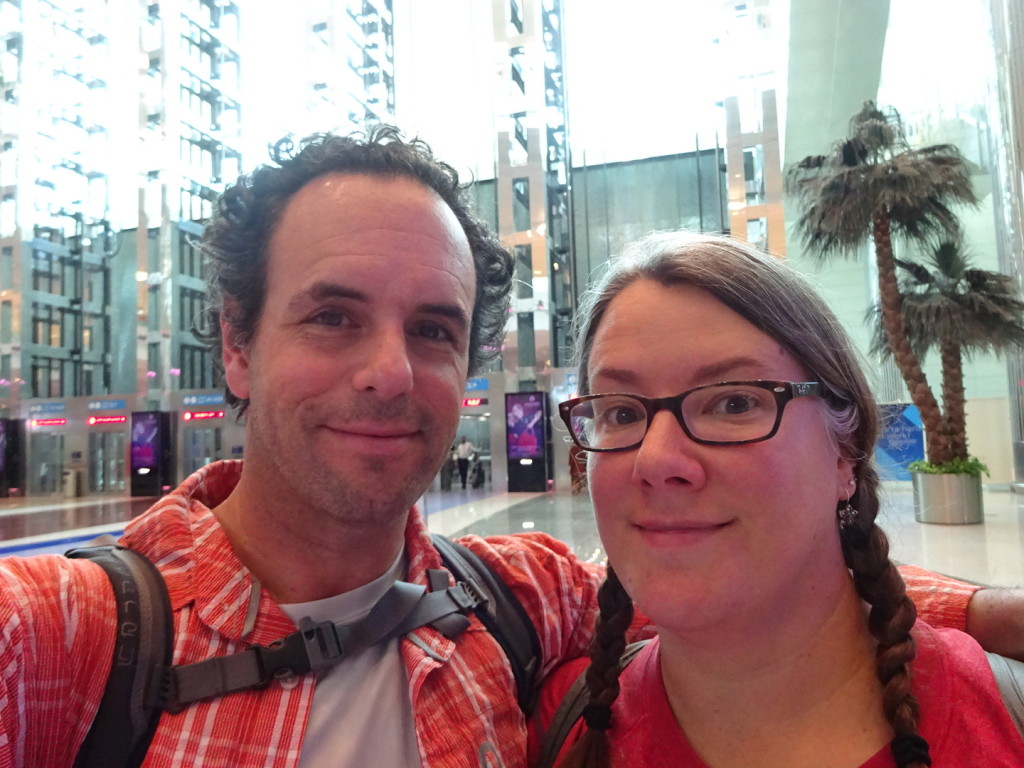 The Dubai airport is spectacular. That big wall behind us? One giant water feature. Had we slept in the last 30 hours we would have enjoyed it even more.

– At the gate of the second flight the airline rep unceremoniously ripped up our boarding passes. We didn’t even question it because sometimes airlines print and re-print. Then, after a moment, some magic words: “You’ve been upgraded to business class…together.” (I love that they felt compelled to pause and then say it was for both of us.) 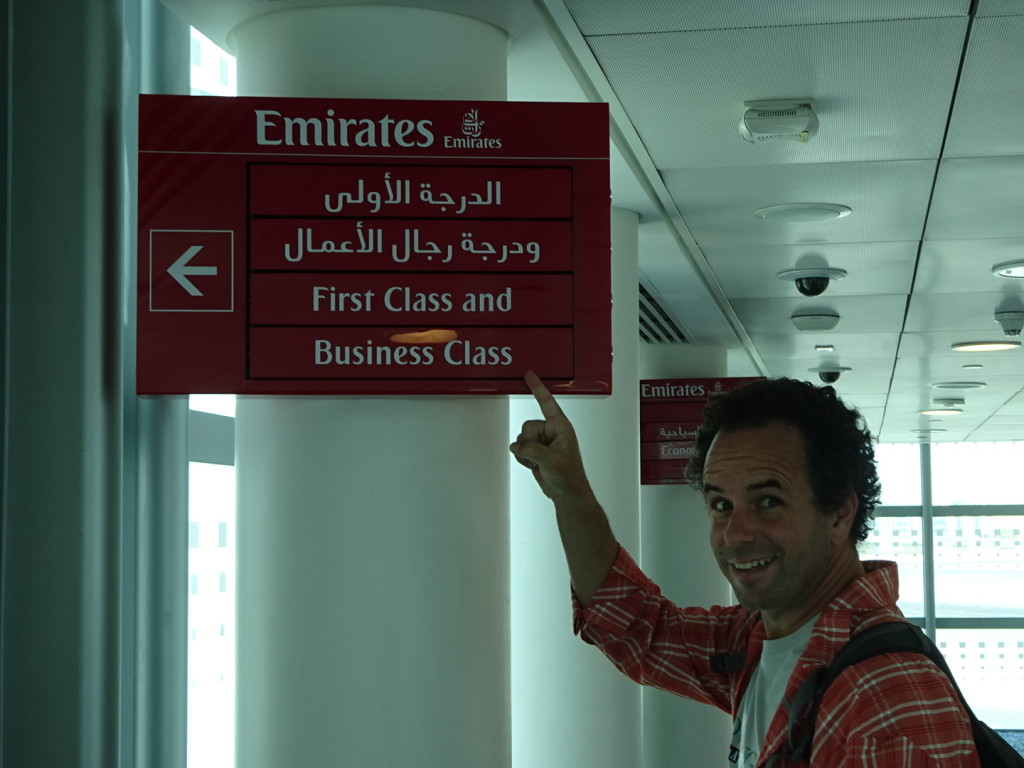 Stunned…totally stunned to be in the fancy part of the plane.

*** WhatTheWhat!? Business Class!! Sure some of you out there always ride business class — and having done it now, I understand why — but we never had. We’ve never been upgraded. We have no idea why it happened: was it because we were really nice to the rep who checked us in in Cape Town when it was apparent she was having a tough day? Was it that our names are at the top of the alphabet and they had two seats to fill? Totally random? Don’t really care, but we say a huge Thank You to Emirates Airlines and hope it happens again…and again…and again.

In our exhausted state we stumbled away completely stunned. Then elation took over, magnified because we were so tired! We nearly missed the special gangway that was just for us business class passengers, where we were greated by name and walked to our seats…offered drinks and a blanket. Aaron and I smiled ear-to-ear…not for the food, the drinks, the blankies, the big TVs, or the noise cancelling earphones. What had our attention were the seats that fully recline into beds. BEDS!! Sure it was only a six hour daytime flight…but we would nap through most of it. It being business class, they gave us a late dinner while we watched the most recent Hunger Games (man those HG movies are good!) on giant TVs on the wall ahead of us. We both thought, “this is the best trip ever” *** 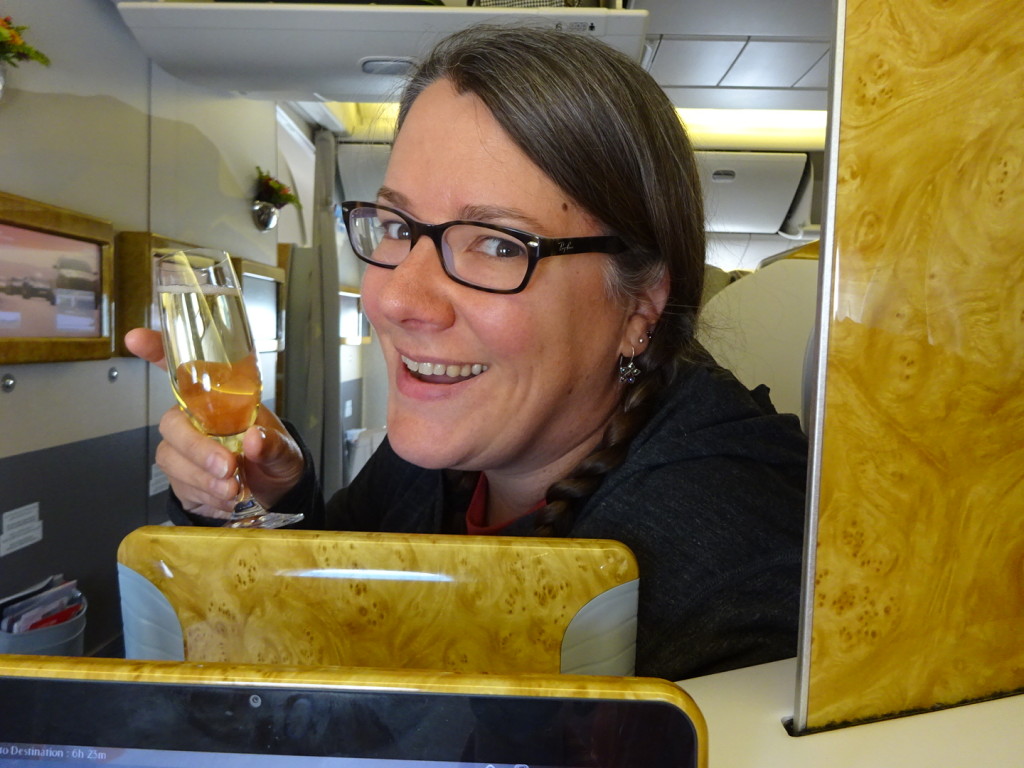 For Anner: Clink! (this one is for Karen N.)

What goes up, also goes down. The roller coaster was just getting into motion.

– Arrived late night in China. No desk is open to print our final boarding passes and it turns out you need your boarding pass to get into the terminal hotel where we had reservations to sleep for ten hours. That would have been good information to know earlier. Our well laid plan – foiled! All we can think is, “thank goodness for our business class naps.” We look lost when a Chinese woman (and eventually several other workers) walked up to us and just started trying to help. Long and the short of it is we have to go through immigration, get stamped, try to get another place to stay, this time outside the airport. So, we can officially say we’ve been to China (for 11 hours anyway), but I don’t think we can count it as our 11th country visited…can we?

Anyway, we take a shuttle to a business hotel which was not the worst we’ve stayed in… that’s the best I can come up with about that. We slept for a couple of hours, but more importantly, we take showers and change undies, and stretch out. It was totally worth it. Can I just say, from my 11 hour survey, EVERYONE in China is incredibly nice and helpful and speaks nearly perfect English. (hmm, Aaron’s looking at me funny – not sure he agrees about the “perfect English” part, but they sure did try to help!)

Bejing airport is pretty awesome! I think they must have shown pictures of it during the winter Olympics because it looked very familiar to me. It was CRAZY busy when we came back in the morning! 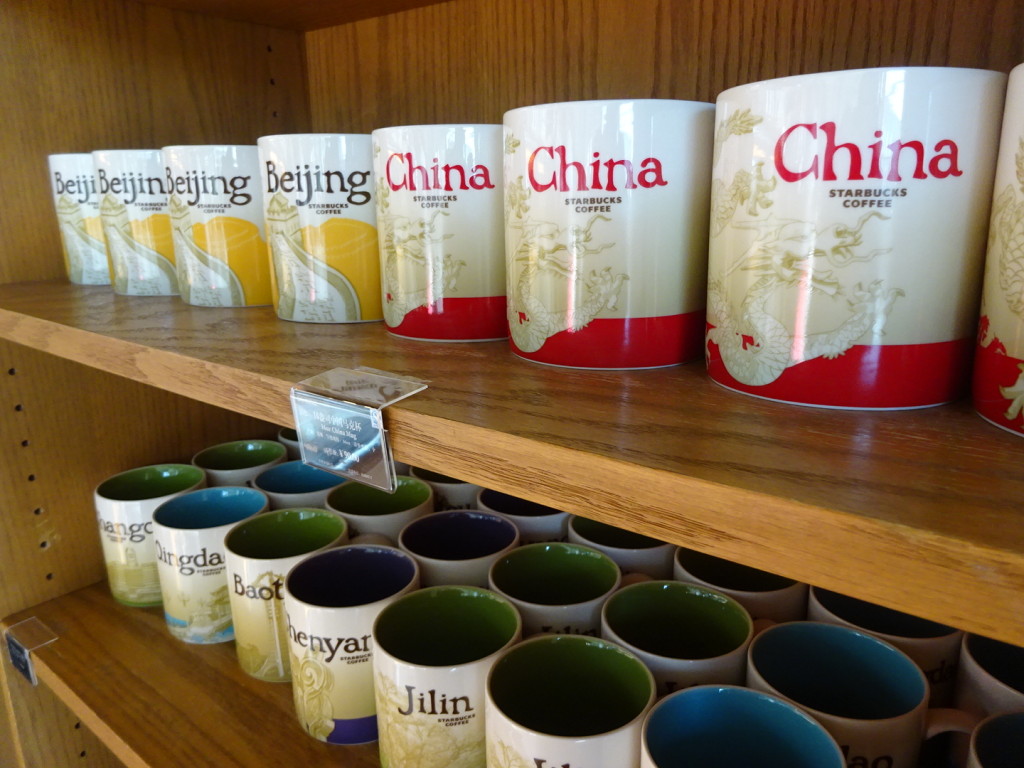 Arrived at our gate and found only one restaurant, our hometown fave – Starbucks! For only the second time in ten months, we make a stop at a chain store. With my black tea latte in hand, I am instantly transported back home. Maybe it was that shot of vanilla…

– Return to Bejing airport at 6am and get our boarding passes with no problems. Quick flight to Mongolia is uneventful. Line through immigration is long, but we make friends with Sarah from Sascatchewan, Canada who gives us an official Ultimate Frisbee disc because we don’t have any hostess gifts for the families we expect to meet along our trek. Now we’ll have something to play with the kids! How nice is that?

The end is in sight! The trip is back to being awesome again.

With Travel Day nearly complete, we are thrilled….with no idea what is about to happen next.

– Off to baggage claim to collect our backpacks and get some money, we snap a quick, exhausted-but-happy picture in the airport. Apparently it was time for a new low on our ride as only half the bags made it. We checked two little backpacks (yep, the two you see under the tree in our posts) and only one arrived. I wanted to cry at that moment. Aaron held it together a little better. It’s now 30-hours later with still no sign of Aaron’s bag. The upside…almost all the cold-weather gear made it (but no, Lisa, not the new orange puffy coat!). We still have three days for it to arrive and we’re told this is a pretty ordinary occurence in Mongolia, so everyone join me right now and Cross Your Fingers! I think that will do it. I will tell you this: it will NOT stop us from our 17-day horse trek. We’ll go naked if we must..though the rest of the trekkers might disagree.

– We stopped at the ATM past baggage claim and forgot a zero when we punched in the amount. Left the airport with the equivalent of $10 instead of $100. Luckily Mongolia takes Visa. It’s not really a big problem, but I put this in there because it’s kind of the cherry on the Travel Day sundae.

So – that’s that. We are officially in Mongolia. MONGOLIA!!!! Can you believe it?? Super excited! We are very comfortable in our guest house, complete with great internet (hence the chance for this blog and perhaps even one more before Radio Silence), and looking forward to our joyful reunion with pack #2. We’ll keep you posted. And if anyone has any tips for getting into Business Class again or wants to give us free upgrades, we will graciously accept such offers.