After the big Mongolian horse trek, I just knew we’d need some low priced, warm, relaxing TLC (and I was so right!), so we decided to consult the weather reports. Rainy season in Vietnam…no. Typhoon season in Thailand…yikes! How about Indonesia? Well…it looks like Bali has reliably good weather in September. Boom – booked! Over a mediocre latte in Joburg we decided to bring on the beaches and sunshine! 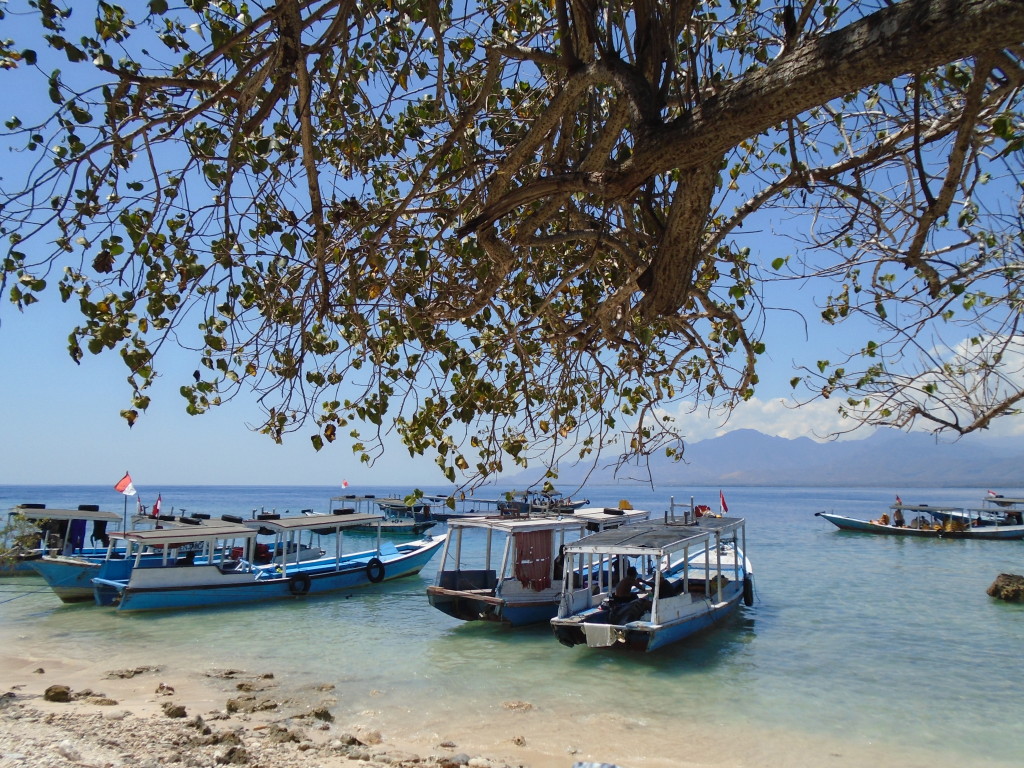 Our first interesting discovery about Bali was that we found ourselves on vacation. I know you’re thinking we’ve been on vacation for 11 months now, but not so! To us, traveling and vacation are two wildly different things. Traveling is what we’ve been doing: getting off the tourist path when we can, taking public transport with the locals, finding some craftsperson and asking them to teach us for a day. This has lead to an incredible series of adventures. A vacation, on the other hand, means staying (usually) in touristy places, eating ice cream cones (lots and lots of ice cream cones) and mostly just relaxing. This is a bit less adventuresome, but so much easier, and after Mongolia, “easier” was all we wanted. Nothing wrong with either approach, just depends on what you’re looking to enjoy. That’s probably a whole post in itself… 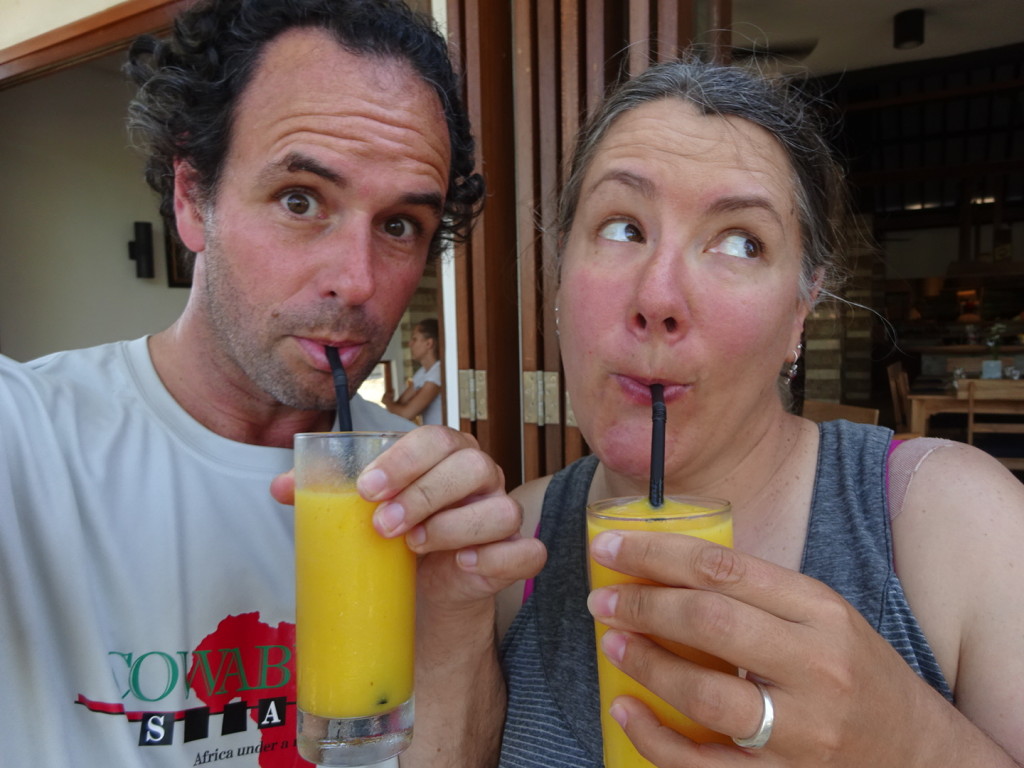 A couple o’ mango junkies in the morning!

We knew we were on vacation when the first thing we did was sit down to fresh mango and fresh pineapple drinks. OH! They are SOOOOO good!! Mark my words, there would be more of those. Actually, come to think of it, the FIRST thing we did was take all our wore-them-for-two-weeks-straight Mongolia clothes to the laundry where for about $4 got everything we owned washed, fluffed and dried. Heaven! I’m sure all of the town of Sanur thanks us for not stinking up the place. You’re welcome.

The second thing we did was buy really cheap-o summer clothes. After three weeks in multiple layers, t-shirts and tank tops were going to be glorious!!! It was also a chance to bring back our Central America skills and try to negotiate the price down as far as we could stand. Our reward: wearing cotton, not quick-dry gear, for two weeks straight! 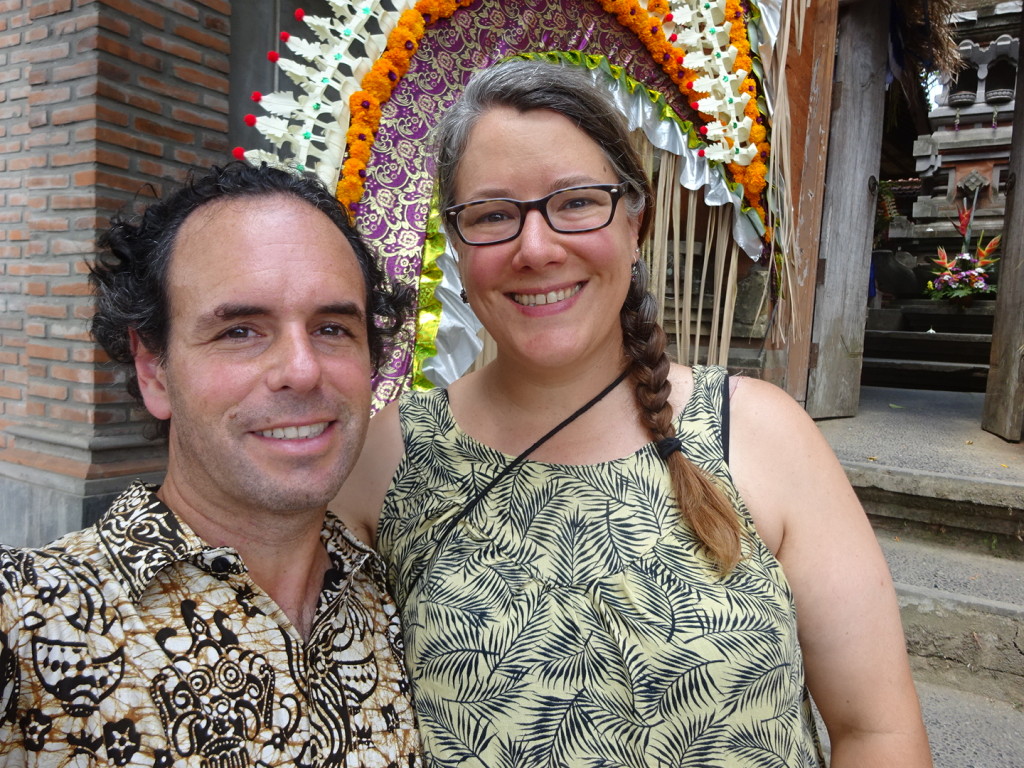 Look at us in cotton shirts!

Deciding this would be a mid-trip vacation, we spent the first ten days on a crazy snorkel safari. After an unpleasant start to the tour (see Barfing in Bali) and a few stops plagued with cold water, poor visibility, dead coral and hundreds of other snorkelers smacking us with their fins, we finally hit our vacationing stride on the north side of the island. We arrived in Tulamben, a smallish town on the north-eastern coast. Even though it’s only a couple of hours away from the airport, it’s already less touristy. There we got to snorkel over a ship wreck! A ship wreck!!! The USAT Liberty – a cargo ship that was torpedoed by the Japanese in 1942. Snorkelers never get to snorkel over a wreck, so it was pretty darn cool! Neither of us had ever seen anything like it. Visibility wasn’t great that day and at first I found myself thinking, “geez, that looks like a boat” as I had completely forgotten this was a part of the safari! As visibility cleared, we were amazed… 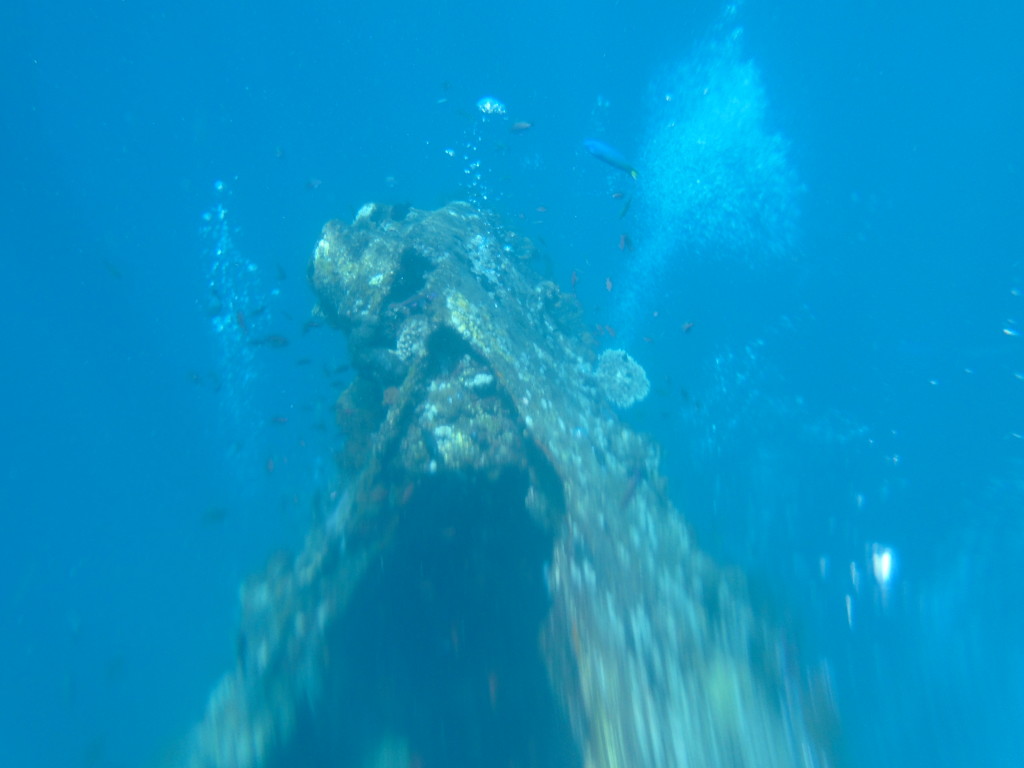 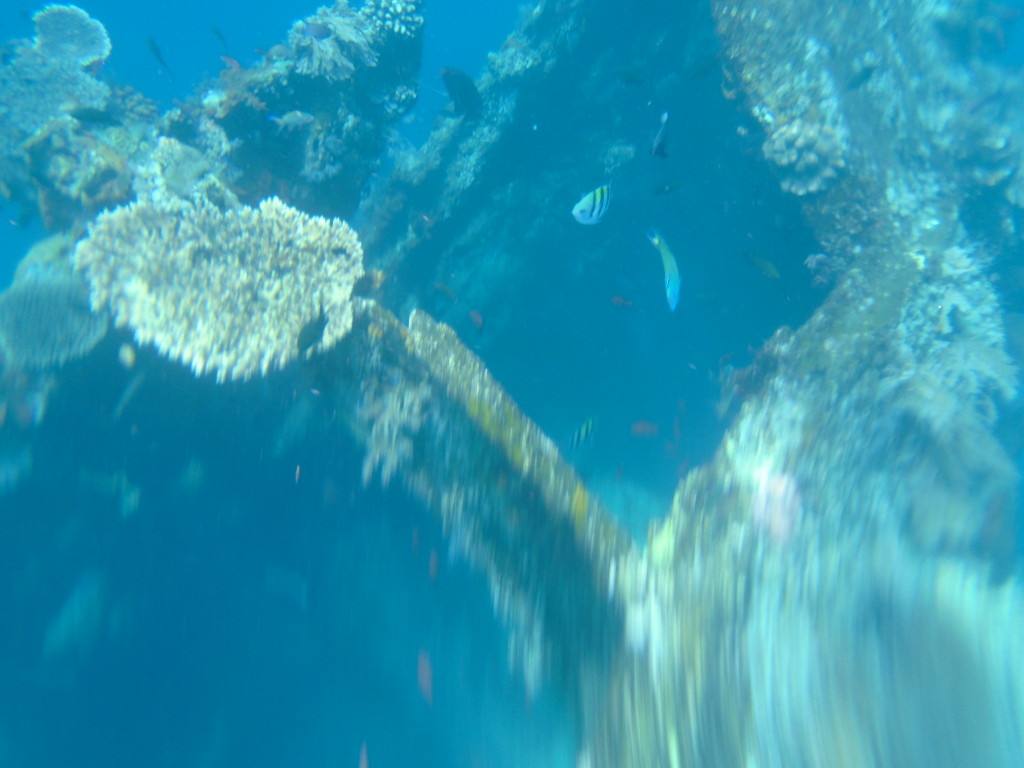 You just don’t get to snorkle over something like this every day! 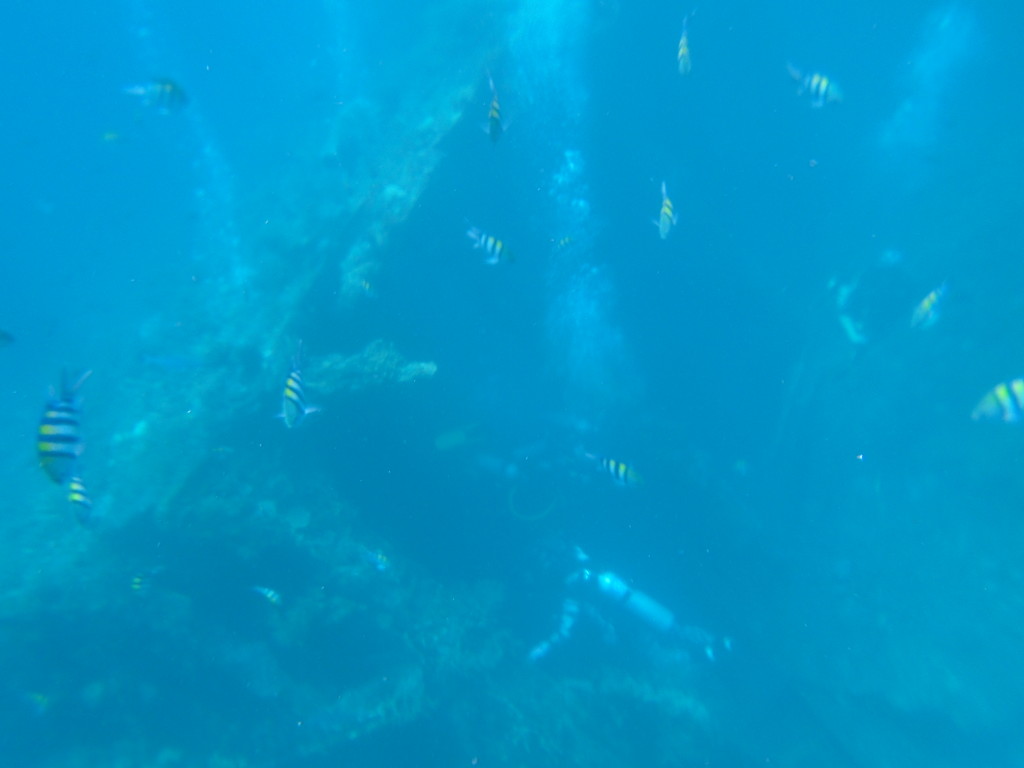 I was pretty sure our luck had turned for good as we made the four hour drive to the Menjangan Resort in Bali Barat National Park on the far north side of the island. It just had that vibe we like – fewer people and vehicles and a bit more remote. For future reference, when in Bali, Go North, Young Man! It was everything I hoped Bali would be. Unlike our other stops, the water at Menjangan Island was warm, flat, loaded with living coral, oodles of fish big and small, schools, clams, starfish – The Works! Over the course of our snorkel safari I saw a baby shark, Aaron saw a sting ray and sea turtles, we both saw a lot of jelly fish and were subsequently stung by them as proof, we saw clown fish (aka Nemo), lobster, trigger fish, schools of jack fish, and millions of little tiny fishes. Snorkeling was magical! I even noticed by the end of the safari Aaron had fully adopted my long-time snorkeling philosophy: “First one out of the boat, last one back in.” 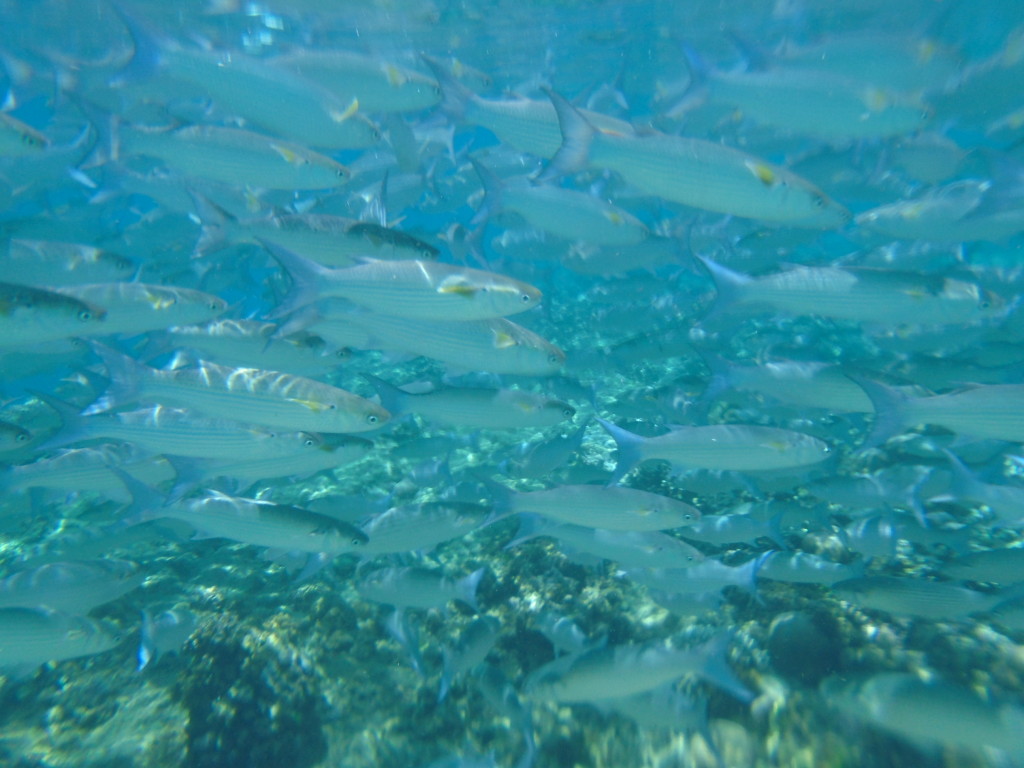 School is in session!

Blue was one of the few colors that showed true in the underwater photos we took. 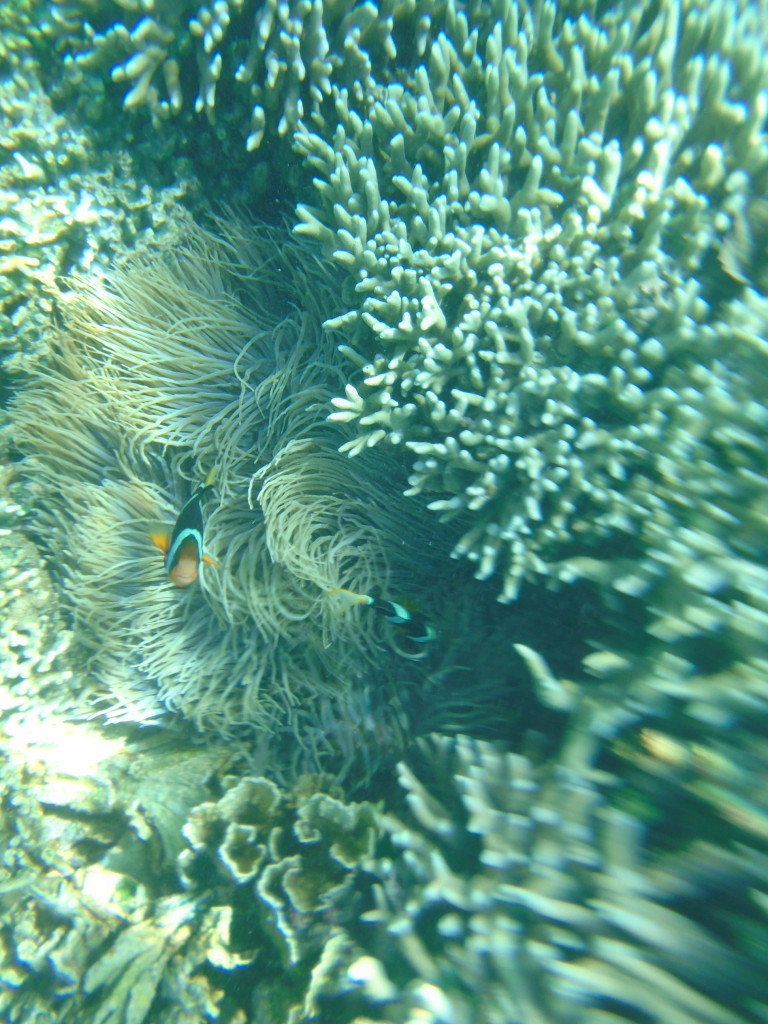 Nemo! Aaron was pretty excited when he got this shot. 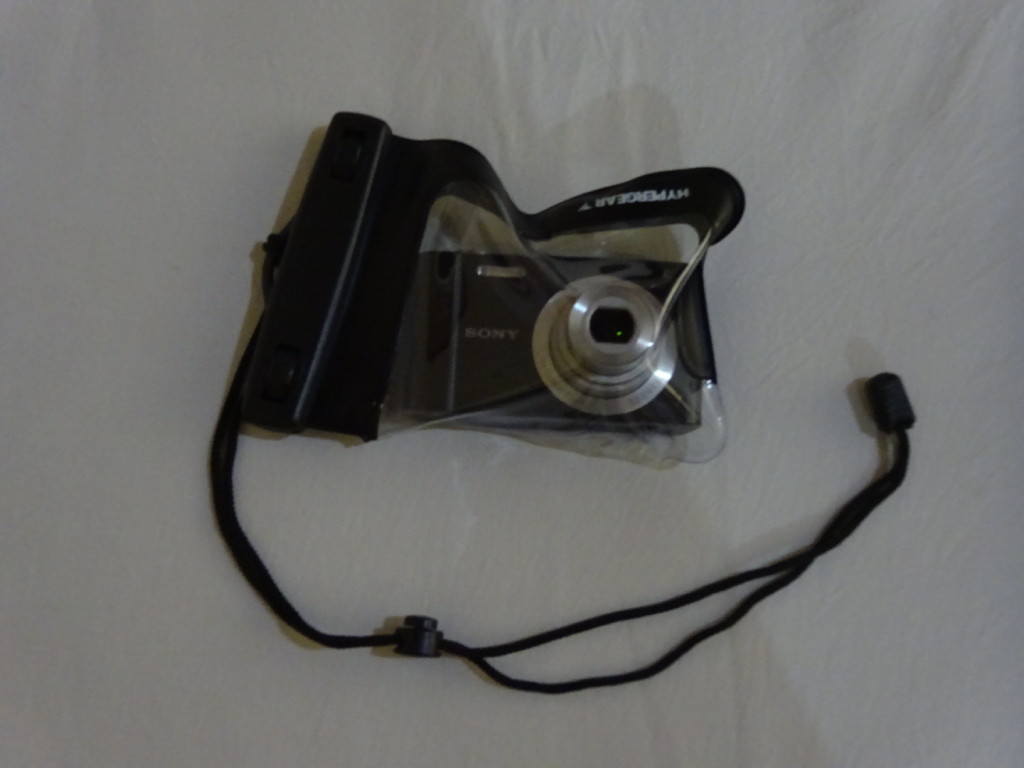 Especially as this was our underwater camera setup – a cheap point-and-shoot and a waterproof bag! 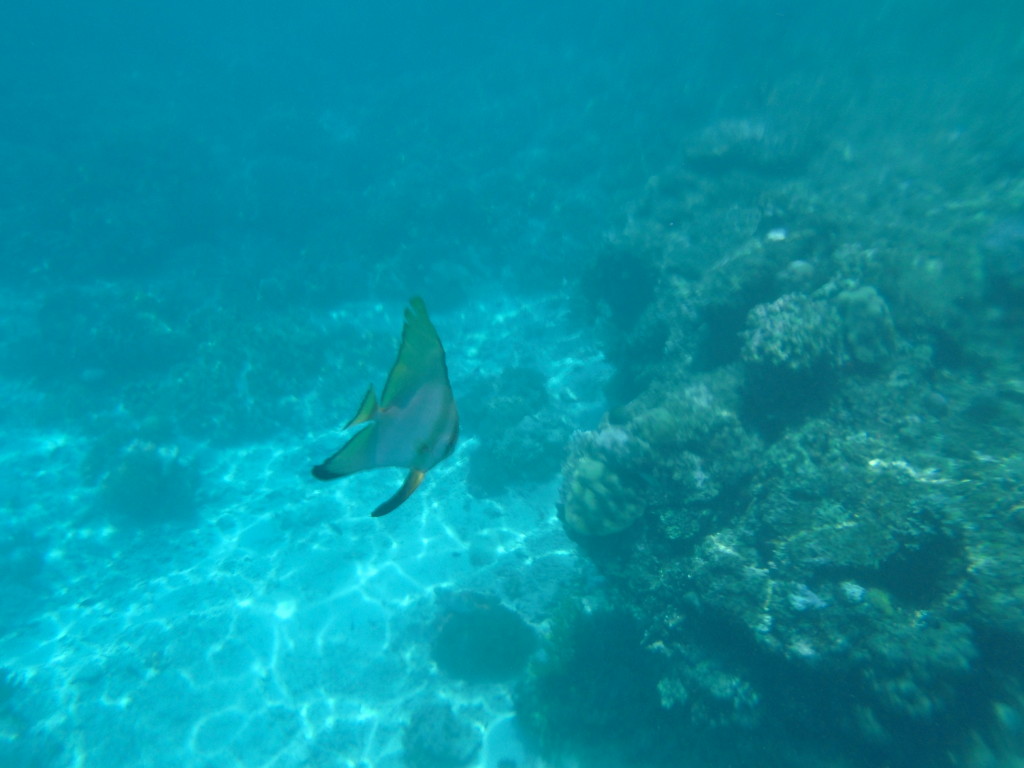 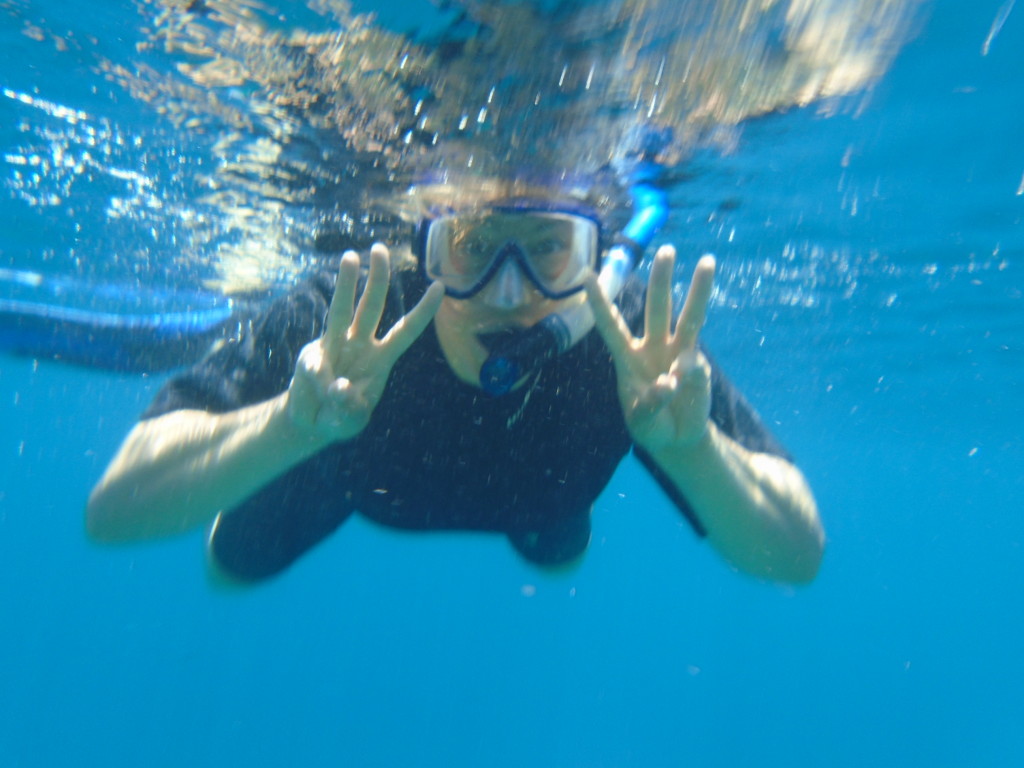 My underwater way of saying “WOW! Did you see THAT?!” 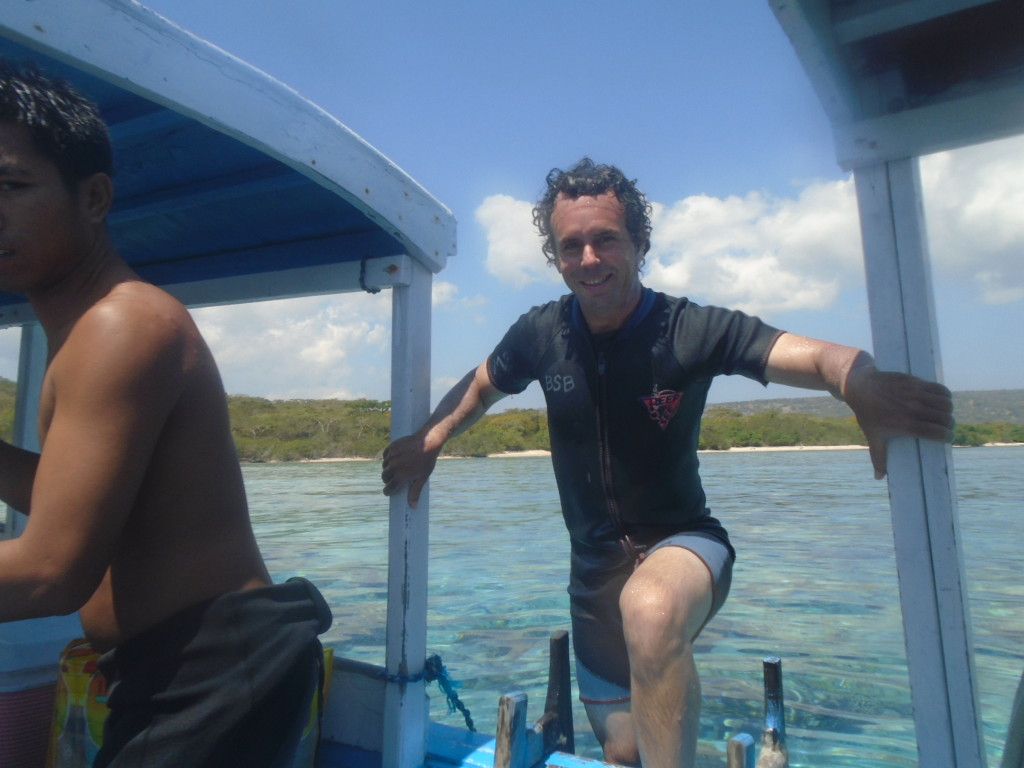 Last one out of the water. You make me proud!

PLUS, if the unreal sights weren’t enough (and they were), as part of our snorkel safari we were lodging at a four star resort! The food and fruity drinks were divine. I mean, really! After Mongolia we hadn’t seen a fresh fruit in weeks and we could not get enough. Our every want fulfilled. We watched the sunset, read books on the beach, and every time we left our suite (yes, a suite – only slightly smaller than our actual house) someone came in and cleaned it! Most times they even left us treats like brownie bites! That’s right – turn down service and brownies at bedtime. It was GOOD living!! We liked it so much we changed the rest of our safari and finished up with an extra day at Menjangan. How could we possibly end on any other note? Once you find the world-class snorkeling don’t leave it! If we had it to do again, we would skip the south side of the island and just head right up north. 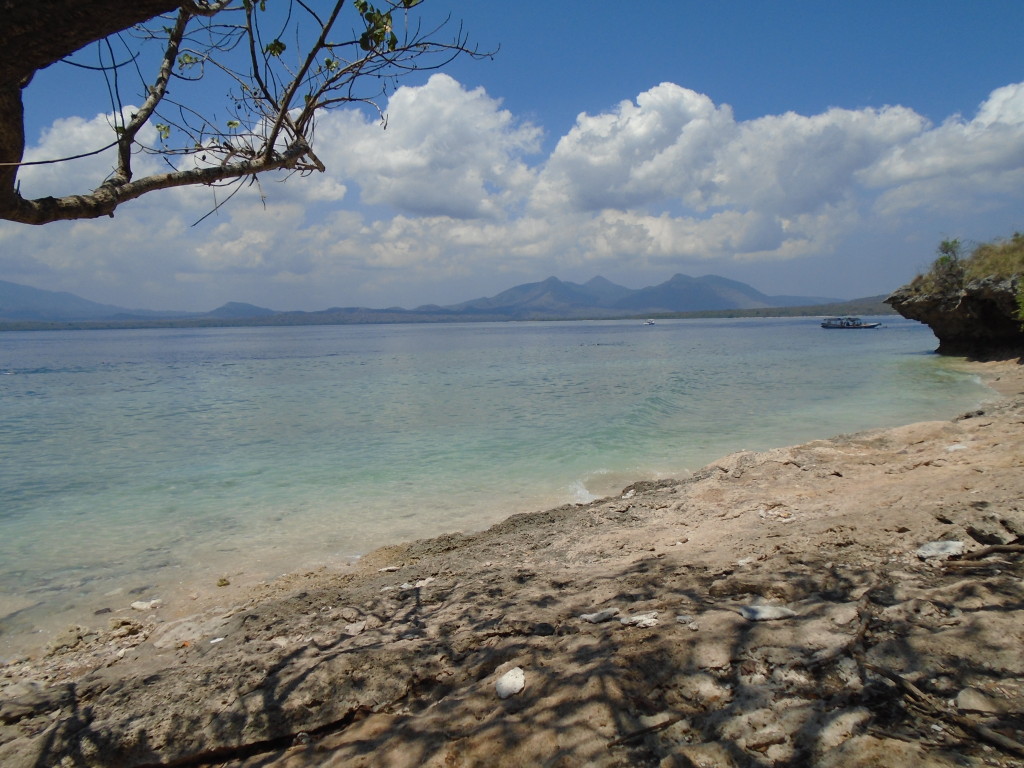 If you looked the right way off the beach, you could see over to Java. 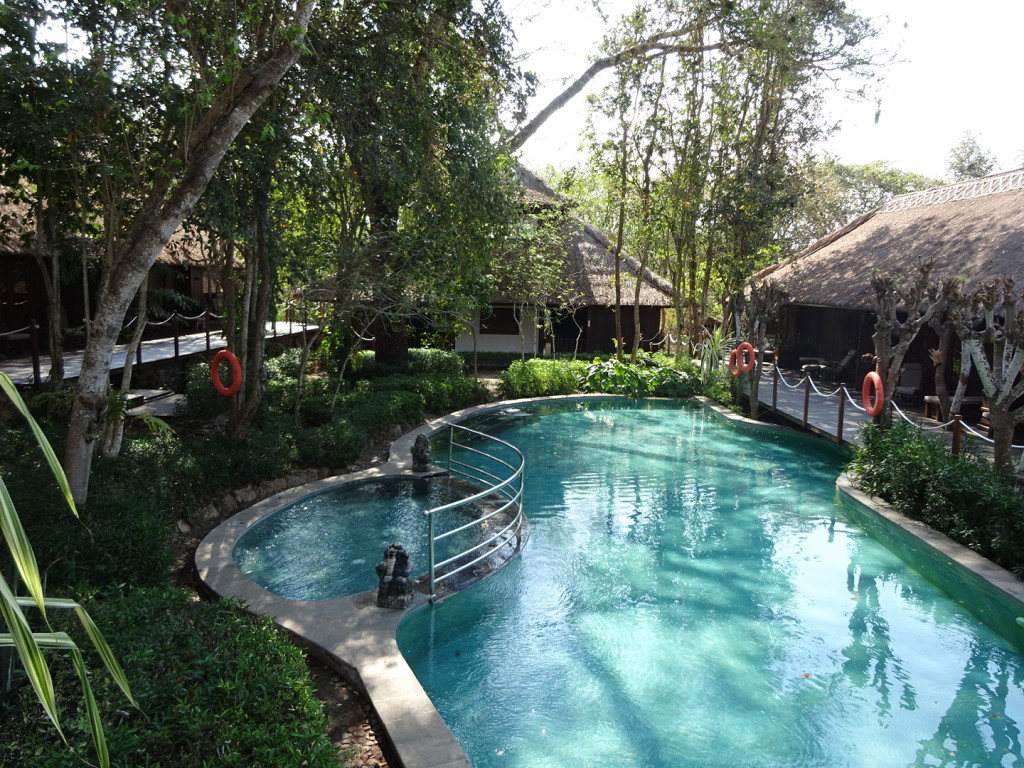 Immediately outside our room. Yeah, that’s right, a pool AND a hot tub. 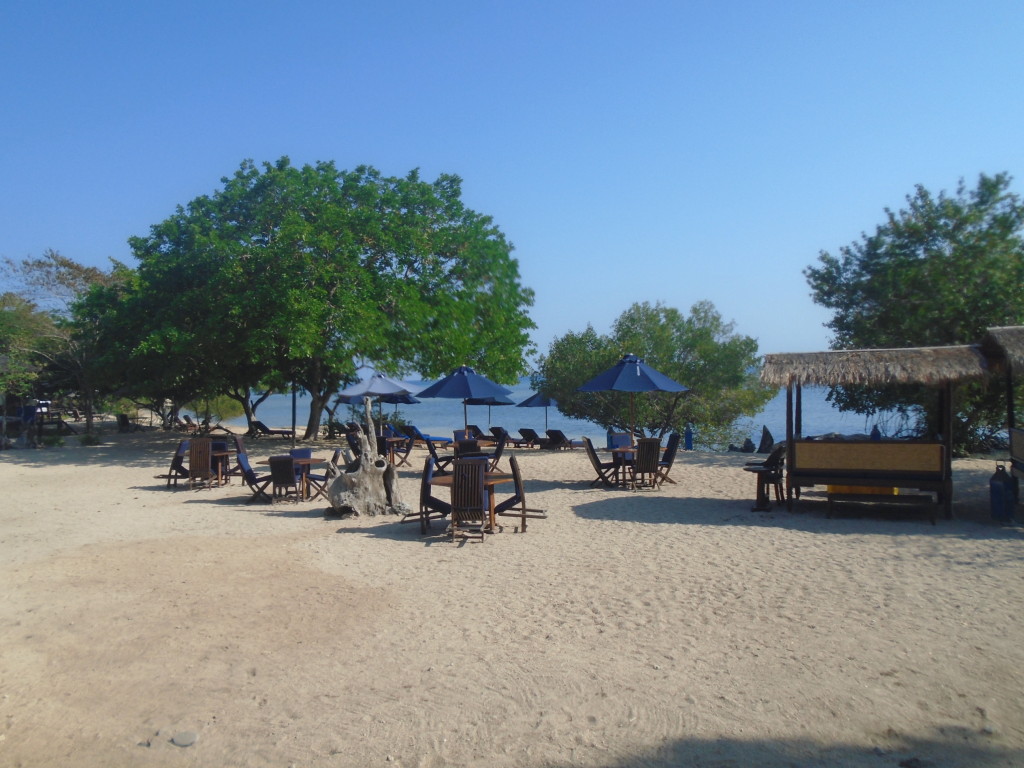