Walking around the old town area of Barcelona, we found street art EVERYWHERE! I’m seriously talking about every alley and almost every street…but…there was something a little odd. Something just a bit different from the other cities we’ve explored. The street art is only found on the doors, not the walls of buildings! Seriously, the walls are pristine, but when gates close or doors shut, the streets explode with color! 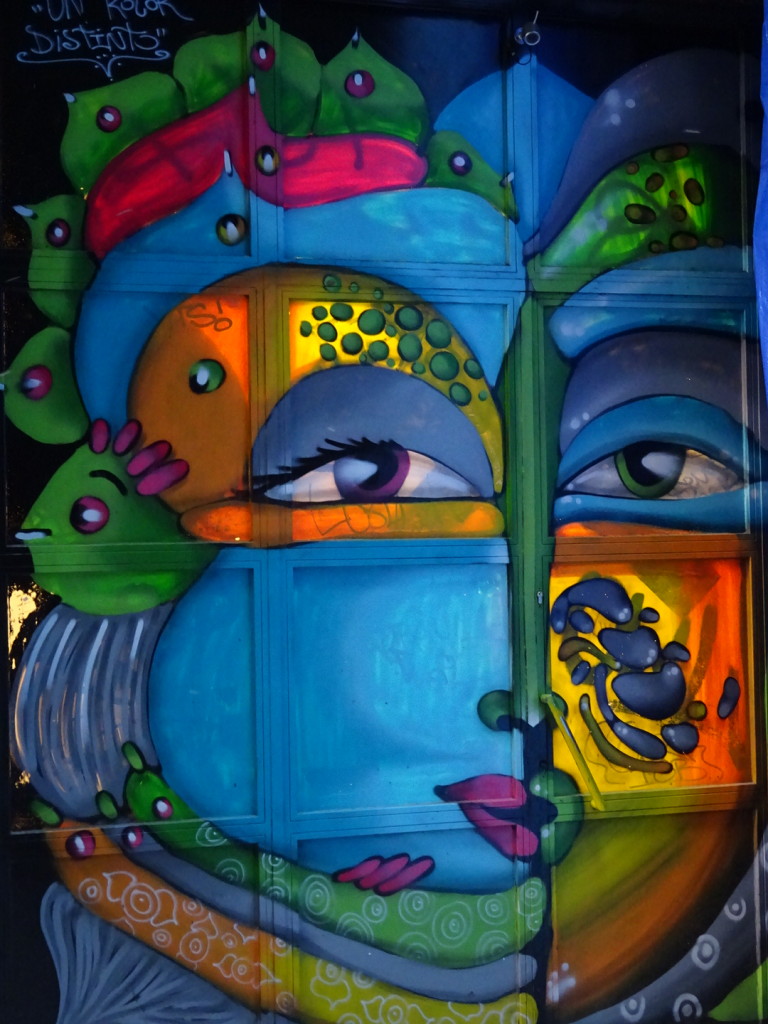 Why? Well, taking a street art tour with Nicole of Barcelona Street Style, I learned that the old town walls are owned by the city while the doorways are owned by individuals. What does that mean? Turns out that the city imposes HUGE fines or even jail time for defacing the old buildings while door owners are often open to having them “improved” with a little artwork. It’s kind of interesting – threats from government rarely seem to stop folks in other cities, but the artists of Barcelona seem perfectly content to keep their work in the legal doorways. For those who aren’t big fans of street art, perhaps it’s the best of both worlds: the classic architecture remains unmarred and even the doorway art is often hidden when the doors are open, but businesses and individuals can still allow their personal stamp when the doors are closed. For me, it meant going out in the mornings or late evenings to see the most art! 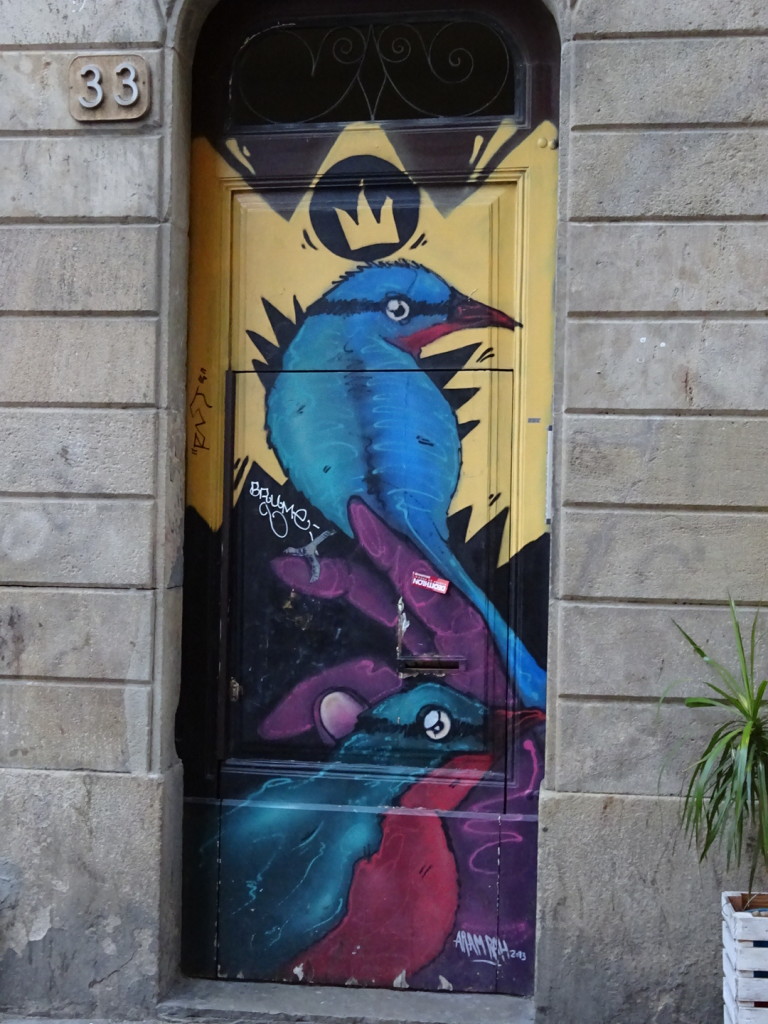 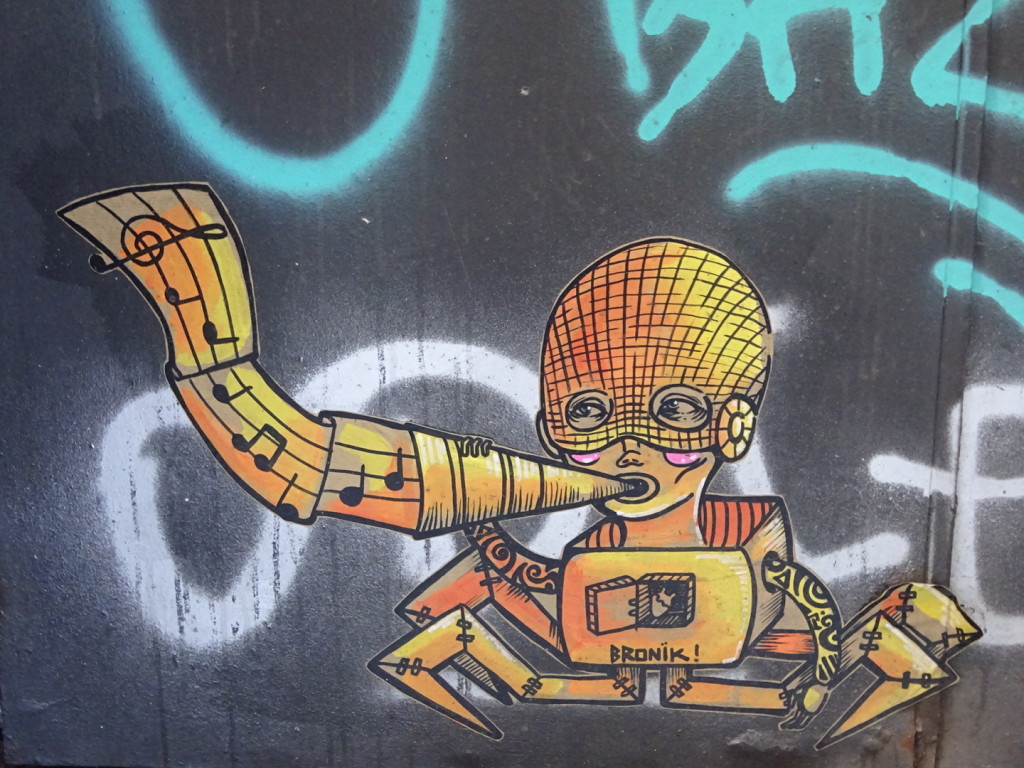 Artist Bronik! sings out the praises of Barcelona Street Art!

Exploring the older part of the city (never got out to other areas, though there’s supposed to be plenty more works out there to find!), a number of artists are pretty well-known with lots of their pieces filling the doorways. Let me start off with one of the most prolific, Bombzone. Just one shot will probably tell you where he gets his name… 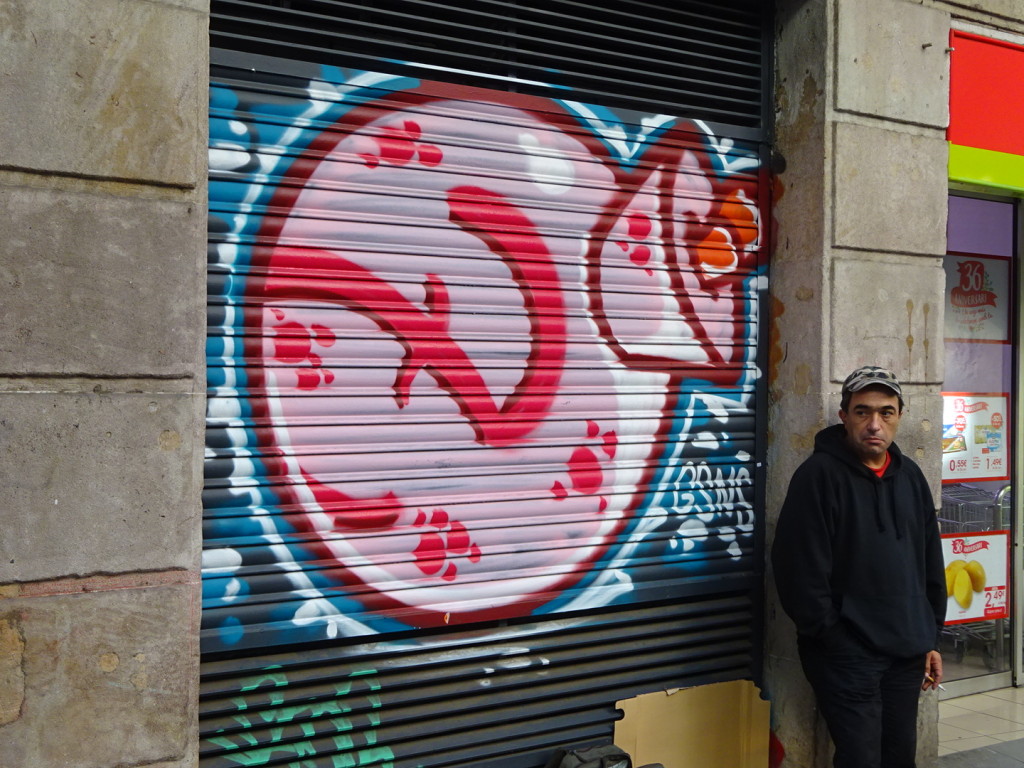 Now why would he call himself Bombzone… (no, that’s not him)

Bombzone’s work was all over the place! Some of it was quick stencil work, but most of it was free-hand spray paint with some really fun variations.

My favorite of his.

An older piece done on tile. This was not so uncommon: artists painting on tiles or wood panels and gluing them up on walls. Not sure if that makes any difference if you get busted.

Then there was Onergizer, known for his popsicles with a bite out. Like Bombzone, you couldn’t go too many blocks without passing his work. 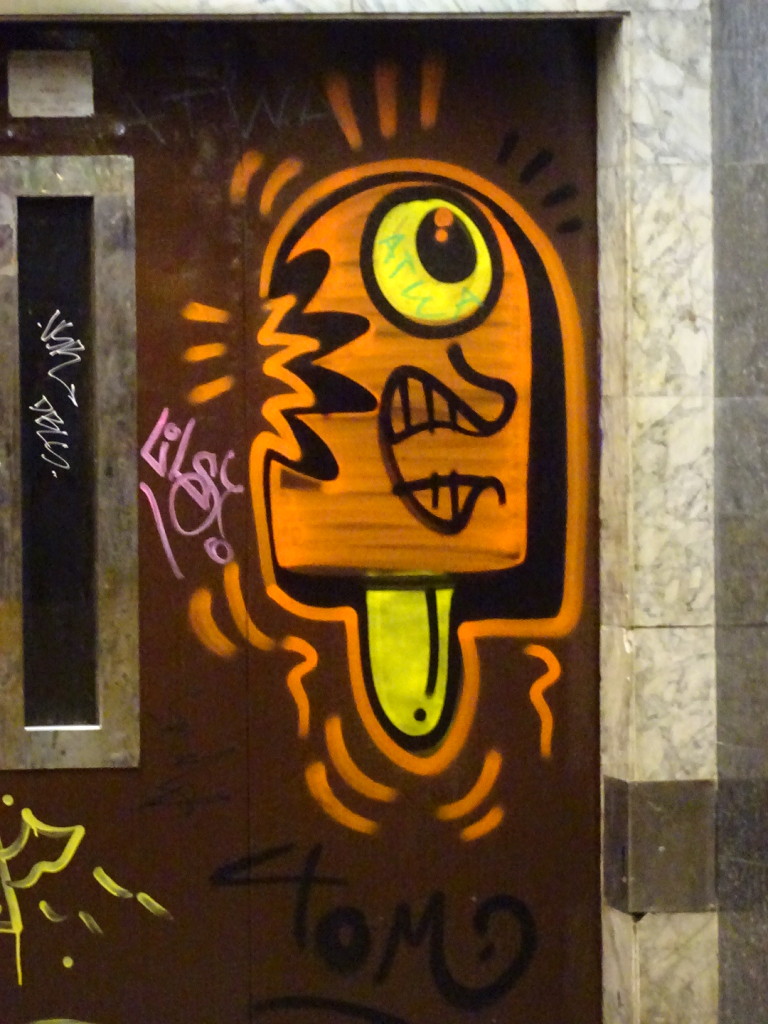 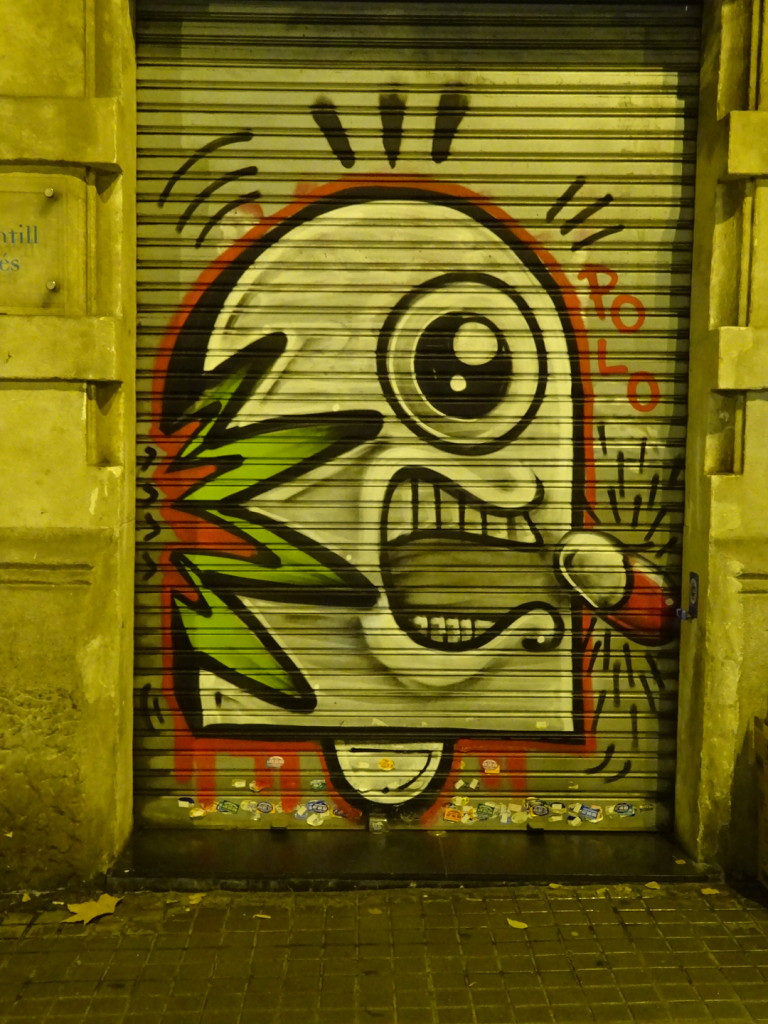 Sorry some of these are so dark. The perils of having to take photos at night when the gates are down!

One of my favorite artists has this unique shape of person that he throws up around town. El Gordo (“the fat one”) draws a fun character with a chubby body, blocked off arms and legs and two unevenly shaped eyes. 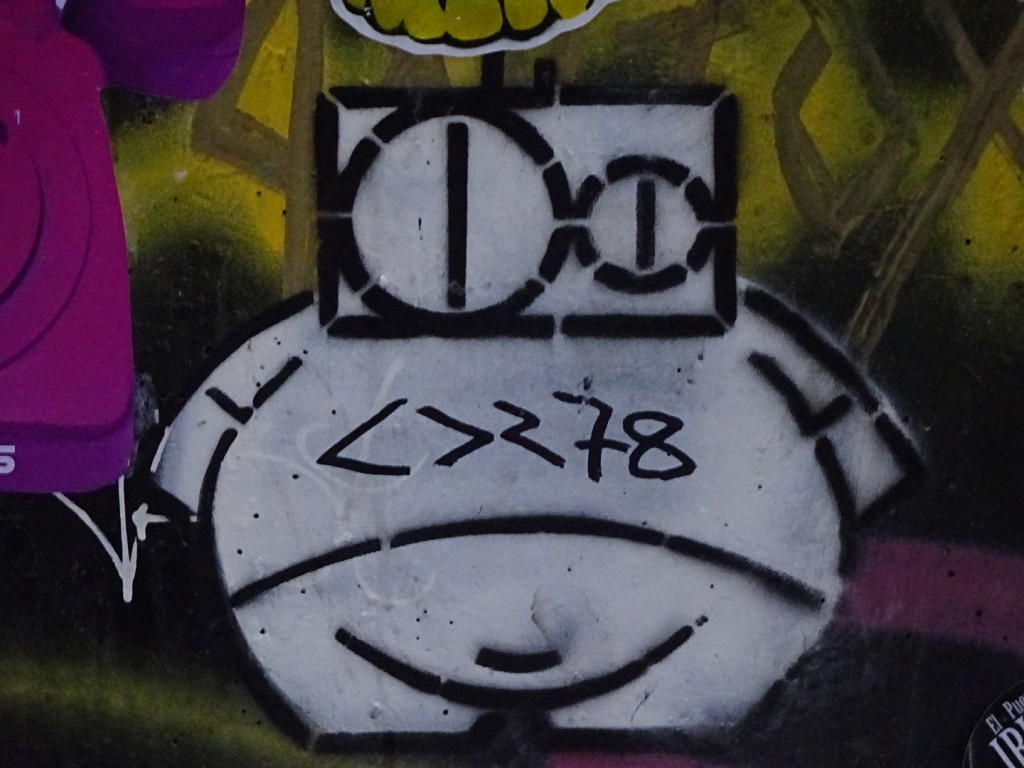 Not sure why the character appealed to me so much…maybe it just felt kind of innocent? Most of El Gordo’s pieces were spray-painted, with a few stenciled or put up as a sort of tile. I really enjoyed that he had a little variety to his designs, but they were all DEFINITELY El Gordo. 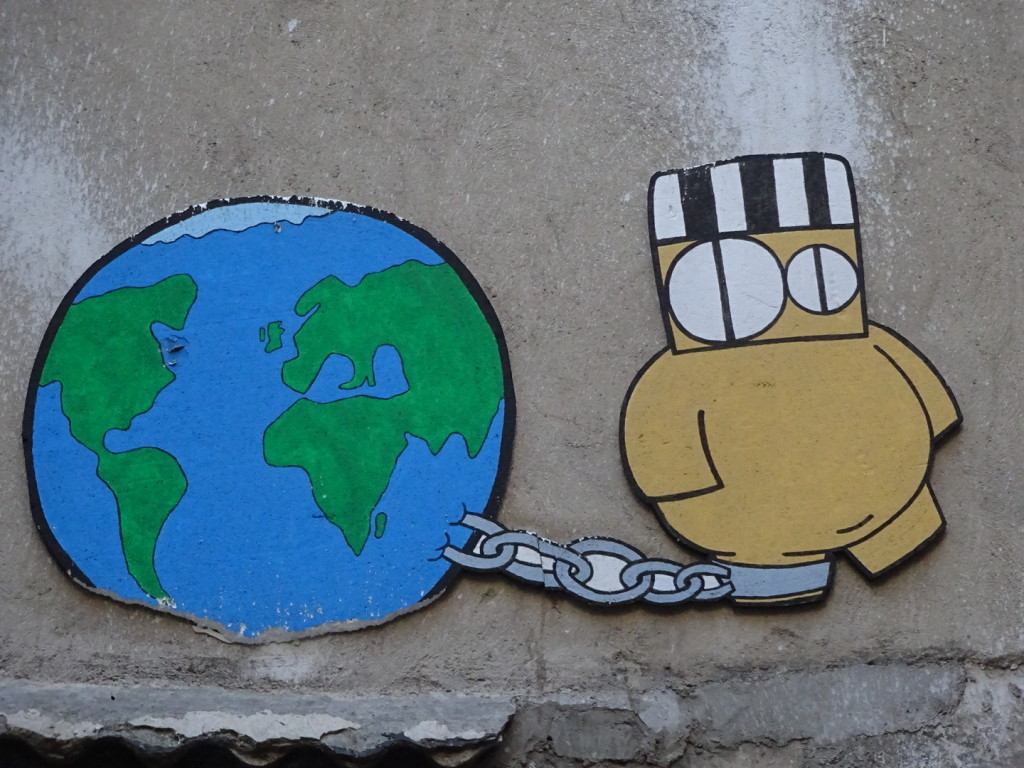 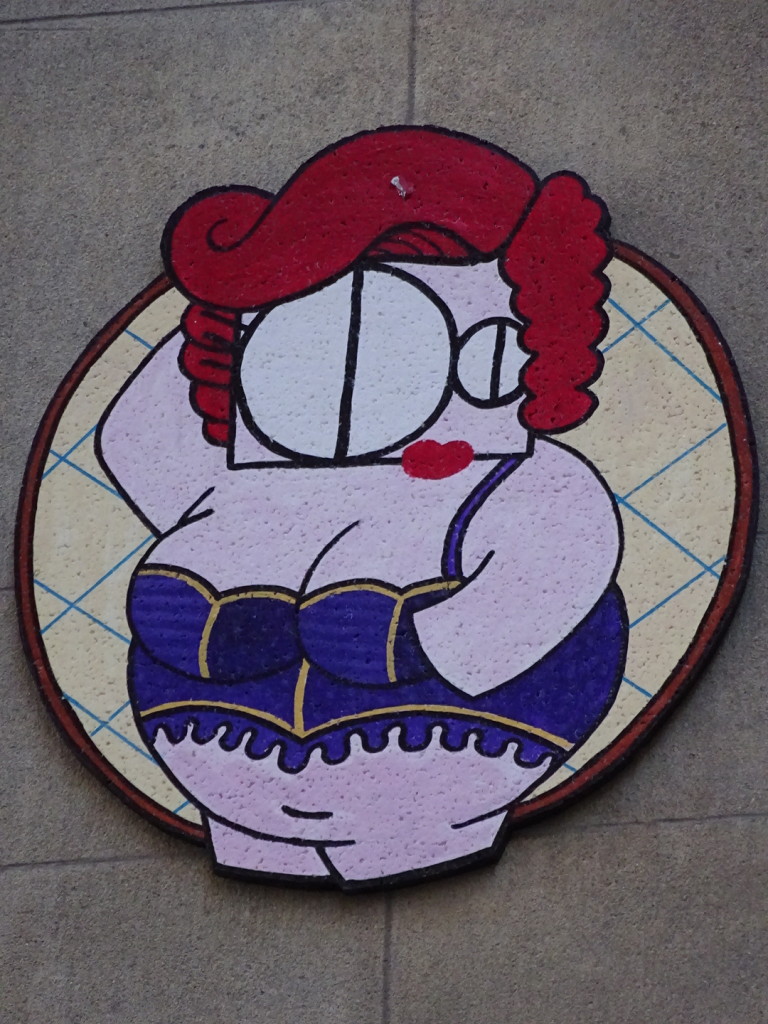 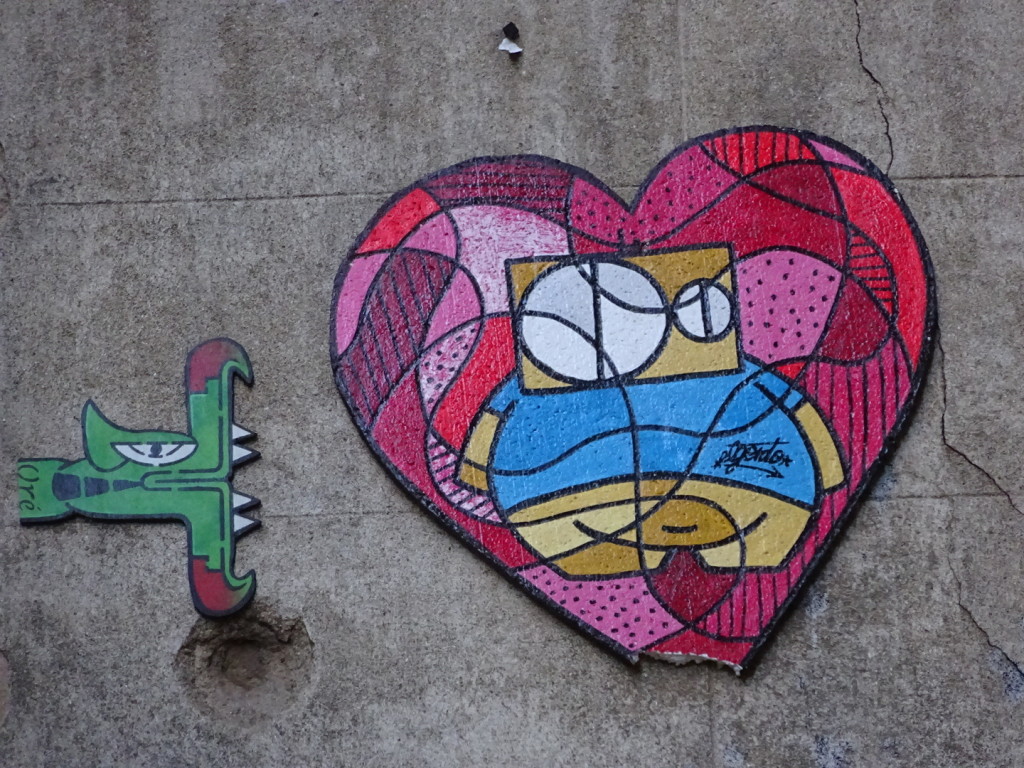 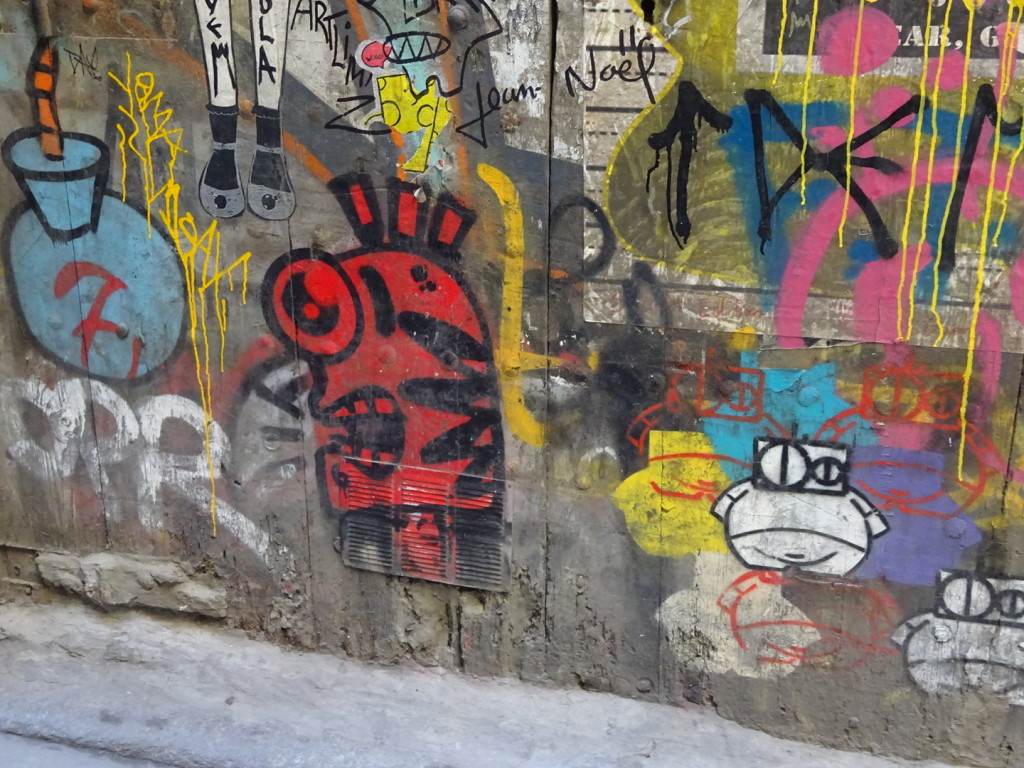 Onergizer, Bombzone and El Gordo all in one place! Now THAT’S a fine collection of art!

Talking variety while keeping to an obvious style, the paste-ups of an artist named Mischief fit the bill. She creates designs in her studio, prints them out and then pastes them on the walls, kind of like stickers. According to Nicole, they don’t last too long as she doesn’t use a great glue. I guess there must be all sorts of glues that might work – never occurred to me that you’d need to experiment to see what works best on which surfaces! The more I learn about street art, the more the artists’ skills and techniques impress me. 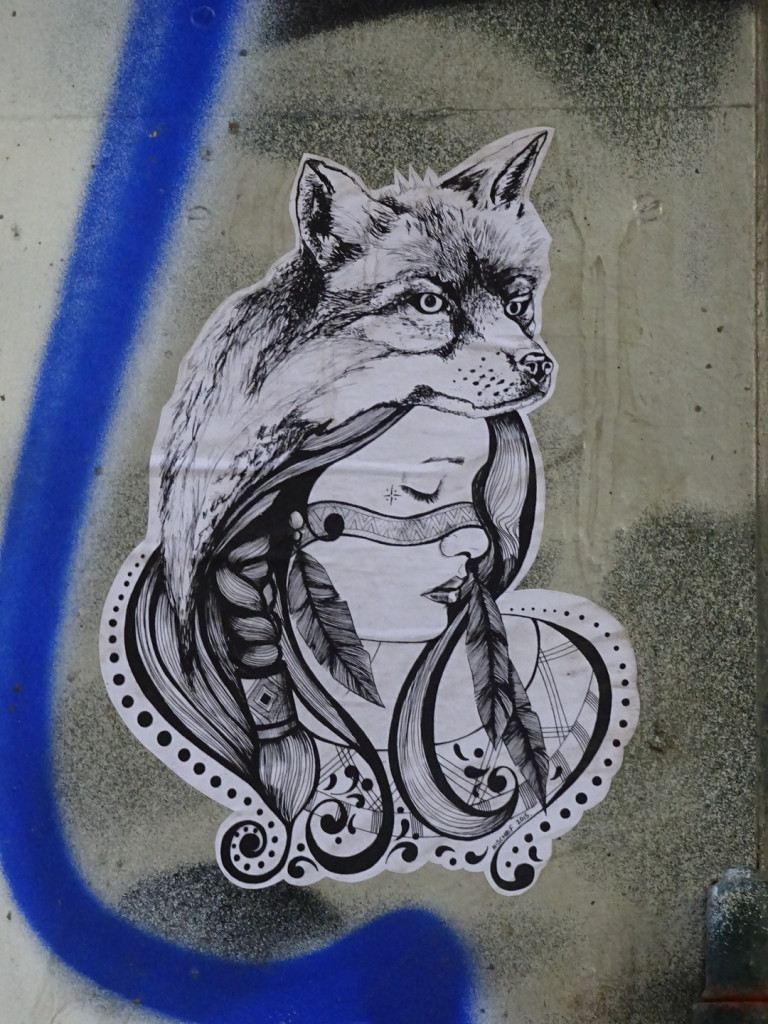 A prime example of a Mischief paste-up (i.e. – a print out of a design that is paste-glued to a wall/door/etc.). 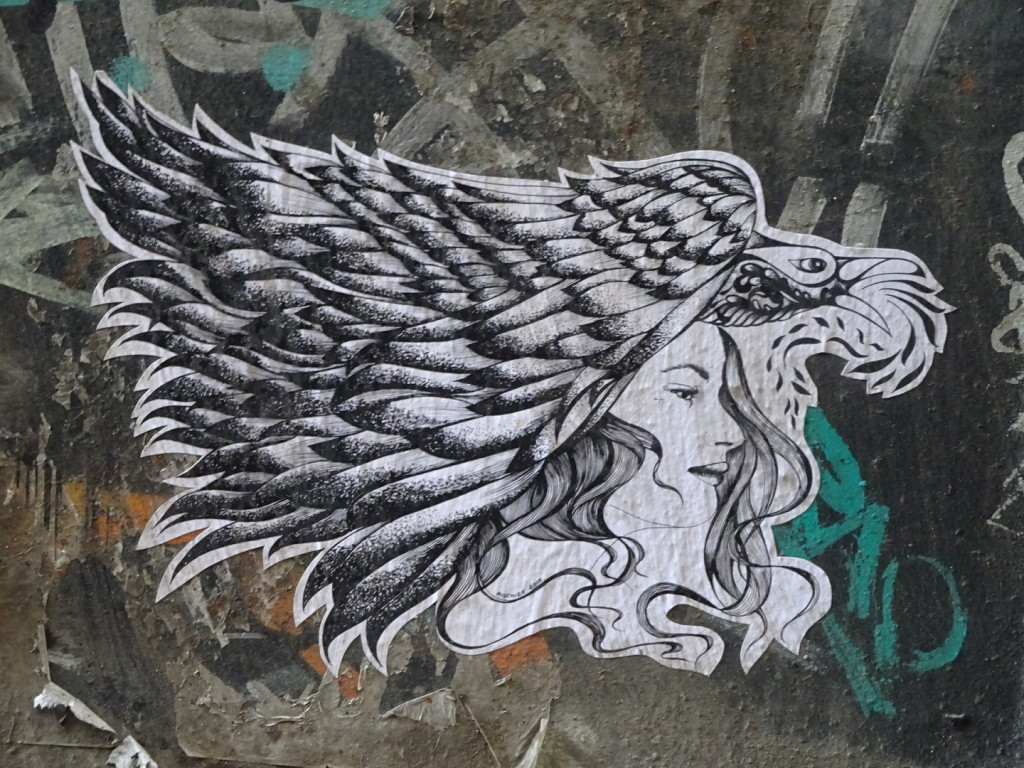 This series of work seemed to focus mostly on women, though with a few men, in a Native American vein. They combined humans and animals, presumably their totems or spirit guides. 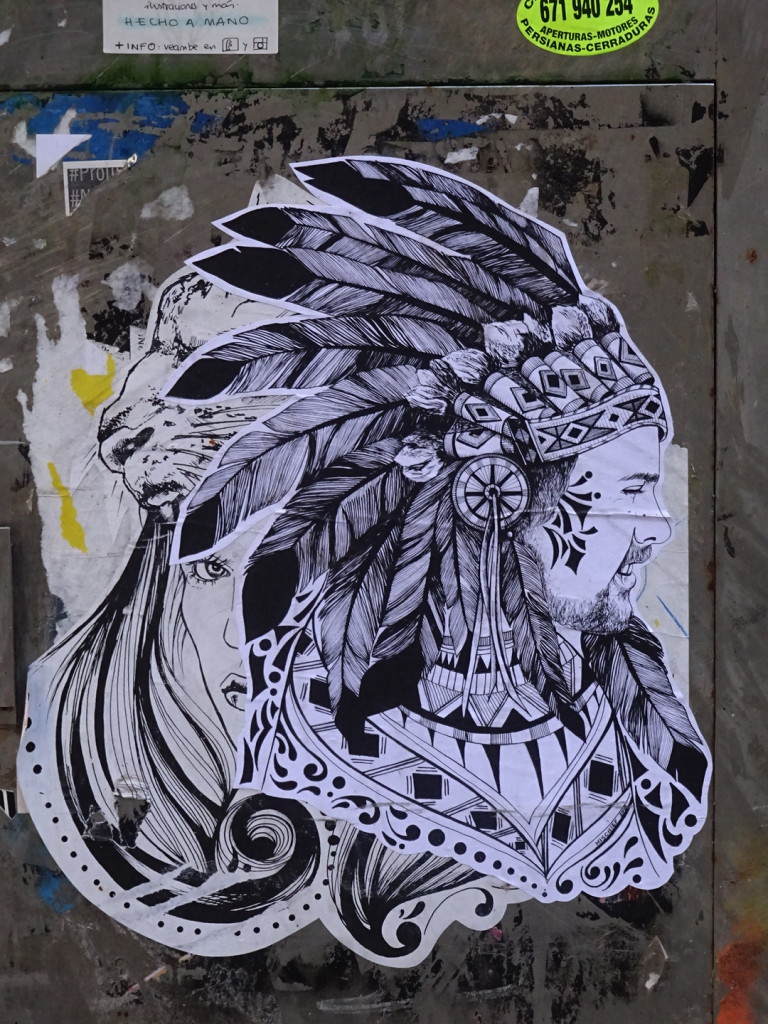 Unusual to me to see a paste-up over another paste-up by the same artist, but there you go! Maybe she was tired of seeing the old one or it was ripped?

We found a great gallery, Base Elements, which includes the work of some of the street artists for sale (you can order them online!). Pretty cool! Wish we could have been able to support the artists with some purchases, but it just wasn’t feasible. Now that we’re back in the US, though, perhaps we’ll be able to support some local folks. You know I’ll be blogging about THAT when the time comes! Next post, though, more Barcelona street art including some of the other artists Base Elements carries. 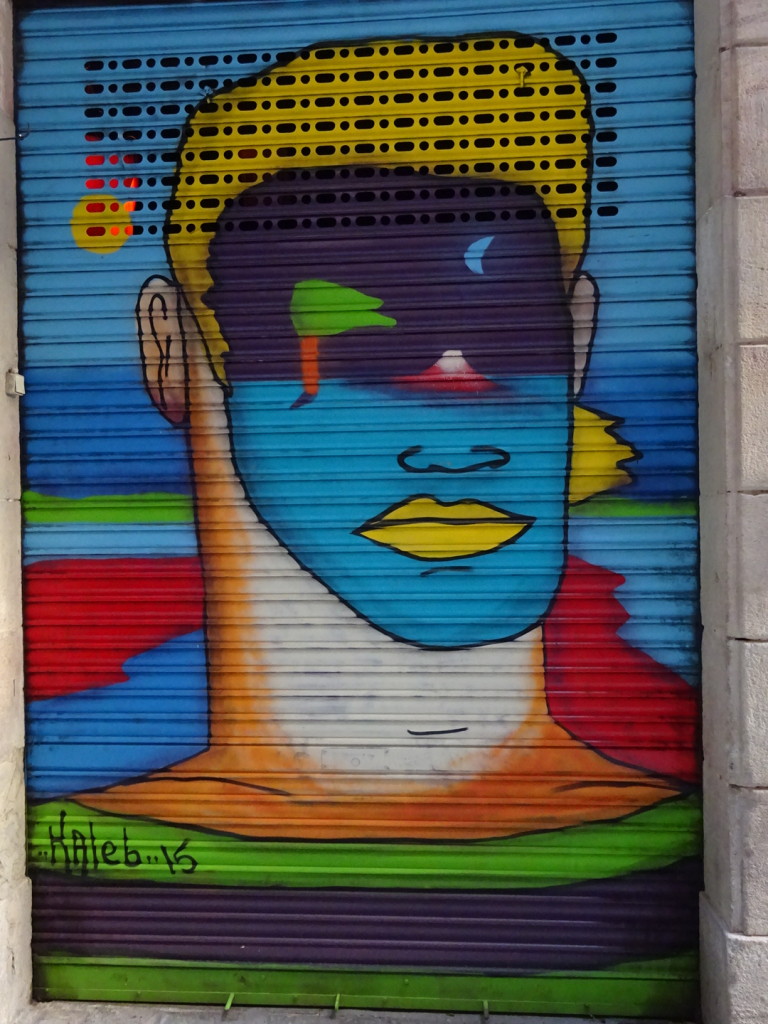