The Tale of Two Karens

Amsterdam was all about friends joining us in our grand finale of the Big Trip, particularly two named Karen (hereafter “Howie”, from Minneapolis, and Karen, from Anchorage, to make things easier). As an added bonus Aunt Janice came, too. She’s not really our aunt, being the aunt of Anchorage Karen’s husbands, but she’ll always be auntie to us!! It’s unlikely you’ll ever meet a cheerier traveling duo than Karen and Aunt Janice. WARNING: Your face will hurt from smiling while being around all three of these women! Brace yourself.

We had jam-packed days in Amsterdam that won’t possibly fit into one blog. Besides, there’s only so many times you can write, “and then I laughed so hard my pants unsnapped!” 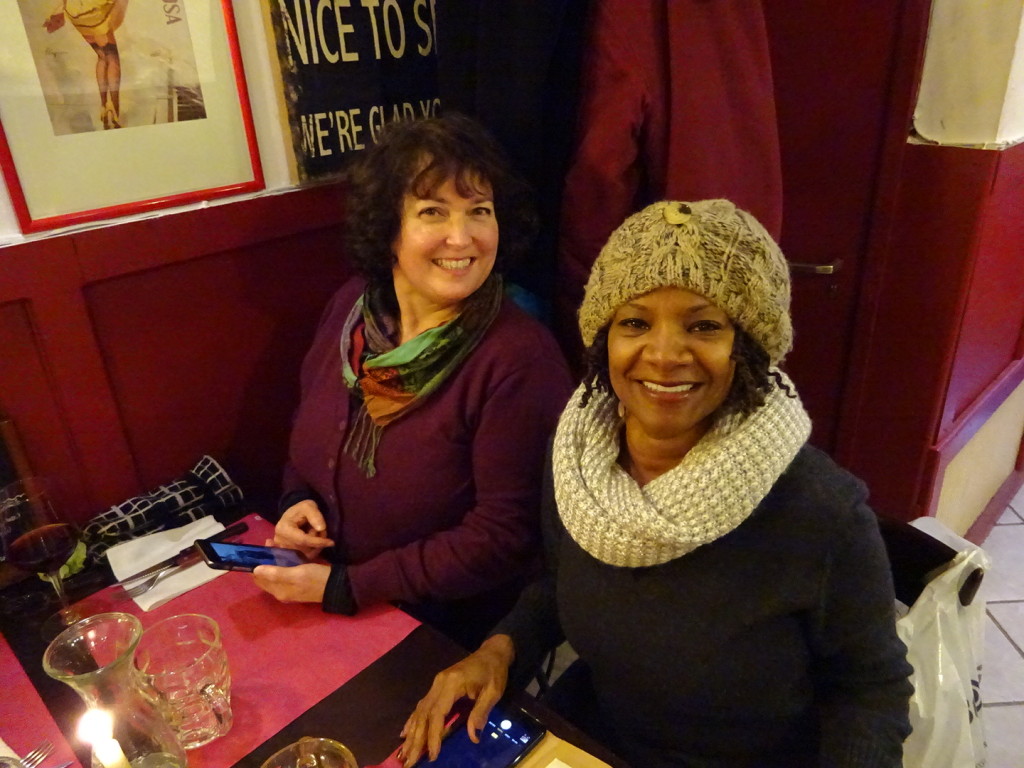 Lunch in the “red wine district” with Karen and Aunt Janice…just steps away from Amsterdam’s famed Red Light district, which we recommend you skip and go straight to the wine. 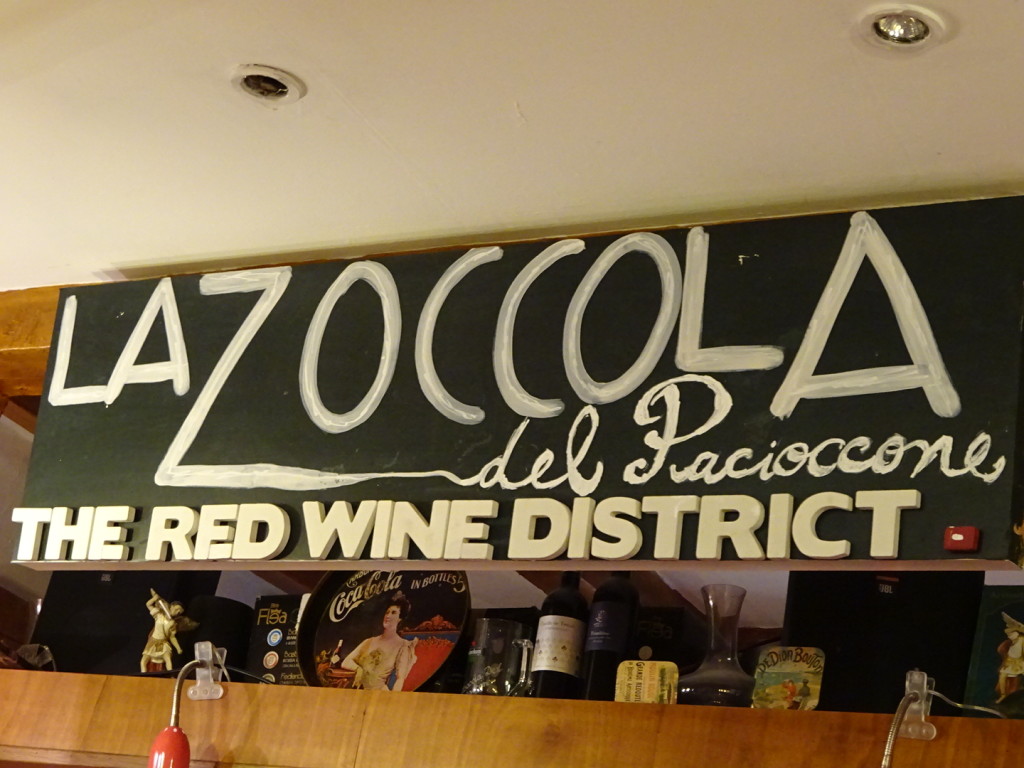 Pizza, wine and beer: those are your choices.

Aunt Janice is always in style, striding through the city in her heels while the rest of us limp along in our trail runners. Don’t know how she does it! 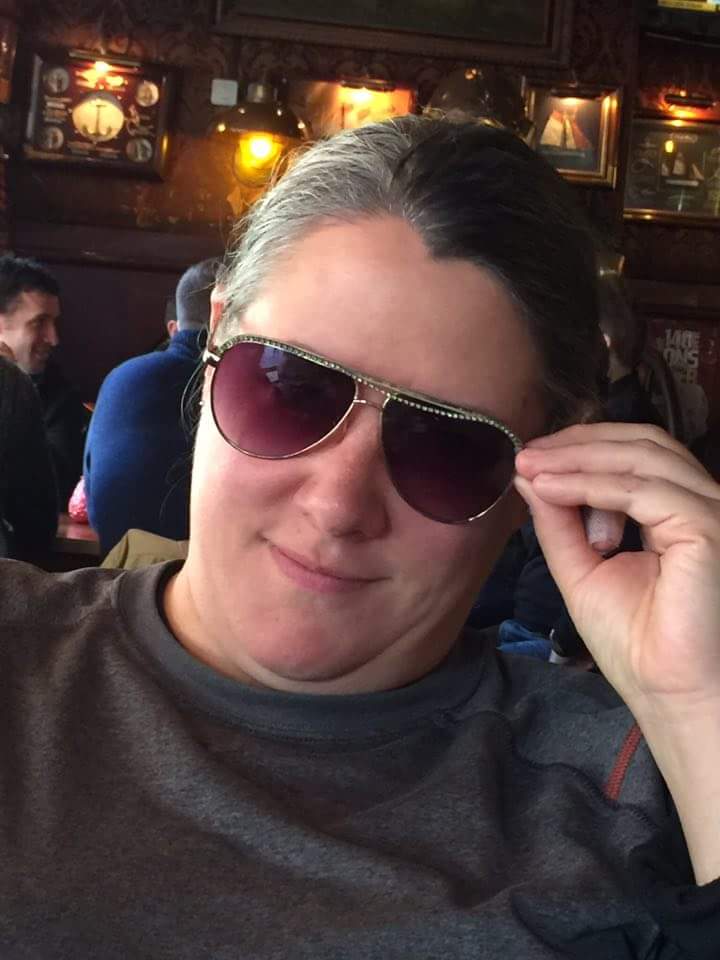 I tried to keep up with her…almost got it.

Like a few other folks, Howie swore at the beginning of our big trip that she’d meet us on the road somewhere, so when she heard we’d be in Amsterdam she made darn sure to stay in the city long enough to spend a day with us. She also brought her friend Nyssa who we’ve been hearing about for-ever! So good to know the wonderful person behind the non-stop stories! 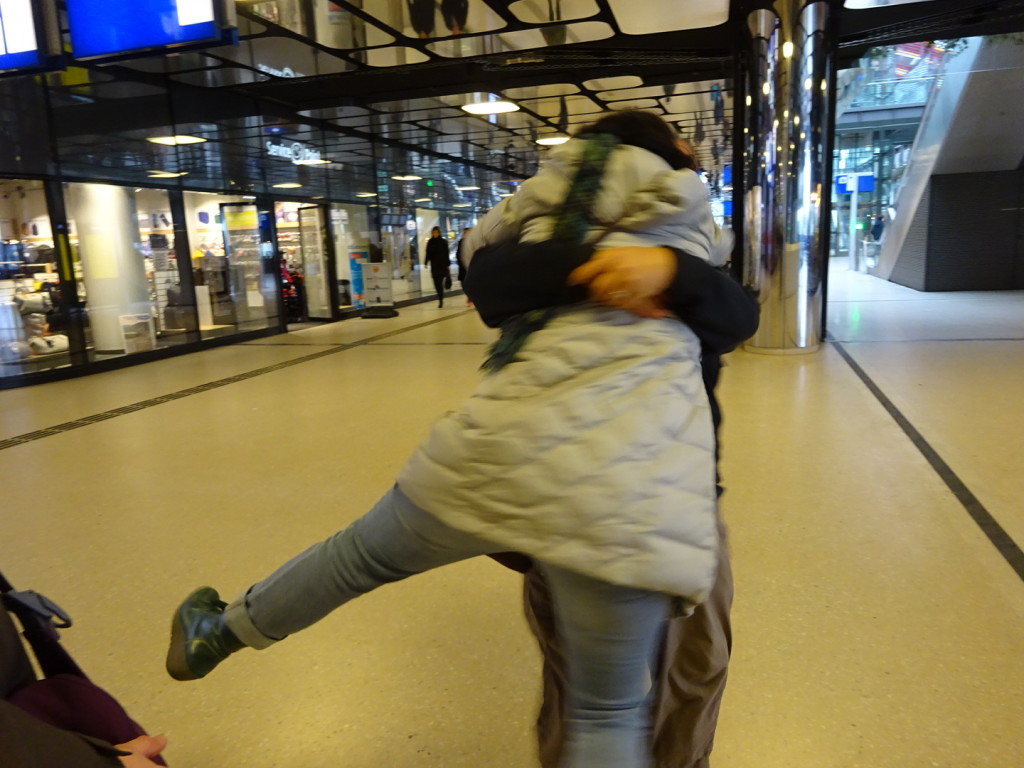 We were more than a little excited to see each other once again. Skype is just not that huggable.

And if all that weren’t enough, having Aaron and I, Karen and Aunt Janice, AND Howie together meant that we had FIVE members of the Worthy of Hope team in one non-Seattle city! We all volunteer and raise money as a team for brain cancer research. Once a year we get together and do the Seattle Brain Cancer Walk together. Boas are our thing and you can find us by following the purple feathers that fall to the ground (ohhh, if only we could afford the purple ostrich boas from South Africa, maybe that wouldn’t happen so much!). This week you could have followed our feathers around Amsterdam, starting with a fantastic dinner and loads of laughter. Oh my gosh, I didn’t even try to keep my pants snapped. 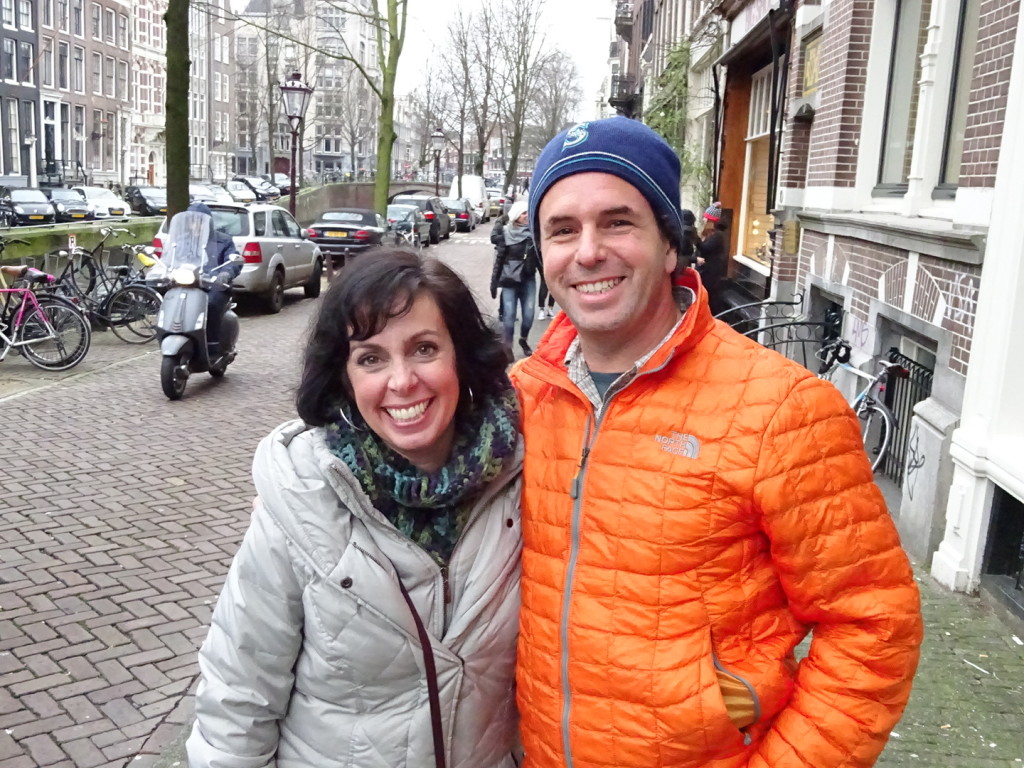 We had such an AMAZING time with Howie. Fun follows us and Joy follows her – combined it’s really too much for most mortals. My face hurt from smiling so damn much!

We only had one day with Howie, but it was a glorious intro to Amsterdam as she took us on a tour of all her favorite haunts: cheese shops, chocolate shops, and bookshops. Together we were introduced to one really cool spot called The Otherist. Crazy, sciency, manly, cool…stuff. The owner said he wanted to open a shop based on a Curiosity Cabinet and it totally showed! I wanted one of everything.

A little about Amsterdam… The city is built on bog land. Yep, reclaimed sea/bog. With that base and the original pilings being made of wood, let’s just say there’s a touch of whimsy in the way all the houses lean crazily these days. 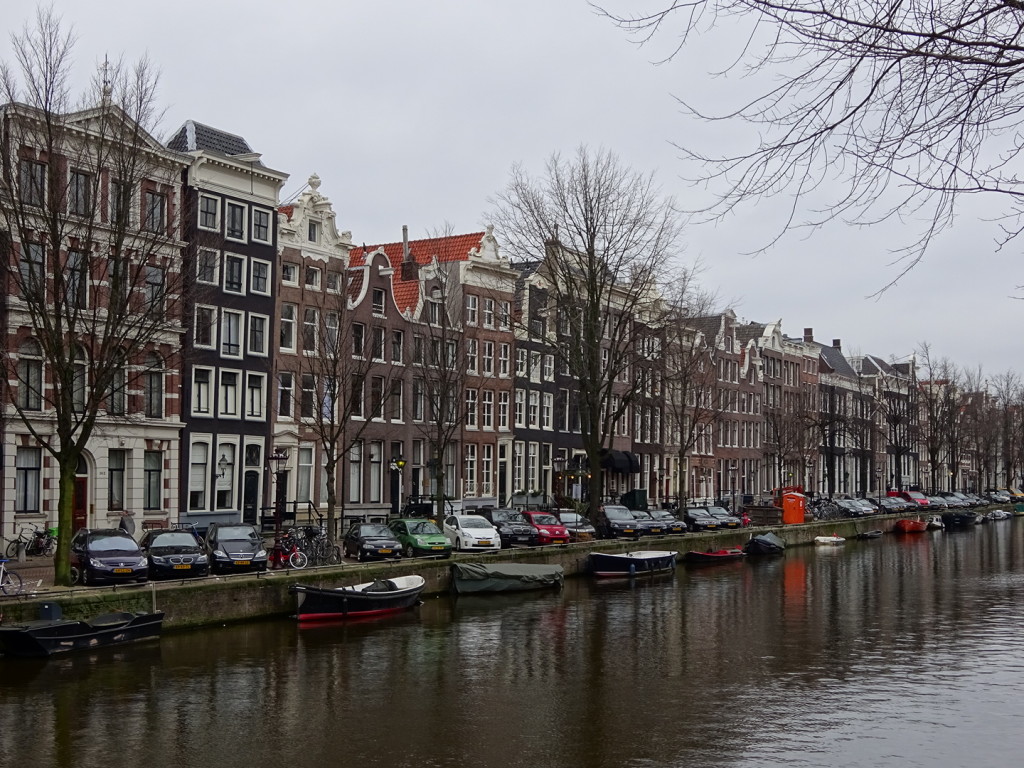 Lots of canals and row houses in this town.

Canals were everywhere! Never been in a city so criss-crossed by water. 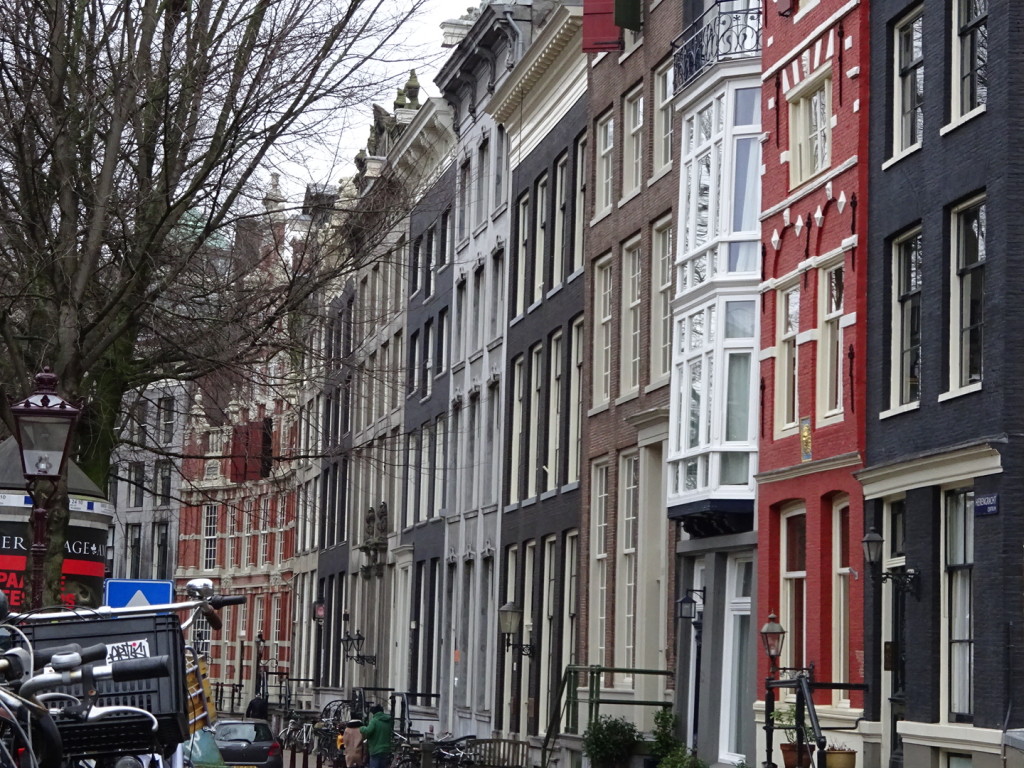 Just a wee bit of lean in this one…

Inside? The stairs are staaaaa-eeeeep! 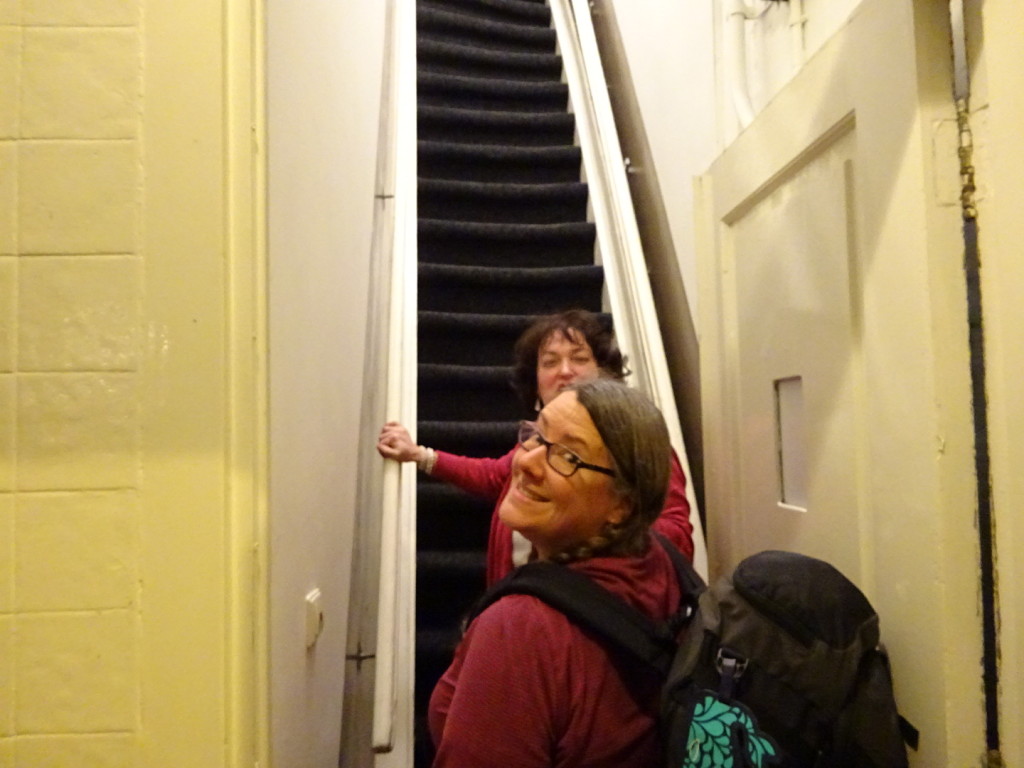 Best to just pretend this is a ladder.

After Howie left town, the rest of us started exploring like crazy! Such an incredible city. Karen got us started with the Van Gogh Museum. Accidently mis-reading the map trying to walk there, Aaron landed us in the red light district (Oh! I’m sure it was an ‘accident’), but Karen got us straightened out. In the end, she flagged down a taxi and we triumphed over adversity. It was SO worth it. There was an exhibit featuring Van Gogh and Munch (of ‘The Scream’ fame) that was very fun to see in person, but man I was exhausted from walking all over Amsterdam in the rain.

Lost in the rain, trying our darndest to find Van Gogh…we were really off base! I love that Aaron and Karen are both first-borns. They took charge and all Aunt Janice and I had to do was stay close and the day would unfold before us. 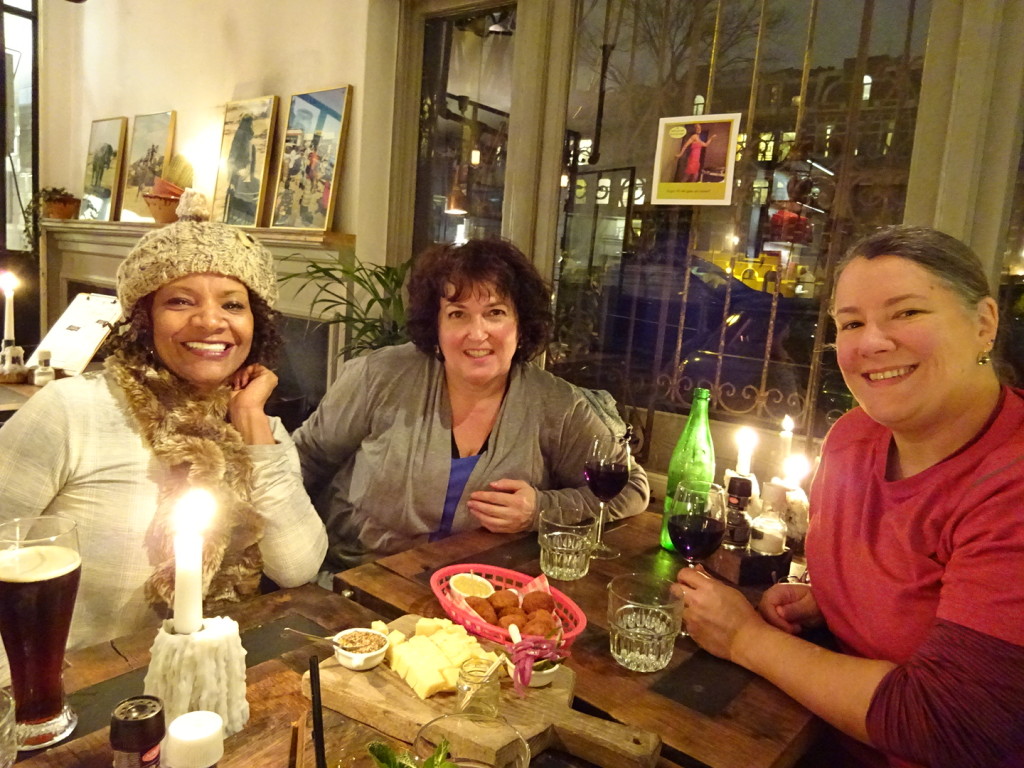 Drinks after the Van Gogh Museum was much needed after a day of walking in the rain. These are always my most favorite times – just sitting around sharing stories and laughing until tears form on the cracks of my eyeballs. More please!

All around the city there is so much to look at. Like Barcelona, it’s super stylish with art, cats, and other interesting objects in all the windows. It’s also probably over-run in summer. Add this to the places to see in shoulder or off season when shop owners are happy to have customers and the lines are much shorter. At the museum there were a crazy number of people and I can’t imagine it on a truly busy day. 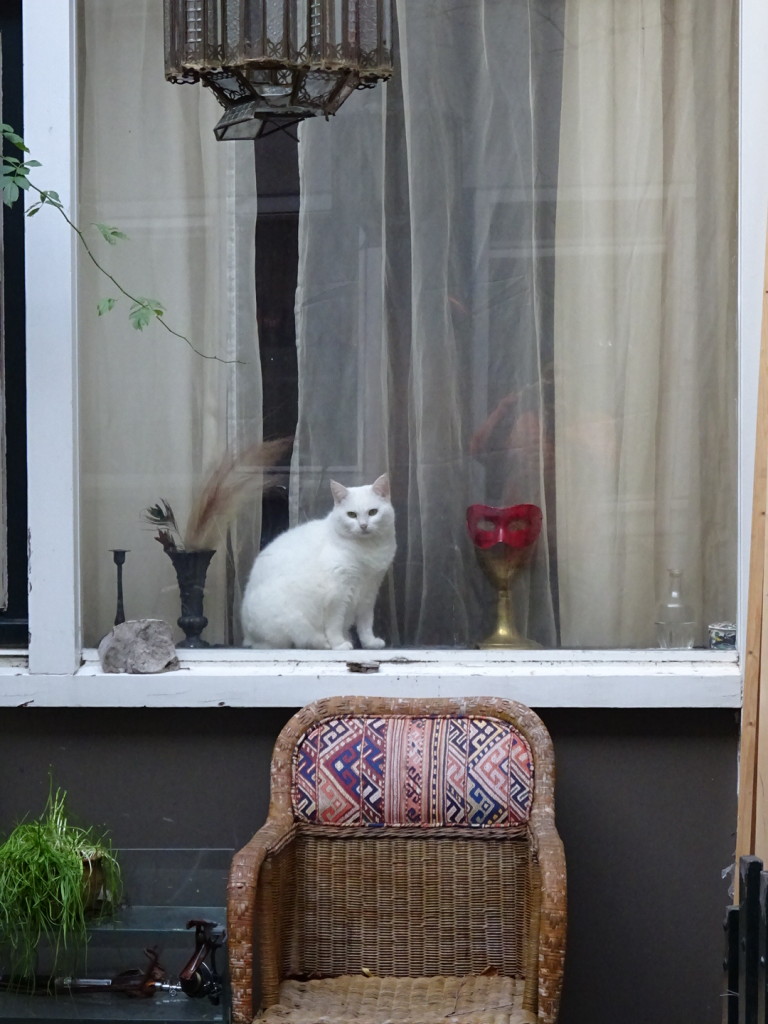 A lot to look at in this city. Cats and ladies of the night in many-a-window.

Many of the windows have quotes on them, often not so related to what’s inside. This one spoke to us.

It was the Festival of Lights while we were here. Oddly, not Festival of Lights in a Hanukah way. No, this is an outdoor art expo where the city invites various artists to create “light sculptures” in various places around the streets and canals which then light up magically at night. There were walking tours of them, but those finished before we arrived in Amsterdam. Luckily the festival was still in it’s final week and we could go see them on a night canal cruise. Sadly the rains made it hard to really enjoy, but we did our best. The theme for the Festival of Lights this year was about friendship, which worked for us. 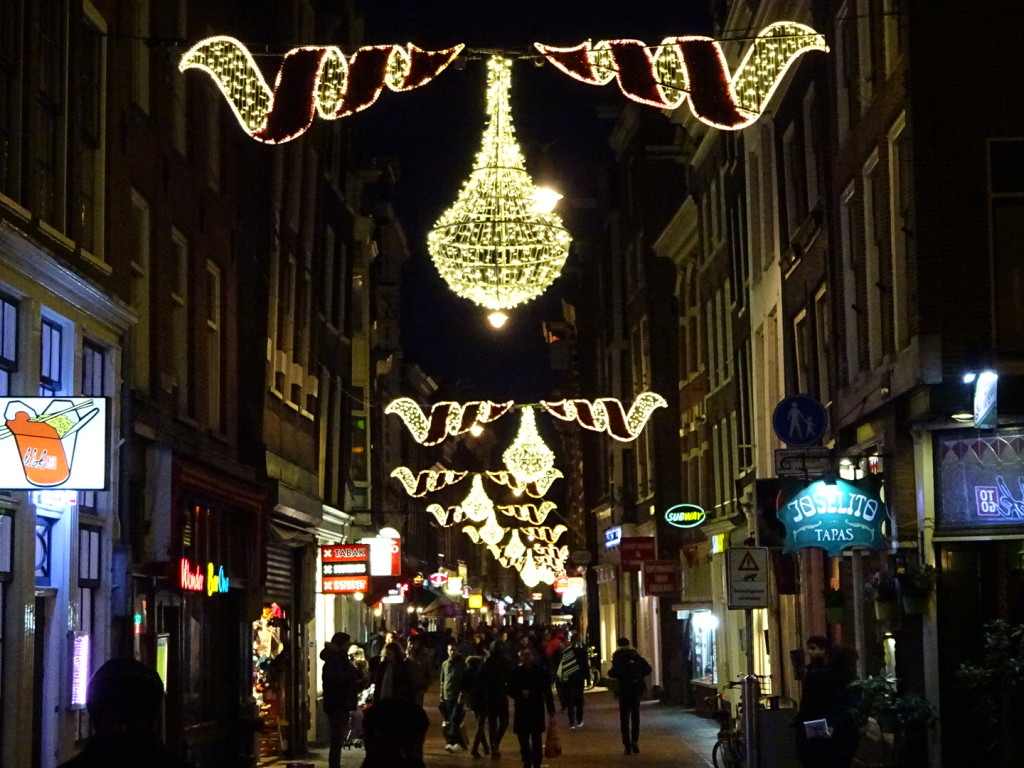 Every block has it’s own type of lights like these, strung from one side to the other, which complemented the specific light art installations of the festival. 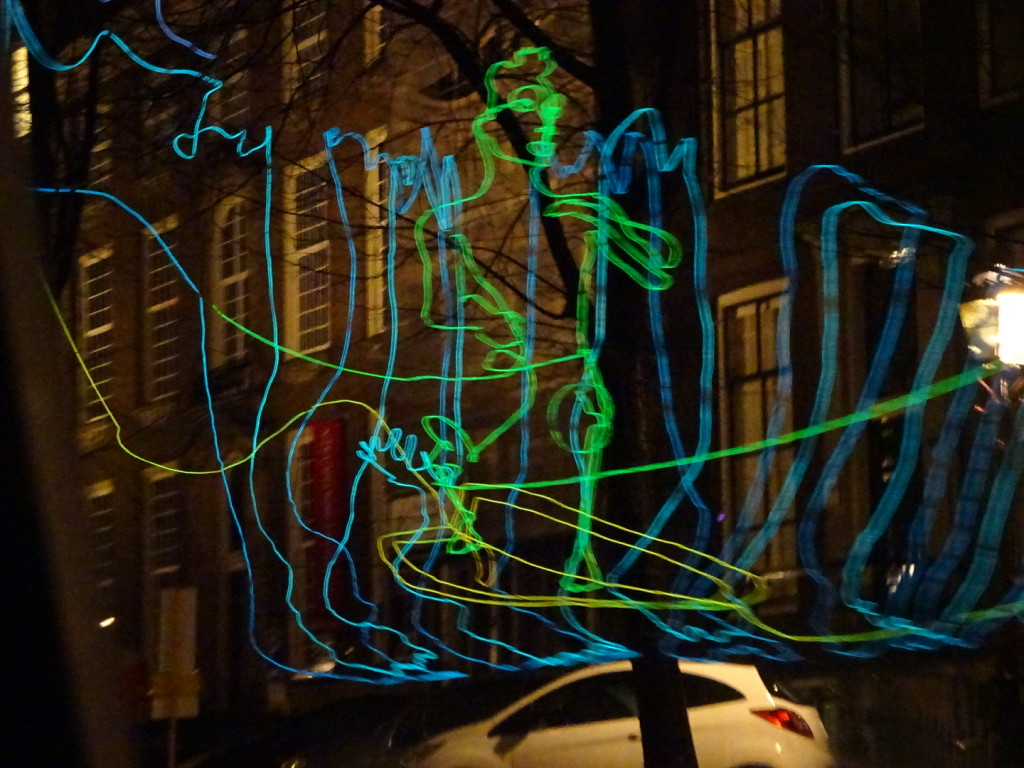 Sorry for the blur – that’s what happens when you’re on a moving canal boat at night in the rain. Look carefully and it’s a football (soccer) player. 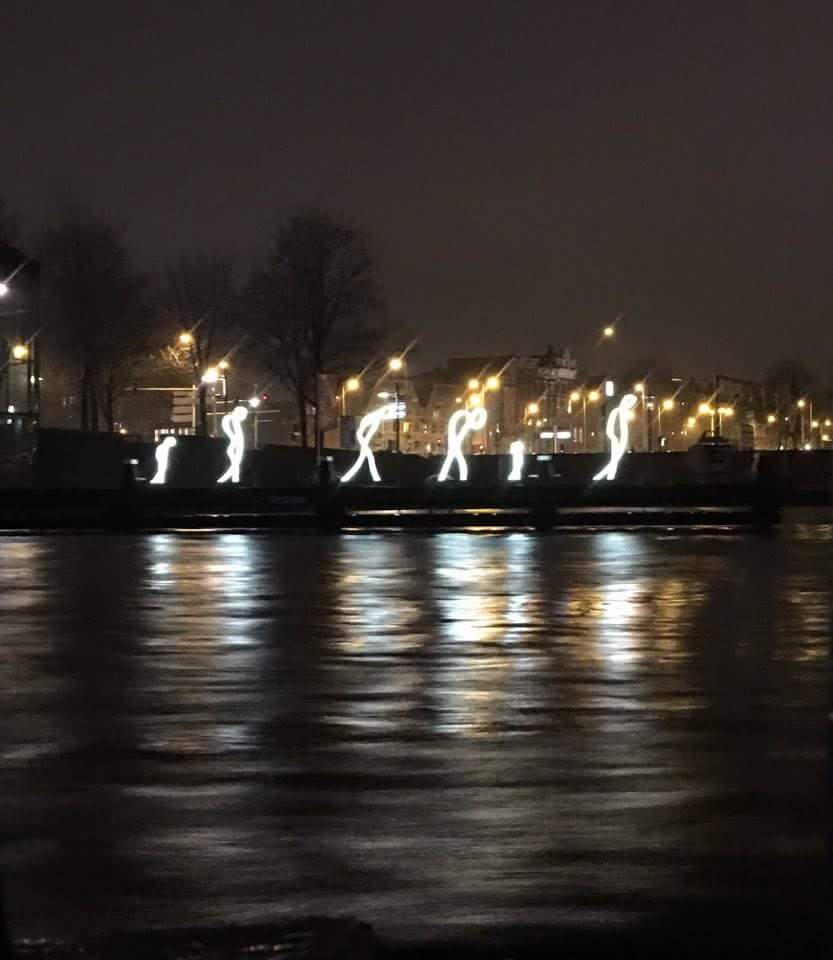 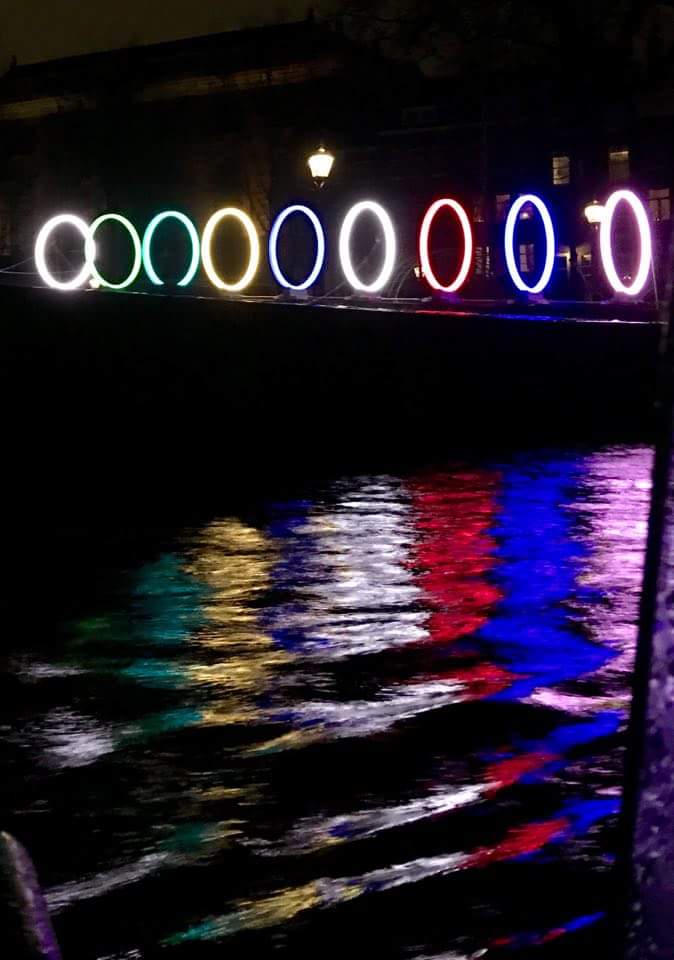 The reflections sort of out-shone the art on this one!

A couple days into our visit, we all jumped on the train and made our way to the city of Almere about 45 minutes from Amsterdam. It’s where our friend Dimphy lives. We met Dimphy repeatedly while criss-crossing South America and she had said we had to come visit if we made it Europe. Certainly not going to pass up THAT opportunity when we were so close!

The town of Almere is only about 40 years old. Dimphy, a city planner, has been there since the start actually creating the city from the ground up! Talk about a dream job for a brand new city planner! Like SimCity…only for real. Something we all loved was that in Dimphy’s neighborhood all the streets are named after old American actors, “Oh, I live on Marilyn Monroe Way.” 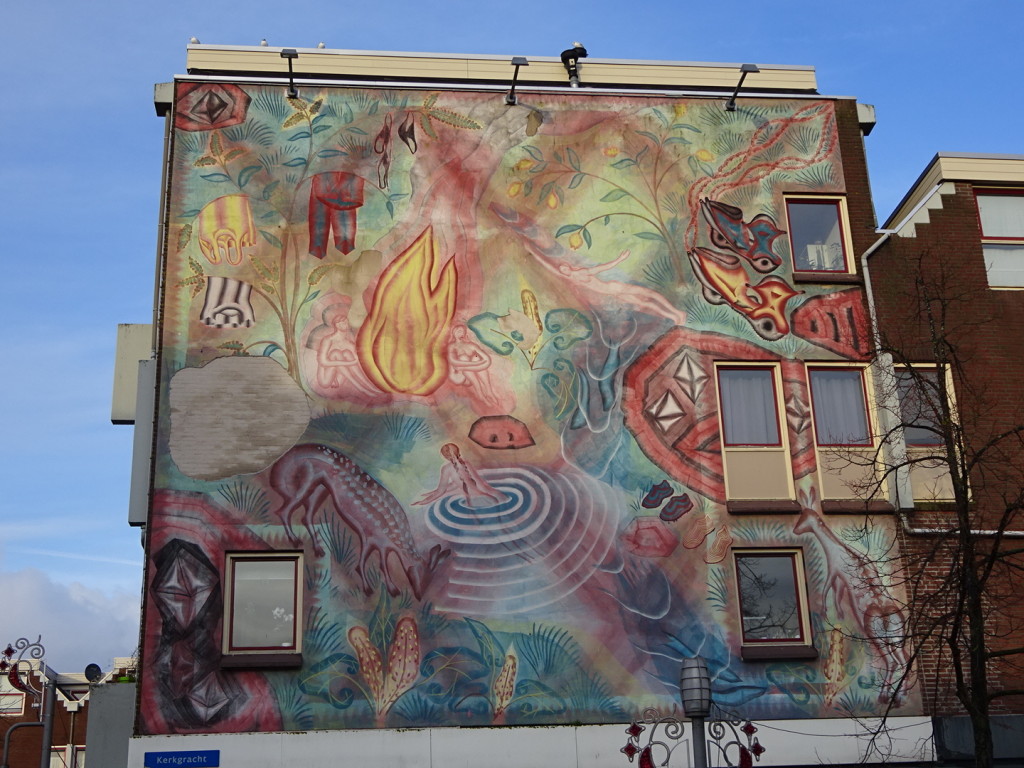 One of the fantastic urban murals we walked past while exploring Almere. 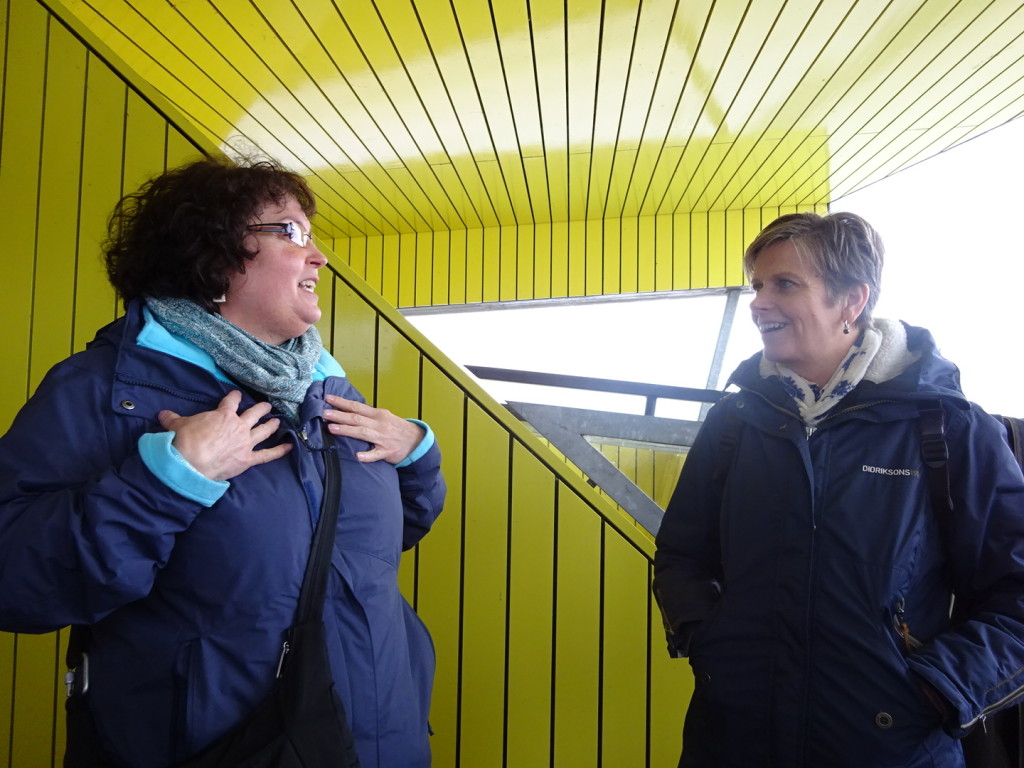 Karen and Dimphy hit it right off!

Dimphy planned an entire day showing us all around and was just trying to walk us home for a traditional dinner when we spotted a cheese store. She couldn’t of known how much our group of four loves cheese. The shop owner knows his stuff, and you don’t have to take our word for it because he has awards to prove it. He was so patient as we sampled and sampled and sampled. We made some delicious purchases and an hour later were on our way. Yep, an hour. He and Dimphy might have thought we were a little crazy, but you just don’t see stores like this everyday!

The Cheese Man educating us. 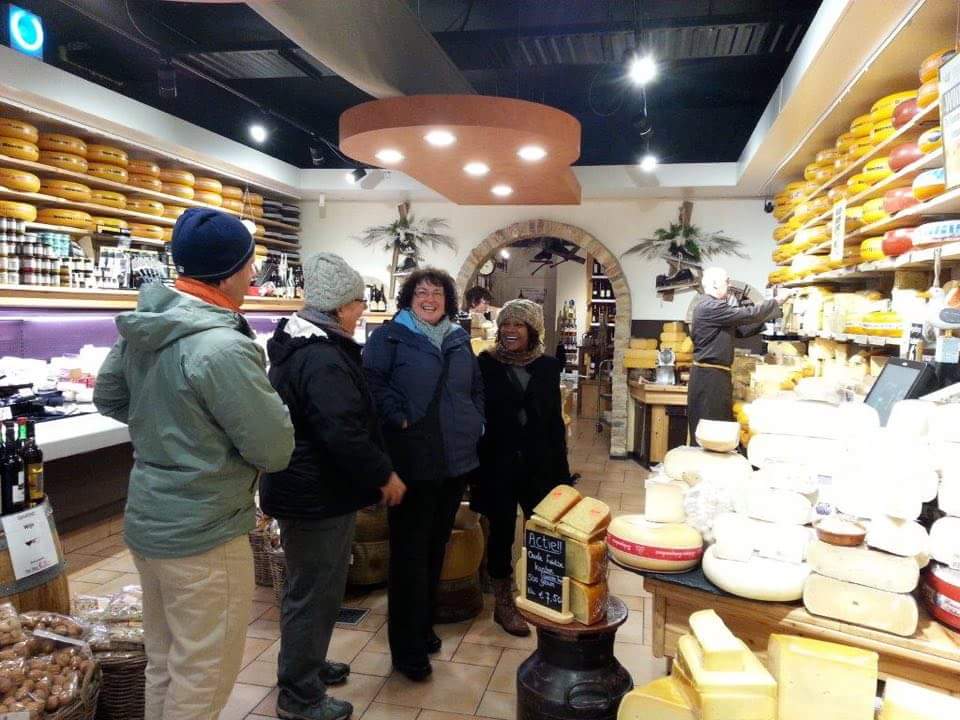 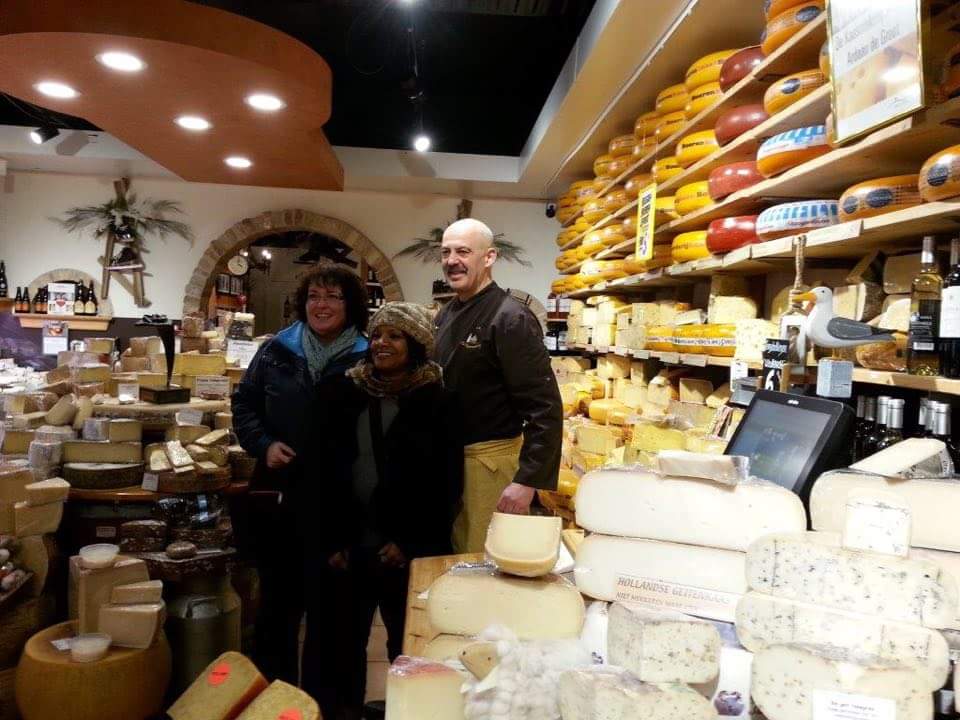 Say Cheeeese! I think Karen and Aunt Janice had to be the #1 customers of the day. Well done, Ladies!

All of us on the walking tour part of the day.

That night some of Dimphy’s friends joined us for a fireside chat. A room filled with adventurous travelers – now that’s good times! We’ve invited Dimphy to the US so I hope to bring you the second installment of this tale in 2017 when we show Dimphy around Alaska and Seattle.

Later in the week, us girls went out for tea. Our server was probably new – he did an excellent job, but was SO nervous. Poor fella, I know we’re pretty intimidating. It seemed best to not distract the new guy, cause that last thing you want is to spill the bubbles. 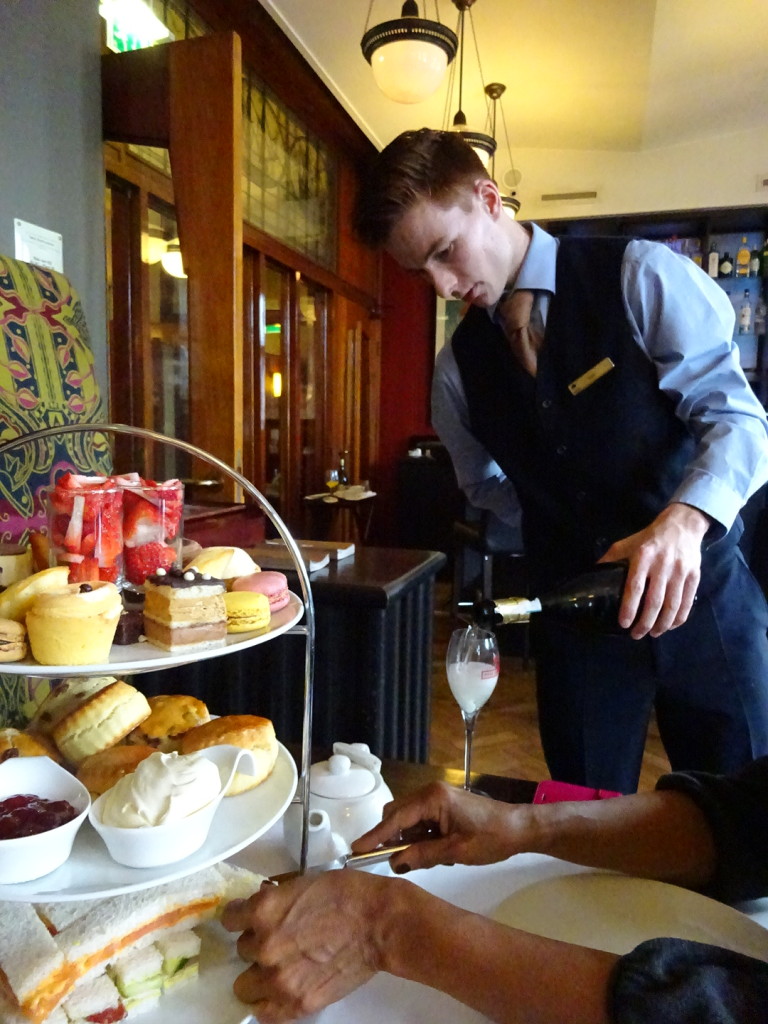 Prosecco always goes with tea. No, really – it does! 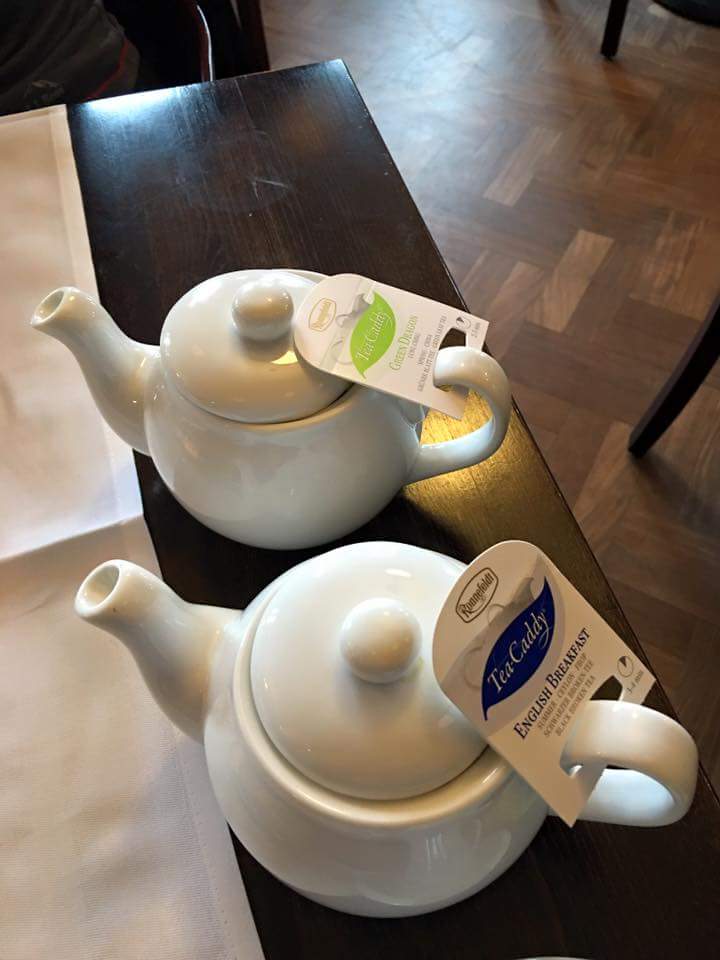 Proof we did at least order tea with our high tea.

Over the 10 days we spent together, we celebrated my birthday (very happy to report no ceiling crashing in this year), cheered a Seahawks win…and mourned a Seahawks loss (though secretly Janice celebrated a Panther’s win, but she wasn’t allowed to show it), ate great food, walked a million miles around town (sometimes in the pouring rain, sometimes in the freezing cold), went to Fashion Week, stepped into oodles of adorable little shops and just had fun being together! Ask me about Amsterdam and I’m going to say it’s a great place for friends!! 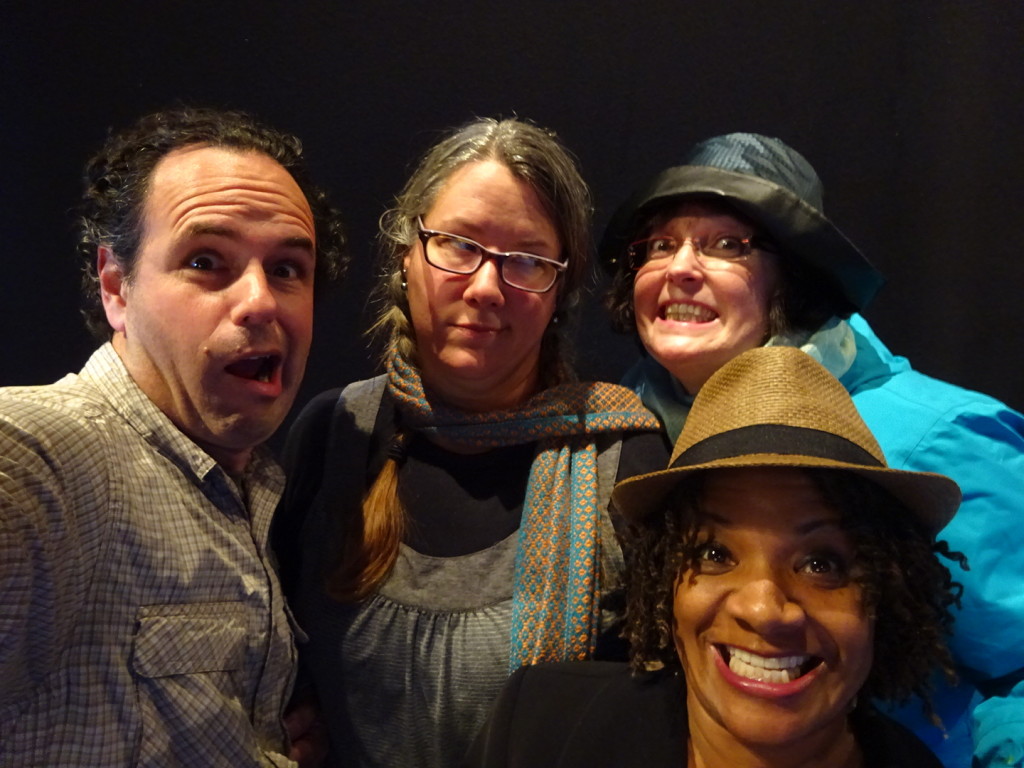 And just like that it was time to go home. A fun, once in a life time experience now in the books.

« Back to the Starting Line: Seattle
Tools make the artist… »