When we started this trip we certainly had no plans to go to Sweden, but once that’s the way our travels led, I started getting pretty excited. Unfortunately, Sweden, you had one big disappointment in store for me. You see, I was led to believe that everyone in Sweden looked just like a Viking. I was expecting a country filled with tall, studly, blond Thors…but, no. Take it from us so you’re not disappointed: Swedes look like normal people. Very normal, freezing people with little puffs of steam surrounding them as they attempt to breathe. 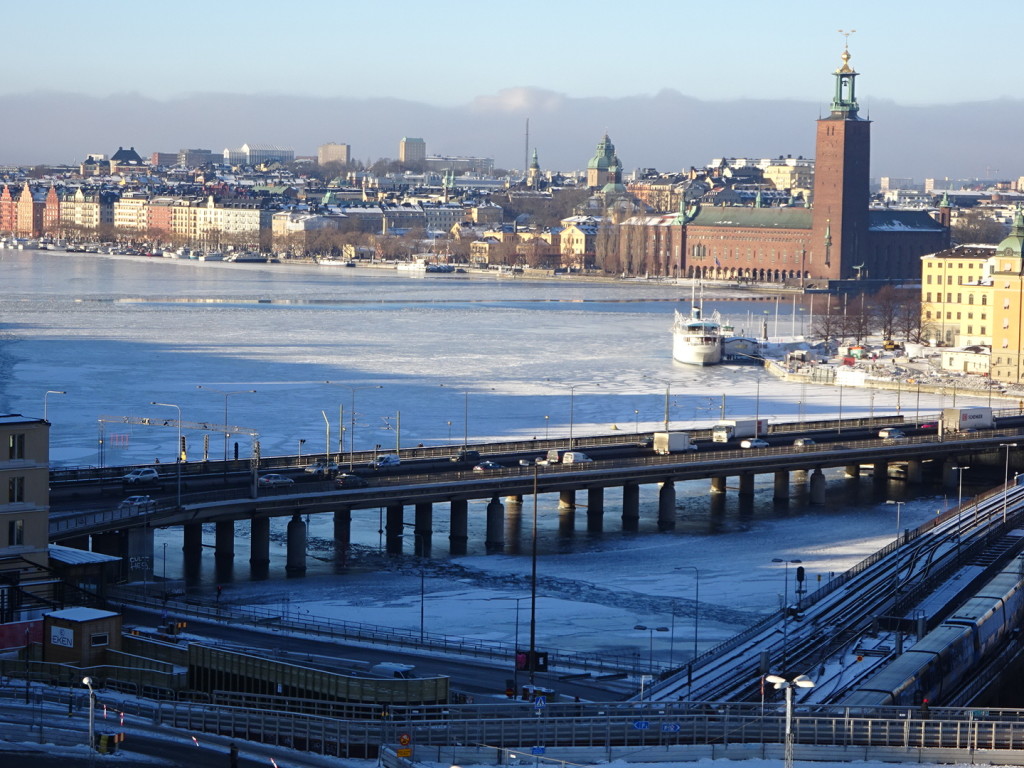 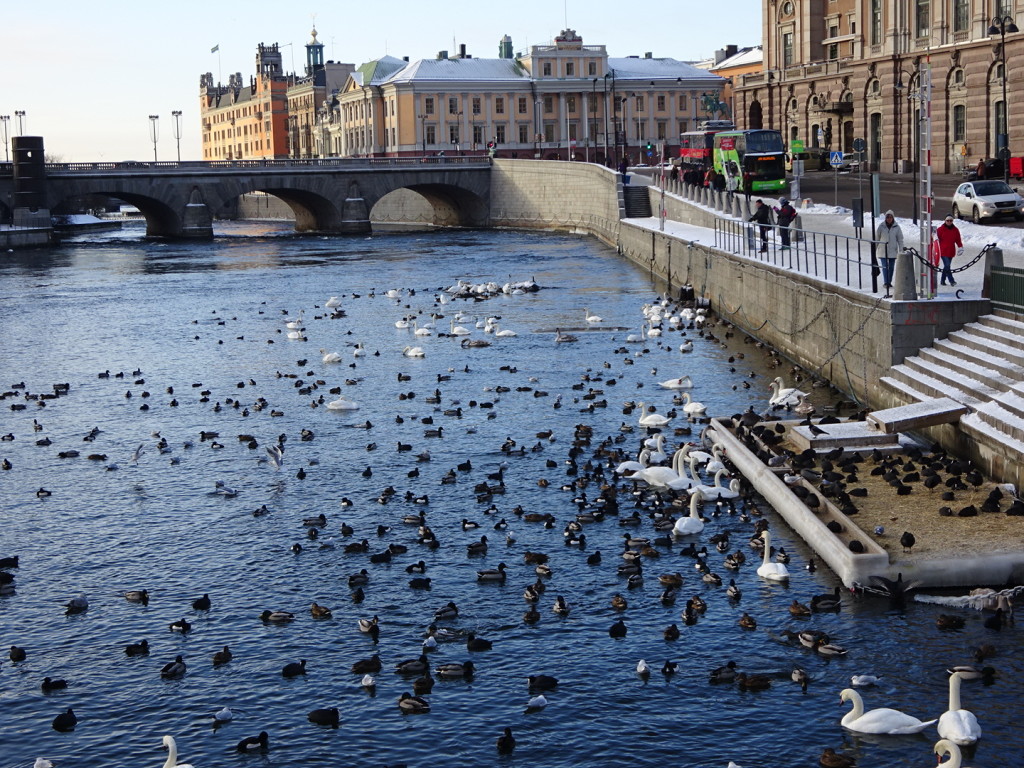 Even the ducks and geese thought it was cold.

Sweden in January in one word? COLD! In two words: FREAKIN’ COLD! Safe to say that Sweden will be, by far, our coldest stop of the trip. Daily temps were in the teens. Brrrrr. My Minnesota family was suffering in 20 below so I know we’ll get no sympathy for our above zero adventure, but MAN was it cold! Just remember we aren’t backpacking with snowsuits and foot warmers. We did the only thing we could do: we layered in every single piece of clothing we own and waddled around in the frigid air. Despite that, we **loved** this land — even if there were very few Thor-like viking types. 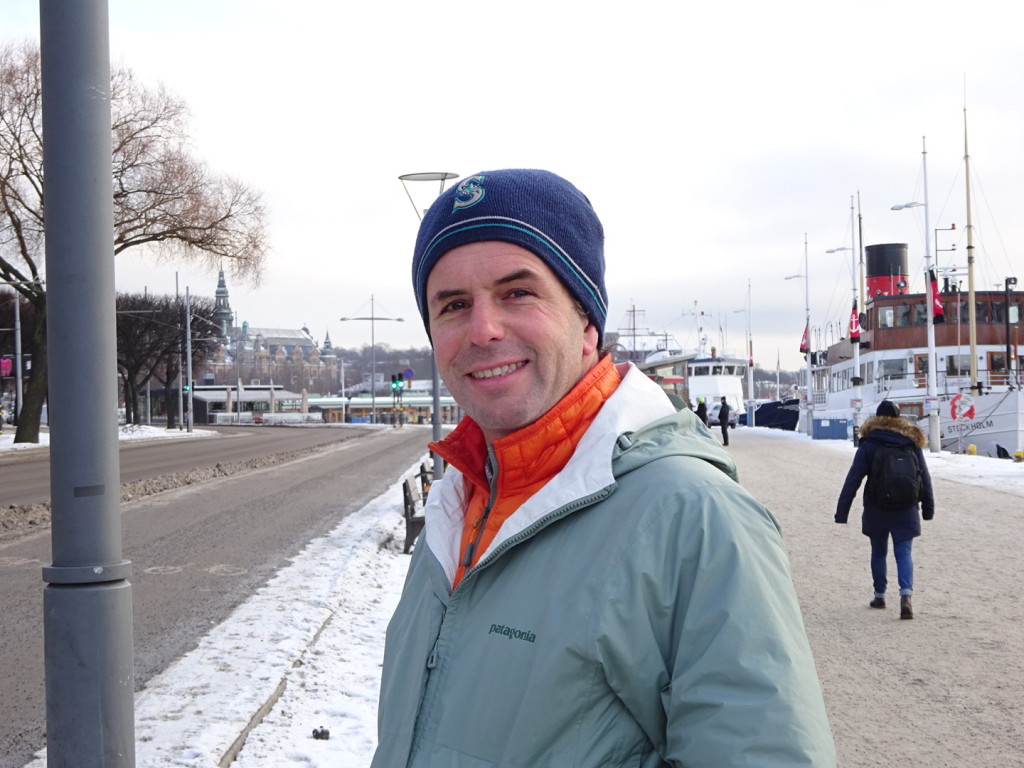 Well…there was this guy. He’ll do.

It being deep into the off season in Stockholm, one shop owner after another welcomed us into their toasty stores and stood stunned to see Americans – who, for some unknown reason visit Florida or Hawaii in January, not Sweden. Odd, that. For us, it meant everyone was happy to chat and lines were non-exisistent! In the Stockholm old-town area of Gamla Stan, where we stayed, there were oodles of buildings from the 16 and 1700’s, icy, cobbled streets to roam and stores filled with art and loads of really nice handmade things…mostly of wool. It was a nice area to be based in. 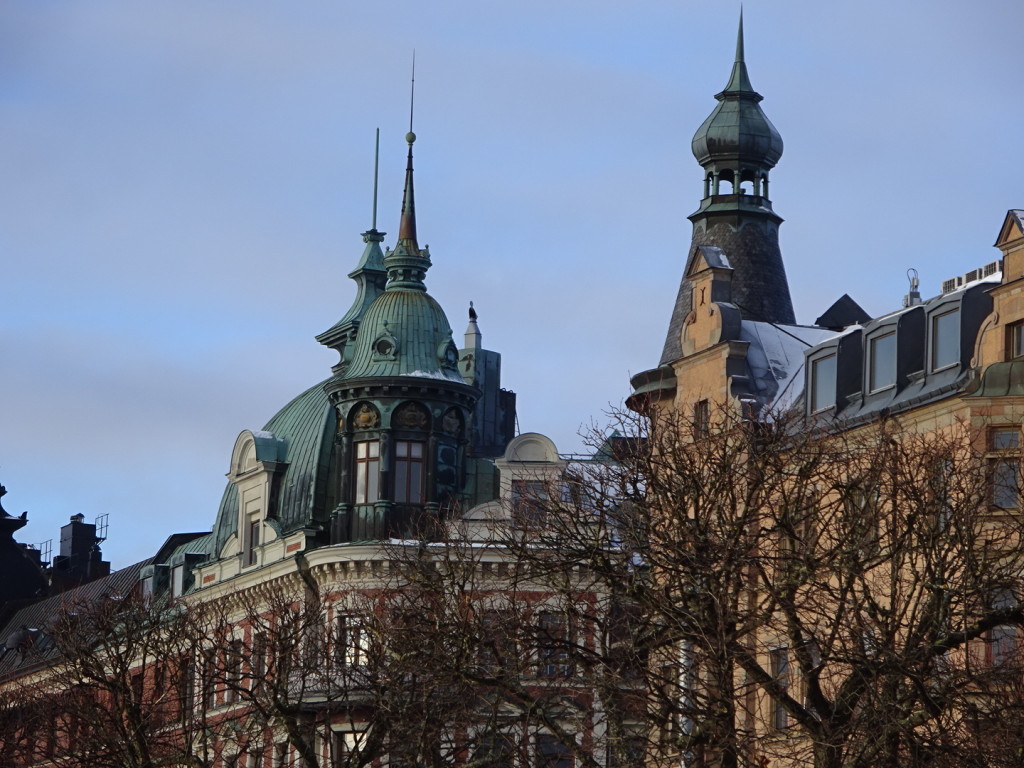 Fantastic architecture was everywhere in our area of Gamla Stan. Love all the spires and bubbles on everything.

Back when we announced our stop in Sweden, everyone (EVERYONE!) said, “You gotta go to the Vasa.” We had no idea what that meant, but when everyone says to do something, we’ll give it a go! The sun was shining on Vasa day, so we bundled up and took an oh-so-brisk 40 minute walk along the water…

Love me a bridge…even a frosty one. 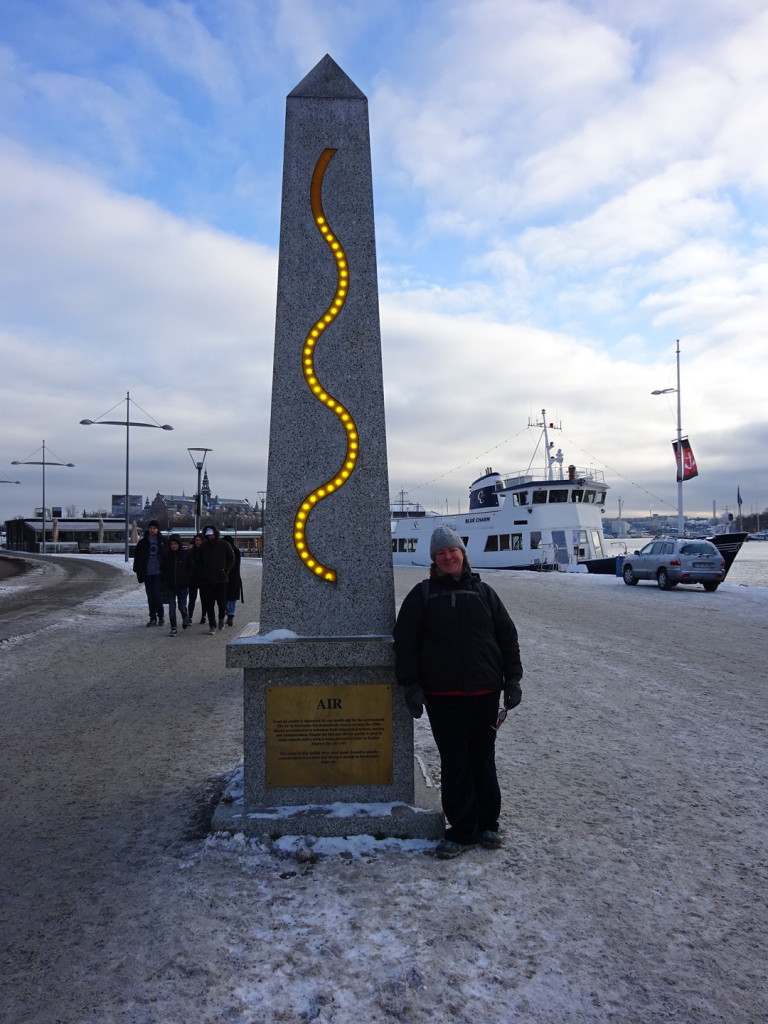 A series of sculptures from the 1990’s that use real time data to tell the air and water quality in a light-up form – very cool and so ahead of its time compared to home.

What we came upon was this giant building along the waterfront (one of MANY waterfronts throughout Stockholm). Not quite sure what to expect, we headed inside the Vasa Museum and this is what we found: 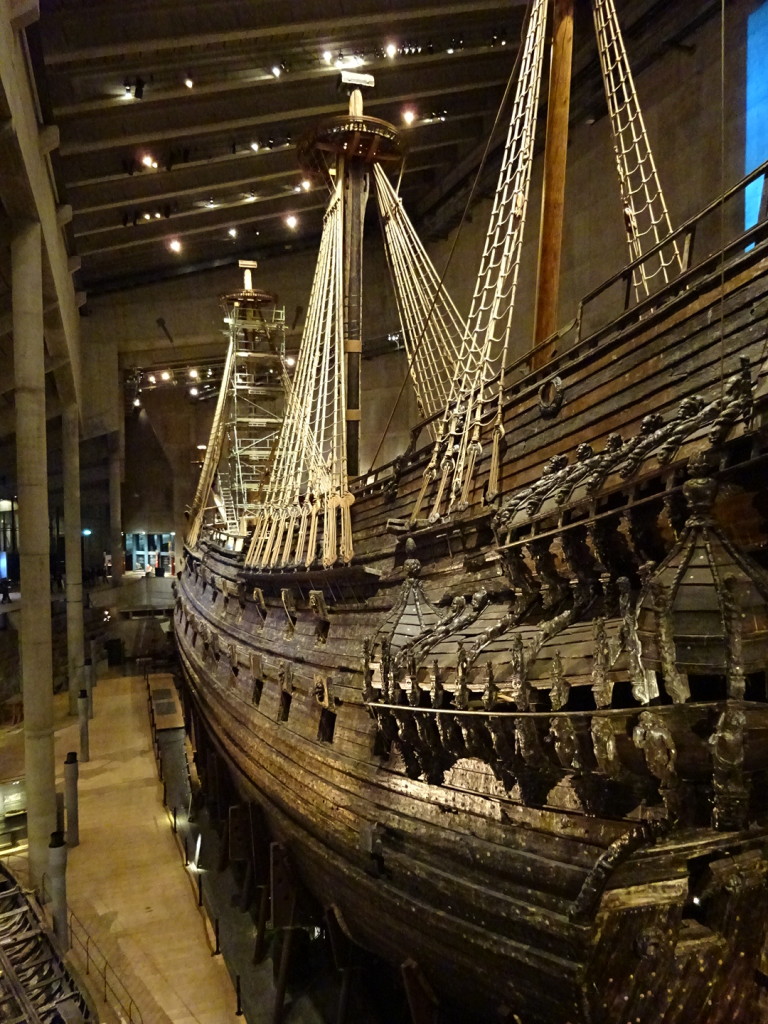 The Vasa under preservation. Nearly 98% of it is original.

Unbelievable! A fully preserved 1600’s wooden sailing ship sitting in the building! It was crazy. What’s the story, you wonder? Well, file this one under Engineering Marvels: in 1628 the Swedes launched a war ship four years in the building. Unfortunately a small squall came up on it’s maiden voyage and the Vasa sank about 1000 meters out into the harbor. Apparently it was too narrow on the bottom and didn’t have enough ballast to keep it from tipping over! That’s NOT the engineering marvel…what is amazing is that it sat on the bottom for 300+ years until engineers in the 1950’s and 60’s figured out how to raise it up using — my favorite — pontoons! Since then it’s been an incredible story of re-creation and preservation unheard of with wooden ships of this type.

Scale model of the Vasa. It sat right next to the real one so you could really imagine what it looked like when freshly painted back in the 1600’s.

Like a giant puzzle, engineers and scientists put the Vasa together again (there were a LOT of pieces spread around the ocean floor) after raising it from the sea bed and worked diligently on preserving it (actually, they continue that work today). Then the Swedes built a museum around it. Today you can walk right up and have a good look! The sense of size when you stand right next to that giant ship is pretty awe-inducing…though I wouldn’t want to be fitting 450 crew members on it as they planned! Tight quarters indeed.

The Vasa has become one big science project on how to preserve a wooden ship, especially one of this size and age, discovering the original paint colors, and understanding all the bits and pieces. That’s the engineering marvel! One of the fun elements of the museum is that some items they don’t know much about are on display with a sign asking the public, “What do you think it is?” How great will it be when they crowd source the answers! 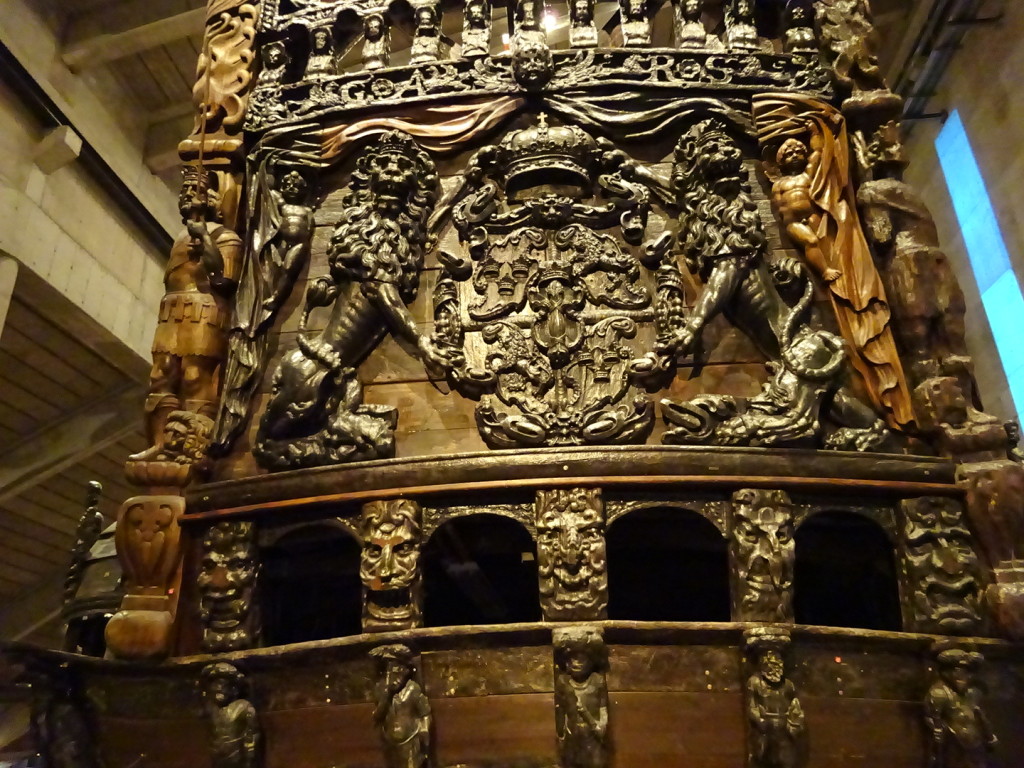 The original back of the vessel. The entire ship was covered in carvings! 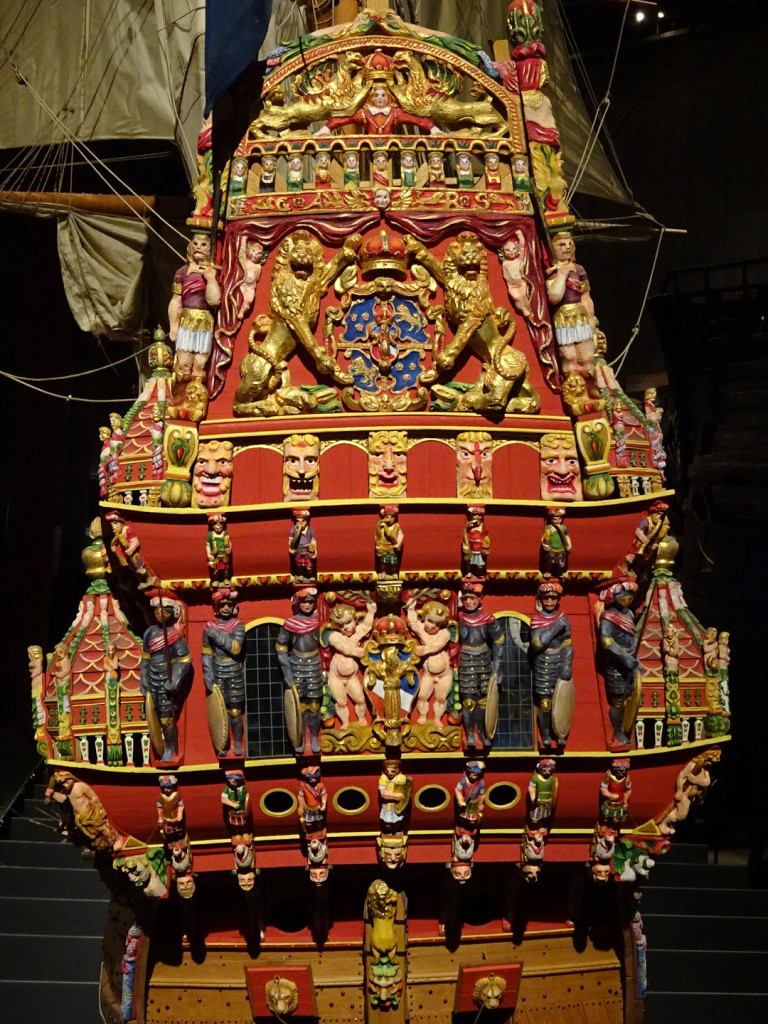 A model of how scientists think it was painted. The places that aren’t painted are spots where they couldn’t find any flecks on the original Vasa to analyze and compare. 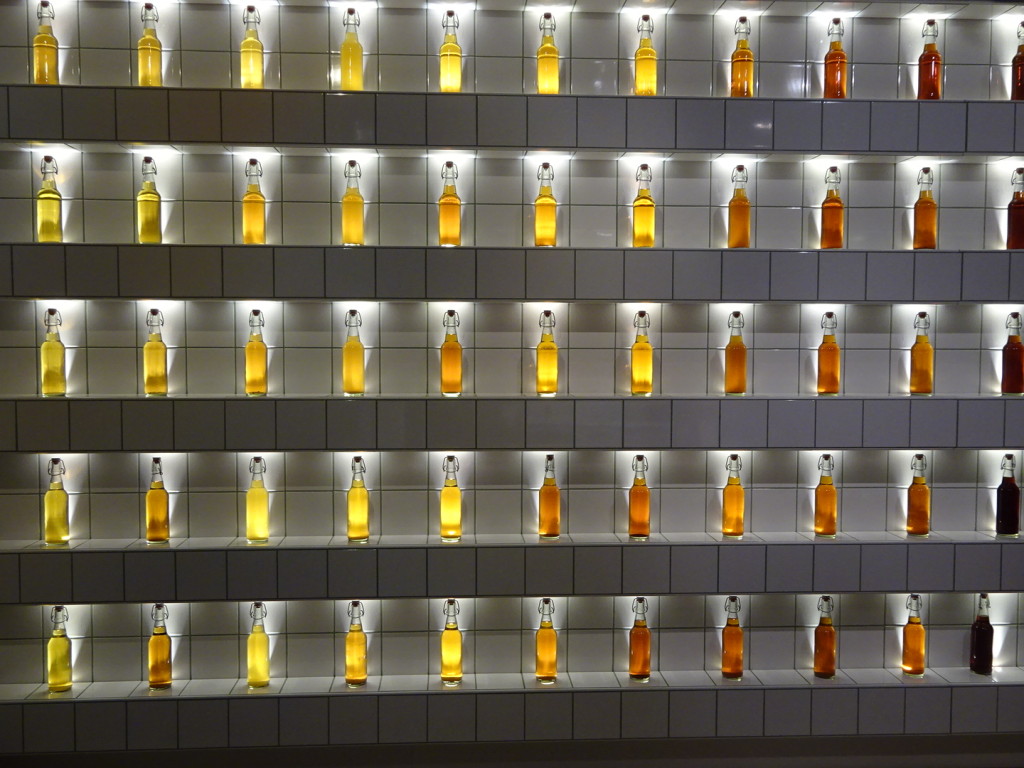 Ahhh, the wall of beers. Actually made quite a pretty display, though neither Aaron or I has much interest in the different beers around the world.

Remember the magazine ads from the 1990’s with Absolut bottles painted in crazy ways? Apparently they commissioned artists of all types to do over 800 of them during the ’90’s and early 2000’s! We can report that exactly five were on display (only three of which were owned by Absolut) as part of an exhibit celebrating the work of Keith Haring. We were so confused to see only a handful that we asked an employee if we missed a room or a floor or another building, but no. I guess, like drinking, they figure three is more than enough. Sad. 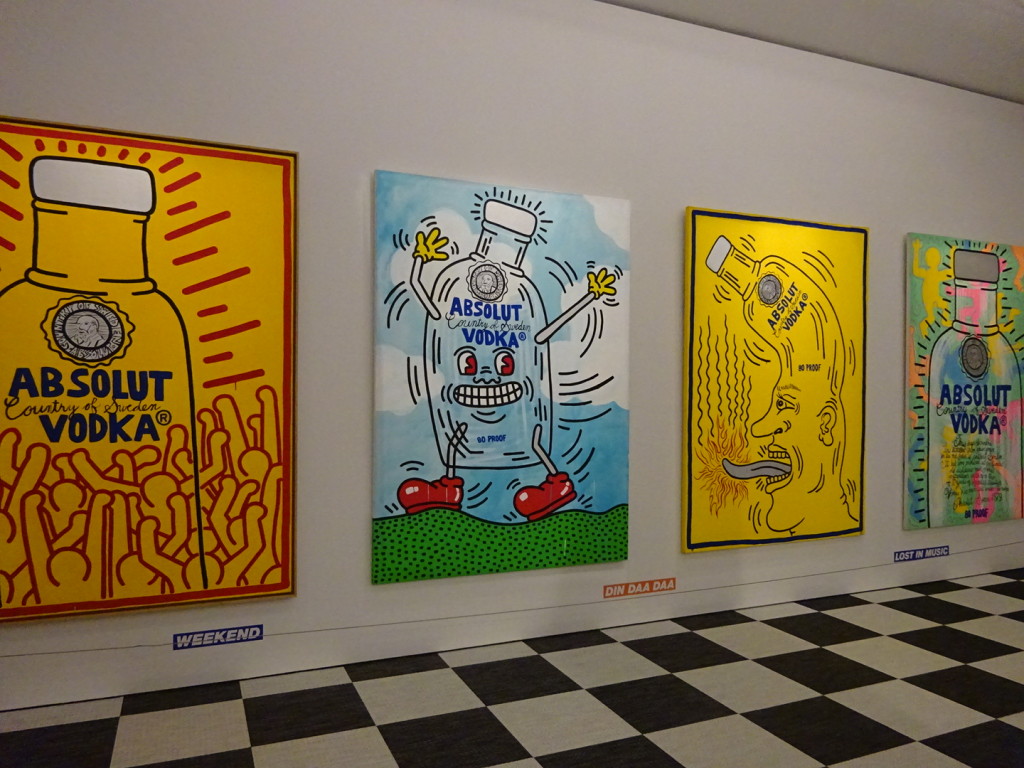 That’s all you get. Two of these Keith Harings were on loan from another museum. 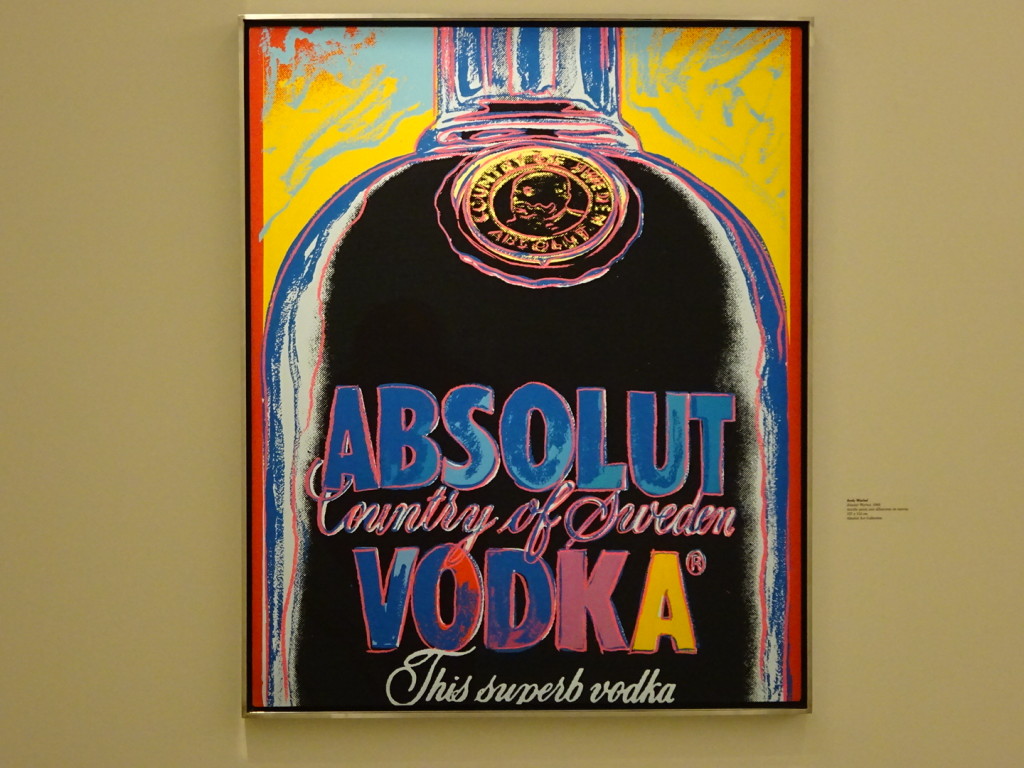 The fifth painting, by Haring’s mentor…a rather unknown artist by the name of Andy Warhol. Had no idea he was still working then!

This could have been a really amazing stop with a display of all those wonderful paintings, but instead the best thing about it was lunch. Yep, the museum cafe was super luxe and we had delicious seafood with the fanciest tea service of our entire trip. 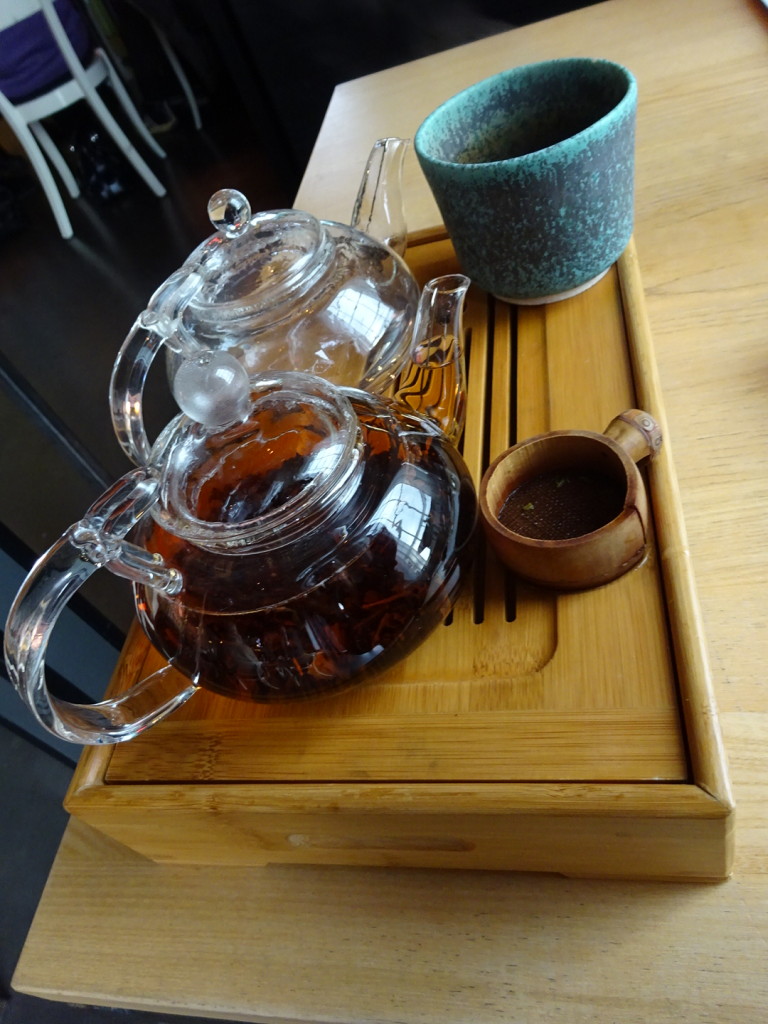 It took some work to get two cups of tea, but I’ve gotta say it was hot and tasty!

On our second day we braced ourselves against the cold wind to watch the changing of the gaurd at the Royal Palace. You never hear about it, but Sweden has one of the oldest monarchies in Europe; a concept I can’t wrap my head around, but I like a little pomp so us, a dozen other tourists, and a class of frosty-cheeked pre-schoolers all watched the gaurd…change. 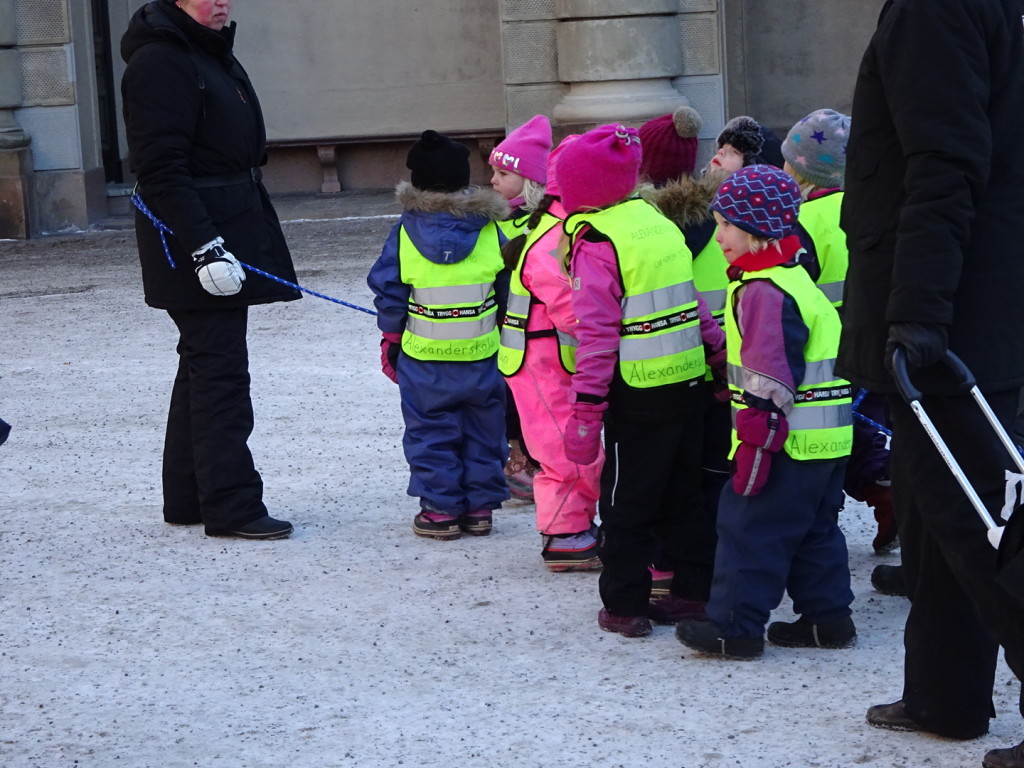 These chilly youngsters were super patient and well behaved, but the second they saw their teacher was ready to go, so were they. It was cold! 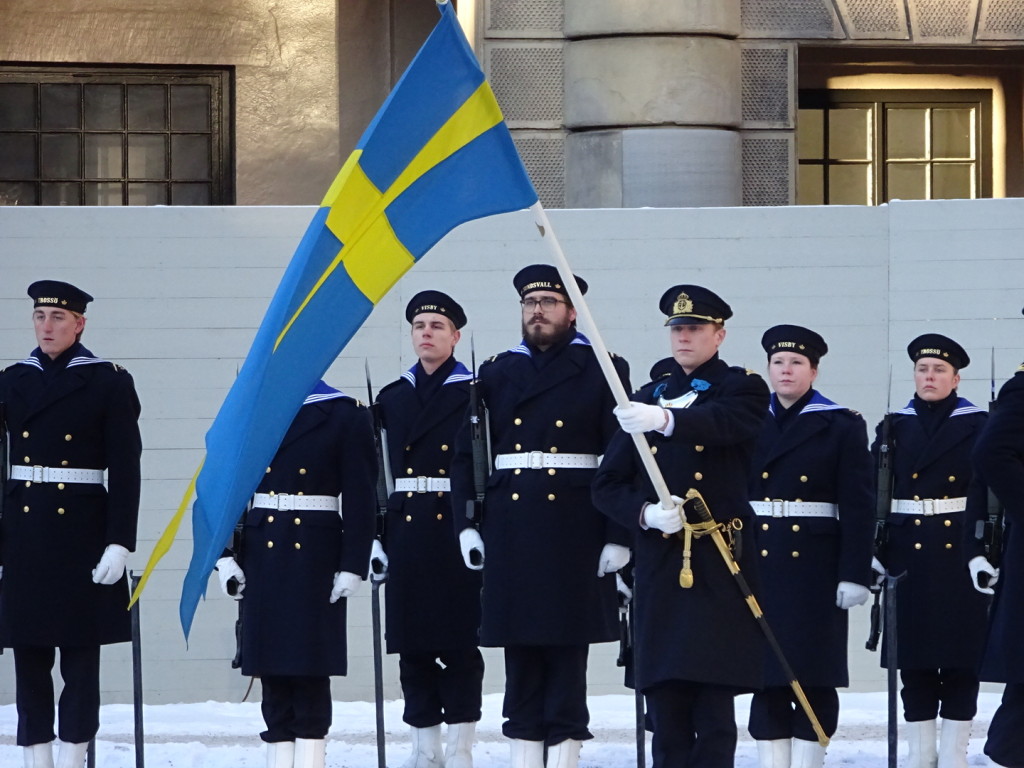 Standing at attention while the gaurds were changed. 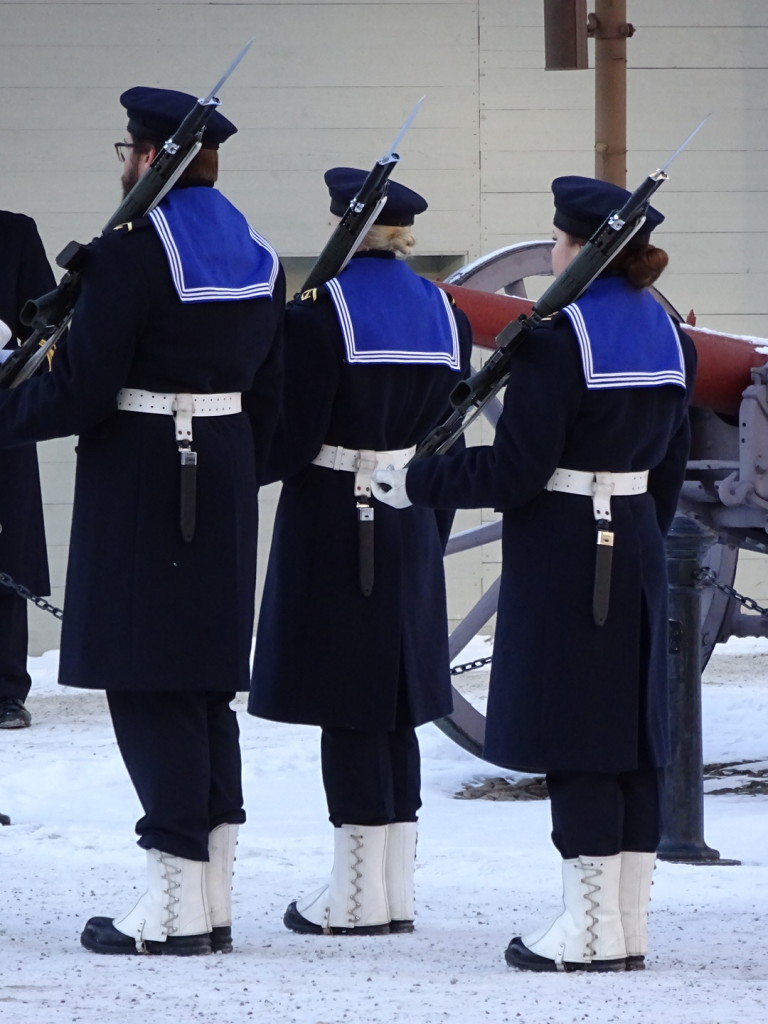 Some of the guards headed to relieve one of the five posts around the palace. 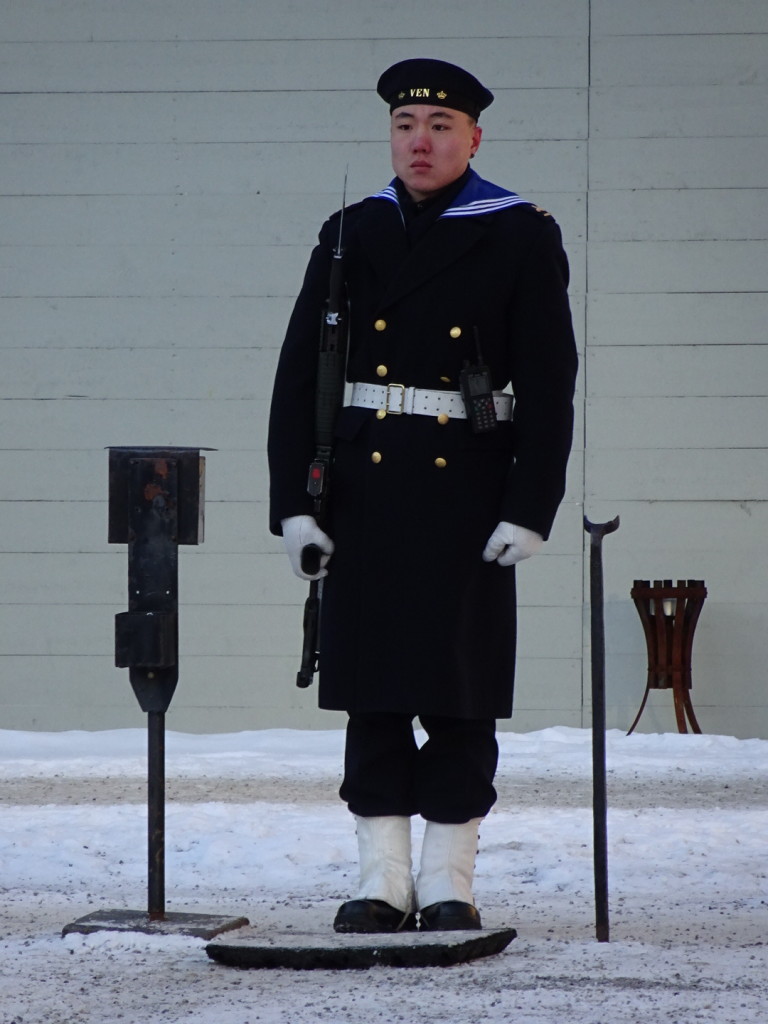 After an hour in the cold, I think this gaurd was probably VERY pleased to be relieved!

Very nearby we visited the Royal Armory, a museum full of garments, guns, armor, flags, carriages and a few snow sleighs kept by the ruling family. Weird to walk around and think all this stuff belongs to the folks who live in the palace above our heads… It made me wonder what we would find out if we could trace our families back to the 1600’s. Surprisingly interesting to see how big the male garments were (there must have been some tubby kings) compared with the tiny women’s shoes. People simply must have had smaller feet back in the day.

Quick tip: if you are around on a Thursday after 5:00pm, the Armory is free! Sweden is VERY expensive, so we were quite pleased to take advantage.

One of the many carriages on display in the basement level. There were about 15 or so, along with some sleighs. 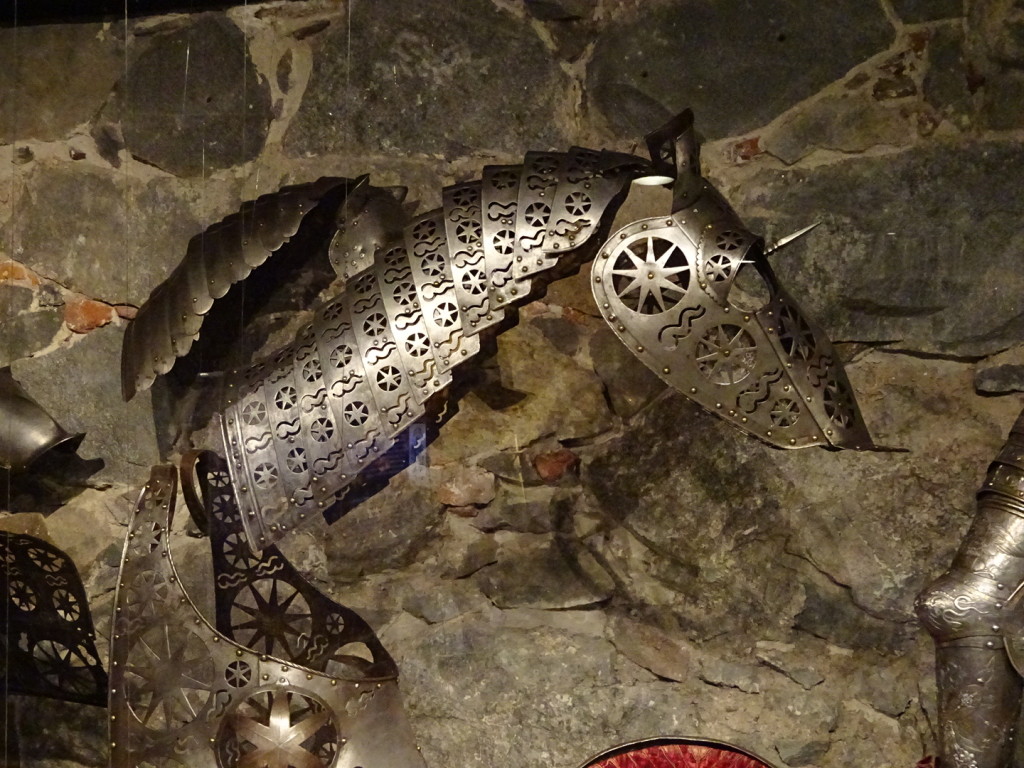 Lots of ornate armor in the collection as some of these were war kings! Most things were ceremonial, though, or used for jousts in honor of weddings rather than actual war. Here was a horse’s helm. 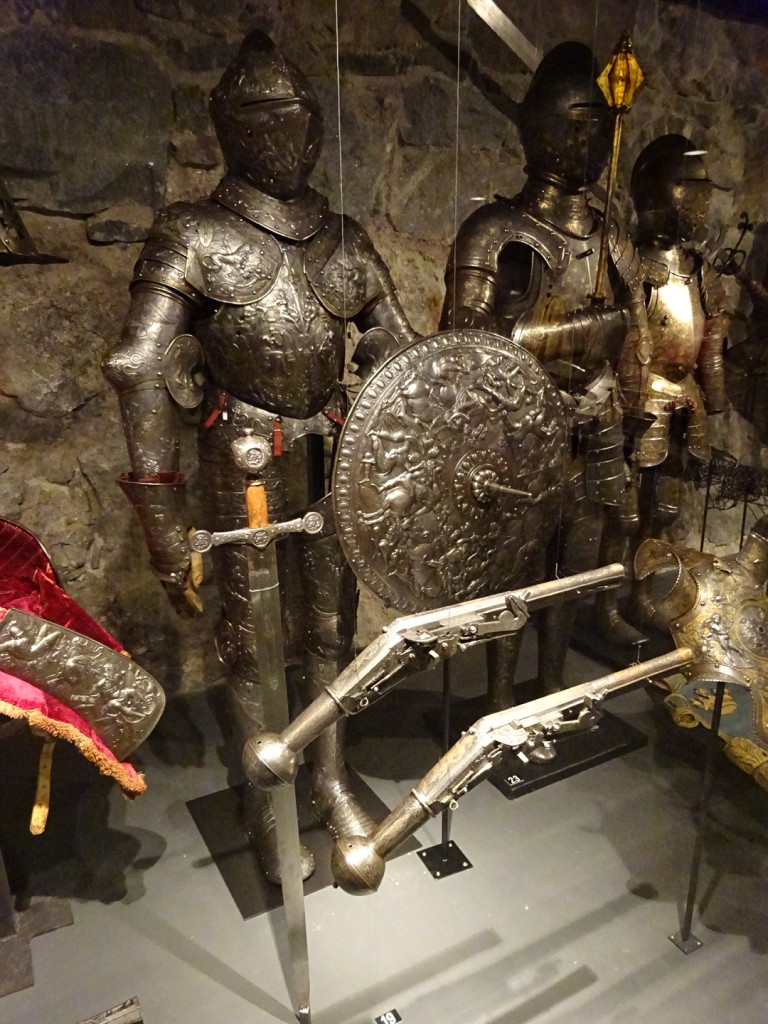 The metal-work was SPECTACULAR! Chased designs, engraving…really impressive. Hard to photograph behind the glass and with so many pieces in view in every shot, but Aaron tried. 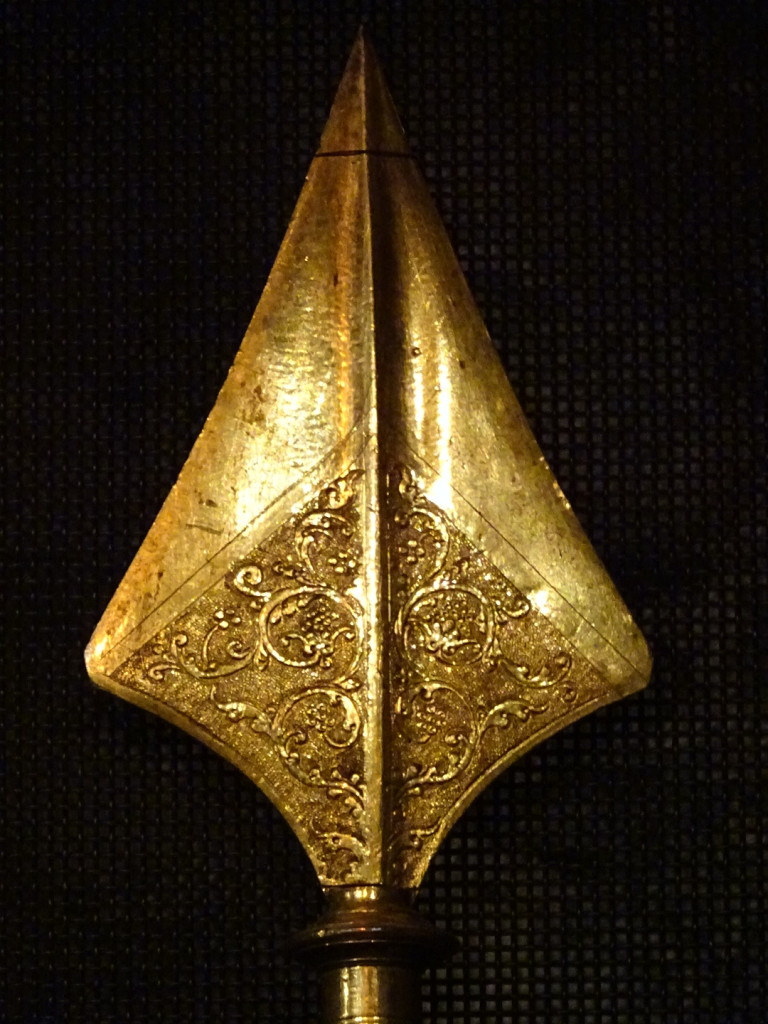 Beautiful work on a halberd tip. 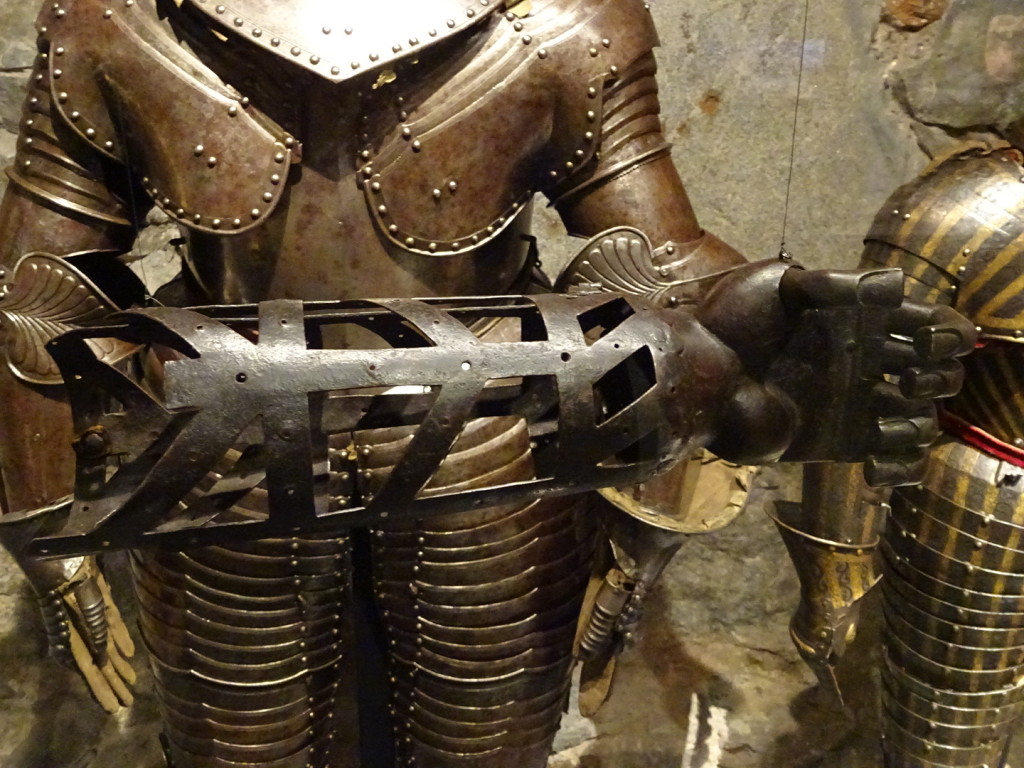 An early version of a mechanical prosthetic hand.

Some really big doin’s for us happened on day three when we stumbled across a Japanese origami hat maker! That’s a story we want to tell you in full detail, so stay tuned for all the fuzzy folding-and-sewing details coming out in the next bit. 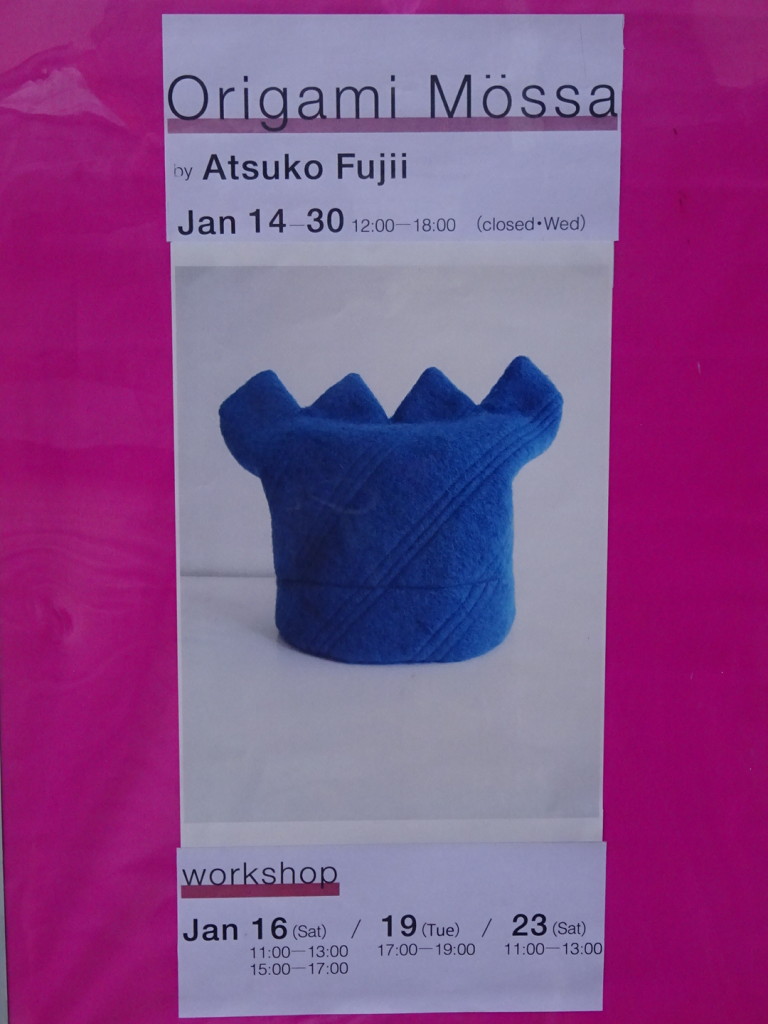 Overall we had a wonderful time in freezing cold Stockholm. It was friendly, beautiful, and jam-packed full of galleries and museums. We hear it also has lots of outdoor activities…should you arrive in slightly more temperate conditions. Maybe next visit…

How about a final photo or six? 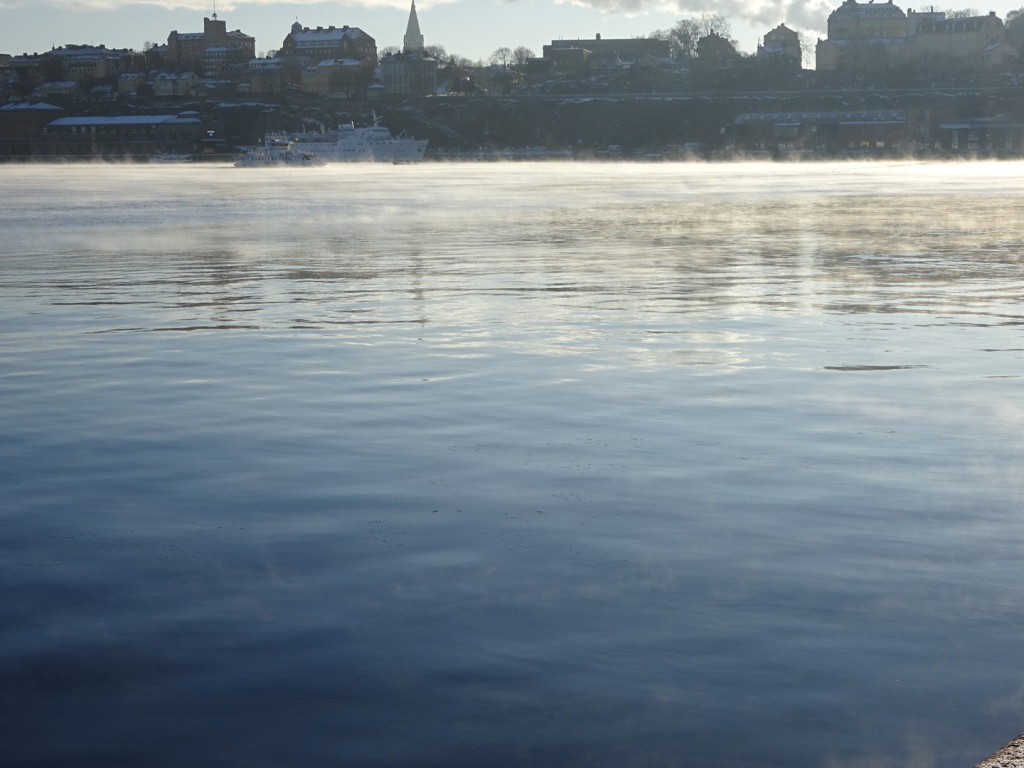 Mists rose over the water as we headed out walking one day. 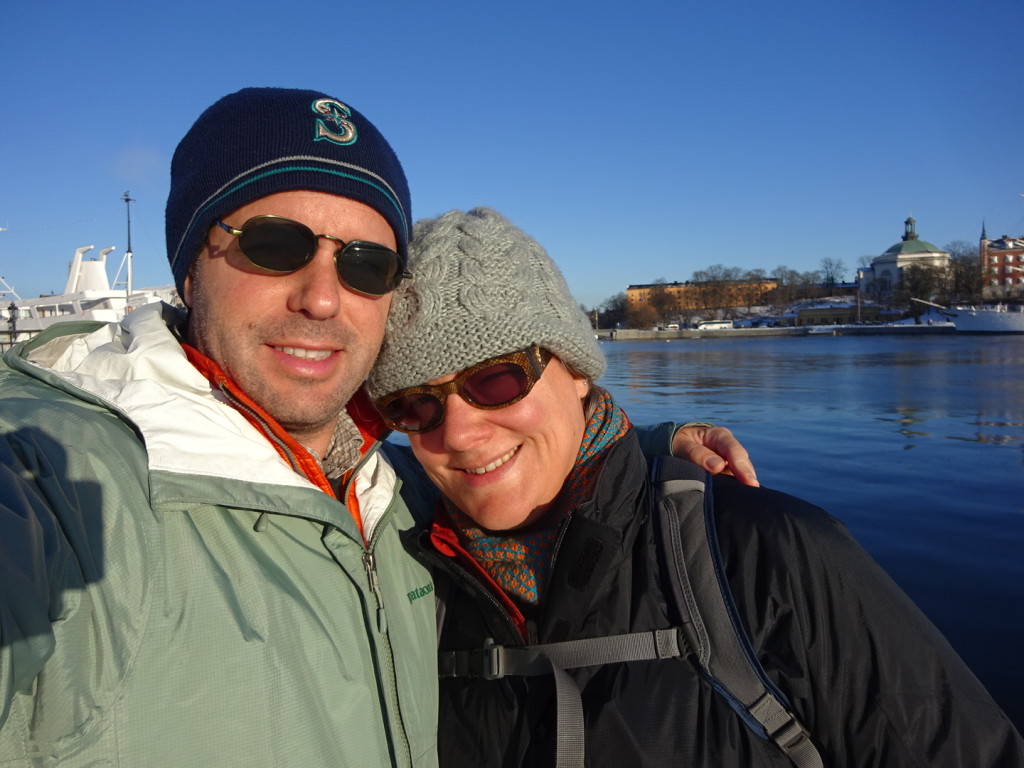 A couple of happy Stockholm visitors dressed in a mere 5 layers each. Trying to stay toasty! 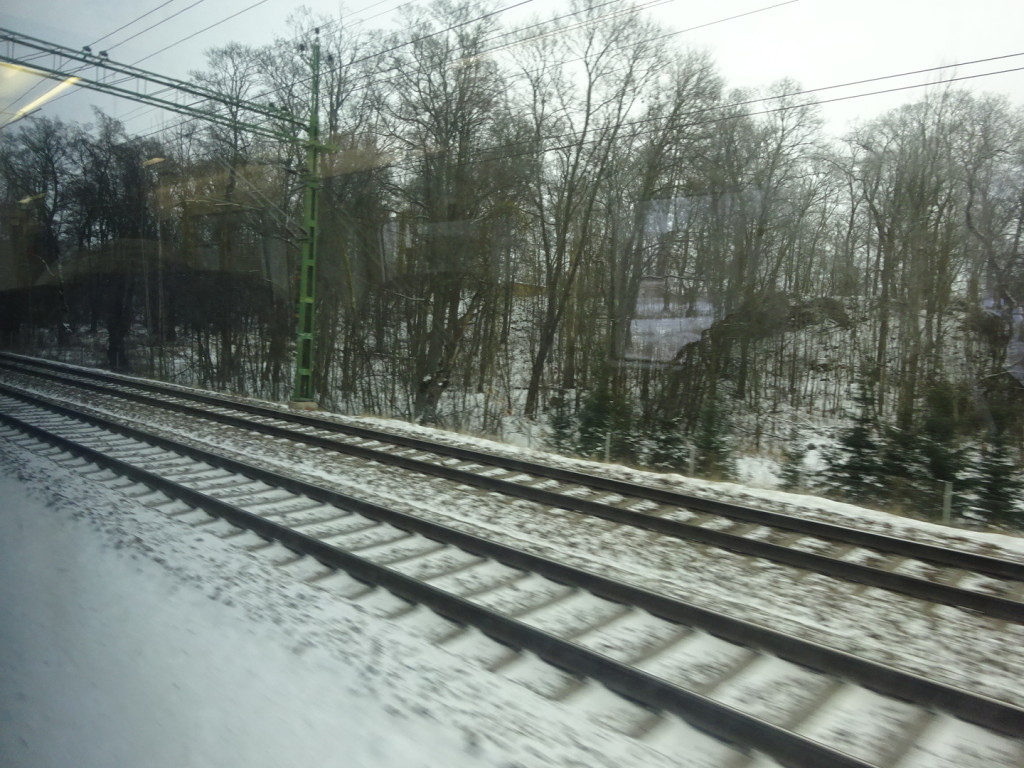 Did we mention it was cold out there? 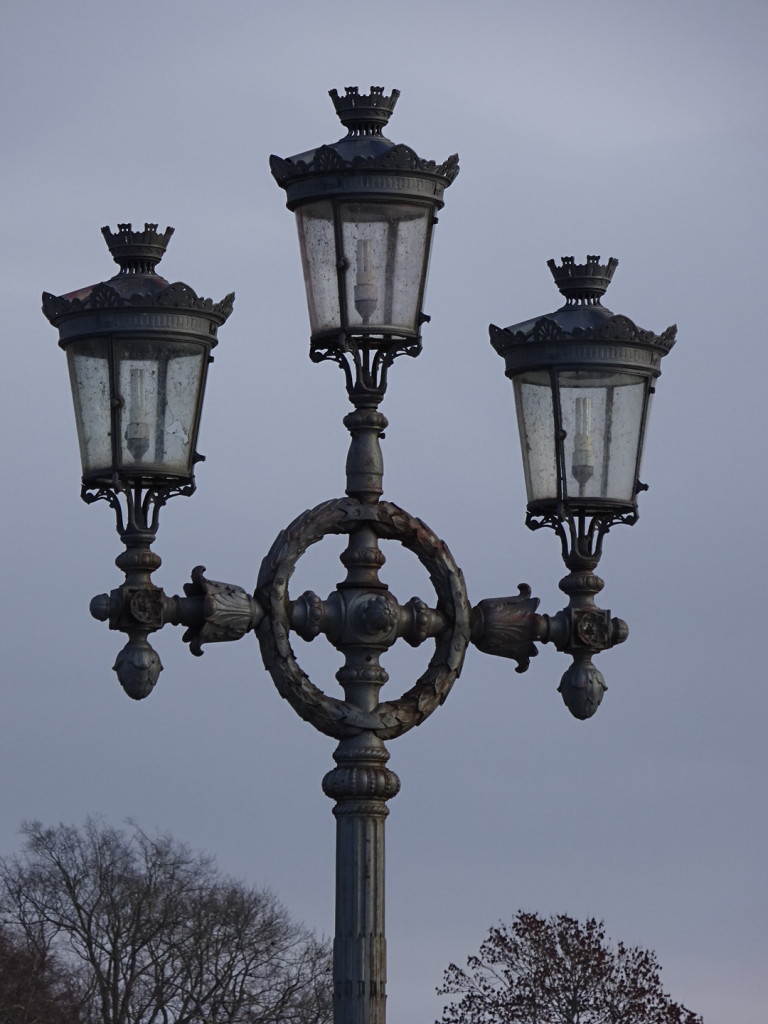 And, finally, everyone loves a food picture… 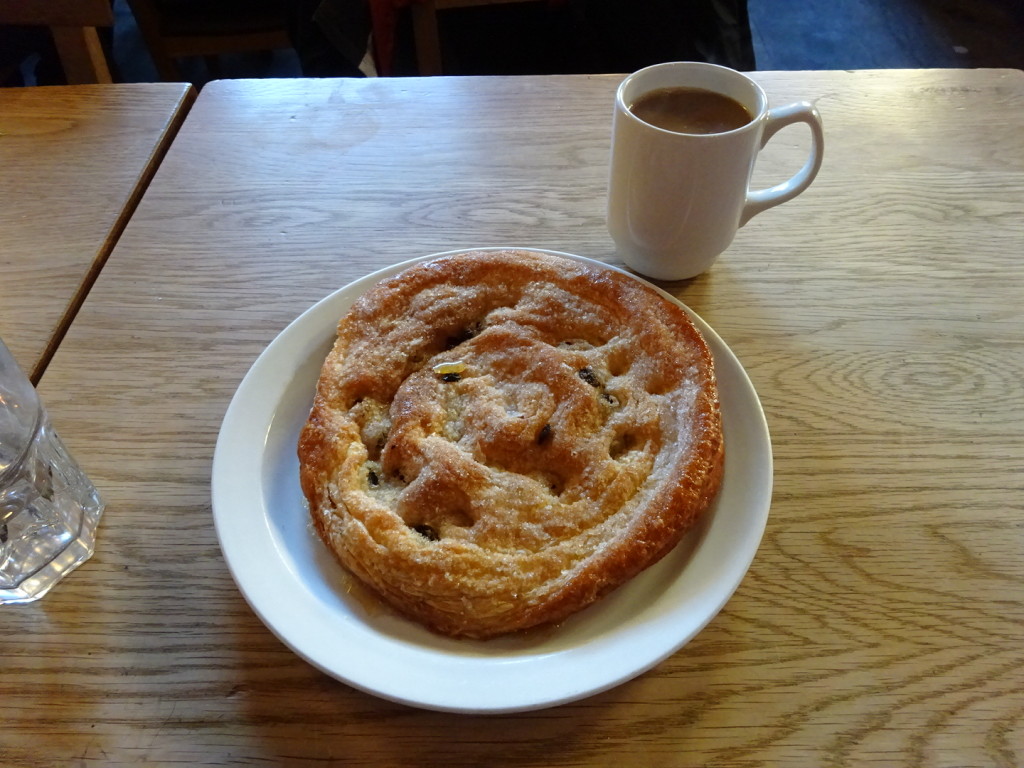 Swedes call this a “smorlock” and trust me when I say you want one. Basically it’s a pie crust with sugar and raisins that comes in the size of a dinner plate. Crispy, flaky, and deliciously sweet. Yes, please!

« What it Cost: Iceland
Ever Made A Hat In Stockholm? Why, Yes. Yes I Have. »

Leave a Reply to Casey Gluckman