Having said our sad goodbyes to Goodluck and the other guides, Fun Bus boarded a pair of small prop planes which zipped us to southern Tanzania to visit Ruaha National Park. I do believe Ruaha was not less than 4,000 degrees out. I prefer to say we visited Ruahaaaa-ot! No fan and certainly no AC in sight– it was beautiful, but if you go — be prepared.

At the airport a new set of guides whisked us away to Ruaha River Lodge where we met our most delightful lodge hostess, Stephanie from Germany. She’d only been on the job a month!

Staff and guides took great care of us.

This is our new guide, Majuto (Major, in English).

Majuto welcomed us to our part of the park (our lodge is one of 7 in the park! It’s big.) and gave us the lay of the land on a short evening game drive.

Unlike the northern parks, from what I understand, Ruaha NP is broken up into sections and each lodge has guides that take tourists around that designated area. So, on the one hand, you are limited on where you go, but on the other hand, it feels like you are really the only people in the entire park.

Here’s where we stayed. Note: as many of these “rocks” are hippos as not!

See the woven frond-capped bungalows? Those were home to us all. We stayed in #20.

This might have been the view from our veranda or anywhere along the river. Hippos were everywhere!

Because there are hippos, lions and other critters wandering freely, we were accompanied by the Maasai or a park ranger wherever we went. Hipppos are super dangerous and can run 35 mph on land and chomp you up in one bite. Yikes! I stuck close to the guy with the spear…who doubled as a hotel porter.

Yes, he’s carrying Aaron’s pack on his head with a spear in his hand.

Our new friends Dan and Judy were wonderful company on the safari. Both had accomplished military careers and Dan had another full career as a middle school social studies teacher, so it came as no surprise that each night he made us line up in order of our cabana numbers so when the Maasai guide took us back to our rooms we were dropped off in order. Dan’s got skillz. 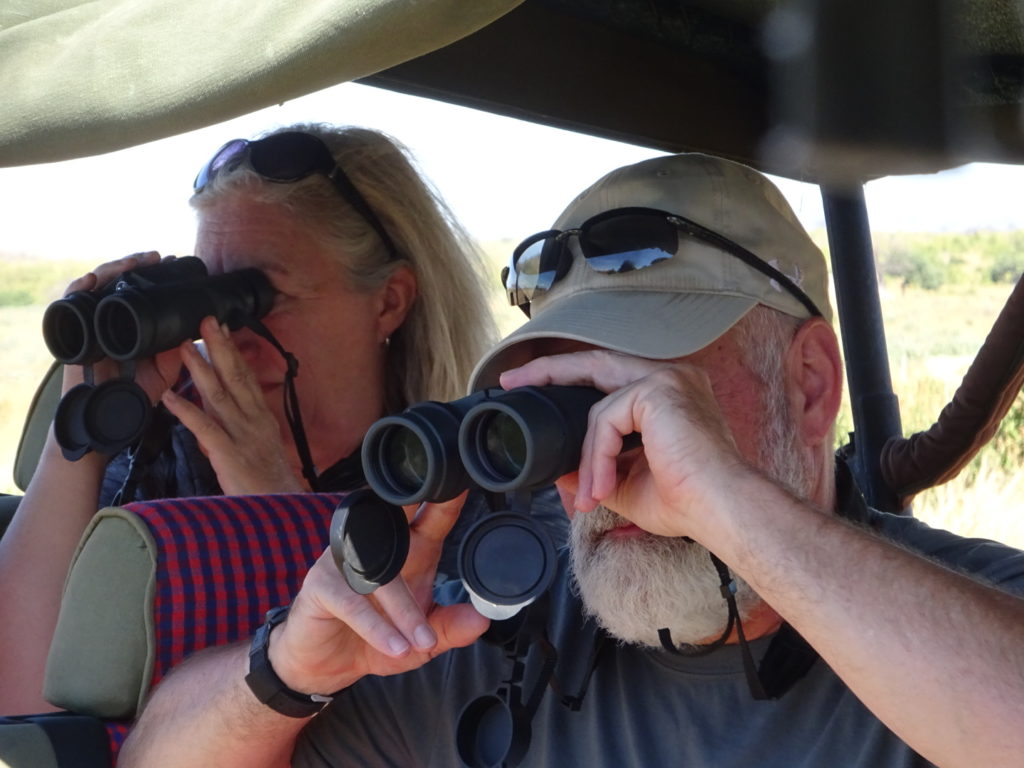 Dan and Judy are on the lookout, making sure we’re in formation!

Our cabanas were as big as our actual house back in Seattle.

This gives you an idea about the room. When you look at it, imagine it feeling like 1,000 degrees with no fan — just to get the full picture.

Even the bathroom was ginormous – just take a look at that shower! And this is only half of it – there were a pair of sinks and a toilet on the other side.

But enough of this HGTV business, we’re all here to see the safari in action! Twendene – Swahili for “Let’s go!” 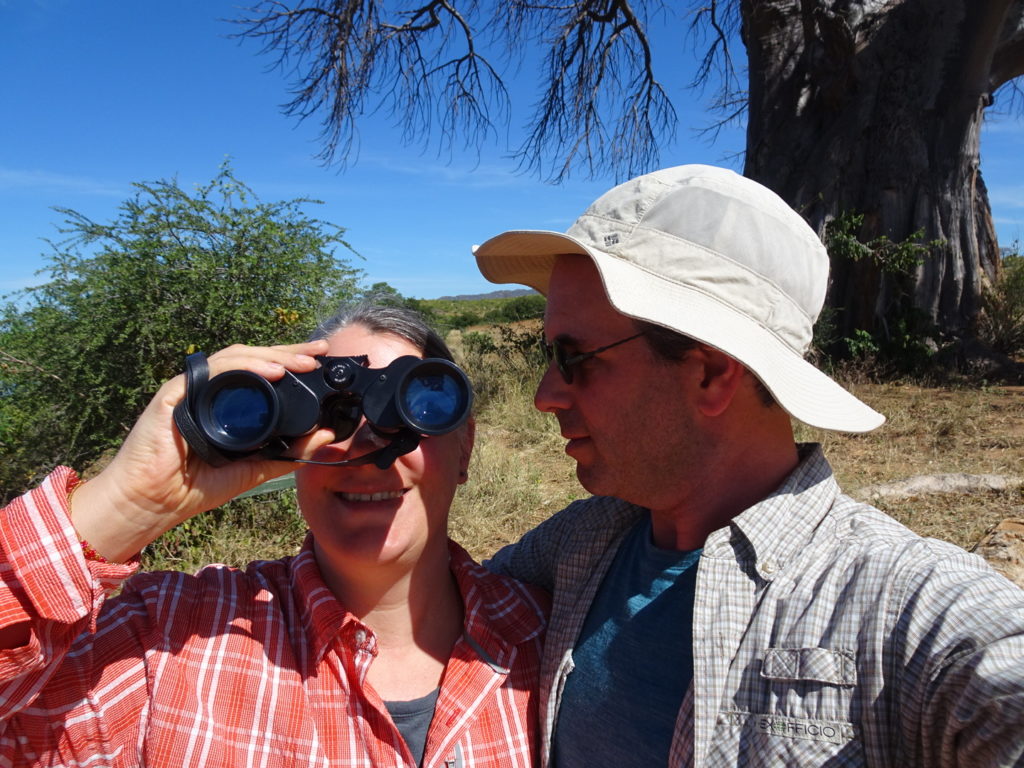 Ruaha is known for its baobab trees. They are super slow growing (can you say 4 inches in 20 years?) and live forever. Like HUNDREDS of years. So think about that — these trees were probably seedlings loooong before America was discovered. Only way to know for sure is to carbon date them.

These are some of the smaller baobabs we saw. Many had trunks of at least 15-20ft in circumference.

Having seen approximately thirty-seven gigazillion impala on our 2015 safari, I sent my downpayment to Brian with a note saying full payment was contingent upon impala sighting. Impala dreams came true once more.

You don’t believe it was actually 37 gigazillion? Oh, how wrong you are!

Impalas aren’t everything, though. We also enjoyed wonderful sightings of giraffes, elephants, and a couple of lions, including one angry fellow who roared at us and scared me and I was super happy when we left him under the bush.

This guy was NOT happy to see us.

A much happier lion!

Much more skittish in Ruaha.

This was a normal lion, just laying under a shrub to avoid the sun.

How about a few birds?

This hornbill is only found in Ruaha.

Check out the colors on this saddle billed stork!

Fishing time. Got one!

Back to some bigger fellows.

If you look closely you’ll see hippos AND a croc. Oh! Forgot to mention, a LOT of crocs in the river too.

One animal we saw exclusively in Ruaha (though they are in other parks) was the kudu. It’s a bigger antelope, kind of approaching caribou size.

Just look at those stripes.

Aaron’s favorite fact of the trip is that researchers realized that kudu developed to live in the deeper brush because the inside of their ears are simply skin, not fur. That meant they wouldn’t catch on branches or snag things. Mother Nature is brilliant once more!

Ruaha had a really horrible poaching problem just a few years back, losing 12,000 elephants in only three years! They’ve started coming back now with China banning the import of ivory. I never thought I’d say it, but thank you, China.

During our first couple days we saw barely any, but suddenly it was Elephant Day. They were everywhere, but particularly dramatic watching them come down to the river to drink. This is one of my favorite photos.

I think this pic is going up in our bathroom. Shower time, everyone.

Like a clown car, these elephants just kept coming and coming. I think there were at least 12 taking shade under this tree.

Don’t believe me? See the two short videos at the end of this post.

We spent four nights at the Ruaha River Lodge taking morning and evening game drives that ended with “sundowners” most nights. That’s when you stop and have a drink, watch the sun aaaaalll moooost set and then race home before dark.

Chilling by the river enjoying sundowners. You wouldn’t know it, but there are hippos galore perhaps 100ft in front of us all!

Brian and Dan teaching one of the Lodge staff about skipping rocks during one of our sundowners.

Suddenly it was time to bid farewell to Ruaha-ot, essentially marking the end of our safari. We all flew to Dar and finished up with a beach day. Aaron and I were a bit stressed about making flight arrangements for Gombe and connecting with our Tanzanian friend David, but like always, it worked out – no problem. Why did I ever worry?

Aaron and Brian tossing the disc around a bit in the surf. The water felt SOOOO goood!

After a day of sand and surf it was time for a big round of sad goodbyes. First up was the safari group who were headed back home to the Midwest, then our Seattle friend Josh left us the next day and the Young Adventurers Club was officially dismantled.

So glad you could join us, Josh! And thanks for carrying home all our souvenirs!!!

Luckily it was only about 3 hours between when Josh left and David sauntered through the gates of the resort, cool as always. We had only communicated by voicemail on WhatsApp, but David made the journey from Tanga to exactly where we were staying. Asked if he had any trouble finding the place he gave a wave of his hand, “No problem, I just looked at the map and then walked here.” The next day, the three of us would head out on our search for the Gombe Stream chimps.

As promised, the Elephant Videos:

A note: We tried very hard to keep all the photos straight but there’s a chance we posted something from the Northern parks in this section. If so, we’ll just say oops and be okay with it.