Akumal – beach and seaweed and street art murals, oh my!

At last we are on the road again! After a LOT of research, we picked Mexico as our first international trip in three years. Aaron has been here quite a few times, but it’s Anner’s first.

Very early in the morning we await our flight to Cancun. Take us away!

Anner said she wanted wall-to-wall snorkeling and drinks on the beach. I don’t think that’s quite how its going to work out, but she is getting a hard-earned vacation.

First stop: the beach town of Akumal, about 90 minutes from the Cancun airport. Anner was disappointed to not find Ted Cruz in the airport, as she has a lot she wanted to share with him. I was glad to start on a more positive note.

Onward to the Playa Blanca condo on the beach. Pretty sure that we both thought it was a 1 bedroom, but turns out its a super cute little studio. And we really mean that. What this condo lacked in square footage, it definitely made up for in pillows – had to be 12 or 15 of them around the room! Super comfy and had everything we needed. Palm trees and a sneak peak at the ocean out our daybed window. Quiet little street out back. Nice place to unwind. 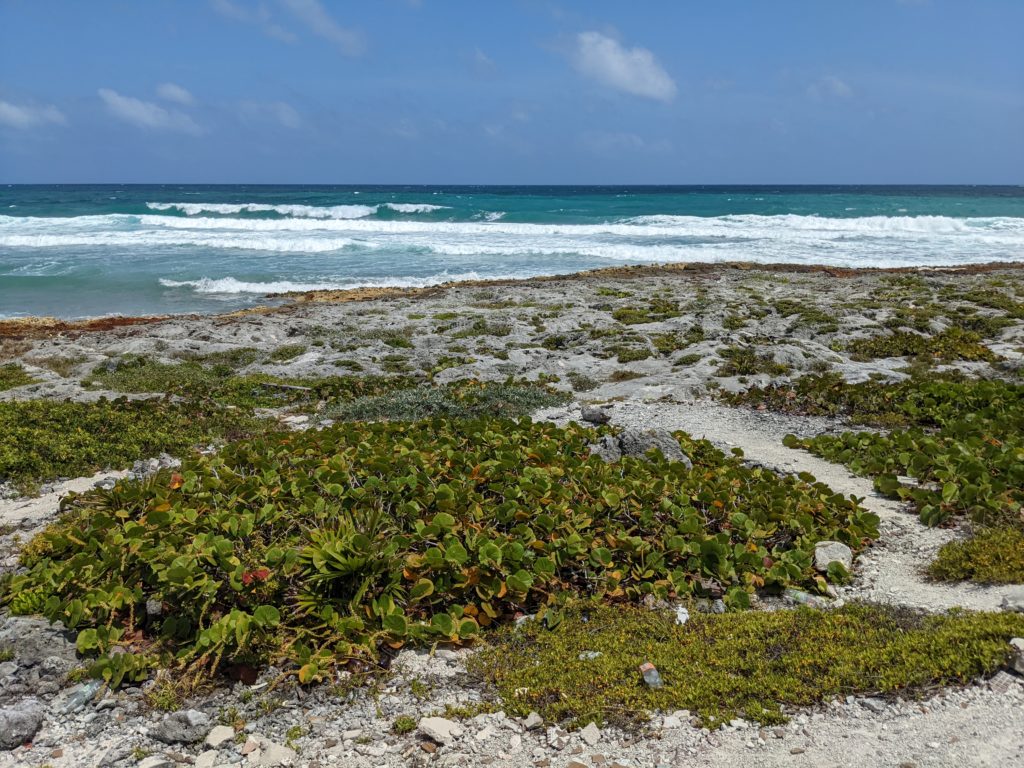 Oh! So apparently it’s sargassum seaweed season here in the Cancun area. It smells really bad. Hard to describe it adequately, though after a few days, you just live with it. The first few days it’s like walking around with a rotten egg in your pocket. Workers clear paths to the ocean by literally shoveling it into wheelbarrows like snow on a sidewalk – yep, there’s that much of it. They haul it out to the road where it rots some more (and probably eventually gets picked up) or pile it in waist-high mounds on the beach. It’s really not great. Obviously this has put a bit of a limit on the snorkeling. I mean, you can go snorkeling, but first you must get past the smelly seaweed. In spite of hauling snorkel equipment all this way, we are not that dedicated. Also, except for our last day, the water was really, REALLY choppy. 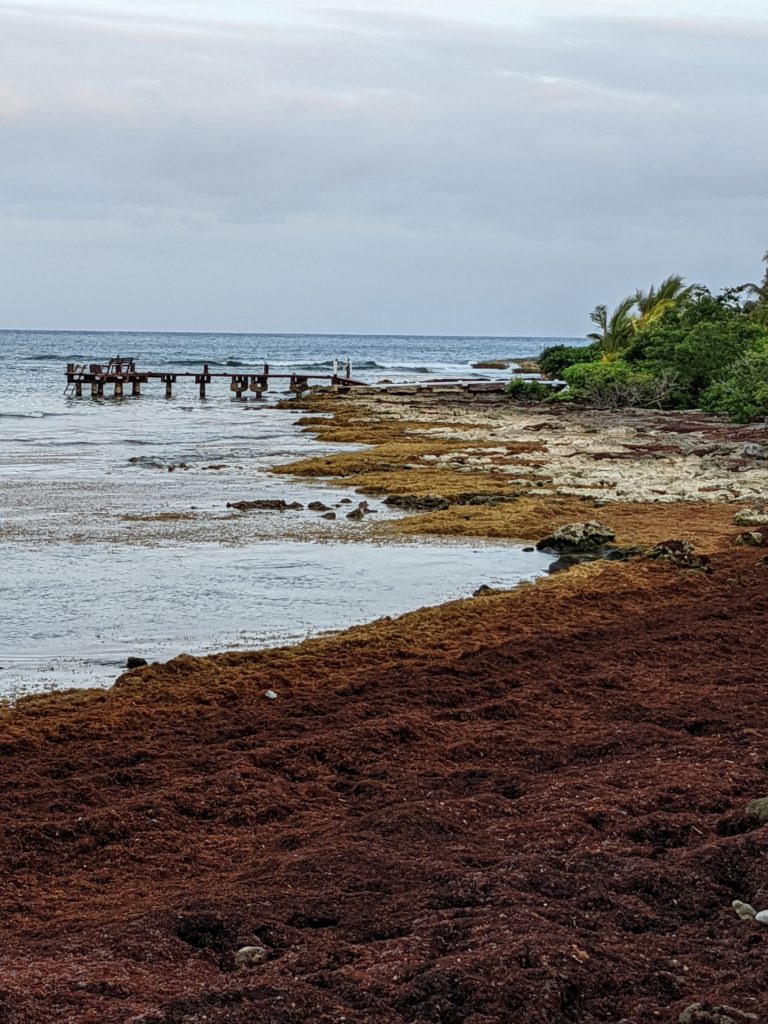 There’s probably a white sand beach under that heap of dying red seaweed.

We did go snorkeling in a seaweed-free lagoon called Yal-Ku. Some nice Minnesotans who seemed to be well-traveled told us it was the best snorkeling they had done in a while. We perhaps should have dug a little deeper into that statement.

Anner is a self-proclaimed, unapologetic snorkel-snob. She has a five point scale with 1 being Lake George in rural Minnesota, which she’s never actually snorkeled, but she’s pretty sure it’s just mud and beer cans. 2. Hanauma Bay in Hawaii which she would say is “fine” though caution you are likely to get kicked by a kid with a flipper. There’s 3 and 4 — don’t know what they are. And 5 is your own personal atoll in the Pacific. She ranked Yal-Ku a 2. Fine, but with a 1:1 human to fish ratio. Great place to go with kids or first time snorkelers as it’s mostly really shallow and there’s no coral to damage, just lots of rocks to stand on for a rest. The lagoon is filled with tours of life-vest-clad groups snorkeling around with life guards afloat. We saw more than one person tugged to shore by one of those guys with one of those life rings. The guides seemed incredibly patient and helpful, but that’s not Level 5 in our book.

The face of snorkel snobbery is quite excited to try a new spot.

Anyway, we went tour-free and just jumped in. Anner was nervous to not have a life jacket since everyone else had one (fear of missing out, I supposed) but turns out she floats just fine without it. We saw a few schools of fish along with some colorful parrot and trigger fish. As an added bonus there was also the occasional flipper to the face! Fun! Having not traveled in three years, it was though, technically the best snorkeling we’ve done in a while. Glad we went because we can forevermore say we did it and we live by the creed that you only regret the things you don’t do.

Our other really big adventure in Akumal was searching out all the street art murals in town (a bike ride from the beach) brought to us by the Akumal Arts Festival. Hopefully Aaron can do a more detailed post about it, but here are the high points. Just a few months ago, street artists from around the world descended on Akumal to paint approximately 100 murals all over Akumal! This was the 2nd year, plus there have been previous paintings, so there are a LOT of pieces to view! I’m not sure how many tourists know about the murals, but they are phenomenal. Basically, world-class art just waiting for the viewing. 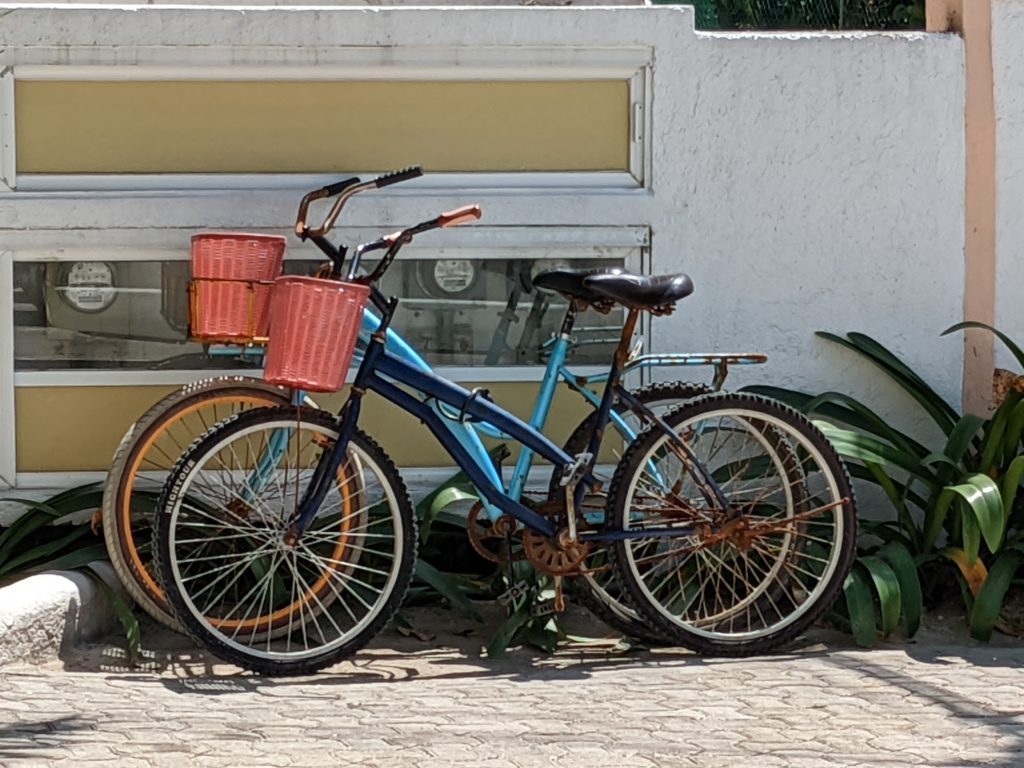 Some of our finest biking transport in our travel adventures were these gems.

Town, where most of the murals are, was about 2 miles away from our condo, and in the hot sun we decided bikes were the way to go. We asked a shopkeeper if she knew who could rent us a bike. Aaron’s high school Spanish, once again, was enough for her to call a friend…who called another friend, who showed up and pushed a bunch of junk to one side of his backseat and motioned for us to get in. Per usual we sussed out the situation, and with a little old lady sitting in the front seat, we agreed odds of this ending badly were low. We shared one seat in the back and proceeded to drive a block and a half up the road. Hilarious that he felt he needed to drive us there. He jumps out, we pry ourselves out of the backseat and take the bikes. He takes the money (a whopping $16 for the day…which turned into 4 days as he never came by to pick them up so we just kept using them!). We were good to go. 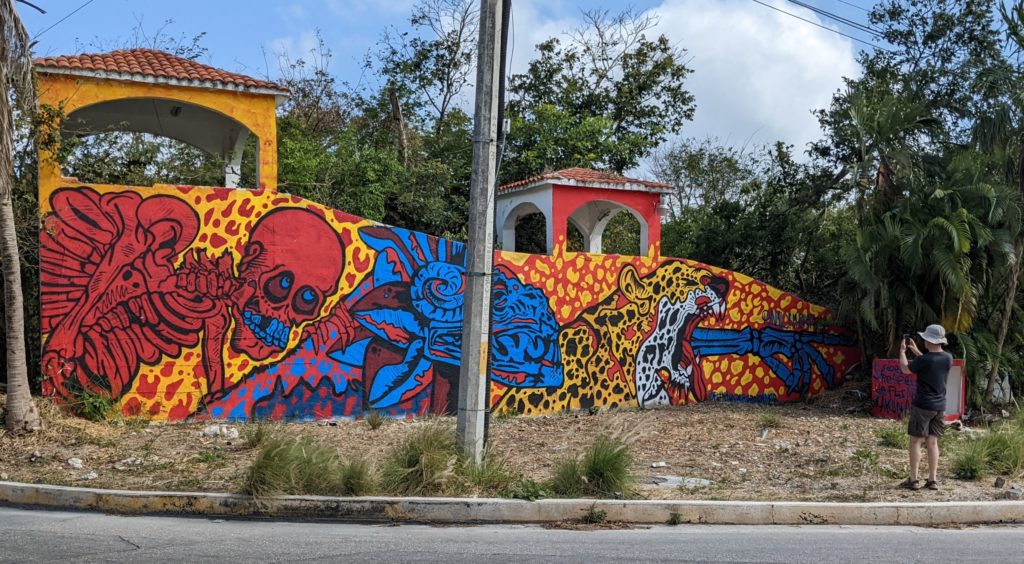 Anner has taken so many pics of Aaron taking pics of murals she could do her own coffee table book.

With wheels of our own we spent the rest of the day making our way all through the town of Akumal proper (aka, away from the beach and the seaweed), looking at so many amazing and wonderful murals. Many, many featured women and female artists which is a treat to see. Also a lot of turtles and tribal themes (Akumal is known for its’ sea turtles, though we never saw any). We stopped at a little shop for waters. We stopped at another little shop for pan (aka – cupcakes) and yet another little stand where we bought cut up mango from a shriveled up old lady who complained about prices in town and told us she was the only one we should buy from. We agreed. We saw murals by a couple of artists that we’ve seen on our other world travels which is just incredible. Thanks Aaron for remembering them all and putting it together. 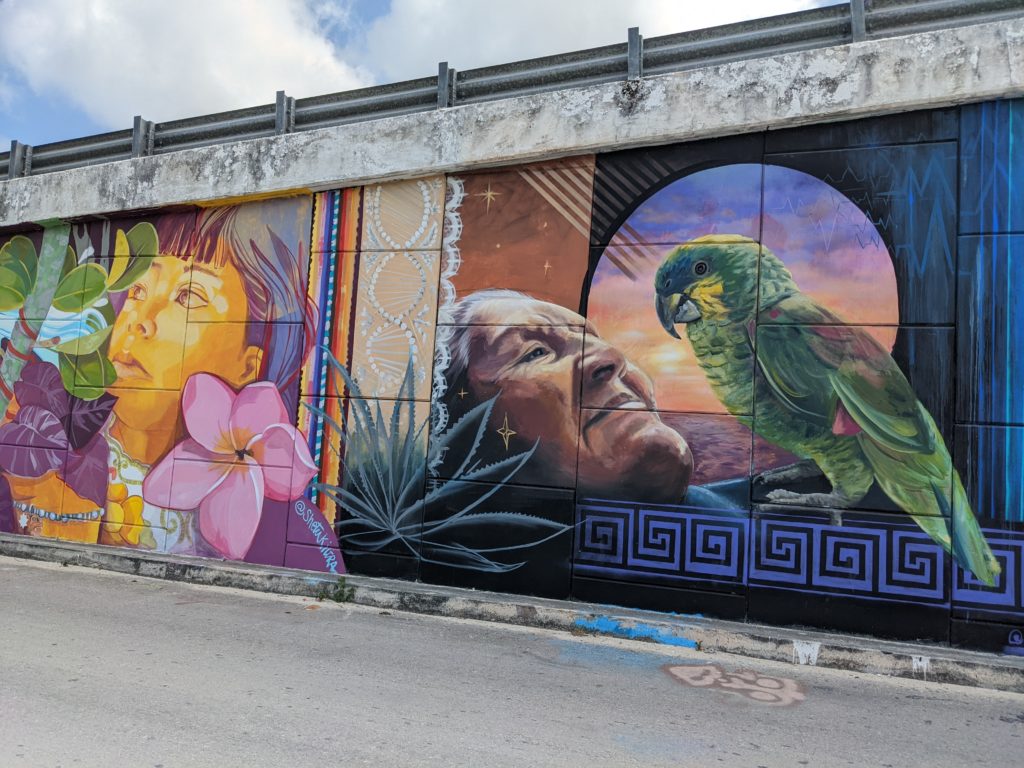 Anner really like these two murals by different artists. The girl and older lady are separated by what looks like lace, but if you zoom in you’ll see its DNA. We spent probably 4 or 5 hours just biking around the city, taking breaks for mural enjoyment and snacks. Very nice.

The rest of our Akumal time consisted of laying around reading, scrolling social media, celebrating Ketanji Brown Jackson’s confirmation, and eating food that was just fine if not spectacular. Also, watching the waves. This was the perfect start to vacation.

Thanks for the good times, Akumal. Next time – less seaweed please!

« Pom Poms: not just for cheerleaders
Oaxaca: The Highlights »