This Hill Won’t Beat Me 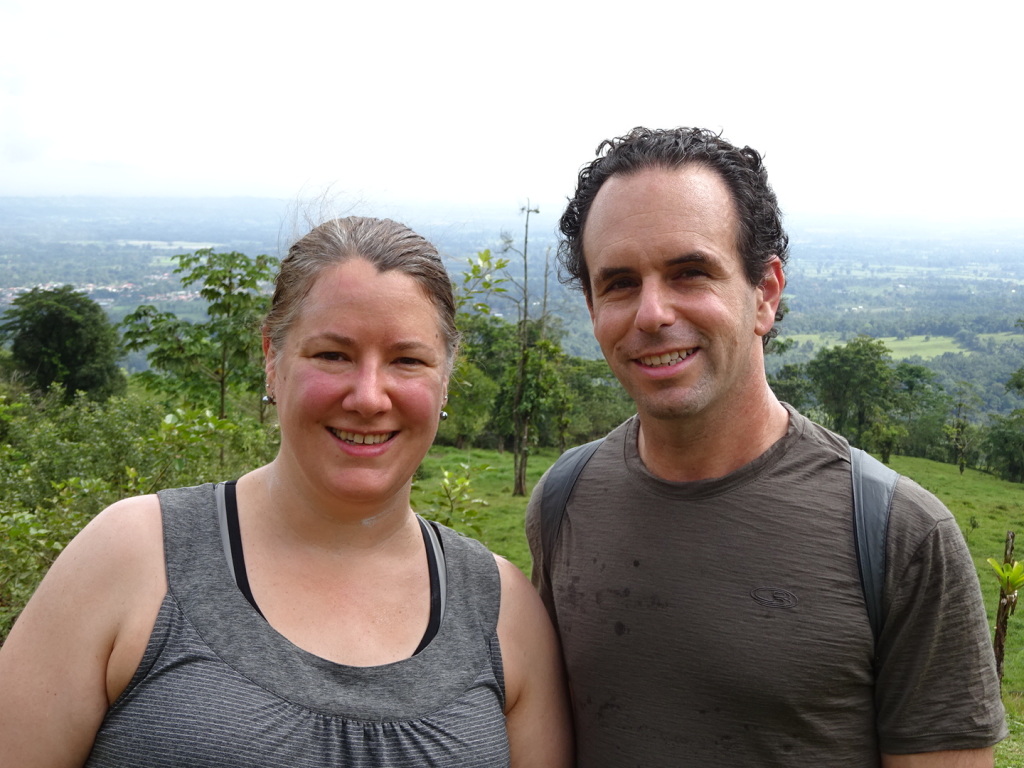 Hiking Cerro Chato – the start (we look so happy…and naive)

We started hiking up Cerro Chato about two hours and 1 1/2 miles earlier.  I know my friends are numbers people so I am just assuming we hiked a 90-95% grade.  Why not, I mean, at least that is what it felt like.

I could do nothing but repeat this mantra for the last bit of the way up the hill.  About the time when I just wanted to toss in the towel, Aaron cheerily told me this tale: “When I used to bike up Fremont Hill, I just kept saying to myself ‘This Hill Won’t Beat Me!'”  I don’t know how he can be cheery under ANY circumstances, but he has the gift. 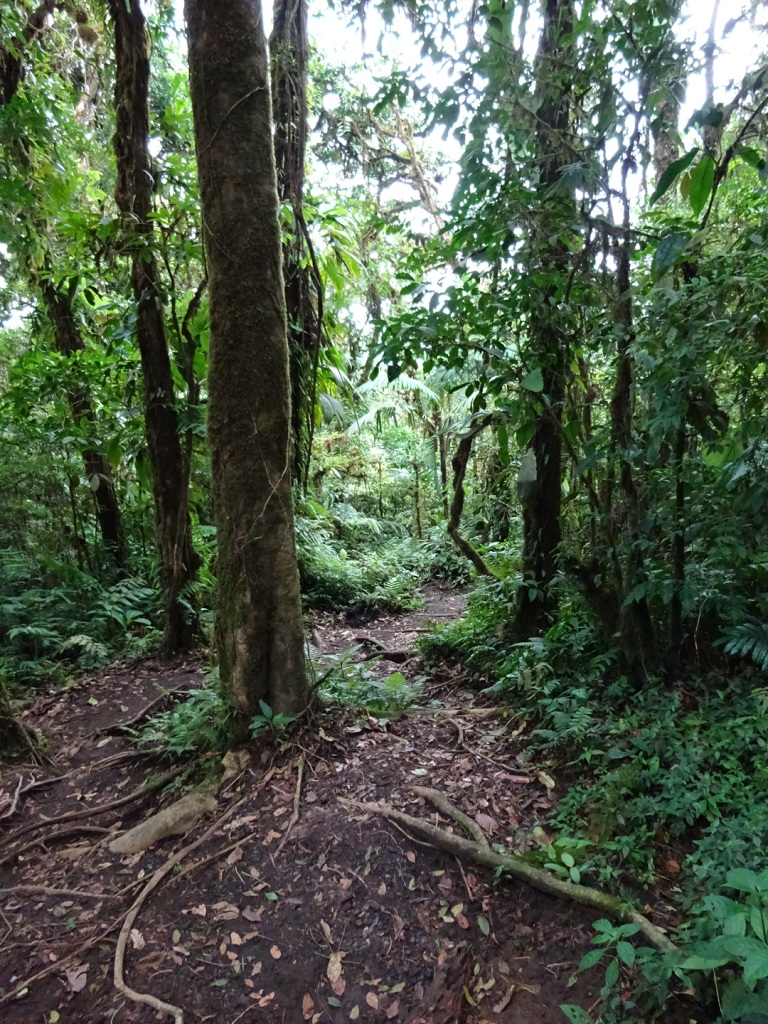 Aaron picked this hike and I have reminded him of that more than a few times, but here is the good news: We Made It!

Cerra Chato is a hike up the baby volcano next to the Arenal Volcano.  It’s about 4 miles round trip (6km) with the ascent being pretty much straight up – no friendly switchbacks like we have in the Cascades.  The goal is to reach the caldera and take a swim in the lake at the top!  We have befriended a really nice guy from the UK, Matthew, who joined us on the hike.  He is a computer programmer…just the kind of fella we would hang out with at home…on a 6-9 month trip and a mere decade younger than us.  He told us that technically speaking he is the last year of babies born into Gen X, so we are happy to have the company of someone more or less our age.

Anyway…we got lucky as a group – we’re all woefully out of shape and hiked slow. The trail was not packed.  The clouds kept things from being wicked-hot (just regular-hot), and no rain.  Perfecto!

We made it to the top, just to find that the bright green lagoon was now way down the hill.  We headed down to it, and it was just treacherous.  I barely started down when I declared there was not way I was going. (My exact words may have been something like, “this is stupid!”) Aaron and Matthew continued on, while I stayed at the summit cheering for people who made it up after us and then took their photos. There was another woman who agreed “this is stupid” and turned back. By the way, several compliments on my photography! While I was there, I found out there was a much more civilized way to the lake on a different turn-off of the trail, but we did not know that. So I waited and the fellas eventually made it back up to join me.  Aaron did the swim – glad he feels accomplished.  🙂

This is the lake in the caldera, not a baptism – promise!

Then a quick 90 minute descent over mud, rocks, tree roots, and giant rocks and *poof* we are back at the lodge start! We are now a part of a club of folks with sore knees from doing what felt like moguls back down. Other people at the lodge recognized us from the trail and we all exchanged stories. Remember that rock I mentioned at the beginning?  Well, I somehow sliced my leg on it on the way back down, so I think I won the story exchange (no pain and not a big deal, but it made me seem so hard core). Cerro Chato was hard, but I am really proud of us for doing it!  Yay us…and the hill didn’t beat me!!! 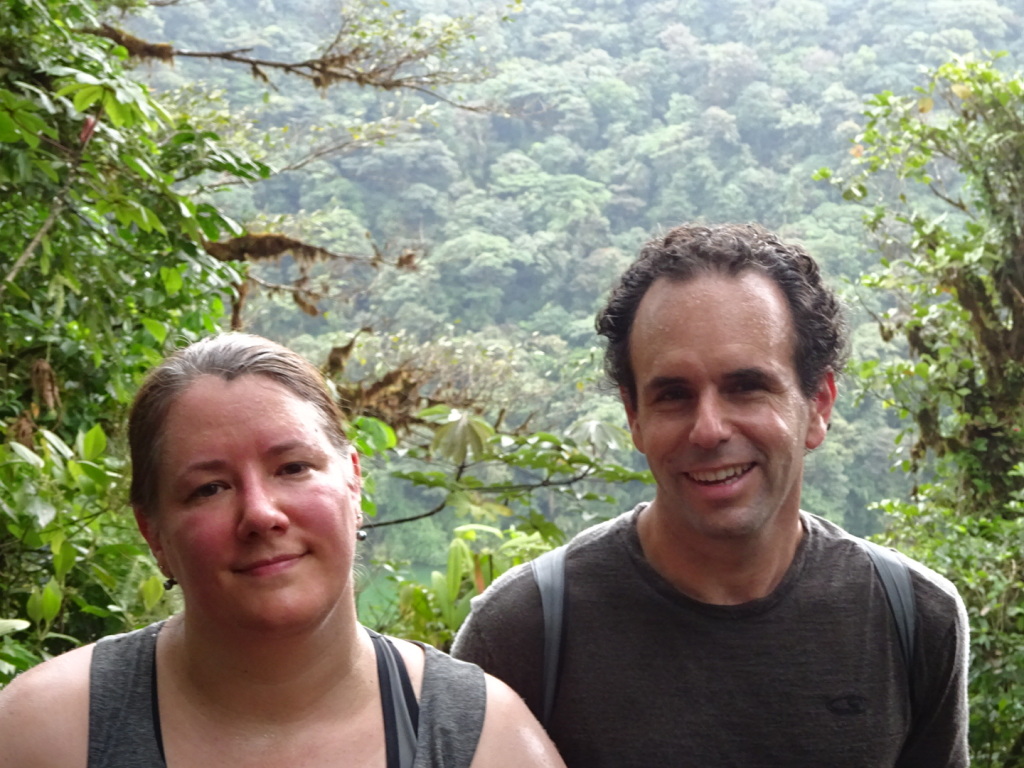 This is the end. Naive no more. …how can Aaron still be smiling? My expression is more honest.

Update: 2 days later and our thighs still hurt – ouch!!!!  If you see the couple waddling painfully around town, that just might be us…