A Wales of a Good Time!

We left sunny Bali only to land at soggy London Heathrow. For a second my mind screamed “What the heck were you thinking???“, but as we headed out on the motorway to Wales, let me just say it didn’t take any time at all to know we had landed somewhere special.

Cardiff, Wales was to be our home for the next two weeks as we went house sitting once again. Graham and Sarah, our new clients, welcomed us into their home along with their two super happy, curious, wiggly and completely loveable rescue dogs, Billy and Bella. Their warmth and hospitality quickly allowed me to forgot the rain.

First thing’s first: Graham and Sarah hooked us on the fine sport of rugby. Back in the states you have no idea, but the Rugby World Cup was underway and England is the hosting nation. It’s big doin’s and much of the world was watching. Think: a month long Super Bowl held every four years. Graham and Sarah sat us down and taught us all the ins and outs of the game while watching on their wall-sized TV screen. (Yes, wall-sized. And after you watch rugby, Star Wars, Hunger Games and binge watch Madam Secretary with a giant Tea Leoni walking through your living room, you’ll want one too.) 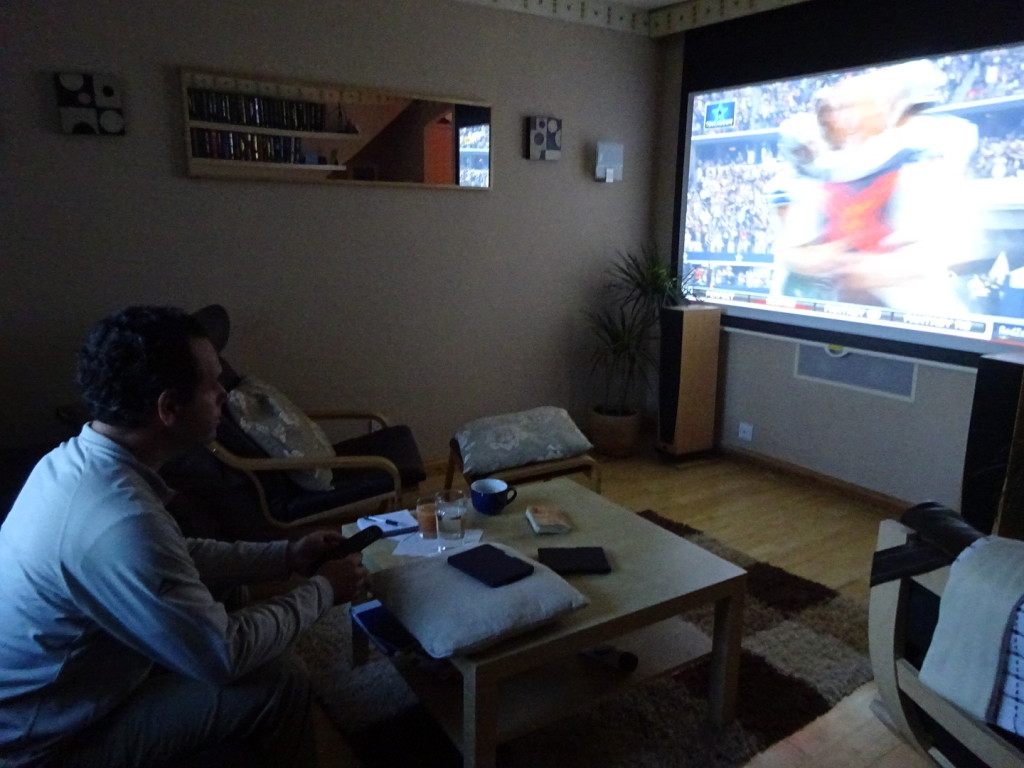 Get a load of that screen!

Our first game was a big rivalry…England vs Wales had a grip on all of the UK. Prince William is the patron of the Wales team and gave a little speech before attending the game in person. England was favored. We all yelled at the TV/wall and gasped and groaned and held our breath….and then Wales won!!! Mayhem!! All of Cardiff was floating on a cloud. I was sold on rugby and watched the entire tournament through the New Zealand All Blacks taking an unprecidented second title in a row. 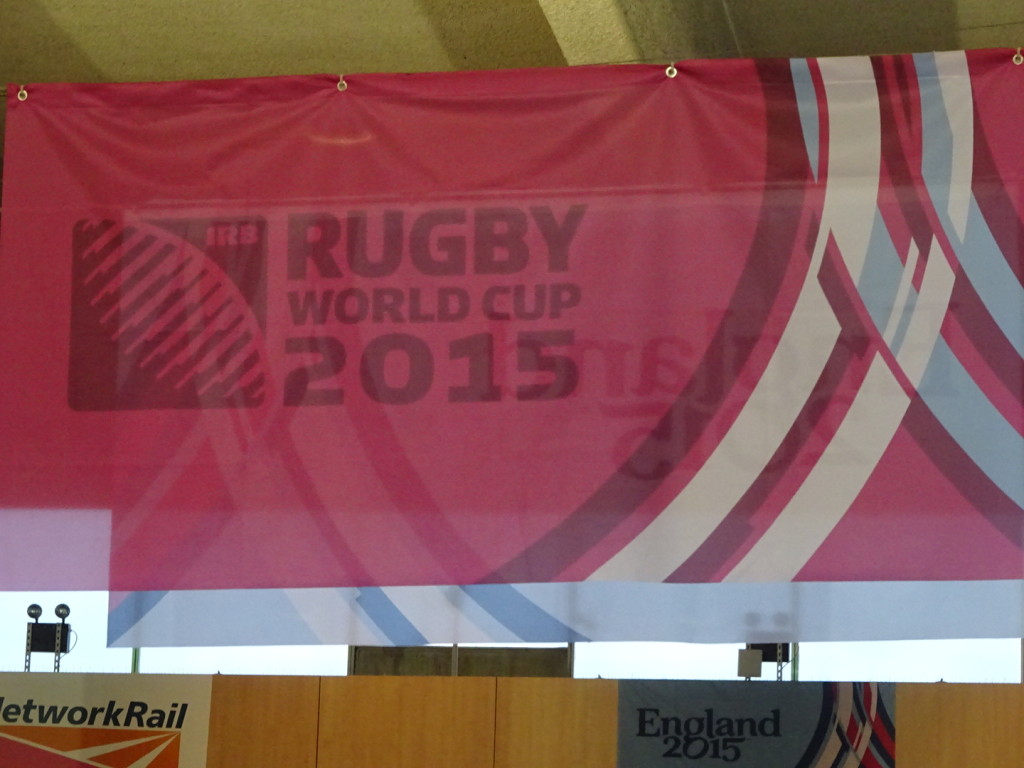 Graham and Sarah could not have been nicer more generous hosts. They gave us an overview of how to order fish and chips (you order “chippies”), gave us a car and firm directions to get out of town and go see Wales, and left us a house full of food…which we devoured.

We spent our days caring for sweet Billy and Bella. Bella is a youngster who would slink into the living room like she was wearing the Cloak of Invisiblity hoping we wouldn’t notice her “sneaking” up to us. Billy would do his own sneaking by very quietly and s-l-ooooo-w-l-y putting one paw on the couch and then the other. Like you might not notice him climbing up right next to you! Hilarious! We really could do nothing but give them big scratches behind the ears while saying “AreYouASneakyDogOhYesVeeeerySneakyWannaWatchGiantTeaLeoniOfCourseYouDoYesYouAreStillSuperSneaky“.

Bella is a lover, not a fighter.

Once a day the dogs would walk us. They were not so keen on the lead (leash). To Bella’s credit she had a vertical leap that was about eye-height on me. That’s one springy dog. We naively thought we could wear them out with long walks. Not so! They were much more likely to wear us out! 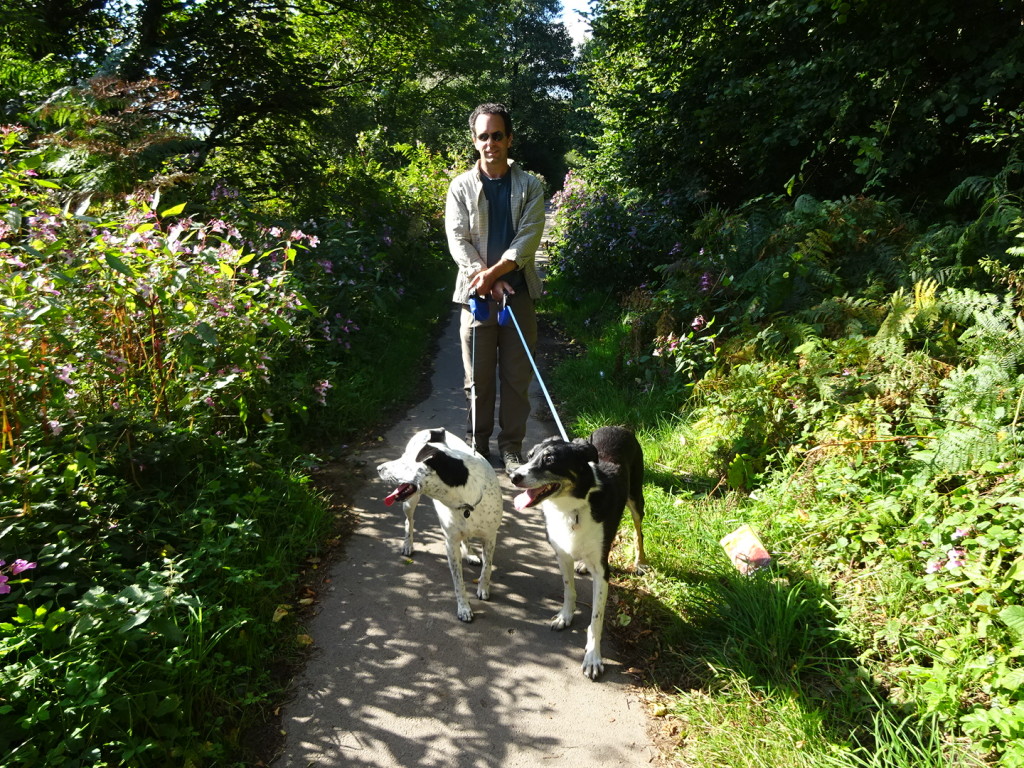 Look at his arms get longer as he walks. These guys could PULL!

One day we got brave and took the pups to an area of coastal Wales called The Gower to walk along the rugged shore. It’s everything you’ve seen in the movies or imagined in story books – green fields filled with sheep, rocky cliffs overlooking the ocean, a loooong sand beach far below. There’s even a shipwreck that you can see during low tide. When I say straight out of a storybook, I mean it! You could just imagine King Arthur out there fighting against invaders (not that I know if King Arthur ever did that, but you know what I mean). We walked for a couple hours over hills and along the brush…Billy and Bella did not let up. In fact, they were probably just getting started. Where does that energy come from? Harness it and light a city! 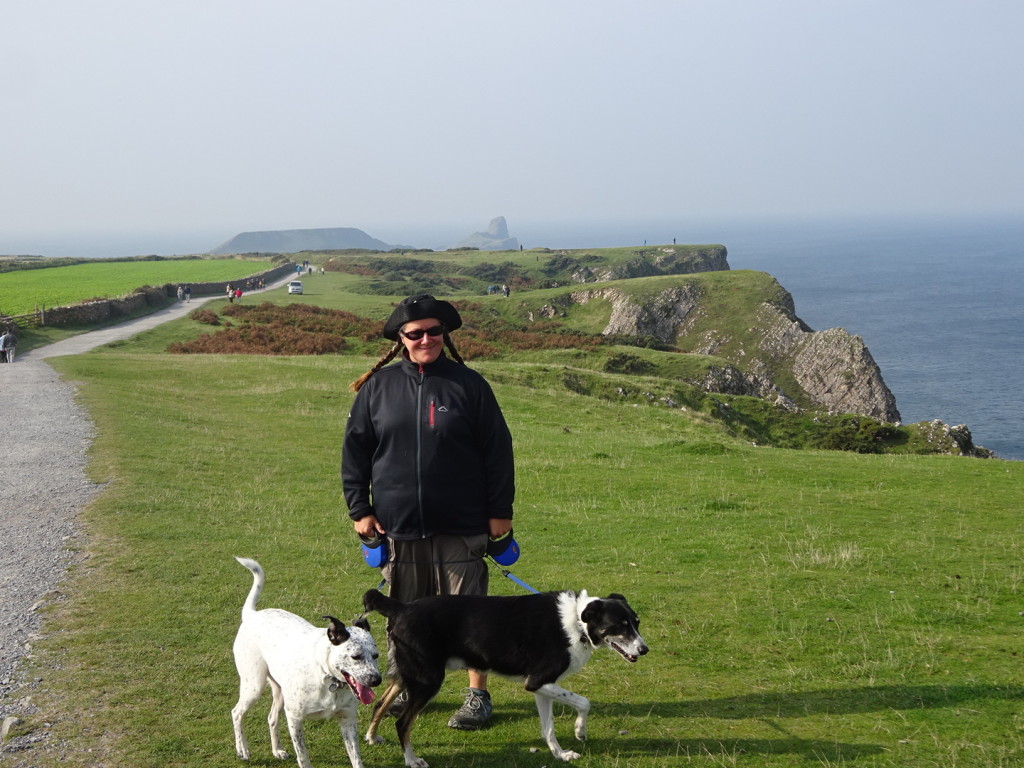 First few feet of the walk in The Gower and it’s already spectacular! 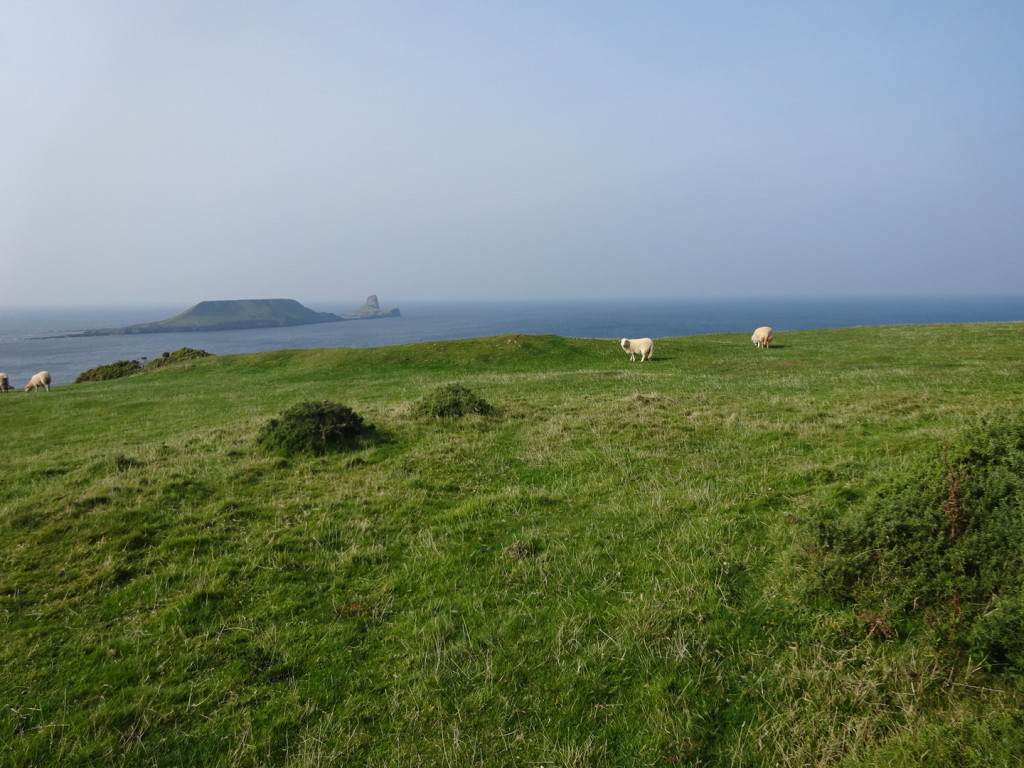 Baaaa. What story-book photo is complete without some sheep. 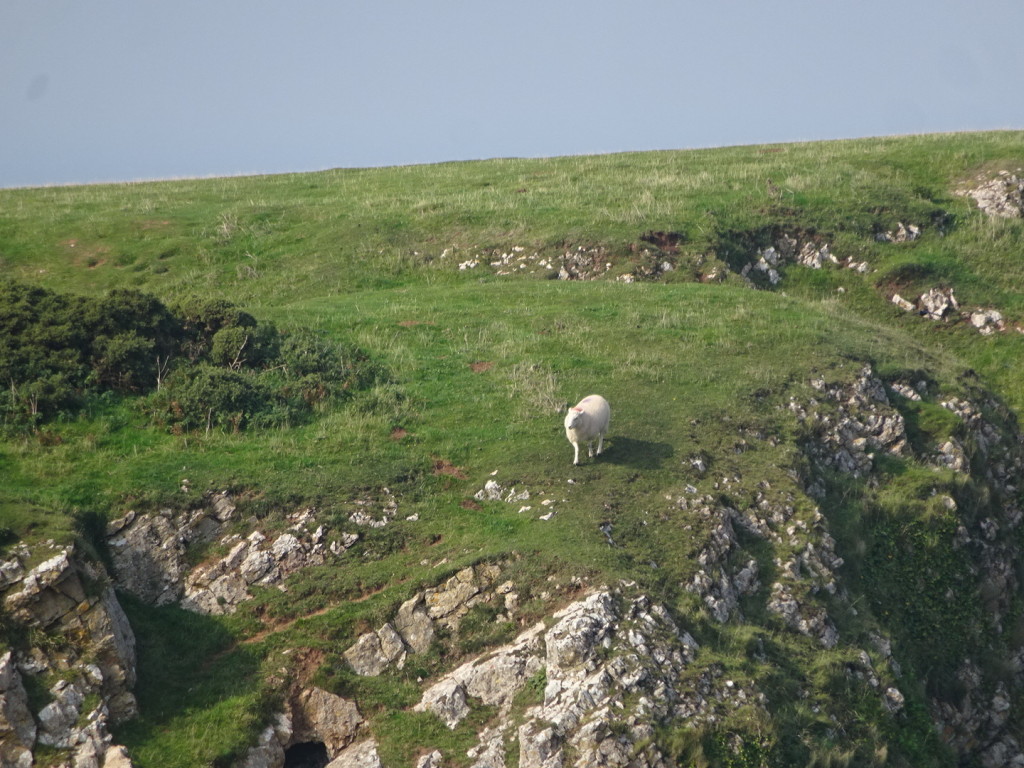 The sheep certainly weren’t scared of the cliffs. Lets just say we didn’t go quite that close… 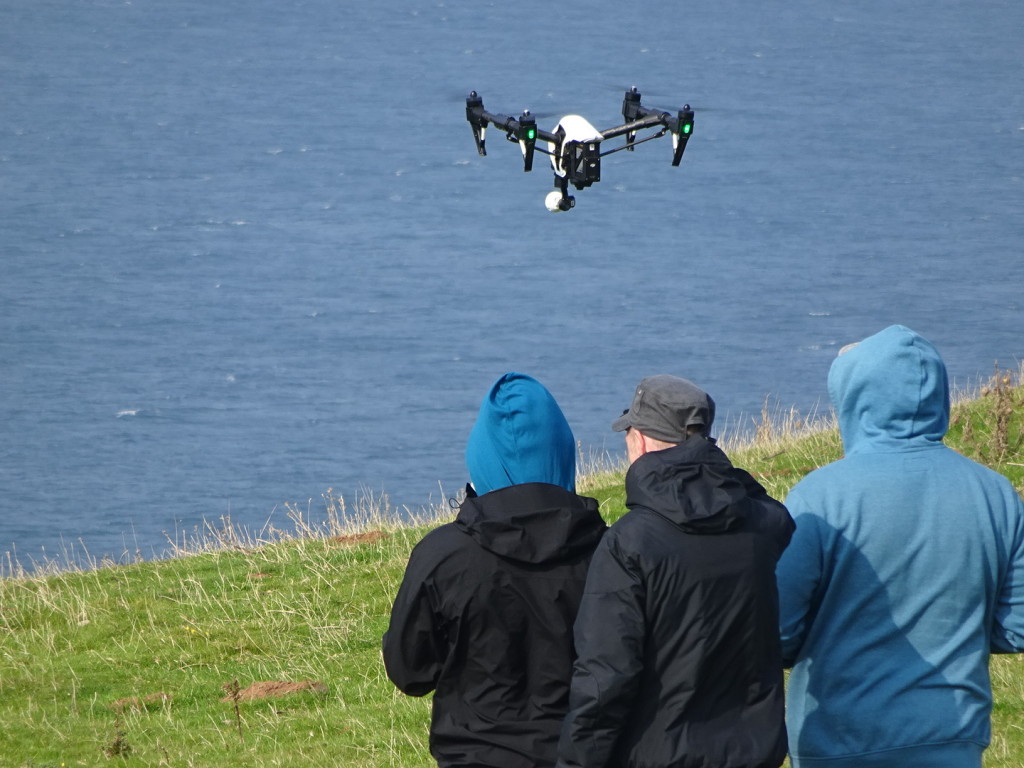 Cardiff was home to our first castle sighting of the whole trip! Guess that’s not too surprising when we hadn’t been to Europe yet, but we were ready to explore a little history. Castell Coch (pronounced Cock…really) is kind of a modern castle being built by John Patrick Crichton-Stuart, the 3rd Marquess of Bute, in the late 1800’s. The Marquess was a big fan of medieval times and he had Castell Coch built upon the site of a previous castle ruin. The Marquess and his team worked to rebuild the castle as it would have been built hundreds of years earlier and one or two rooms are actually still original! 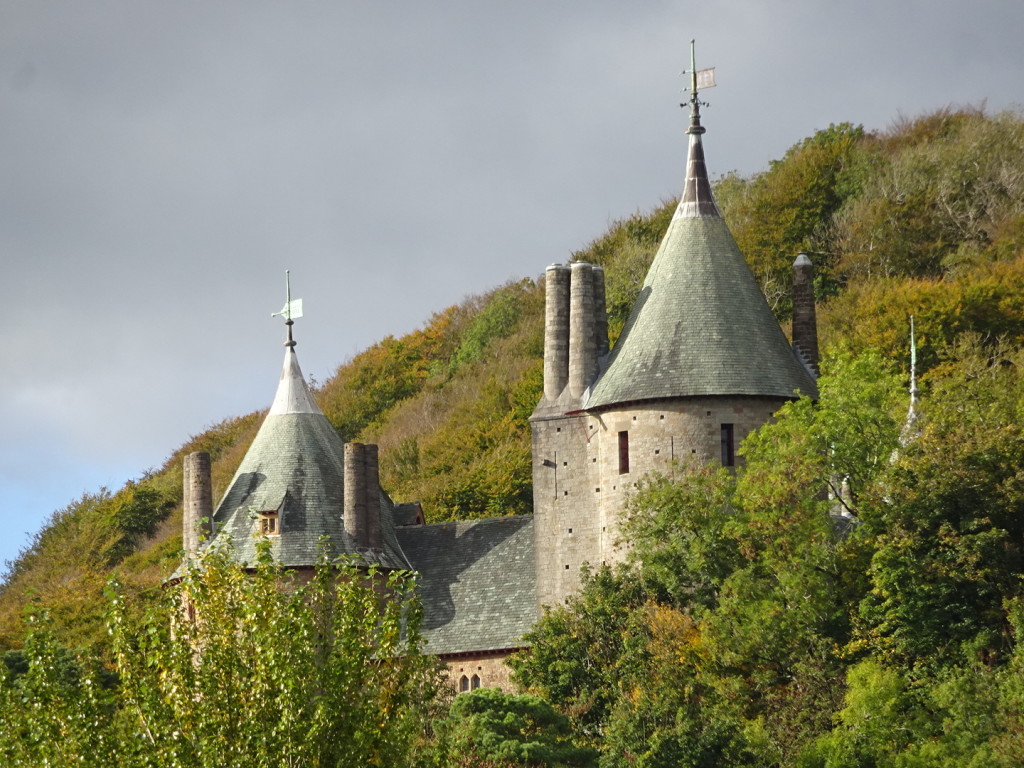 It wasn’t just The Gower that was story-book. Seeing Castell Coch through the trees was magical! 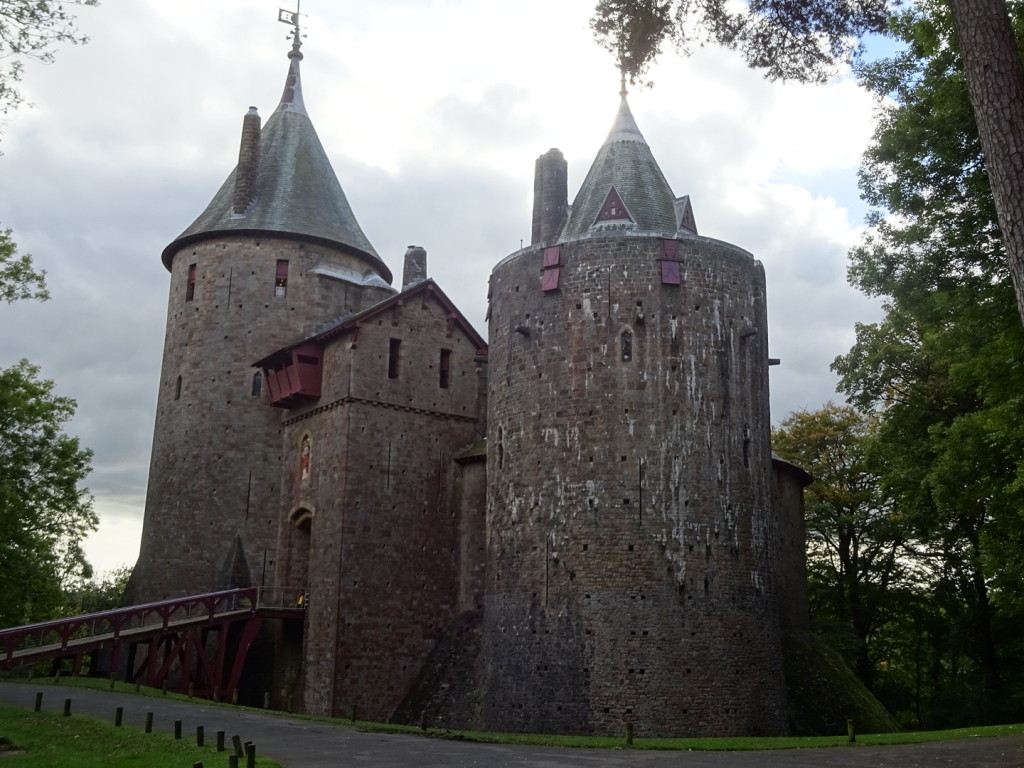 Castell Coch up close and personal.

The rooms were all surprisingly small so apparently it wasn’t much good for the type of entertaining the Marquess wanted, though you can rent it out for your next party, in case you were wondering. 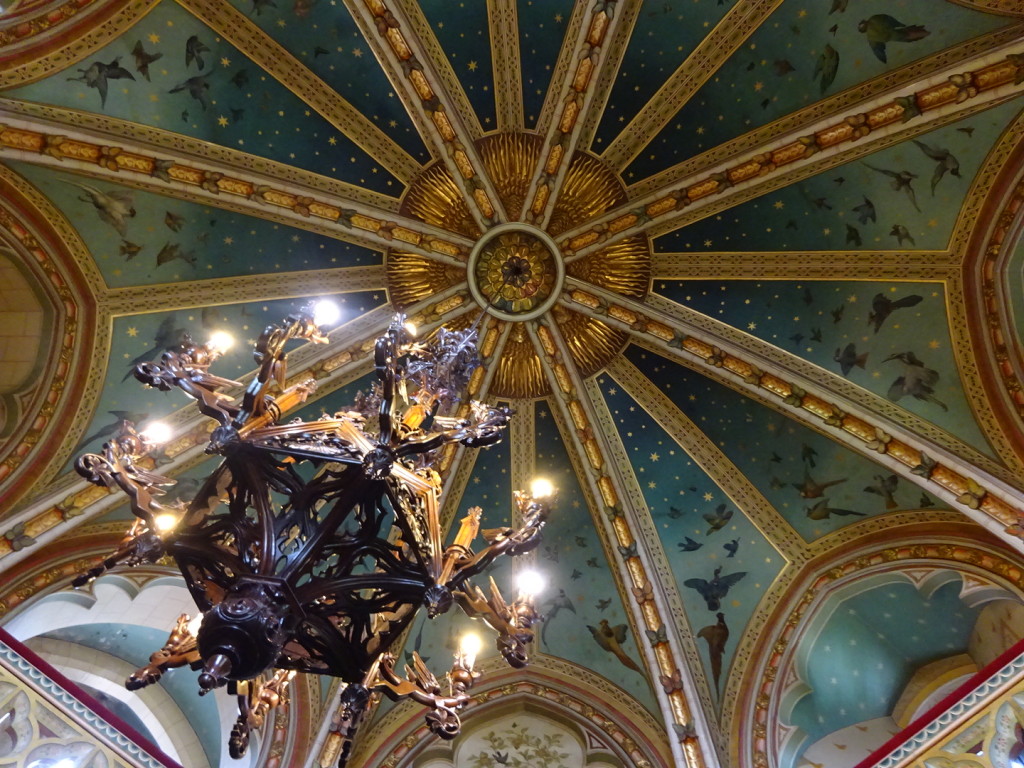 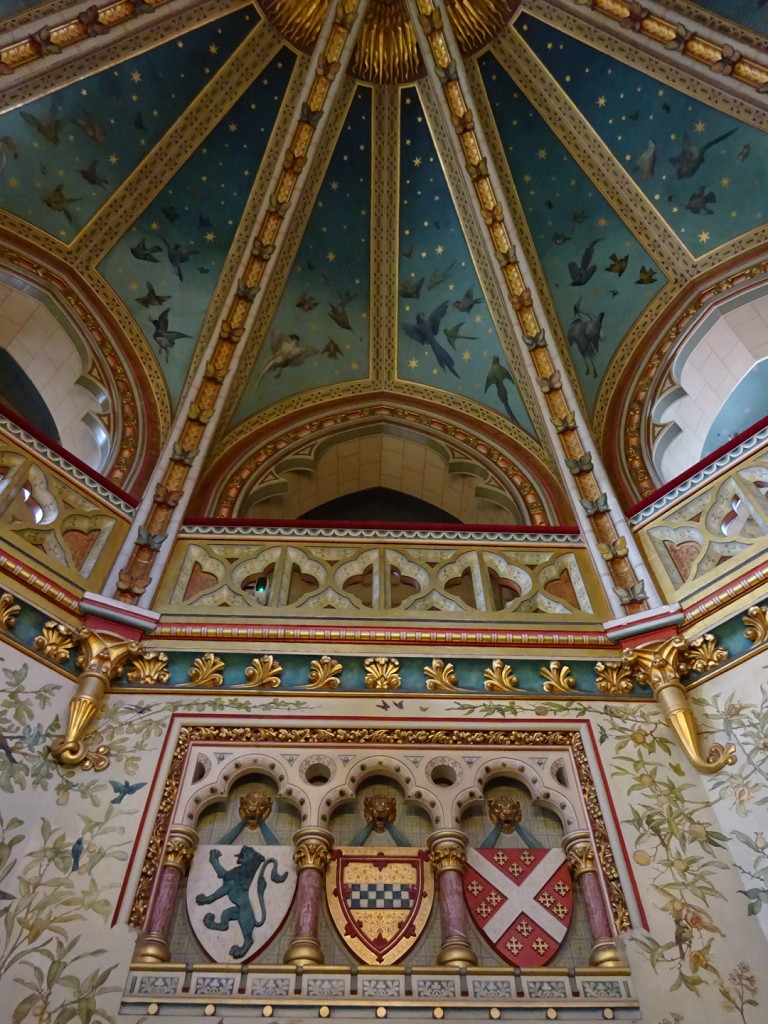 The drawing room….I could draw in there. 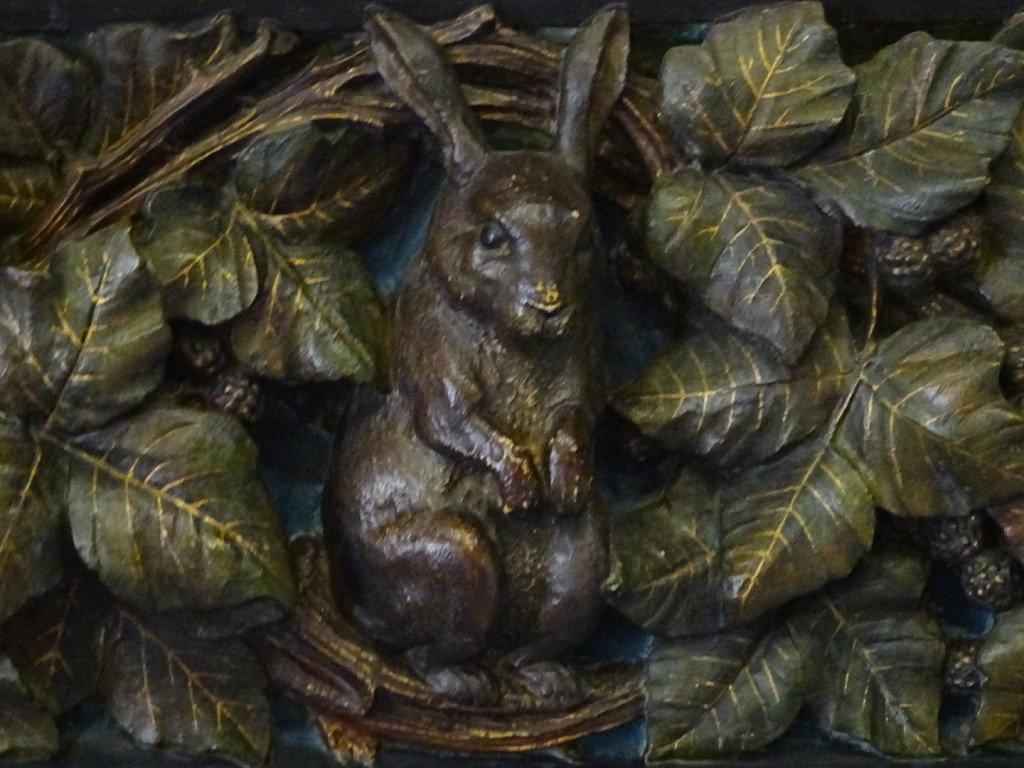 A bunch of fairy tale characters were carved into the drawing room. There was a lot of fantasy throughout the interiors.

How about a bed with crystal balls on the bedposts? You know you want one!

The Marquess and his family didn’t spend much time there and once it was built he was already rebuilding a different castle. He was sort of a Flip This Castle kind of guy. While we were there, one of the castle caretakers struck up a conversation with us – where you from, traveling for a year, no way!, how do you like the Rugby World Cup…a stranger making us feel totally welcomed which would become a theme throughout our time in Wales. In the UK as a whole, actually.

Aaron found a game night hosted in a pub in downtown Cardiff. If you know Aaron, you know he’s a big time gamer. Having missed game night for nearly a year now, we HAD to go. When the organizers learned we were new, they immediately found some local regulars and paired us up. All the game night folks were incredibly welcoming (even though Aaron kept winning every game). They even invited us back the next week and we were happy to say yes. For those who might find it interesting, they were all part of a theater troupe which only puts on plays based on the Discworld series of books by Terry Pratchett! So many great niches out there for folks.

Friendly gamer types with a fine round of Seven Wonders!

We also spent a day down at the Cardiff bay, a pretty, but touristy, part of town. Searching for an art gallery, we asked some parking policemen for directions and once again found ourselves engaged in a long conversation about where we are from, all the places we’ve visisted, learned about their families, and got their take on the Rugby World Cup. These meter-men were kind of like the uncle that gives you a hard time but then slips ya a beer when no one is looking. They were hysterical!

Interesting building at the harbor. 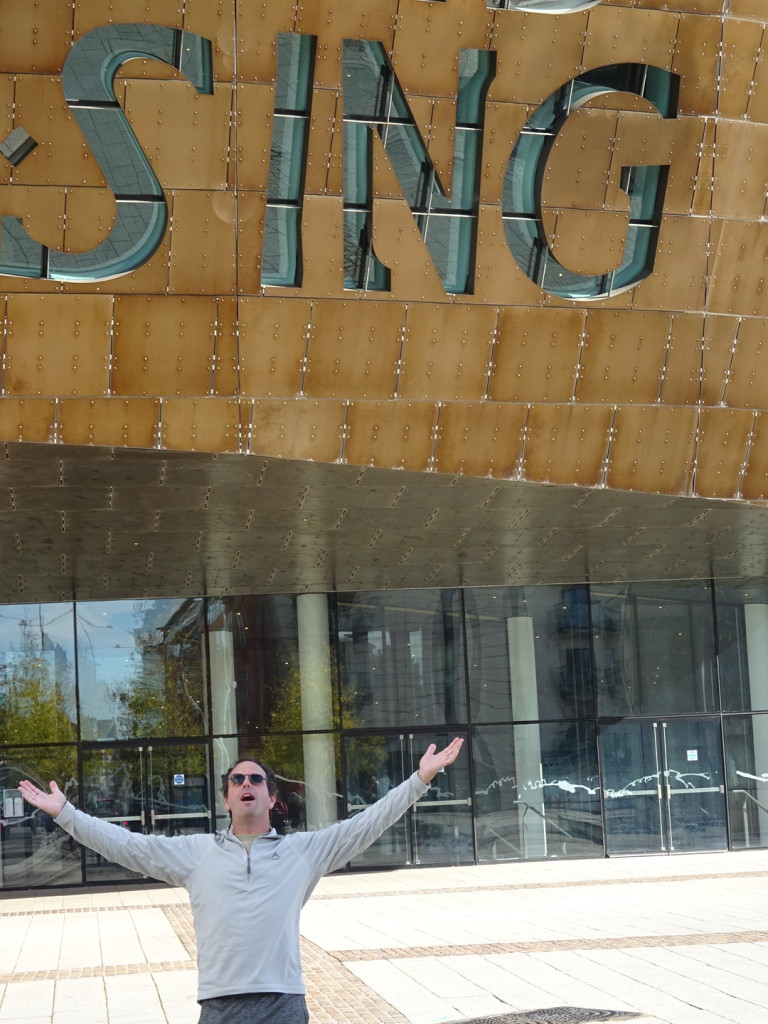 As a quick aside, did I tell you about the post office attendants? Well, when we went to ship some stuff back to the US they waved us into the post office area, (actually waved us in!) told us how to get the cheapest rates on our package (breaking it into two was cheaper than one big one), then went out and found free packing materials for us, and practically helped us pack our box for shipping. I think it says a lot about a place when the post office and the parking attendants are both gregarious and helpful. 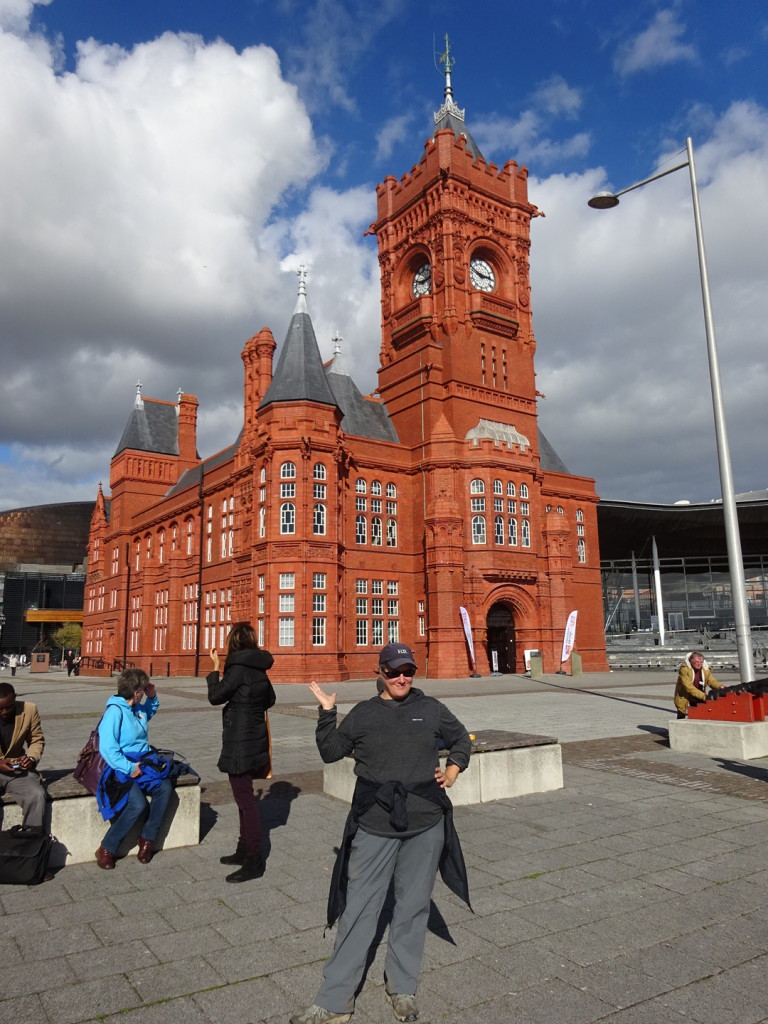 Back to the harbor. We visited a museum where the receptionist was SUPER happy to talk to us about the upcoming rugby game, he was rooting for South Africa having worked there for a year. More nice folks. After enjoying the bay in the sunshine, we decided to hit the gallery we’d originally come down to explore! Cardiff is considered the craft capital of the UK (at least according to one article in The Guardian) and we were not disappointed when we walked into the Makers Guild Craft in the Bay gallery. Absolutely one of the finest craft galleries we’ve visted! If you ever get a chance, it’s big, it’s diverse and it’s high-quality. We left empty handed, but it pained us to show that kind of restraint. 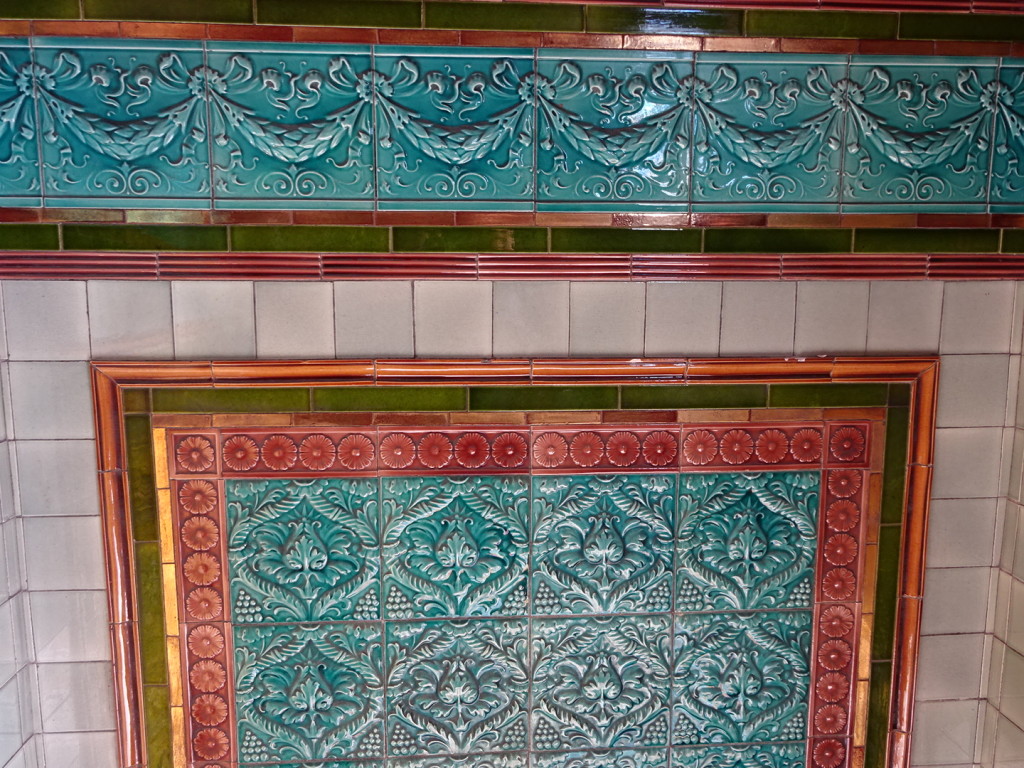 Pretty amazing tile work showed up everywhere in Wales, including the entry way to homes. This was in the museum at the bay. 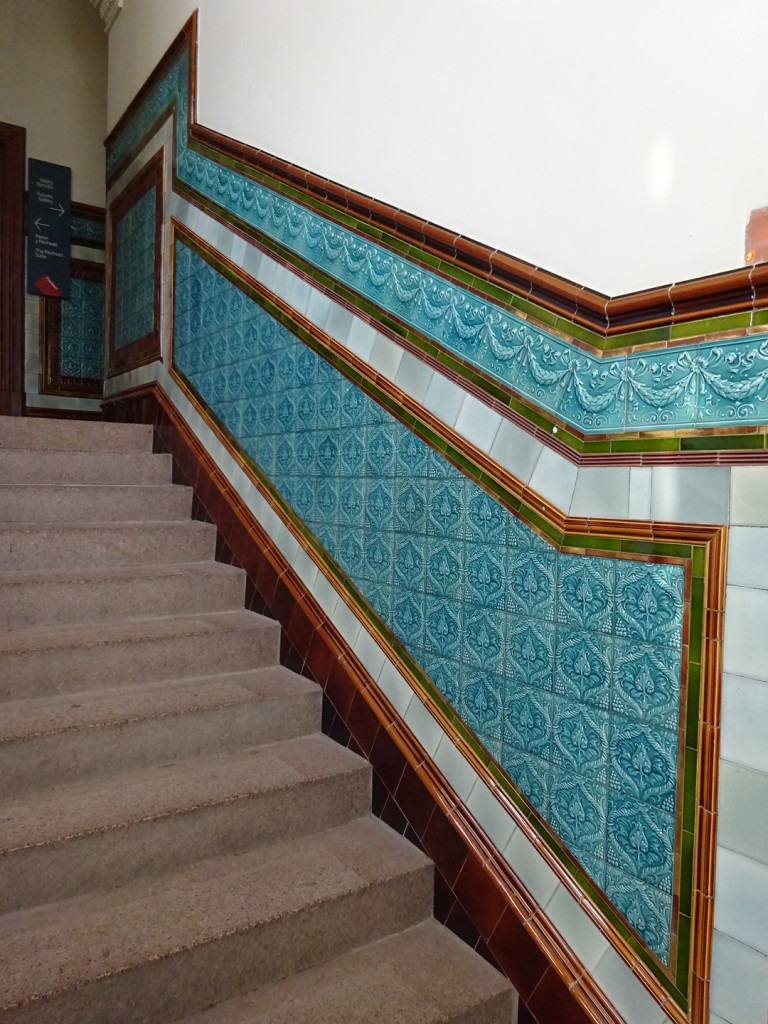 Eventually our hosts returned and we had no choice but to give Billy, Bella and the wall TV back. We said our goodbyes and hope to see our new friends again someday. Perhaps in Seattle?

Gotta say, Wales was about as easy an introduction back into the first world as one could hope. People were unbelievably nice. There was hot water in the shower every day and drinkable water came out of the faucet every time. We ooh’d and aah’d our way through the well-stocked grocery stores. Pretty glorious, but more than anything we’ll remember the hospitality of Wales. One of the friendliest places we’ve ever been. 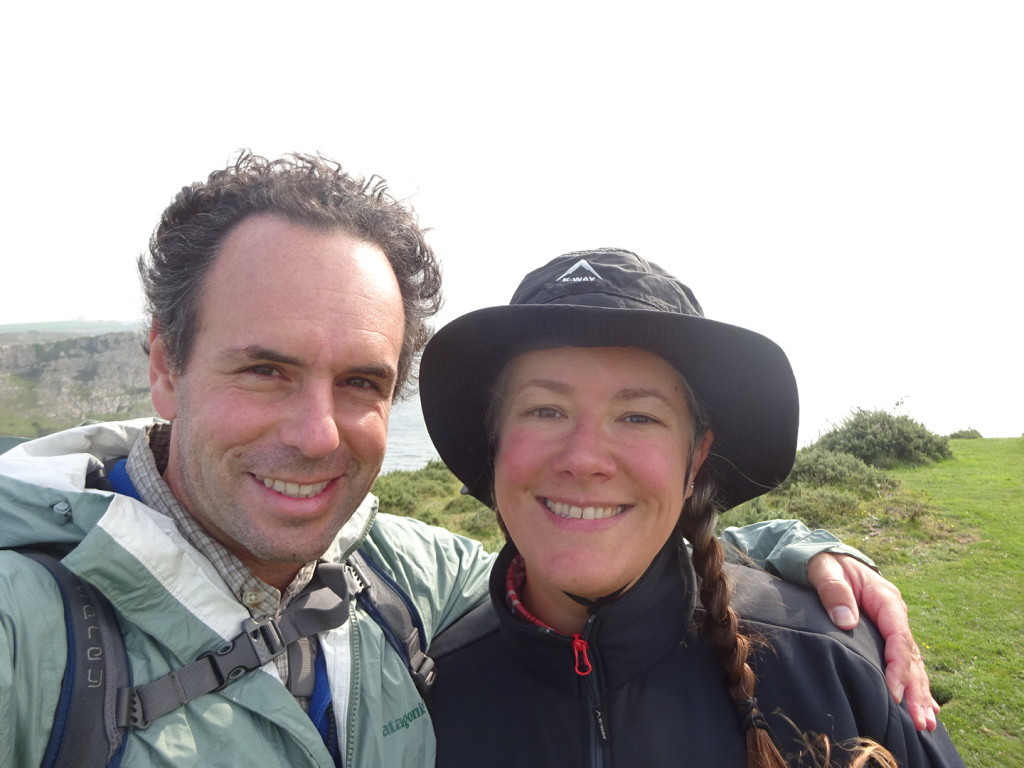 A couple of smiling faces out at The Gower.