We had just two days before our next housesit and I really wanted to go to London. In a perfect world I wanted to go to London, stay somewhere posh, go to a show in the West End and have tea somewhere schmancy. Dare to dream. Heck, how did we end up on this trip anyway, if not daring to dream? So, between outings and dog-walking in Wales, we researched London – which proved to be outrageously expensive. It would take a month’s budget to pay for the little weekend I just described! Um… We quickly revised the dream and embarked on a differently-fabulous London Holiday! 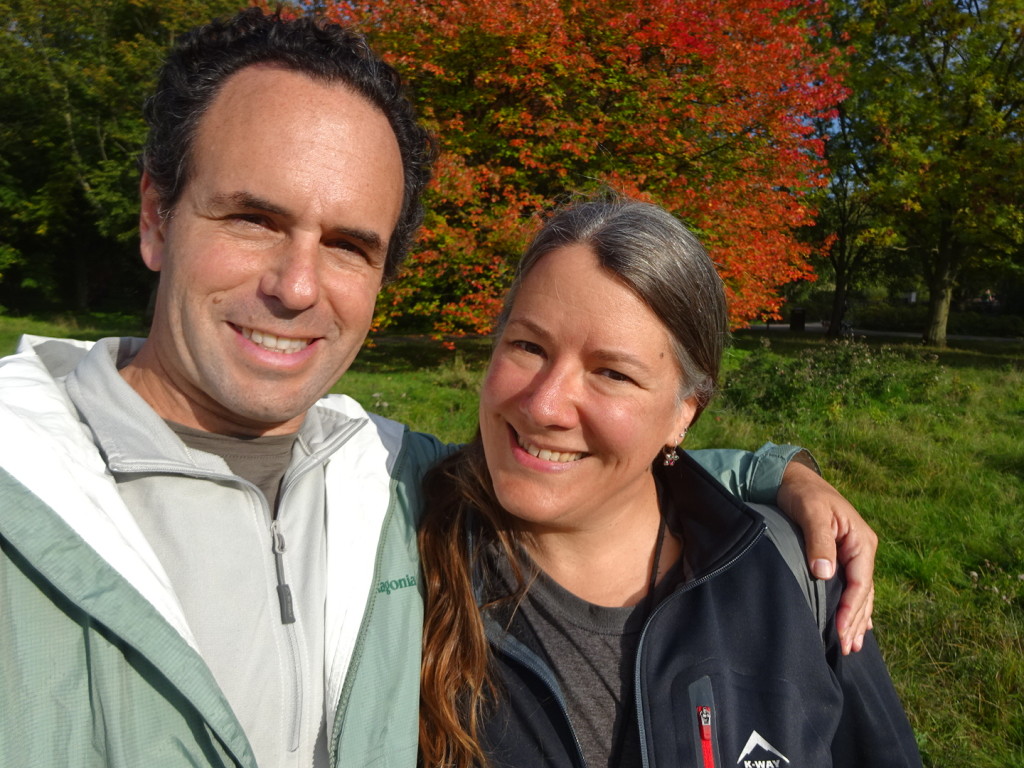 A stroll in the park in gorgeous, sunny London.

First Aaron needed to make contact with his cousin Gideon whom he hadn’t seen in 25 years or so. What’s a quarter century among family? We were thrilled when Gideon and his girlfriend Karolina said we could sleep on their living room floor. We’ll take it!! Their flat was in a great location for sight-seeing and Gideon volunteered to be our tour guide, taking us all over during our quick two day visit. Awesome, we’ll take that too! 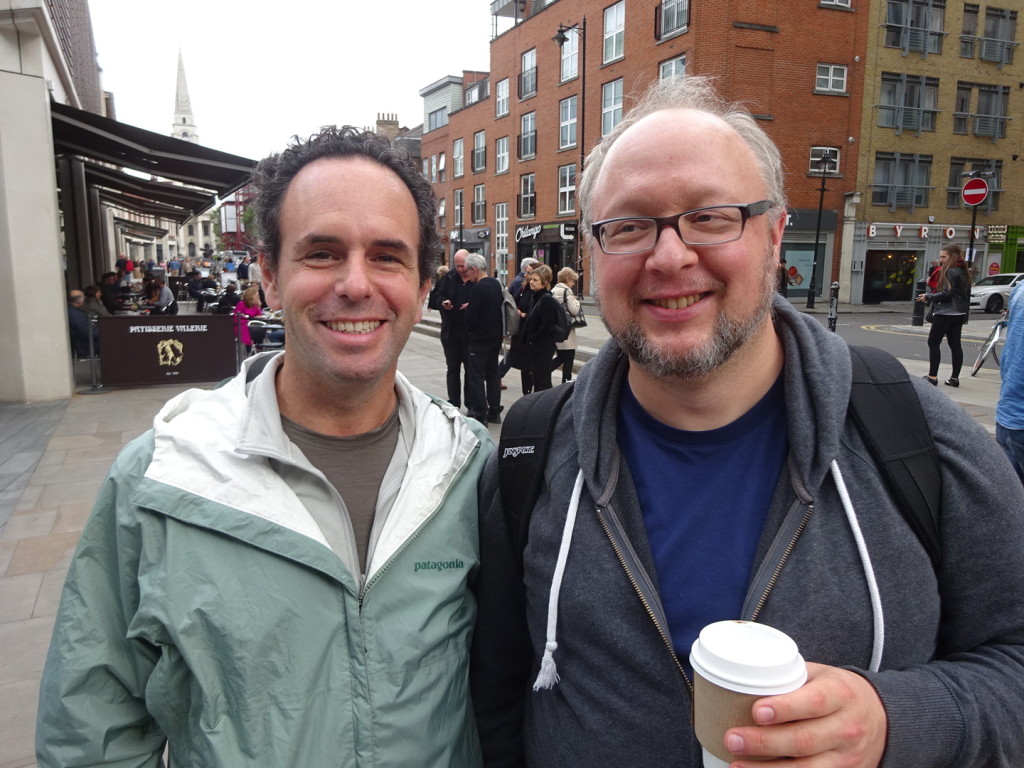 Handsome runs in the family! …but let me just say, I can totally understand why Gideon keeps an eye on his cousin…he’s shifty!

Gideon told me how he remembered his older cousin having many collections that were all perfectly ordered and how everything he did had to be precisely planned out. Ahhh, yes… and that teenager grew up to be a guy who threw caution to the wind and took off for a trip around the world with almost nothing planned at all! Luckily none of us have to be our 17-year-old selves. Whew. 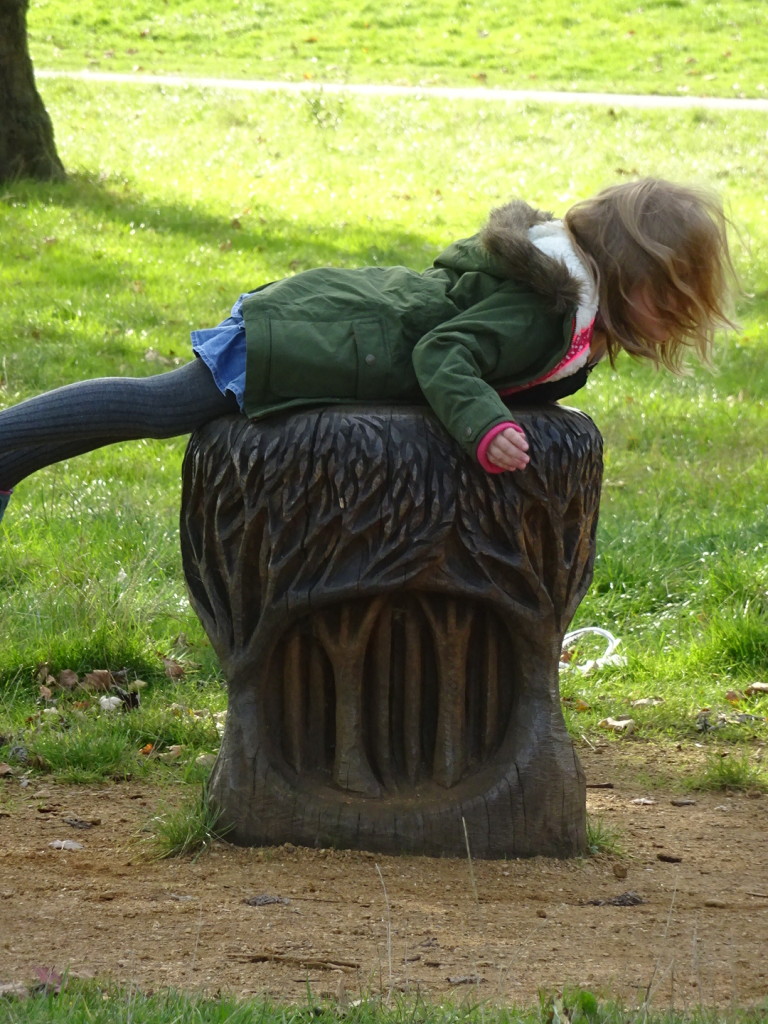 Fun sculpture tables and stools at the park on a sunny fall day (I think it was Regent’s, but it might have been Primrose Hill). Doesn’t get any better and this youngster knew it. 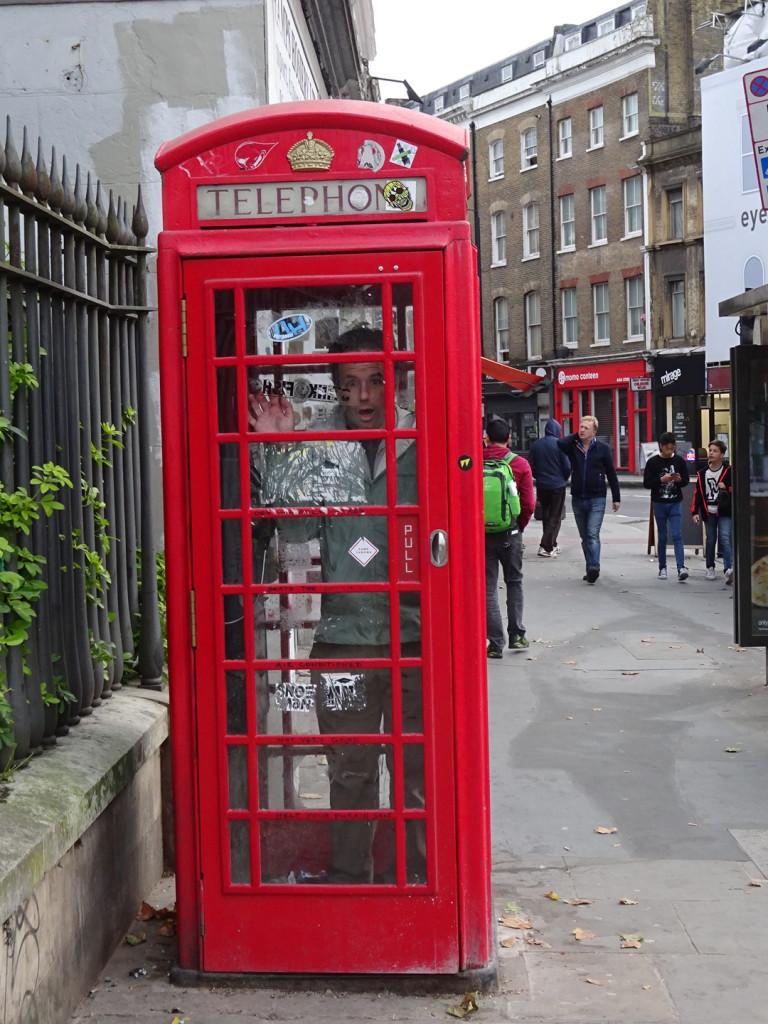 Right after Gideon told us the classic red phone booths were mostly used by prostitutes (for advertising – check for their cards above the phones!), Aaron jumped right in.

Gideon picked us up at the bus station, helped us navigate and learn the Underground – which I loved! Always a transportation junkie. We dined at several really fantastic neighborhood places, went to a neighborhood market, strolled through beautiful parks and saw the queen’s famed rose garden. Probably the biggest tourist highlight was going on the Alternative London street art walking tour Aaron blogged about. 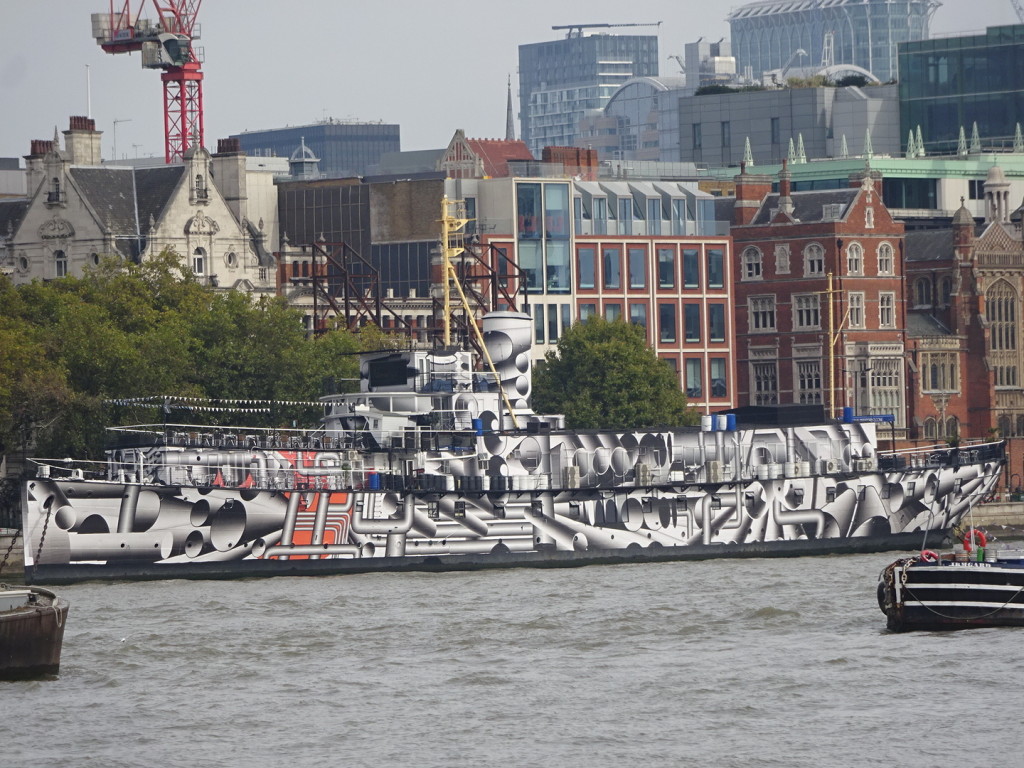 Gideon’s old office was actually on this boat! They’ve recently re-painted it inspired by a camo technique used in WWII. Crazy, eh? Fit right in with the street art we loved! 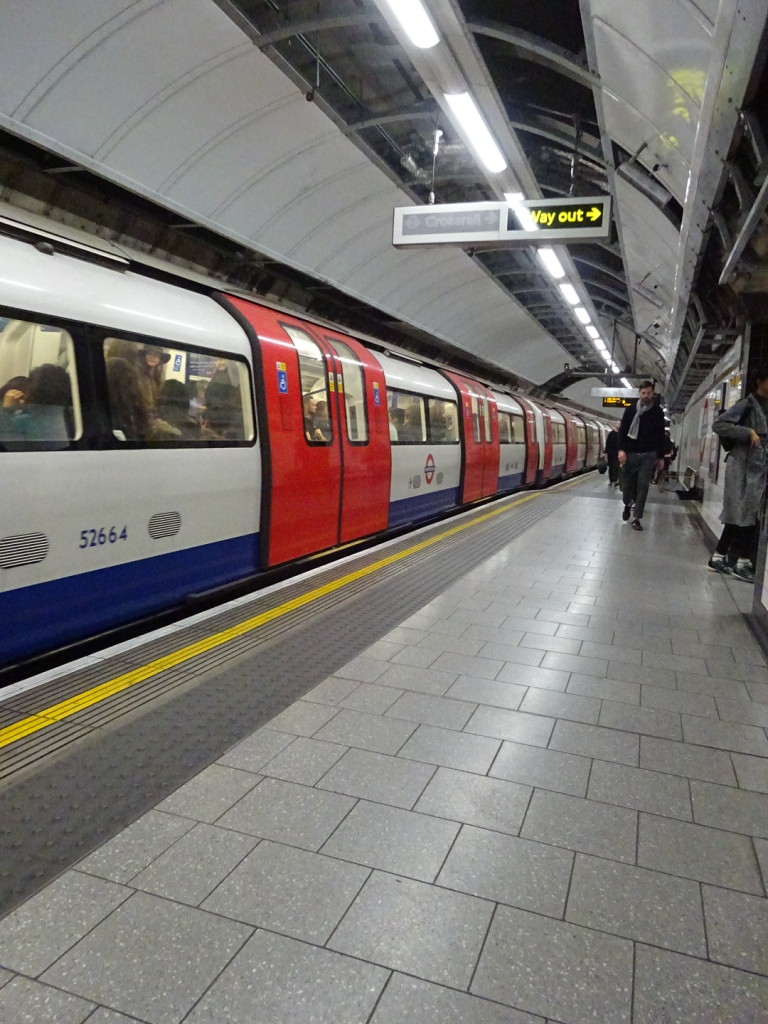 One of our many rides in the Tube. Mind The Gap! 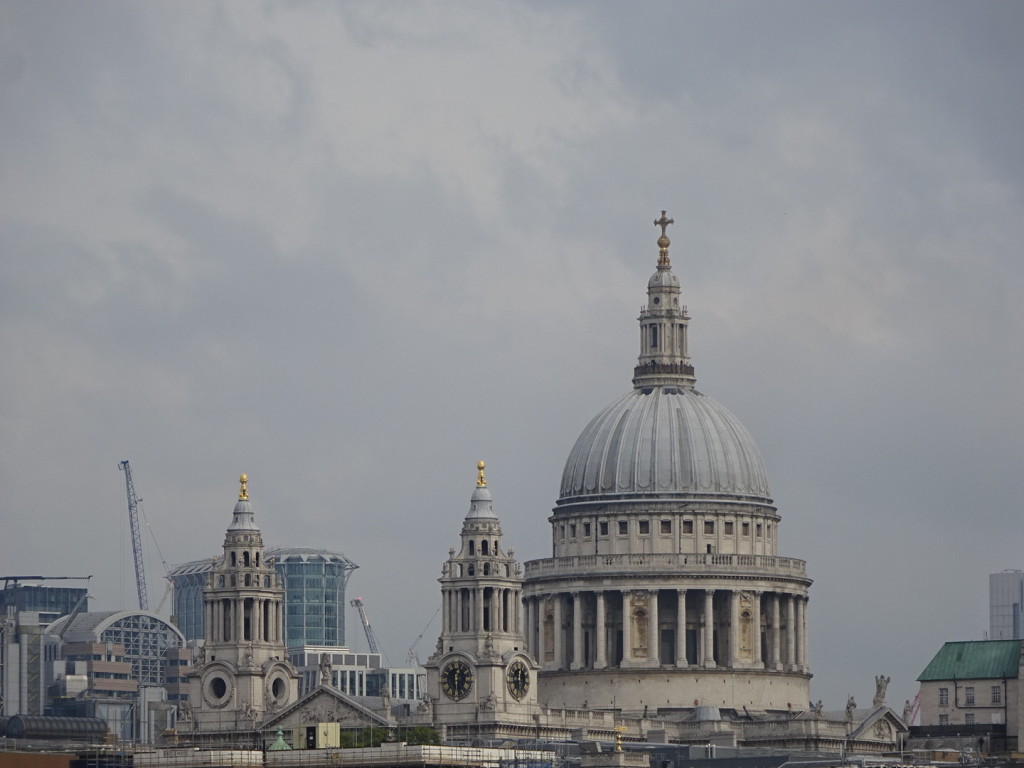 St. Paul’s – one of many a giant cathedral in this part of the world.

We had the chance to do a little walking excursion with Gideon that took us past the infamous Big Ben. Most people think it’s the clock tower that Aaron’s pointing to, but not so! Big Ben is the bell INSIDE the clock tower that rings on the hour. I think the clock part is actually called the Elizabeth Tower. It’s not totally clear why it’s called Big Ben. There were a few notable Ben’s and Benjiman’s at the time and no one is positive who it was named after. It was built in 1859 – which is really not that long ago considering how old London is. 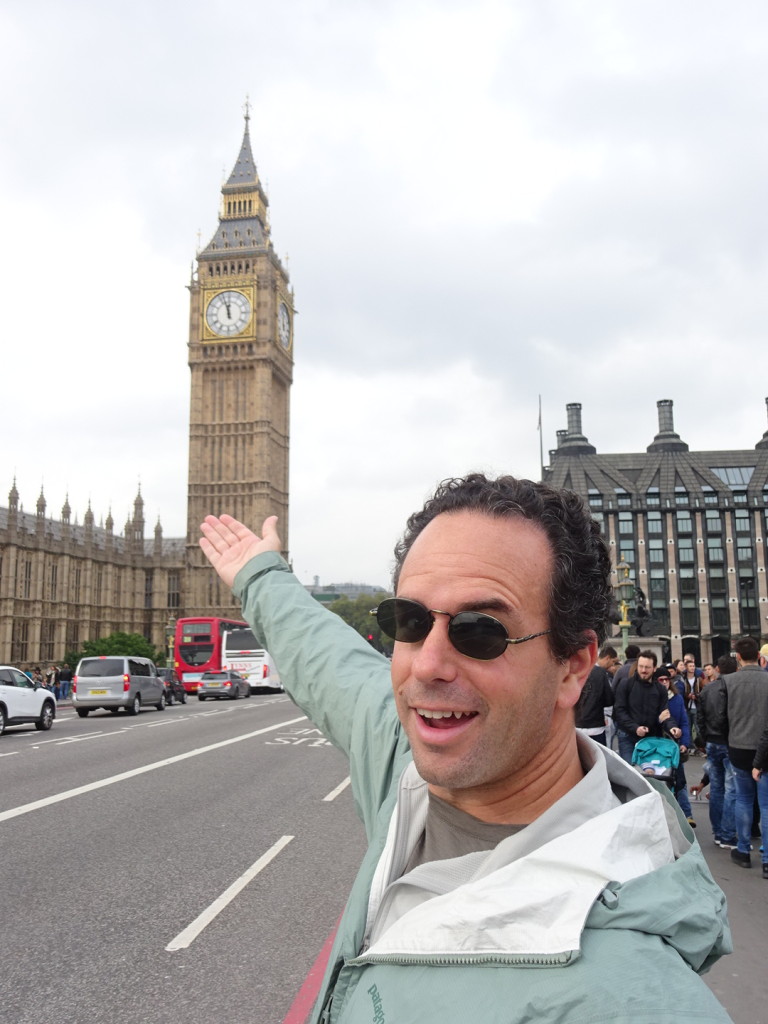 The clock tower is right next to Parliament Building and I think parts of that are quite ancient. The clock faces are huge, but not the biggest in the world. That honor goes to the clock tower in my very own hometown: Minneapolis City Hall. Another interesting note: Big Ben (the bell that is there now; there have been at least a couple of bells) was cast at the Whitechapel Bell Foundry which ALSO cast the Liberty Bell. 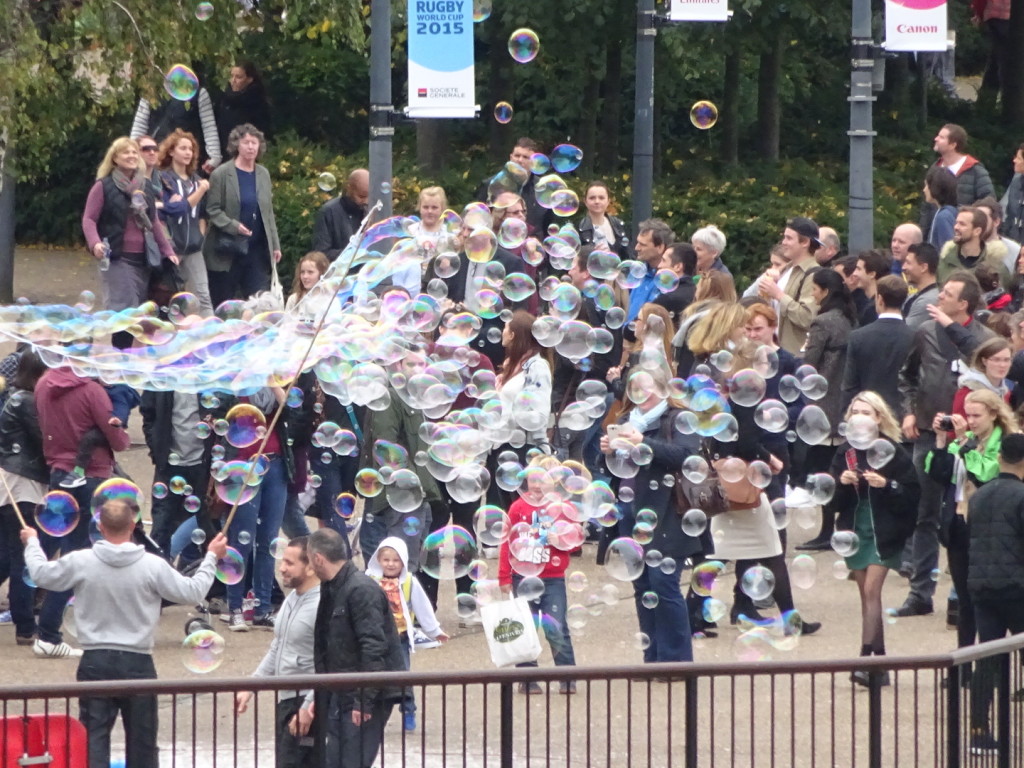 Bubbles! Everyone loves bubbles. On our walking excursion along the Thames. 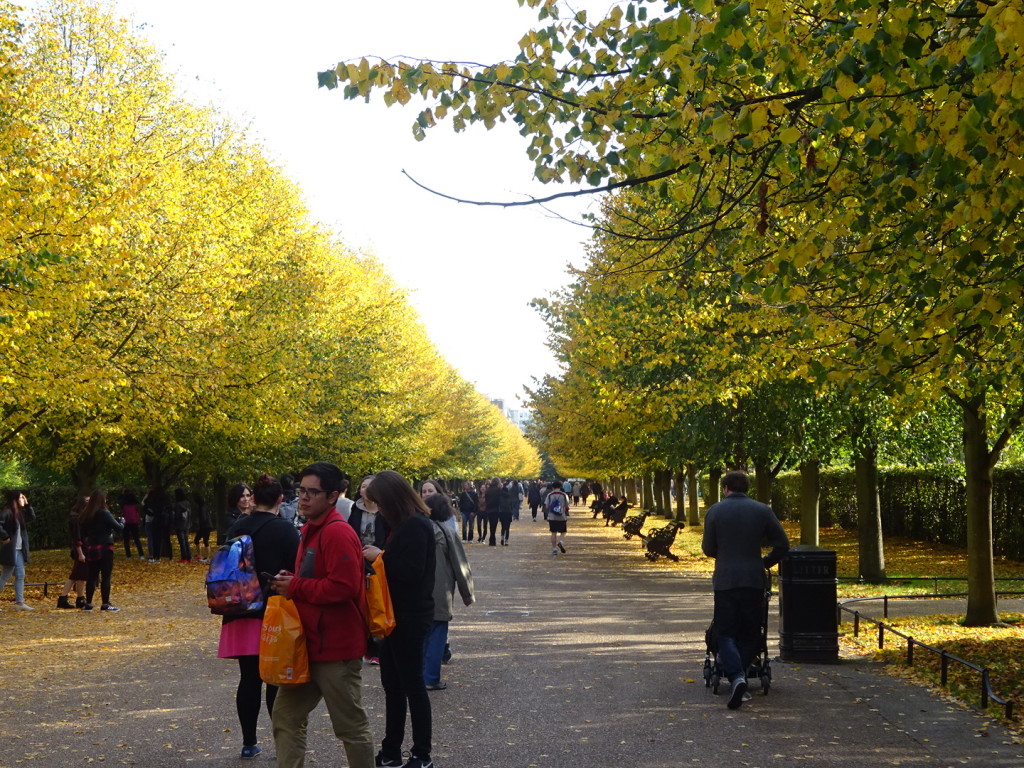 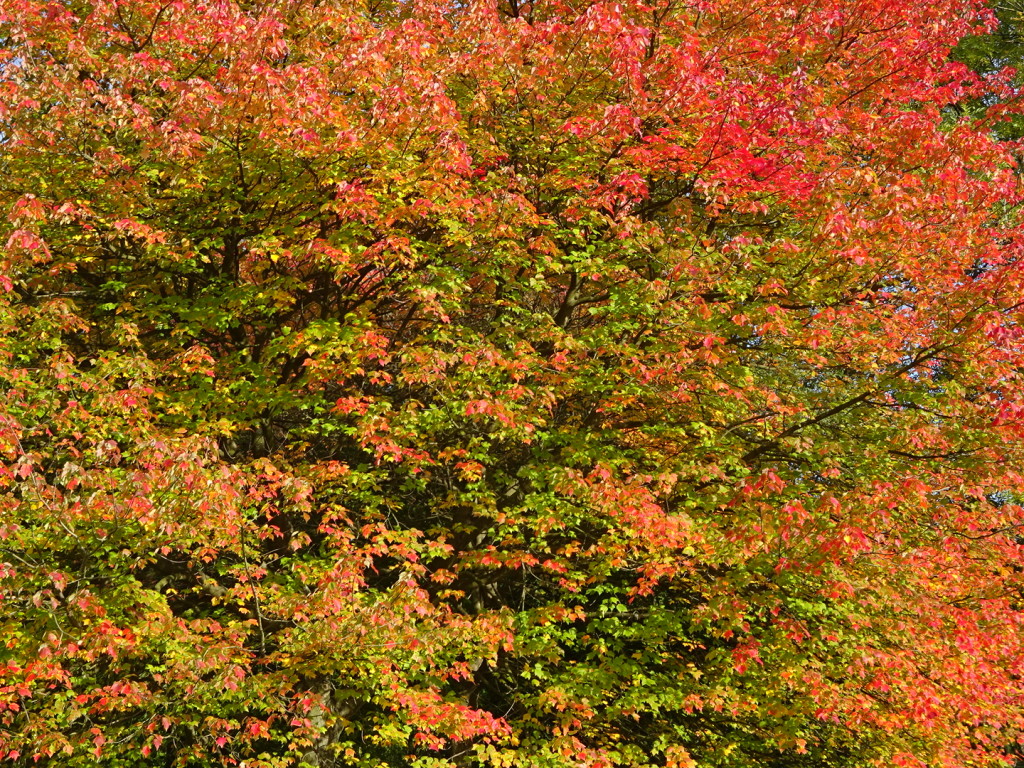 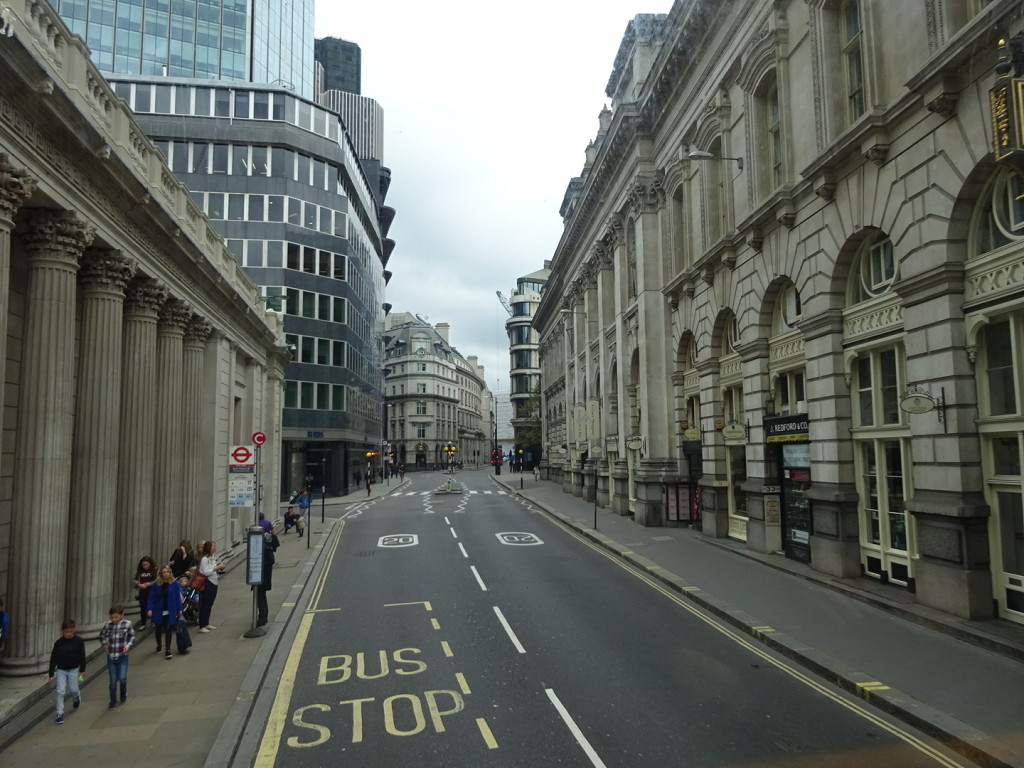 A fine London street as seen from the top deck of a classic double-decker bus! Don’t forget to drive on the left and, by golly, there’s you’re nearest Tube stop right up ahead.

During that excursion we happened upon the Gallery OXO that was hosting a show called A Letter In Mind. It was an exhibit where artists were invited to use an envelope of their choice as a starting point to create a piece about taking a journey. There were all sorts of media including pencils, painting, poetry and even fiber arts. As we walked through it I said, “Man, this would make a good fundraiser.” As we walked further references to the mind and the brain kept showing up, and I said, “What a good fundraiser possibility for the Seattle Brain Cancer Walk” (where Aaron and I volunteer). As we approached the final ‘letter’, we realized it WAS a fundraiser…for The National Hospital for Neurology and Neurosurgery. Ahhhhh, it all comes together. We talked to the proprietors and they were raising money to expand a ward for people with brain tumors and brain cancer. Kind of interesting how we stumbled upon a connection with something so dear to us back home. We enjoyed looking through the show and were thrilled to see many a red “sold” dot among the nearly 200 pieces. 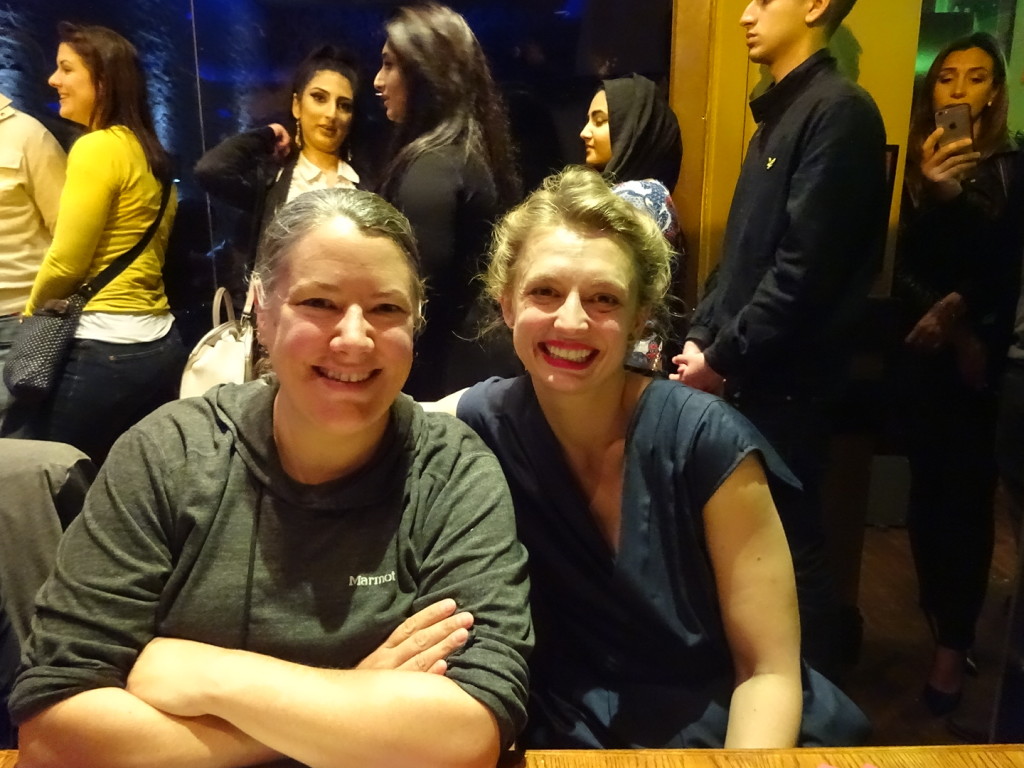 Anner and Necole. A reunion seven years in the making!

We had another reunion one evening, this time with one of my former co-workers, Necole. She was an amazing team member back at HDR and I loved working with her. Knowing she was an artist at heart, I knew her talents were being stifled on our engineering project and, much as I hated that she had to leave us, I completely understood. She headed to London and over the years has become an accomplished artist, now teaching metal casting at University! We started at an awesome little English pub where we had pints (love saying we had “pints at the pub“) and then off to a really incredibly delicous Indian restaraunt. I’m sure you can find bad food in England, but almost every meal we had was excellent. It was an easy night with conversation flowing between stories of folks Necole and I both know and the connections between Aaron’s and Necole’s art…so wonderful catching up after seven years! 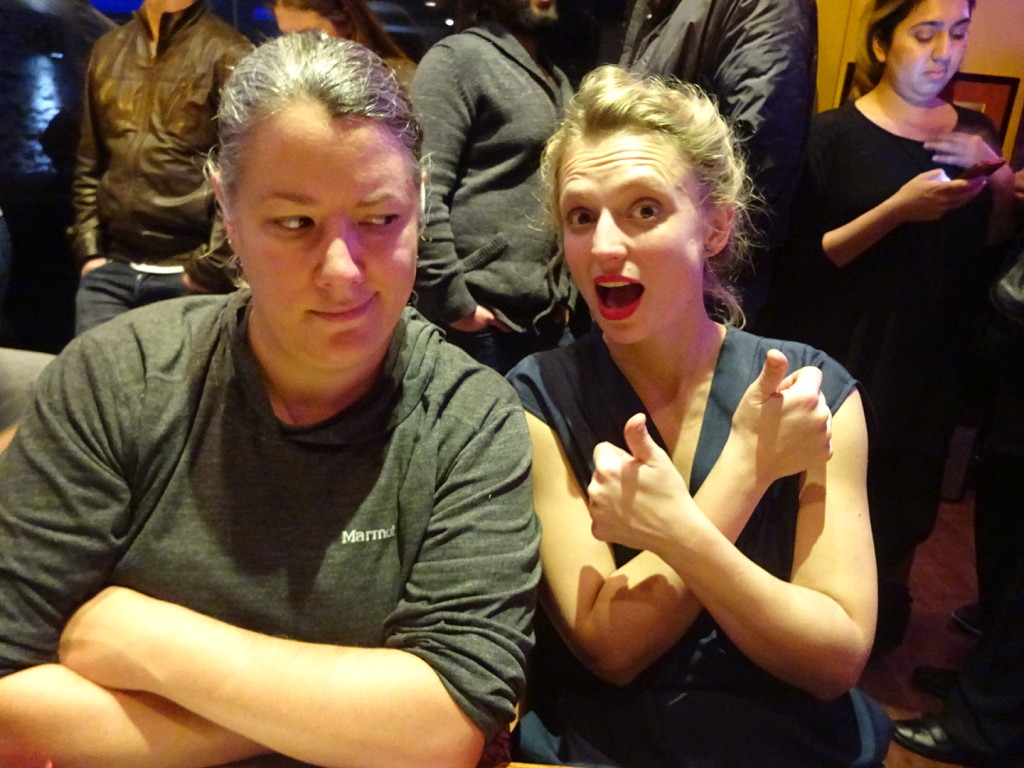 That’s what Aaron had to put up with all night. Lucky! 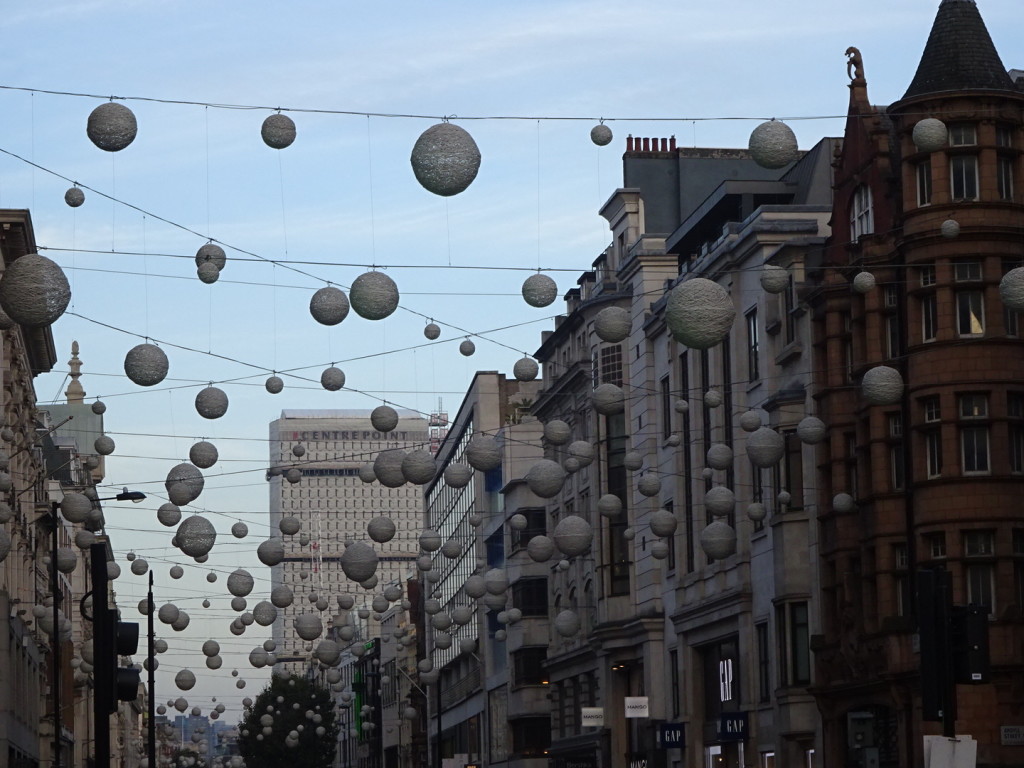 The streets were magical with the Chinese lantern lights glowing at night.

London once again showed us how it is to have locals show us around! Especially having so little time, they gave us a wonderful glimpse into London Life without spending an absolute fortune. More than that, it was a treat to get to know our cousins from across the pond and to reconnect with my old friend. We hope they will all let us reciprocate in Seattle someday. Thaaaaank You, Gideon & Karolina & Necole!! 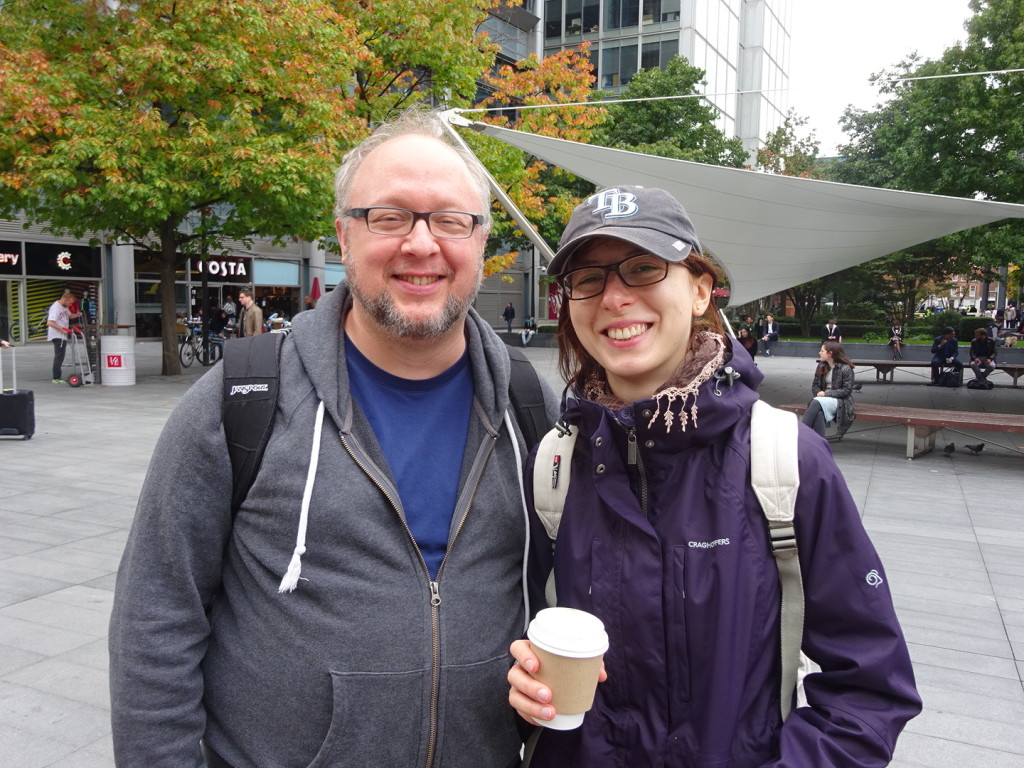 Our awesome hosts: Gideon and Karolina.