Just as you might have started to think we pulled this whole thing off with aplomb, I think we better come clean. 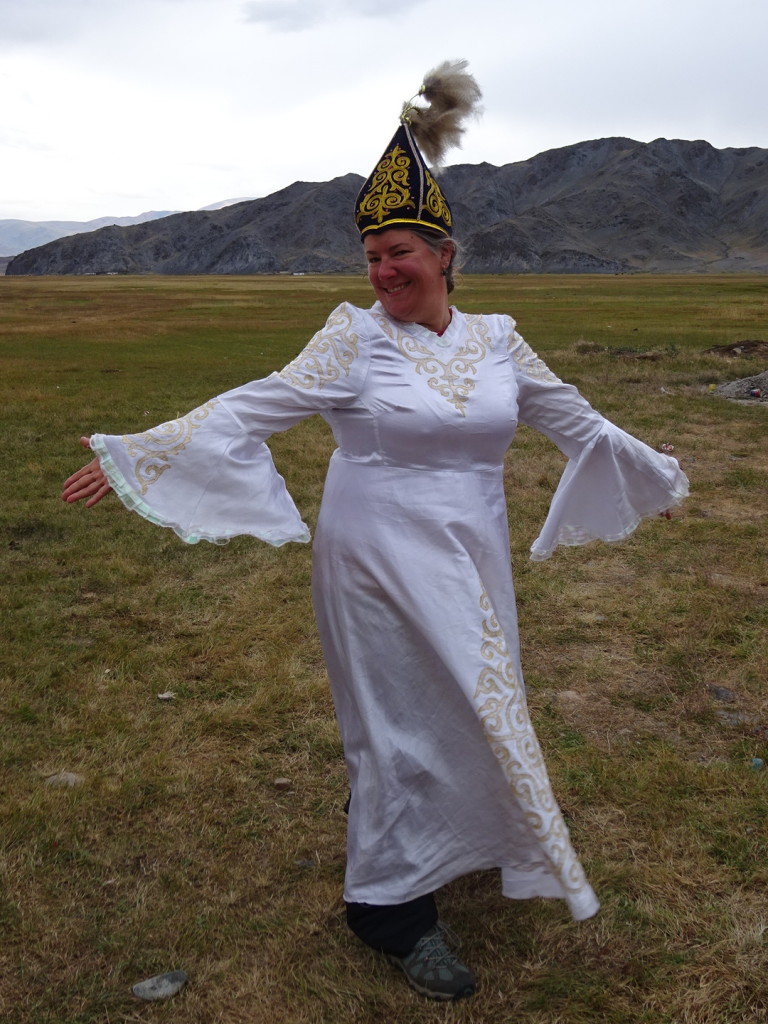 Note: My editor said that I was “ranting” and this blog was “unreadable” and that you, our readers, would not enjoy seeing my angry side. I suppose the one thing a blog should be is “readable,” sooooo here is a kinder-gentler version of some of the low points. You can go ahead and imagine them 10 times worse and you’ll be getting there.

It Wasn’t All Rainbows and Glitter. Not every second of the trek was fun and games. Aaron was sick at the beginning and wasn’t sleeping, but he hung in there and felt better a few days in  (thanks Chris and Bec for sleeping pills!). Using the bathroom was challenging without much in the way of fruits or veggies. We both had our near misses falling off the horses that we mentioned last blog.  Muscles were sore…regardless, we kept on going. But there were a lot of times, in spite of our perseverance, when it sucked – and not just the lunches. How so? I’m glad you asked!

I found the whole trek to be very mentally taxing. Trying to not die by horse was always on my mind, but the fluid logistics of the trek really threw me off. I normally handle those kinds of changes quite well, but when we’re told that we’ll walk the horses down the mountain for one hour, but really we end up spending nearly the entire day walking a horse up and down the mountain – that really sucks! 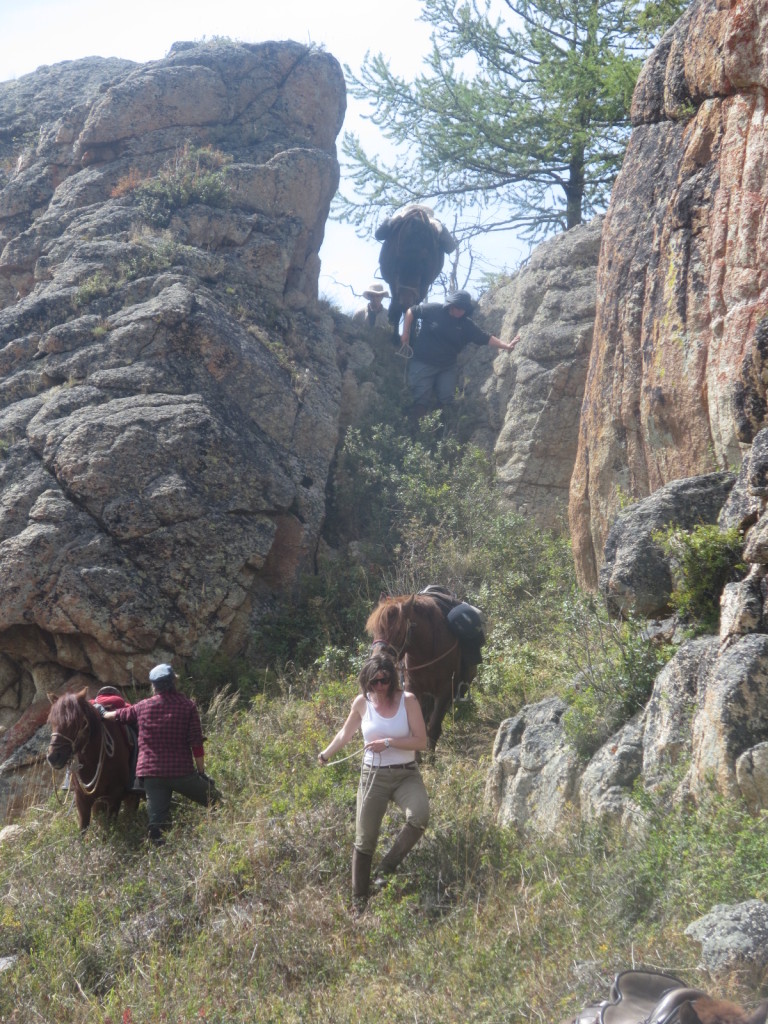 Things were going downhill in a hurry!  First of all…see? No riding! (thank you to our trek-mate, Tyler, for this pic)

Or learning that one ride was just going in a circle for no reason when they originally said we’d ride and meet our support vehicles. Hated that ‘tell me one thing but actually do another’ side of things. I could give a lot of examples of this kind of angst, but that would be “ranting” so moving on… 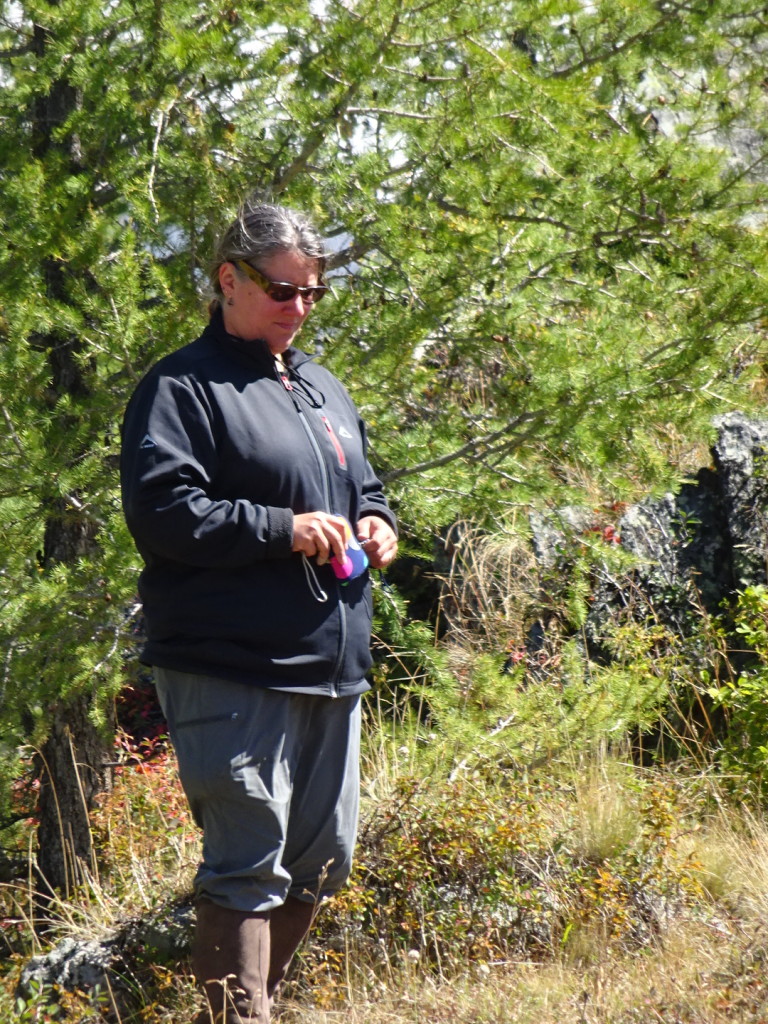 You probably can’t tell that hiking up and down a mountain through all these trees and through a stream wasn’t a happy experience for me. I hide it so well, don’t you think?

How about a little story of when things went from their worst towards their best? That’d be good, right? My editor approves, so here we go…

The evening of our mountain hike day, about 2/3 through the trek, we started discussing the Pass of Death, which I think is sort of the apex of the trip. Yes, it’s truly called the Pass of Death. That’s due to the straight down descent that, thankfully, it used to require. I asked how it compared to the mountain hiking we’d done that day and our translator said “the same.” I can only imagine he didn’t understand my question, but at that point my nerves were fried and it was just too much. I had hated, hated, hated the hike day and now I was hearing we were going to have more of the same coming up? Exhausted and scared, I went back to my tent, put my head on my pillow and tried to count all the good things about the trip, but my brain kept going back to hating every second of it and never wanting to see Mongolia again. Not totally rational, but that’s how I felt in that moment. Aaron came to check on me. All I could whimper was that I hated it and I wanted to go home. Home home. Not just Bali, our next stop, but get-me-the-hell-out-of-here-I-want-to-be-back-in-my-real-home home. He rubbed my back and leaned over and said he would sit with me in the transport support van and we could skip riding over the Pass of Death. *sigh* This was a very low day. (This is where you should imagine it MUCH wort than this sugar-coated version.) 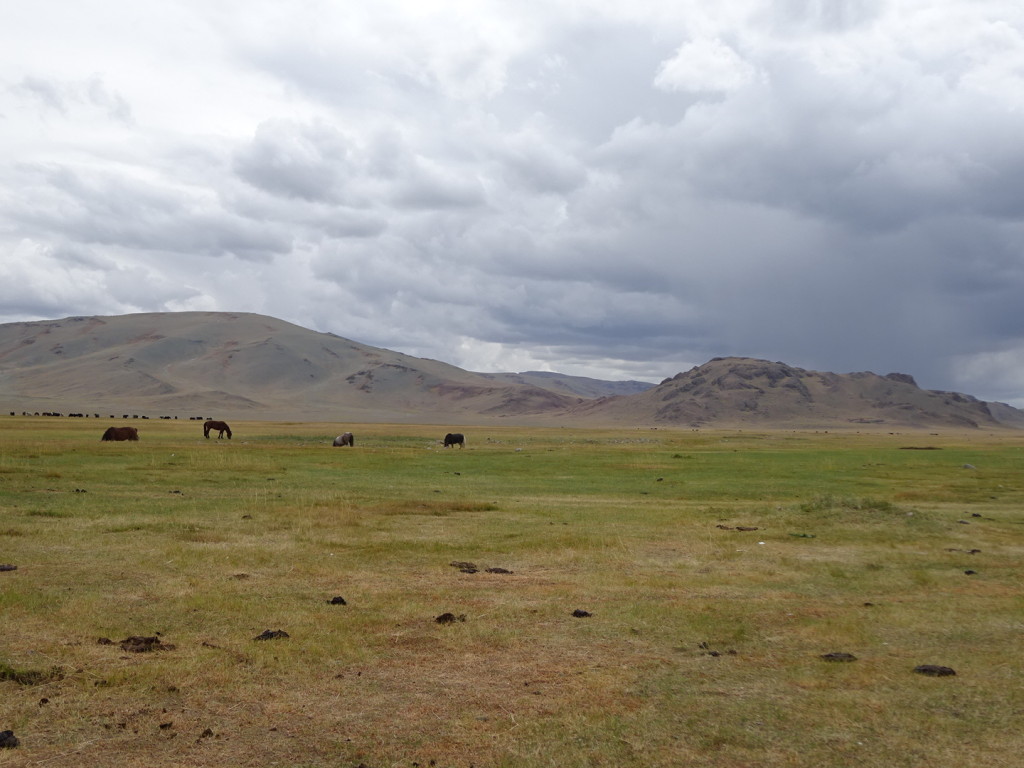 Storm clouds were gathering in my head. No fun.

The next morning Jen, our fabulously badass leader stopped by our tent. I asked her again if the Pass of Death would be as bad as the previous day’s hike. We talked it through and the translator brought some pictures so I could see it. From the photos it didn’t look bad at all so I decided to try. You just don’t know how much grit you have until you wake up in the morning after an exhausting hike and decide to give things one more try. Aaron and I have a motto – better to regret the things you do than regret things you didn’t try at all. Jen renamed the trail to the Pass of Sunshine, in an effort to improve my mental attitude. It actually helped! (Here’s to positive pschology!) Many of our fellow trekkers started calling it Sunshine, too! If we haven’t mentioned it enough yet, Jen was absolutely incredible.

The Pass of Sunshine was a two day ride away. Riding to our remote camp on the first day was no big deal. Easy schmeasy, in fact – a mere 4ish hours! That’s just how far we had come in our horse education. Four hours was no big deal, at least with no mountains involved. Then the big day: the Pass of Sunshine. It was cold with big, crazy, dark, bubbly clouds rolling in. This was the day Max’s horse freaked out at the exact moment we were all in the saddle and his horse bucked through the herd freaking out everyone else’s horses. Nobody hurt, but a scary start to what I expected to be a scary day.

We rode up, up, and up. The terrain seemed really rather mundane and boring, at least compared to the other places we had ridden on the trip. Yawn. Then we crested. Holy Mackerel! It was absolutely spectacular!! The whole trip was worth it for that one view. Huge, heavy clouds poured over the jagged mountain tops and a rainbow of reds and browns painted the rocks. Don’t see that everyday! We looked for the Pass of Sunshine, but all we could find was a path headed straight down which sure didn’t look passable to any of us! I hoped, hoped, hoped we weren’t walking down that path, but I now understood why it was called the Pass of Death.

On top of the world at the crest of the Pass of Death! (Click to see a big version of the pic.) 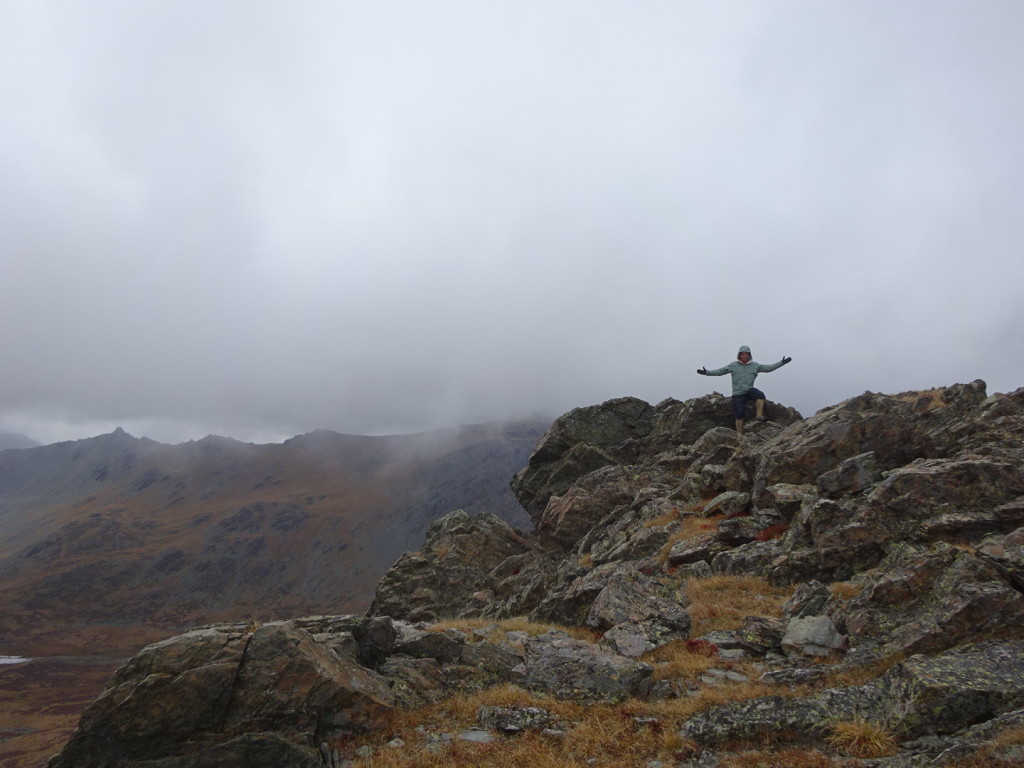 Aaron at the crest.

The wranglers said “kettik” and we gathered ourselves. Smokey Joe handed my horse to Saraa, our main cook, and motioned for me to start walking. We walked away from the precipitous drop to a very short hike up to the top – maybe 15 minutes – and the Pass was reached! Now, time for switch backs down. SWITCH BACKS! We hadn’t seen a trail in 10+ days and now, now on the Pass of Sunshine, we had a trail!! How great is that!? The wrangler knew that I had a tough time hiking the mountain leading Trusty, so he unilaterally decided that I’d just walk alone. Our fellow trekker Lisa, from London, has some bad ankles so together we walked ourselves down the mountain without the gentle, relentless nudge of my horse’s nose in my back. So nice. 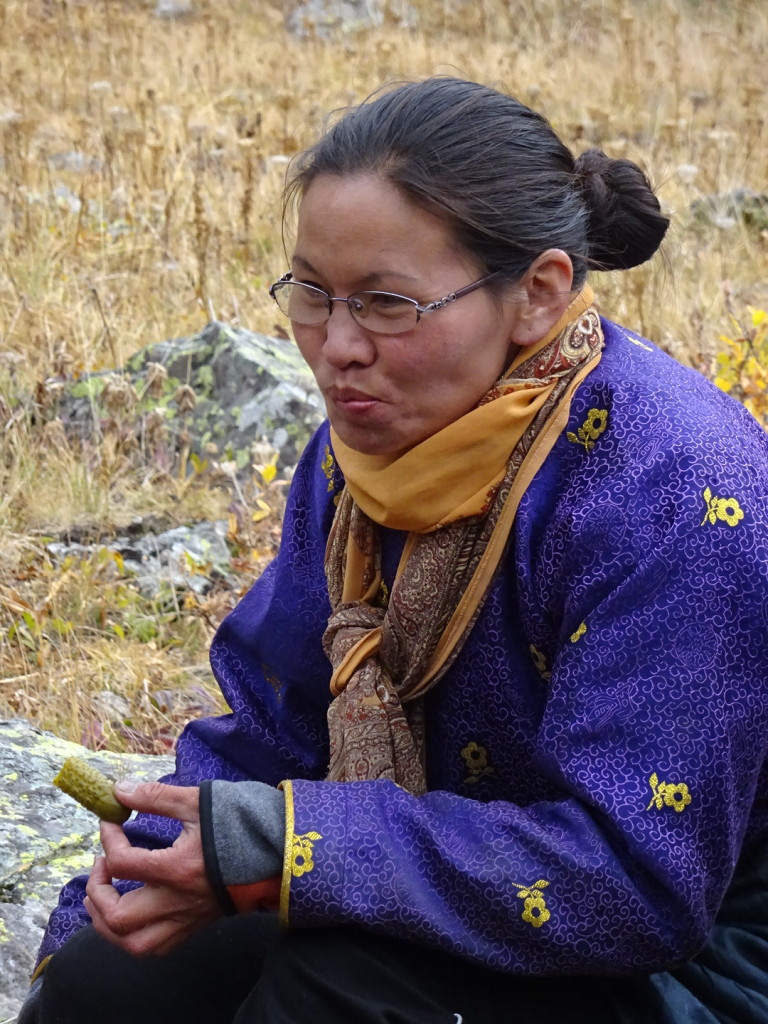 Saraa, our cook, snacking on everybody’s favorite lunch pickles before leading Trusty down the Pass of Death. 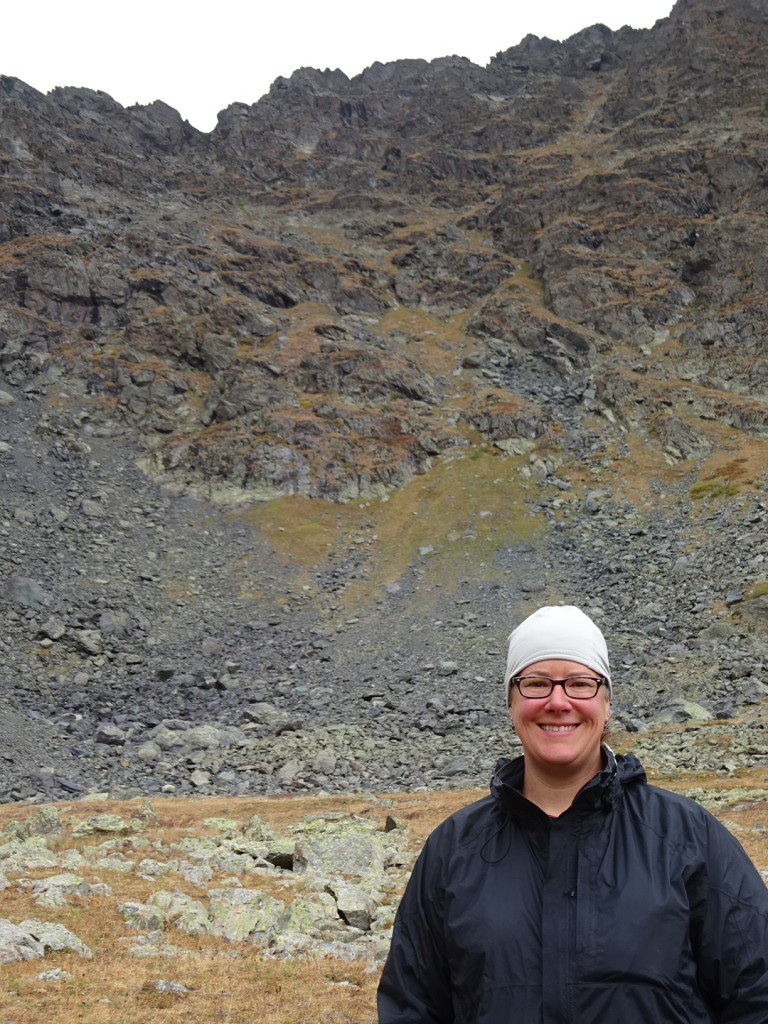 Pass of Death? It ain’t got nothin’ on me!

Aaron took a video that gives you an idea of how far and steep the pass is. Truly, though, the Pass of Sunshine was easy. You hear that! EASY! Nothing to worry about. It was then I realized that our hard days were over. From that point on the riding was no longer terrorizing me. For the first time, the trek started to be fun. Thank you deep well of resilience! 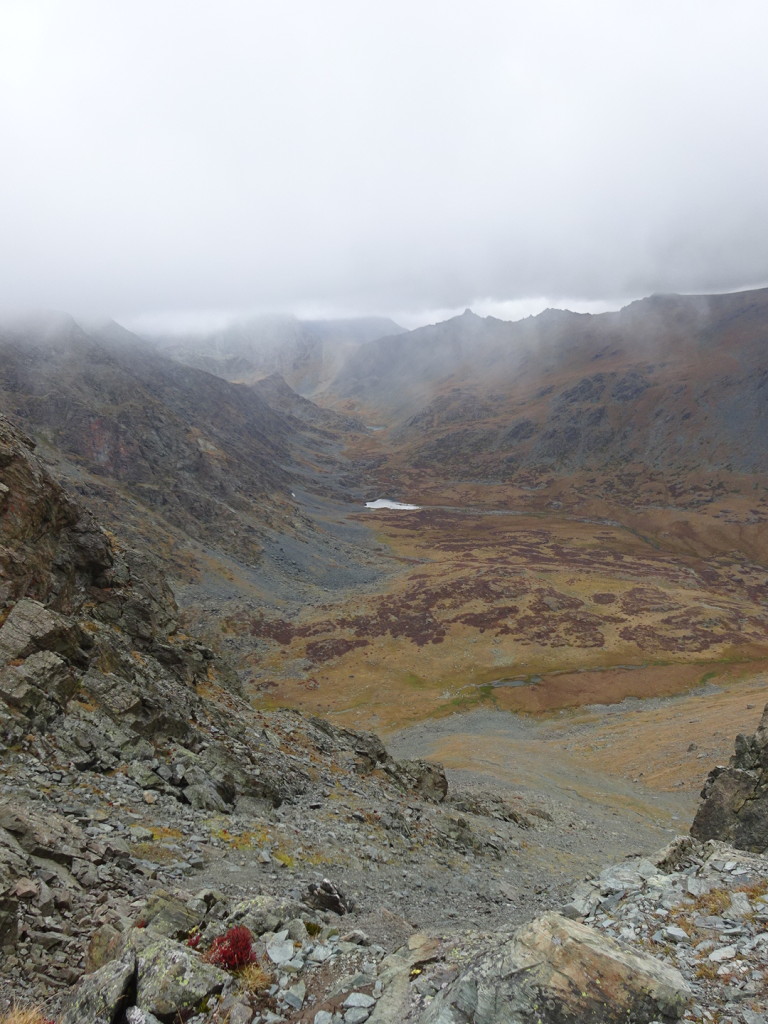 The Pass of Death turned out to not be so bad after all. May it evermore be known as the Pass of Sunshine!

Would We Do It Again? So Bec, now that it’s over, would I do it again? I think I’m with Aaron – maybe…. Actually, for me, well, yes! At the good-bye dinner in Ulaanbataar we heard about other horse treks including one in Ethiopia. Suddenly my mind started to race. Wonder how hard it is? I bet that would be really freaking awesome! Maybe I could bring more lunch snacks. Not even a day after the hard trek came to an end and I was already thinking about the next one. Am I glad I did it? Hell yeah!!! I’m a badass backcountry Mongolian horse trekker! 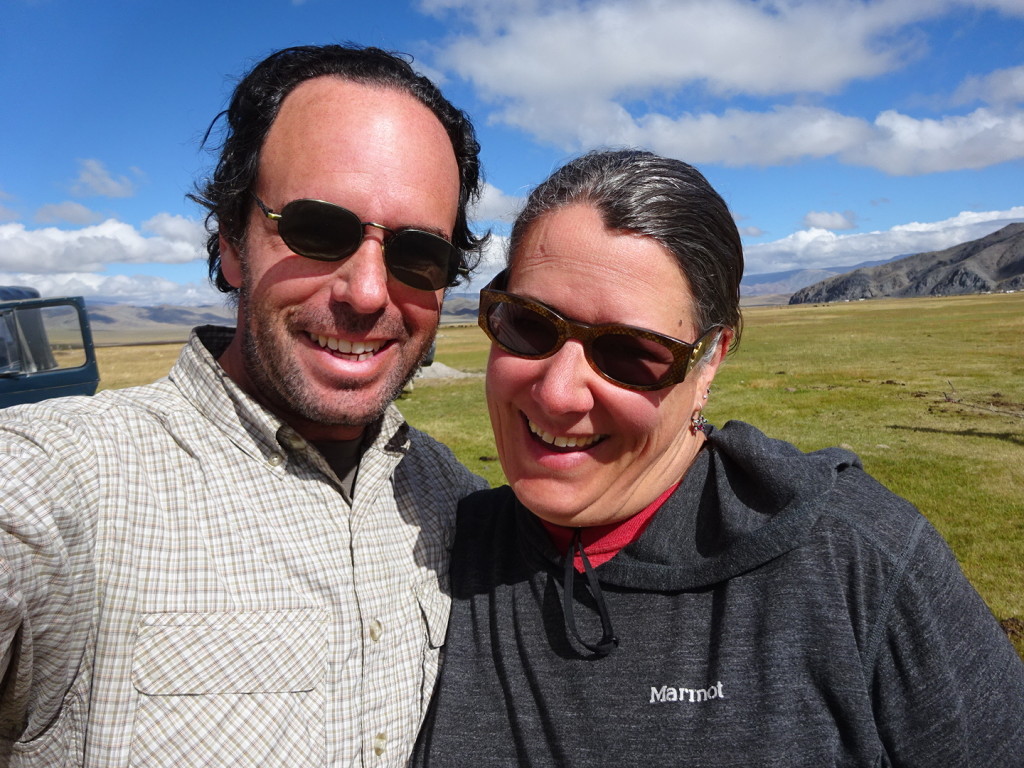 A couple of hardcore horse-trekking vets feeling like they’ve done their bit of conquering Mongolia!

If you missed them, here are our other blogs on Mongolia:

« The Nicest Badasses You’ll Ever Meet
Photo Tour: Inside the Khazak-Mongolian Ger »