The Nicest Badasses You’ll Ever Meet

The Most Awesome People in the World The Khazak Mongolians that we spent our trip with were every bit as kind and generous as you’ve seen on TV. They will re-fill your yak tea long before you need more. When we arrived at a ger, there was always a humongous spread of dried yogurt, cheese, fresh yak butter, fried dough, maybe cream and you were expected to dig in! And if you fall asleep in that steamy, warm ger, they will put a pillow under your head and a blanket over you. 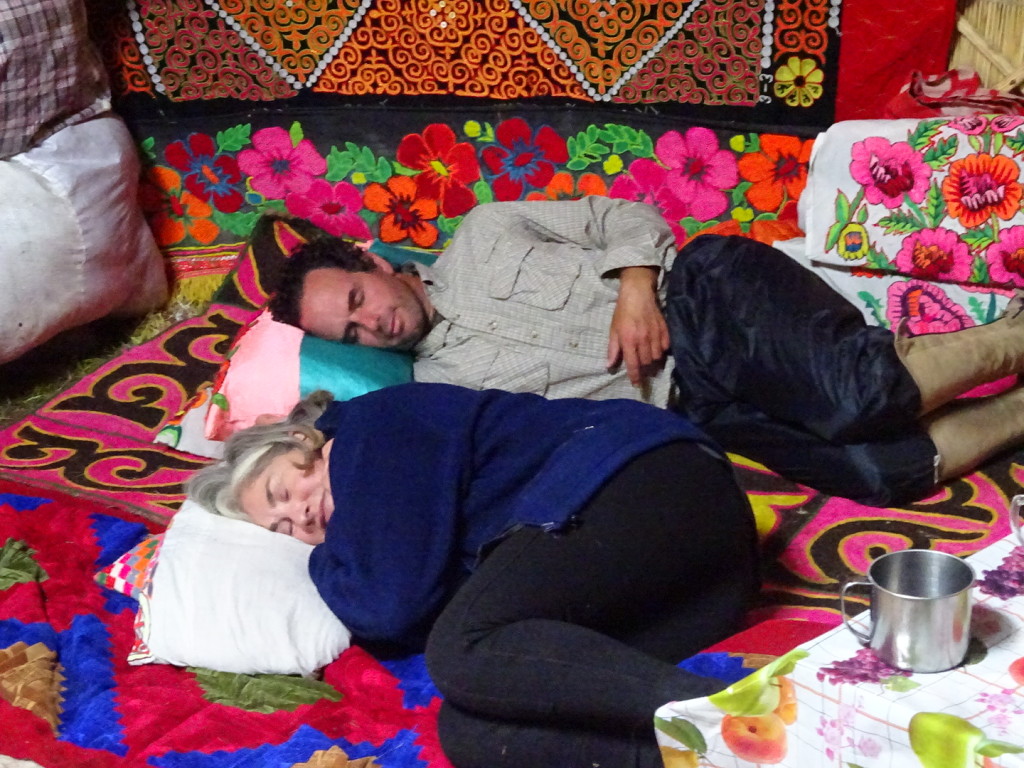 Aaron and Lisa fall fast asleep in the ger. Apparently gers are very communal and it’s common to just enter a friend’s ger and lie down for a nap. Not exactly the way our US homes do things, eh? Kind of wish they did sometimes!

The Khazaks laughed and fooled around together. We couldn’t understand the language, but there was always a lot of joking around – they have a fabulous sense of humor. Bottles of whiskey and vodka would make their way around the camp fire – I thank the old Soviet influence for such things. Khatran liked to walk around tent to tent to see what each of us were doing. Try on our clothes. Test out our electronics. They LOVE technology! They know how to work every phone, camera and tablet. A few Khazak women sat down and looked at pictures of Aaron’s jewelry on our tablet. Sliding their fingers across the screen to see the next photo – oooohing and aaaahing the whole way. You just wouldn’t expect it from their primitive life style, but pretty cool, eh?

We noticed that boys and men were always hanging onto each other, talking and laughing. Wonder if it’s related to needing those physical connections to stay warm in the winters? Or perhaps in response to the cold, austere landscape? So much still to learn… 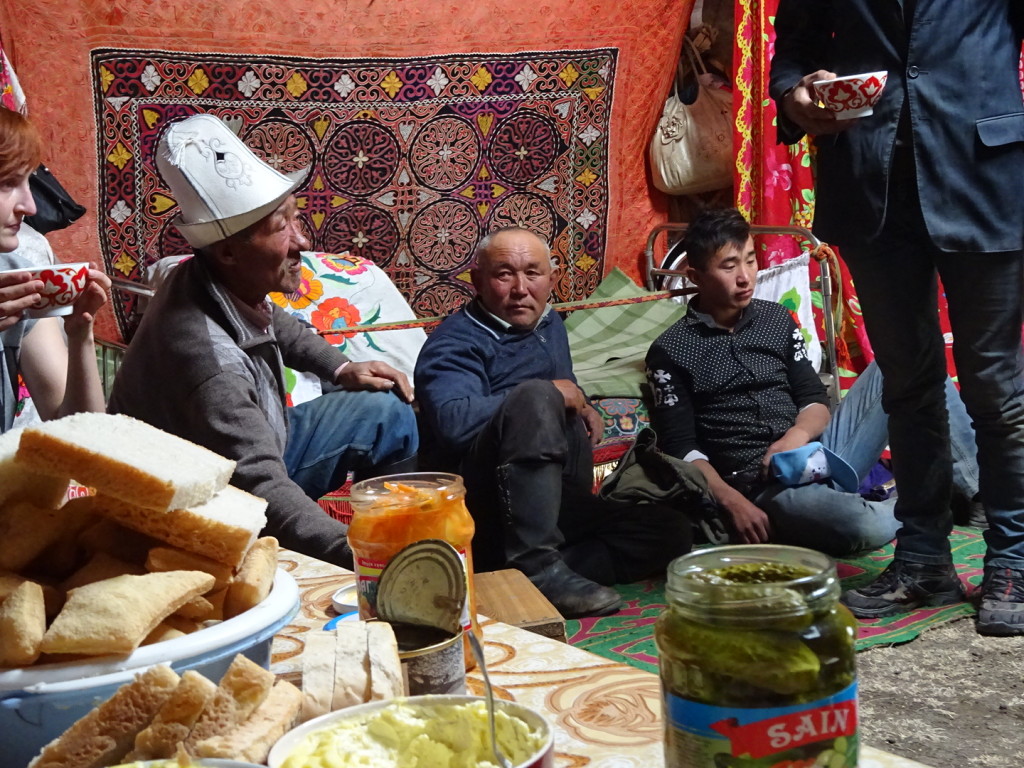 Just hanging out inside the ger. Most everyone lies or sits on the ground. Note the pickles right up front, along with the open can of sardines!

Unlike so many places we’ve been, Mongolia seems to be a place where men and women both work very hard. In my opinion, most countries we’ve seen women work hard…men do the least they can get away with. Here the men were doing everything for the horses, bringing in firewood, gathering dried dung for cooking fires and helping with the animals when needed. The women did all the cooking, organized the gers (everyone helped with setting them up and taking them down when it was time to move), milking the yaks and sewing. Busy, busy! 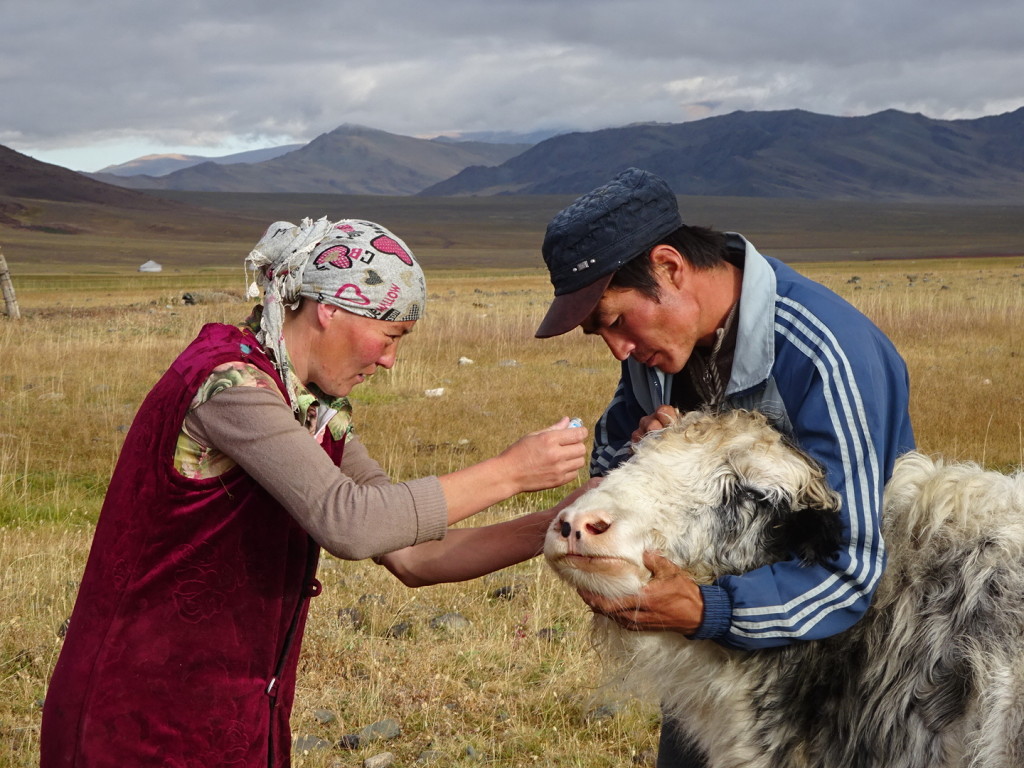 Everyone helps a yak with eye problems!

Inkarbek takes the kids out to the horses.

Inkarbek was really fun and outgoing. Aaron brought out his Ultimate Frisbee disc on the first day and Inkarbek instantly gestured to toss it to him. Aaron and him played all afternoon, often trying to get the little girls to join in, but no luck. Then Inkarbek disappeared from the trek – he was taking his entrance exam for University. A week later he reappeared and we learned he had passed and is on his way to University. Huge congratulations!!! The entire trek erupted into a cheer and applause. On our last day, Aaron gave him the disc. You just can’t go to college without one! 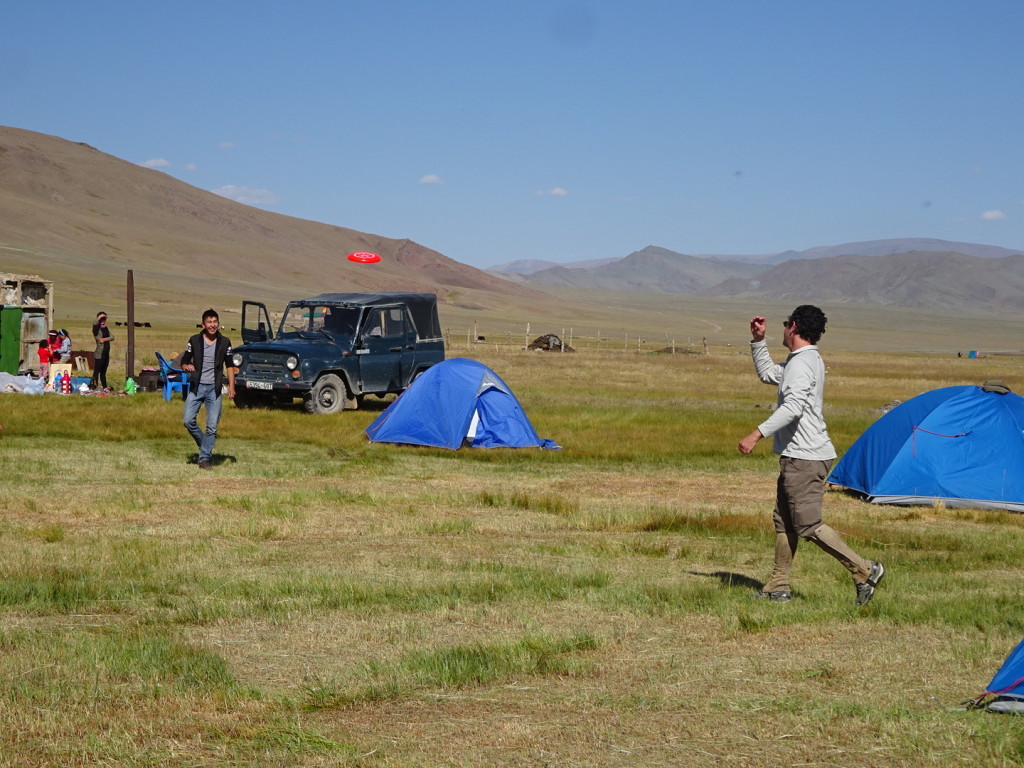 A bit of disc on the Mongolian steppe.

She wouldn’t play on the first day, but once Aaron gave the disc to Inkarbek, we did see her trying it out with her littler sisters.

That is something else I loved about Mongolia – kids actually go to school and families seems to be pretty interested in having their kids attend. This is a rather new development in Mongolia. Even the nomadic kids go to town and live with friends or family or in a dorm during the school year and then return to the family ger during vacation time. 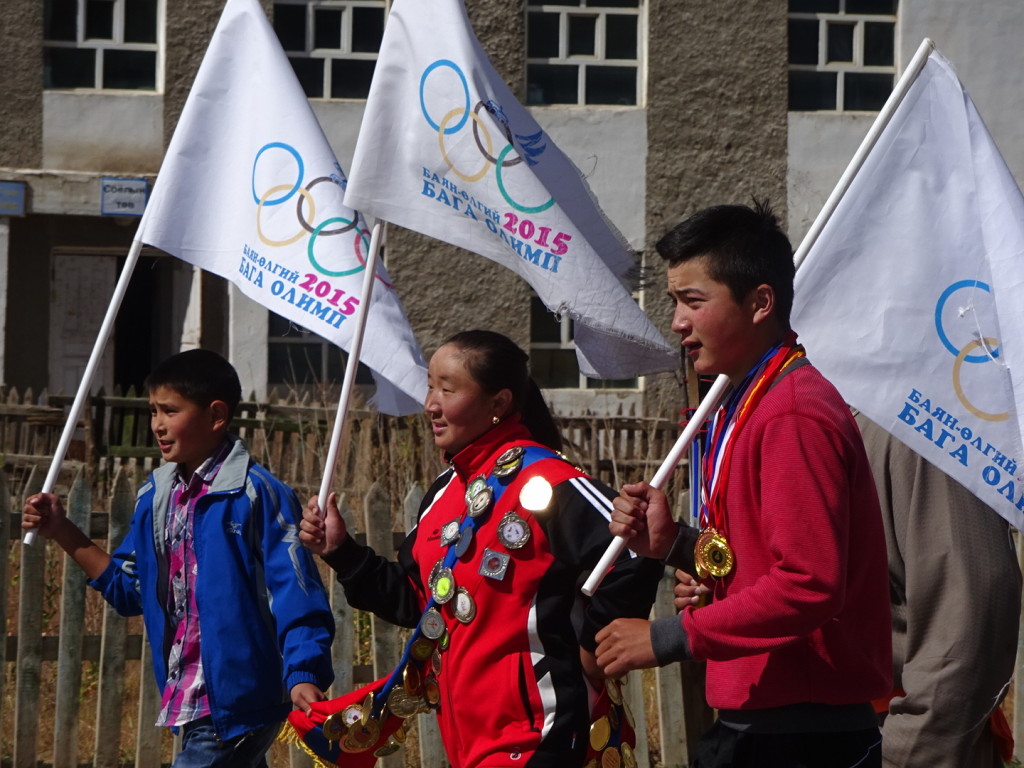 Opening ceremony for the start of school in the town of Altai.

The Khazak women in our camp were especially endearing. They made sure to give all of us ladies a personal gift before we left. Amangul, the manager, gave me her Khazak vest. It was cold one day so she took it off and put it on me. Gotta say – it was warm and fit just about perfect. I tried to return it to her, but it kept showing up in my stuff. Finally in broken English she said, “Me – You” and gestured she was giving it to me. She also went on to use pantomime and broken English to tell me how she used to be as big as me and that’s why it fits me so well, but she’s taken to running up and down the Mongolian hills and lost weight – and man her clothes don’t fit right anymore, so I should have it. That, my friends, is how I acquired the great Mongolian badass weight loss vest. Can’t wait to try it out! 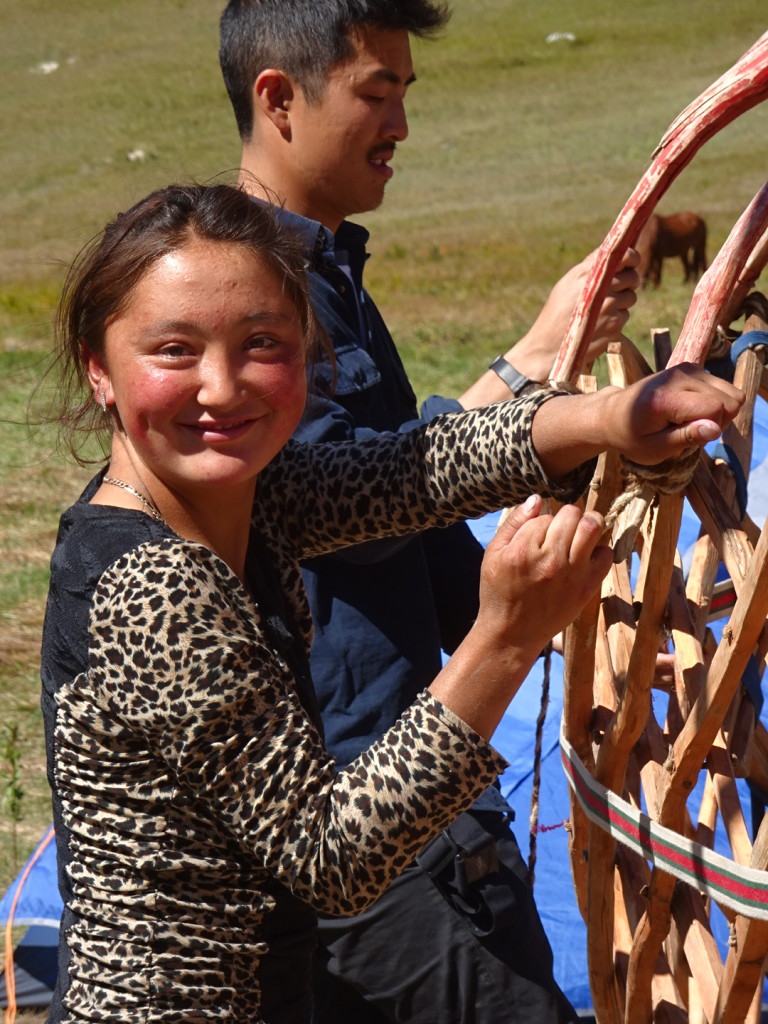 One of our cooks, Aimgul, helping set up our ger. She celebrated her 20th birthday with us all!

We had the most amazing time with the people. Aaron got a special yak hair rope-braiding lesson (blog to come), we were welcomed into their gers and treated like family. Really, as far as I was concerned, the riding was a means to get to meet these wonderful people in an authentic way that was so unique. Though there were times I wished we had an easier trek, it was always worth it to be with the Khazaks in their homes. Special indeed.

Everyone is family once you enter the ger! (You might want to click on pic to see a larger version.)

Eagle Hunters! On one of our rides out in the back country, our local wranglers took us to meet two Khazak Golden Eagle Hunters. I had never even heard of eagle hunting before, but good news, you don’t hunt eagles in eagle hunting! Golden eagles are trained to hunt for the Khazaks. The eagle sees the prey from high in the sky, dives down and holds it in its claws, the eagle hunter hikes out and then kills the prey. The eagle gets the tongue of the prey as it’s reward – considered the finest piece of meat…or that’s what they told us. The hunter takes the prey home for dinner. Amazing, huh? 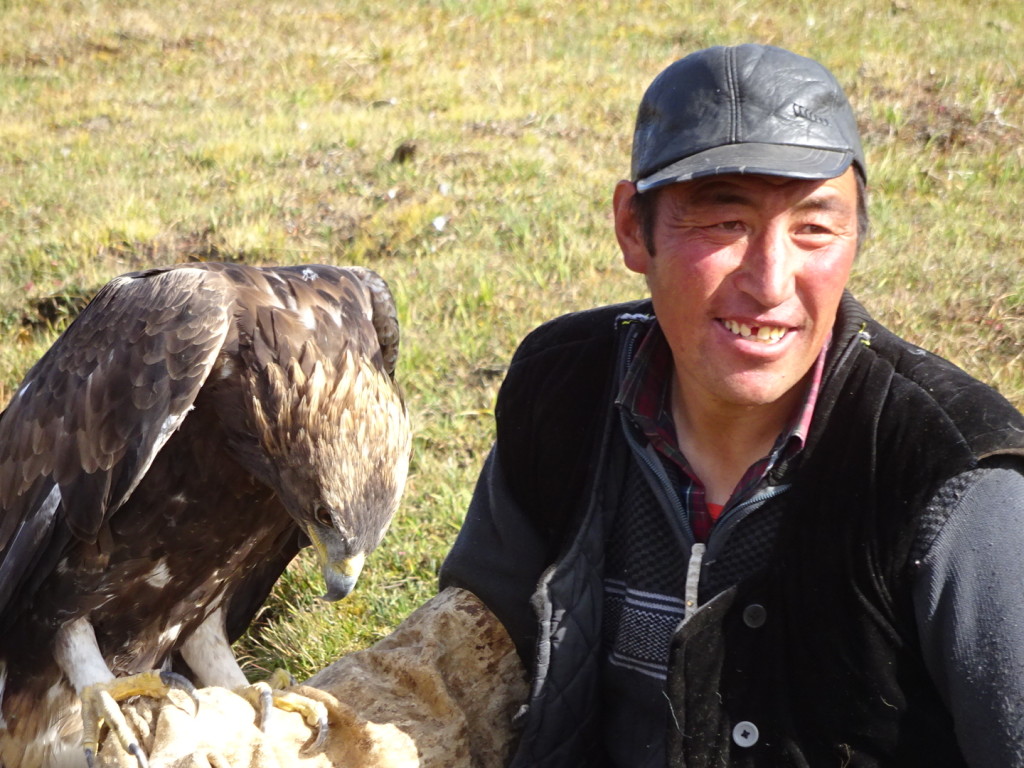 Such amazing love and respect these hunters had for their birds. 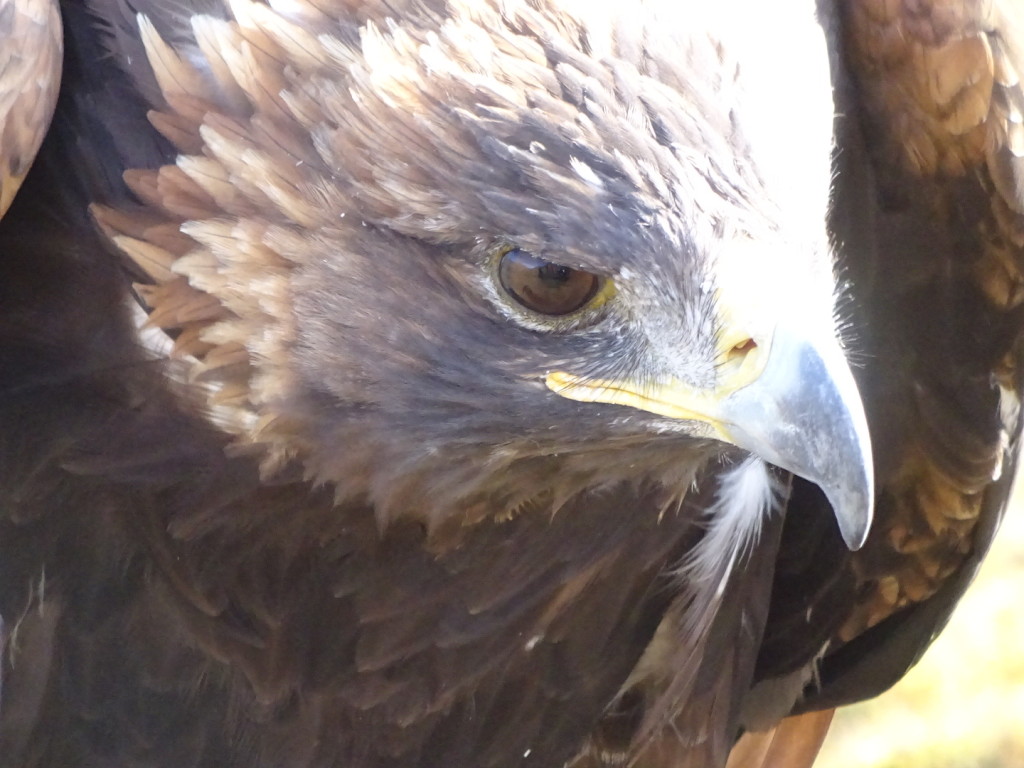 Golden Eagles were giant! And gorgeous!

It starts every 8-10 years or so in the spring when the eagle hunter has to steal an eagle chick. Just think about that: they have to climb the highest mountain and get to the highest, most remote place to even find the eagle nest and THEN they steal a female eaglet. Only females, as they are bigger and more trainable. It was crazy seeing how big those golden eagles were compared to the steppe eagles we saw soaring over camp every day. The hunters take their eagle home and raise it, tying it to a rock so it can’t fly away. Apparently, within a few months they can train the eagle to trap prey. The eagles only hunt for a month or two each year in late fall (I think) so that they don’t get so exhausted and thin that they can’t survive the winters! Eagles are kept for about eight years and then sent back to the wild to live and reproduce. We all had a chance to hold one of their three eagle, which was pretty darn cool. Interesting aside – we saw the eagle hunter in town a few days later. He was taking his kids to the first day of school.

One of the hunters holding the smallest of their three eagles.

Why yes, that IS a golden eagle on my wrist, why do you ask?

Aaron went for making his eagle fly. Pretty cool… until it decided to jump off his wrist and start falling since he couldn’t see where he was leaping! And he was tethered, of course.

Yak’s Milk We got to observe yak milking. Quite a process if you haven’t seen it. Twice a day the women and girls go out a-milking. Baby yaks are tied together with yak hair ropes just like the rope Aaron made (that will be blogged about soon) while the mama yaks are nearby waiting. One-by-one they let the baby yaks loose to run to their moms and start nursing which “drops the milk”. Then the women grab the baby yak by the neck hair and tail and haul them back to the rope and tie them up. With the milk waiting, the women squat down on a tiny stool, hold a pail between their legs and proceed to milk the yak. Insider Info: yaks have itty bitty nipples. That was news to us. They also produce very little milk in each milking. It takes a long time to milk them all, but how will you ever have yak milk porridge in the morning if you don’t milk at night? Or yogurt. Or cheese. Or fried cheese. Or dried yogurt. Or yak butter. Or **gasp** the Khazak yak milk tea??? You’ve gotta milk those yaks! If you’re curious, yak milk yogurt is pretty damn good!

Baby yaks tied up before being brought to their moms to suckle briefly, which starts the flow of milk! They were tied with yak hair ropes. Oh, the irony.

Smile everybody, there’s going to be yak milk tea tonight!

Baby yaks are cute as can be!

This one is just a biiit more intimidating!

What about the wranglers and the rest of the staff? We were really, really lucky to have a great group looking out for us all the time. You’ve already met Smokey Joe and Khatran in the previous blog, but why not a few more photos? 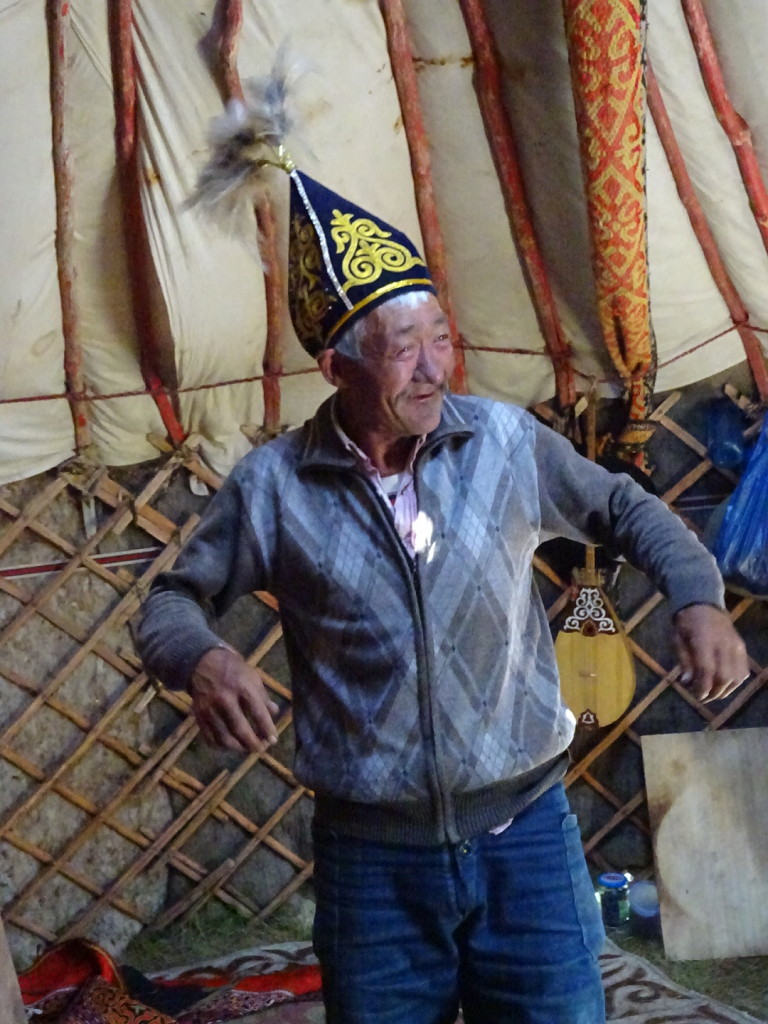 Smokey Joe was always clowning around in the gers, but he was serious when we got around the horses.

They, along with Erlan, were our main wranglers. Erlan was so, so good…but hard to photograph as he was always in motion!

Between those three badasses, all winners of numerous riding competitions around the area, we were in very safe hands! 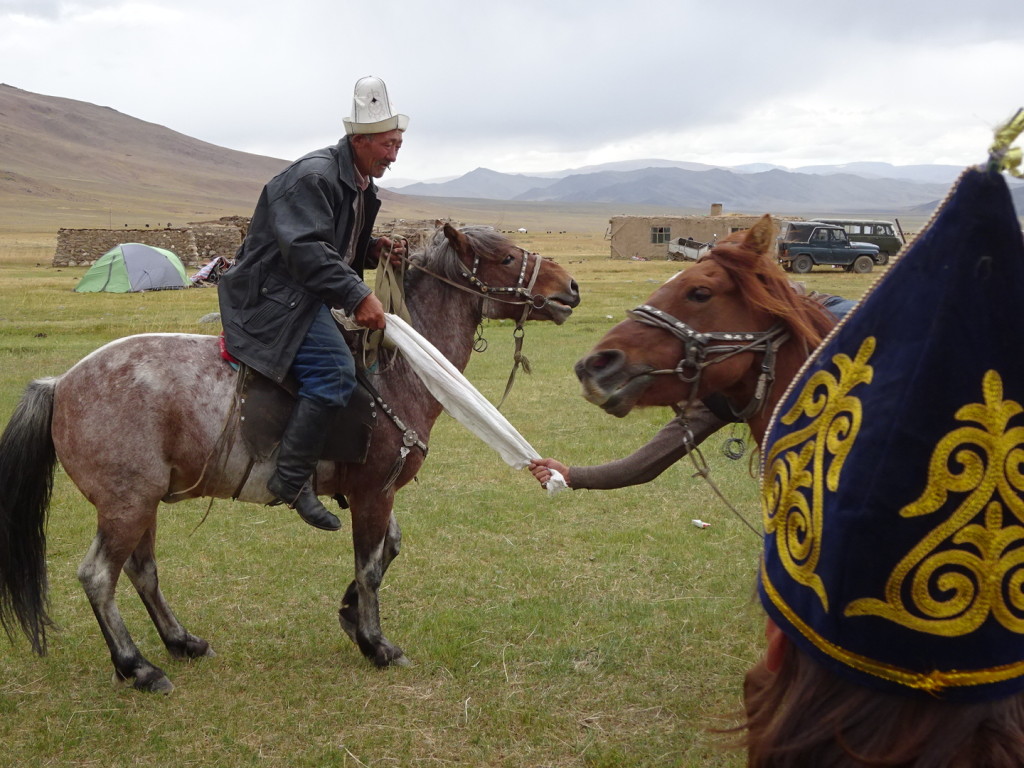 Yes, that’s Mauitkhan and Erlan playing tug-o-war. On horseback. It was like a dance, they were so good! Circling each other and spinning the sack they used for tugging, it went on for at least 5 minutes. All our jaws dropped as these badasses just kept going and going!

Even though she wasn’t Khazak, or even Mongolian, I have to give a huge THANK YOU to our guide, Jen, who was so kind and positive and supportive through the whole trek. And believe me, she had a loooot of things on her hands. She rode almost as well as the Khazaks and was, most definitely, a hell of a badass. 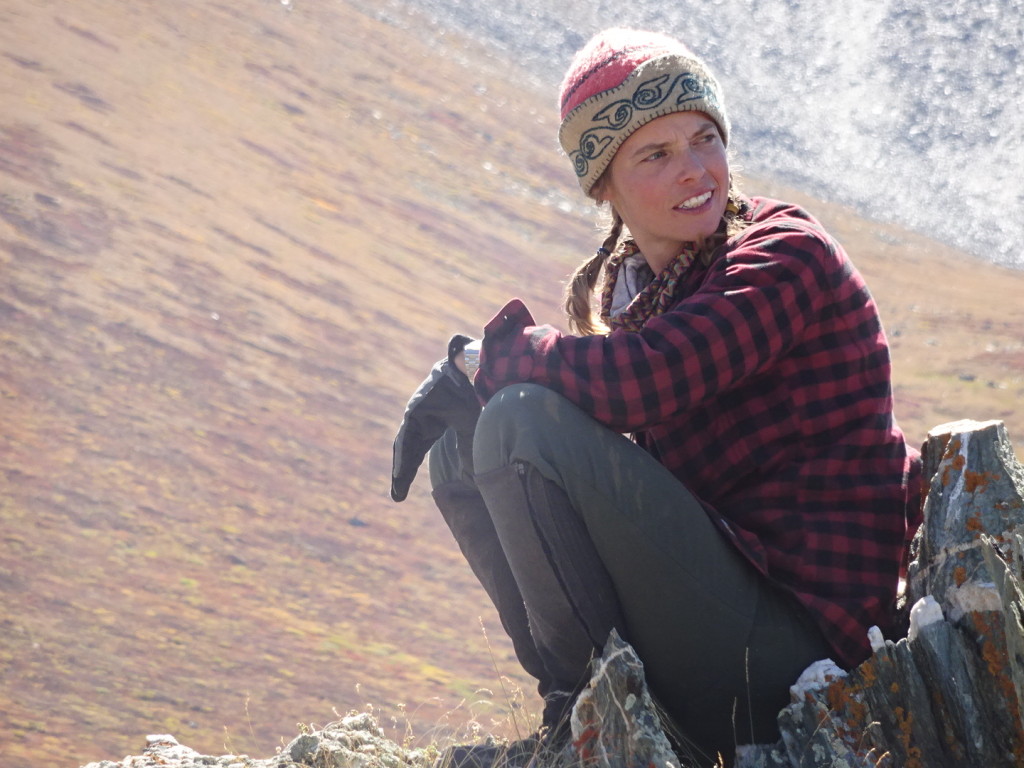 Jen Buttery, our illustrious leader – we really couldn’t have done it without her!

Next up, my thoughts overall about the whole experience. You know you want to hear about that!

If you missed them, here are our earlier blogs on Mongolia: