Ireland was yet another country not on our “round-the-world-trip list” until PapaBarr and Miss Grace (Aaron’s folks) offered to meet us in Dublin. If someone’s inviting us, though, why not!? As luck would have it, almost as soon as we made plans to go, we also were selected for a terrific Irish pet-sitting assignment that fit our dates perfectly! Apparently the luck of the Irish is a real thing because we had an excellent run of good luck with many sunny days and an all-around good time. The blog on Dublin is in the works, but for now let’s head over to the quaint, picturesque town of Adare…actually a little outside of the little town of Adare. If you look at a map, first find Limerick then head west and slightly south to find Adare. We were somewhere around …almost, a little further….riiiiight there!

Adare and There happen to be pretty much the cutest little rural areas. About where you imagine leprechauns might live. But they don’t. The Irish seem very serious about that fact. 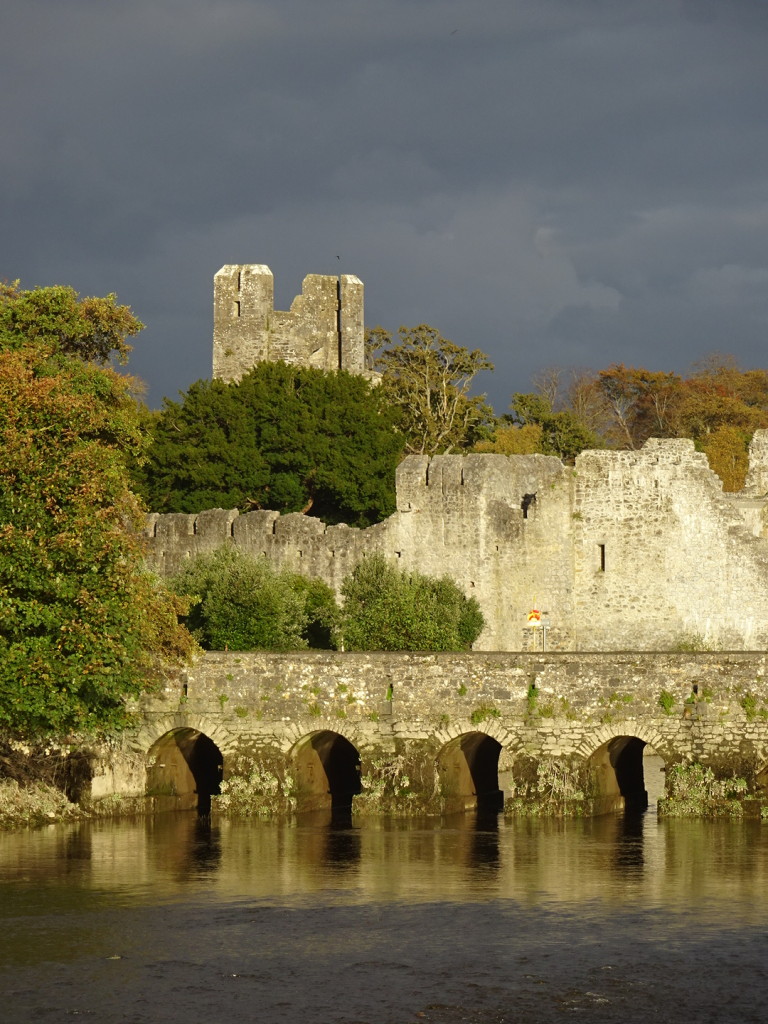 Like so many places in Ireland, Adare has it’s own castle. This one is just ruins, though. Makes for fine photos nonetheless! 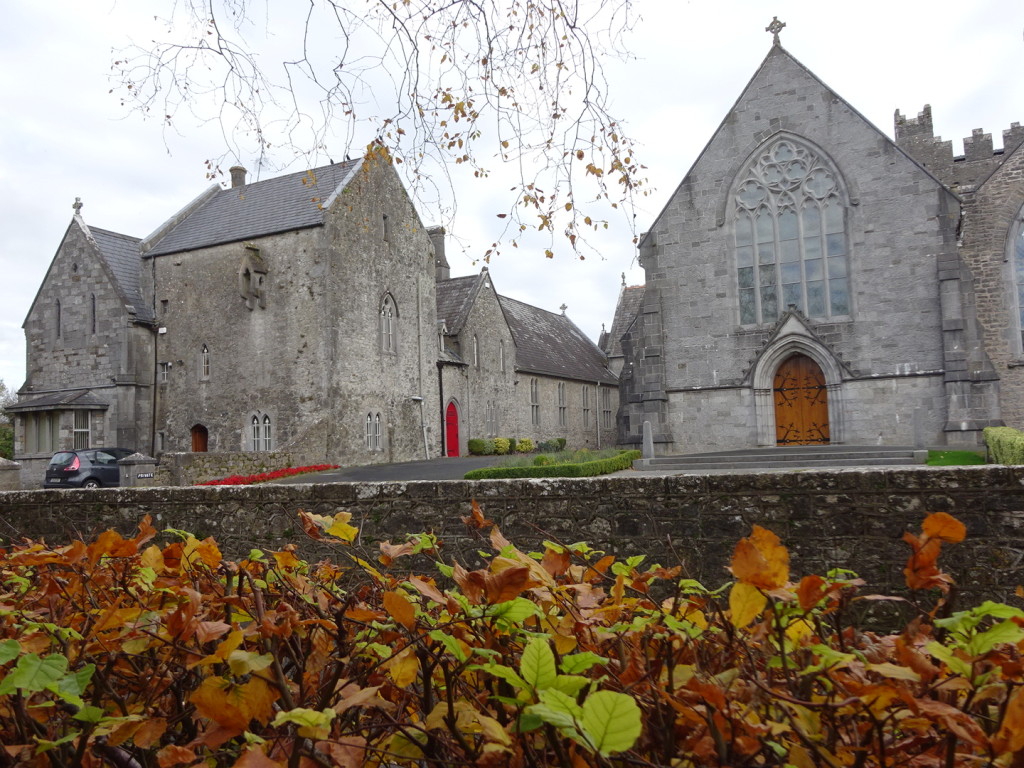 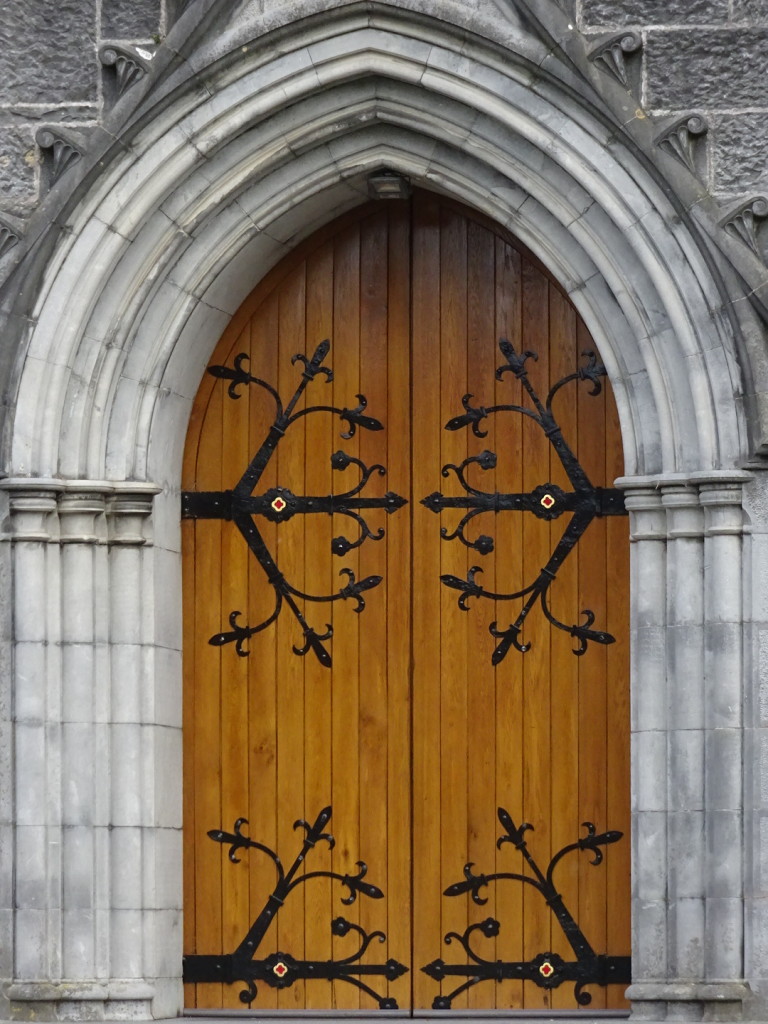 Check out those hinges – the church is doing things up right.

The park in Adare. We had lunch here on Halloween. Every few minutes some dogs would trot by on their walk, typically followed by little kids in costume. We felt very safe with both Superman AND Batman coming by to protect us. No dogs in costume, though – maybe that’s an American thing.

We call it, Mooo-Colic. At every turn we found a cow or a sheep. Even a Shetland pony or two!

In fact, we spent a lot of time looking at cows. Aaron took this video and what happens while the tape is rolling cracks us up. Wait for it, waaaaait…..Enjoy! 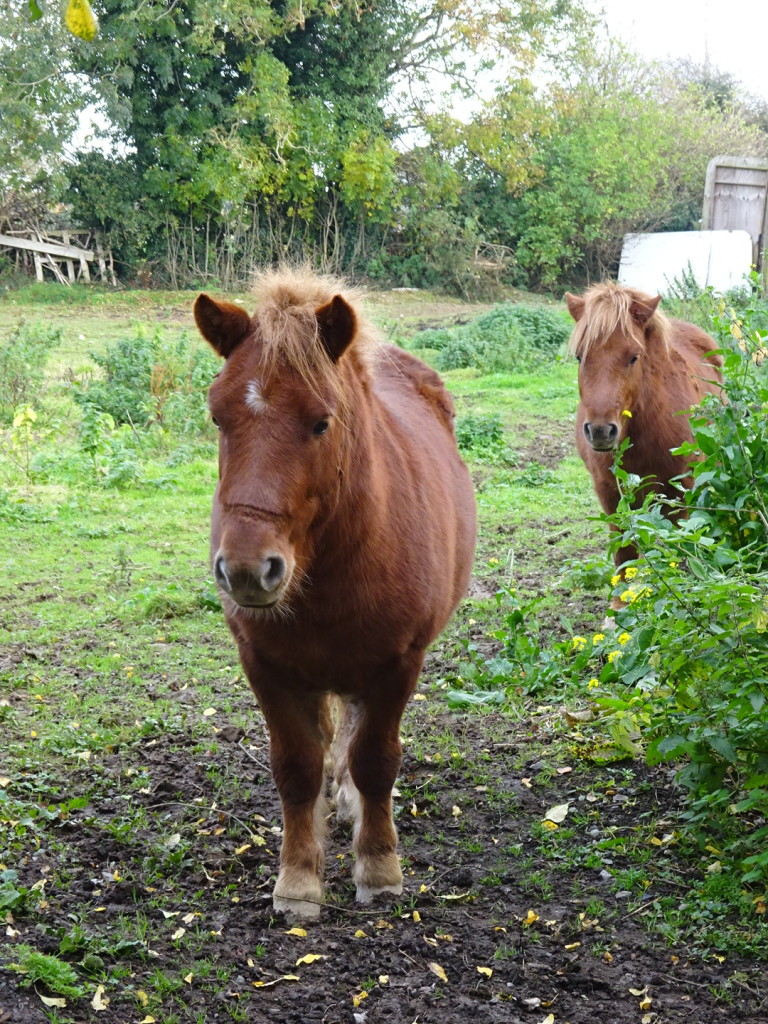 Our neighbor Shetland ponies…only slightly smaller than Trusty, my Mongolian horse. They remind Aaron of his favorite book title ever (as told by his Pa): “Shoot Low, Boys – They’re Ridin’ Shetland Ponies” 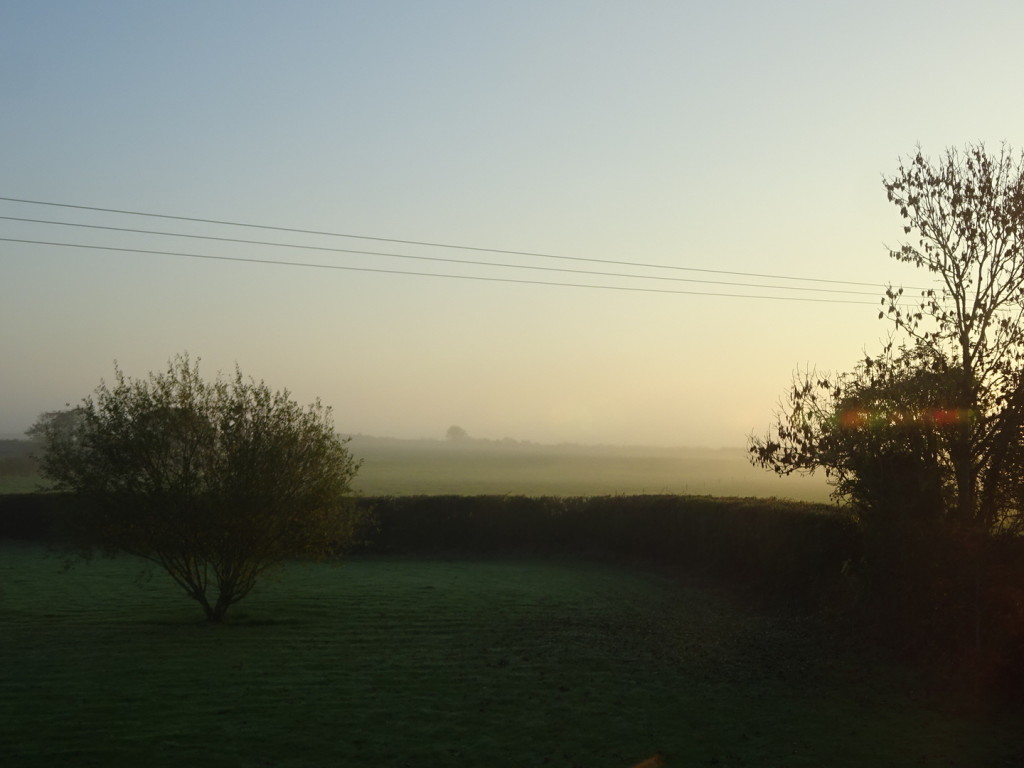 Sunrise from our house-sit. 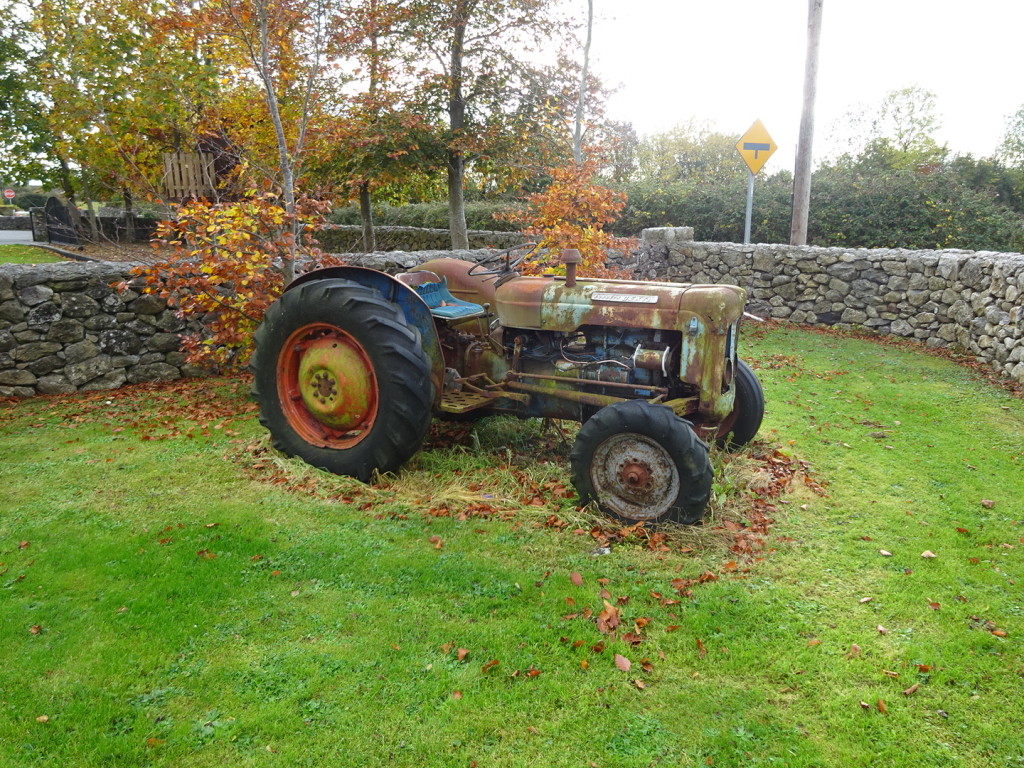 If it wasn’t country enough, there was this in the front yard of our house sit. Love me some rust!

The whole reason we ended up just outside of the sweet little town of Adare was these two charmers, Molly (the dark one with a tail) and Sunshine (no tail).

Molly always wanted to be cocooned, something Aaron relates to. She would occasionally wander around with a giant blanket around her neck…kind of like a lazy teenager who refuses to put on pants. Hillarious, but hard to photograph as it turns out. 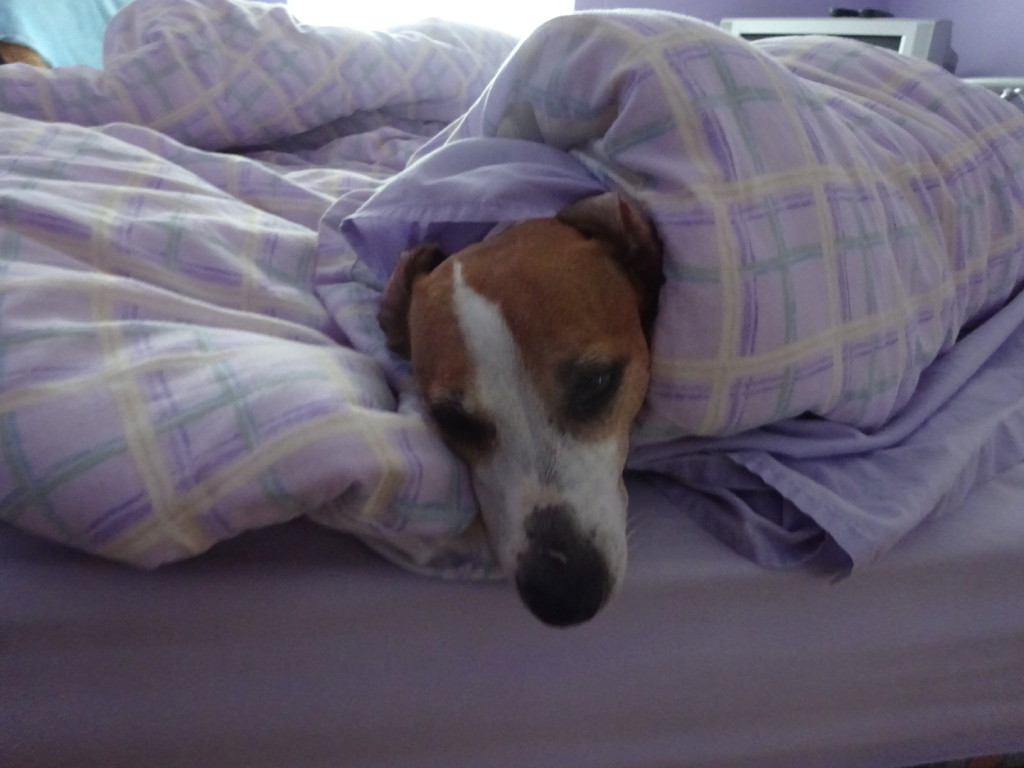 Stop it! You’re too damn cute! And get out of my bed. No really…now…I mean it….stop looking at me with those adorable browns!

Sunshine wasn’t so much about being under the covers, but appreciated the willing heat source any chance she could get it. 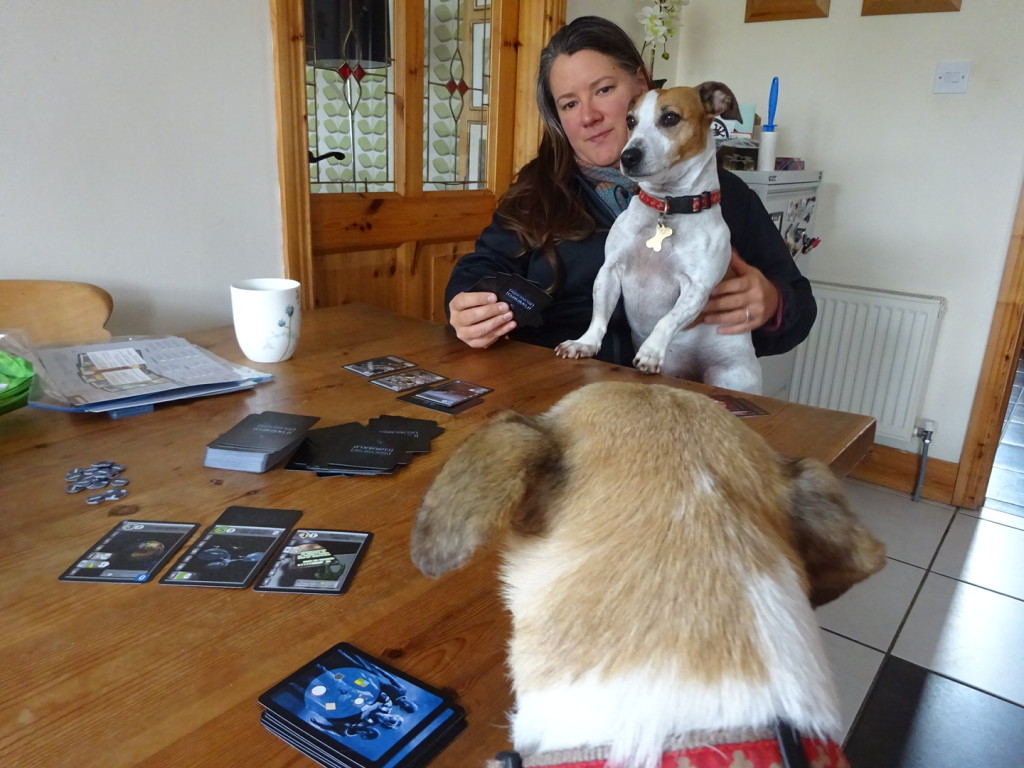 Social like they are, the pups liked to join us for a few rounds of Race for the Galaxy every night. Molly and I didn’t win nearly as often as we would have liked. Let’s face it, Sunshine is the brains in the operation.

TV time is a universal love of all dogs. 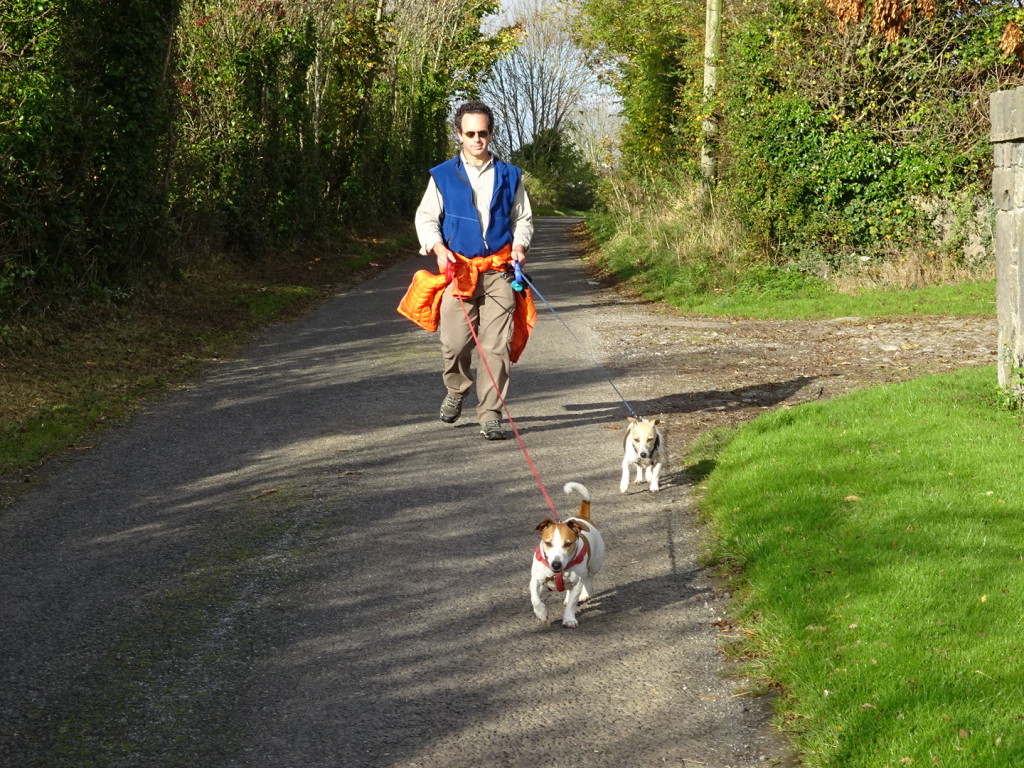 A bit easier to walk than some (we love you anyway, Bella!). 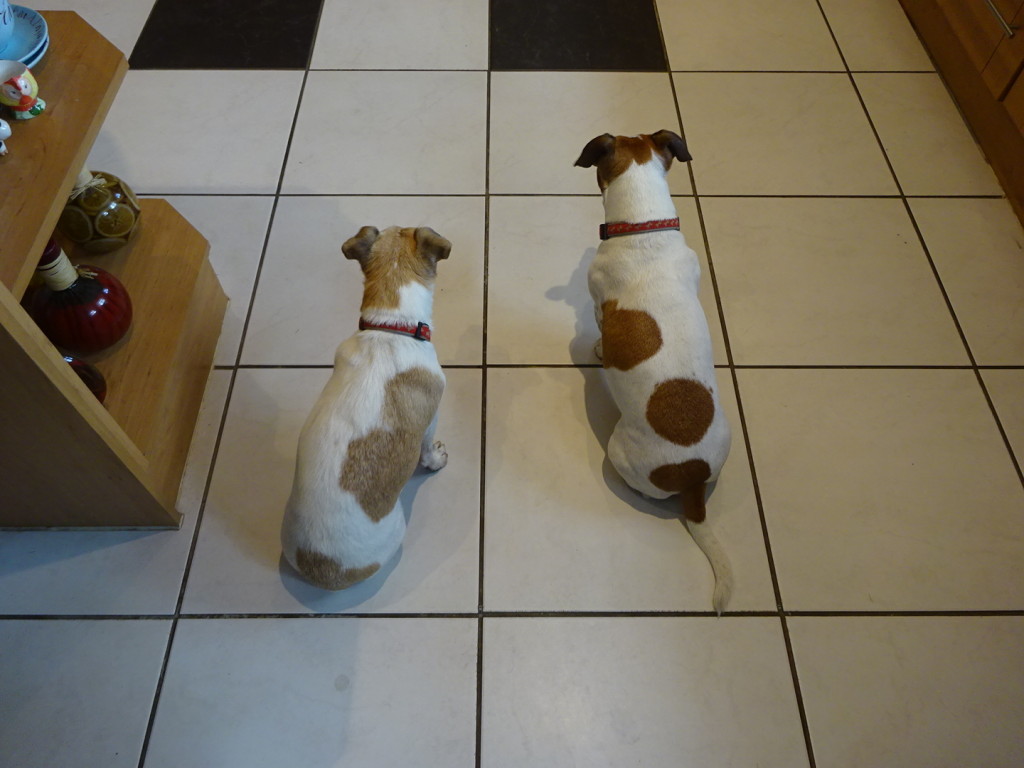 Up ’til now we always thought we’d get a knee-high dog, but after Molly and Sunshine… gotta say the Jack Russells are now contenders!

We commemorated these two cuties in this here rockin’ video. Trust me it was all synched up until we pressed “save”. We did it twice in fact – Grrr! Freeware, you vex me!

In other super-duper-exciting news – November 6th marked our one-year-on-the-road anniversary! We call it Map-A-Versary. And like every A-Versary, we celebrated with some dessert. Chocolate Dessert. Home baked, in fact! Yum. Travel is always an adventure and baking in a foreign land is no exception. In this case there were no measuring cups. Plus, things are done by weight in Ireland, not volume like in the US. I would “eye-ball” the ingredients and made two pumpkin breads, one chocolate cake and one batch of homemade brownies over the course of two weeks. All of them fantastic, if I do say so myself…and Aaron agreed! Yep, got me some mad baking-by-sight skills. 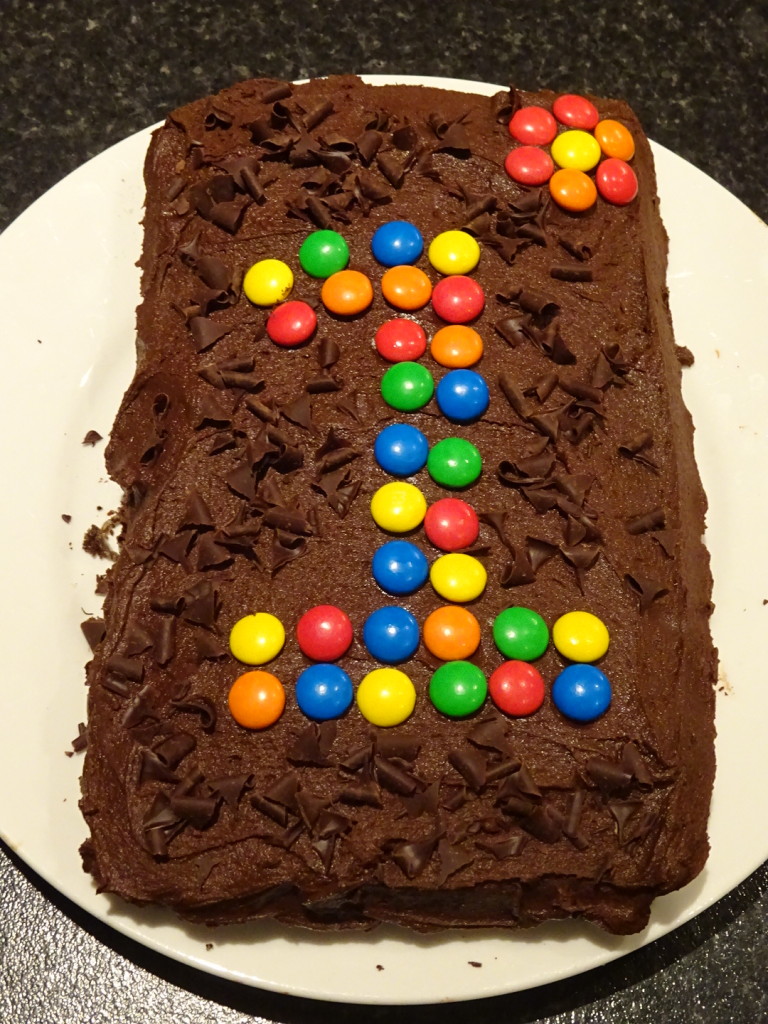 You gotta celebrate! Happy 1 Year to us!

We also celebrated with a road trip to the coast: Dingle and the Slea Head Drive! Seemed like we just HAD to be on the road for it to be a real Map-A-Versary! 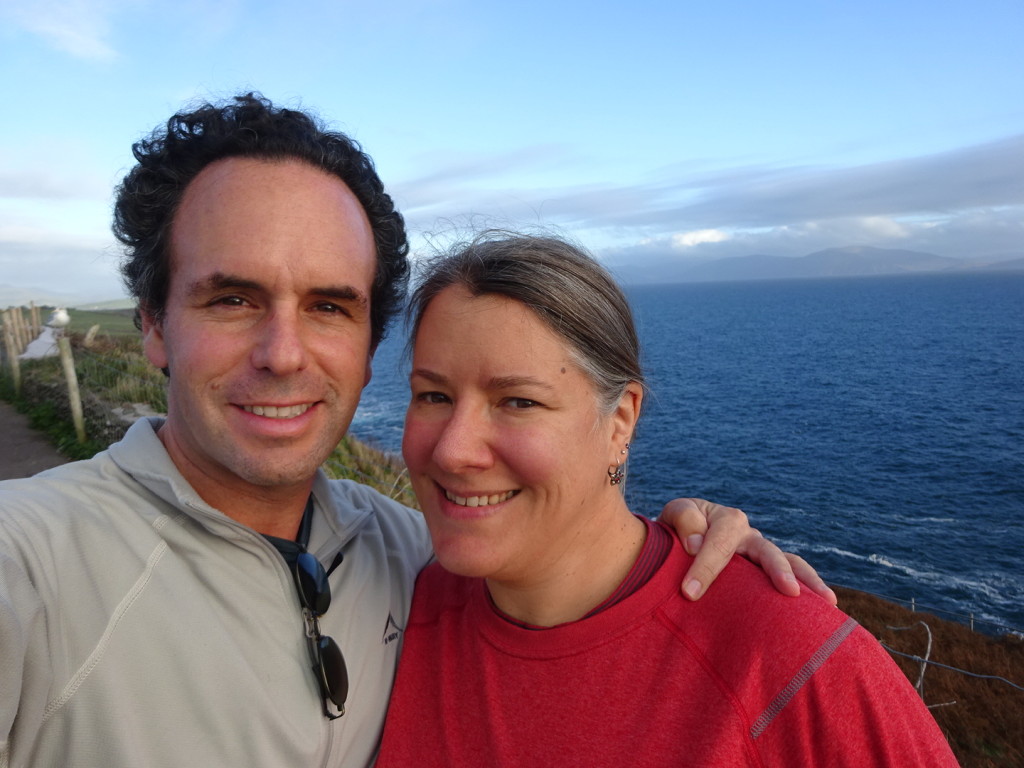 Map-A-Versary road trip! That’s the Northern Atlantic behind us.

The Slea Head drive along the Dingle coast. Look at those colors! 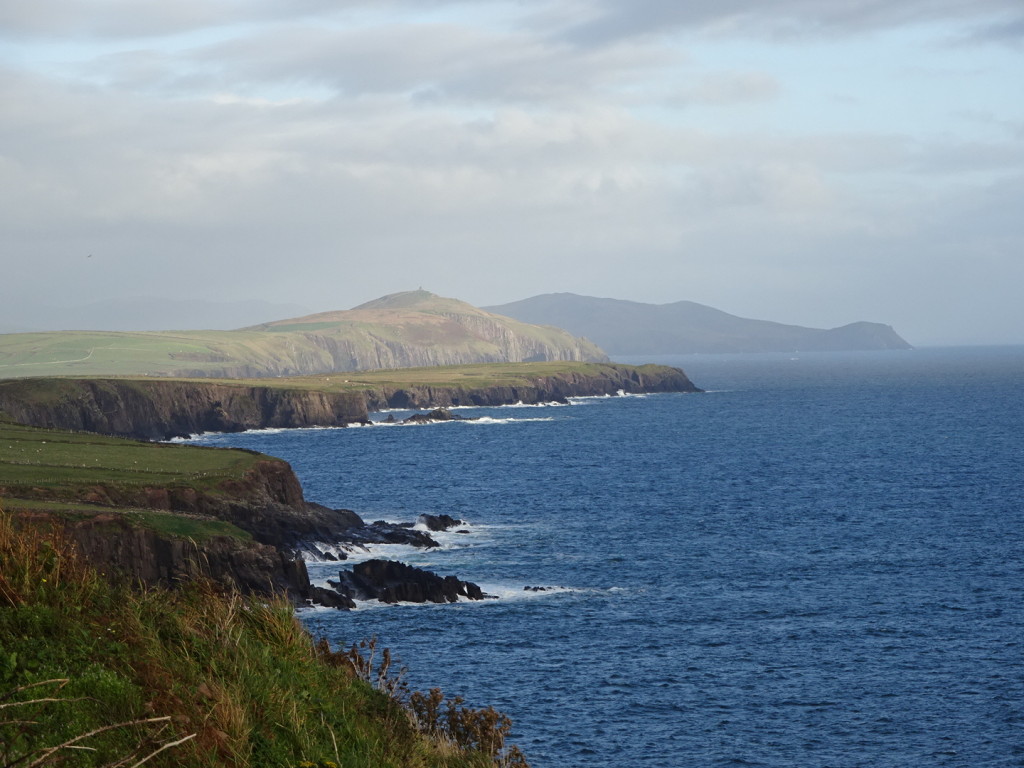 Not too shabby, eh?

I wanted rugged coast and Dingle did not disappoint.

The waves were crashing, the crags were sharp and the views magnificent!

Hard to take it all in.

We also saw the iconic pastures of Ireland. Learned that they don’t have the same historic-footpaths system of England – no walking through the farmers pastures this time. I did like one Irishman’s description: “Well, if you did walk on their land they would probably stop you and send you out, but you wouldn’t have to worry about them taking a gun to you like in America.” Ahh, such a sad reputation we have with our guns. 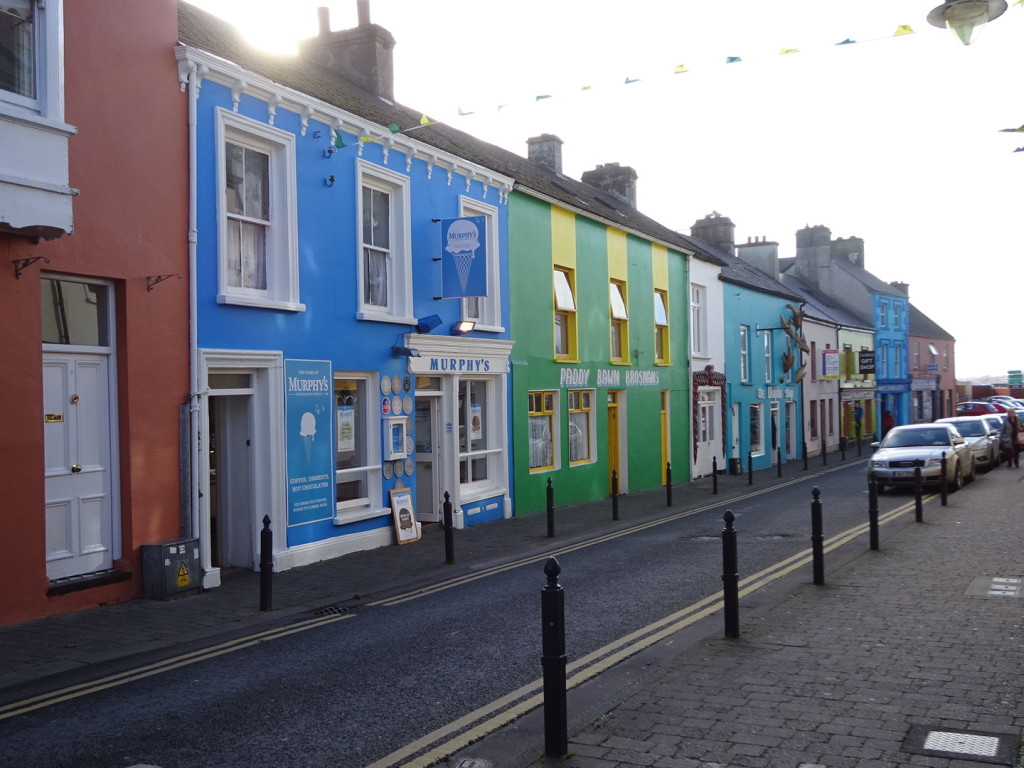 The town of Dingle. Super cute. We were there in low season and it was busy enough. We can only imagine that this place is jam packed in summer. Have we mentioned lately how much we like to travel in the off season? We highly recommend it!

How to pick? HOW???? This is at Murphy’s Ice Cream in Dingle. They are kind of famous for pushing untold number of samples on people who so much as look in the window…and it works. You know they twisted our arms. We HAD to. Gotta be polite. Didn’t hurt that the gelato and sorbets were DELICIOUS!!!

At the recommendation of PapaBarr and Miss Grace we added the town of Foynes and the Flying Boat Museum to our outings while pet-sitting. Just twenty minutes to get to a cute town with a quirky museum and walks with fall colors along the River Shannon? Yes, please.

There was a short era before WWII when airlines were trying to figure out how to make profitable commerical trips across the Atlantic. Flight was just in it’s infancy and, for a very short while, float planes called flying boats were used for testing the run. Everything seemed possible and plans formed for a regular airport to be built. Well, you know how this ends – the war breaks out, the airport is never built and the route never takes off. For a few short years though, Foynes was where your float plane landed. It’s a charming little museum and definitely worth the stop.

One more little factoid – Foynes produced and shipped thousands of Confederate uniforms during the US civil war. Who knew?

In front of a replica plane. The originals were all destroyed or scrapped.

A little odd seeing a US flag, but it was a PanAm flight… 48 stars – authentic as this would have been before Hawaii and Alaska were states. 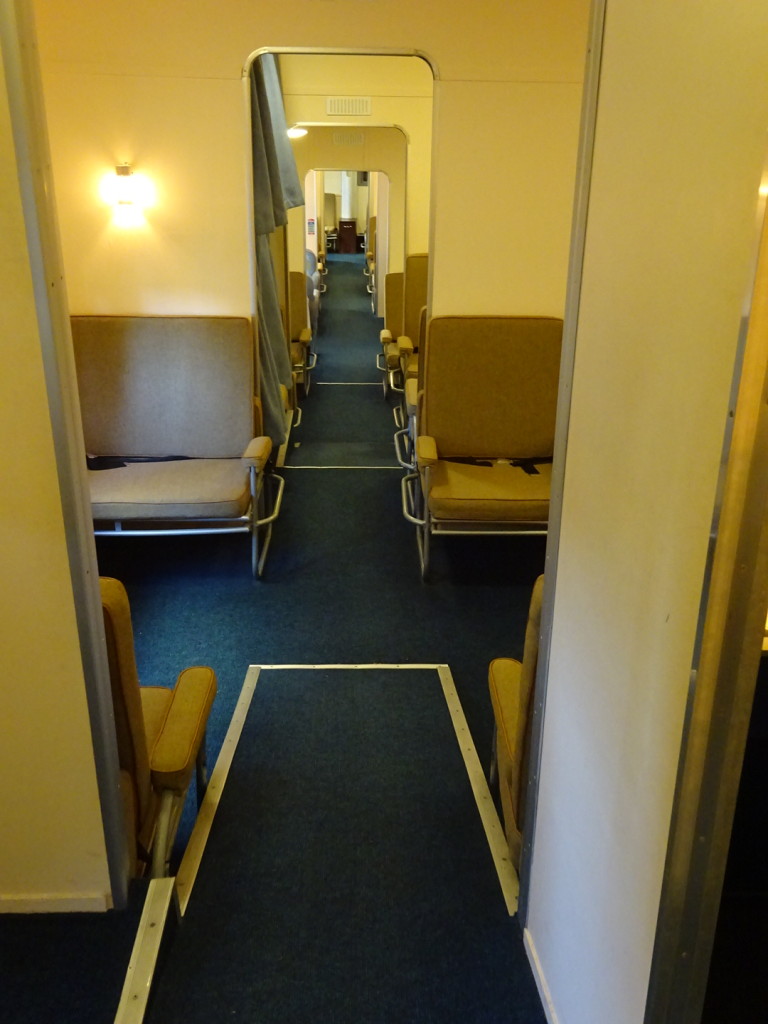 Inside the flying boat. A lot more spacious than a modern airplane. It included sleeping berths, a dining area aaaand a honeymoon suite. Can you imagine? I guess the mile high club goes way, way back!

I’ll get that for you.

Aaron comtemplates yet another career change. Pretty sure the fact he gets bad motion sickness will doom this one quickly! 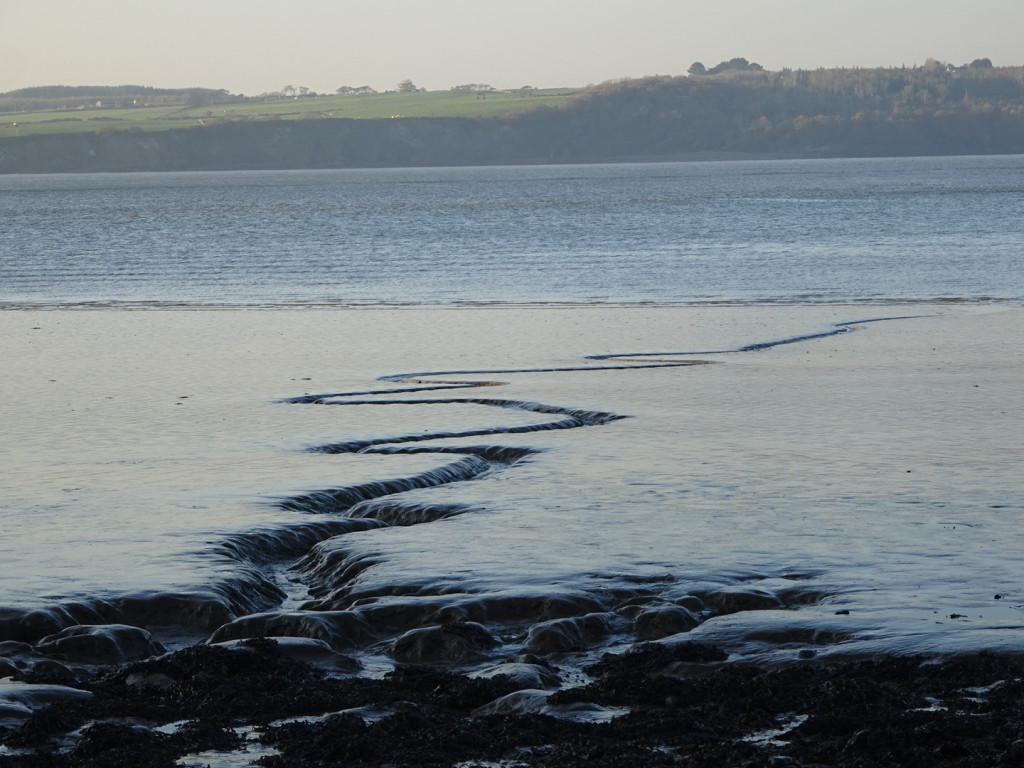 The River Shannon – after the museum we walked along the Shannon taking in the last light of the day.

The forest was lovely leading down to the river.

The trees kind of look like mother nature’s stained glass.

Why is he hiding?

Closer to home we made a couple of trips to Limerick. The River Shannon runs through the city and they are creating a nice pedestrian walkway while rehabbing the local area. We enjoyed a good dinner there and took in the Limerick Art Hub gallery. Limerick was VERY friendly with an old man stopping to talk us up for no reason. He was a character and was sure that we both have Irish roots, though neither of us believe that. Everyone HAS to, according to him. 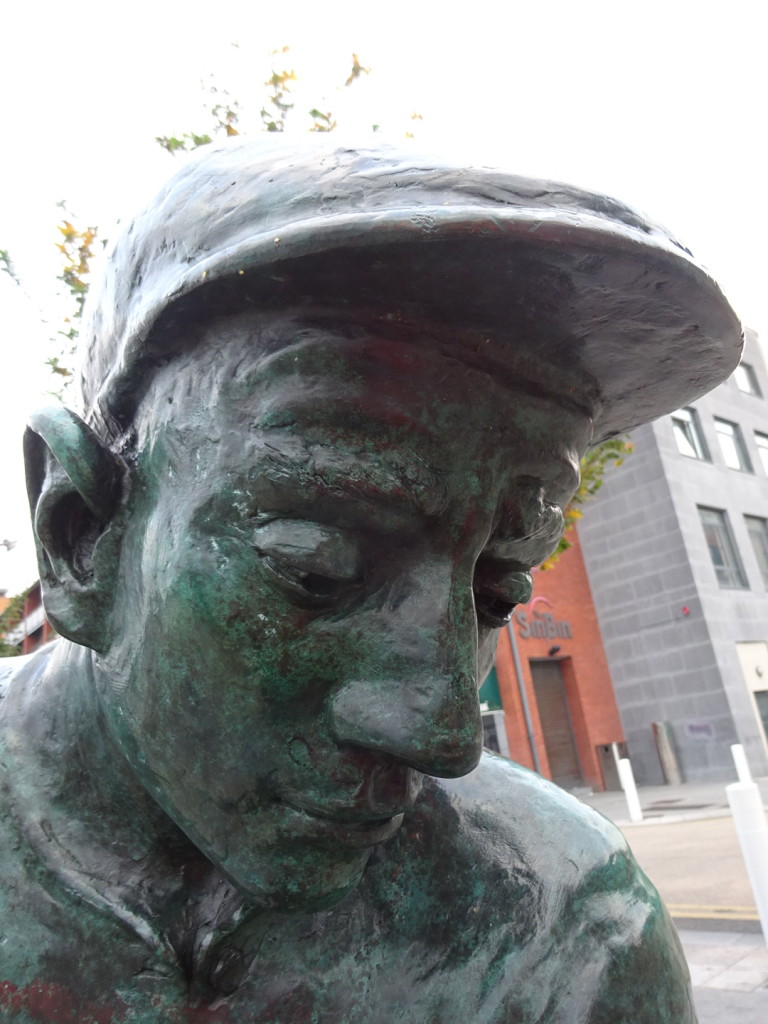 Sculpture celebrating the dock workers which sits on the new pedestrian way.

Turns out we didn’t take many photos, so this is a decidedly short section. We can say that we had one harrowing experience when a tour bus seemed to be intent on totally crashing into us as we curved to avoid mowing over the horse and buggy going around the round-about in the dark during rush-hour. Really not sure why a horse and buggy insists on being out in rush-hour, but we were both really relieved when it got off the road and drove down the sidewalk instead. The things we get to see on this trip – you can’t make up! 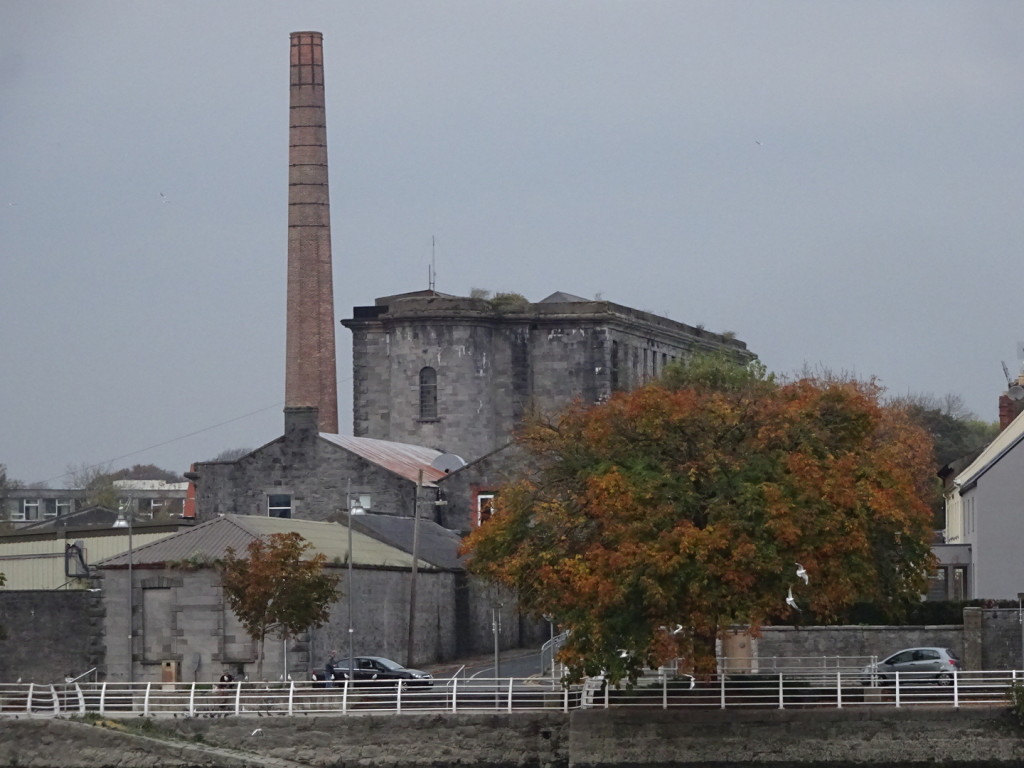 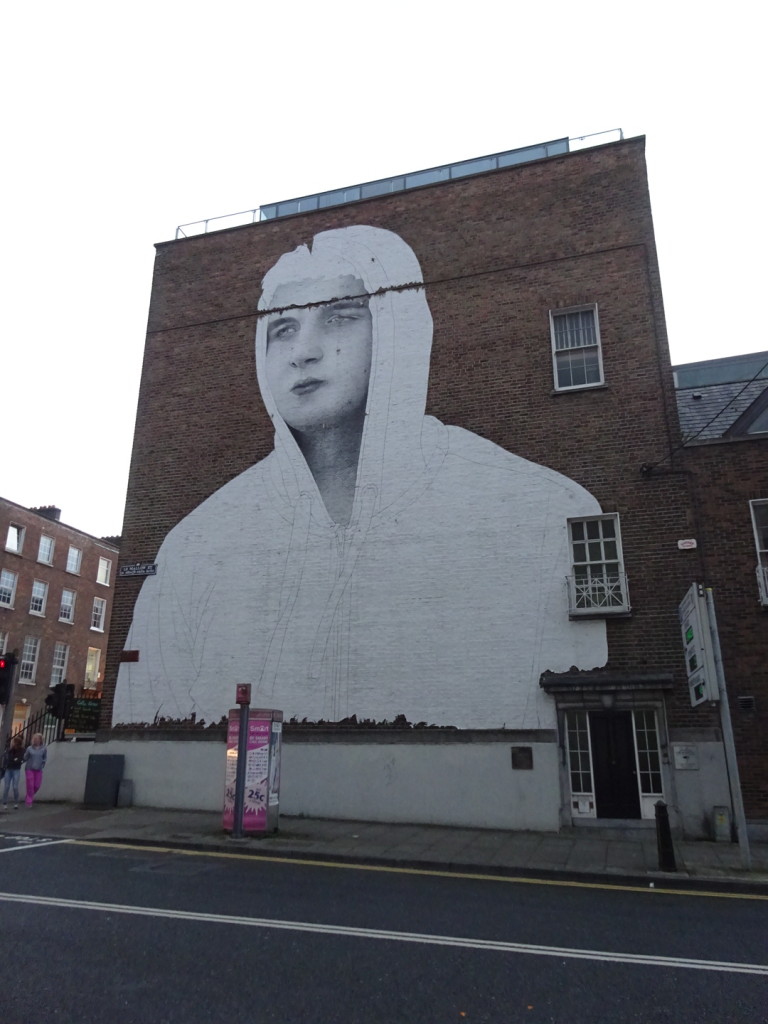 …and just a bit of street art.

Back near Adare, our housesitting clients rent and sell motorcycles and classic cars. It’s a very cool operation and Chris and Elaine could not be nicer or more fun to work with. We totally think you should check them out when you come this way. RetroVentures Ireland.

While we were there we got to spend a little time “testing” out the vehicles. 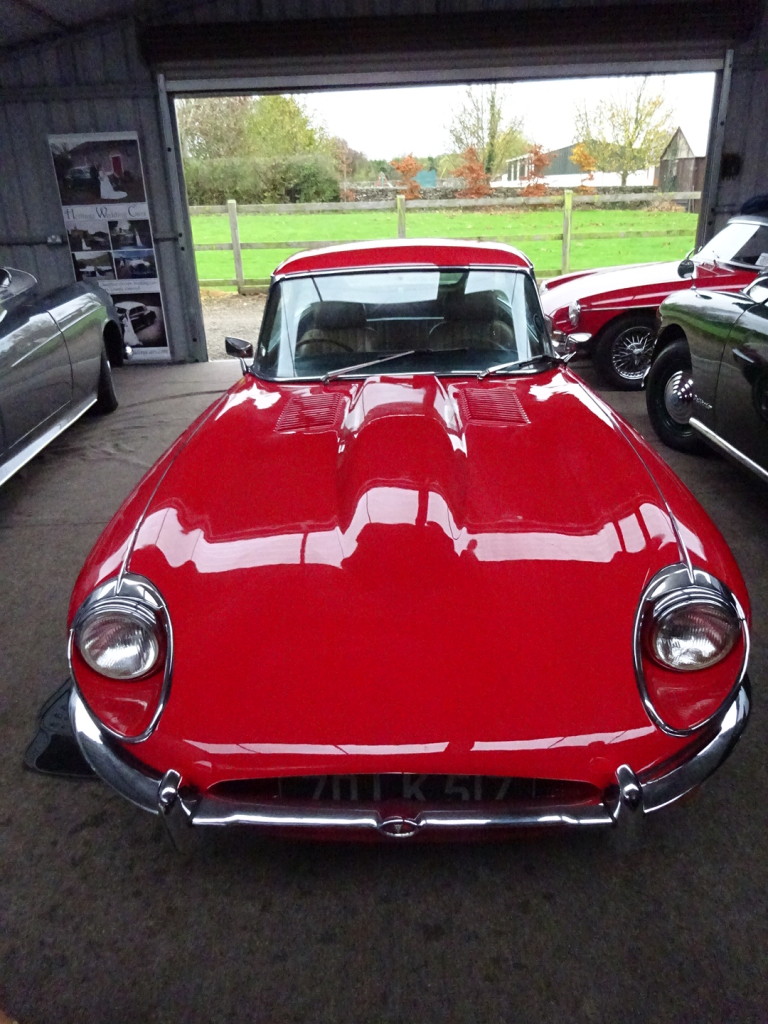 Wouldn’t it be great to explore the Slea Head Drive in this baby? WISH I had asked for a ride!

Vroom! Vroom! Are these not the coolest looking motorcycles? These Enfields look classic, but they are brand new! 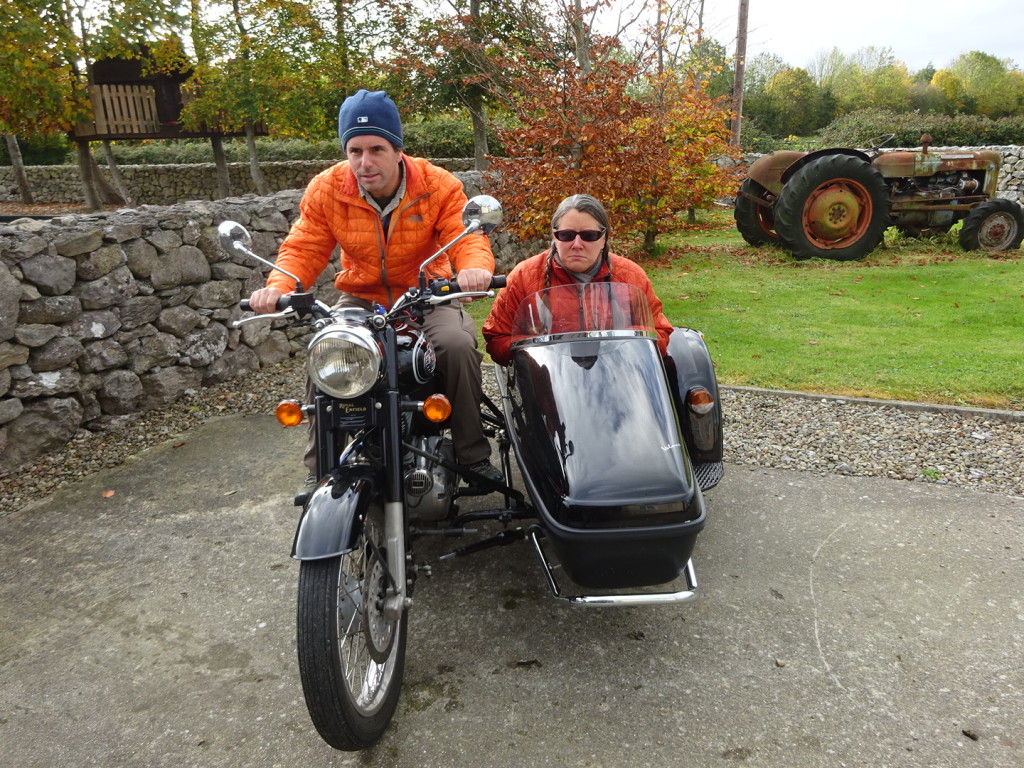 The only side car I like comes in a martini glass.

Hey Bay-be…wanna ride in my car? Not to make the same mistake twice, I took the driver’s seat in the Delorean.

Back to the future anyone?

Rural Ireland truly was fantastic, especially getting to make more new friends with our lovely house-sit hosts – such a pleasure, Chris and Elaine! We’ll put up a couple posts about our great trip to Dublin soon, so more Irish glory to come…including a whole post on the street art. Sláinte!