Note: this is the first post of our absolutely mind-blowingly amazing Salt Flats Tour in Bolivia. It was three days long and included an incredible variety of sites and landscapes. We will put up some quick posts about the other stops we made.

Okay, outside of Antarctica there is nothing like it! Nothing. NothingNothingNothing!!! Have I made myself clear? NOTHING! I doubt I have ever compared anything to The Ice, but The Salt came darn close. “Other-wordly” is really my only useful adjective. There were simply times we did not know where to look when a mind-bending 360 spin showed the idyllic sunset, lightning storms, moonrise, rushing clouds, extreme flat, and giant mountains… to say nothing about the non-stop reflection below our feet and the crazy “perspective photos” we were able to take. The whole thing was like stepping into the abyss. For a little sneak peak, here is a very short video of the view. 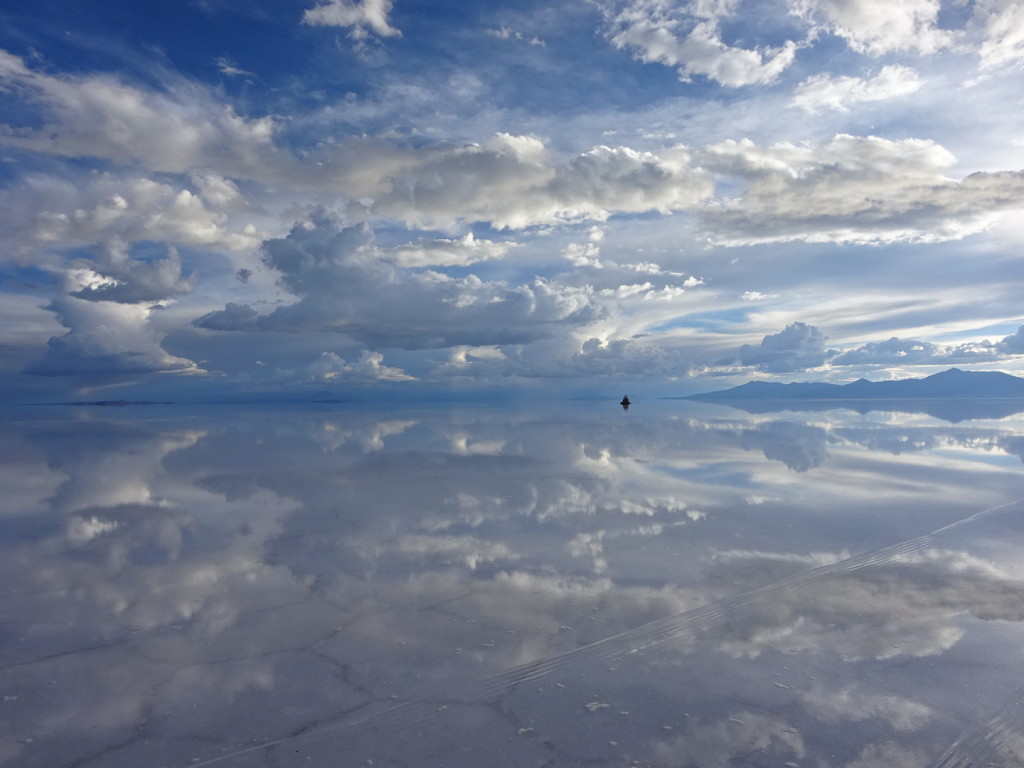 The black dot is a truck on the horizon.

GETTING TO THE SALT FLATS

We’ve wanted to tour the Salt Flats for years now and having went, we cannot recommend it highly enough! For us, half the adventure was just getting to the tour. We left Copacabana for a three hour bus ride to La Paz that turned into 5 1/2 hours. Traffic in La Paz is ridiculous! Upon arrival we were informed that travel would be difficult the next day due to a bus driver’s strike…that would be an understatement, as we learned in the morning that our (and every) bus was not running and we wouldn’t make our train connection a few towns away. *Sigh* It’s a long story, but the short version is that we got some of our money back on the train and booked a flight (Ugh! We didn’t budget a flight.) to Uyuni, the jumping off spot to the Salt Flats.

We kept our fingers crossed that we would get good tour-mates, but we were worried. You spend all day in a truck, sitting three-across…you better like who you’re riding with! When we signed in at the tour company (Thank you Red Planet!!!), two of the most crochety old people wandered in with their rolling luggage in tow and started yelling at the tourist clerk. No “hello” or “good day” – they went immediately to complaining! We hadn’t even started the tour yet and they were complaining!! My head went down as I made a little prayer to the travel-gods, “please, NOT with them”. 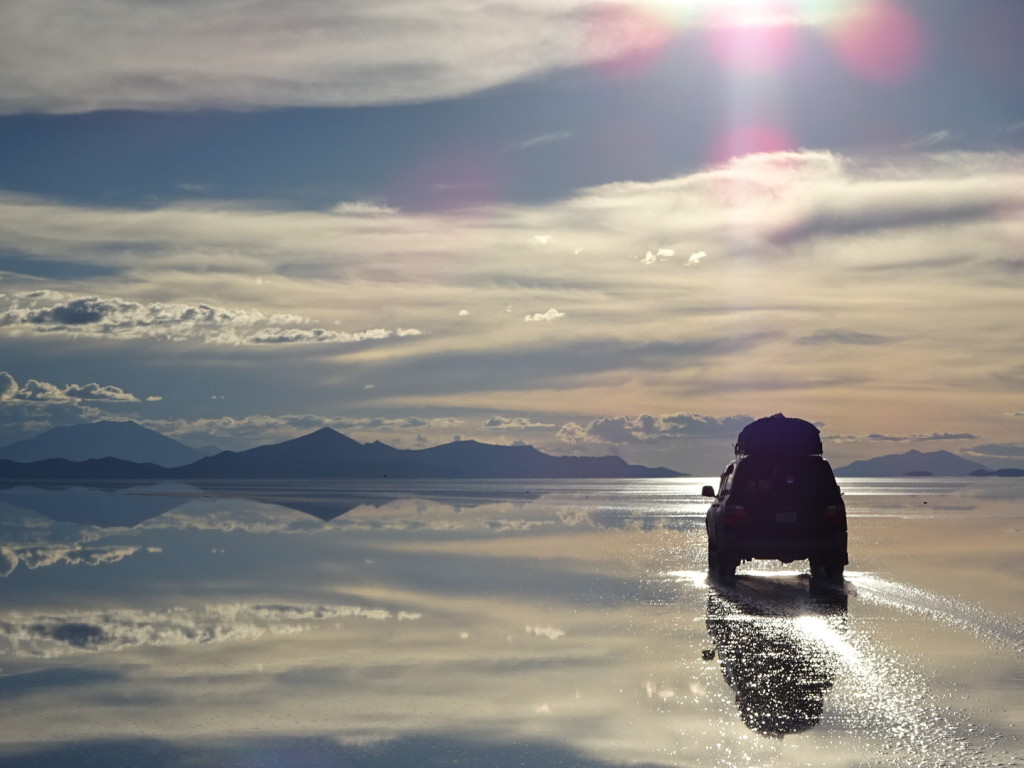 Our truck awaits us.

ONLY THE FUN PEOPLE

The Red Planet folks sorted everyone into a caravan of five late model Land Cruisers and, thankfully, the cranky-franks were in a truck much further ahead. We would be put into the last, funnest, most awesome truck! Only fun people for us. YES!

See? FUN people! We were in two-truck caravans. These are the people from our truck and our buddy-truck in front of us. (Anner on the far left and Aaron is 3rd from the right) 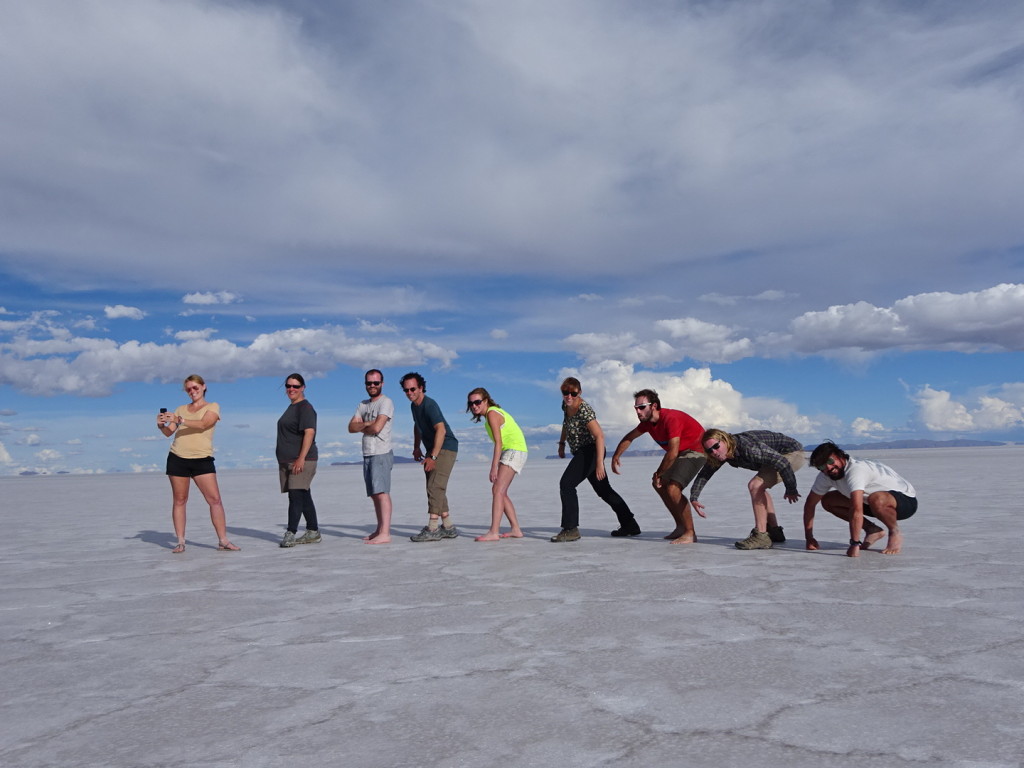 Bismar, our guide, wanted us to demonstrate the evolution of man. Yep, monkeys on the right, texter on the left!

Over the next few hours we would visit the train graveyard (subject of a future Quick Post) and then stop for lunch in a building made of salt and asked to dine with the people from our truck. It became abundantly clear how lucky we were as our table/truck was already down with the belly laughs with good-humored jabs at each other. It’s a good thing too, because for the next three days we shared a truck, tables at meal time and dorm rooms. Our truck reminded me of the Gang back home – you know who you are. At some point on Day Two, with a belly ache from laughing so damn hard, I yelled “You all are no fun at all! I hate this trip!” 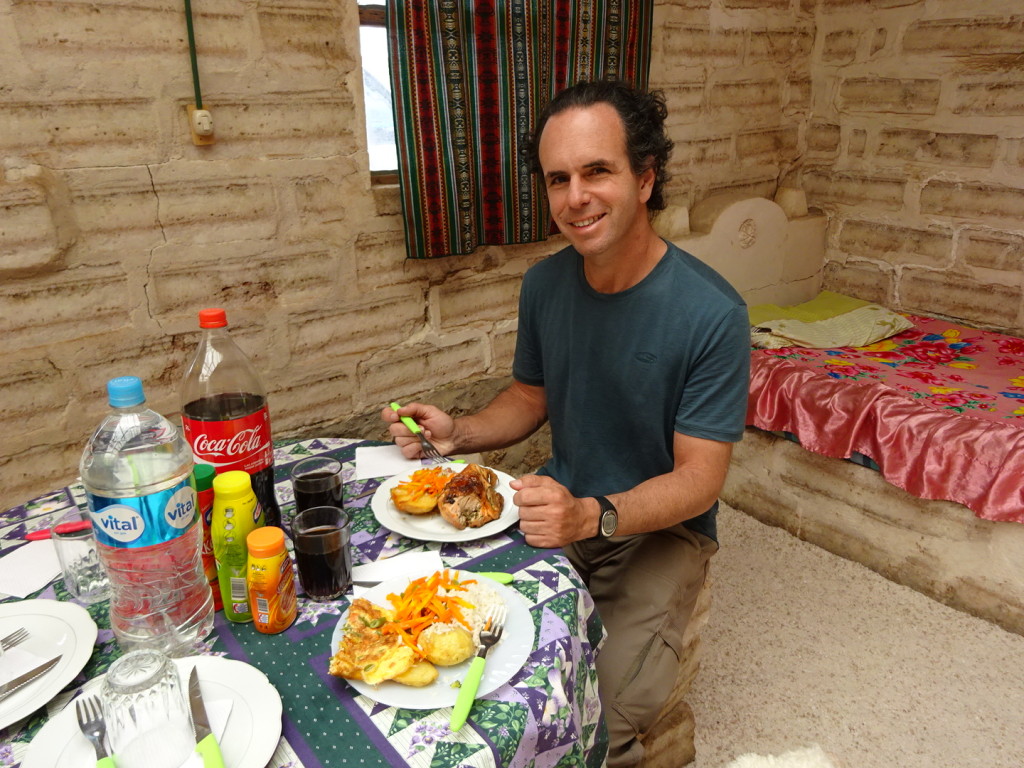 Eating lunch in a salt hostel, at a salt table, on a salt stool. Pretty fun! Lunch was delicious too! 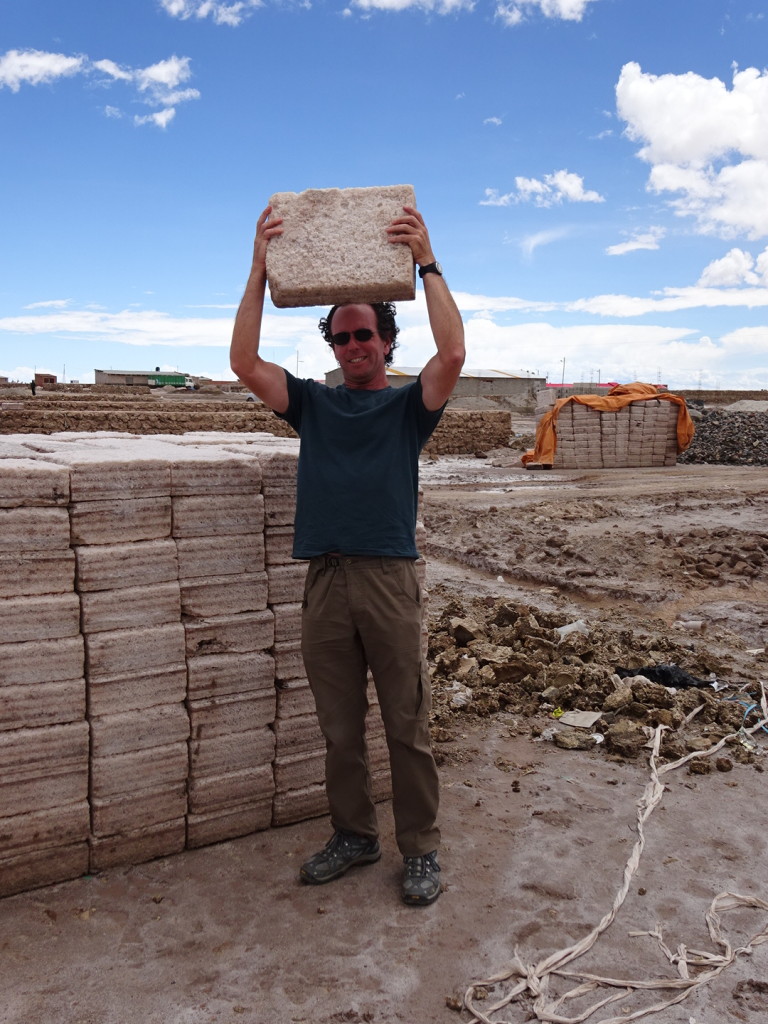 Aaron holding a very heavy block of salt. They are used as bricks to build structures and homes in the area.

In case you’re curious, this salt isn’t for eating as is – needs to have iodine added to be useful for human consumption apparently. 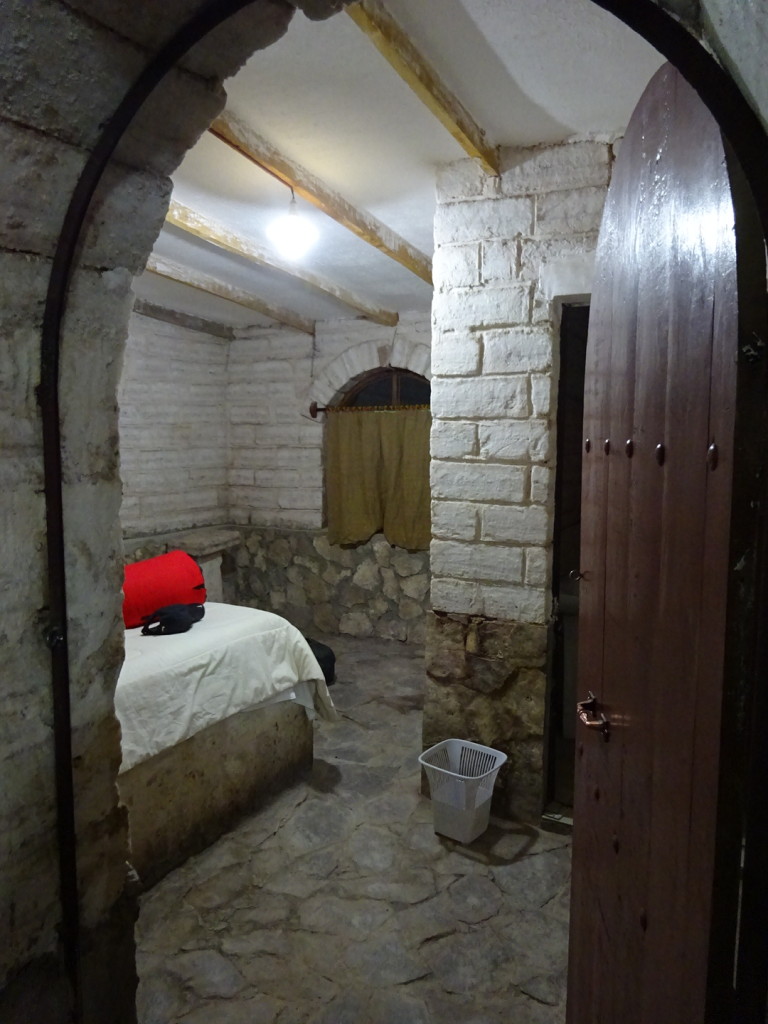 When we finally arrived at our hostal after a fantastically long day on The Salt, we found out it was actually made almost entirely of salt! Even the bed is on a salt platform! How cool is that?

The dining room in the salt hostal where we stayed (different from the lunch one). The table, stools, walls, floor – all salt.

BACK TO THE SALT FLATS…

The Bolivian Salt Flats are one of the biggest in the world (about 4,000 square miles). These salt mines could provide the entire world’s salt for fifty years. Fifty years! And it’s run by small number of families (I think 60 or 90 or so). One set of families dig the salt into piles out on the flat where they dry for about a week. A second set of families scoops the salt into trucks and drives it to land to dry some more. Then the last set of families does a third drying procedure by setting the salt over a fire, adds some iodine and packages it up. They use a little torch to run the plastic bags over with the heat sealing the little bags of salt. The whole thing is done by hand. No front loaders here. It is a very simple process of painstakingly hard labor. 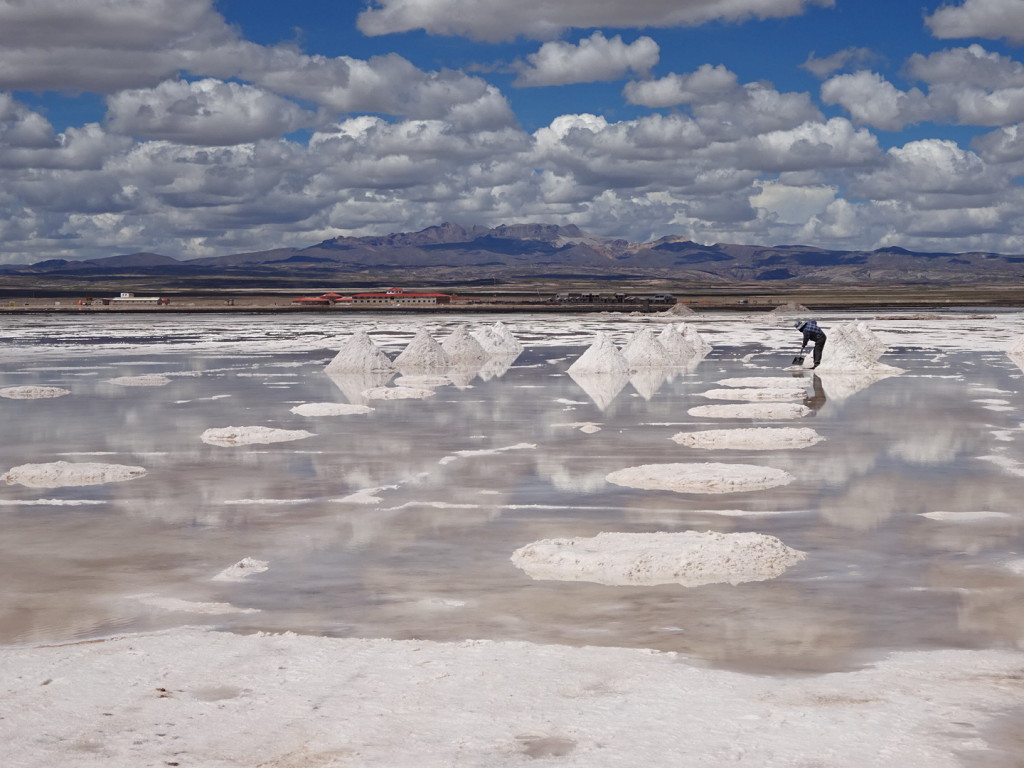 The cones are salt that has been dug up by hand by a man and his shovel and left to dry for the next 7-10 days. 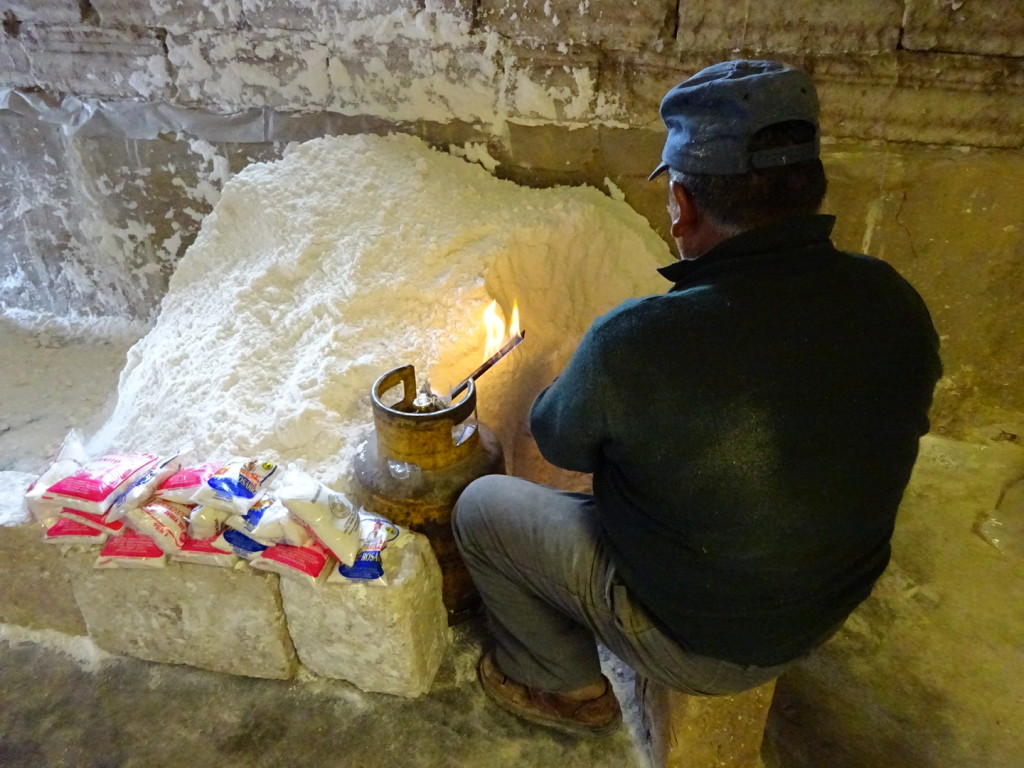 This older gentleman adds iodine to the salt, puts it in bags and seals the plastic with the flame.

Though we are here in rainy season and the weather was bad the day before and after, our one day on the Salt Flats was stunningly beautiful. We honestly took almost 400 photos and videos! You know it’s a remarkable day when the tour guides are snapping off hundreds of photos, too! We had the good fortune of seeing a dry part of the flat in the morning – where we could take “perspective photos” – and a part with rainwater on top in the afternoon – giving us awesome mirror reflections. We saw it with the sun high in the sky, the sun setting to a thousand colors, rainstorms in the distance, lightning storms, a giant harvest moon rising and with stars overhead. Magical! I don’t know what else to say, so we’ll leave it to photos and videos. All I know is that it was SO worth the trip. 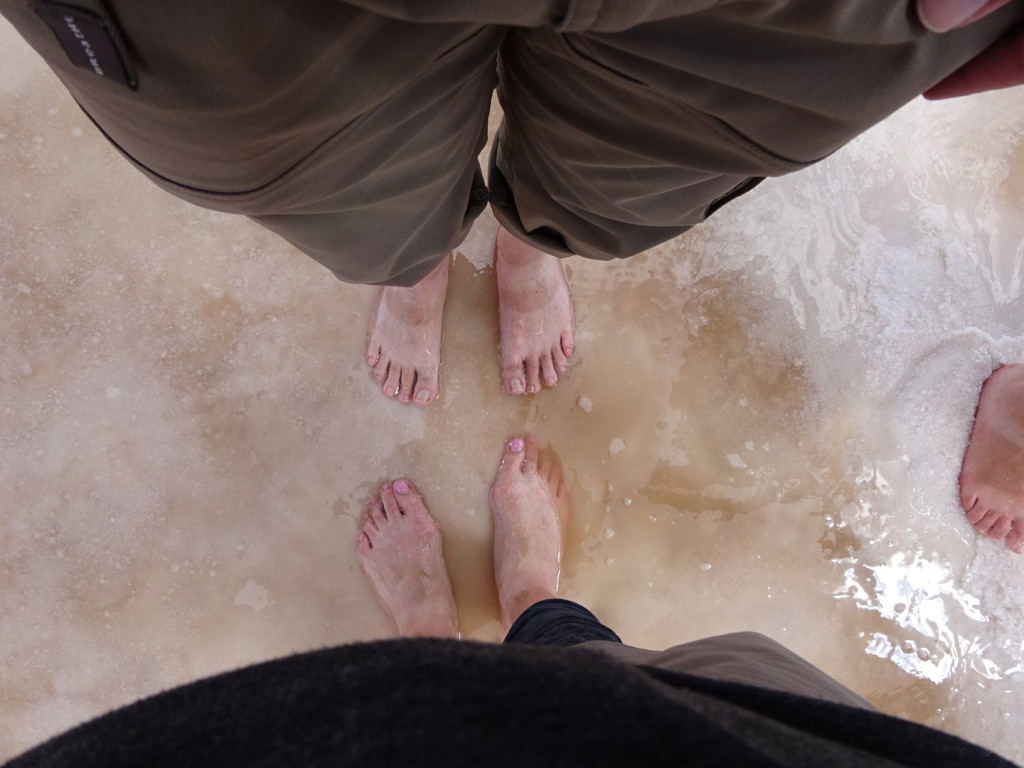 We all padded around barefoot on the salt…like all the world was our spa, we walked away nicely exfoliated.

First, some “perspective photos” (with many, many more scenery photos at the bottom of the blog):

Just driving around in someone else’s shoe.

He’s always blown me away… 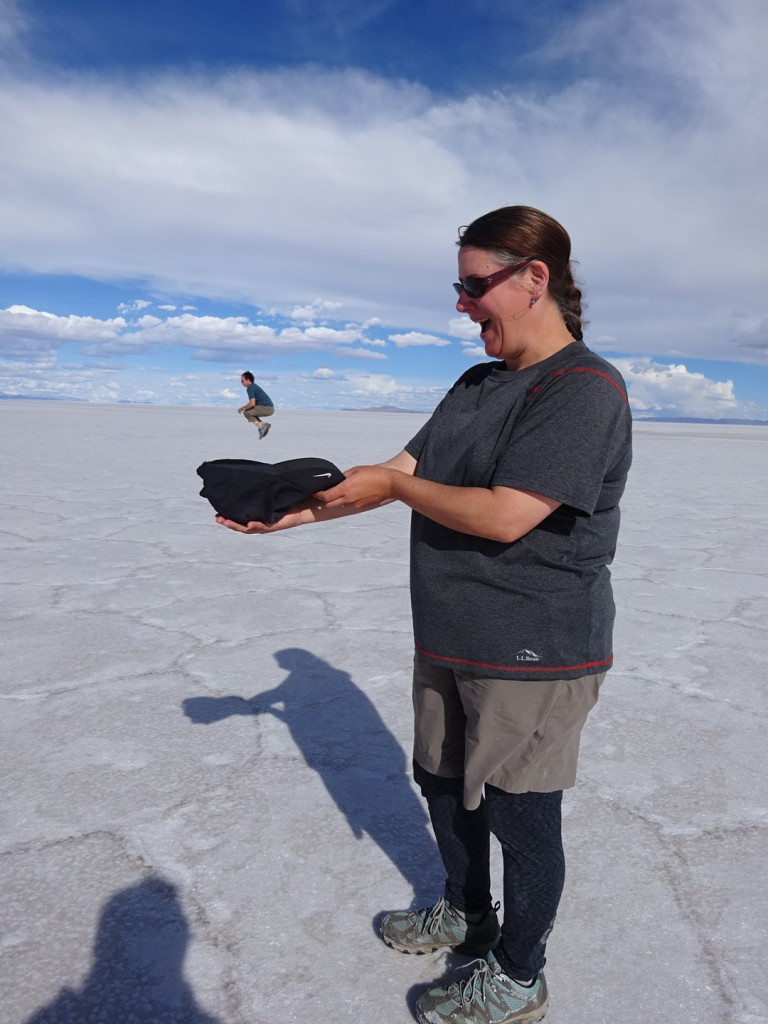 Hey! Look what I caught!

Anner as the Sun Goddess… 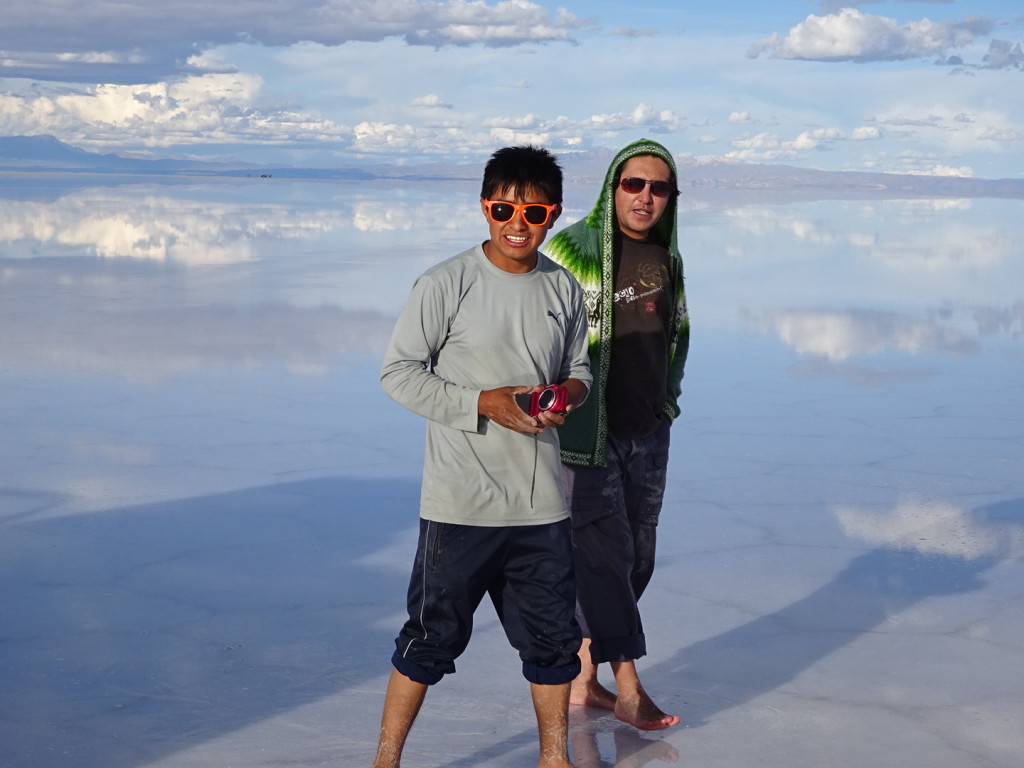 Orlando (front) and Bismar, our AMAZING driver and tour guide. Seriously….you can tell from this one picture that Orlando is just one of those positive people that you don’t get enough of. Love these guys! 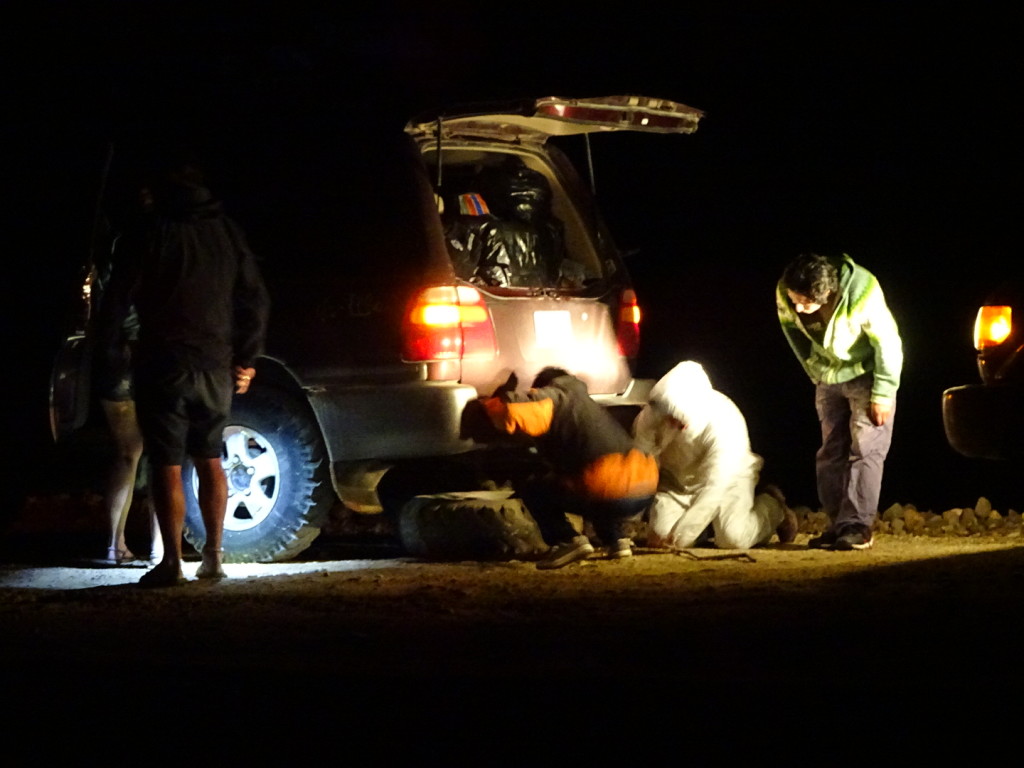 A quick change of the suspension. It seriously took them only about 15 minutes to fix the car while we watched the stars.

An unsolicited word about our travel company: we booked with Red Planet using Kanoo as our travel agent. We cannot overstate how professional and excellent they were – nothing like the horror stories we heard about drunk drivers, broken down on the side of the road and no food or water. I am certain our ride on the tour was the safest we have had since leaving home, the food was some of the best we have eaten on the trip, and even though we had a truck break down (very common in Bolivia), the drivers fixed it fast. Since we were in a caravan, we always had a “buddy system” so no truck would be left alone. Our guide, Bismar, spoke excellent English and had an incredible body of knowledge about all of Bolivia. Our non-English speaking driver, Orlando, broke the language barrier with his super-high-energy, incredibly positive attitude, a never-ending smile, and safe driving record. He even stopped to show us his native flutes and let us try playing them (I’m the only one who successfully made a flute-like noise with them. Yeah! I’m a winner.) We HIGHLY recomment Red Planet. Just be careful to not end up on the truck with the cranky-franks. 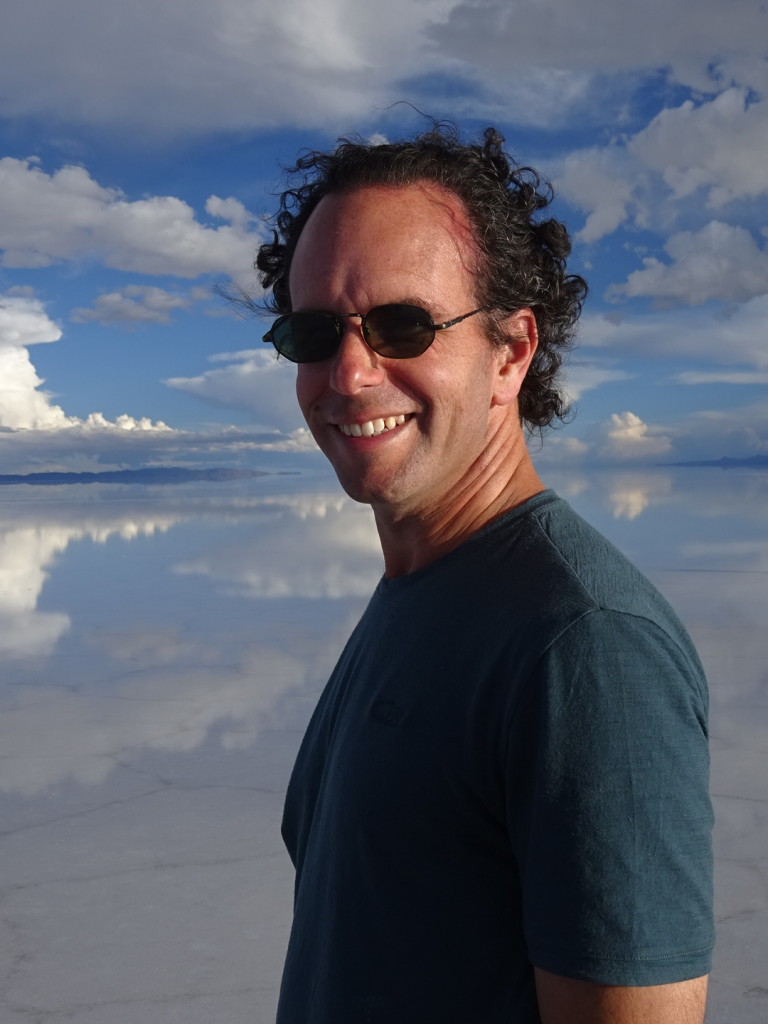 Starting with my handsome fella. 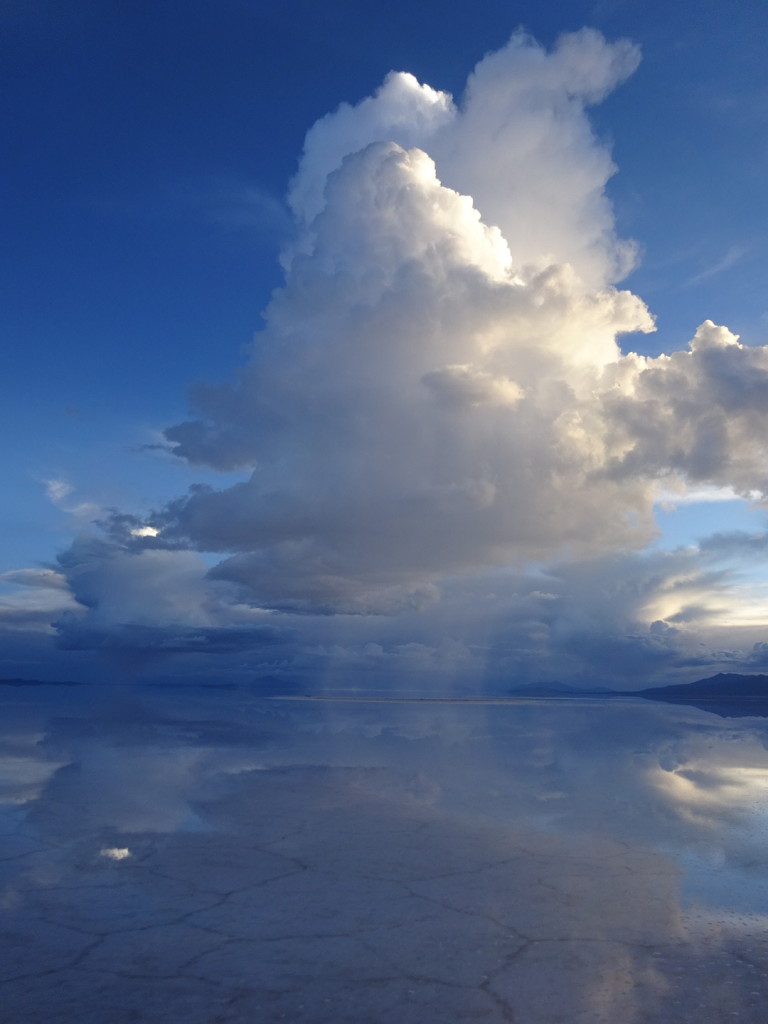 Look carefully and you can see the rain coming out of this storm cloud. 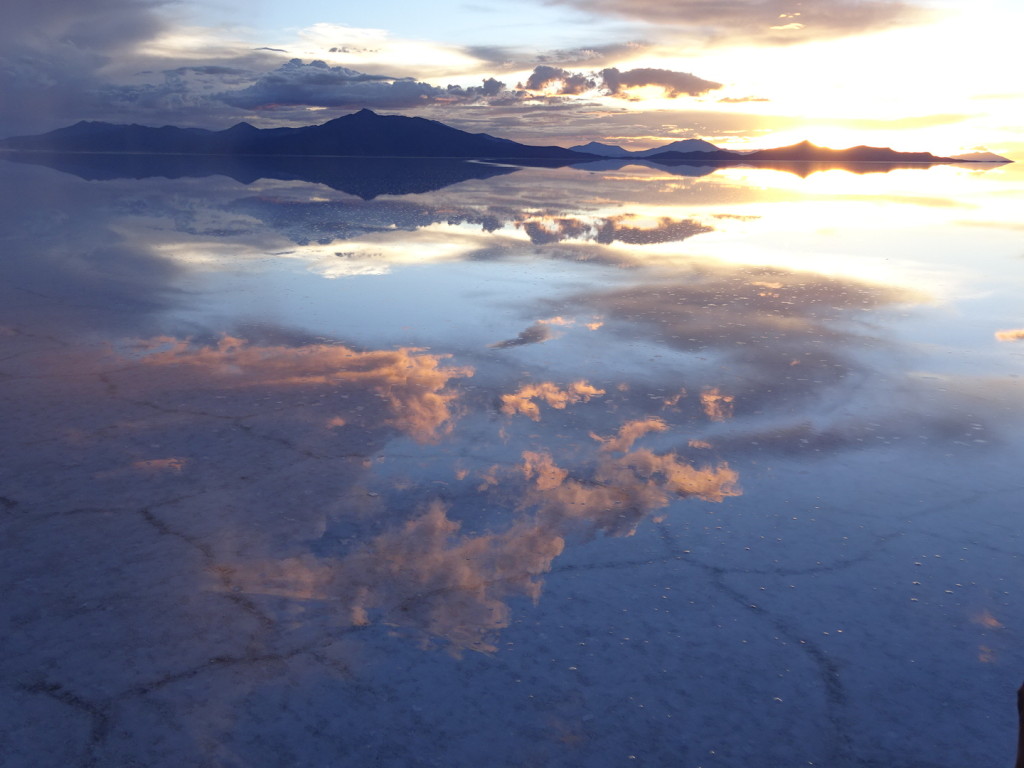 Mirror mirror on the… salt flat… It was really neat seeing the big crystal structures the salt formed! 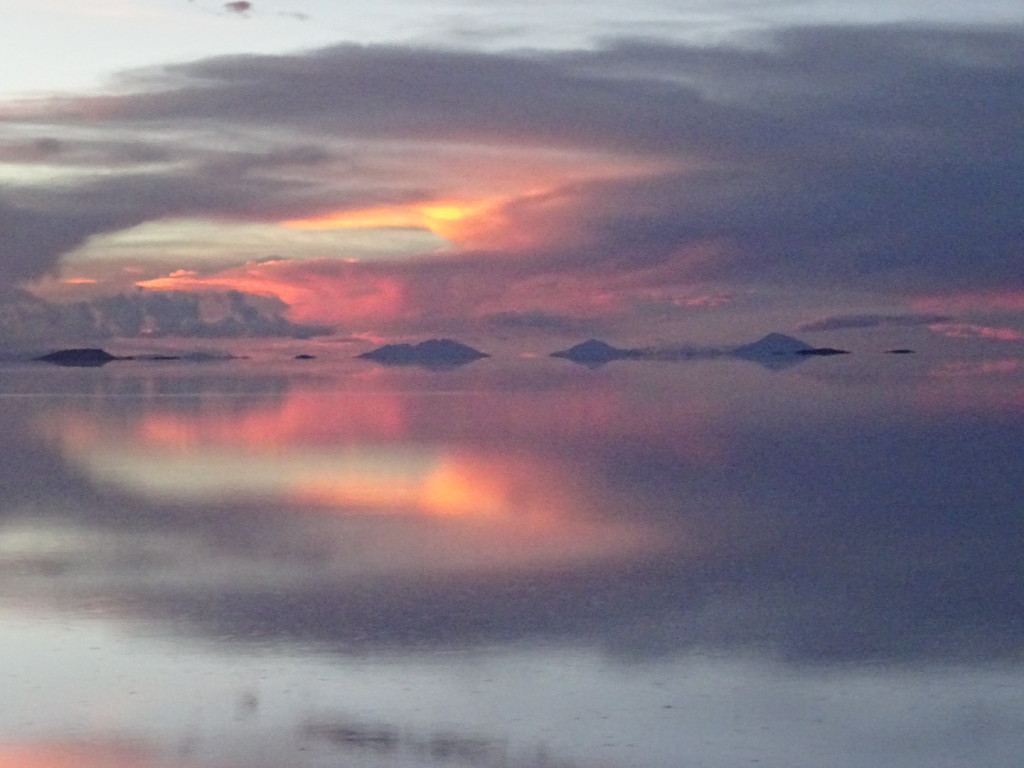 The sun setting was GORGEOUS! 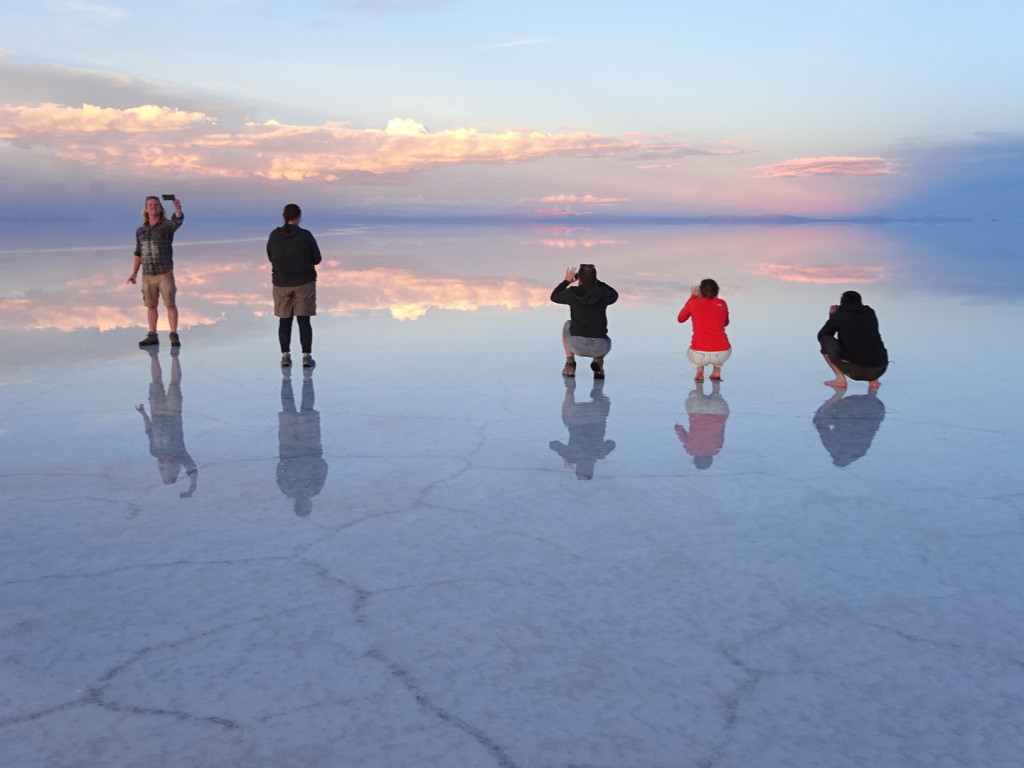 Because the scenery was so unbelievable, we and our truckmates were just beside ourselves. At some point we decided we had to join the cranky-franks and “complain” with comments like: “Awwww, I thought I was going to see unicorns! …When will it rain glitter? I was promised GLITTER!… If I don’t see a Pegasus, I’m leaving a bad review online!” We cracked ourselves up!!

It’s finally almost the end of a truly magical day… 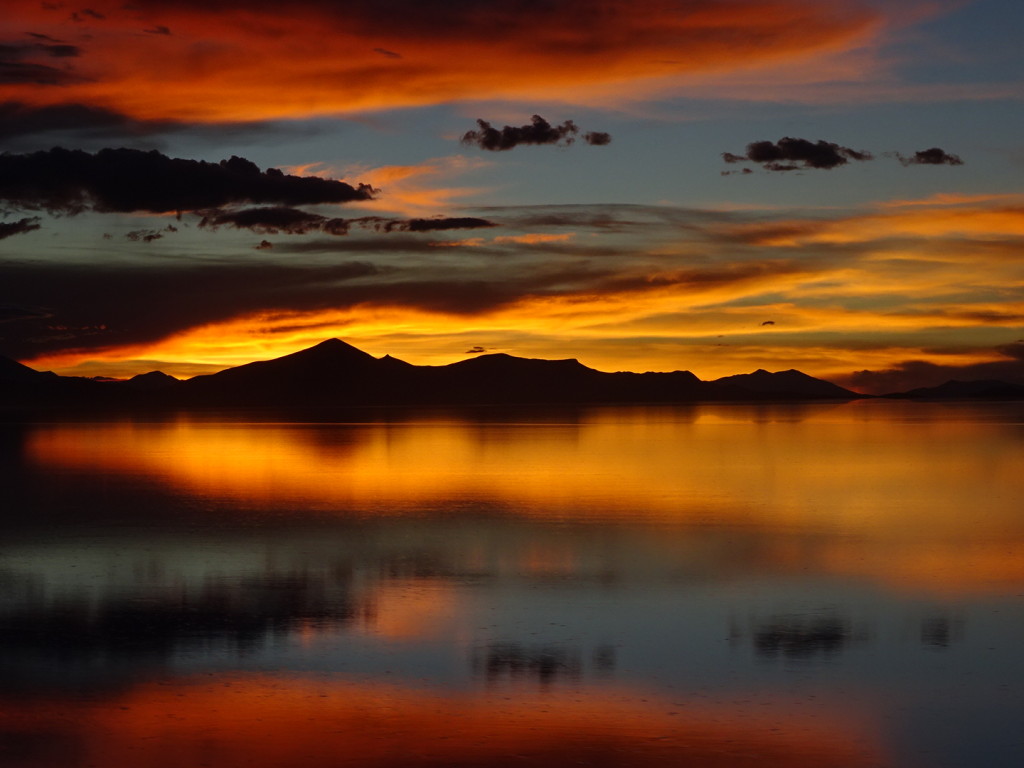 …but there was just a bit more magic up nature’s sleeve! So lovely. 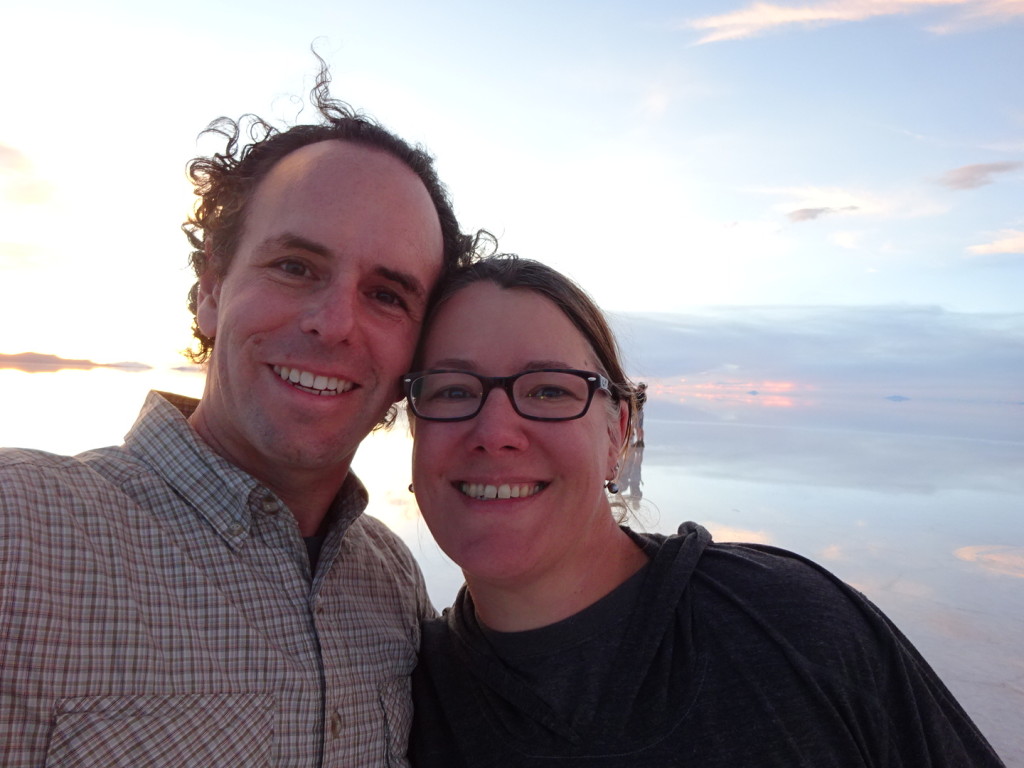 Seriously one of the best days together since we met. Just beyond words.