So this is what they mean by “As far as the eye can see.” From horizon to horizon and as far back as the binoculars show: wildebeests, wildebeests, wildebeests! Thousands upon thousands upon THOUSANDS of wildebeests. Seriously. Lots! Every year over 2 million wildebeests, along with an entourage of zebras, lions and others, make a large circle migration path around east Africa, all in the search for water. You never know where they’ll be since they are always moving, but we were truly lucky enough to land in the right place at the right time to surround ourselves with gnus on the hoof. Thanks, Brian! 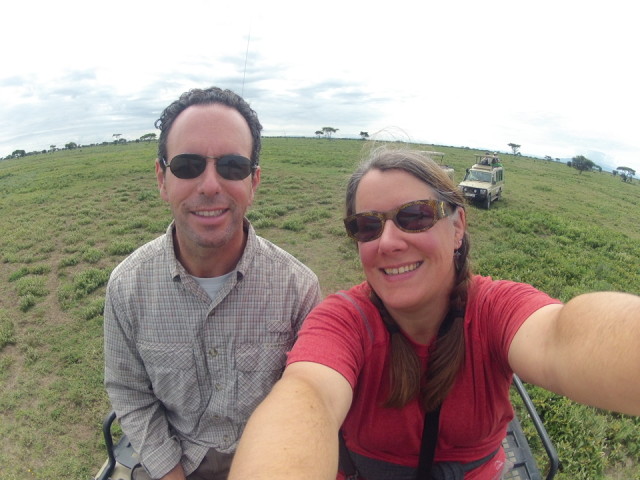 Perched on top of the jeep just watching wildebeest.

At one point our jeep was out in the middle of the plains with wildebeests totally surrounding us. Brian, our fearless leader, asked everyone to not talk and we took a few minutes in silence to simply soak in the experience. Animal snorts and grunts. Hoofbeats. Head butts as the animals tussled. Unreal. Breathtaking is the only word I have for it. We really hope you have the chance to book your own safari and see it in person.

Such thin legs and that beard…they really are interesting how they come together.

While we saw wildebeests nearly every day, it was over the course of two days that we saw the really massive herds. On Day One we drove to the top of a plateau and watched them gather. It was quiet and mellow. Some of the wildebeest seemed playful. They ate, wandered and grunted while we watched for an hour or two.

…where the wildebeest and the zebra roam…

And they watched us:

Two quick videos from Day One. The first shows a couple of wildebeest up-close and wandering about. The second shows the herd gathering and gives you an idea of how massive it is.

On the evening of Day Two they were running. Sometimes walking, but mostly in full-on sprint! It went on and on and on…for hours. Yep, The Great Migration was in full swing! Like the ticker below the cable news, the wildebeest were in constant motion in the background. “Look at the leopard! Oh! And more wildebeest in the back…” Like that! Here’s a video of the wildebeest running.

It’s not blurry, that’s the dust they kick up running!

It really felt like what it must have been like when the buffalo herds migrated in the US before the Europeans arrived. Spectacular! 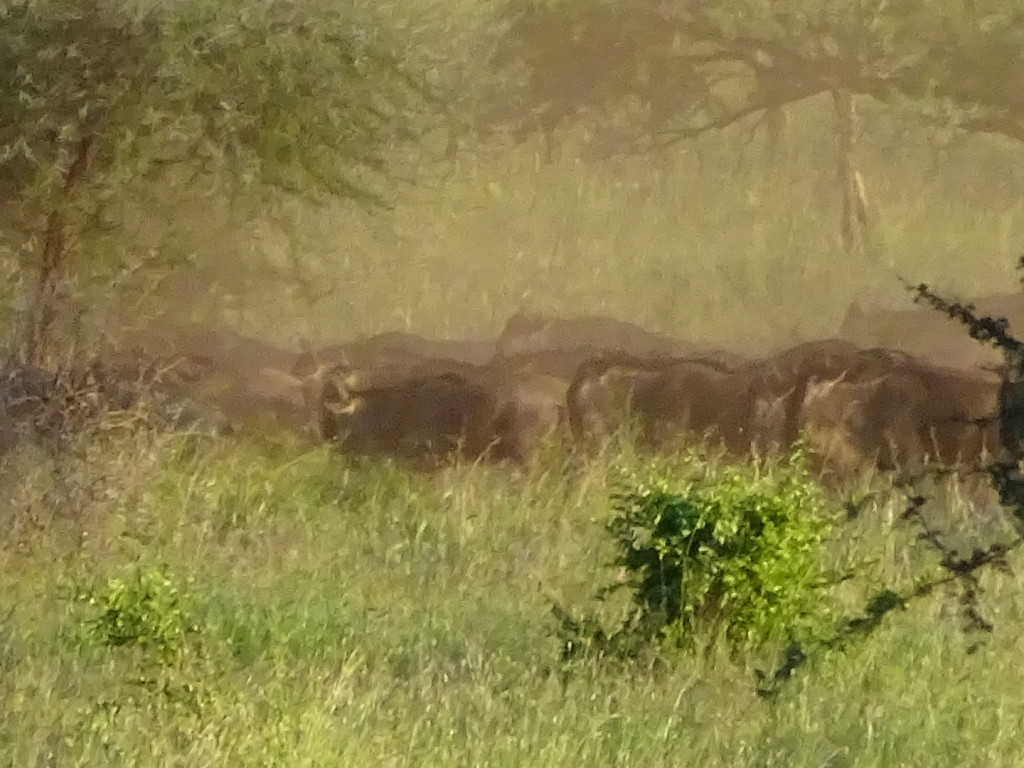 My favorite scene from that night: after watching thousands of them run by we came across the beginning of the herd, ushered forward by the zebras (they have better eyesight, useful in not leading everyone towards predators). Look back and the herd never ends…it just goes and goes and goes. 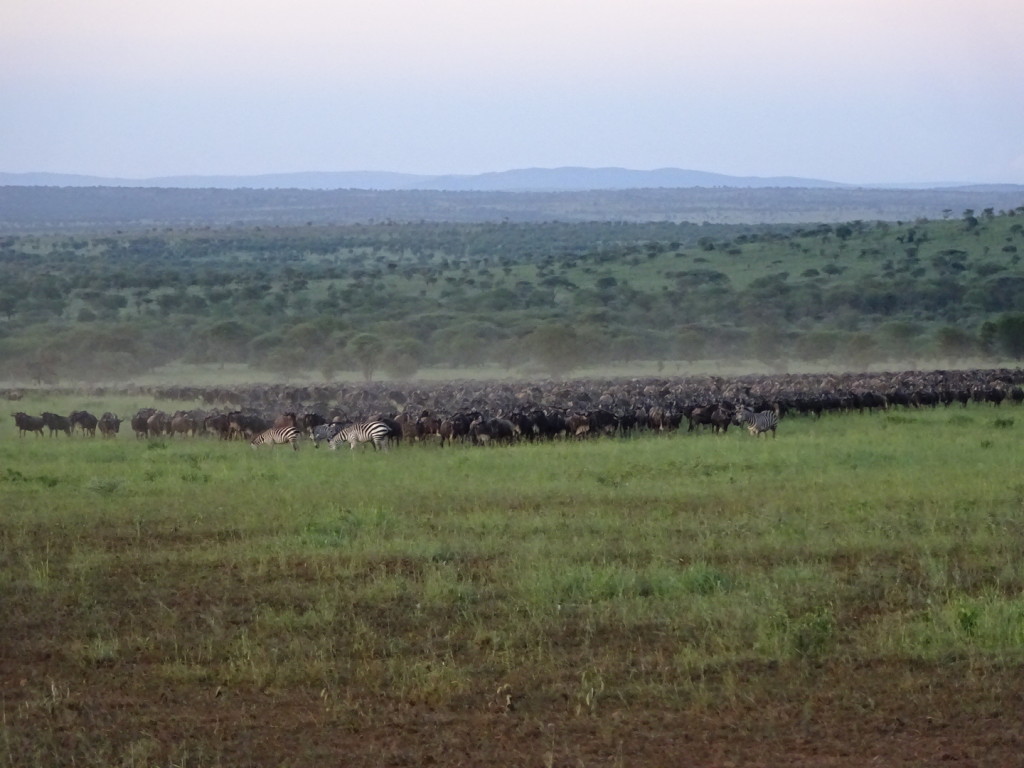 And the zebras take the lead!

And the sunset as we drove back to camp. Best. Day. Ever. 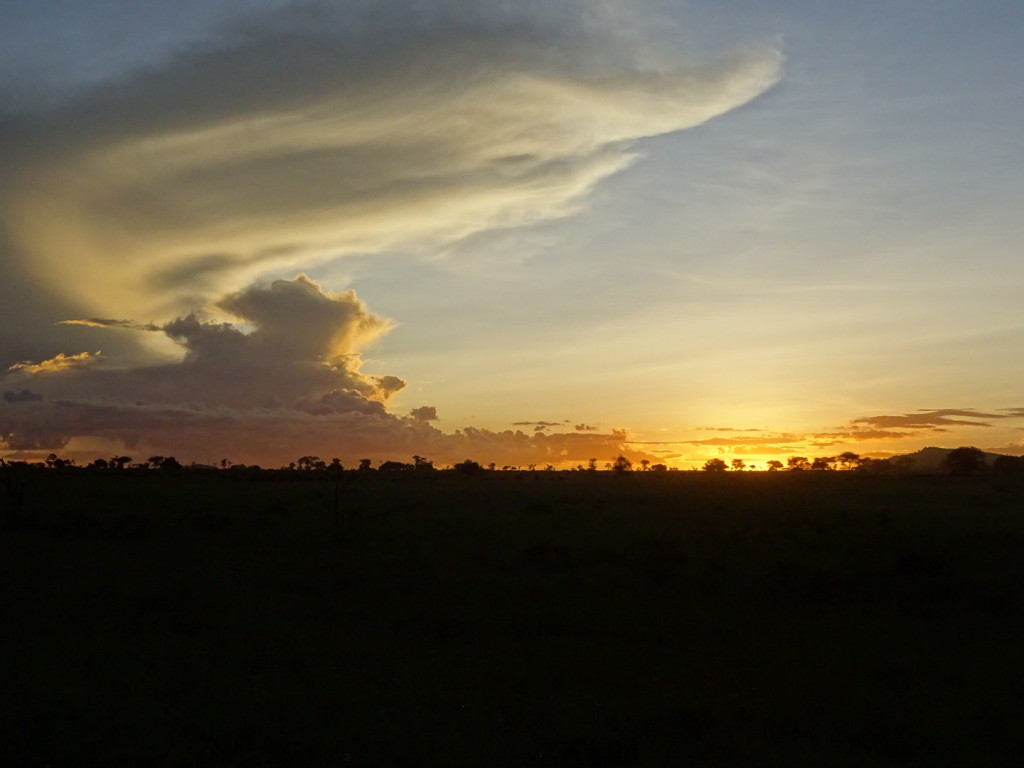 If you missed them and want to see more of our safari posts, here are links: