The difference between a “safari” and a “tour” is that a safari is a journey without a set, unchangeable itinerary. It’s open to taking things as they come and adjusting the day to create the most memorable experience. That was never more evident than when our safari took a day exploring the town of Mto wa Mbu.

As it turns out, our safari was a bit about the culture of Tanzania, not just the animals! Getting to explore the town really opened our eyes to the incredible friendliness of Tanzanians. The night before, our leader Brian told us we would walk through town and explore a few different things: see rice and banana farms, a banana-beer making home brewery, a school, painters and… the Makonde wood carvers. Hearing that, I asked Brian if perhaps it might be possible for me to take a class with the wood carvers. I had to ask, right? He said “Why not?” 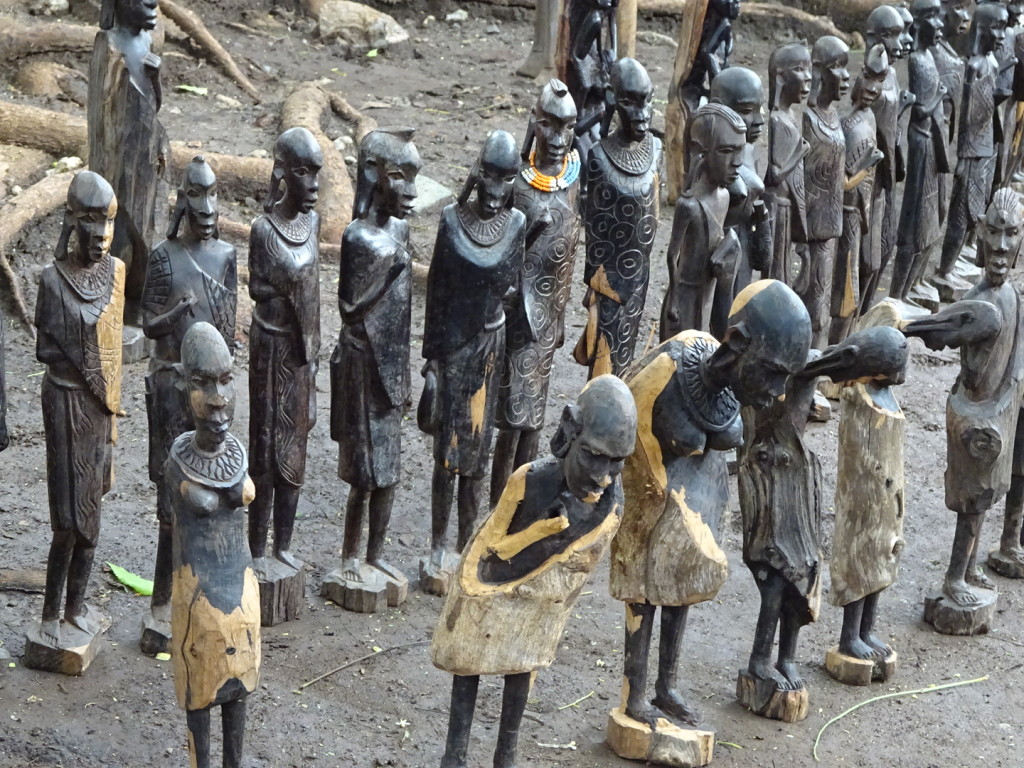 Carvings in the Makonde style.

This is the joy of doing a safari like ours with Cowabunga Safaris rather than taking a tour – we weren’t locked into staying with the group, but could make our own experience! So, when we all got to the carvers, everyone else looked around and perhaps bought a few things while Anner and I talked with the carvers about me learning to carve. Turns out they loved the idea and I ended up carving for 5 hours!!! We totally skipped lunch and I just kept carving! It was glorious.

The Makonde are a tribe known for their wood carving. It’s become the style of carving for Tanzania, which is kind of interesting as they are originally from Mozambique! They moved to Tanzania and sort of spread out around the country. Now folks carve in their style, even if they aren’t Makondes! Regardless, their stuff is pretty magnificent! 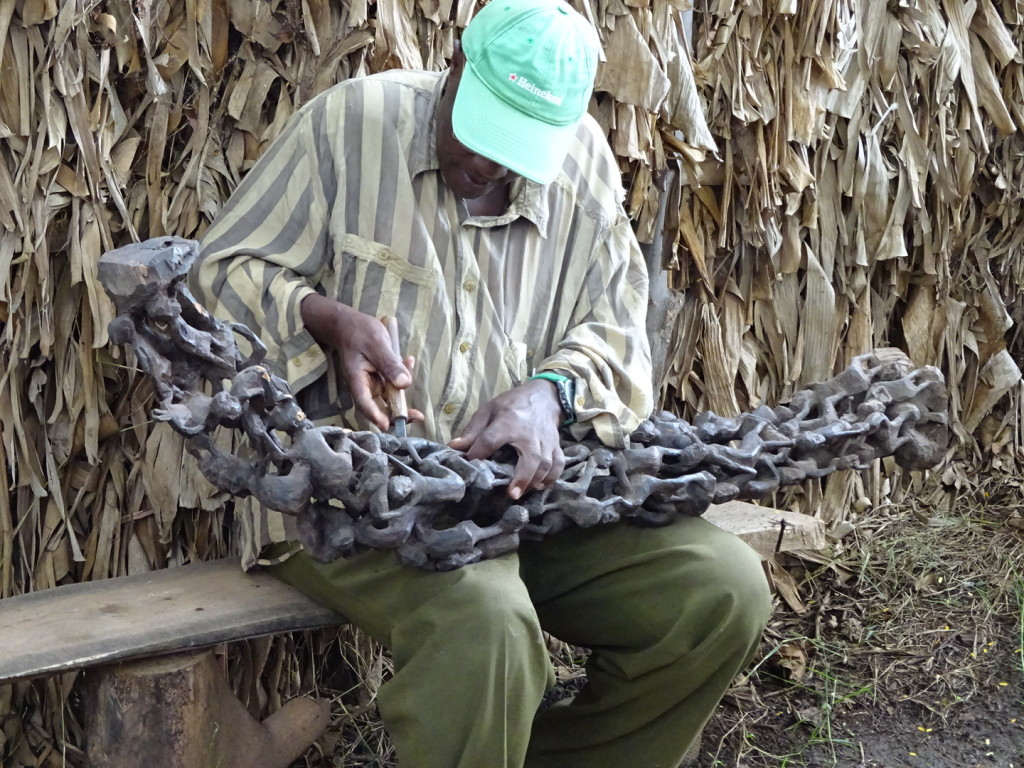 Working on a giant piece – could take about 3 months to finish!

Back to the lesson. I was set up with Mende (a nickname meaning “cockroach” in Swahili – not sure the history of the name as he wasn’t bug-like at all!) who asked what I’d like to carve. Figuring I only had a bit of time (we thought it would be 2hrs), I said an elephant. Not too detailed, was what I was thinking. Apparently that was the wrong answer! I guess they take longer than I think as I suddenly found myself working on the bust of a Maasai woman! That’s right, you heard it here first: it’s easier to create a woman’s bust than an elephant. Who’da thunk? 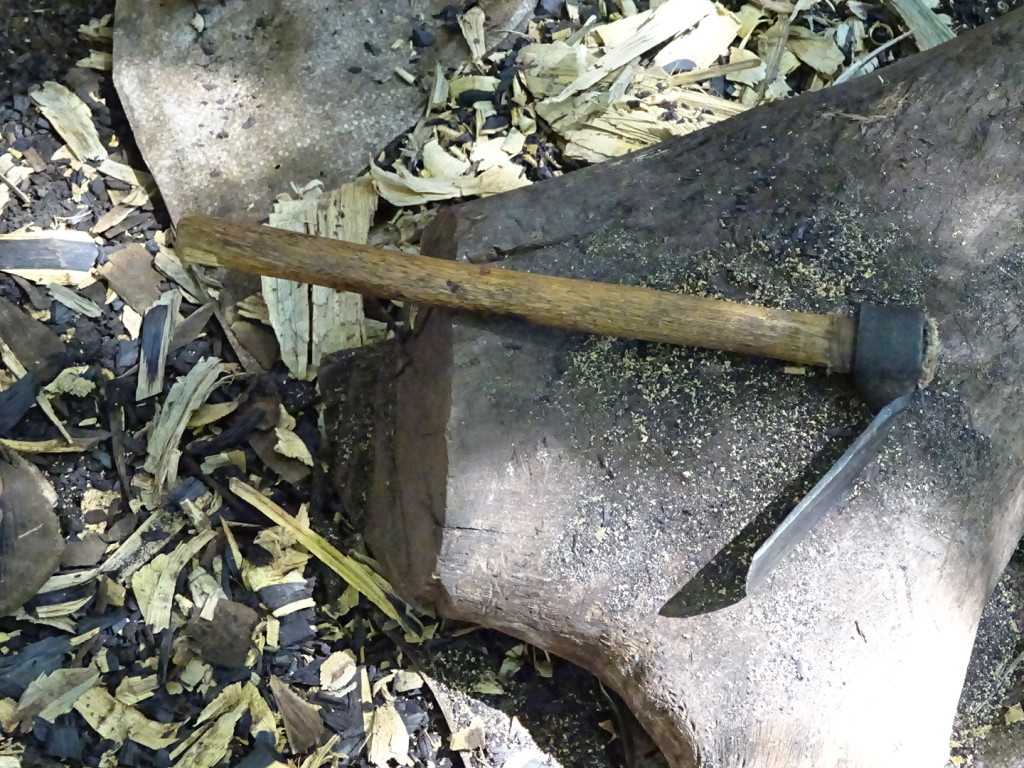 My main carving tool before switching to chisels for the finer details.

Well, to get started I had to carve the bark off a log of ebony. That’s right, a log. It hit me that this was going to be REALLY different than in the US where I’d have gone and bought a board or block and just started carving. No, here it meant taking a log and getting down to business. 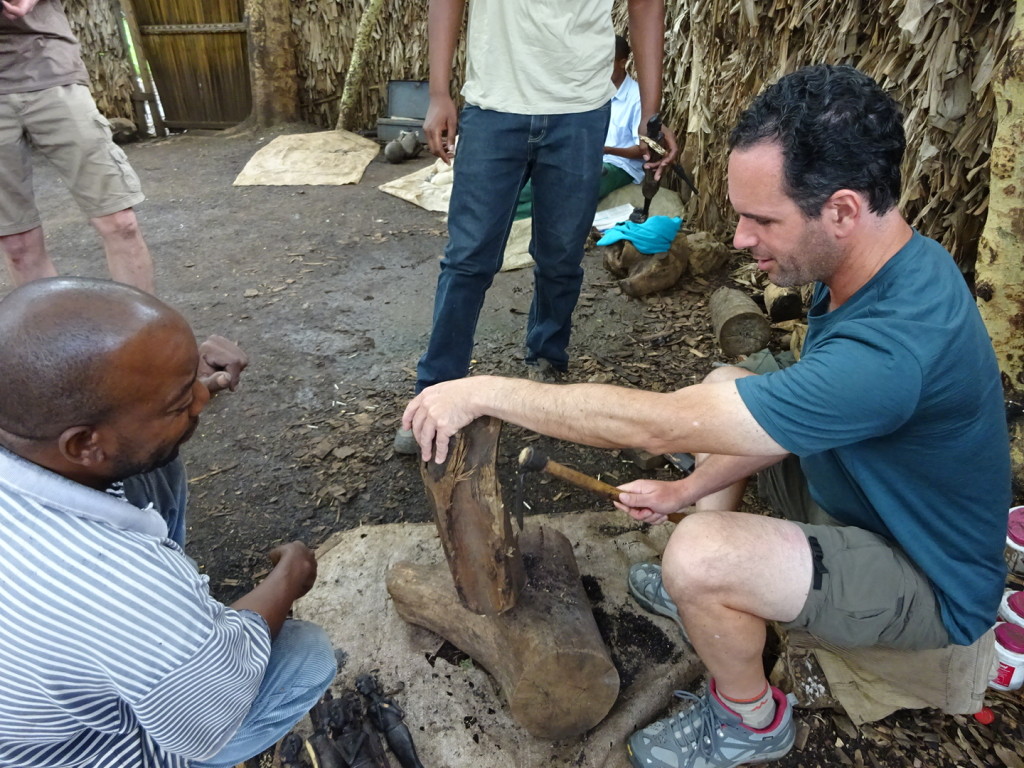 And here’s me… Just a bit of a difference, eh? I got more confident as I went along, though – promise! In fact, after awhile they were complimenting me saying that there had been some volunteers down from New York awhile back (could have been last year, could have been many years ago – time is pretty fluid here in Tanzania) who simply couldn’t get things at all. I was WAY better. Just look, I even got a smile from my teacher when he realized I was doing something right!

Mende could stand back and smile when I finally got something right!

As I worked, Mende would show me a bit, let me work on an area, then take the piece back and do the same area more. It was a smart way to do things – I could start things and get a sense of them without doing any unrepairable damage! (video) As the afternoon went along, things began to take shape. The basic head and ears, the necklace…it all started to click. 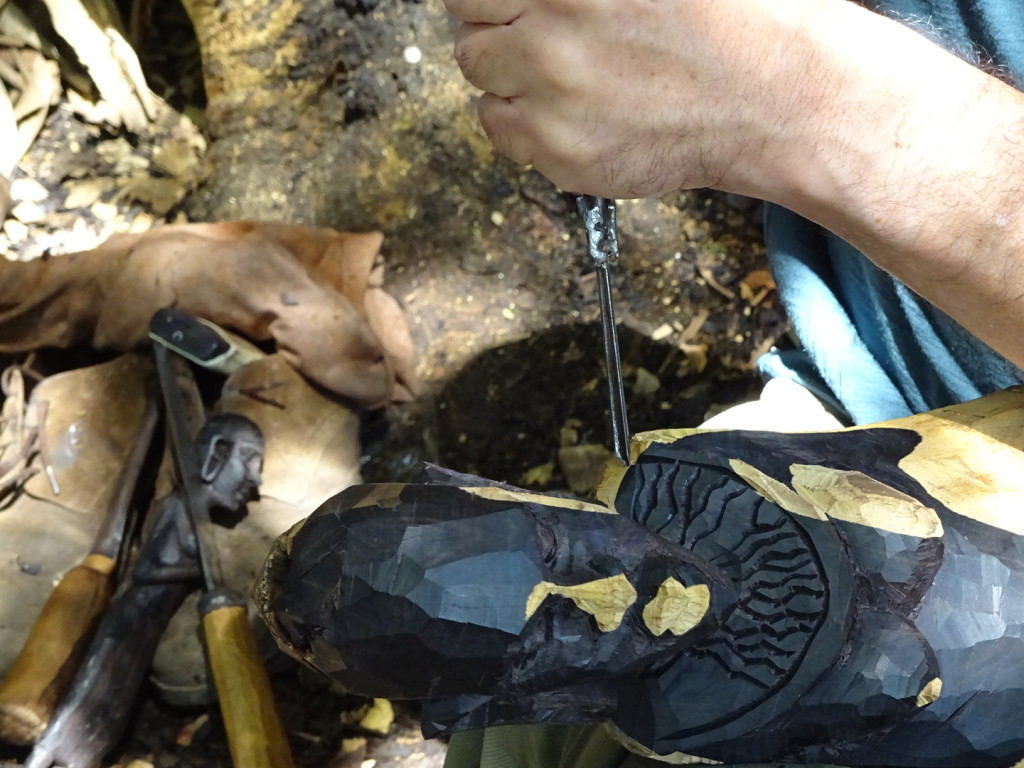 Making the necklace decoration – this I actually did on my own!

Folks kept coming over to watch. Aside from simply being unusual in being a white person carving with them, we were also the first tourists to stop by the carving shop in 3 months! When they talk about a slow season here in Africa, they really mean it! 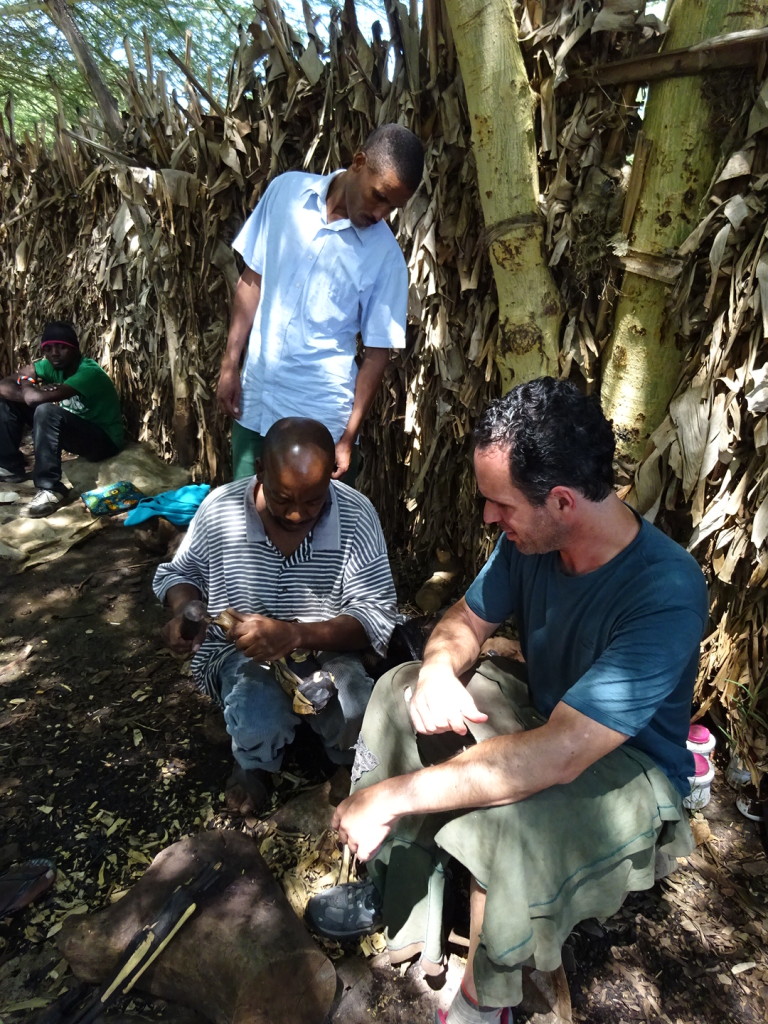 Everyone wants to see what that mzungu (white person) is doing!

Five hours, lots of chopping, a LOT of help and a ton of fun later, I had my bust! It’s not really done in the Makonde sense – it’s still all chisel planes and has a huge crack to be glued back together, but it stands as the perfect reminder of my experience with the carvers. Well, I might glue it, just so it stays together for life, but otherwise I’m leaving it as is. 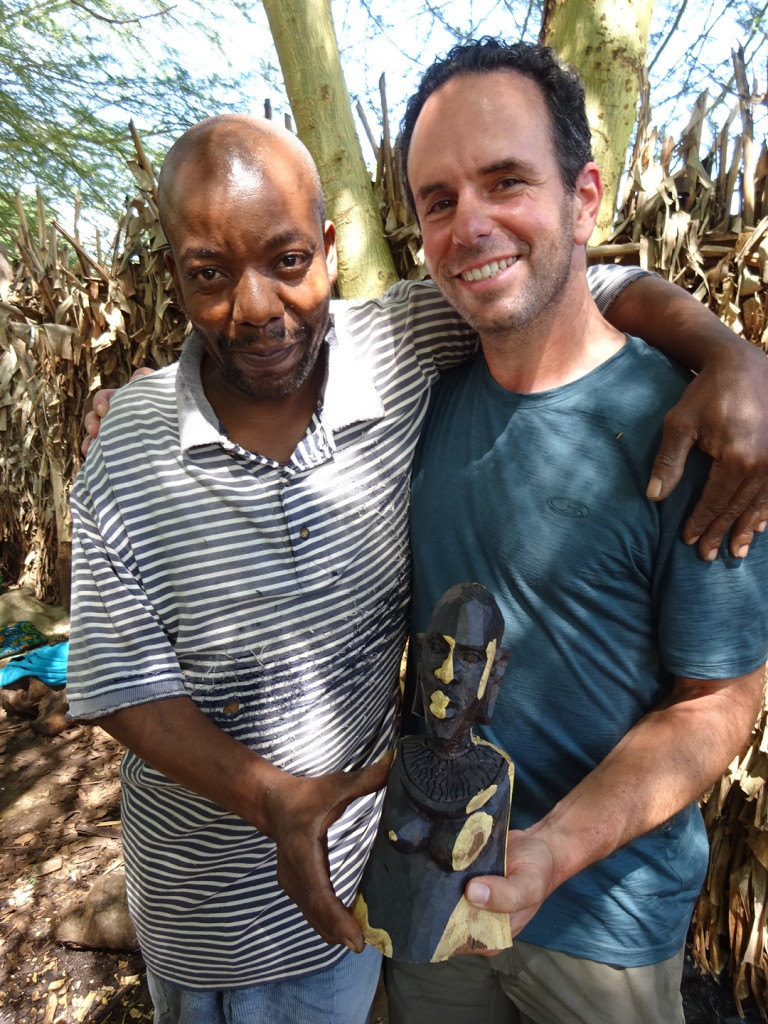 Mende, my sculpture and I!

When we caught back up with the rest of our safari group, everyone asked about the experience and wanted to see my piece. I decided that the best thing to do was to give a talk about it all during dinner that night! Yep, I put all that experience with the Seattle Metals Guild Lecture Series to work and did my own little lecture! 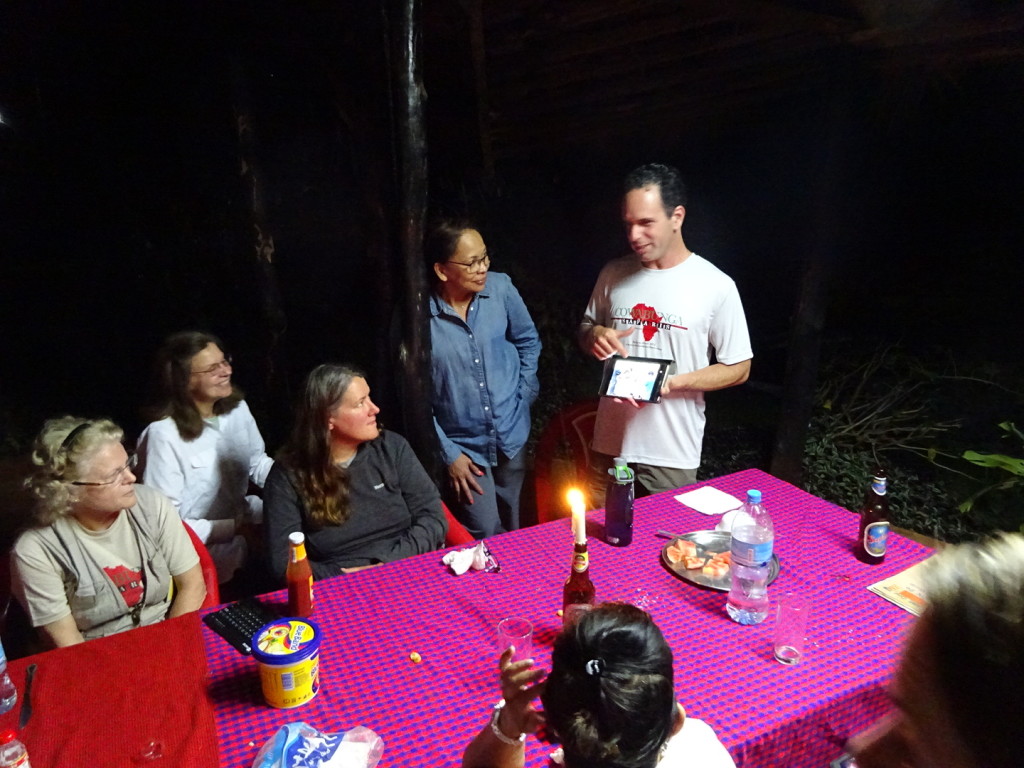 I enjoyed being the night’s entertainment at camp.

It was great fun and now I’m looking forward to giving more in the future. Once again, one of those wonderfully unexpected additions to our safari.