Aaron Paints Some Walls … And A House!

Since we’ve been home, I’ve been exploring ways to become a tiny, tiny part of the street art scene here in Seattle. First we went and met with the director of Urban Artworks, an organization that works with kids in a justice program helping them learn skills rather than get jail-time for small offenses. The kids come in and help create murals that are contracted for around the city. Pretty cool stuff! Urban Artworks also sponsors murals by visiting artists and others simply with their own staff and volunteers… and that’s sort of where I come in! 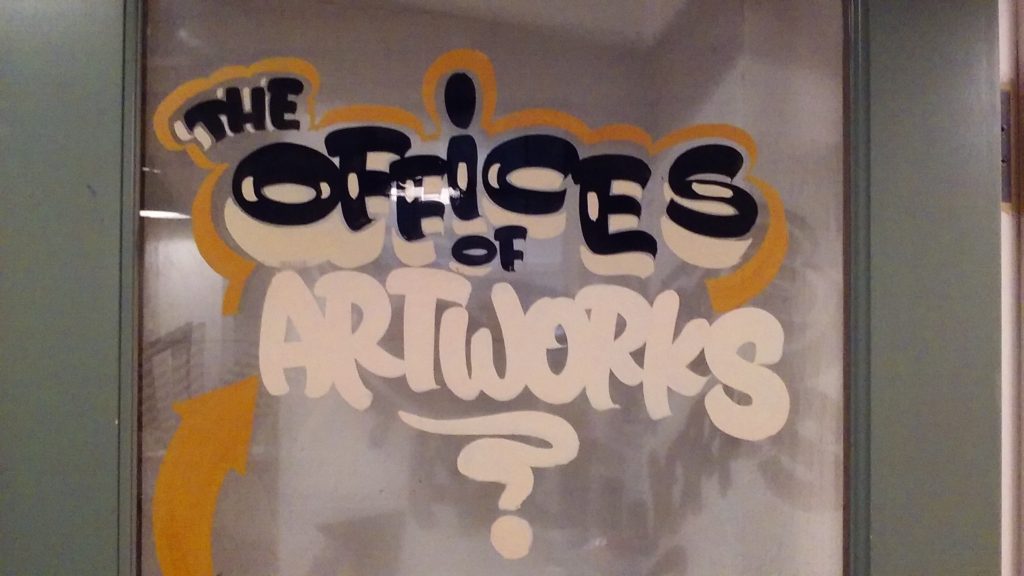 The offices of Urban Artworks.

As I type this, a looooong mural is being finished up for the Amara Foster Care Service. Amara designed it and contracted Urban Artworks to create it on 4’x8′ plywood panels which will be hung on a 104′ long driveway later this week. That made for a LOT of panels to be painted, and yours truly helped out one day. (Update: check out the blog entry on Amara’s site here to see more photos including the kids working on it and some of it installed) 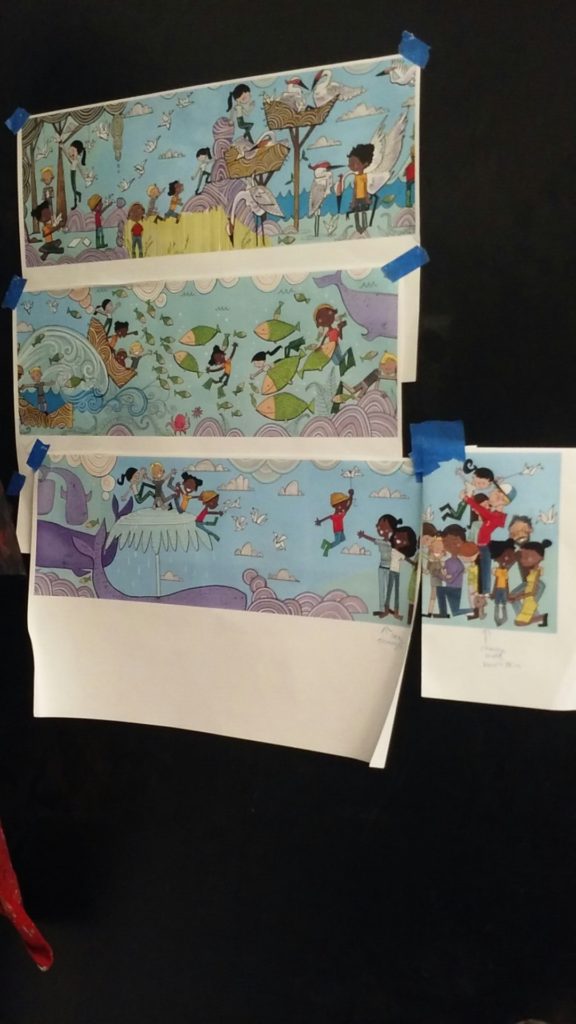 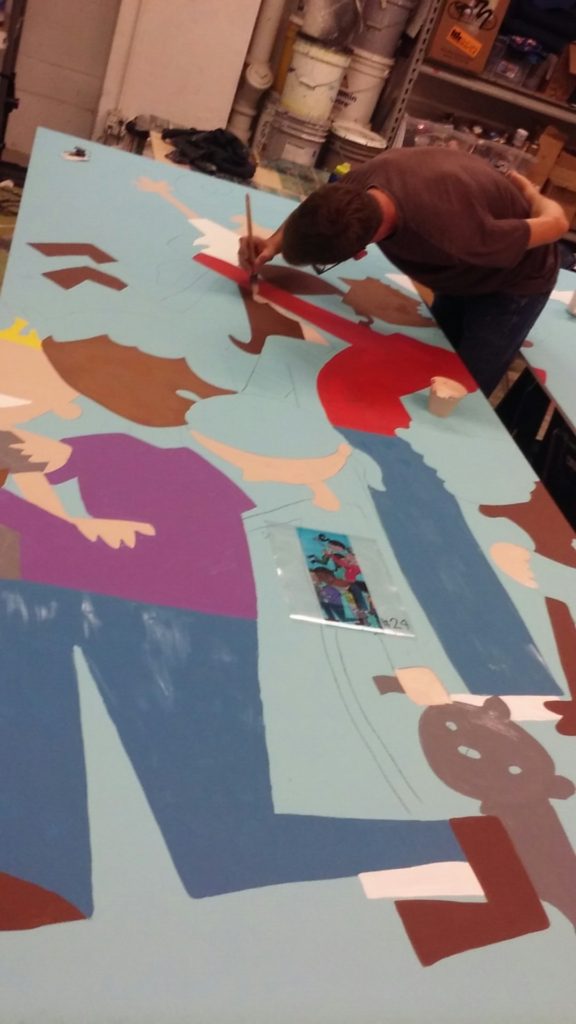 Working on the panels in the Urban Artworks studios. 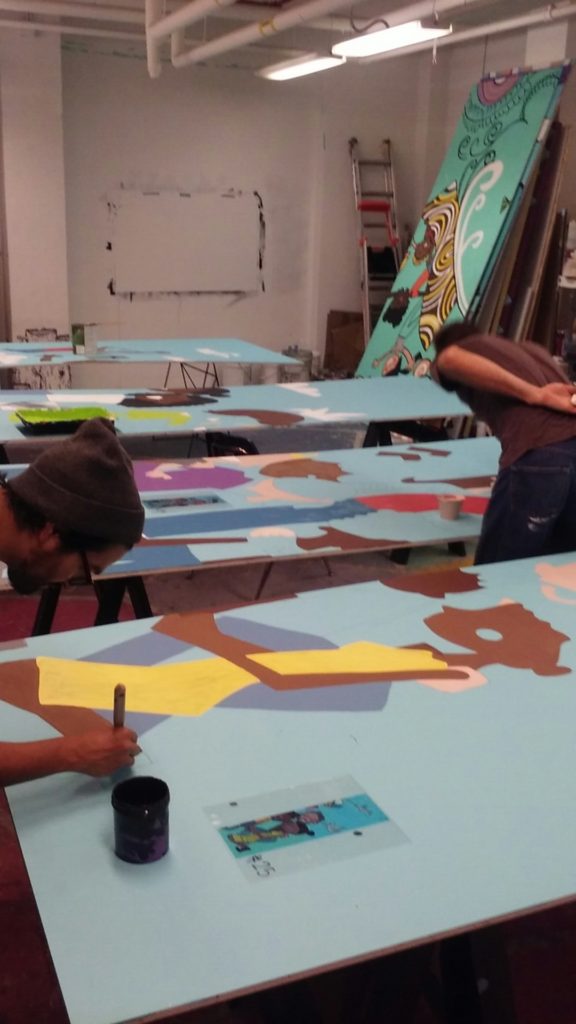 I’ve also gotten on Urban Artworks’ mailing list to help on new murals going up around the city. About a month ago Treason Gallery and UA brought in a bunch of street artists to create new works here in Seattle and asked for volunteers to lend a hand for a day. What did I do, exactly? Well, basically I painted these brick walls white. 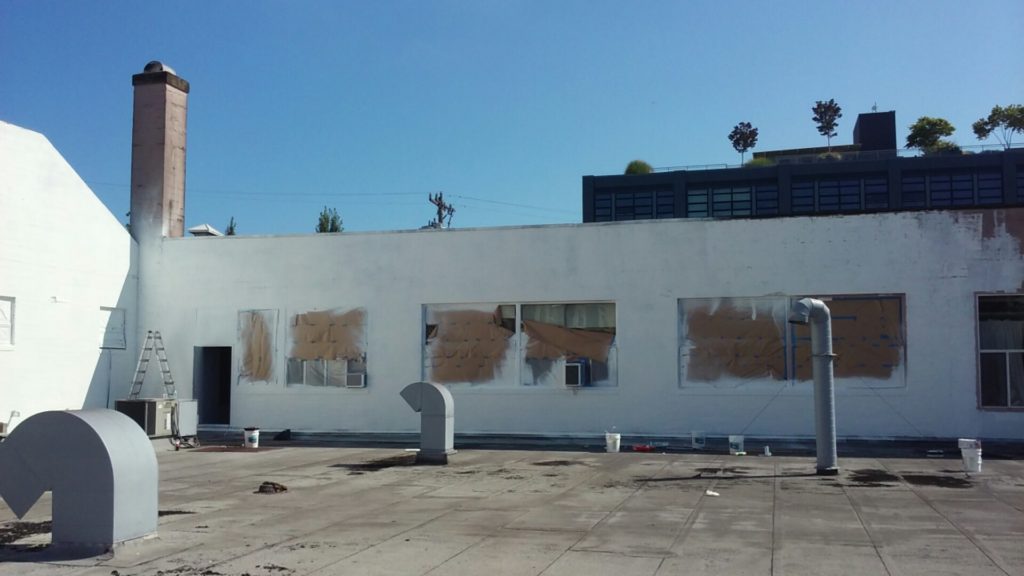 This is the 2nd floor rear of the Richmark Label Building at 11th and Pine. 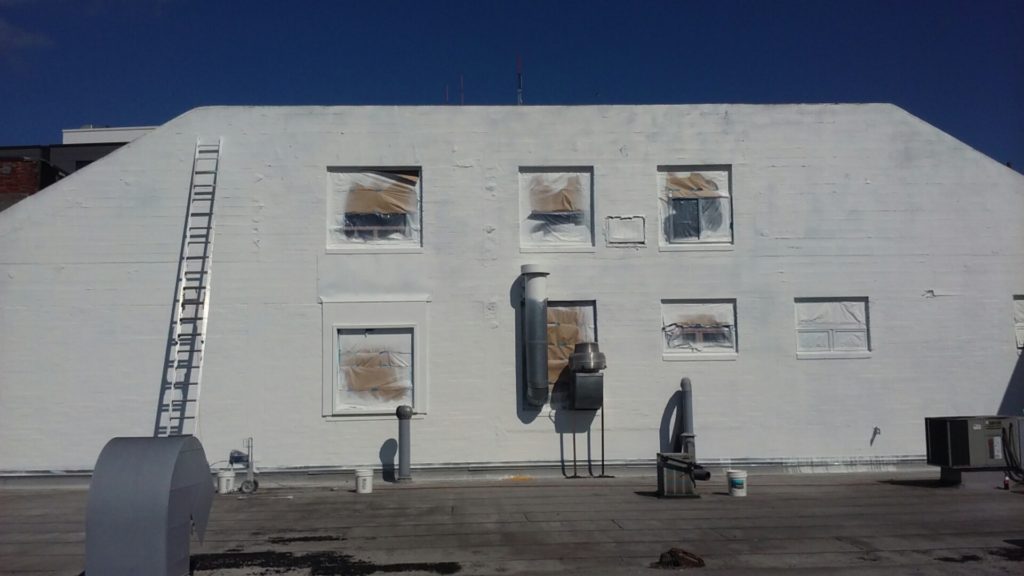 Big ladders, a sprayer and rollers on extension poles were all involved!

Yep, not too glamorous, but it sure was a big job and I felt pretty good about it. Felt even better after the artist, Bisco Smith, came in and did his work! As you can see, my white becomes an integral part of the design since he only works in black and white. Look, ma, I’m a street artist! 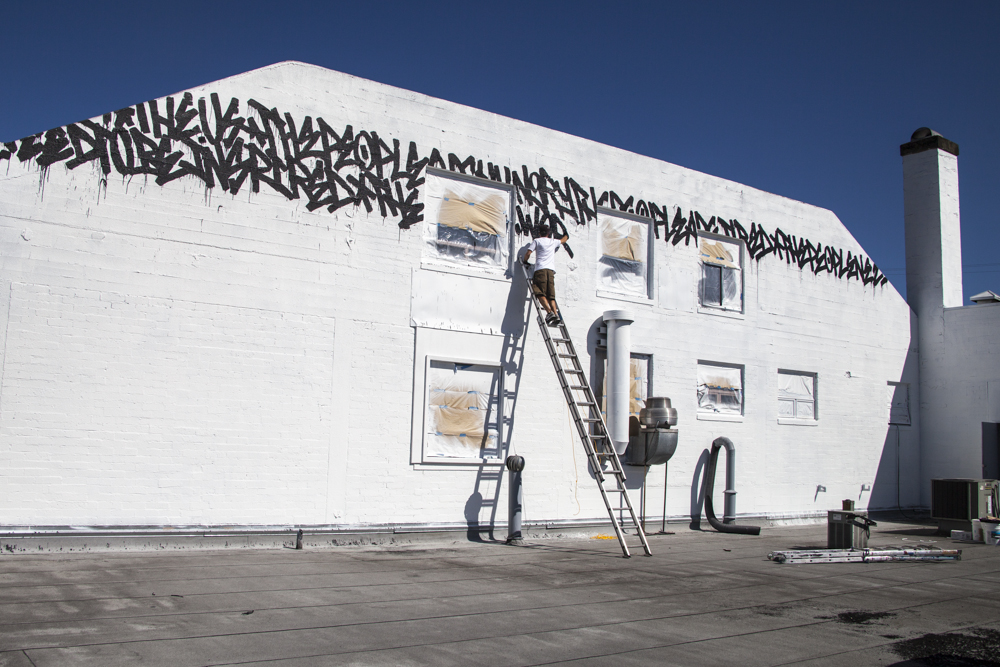 Bisco getting started on the piece. (photo courtesy of Treason Gallery)

Bisco’s creation! Afraid you may have to zoom in to read the writing…

Pretty cool, eh? Just for fun, working down below was Daniel, a Canadian who goes by the moniker of Denial. He was doing some great stuff with spray paint. 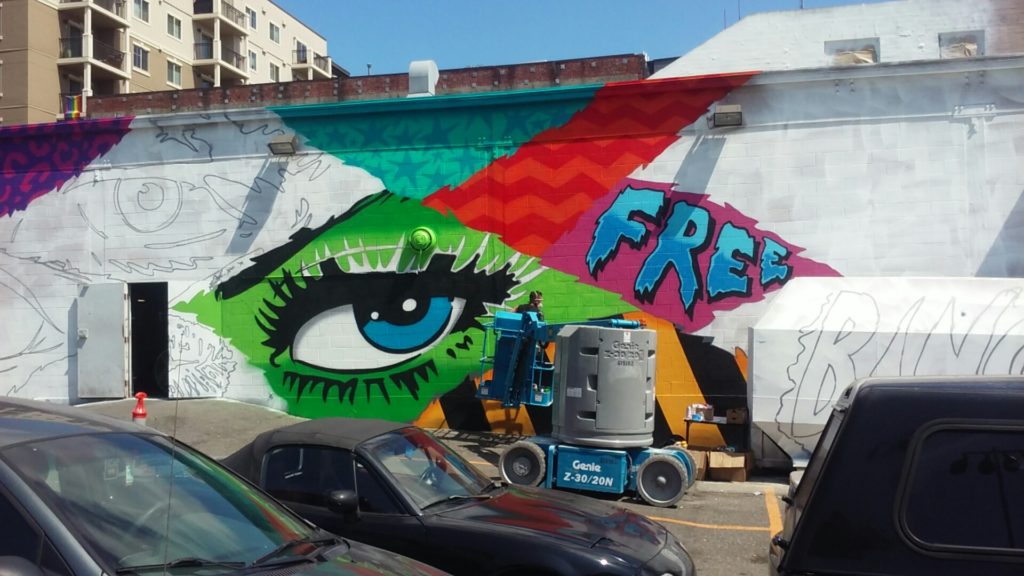 The eyes have it in this piece by Denial. 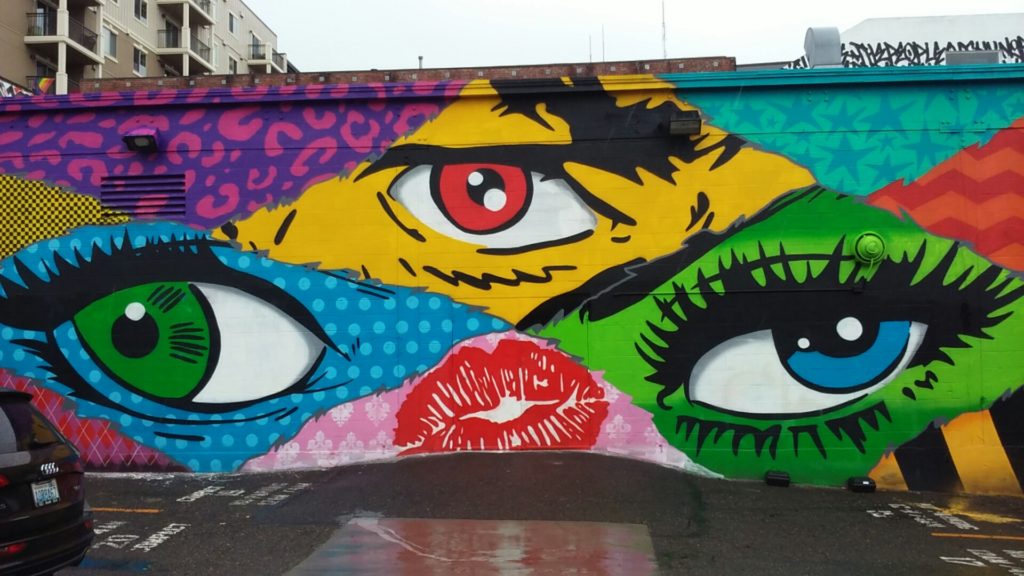 Here it is finished. You can see Bisco’s peeking out in the back.

Well, with painting like that under my belt, I took on my most ambitious project yet – painting the outside of our house!!! It’s not a big home, but I think you can see that it needed some TLC.

Now why would we want to change from battleship gray and teal? 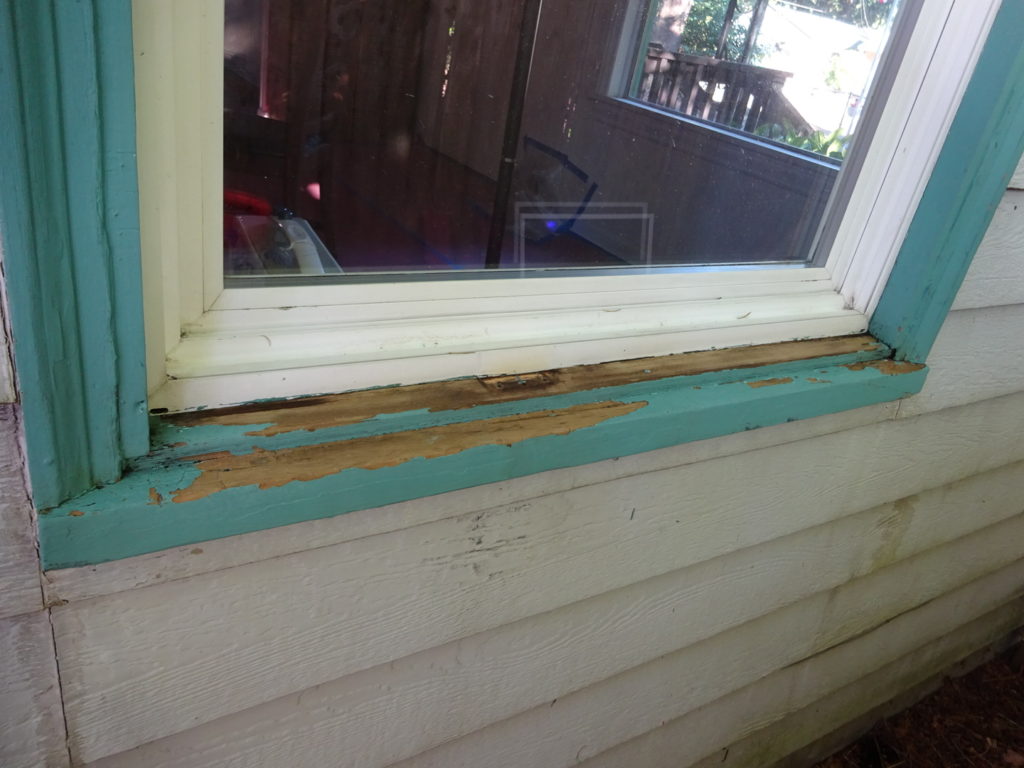 Bare wood and no caulking is not a good combination for rainy Seattle!

Lots of the window frames were down to bare wood, siding was cracked and rotted in places, electrical covers were missing, caulking was almost non-existent … just a bunch of little-ish repairs that had to get done before the painting could even happen. Happily all done now and, with the help of a neighbor, the house is glowing in it’s new colors! 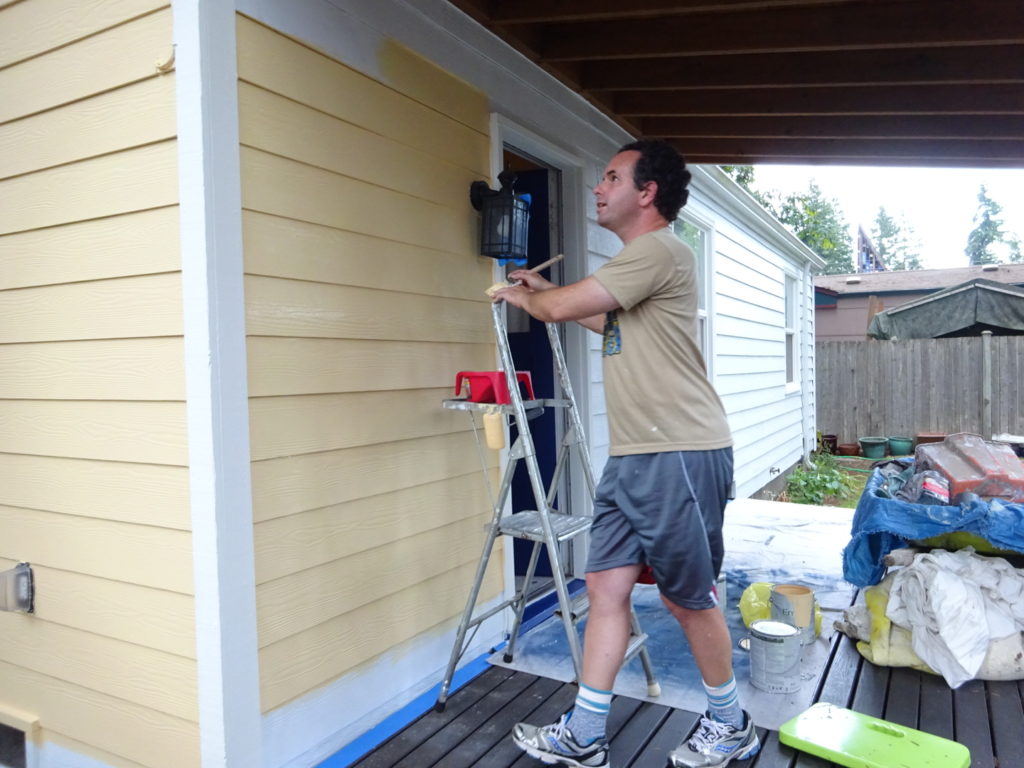 See? I really did do the painting myself! 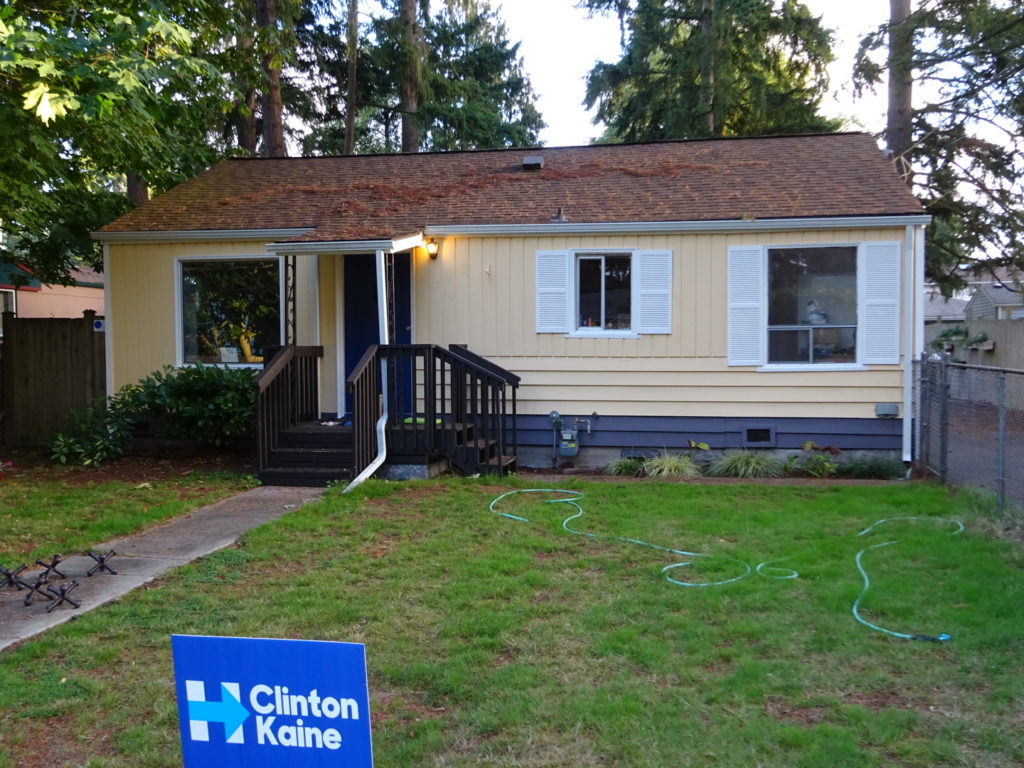 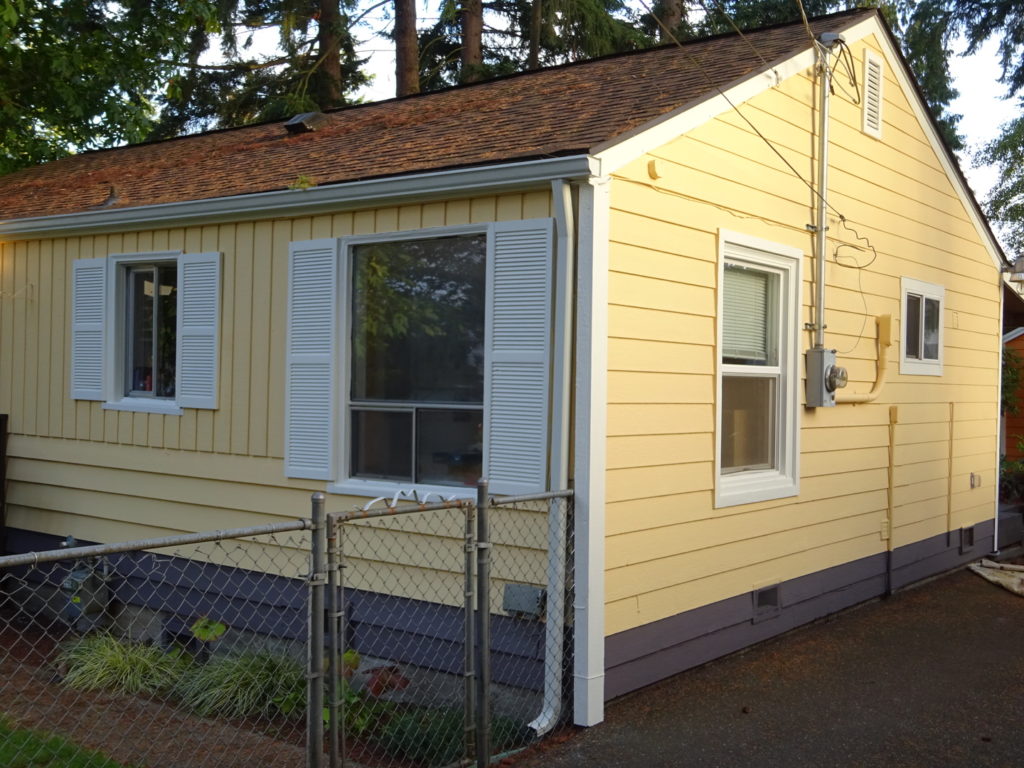 And I didn’t even stop after just one side. Nope, did all four.

In case you’re curious, that’s Stunning Shade on the bottom, Honey Blush on top, Westhighland White for the trim and Commodore Blue for the doors – all from Sherwin Williams. Soooo much better! But we’re actually not done yet! Nope, we plan to street art-ify this baby. Maybe Anner and I don’t have the talent of some of the artists I’ve posted about before, but I think we’re going to do our own thing and make it look quite nice. Or, at least, quite unique. It’s only paint, right? Right! Stay tuned……..