It’s so interesting to me that all the photos posted of street art around the world are really just snapshots in time. As you read this, these works might already be painted over or simply worn away! The internet sure helps with keeping these transient artworks alive and this little memory presents part two of the pieces we enjoyed in Amsterdam during 11 days in mid-January, 2016.

There’s one block in town that was known as the Street Art Museum. Basically it was a bunch of abandoned buildings that had been completely covered with art. Unfortunately the city had recently shut things down there and put up fences in preparation for demolishing everything. I took some shots through the fence, but I wonder if any of these still exist? 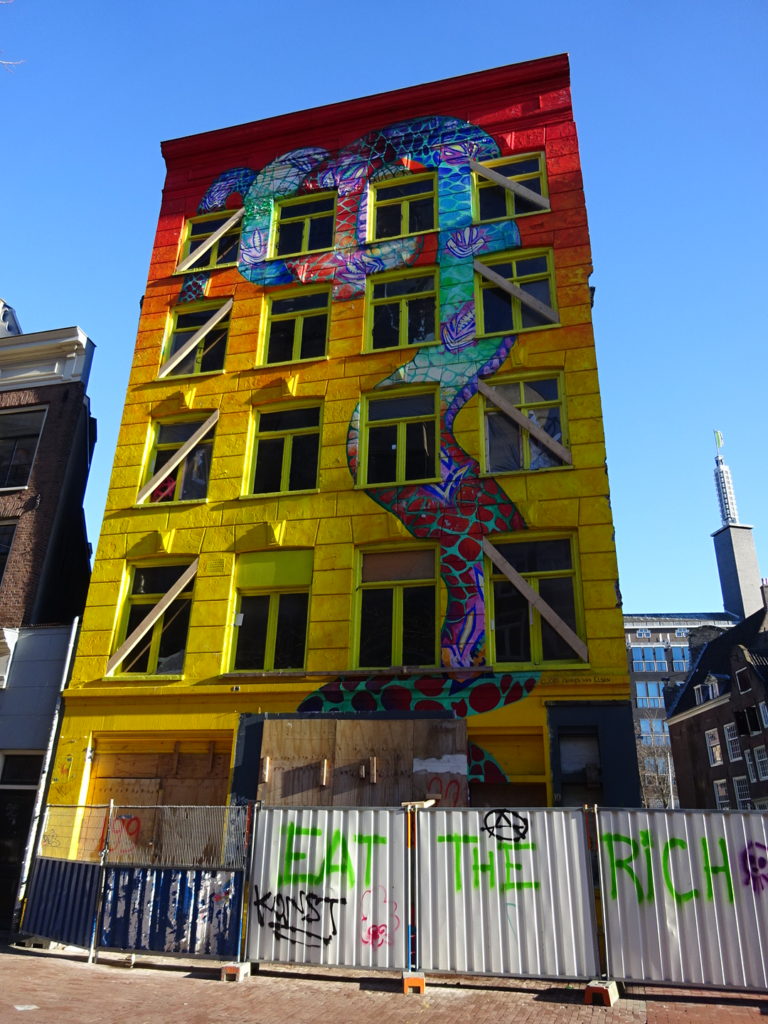 Beautiful, but not for long – most of this block of buildings were being condemned and scheduled for demolition. 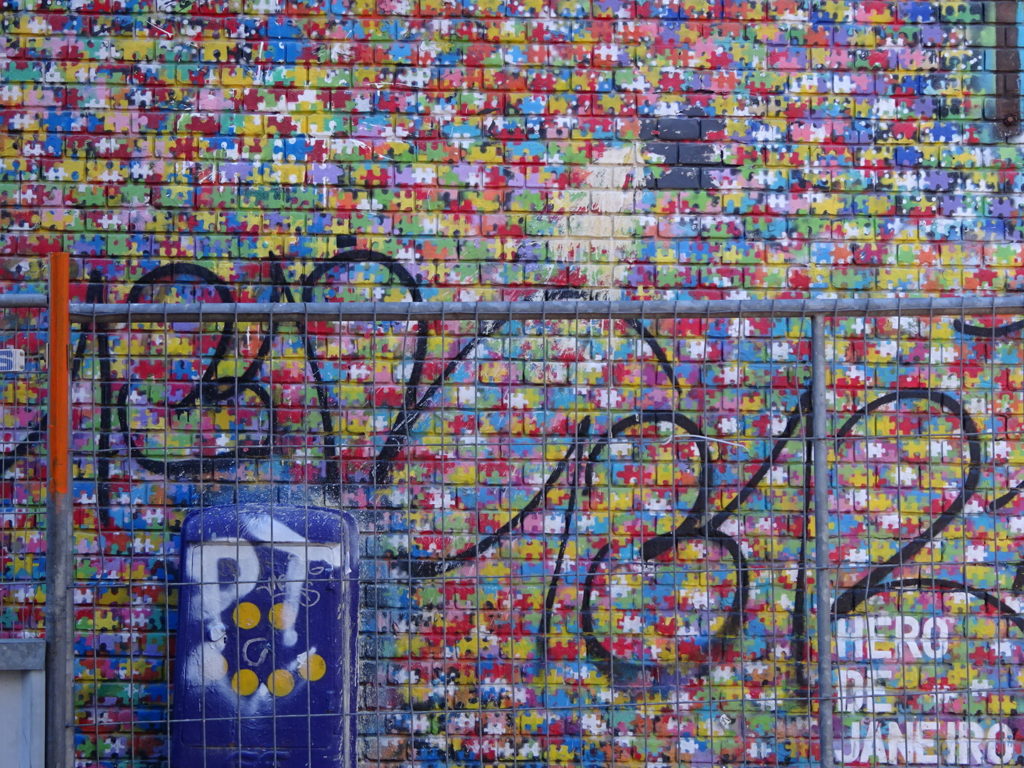 One of the walls that’s coming down. Zoom in to see that all those color swatches are actually puzzle pieces! 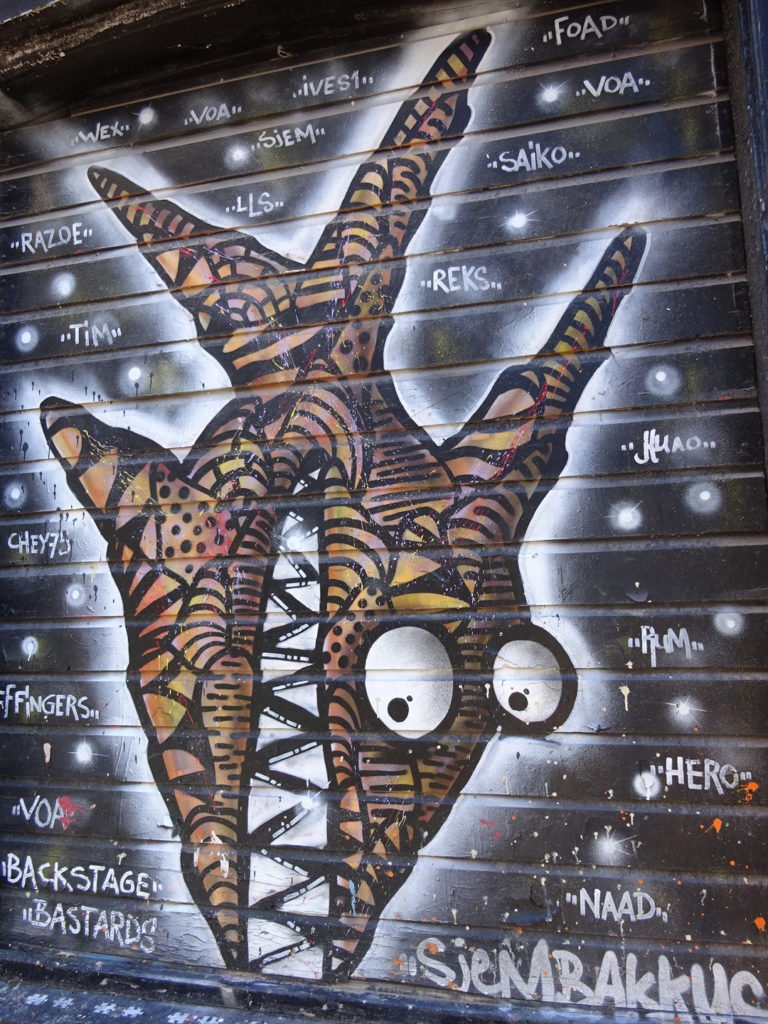 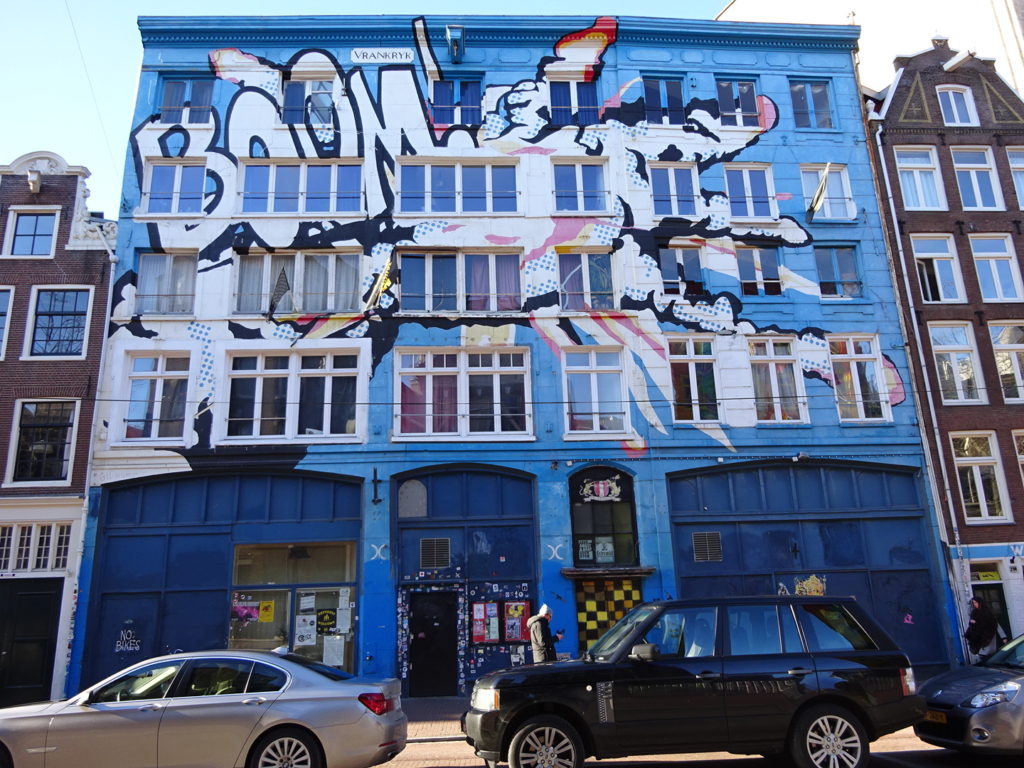 This building was across the street…guess they could tell what was coming!

Below you’ll find what just might have been the most clever piece we saw in the city. I wouldn’t have noticed it if we hadn’t been on a street art tour!

Hint: that’s not a real grate!

The street art tour we did in Amsterdam really took us to quite a few spots we would never have found on our own. The buildings above, for example. If you ever have a chance to do a tour, in Amsterdam or any other city, DO IT! We’ve enjoyed every single one we’ve taken. (Note: our guide, Nicole Blommers, stopped giving tours in August 2016, but she has created an Amsterdam art location map for self-guiding and her website offers lots of info on street art throughout Europe.) 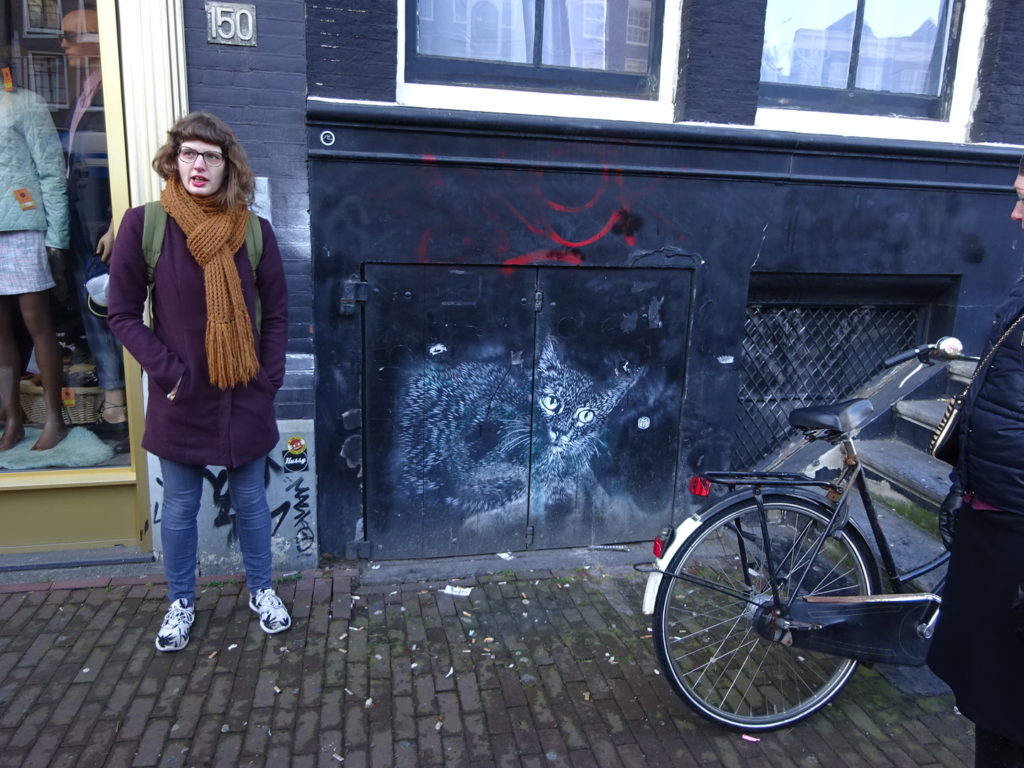 Here’s Nicole, our guide for the tour.

One of the artists we were introduced to was Christian Guémy, a Parisian who goes by the moniker of C215. His style focuses on animals and people and they are really quite incredible.

Now a few other creations for us all to enjoy… 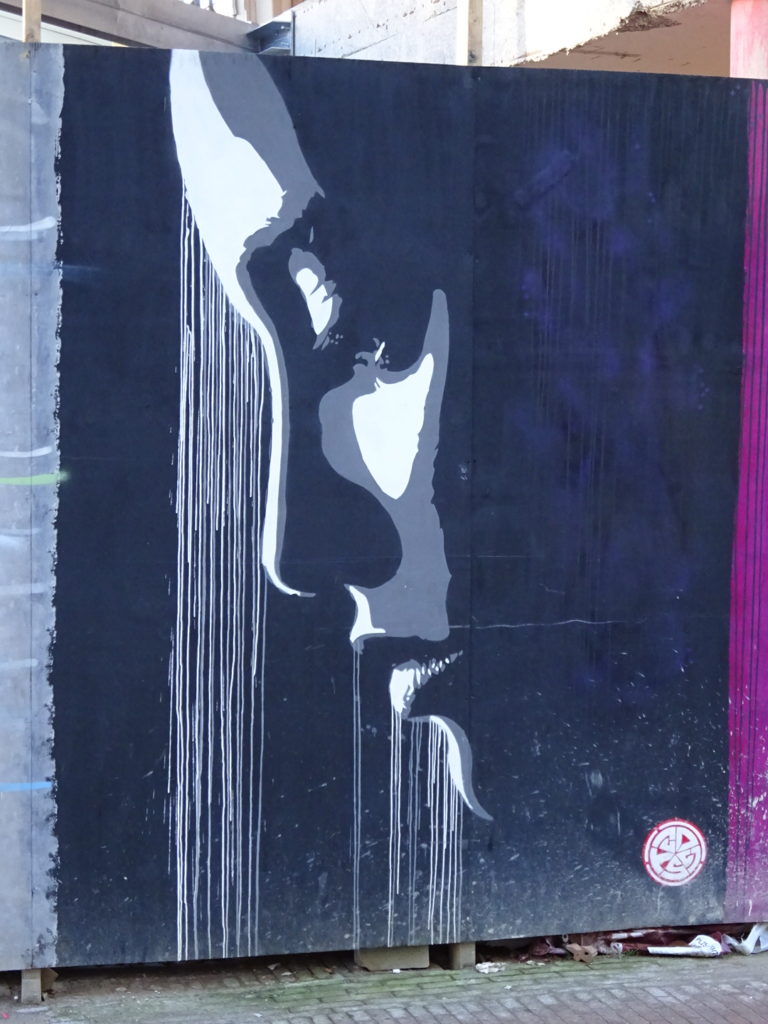 There’s just something about pieces in gray scale that really appeals to me. 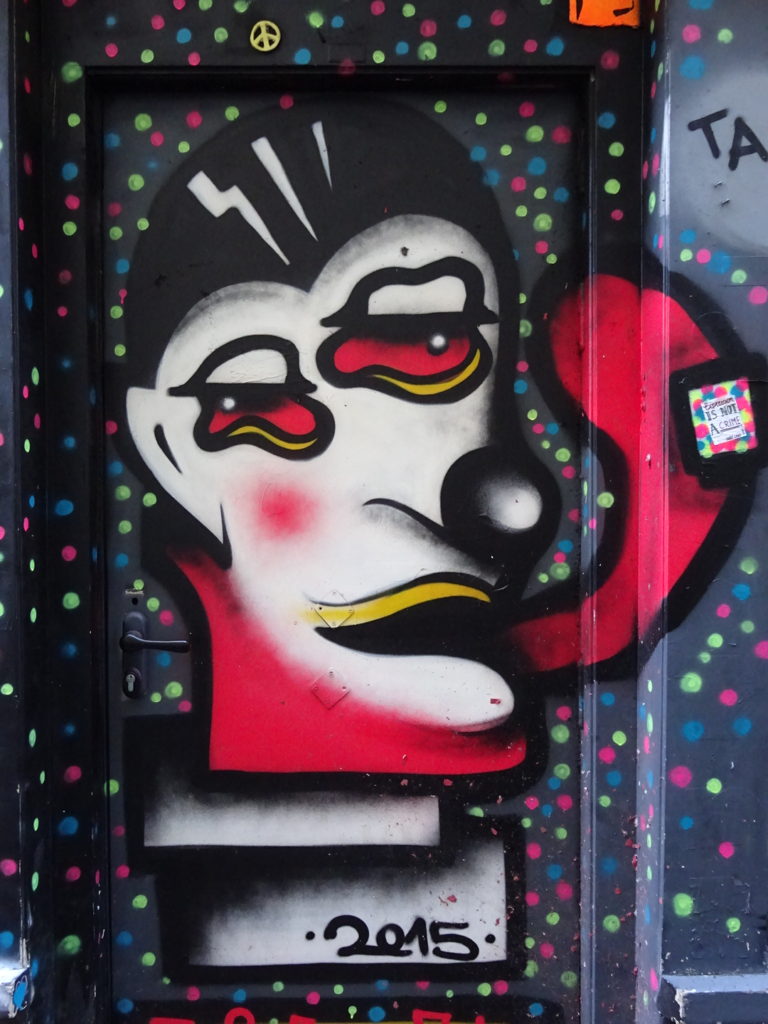 Based on the color palette, I’m guessing this might be the same artist as the clown in my previous post. 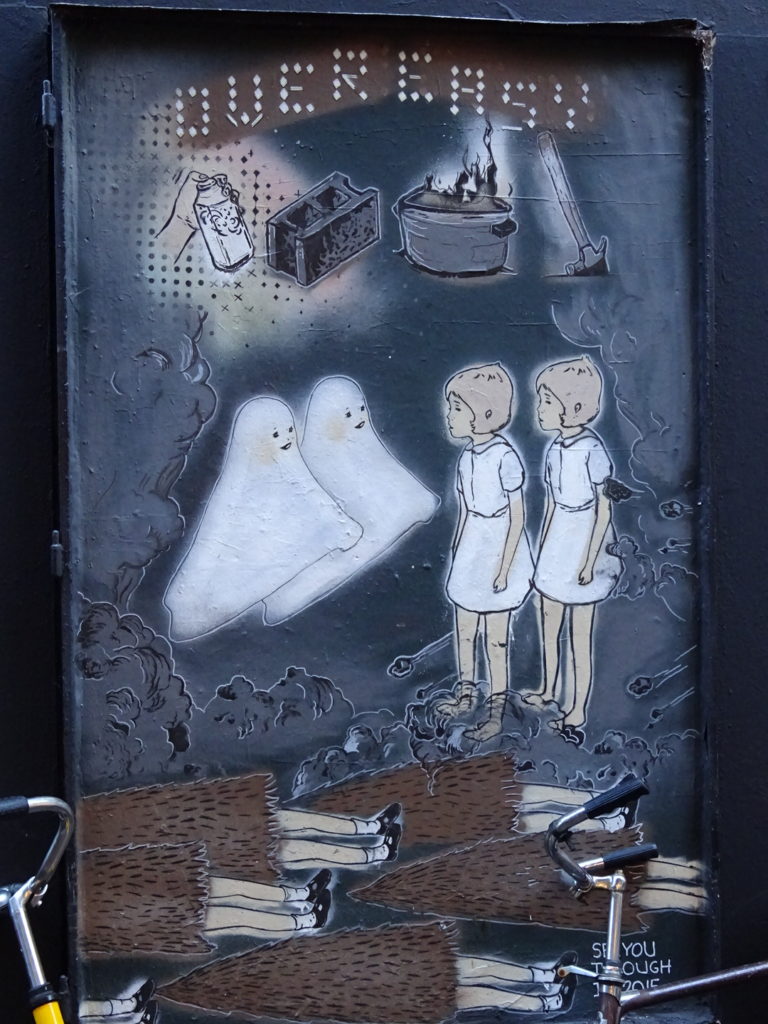 May I suggest a fine ghost costume for Halloween? 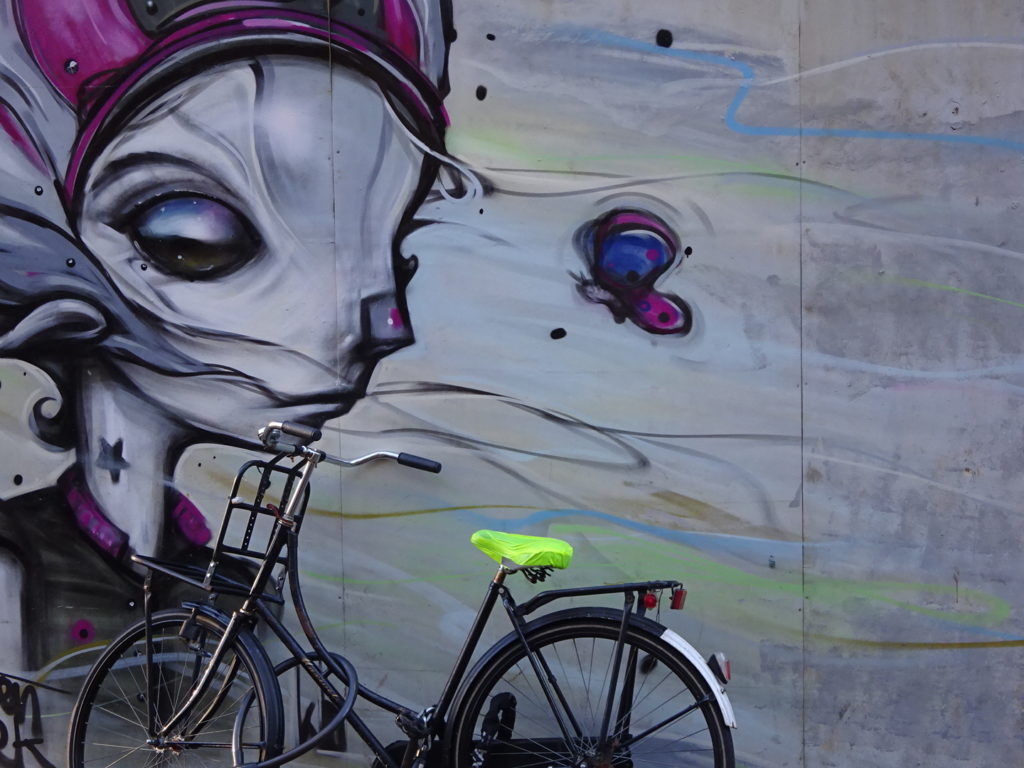 Notice how many photos have bikes in them? That’s Amsterdam for you!

The number of designs incorporating text in various ways seemed more prevalent in Amsterdam than in other cities. 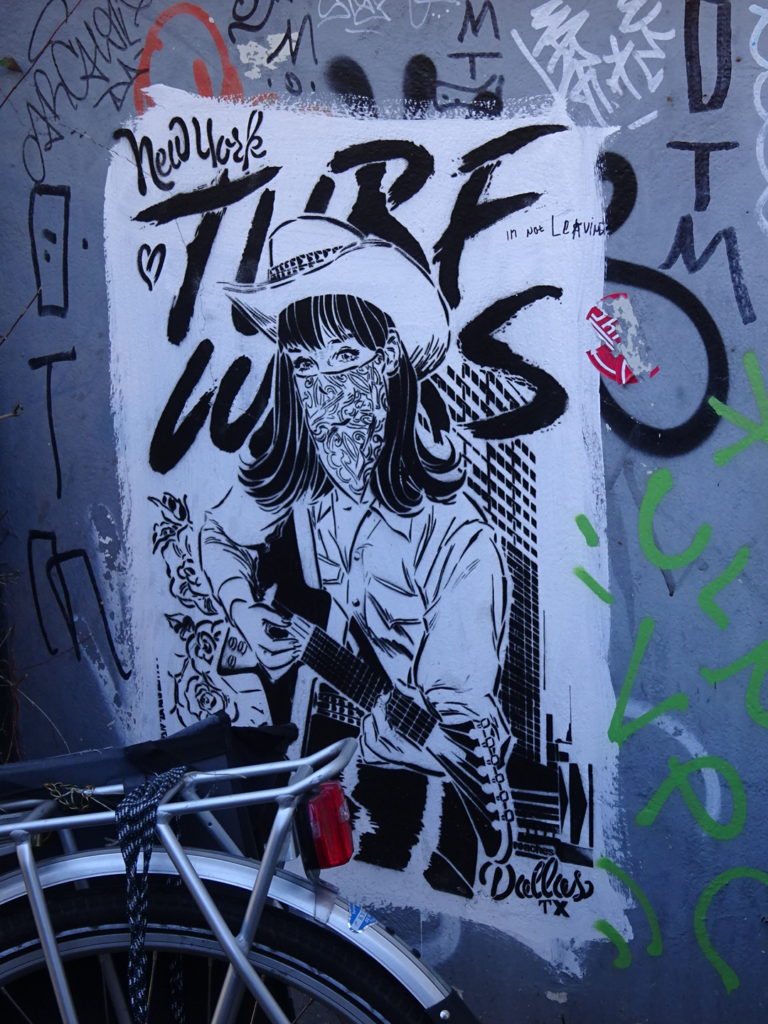 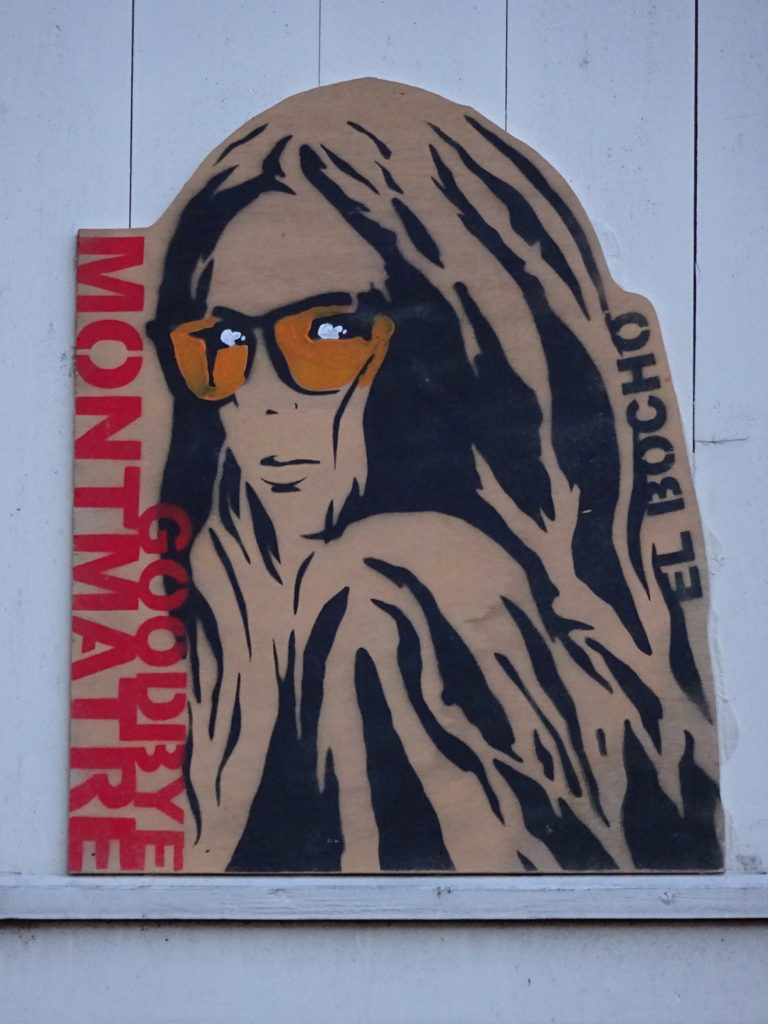 El Bocho, from Berlin, is known for his female portraits. 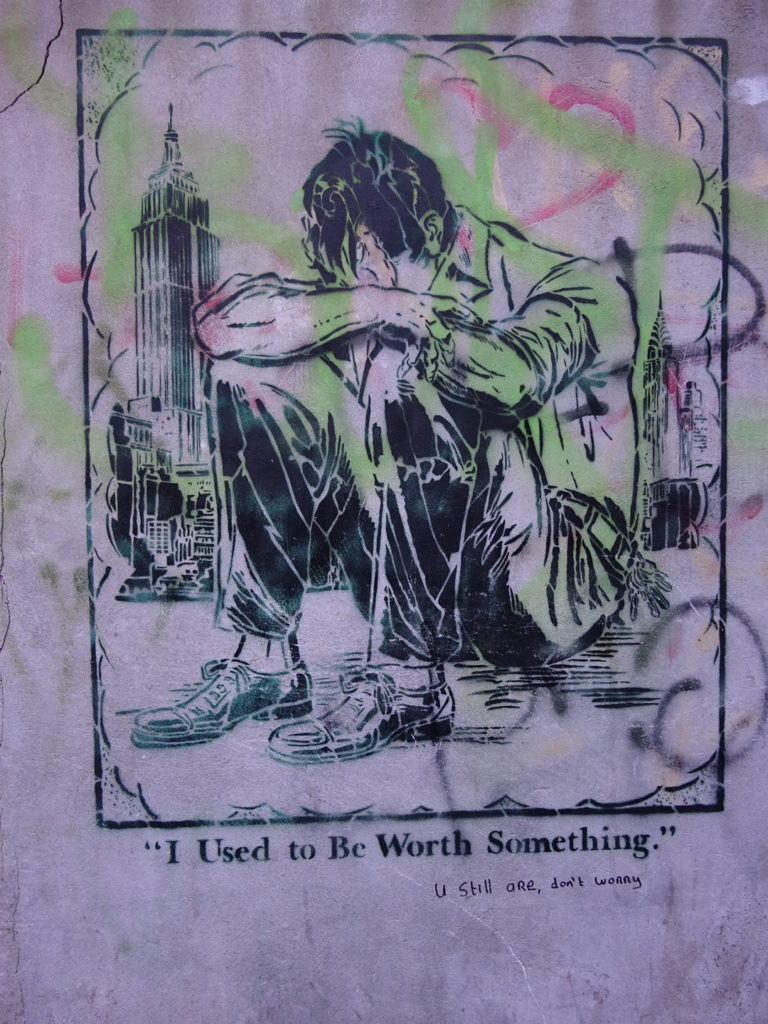 This was hidden in a way, way back alley which we’d never have chanced walking down if not for the tour. Love the additional affirmation. You’d never find that on a piece in an indoor art gallery! 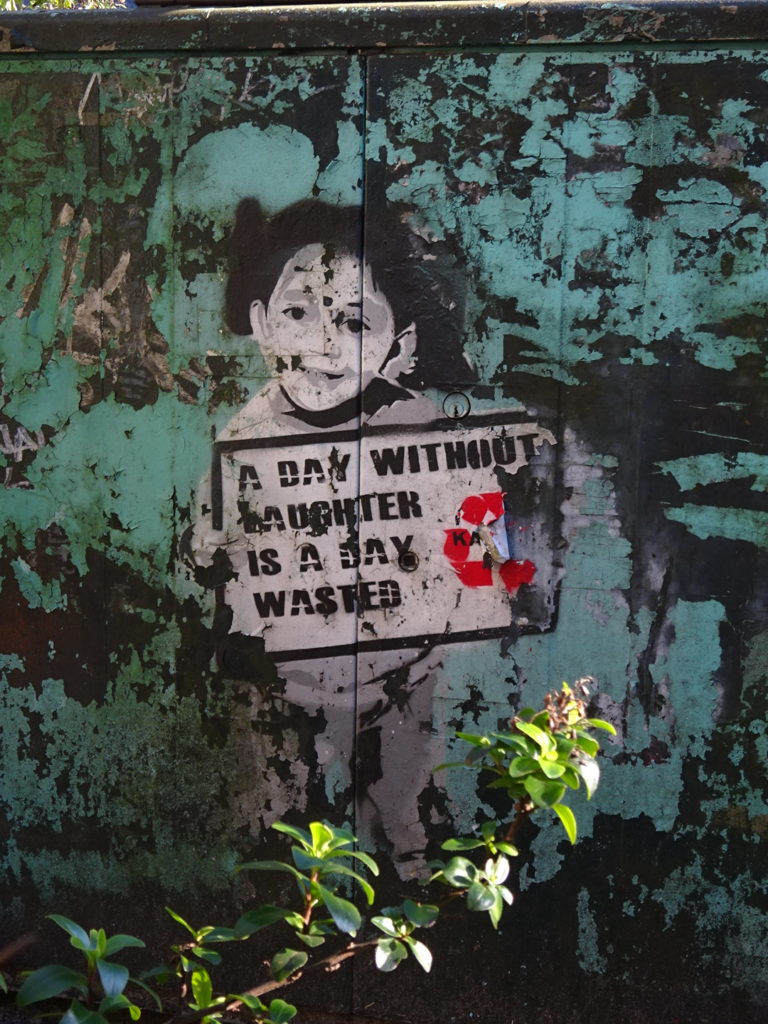 A Day Without Laughter Is A Day Wasted – this is a Banksy piece that is slowly wearing away. It’s actually a girl with pigtails though it now looks more like a little boy.

And I think I’ll end with a few more pieces by the lovely Alice I introduced you to last post. Enjoy! 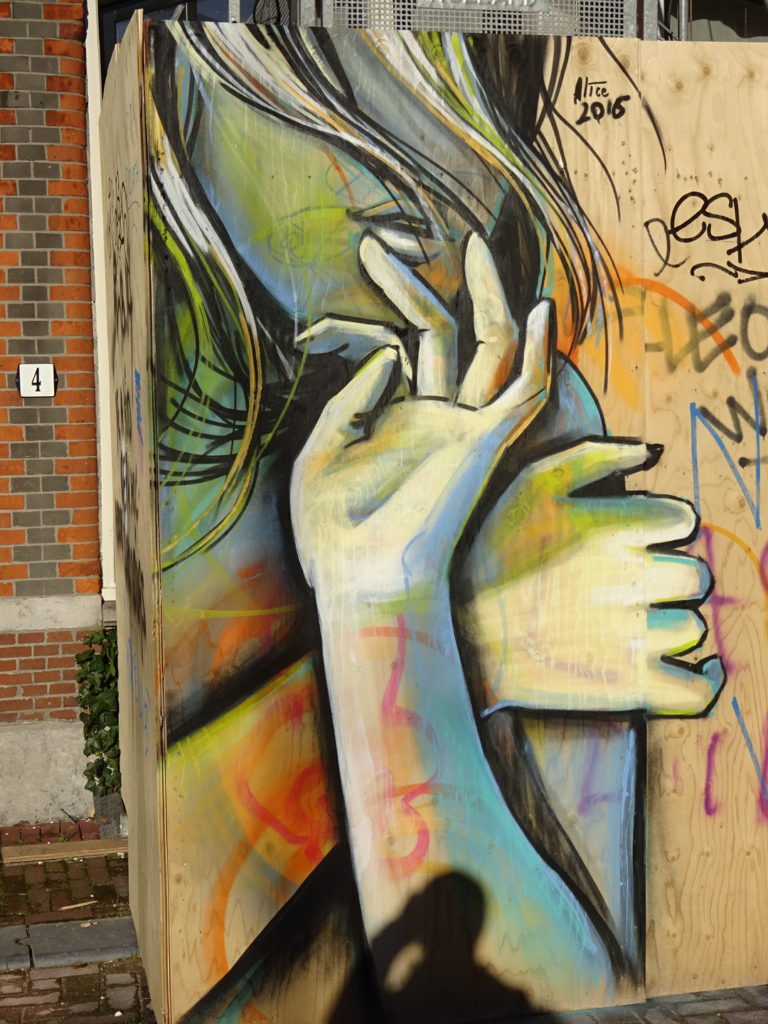 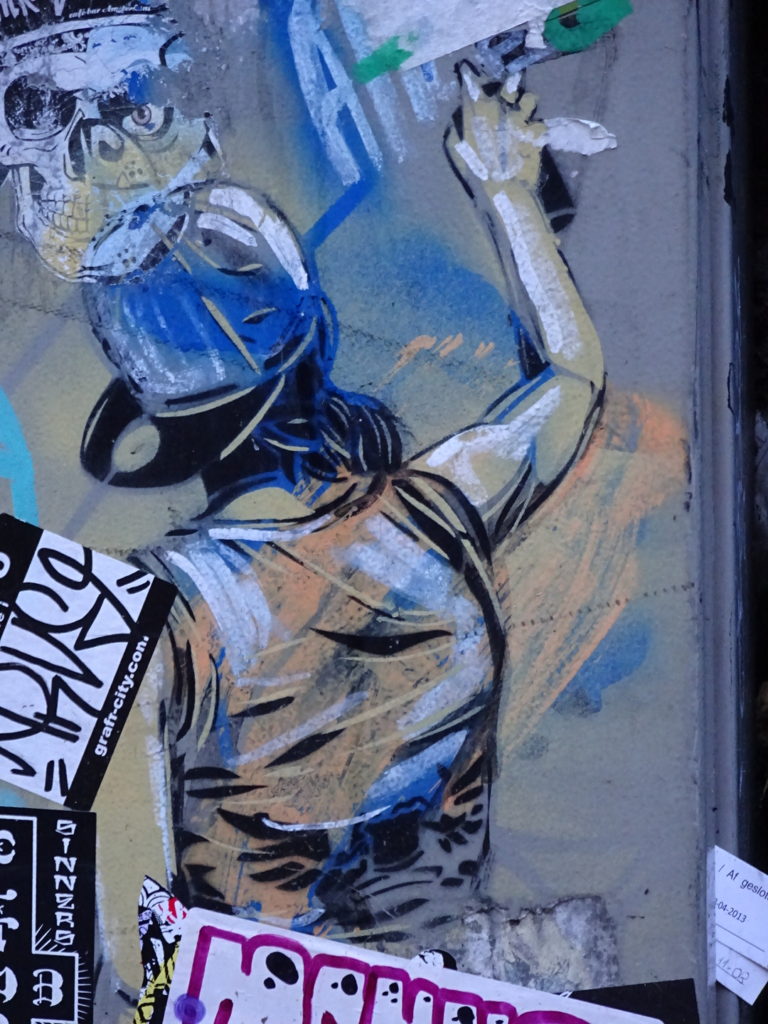 Stickers may be covering her, but Alice’s self-portrait is still mighty cool!

« Aaron Paints Some Walls … And A House!
Whidbey…here we come! »