Chicago on a Whim

Back in July it was the perfect storm: I was quitting one job to take another, our 10th anniversary was the following week with Aaron’s birthday the week after, and we had two nickles to rub together. It practically screamed “Road Trip,” but I had more in mind.

I wanted to secretly get out of my work contract a few days early, make all the arrangements and then wake Aaron up one morning with “Pack your bags, honey, we’ve got places to go!” It’s my goal to actually do that some day, but this time the pressure got to me… I was finding it very hard to lie about my contract end date. It was enough money I wasn’t confident spending it without committee approval. How do I keep it all a secret? It was just too much. I broke. Running outside where Aaron was watering the flowers, “IwanttosurpriseyouandtakeyoutochicagoandseehamiltonandorderroomservicesbutIcantspendthemoneywithoutcheckingfirst!” Aaron looks up, totally shocked, “We’re going to Chicago!?”

Now we can begin.

Day one in Chi-town found us reuniting with my high school bff, Lisa and her hubs. If you remember from back a few blogs, Lisa always ends up in the same city as us the week of our anniverary…even including Cape Town, South Africa in 2015. This year we were in jeopardy of not being able to celebrate as she had no plans to be in Seattle. Luckily, this time we found her! Year 10 was officially acknowledged.

We started the festivities with Chicago’s famed Architecture Boat Tour. As the number one thing listed by literally every single person we asked for Chicago recommendations from, we had high hopes. AH-MAZING! So many architectural styles represented along the Chicago River.

Everyone on the boat. A little rainy, but that just felt like home.

Neat old bridge house. A person used to live/work here and was in charge of raising and lowering the drawbridge as needed.

Post-boat we headed off on a bit of a walking tour that took us by the ALA headquarters. As far as I’m concerned Lisa is a rock star librarian, second only to Seattle’s own Nancy Pearl. So this was a must do. 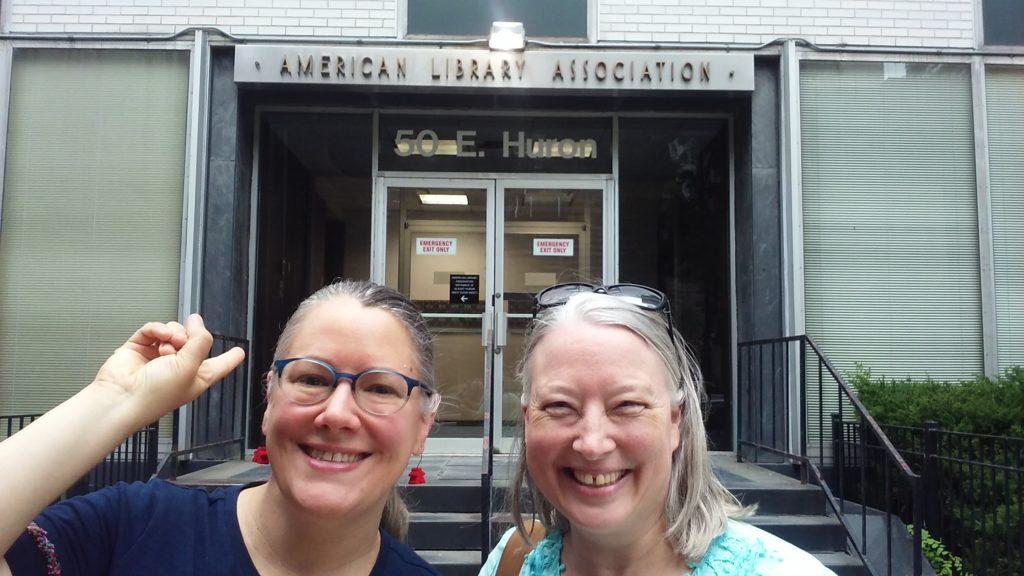 Lisa said “If you get the chance, walk through the old Marshall Fields, now a Macy’s, and look up when you get to the jewelry area.” Umm…ok. Holy smokes!

Tiffany ceiling in Macy’s (used to be the old Marshall Fields).

Not bad, eh? What else does one see in Chicago? The Bean!

Oh those reflections! And what a skyline!

We enjoyed it during the day but then a friend posted on Facebook that we HAD to see it at night, so off we went again. She was so right!

Reflecting the building lights under a full moon…perfection.

Gotta say, the Bean at night was pretty much magical. So much cooler than you think it might be.

Just a little ways over from the sculpture I stopped and looked around and then pulled up Obama’s victory speech from 2008 on my phone. Yep, the Bean is situated in Grant Park right near where Obama spoke. I thought about the history that was made that day. I also loved listening to a politician speak in complete sentences with a positive world-view. That was refreshing.

We tried to find affordable Hamilton tickets, but no luck. Afraid $5-800 for two tickets was just out of our budget, so what to do that would still be super fun? How about Second City…the improv training ground for so many funny people – from Tina Fey to John Belushi to Alan Alda to Dan Ackroyd…the list goes on and on. We went to a show at the 3rd stage and loved it so much we went back the next night to see the show on the 2nd stage. It was all sketch and improv that made me double over laughing. Such talent!

Finally, we wanted to do some not-so-commonly-touristy stuff. Aaron led us out of downtown on some very long walks and through more than one alleyway. That’s what you do when it’s street art time!

Yes. I followed him to the trash can-filled, smelly, nasty alley. Cuz I really like him.

I think the same can be said of Chicago’s street art scene as Second City’s improv: such incredible talent, indeed! I’m leaving the street art post to Hubs, but let me say, I’d happily go back just to wander the streets with him again. It was great!

Our favorite coffee and snack place had it’s own Goddess.

Suddenly it was time for one last coffee (and a dessert treat for Aaron!) before heading back to Seattle. My new job was starting a couple days later and it was time to turn another page. One quick Chicago visit in the books! We’re home in Seattle again now, but don’t you worry – we’re traveling internationally again next summer, so stay tuned!

« The Wearable Art Creations Continue!
How a Sketch-A-Day Saved Me »